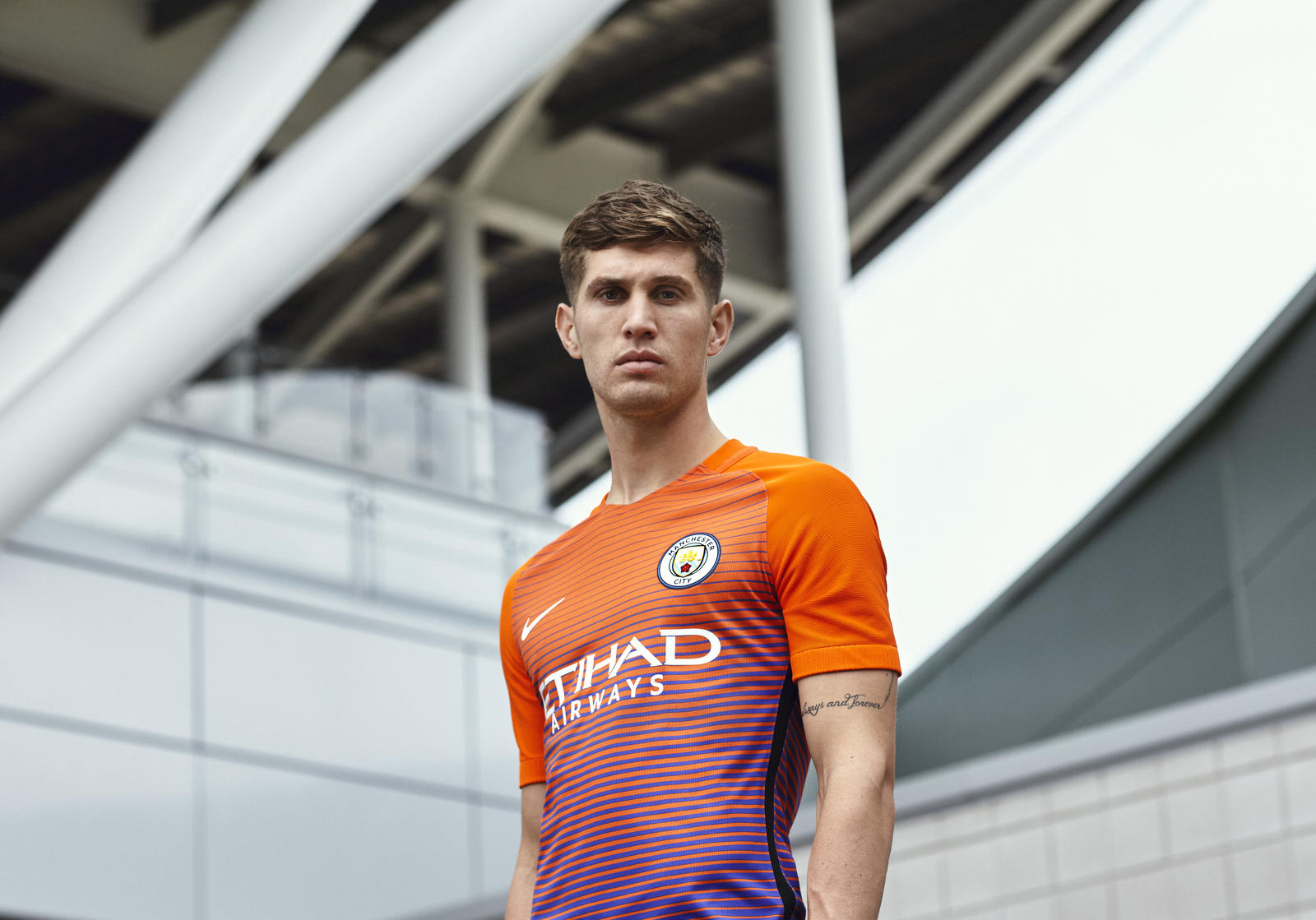 Manchester City’s dynamic rise reflects the city’s status as a hub for music, style and sport. As the club looks ahead to an exciting season under the stewardship of new manager Pep Guardiola, players and fans share a sense of enterprise.

This ambitious approach to the game has taken the club from playing lower league football at former ground Maine Road to taking on Europe’s elite both at the pristine Etihad Stadium and across the continent.

Nike Football reveals this vibrant club’s third kit for 2016-17 and shines a spotlight on the characters who define the shirt.

Having made his debut in Europe’s elite club competition, John Stones has quickly adopted Manchester City’s ambitious approach to continental football. “If you don’t have the mentality that you can go and win it, you’re never going to,” he declares.

He eyes face-offs against the likes of FC Barcelona with excitement and pride, and his drive to improve is evident. “Always testing yourself against the best is the way to get to the level you want to," Stones asserts. "Going up against the best makes sure that you’ll improve.”

Manchester City fans have quickly made an impression on the young defender and with a win in his first Manchester derby behind him, he senses a rising excitement around the club. “The atmosphere the fans create makes the games very special and you definitely get an extra buzz from it,” he describes. 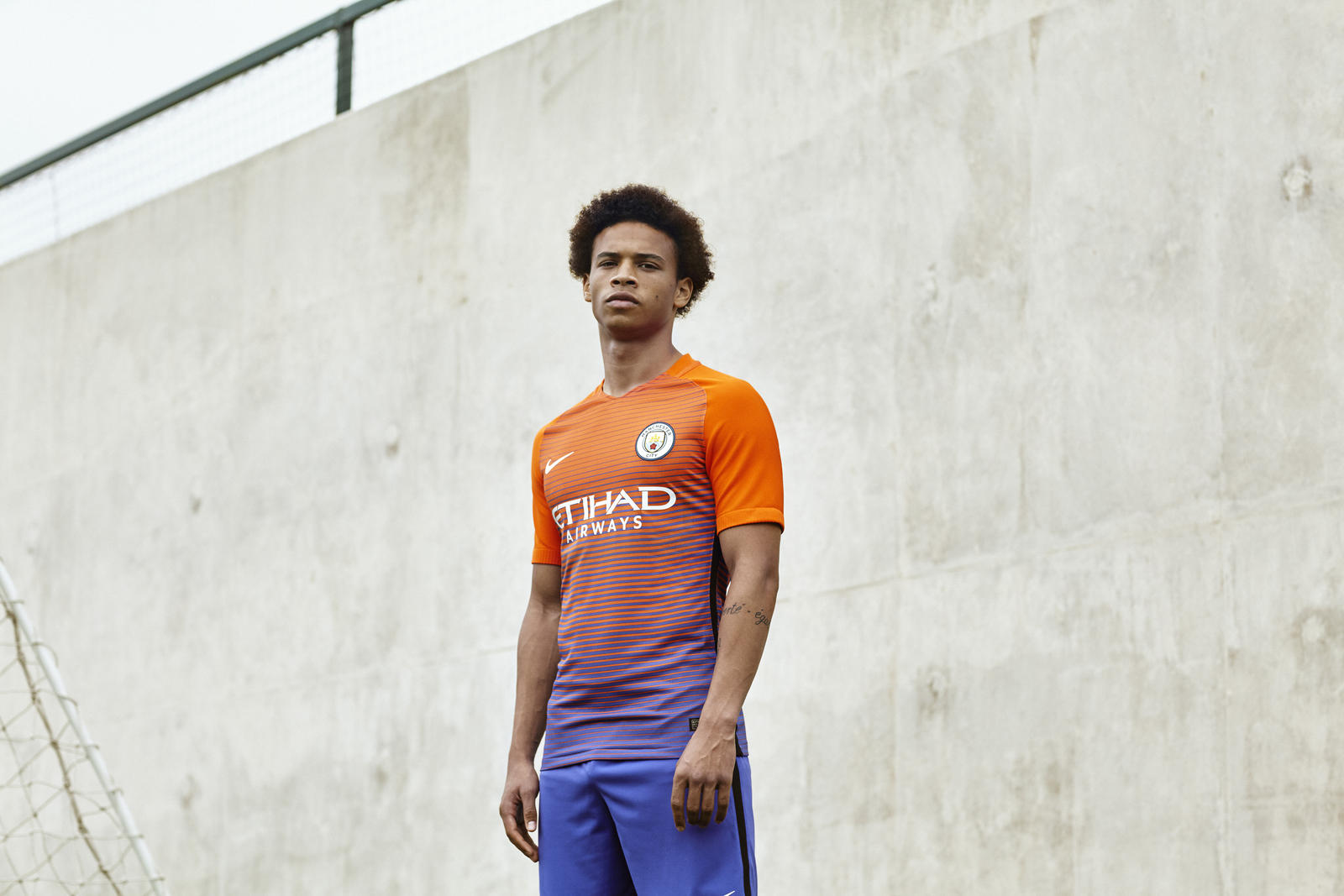 Upon his summer arrival, Leroy Sané was immediately impressed by the scale of the training academy at City and the lively competition amongst teammates. “The team is excited to play under the manager and works to execute everything he tells us," Sané explains. "The competition in training is at the right level and we have fun as well. Everyone is enjoying it.”

At 20 years old, Sané is bristling with confidence and looking forward to testing himself in the league: “The style of play is very different," he says. "It’s more direct, and I like that. It’s an unpredictable and exciting league. Last year proved that, so it is not as clear cut as football in Germany.” 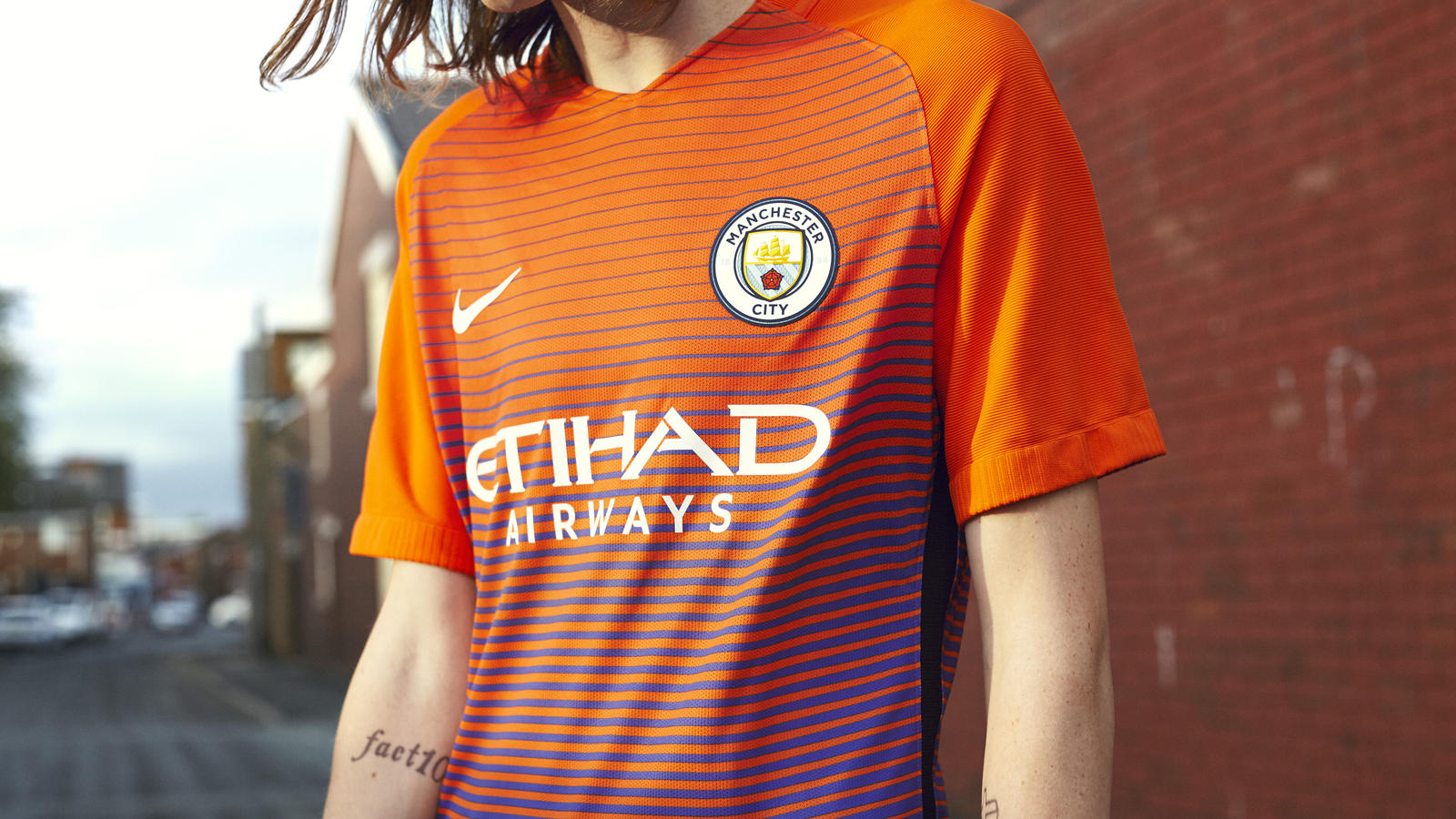 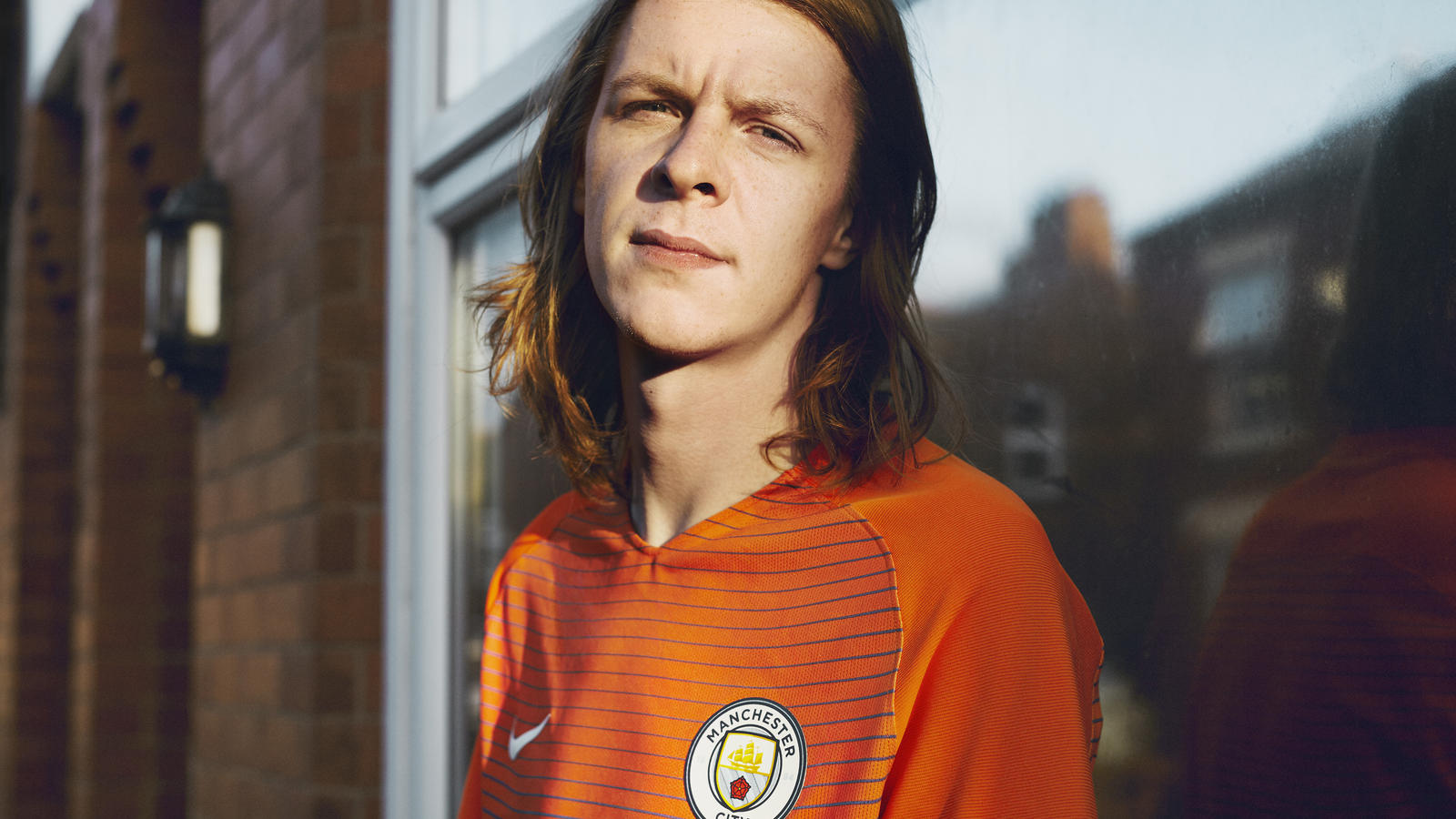 James Faulkner has been a City fan since he was born: “My parents met watching City so I had absolutely no choice," he explains. "That’s the way it should be really, indoctrinated from the word go. It’s a real tangible, consistent presence. Things come and go, life changes, but City is always there and there’s something comfortable in that.”

Manchester City has come a long way since Faulkner went to his first game as a six year old at Maine Road, and he still pinches himself when watching some of the football that the current squad produces. Particularly, he has a deep appreciation for Zabaleta because “He’s a quality wingback and speaks with a Mancunian accent… What more can you want?” 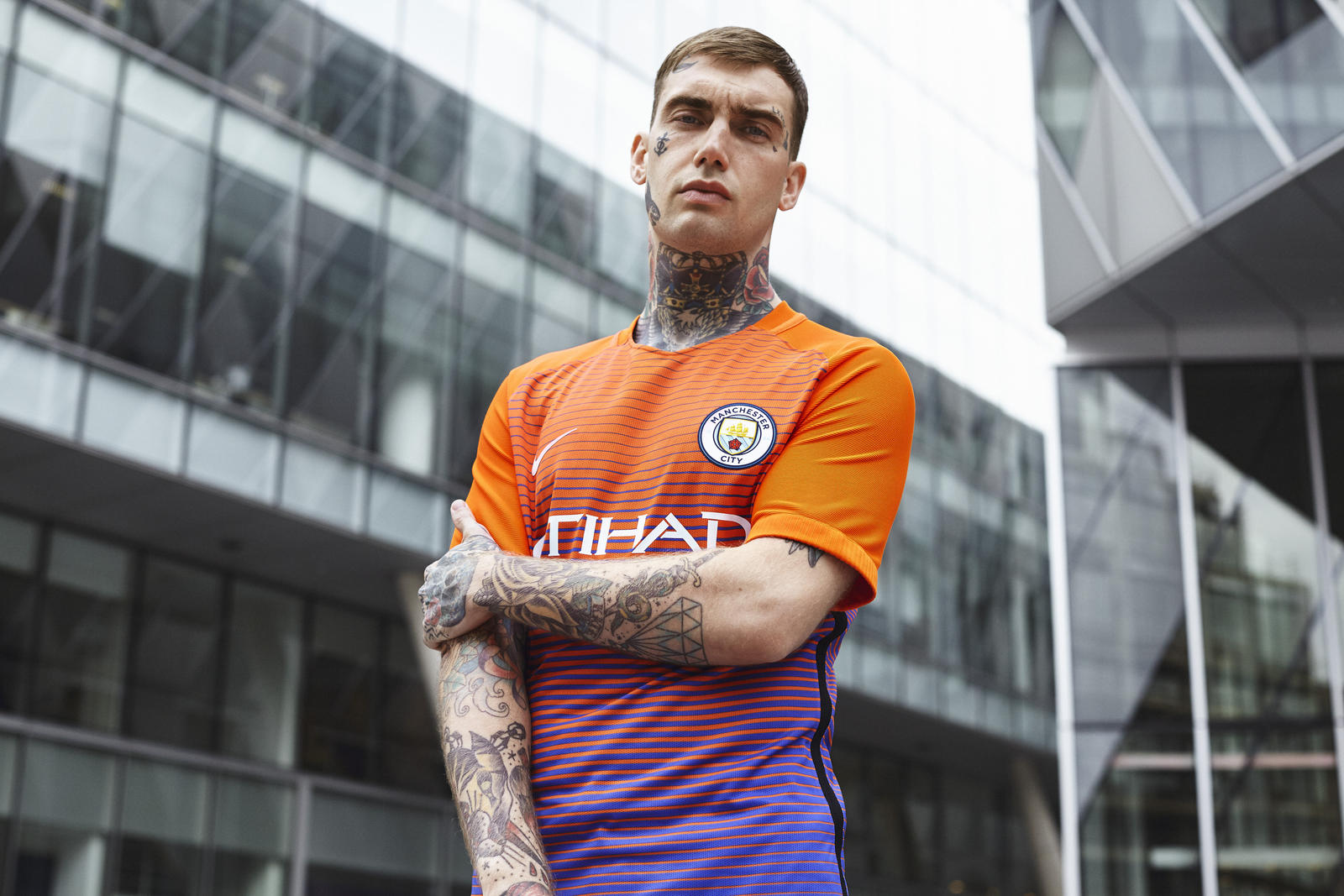 Michael Mayren is Mancunian by birth and an internationally renowned portrait photographer, with a natural eye for street casting his subjects. Having toured the globe extensively for his art, Mayren is now based in Manchester, where he has always felt most at home. “I didn’t realize this and probably took it for granted a little bit," he explains, "but the more I’ve travelled and lived in other places, the more I appreciate it when I’m back in Manchester."

Notably, Mayren enjoys the way football draws people together; he’s made some of his best friends watching City play. That's why he shows his allegiance even when he’s outside of Manchester. “I like wearing the [kit] shirt because I’m such a proud Northerner," he states. "It means you can show people where you’re from.” 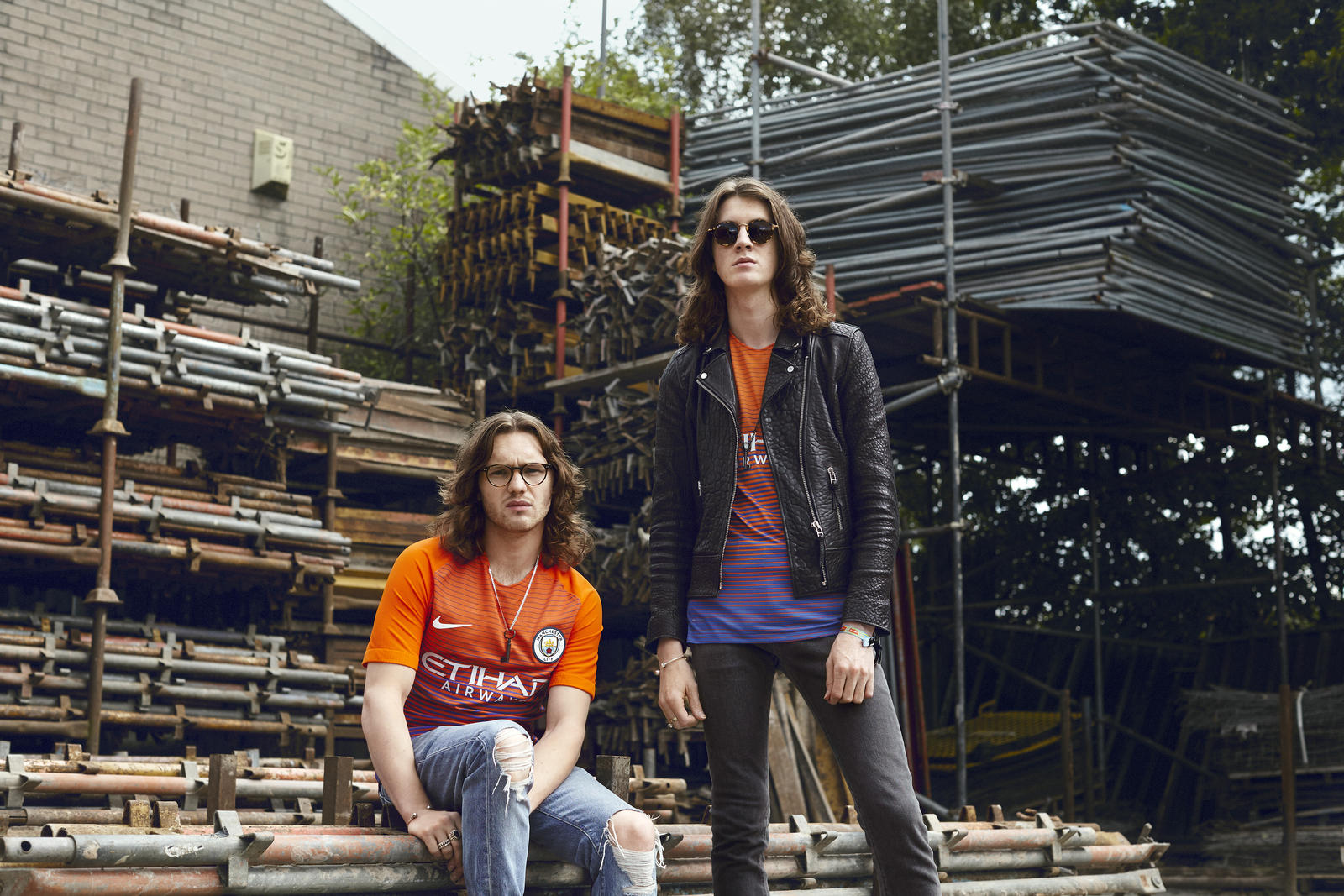 Joe Donovan (above left) and Tom Ogden (above right), members of the band Blossoms, have returned to Manchester after a hectic festival season and look forward to catching up with the club.

“When I became good mates with Tom, we’d go to City together; we had a season ticket for four years," Donovan recalls. "We were there when we won the Premier League for the first time and we all ran on the pitch — all the heights the band might scale will never come close to that. Something that will live long in the memory was supporting The Stone Roses at The Etihad. “We were on stage looking at where we used to sit with our season tickets and everyone was singing our songs back.”

“I’ve supported City all my life and so has all my family," Ogden proclaims. "I got taken to a game in 1999 with my dad and his brothers, an FA Cup game against Burnley, when Paul Dickov and Shaun Goater were the star players. I remember watching the Gillingham game at my gran’s house when Dickov equalized and we went through on penalties. I even had a poster of Georgi Kinkladze on my wall.” 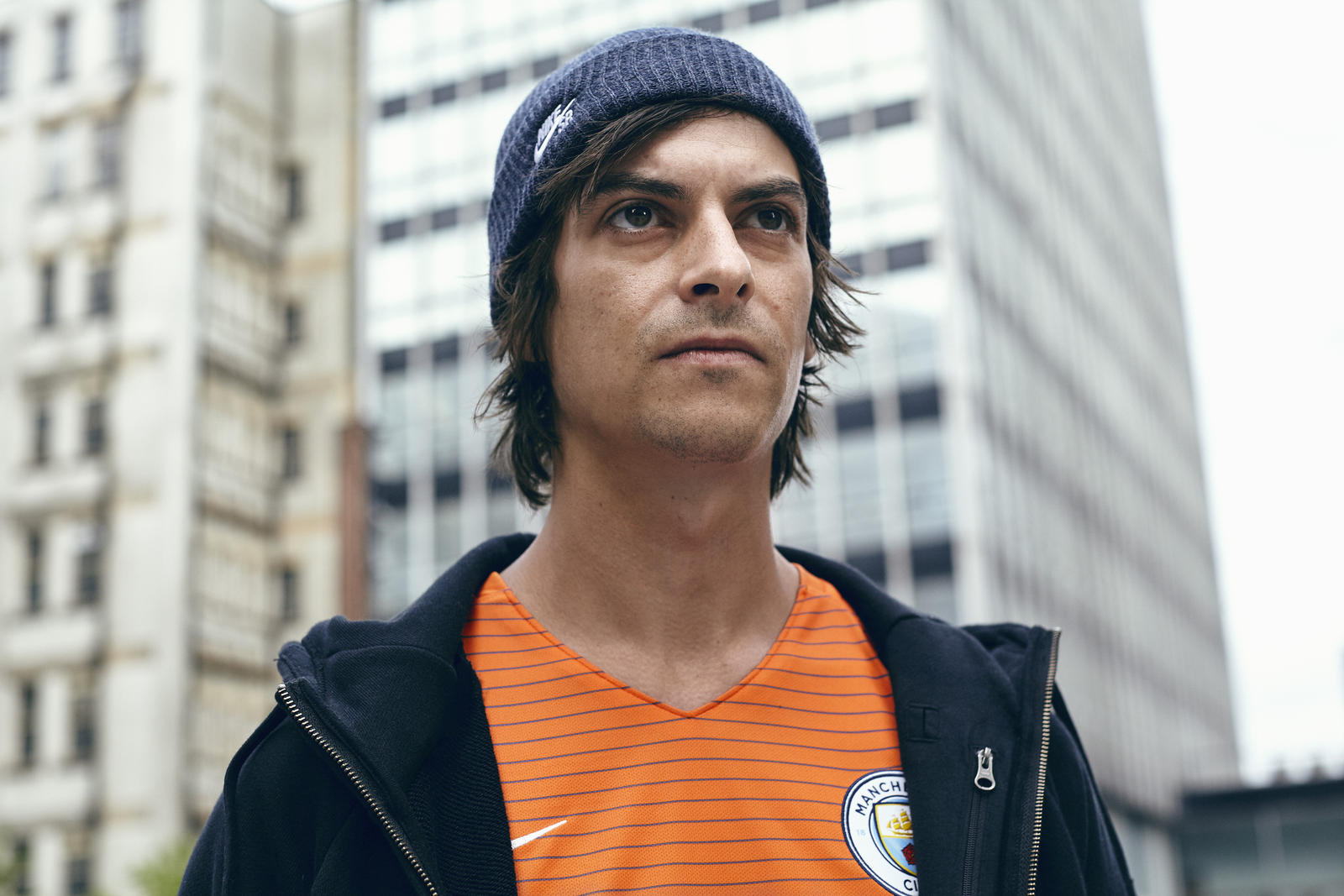 Joe Gavin's dad is a lifelong City fan who grew up near Maine Road, where the two would regularly attend games together. Now a professional skateboarder and member of the Nike SB team, Gavin meets up with other local skateboarders in the Northern Quarter, taking advantage of the accessibility and vibrancy of Manchester. “It’s so good for skating," he says. "You can literally skate from spot to spot, and you don’t have to sit on a tube or sit on a bus for ages. That’s the fun part of it, charging the streets with your mates.” 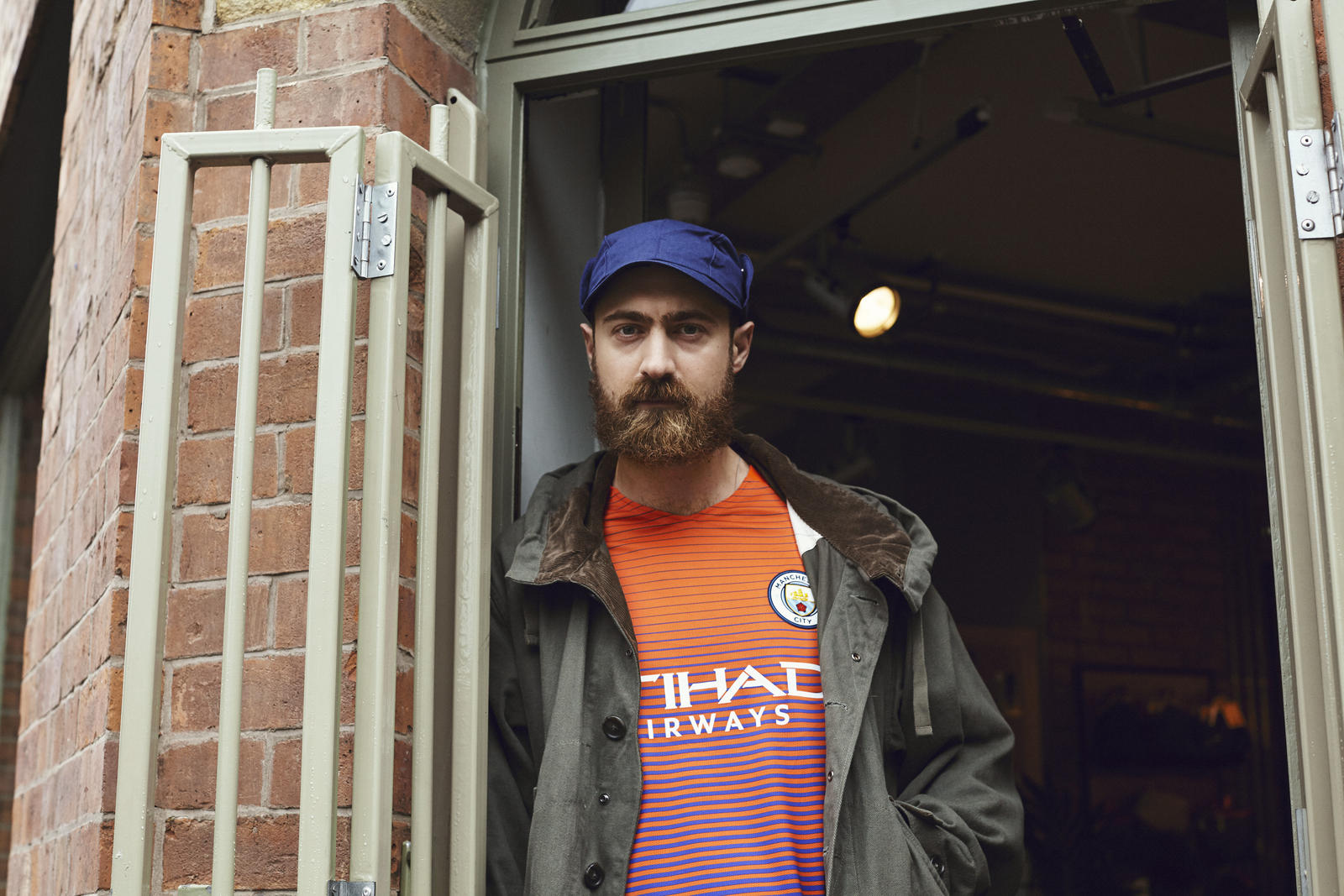 Sharif Reyhani grew up in Salford, a predominantly red part of Manchester, and now works in legendary menswear store Oi Polloi, an institution in the city's Northern Quarter. Following in the footsteps of his grandfather, Reyhani has supported Manchester City since he was a boy. He first watched the club from the Platt Lane end at Maine Road and now has a season ticket in the singing section of the South Stand at The Etihad, where you can hear the new “We’ve got Guardiola” chant ringing out around the ground. 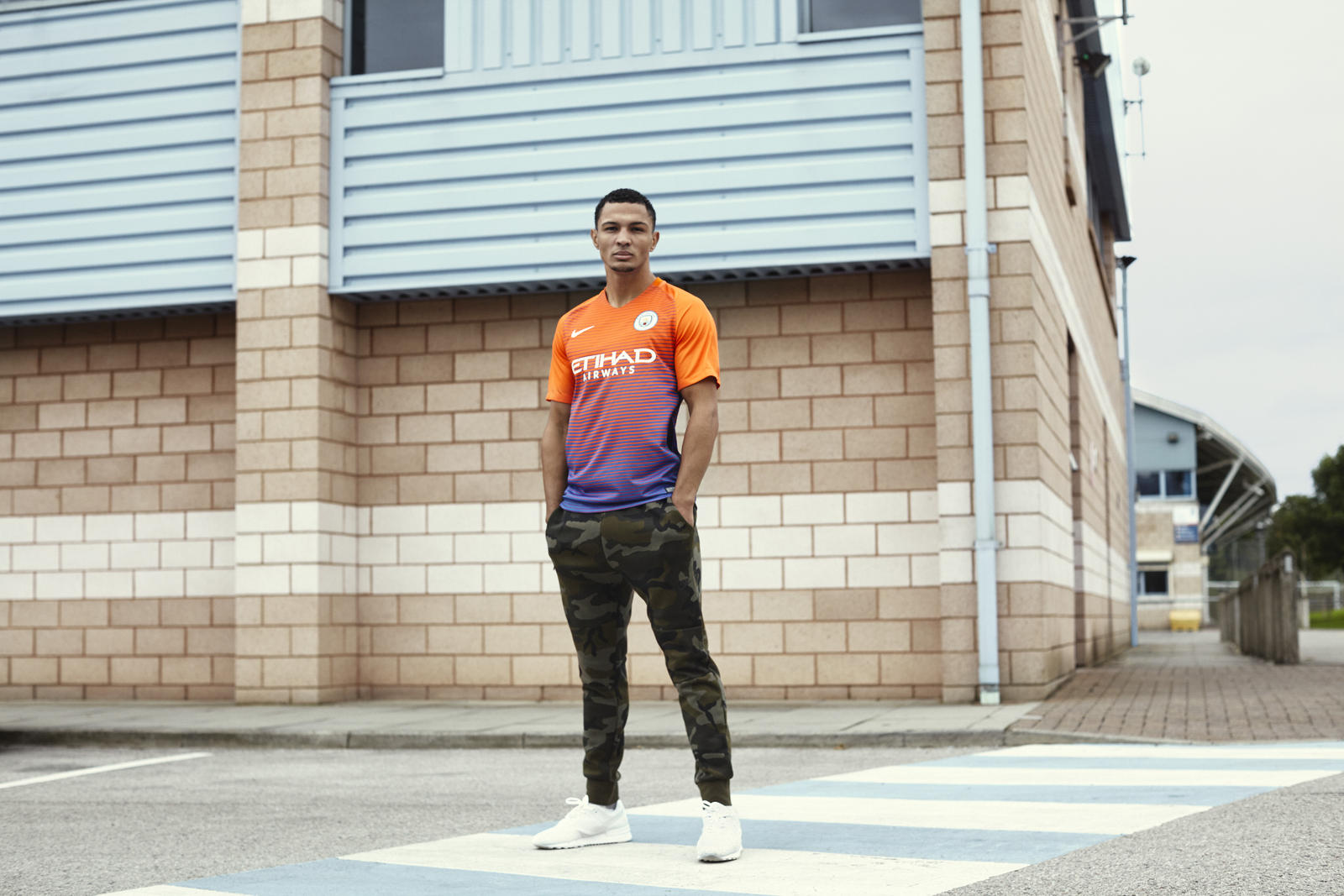 Professional boxer Marcus Morrison has history with Manchester City. A tough-tackling defender in the club’s academy until the age of 16, Marcus would travel direct from the boxing gym to club training at the Platt Lane Sports Centre. Morrison also spent time as a ballboy at The Etihad, something that will always stick in his mind. “The thought of being next to the pitch with thousands of fans, cheering the blues on," he recalls. "I'll never forget that.” Moreover, he also grew up on the same estate as a famous blue: Ricky Hatton. “If I can go on and do even a percentage of what Ricky did in his career," Morrison states, "then I won't have done badly.” 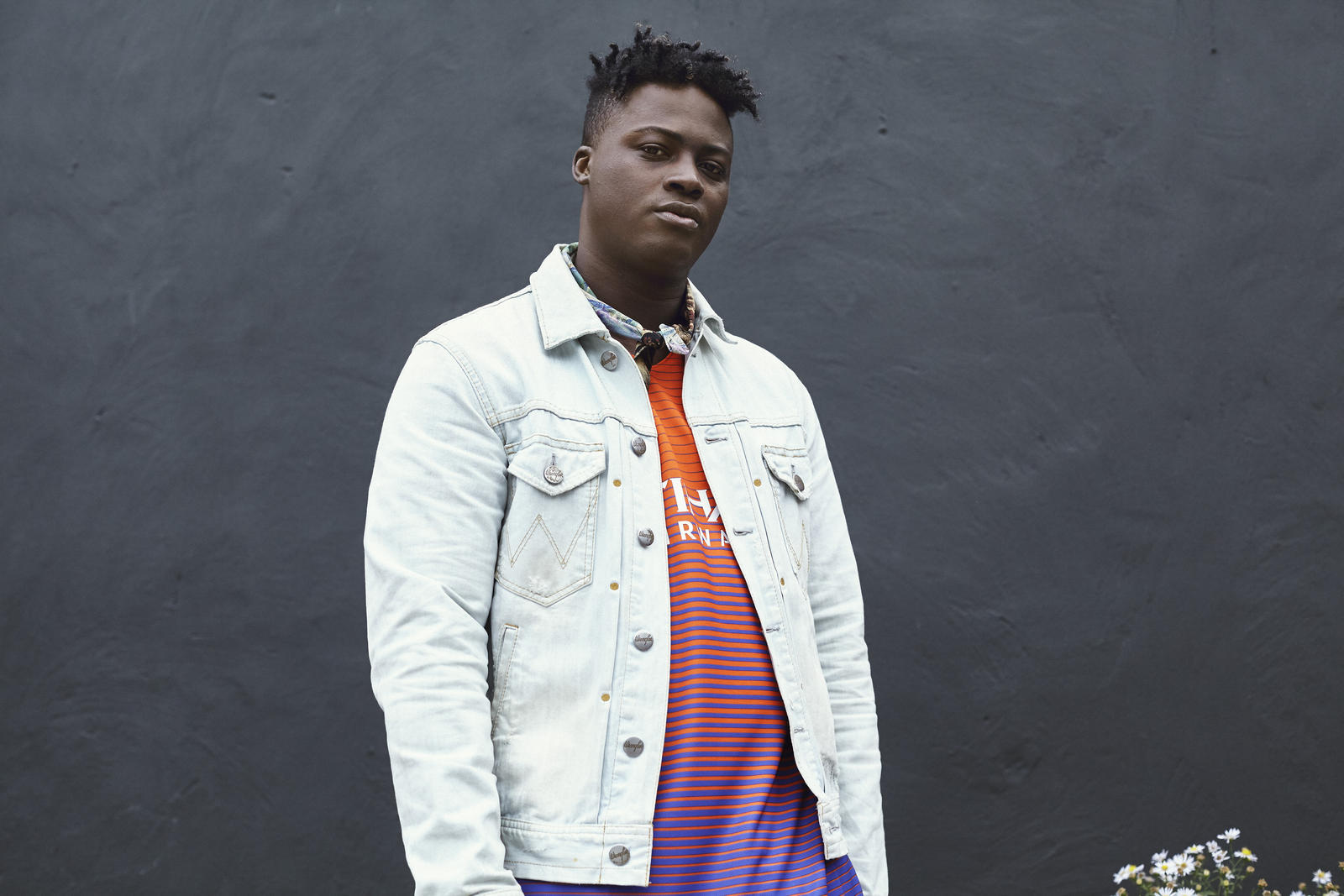 Adio Marchant is a Manchester-based musician known as Bi-Polar Sunshine. "It Was Either This or Football," an EP he recorded with a previous band, sums up the importance of music and football in his formative years.

Having backed City since he was young also means that Marchant witnessed the club's evolution. He was at The Etihad for the epic climax of the 2011-12 season. “That moment will stick with me forever," he says. "There can never be another moment in football like that.” Now that his younger brother, Ashley Smith-Brown, has signed with Manchester City, Marchant has developed an even closer relationship with the team.

One of Marchant’s own crowning moments as a fan was playing a charity match at the home of his club's fierce city rivals, with a Manchester City shirt beneath his kit. “The game went to penalties," he explains. "I took the last penalty and when I scored I took my top off to celebrate, revealing the shirt. I had 65,000 fans booing me. City gave me a season ticket for it!” 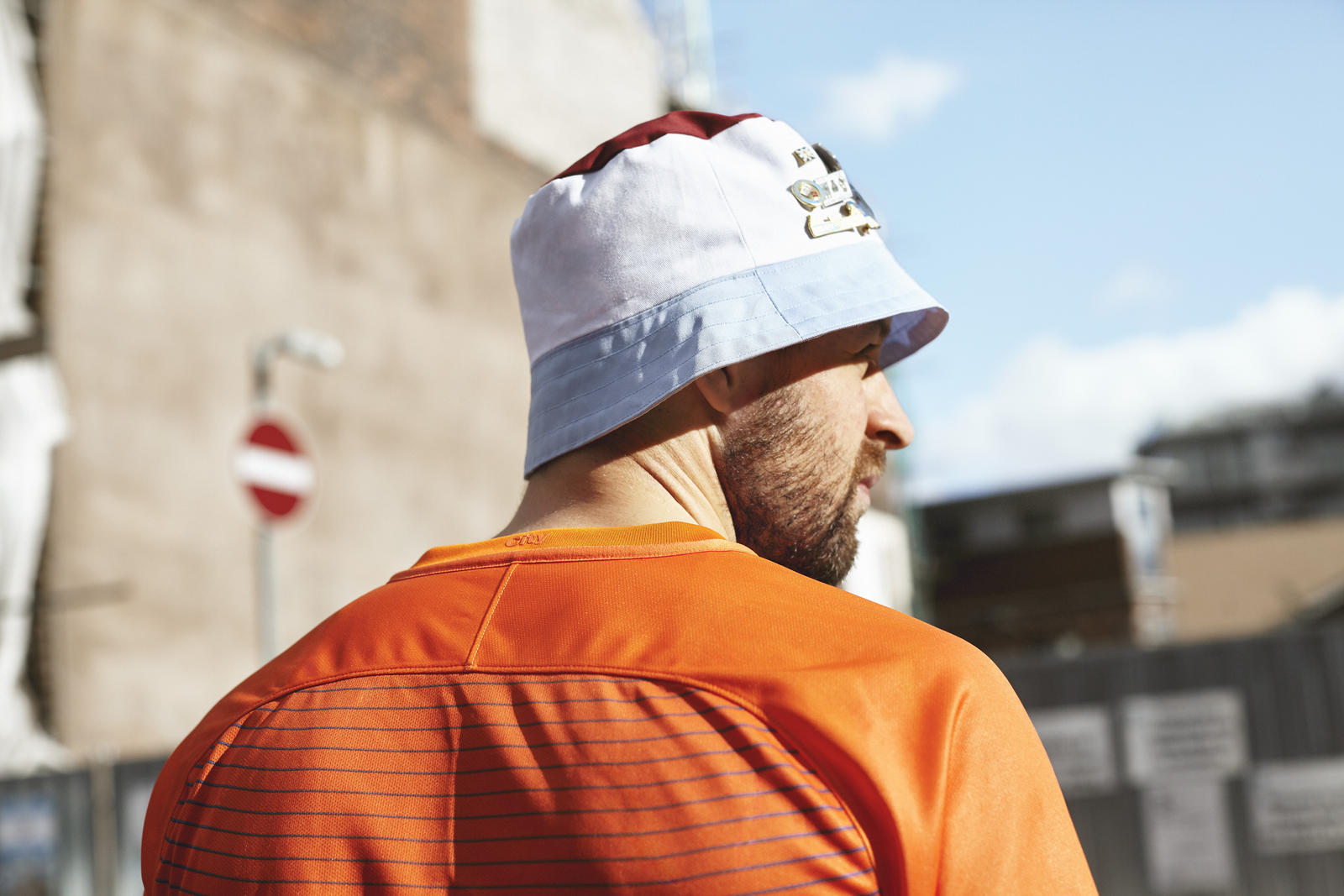 Bobby Graham grew up in Fallowfield, an area of Manchester that also housed Maine Road. “I was born into it," he says. "I was pretty much straight into the deep end as a blue.”

Graham speaks with great pride about the club’s identity, shaped by both lower-division football and the heights currently being scaled. “What goes around comes around, so here we are now enjoying a bit of time in the sunshine," Graham exhalts. "What a journey, all of it. I would not change it for anything.”

This season, Graham is looking forward to following City abroad as much as possible, getting a good spot to hang up his “Fallowfield Blues” flag and watching the team play in this new third kit. “It’s a nice contrast to the normal colors. The third kit is always a bit more adventurous, but these are the kits that stand out and end up famous.” 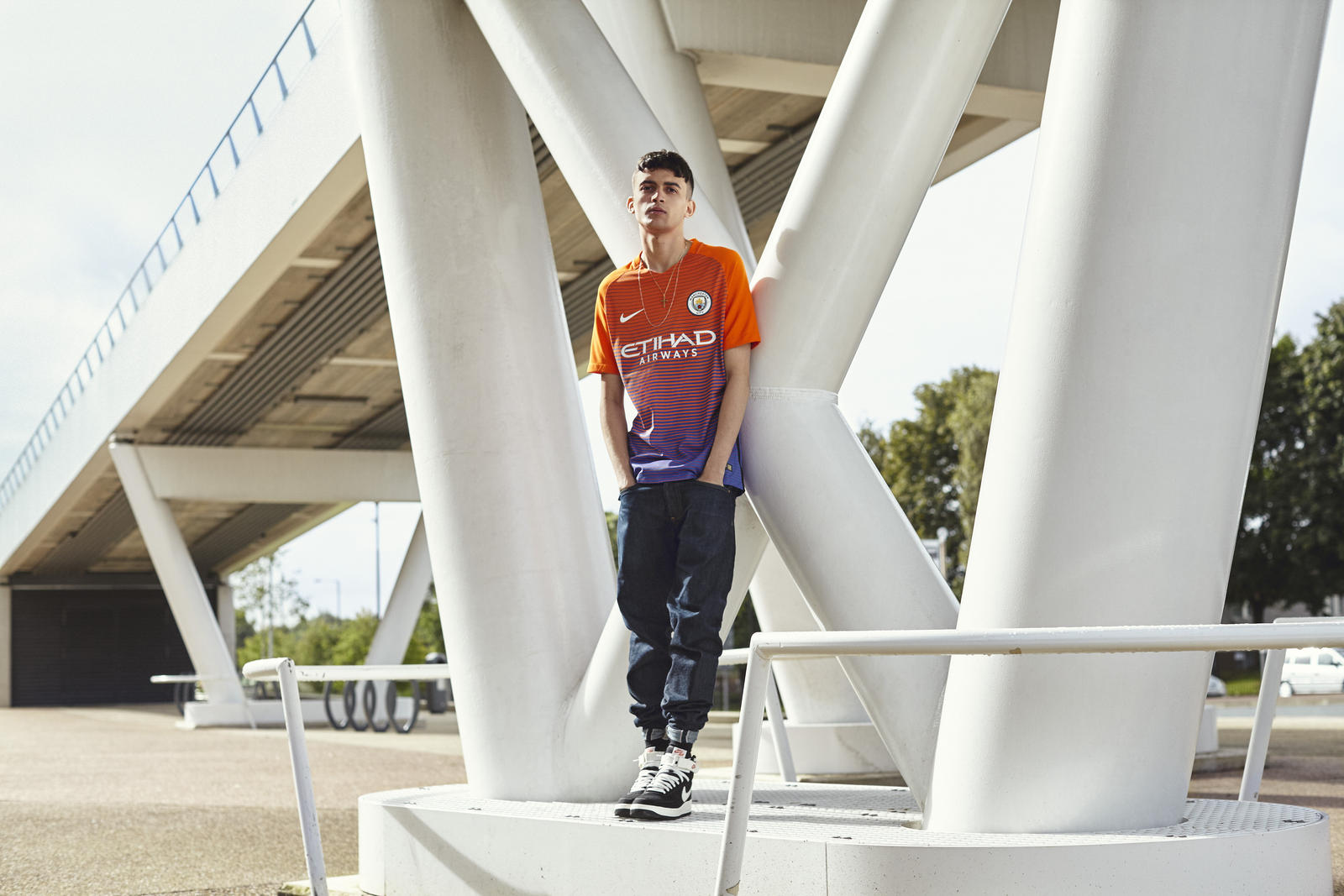 “My family are all blues,” declares Leo Adams. His earliest memory watching City was getting smuggled into Maine Road underneath his uncle’s coat.

This season, this life-long fan can sense a real buzz as the eyes of the football world turn to the city. “It’s coming to the tipping point," he explains. "Everyone’s starting to realize that this is one of the biggest footballing cities in the world. Along with Madrid and Milan, you’ve got Manchester.”

Adams is confident of a good run in Europe, due to experience gained in recent seasons and a new manager at the helm. “I think getting Barcelona in the group stage might be a bit of a blessing in disguise," he says. "It means we don’t get them in the knockout stage straight afterwards if we both qualify. Pep already knows their style of play, so it’s the best time to get them.”

Manchester City will wear the 2016-17 third kit in continental and domestic cup matches. Designed with revolutionary Aeroswift Technology, the kit is available starting September 22 at nike.com and shop.mancity.com.