Introducing the MadeMe and Converse One Star and Apparel Collection 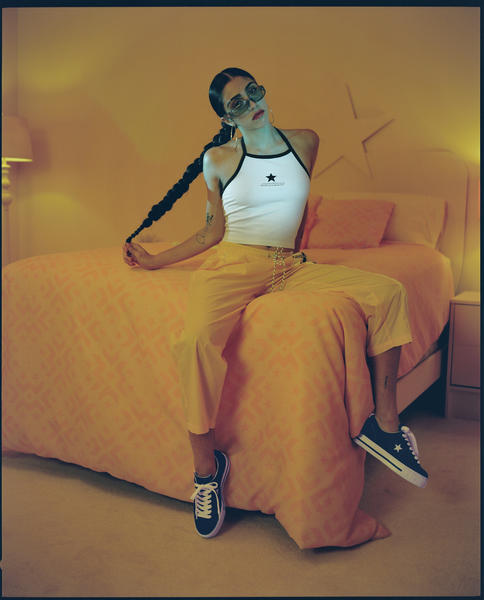 Two months before MadeMe founder Erin Magee got a call from Converse asking her if she’d be interested in collaborating on a collection, she purchased a vintage pair of 90s One Star shoes from a small online retailer.

“I wore One Stars all the time as a teen,” she says. “And I’d been wearing this pair I got recently every day because they reminded me of that.” Teaming up with Converse on its first collaborative streetwear and footwear collection for women was a no brainer for Magee.

When Magee went to her first design meeting with Converse, the designers asked her what silhouette she’d like to work with. Her answer, without hesitation, was the One Star. “It was the easiest design meeting I’d ever been in,” she says.

The feeling was mutual. “Erin has a lot of personal connections to Converse and the One Star, so working with her and heating up the One Star made perfect sense,” says Converse senior designer, Amy Rauner, who worked closely with Magee throughout the design process.

MadeMe, which has a reputation for being on the forefront of female street culture, riffs off of New York City’s intersection of the queer, fashion and rave communities to deliver a unique take on streetwear’s status quo. That DNA shows through in the collection, which is comprised of four One Star Platform silhouettes and an assortment of apparel, in distinct 90s style represented by bold colorways and fun riot grrrl-vibe graphics. 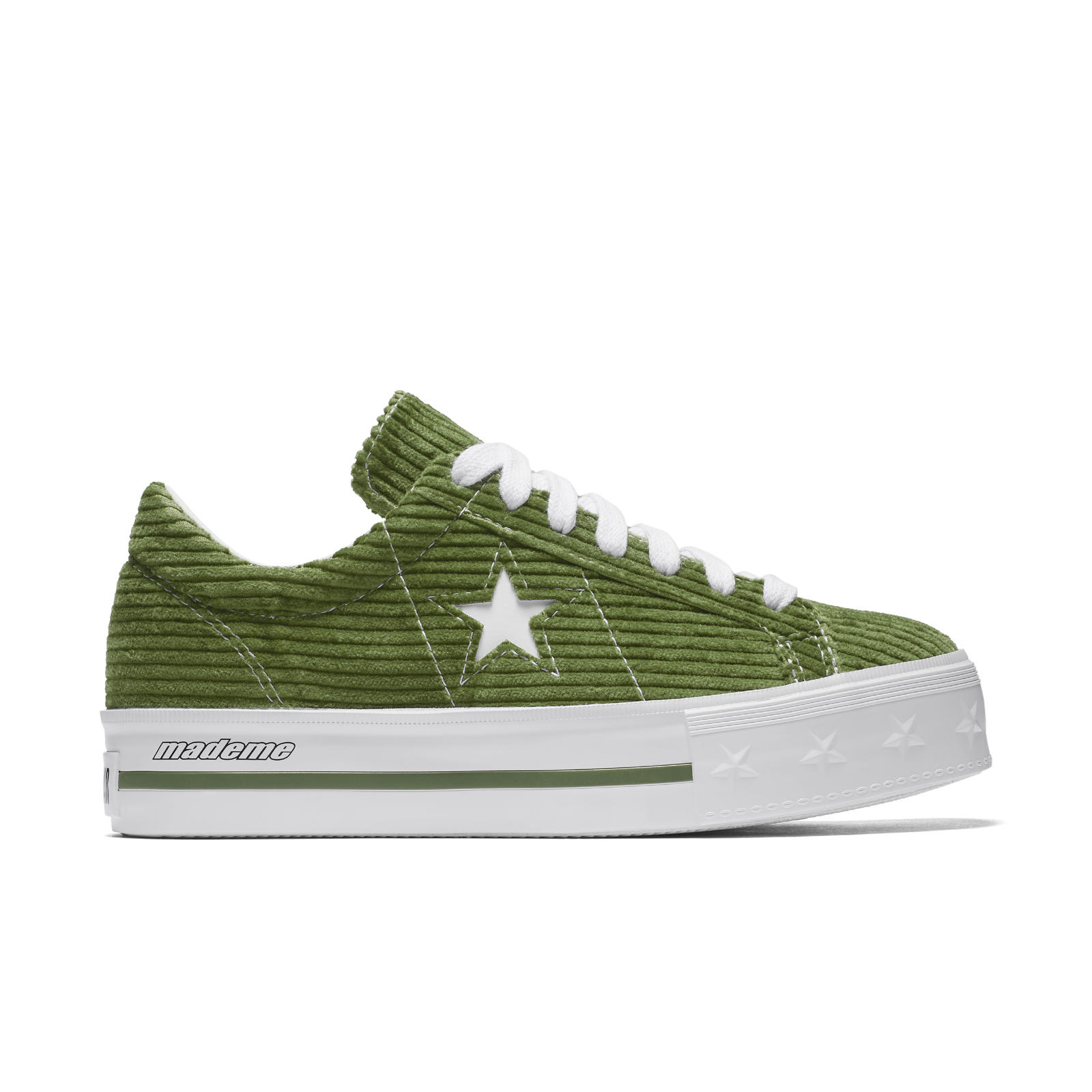 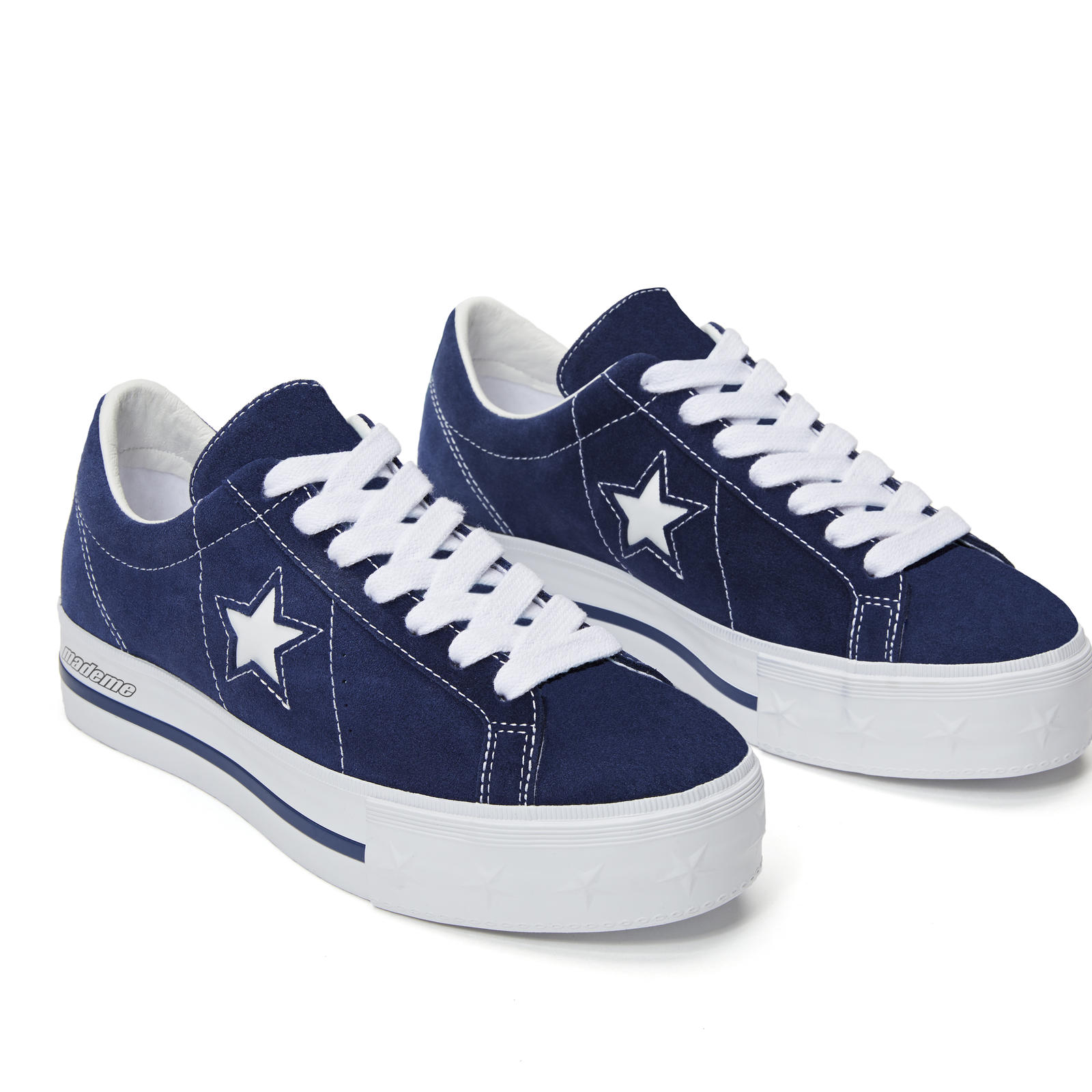 “It’s not a super-exaggerated platform; it’s slightly lower than some of the other ones. I was very picky about making sure it was the exact same size. It feels more 90s chunk sneaker than modern fashion. You can wear a bigger pant with it and they won’t eat the shoes.” 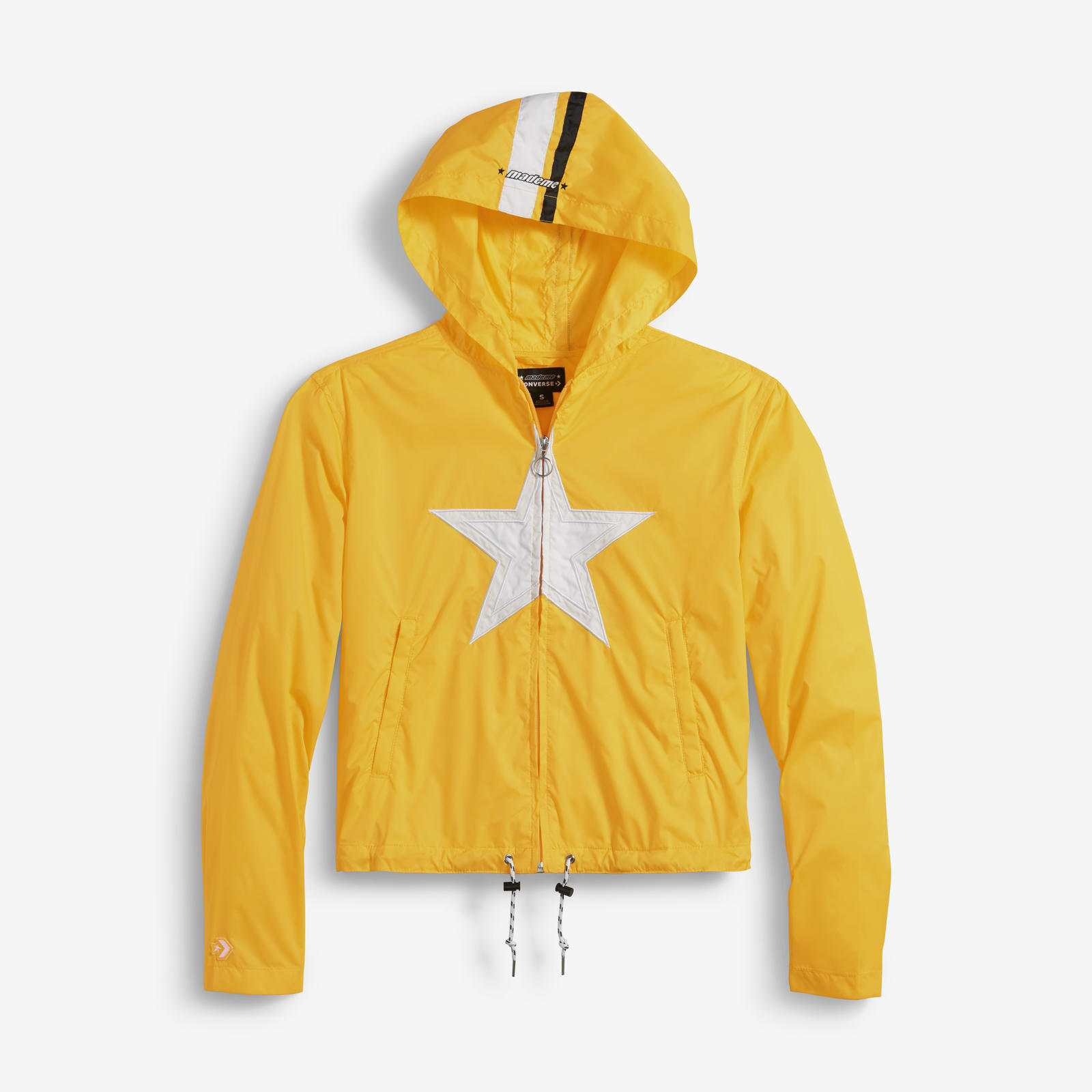 The high-contrast track suit features a Hooded Track Jacket with dual-tone racing stripes down the hood and side panels, open hem sleeves and appliqué star across the chest. 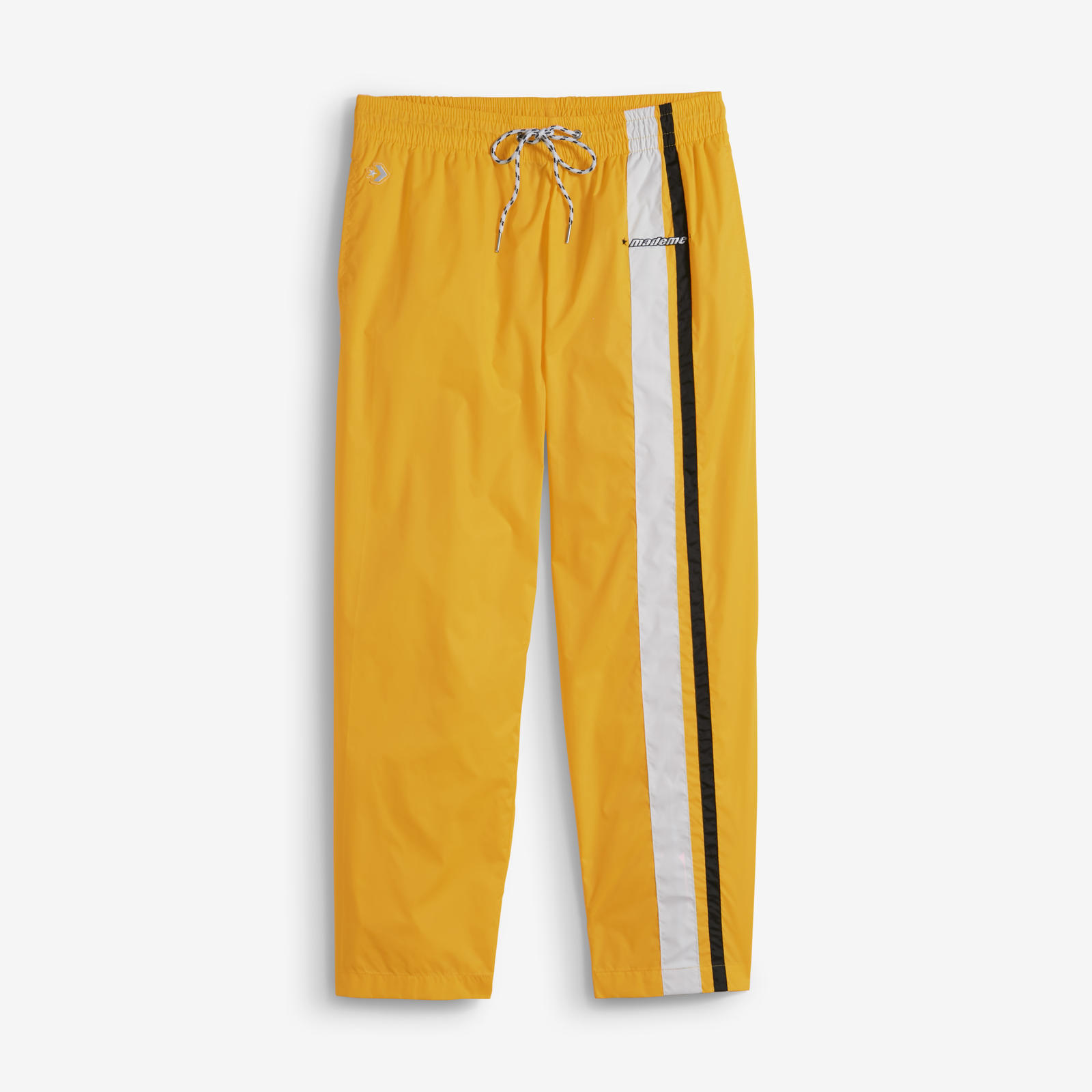 The Oversized Track Pant has a dual-tone racing stripe down the open-hem legs, a textured waistband draw cord and an embroidered MadeMe and Star Chevron logo. 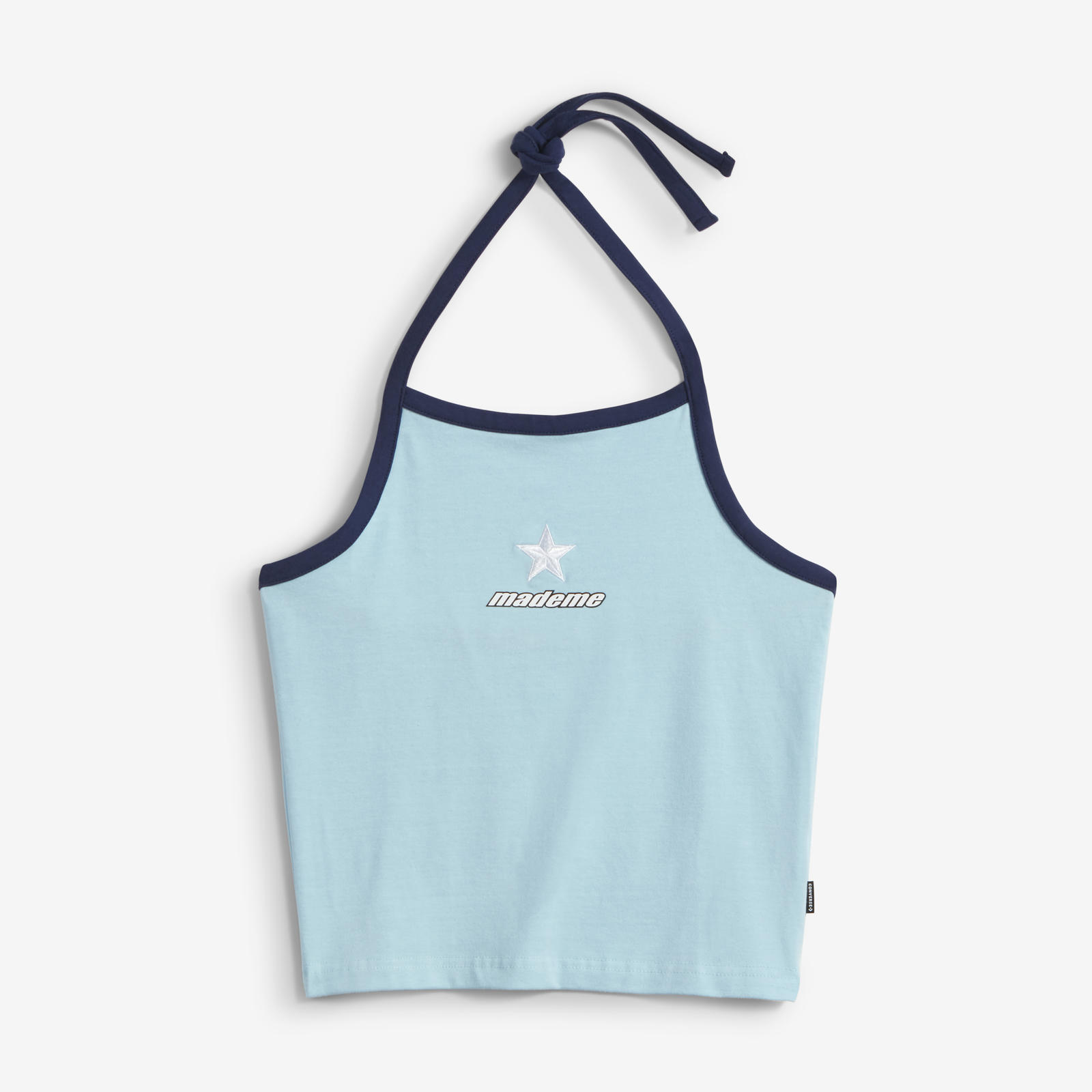 An assortment of 90s Halter Tops highlight the MadeMe and Star Chevron logos. 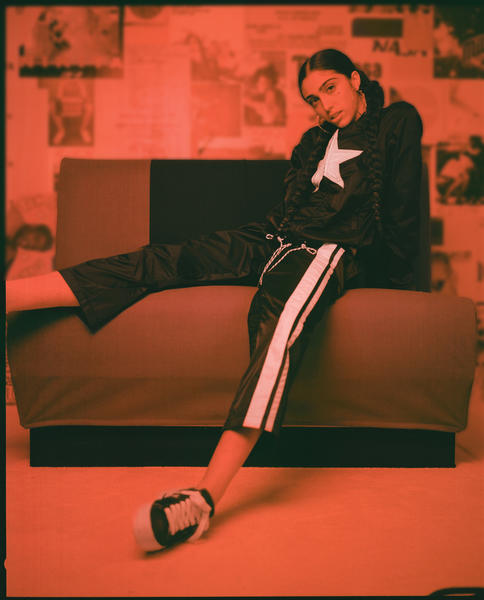 “I wanted to connect directly to the old shoe, so we did two colorways in suede and two in corduroy, because that was the real fabric of that time period,” explains Magee. Both fabrics are also used throughout the clothing.

The biggest challenge for the designers was getting the material qualities up to the standards of a vintage material. “Erin actually brought in her vintage shoes and we worked off of those to find the right wale corduroy with the right hand feel,” says Rauner. This was key because that specific silhouette did not exist within the Converse archive.

The team worked quickly and totally in sync to create a collection that represented both brands and an entire era. “Converse is the only company I’ve ever worked with where every time I went to a meeting, Amy knew exactly what I wanted. She’d be done mocking up designs before I was done talking. I’ve never, ever had that happen before,” explains Magee. “Beyond that, I’ve been involved in every step of this process and Converse has stepped back and let me be, which is so cool and so fun because it usually doesn’t happen that way.”

The Converse x MadeMe collection, which also includes a wide-cut Oversized Corduroy Short, The Long Sleeve Tee and Super Mini Backpack in four colorways, will be available May 24 on converse.com.