The Legacy of LeBron's Soldier Line

Two generations of fans have their LeBron Soldier moment.

The first was back in 2007, when the Cavaliers faced an uphill battle in the Eastern Conference Finals. Wearing the Zoom Soldier, LeBron would score his team’s final 25 points for a double overtime Game 5 win. The second was in the 2016 Finals. Down 3-1, LeBron led an improbable comeback, rallying three straight games in the Soldier X to finally bring a title back to Cleveland, averaging a stat line of 30 points, 9 assists and 11 rebounds.

Few non-signature shoes have had as successful a postseason legacy as the Soldier. Each of those Soldier games from LeBron were so dominant, the images of the stripped-down, strapped shoes are inseparable from the performances themselves. According to LeBron’s footwear designer Jason Petrie, everything about the Soldier line began with a clear focus: lightweight lockdown.

“The Solider was always about serving LeBron and giving him another thing in his quiver he needed that wasn’t in his game shoe,” says Petrie. “All of it was built around giving LeBron lockdown, so we created a shoe completely based around it, giving him this totally protected, contained force for his feet. Playoff mode, team shoe, FlyEase, straps, laces — there’ve been different takes throughout the years, but it’s always been another tool LeBron could pull out at any time. With the Soldier, many of those performances helped define his legacy.” 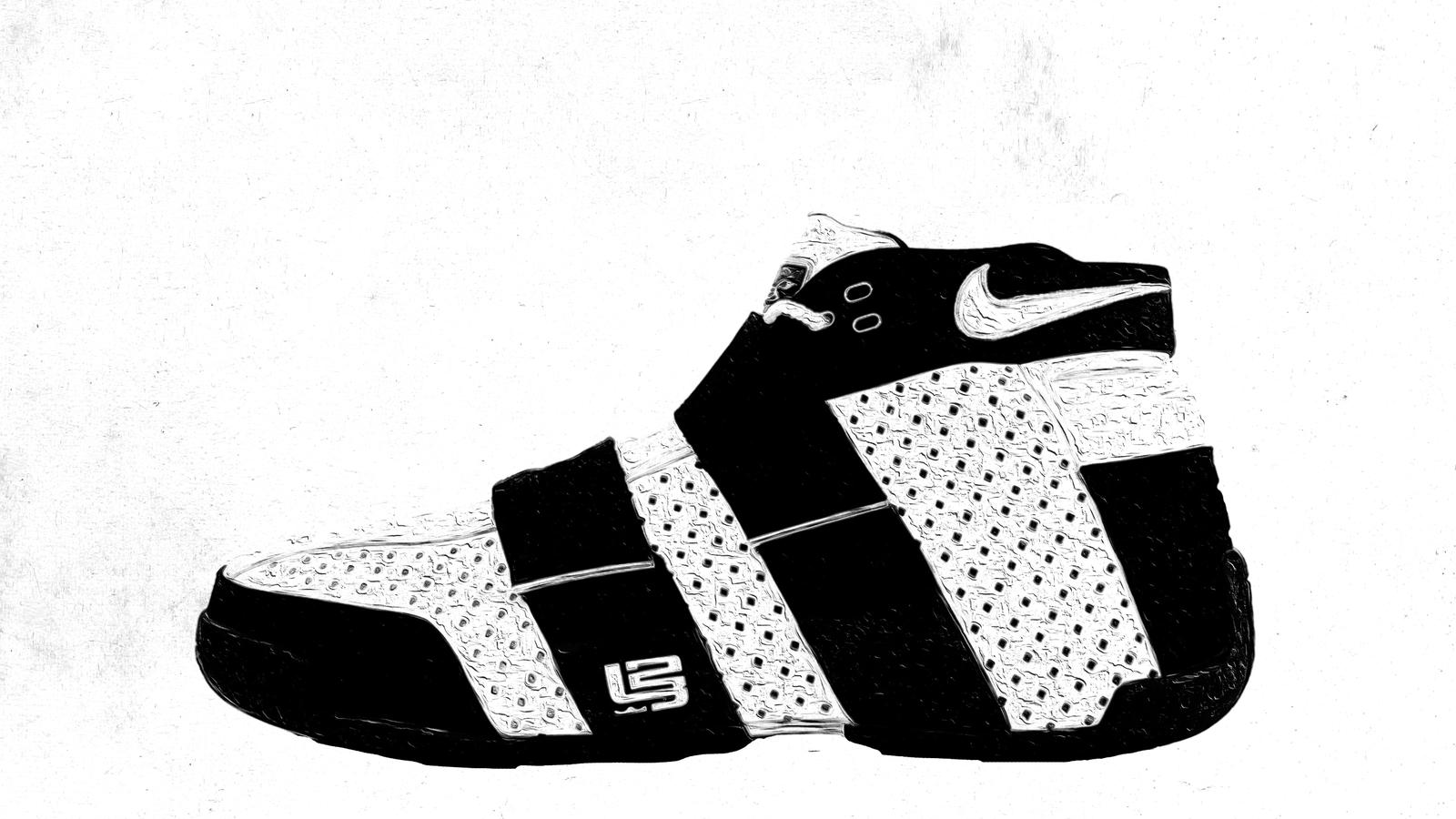 Year: 2005
Notable Colorways: white/black; navy/red; white/gold
Design Notes: The DNA of the Soldier began in the Zoom 20-5-5. Born from the Nike Basketball Battleground series with a rugged look built for playing outdoor ball, the shoe’s midfoot and forefoot straps would become the birthmark of the line. 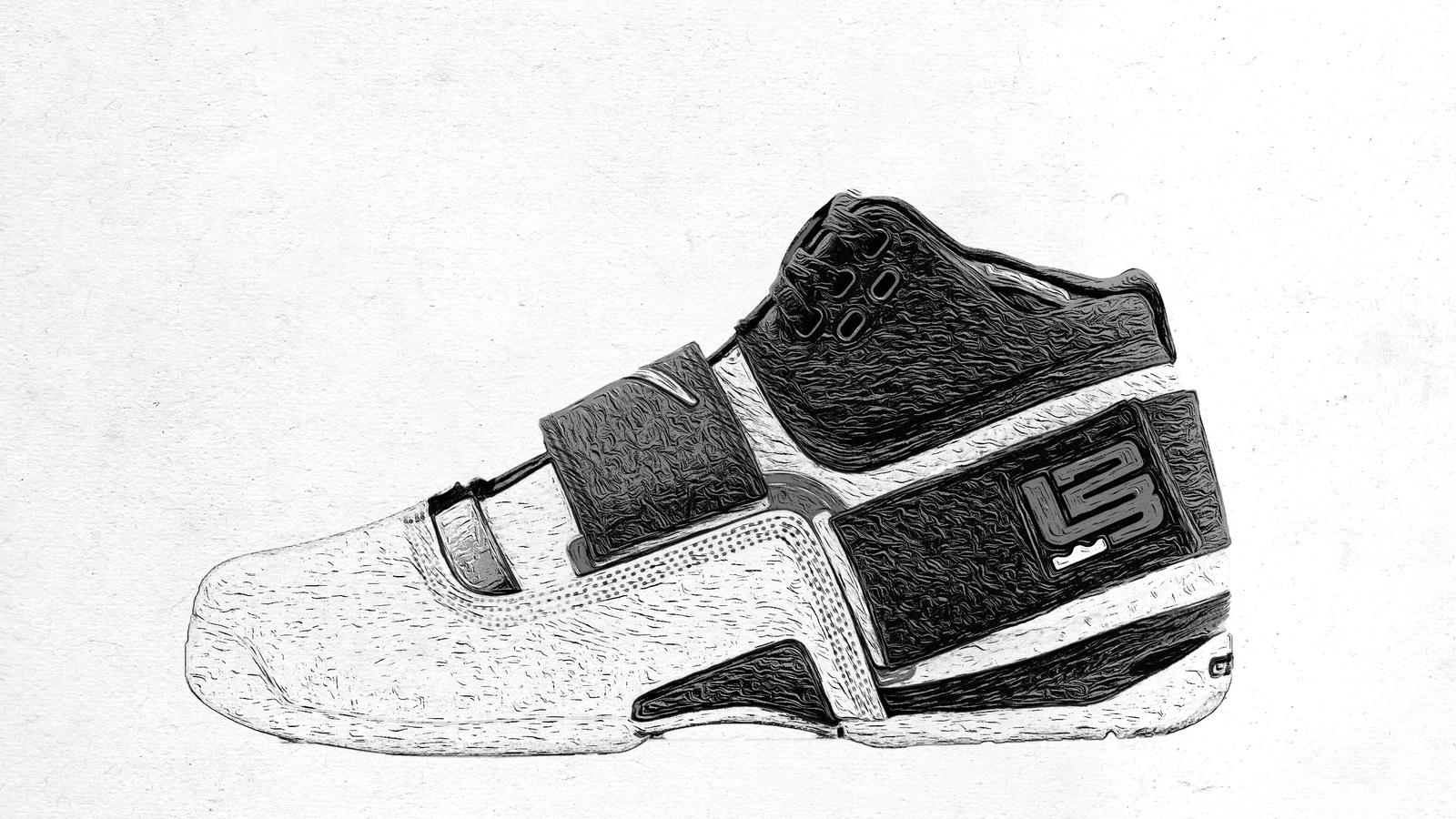 Year: 2007
Notable Colorways: navy/white
Design Notes: The Zoom Soldier was all about the overt straps over the midsole and on the heel. Zoom Air cushioning gave LeBron responsiveness underfoot, while the tumbled leather brought a dependability that LeBron harnessed to will his team to victory in the seminal 2007 series. Says Petrie, “The Soldier line wouldn’t be what it is without that performance. So many people forever connect that memory with the silhouette.” 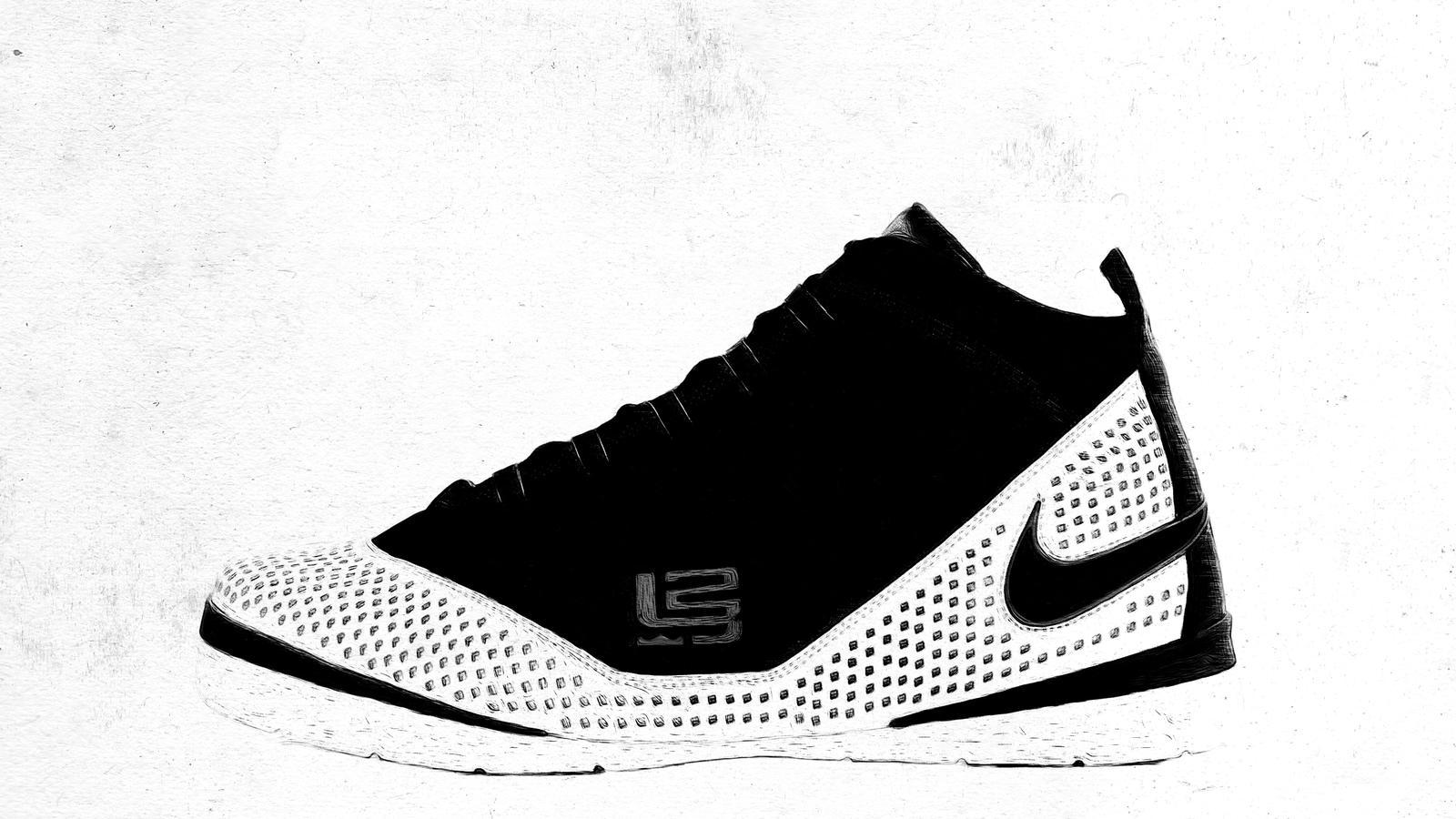 Year: 2008
Notable Colorways: white/black/gold/red; white/navy/red
Design Notes: Perhaps the lone visual deviation in the line, the Soldier II was created for LeBron to wear in Beijing during the summer of 2008. The upper was slightly stripped down without the straps, while its construction focused on durability features like a reinforced lateral rand. “We not only wanted to prepare LeBron for that summer, but we wanted players who watched him to be able to play on outdoor courts and not rip through their shoes,” says Petrie. The traction was inspired by hardy milk crates and would inform other elements of the shoe, like the square perforations in the rand. 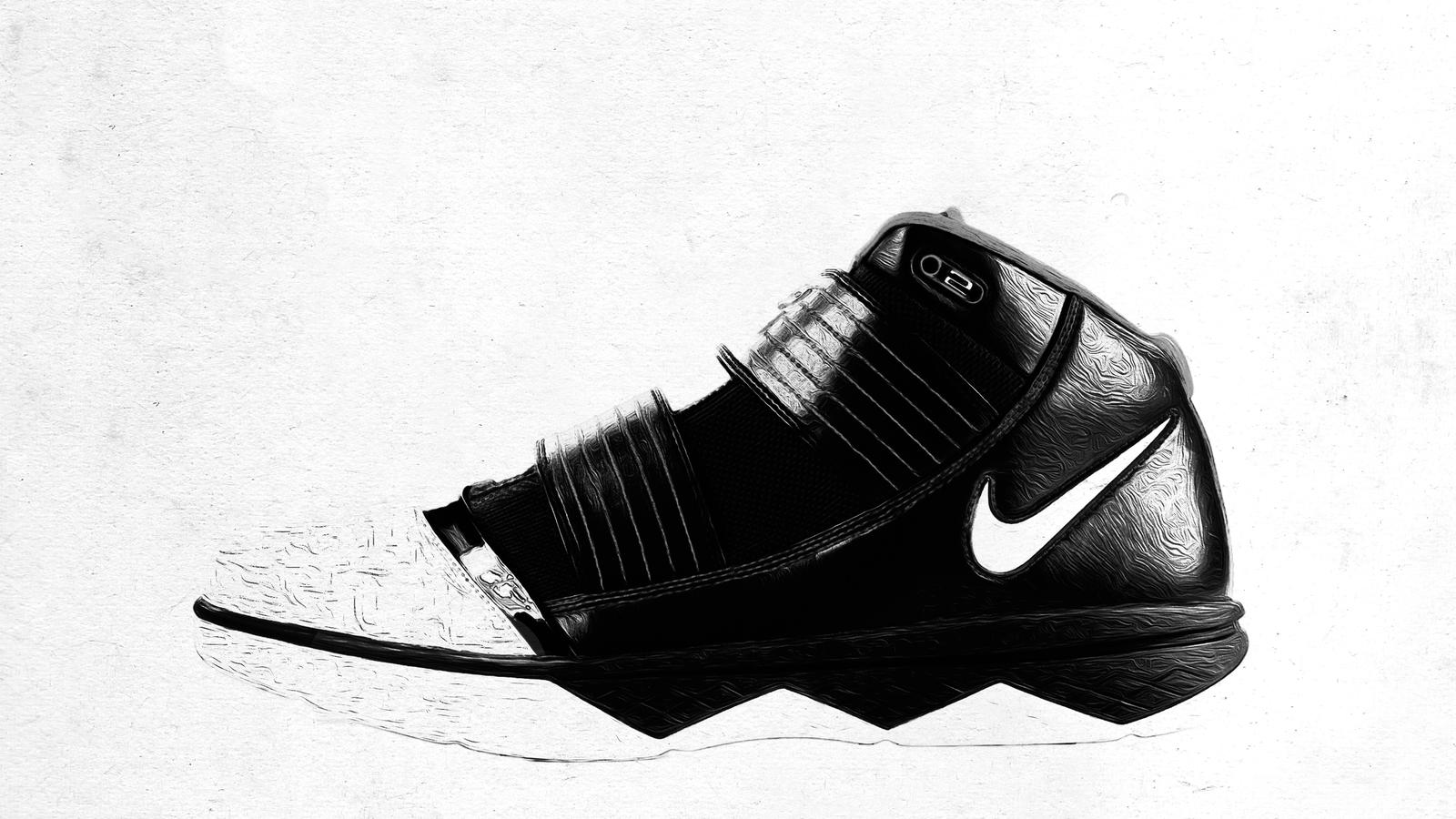 Year: 2008
Notable Colorways: black/white/varsity red; team editions
Design Notes: The double-strap returned, while Zoom Air was the cushioning set-up in the heel and forefoot. The shark-tooth midsole and the toe box added a different muscle to the shoe's look. LeBron wore the Soldier III for perhaps the most memorable buzzer-beater of his career: a three-point heave in the 2009 Eastern Conference Finals. 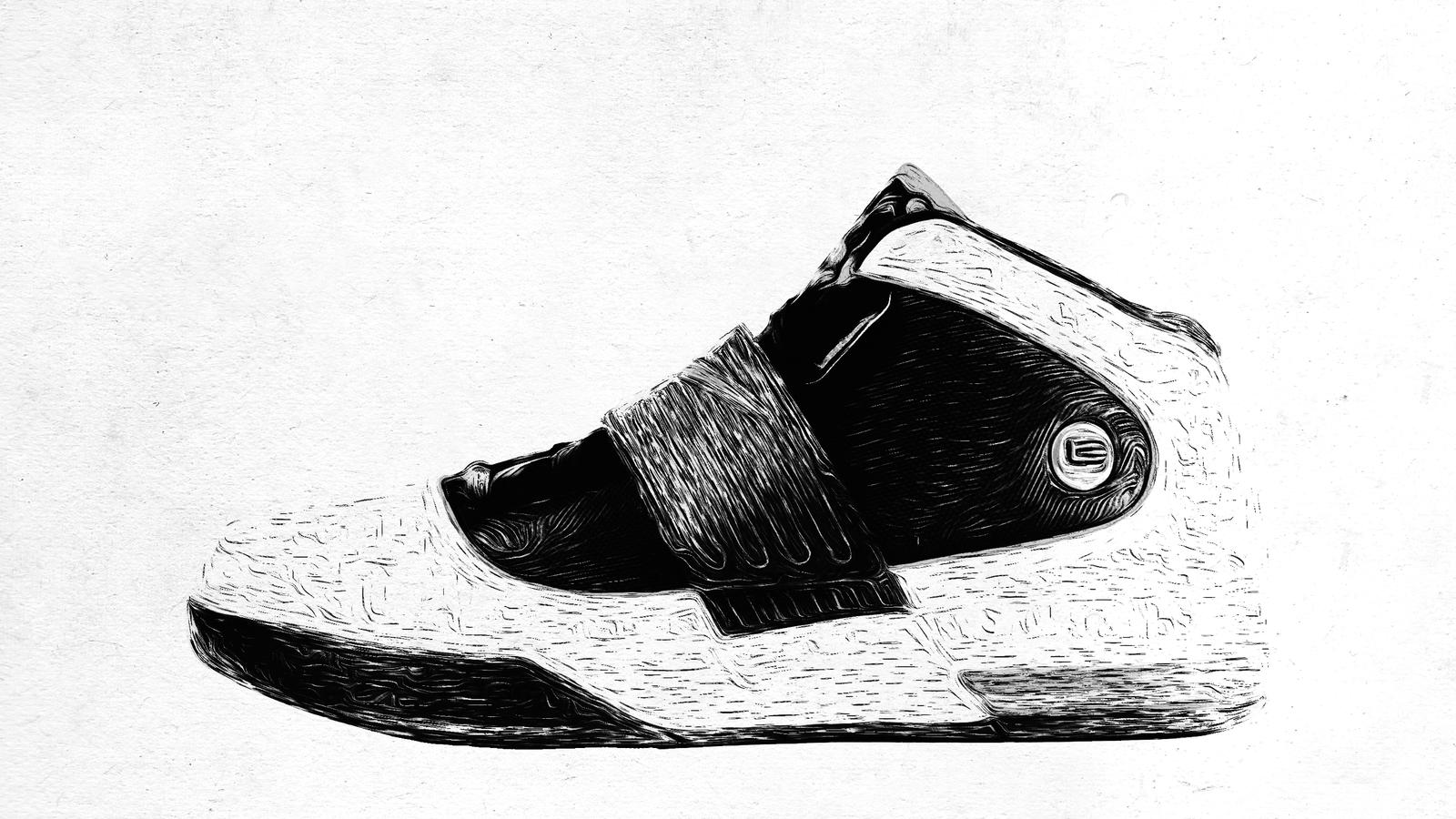 Year: 2010
Notable Colorways: white/sport red-black; white/deep maroon/metallic gold; team editions
Design Notes: With a suite of playoff performances under LeBron’s belt, the storybook intrigue of the Soldier line grew. The Soldier IV continued the line’s entry into team colorways. “That team concept made us think, 'How can this be shoe be more inviting to wear for all players?'” says Petrie. This Soldier included the first lion’s head decal in the series, its face showcased on the tongue. 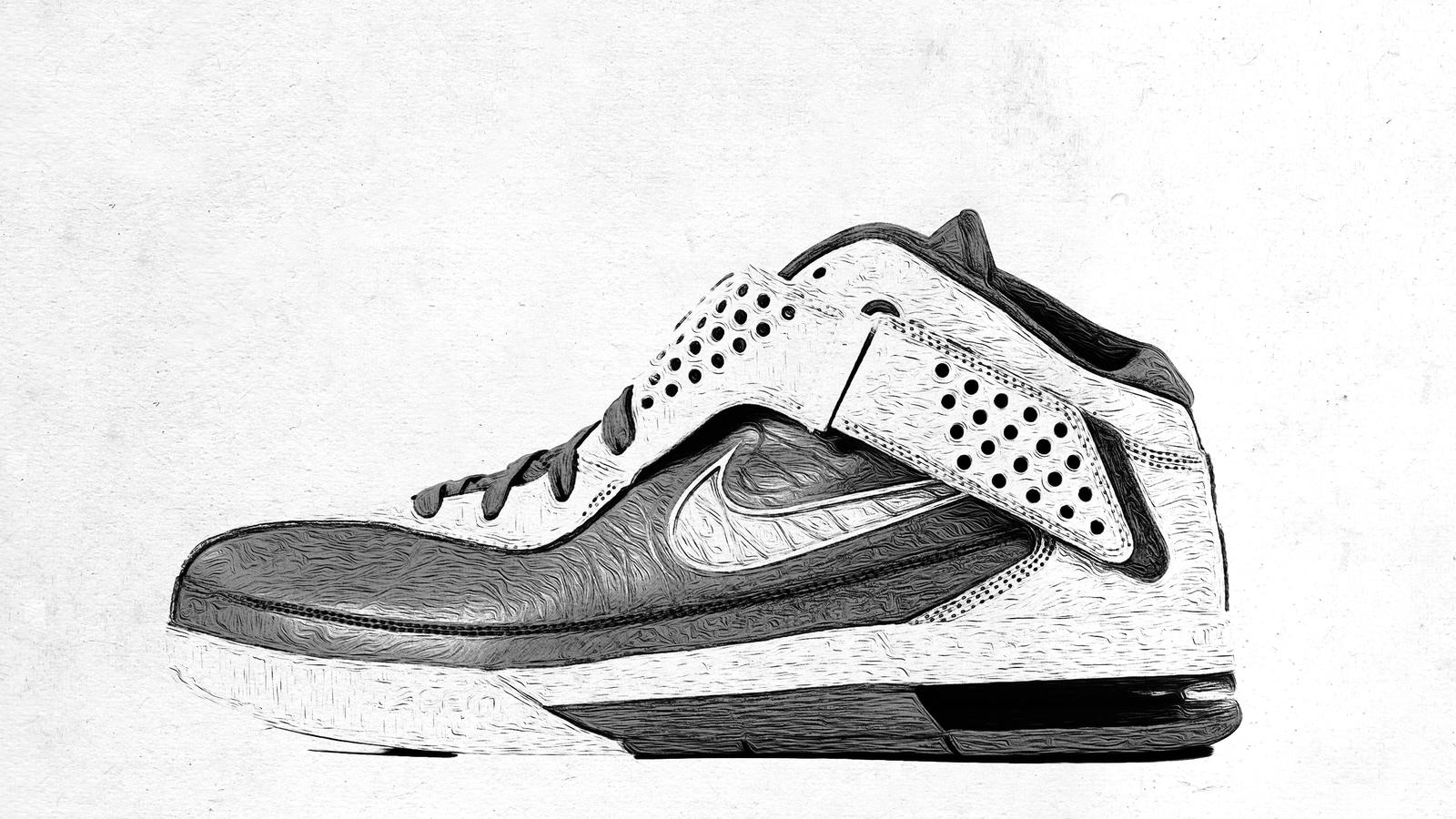 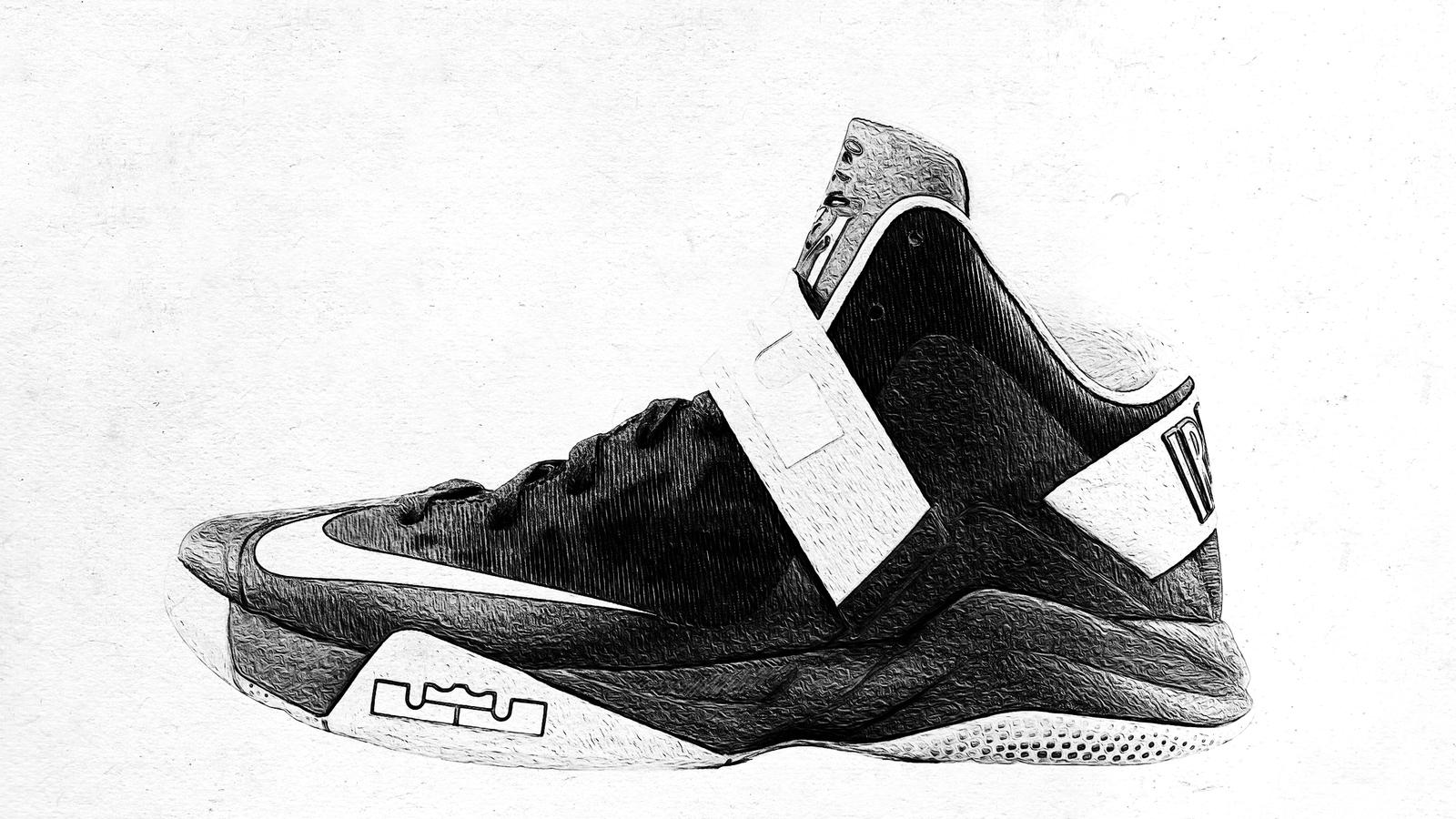 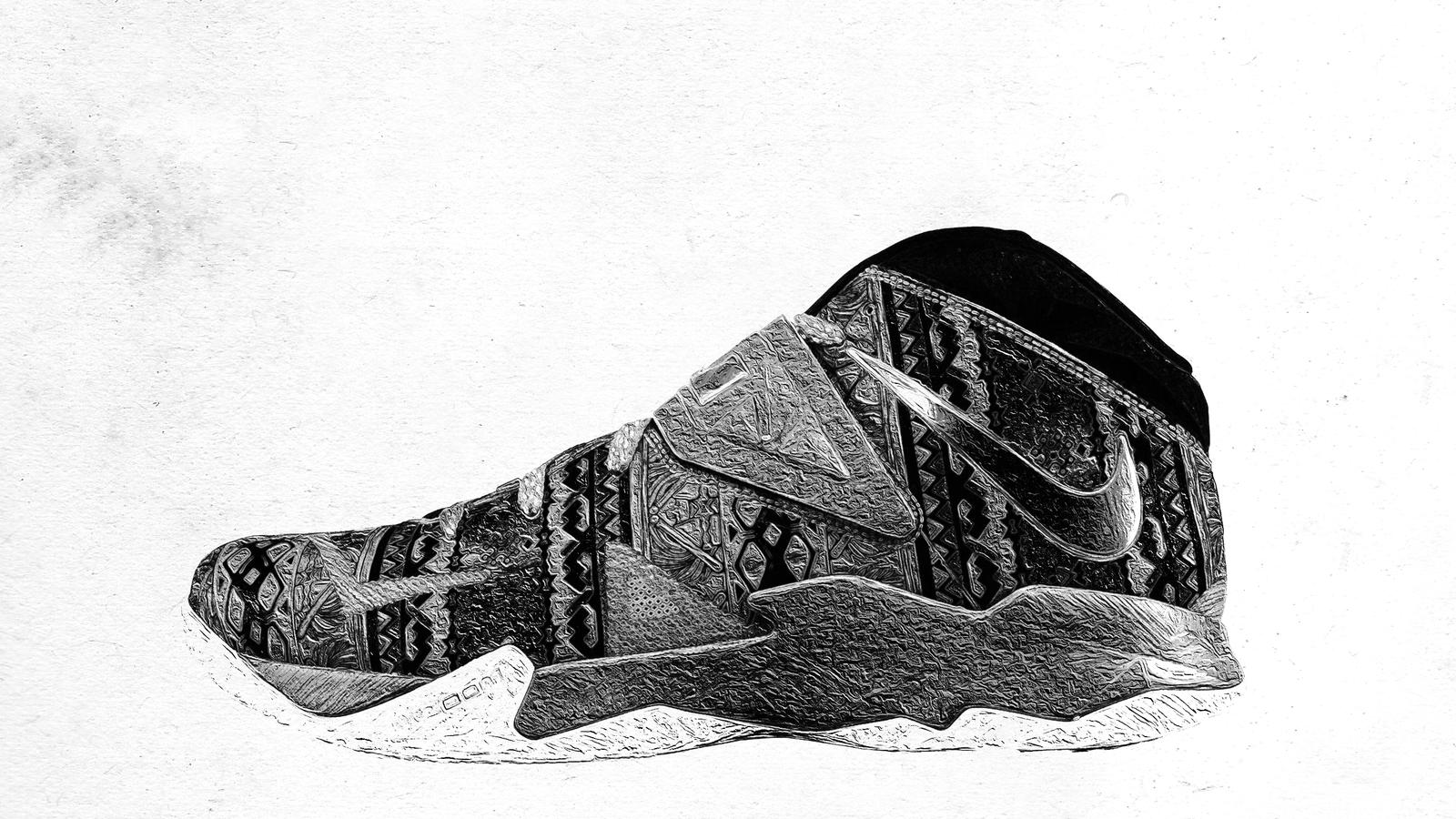 Year: 2012
Notable Colorways: white/venom-green/black; dark sea/pink floral/green flow/wolf grey; BHM
Design Notes: The team would strip away more layers from the Soldier VI, building a shoe that LeBron could wear at a moment’s notice. “He was able to go out during that championship run and wear the shoe unexpectedly," says Petrie. "That’s what the Soldier is for. It could be for a game or it could be a seasonal situation for him, but what’s most important is that he feels prepared.” 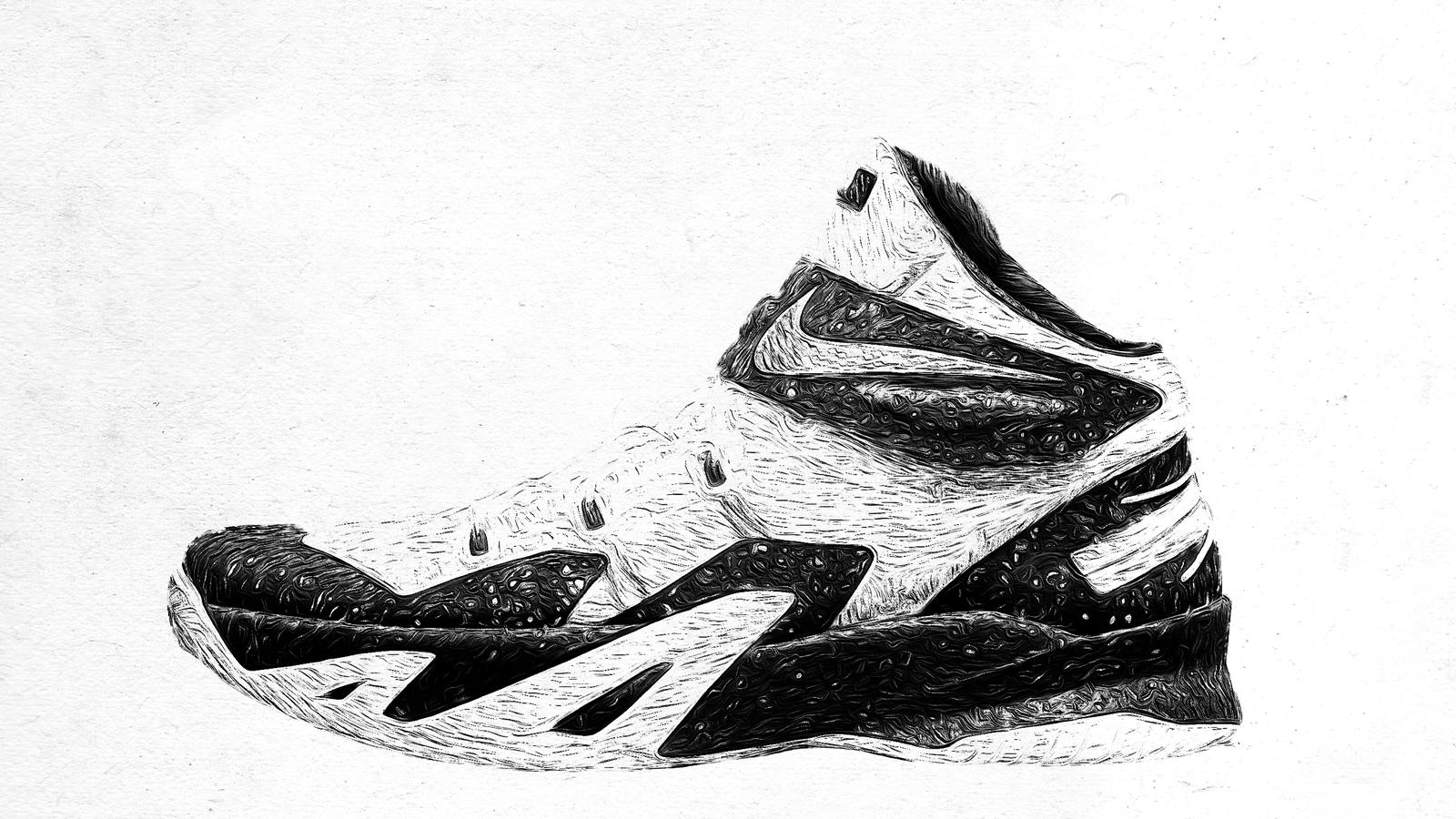 Year: 2014
Notable Colorways: white/metallic-silver/black; court purple/hyper crimson
Design Notes: While the shoe included Flywire throughout the upper, its most important feature was in its FlyEase edition, featuring an easy-on, easy-off entry system through the heel counter and doing away with laces. “It was an innovative fit solution that LeBron loved," says Petrie. "The design also took the Soldier in a new direction and gave us the confidence to experiment with some new containment strategies.” 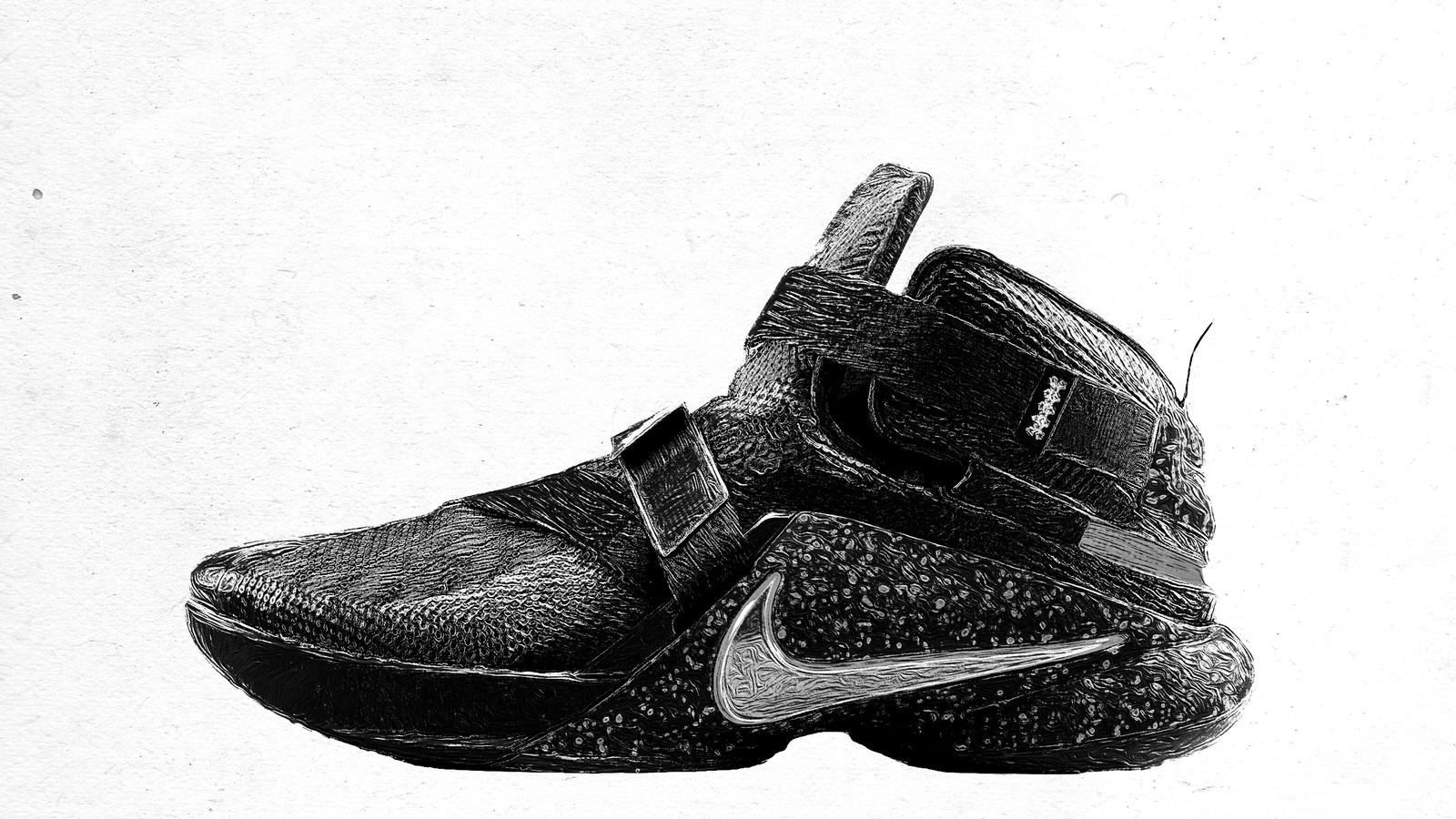 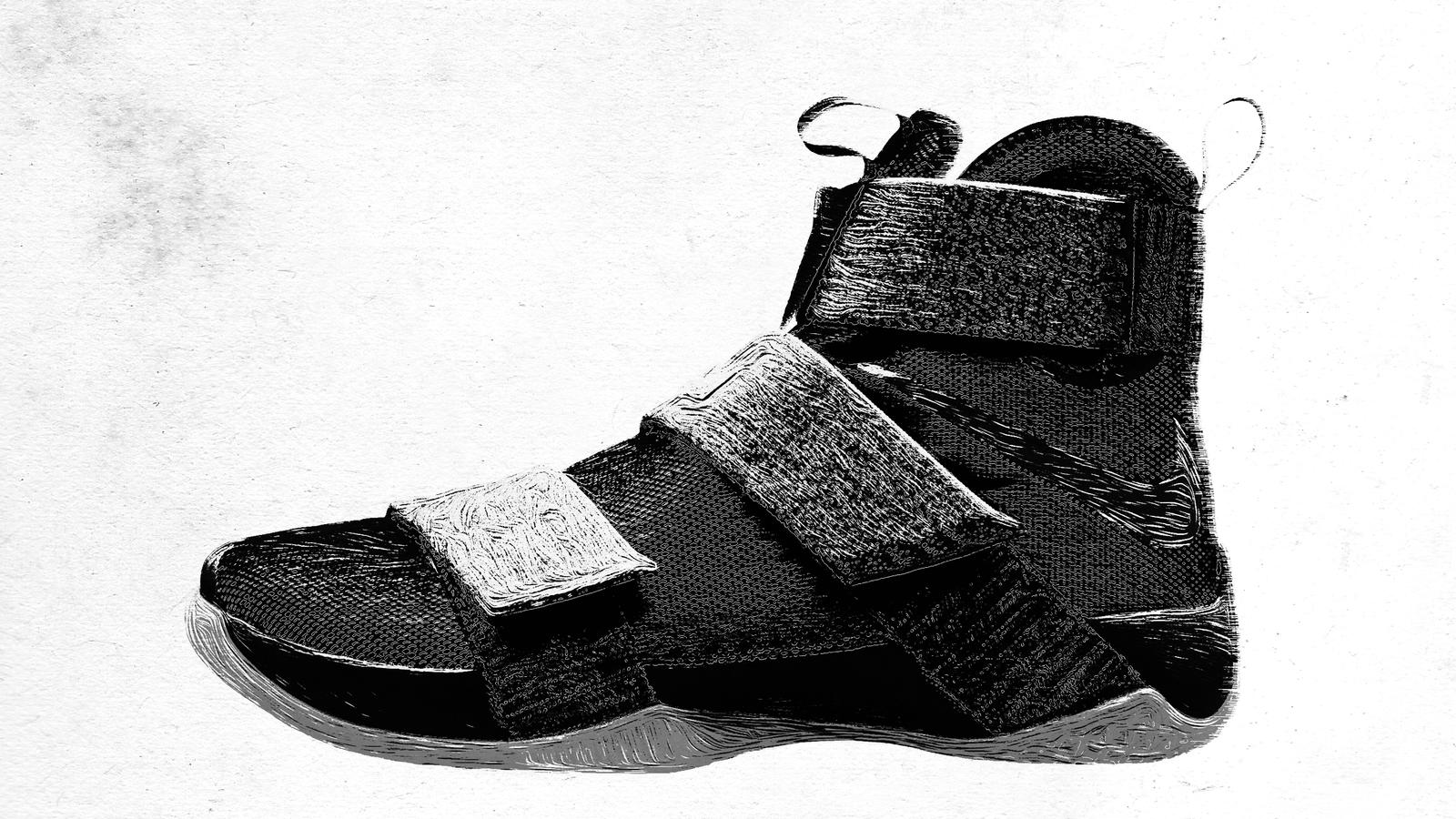 Year: 2016
Notable Colorways: black/black; white/black/white; white/white/orange
Design Notes: Petrie and LeBron wanted the X to have a visual significance as an anniversary shoe. They wanted the shoe to connect back to the 20-5-5 somehow, and with FlyEase in mind, they wanted to remove the laces. What resulted was Nike Basketball's first laceless performance shoe. Minimally logo’d and higher cut, the shoe went against most of what the basketball footwear industry was doing at the time. Then came the 2016 Finals, which cemented the shoe’s place in history as one of the all-time memorable playoff shoes. “The shoe reinforced the idea that you don’t need all these extra layers to play at a high level,” says Petrie. “It redefined not only how we built his Soldiers, but his game shoes too.” 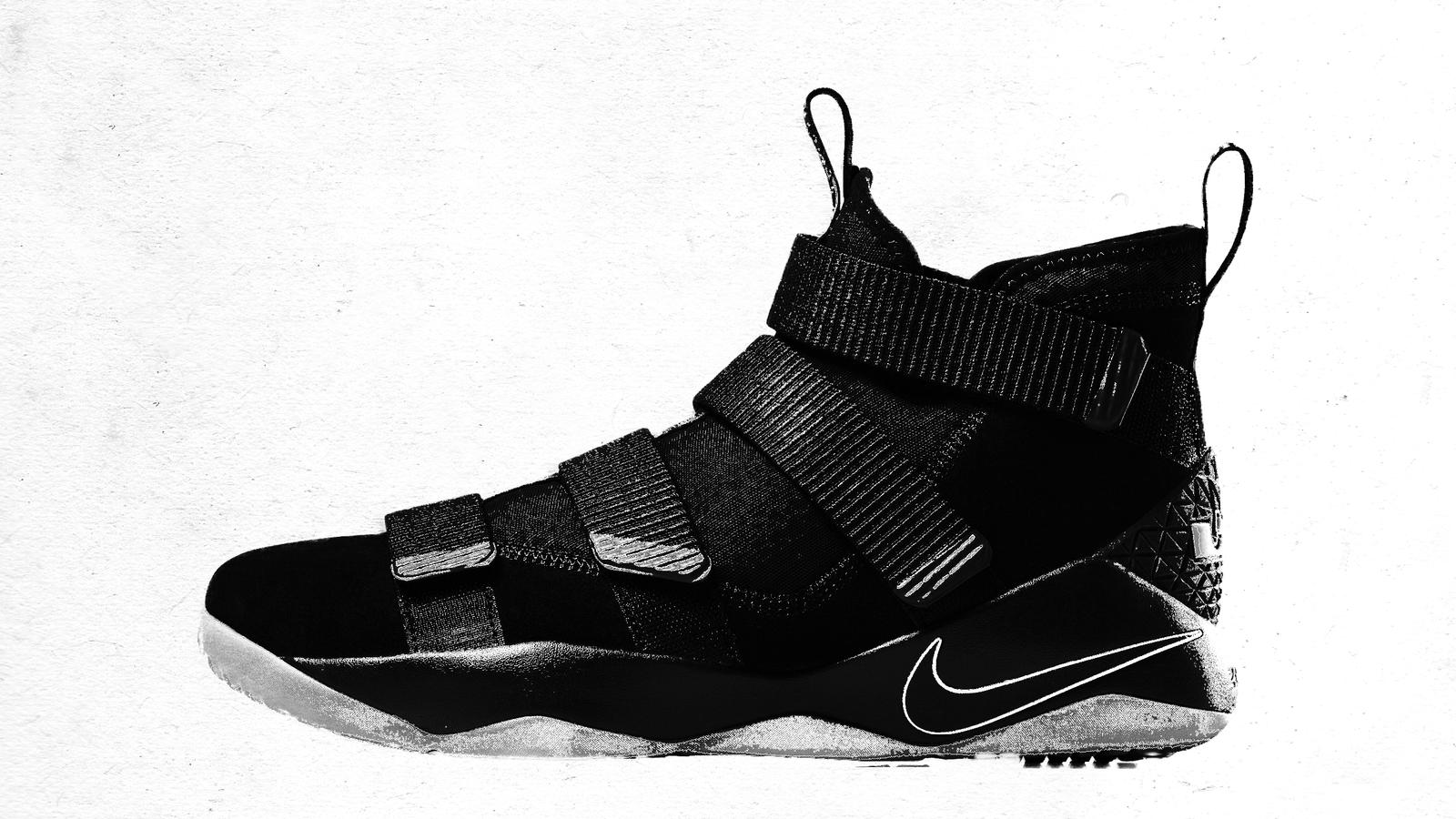 Year: 2017
Notable Colorways: black/black/gold; white/white/red; black/grey/orange; white/black/metallic gold
Design Notes: Translating feedback from the X, the XI increased the strap count from three to four and made the straps thinner so the foot could bend and flex more easily. The team would also incorporate premium materials like leather to give it a more forceful court presence. 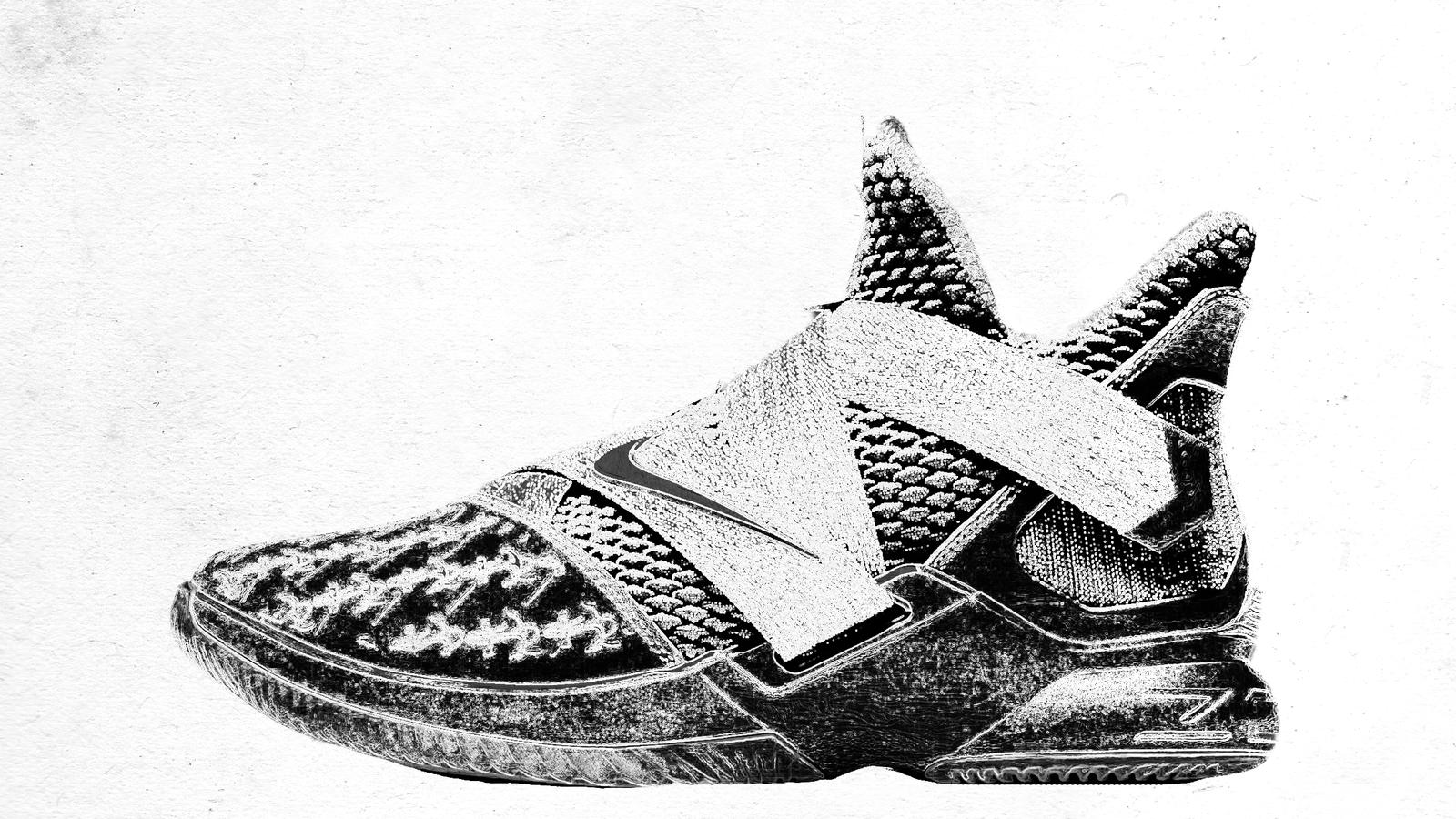 Year: 2018
Notable Colorways: olive canvas/string gum/light brown; team red/gum; obsidian/metallic gold
Design Notes: Does that X-strap look familiar? Petrie and the team dabbled in a containment set-up that took a page from the Nike Air Raid, among other silhouettes, to lock down different foot shapes. “The vision for that system is to give you the freedom to strap down the shoe anywhere that’s comfortable, instead of being directed to adjust it in a certain way,” says Petrie. 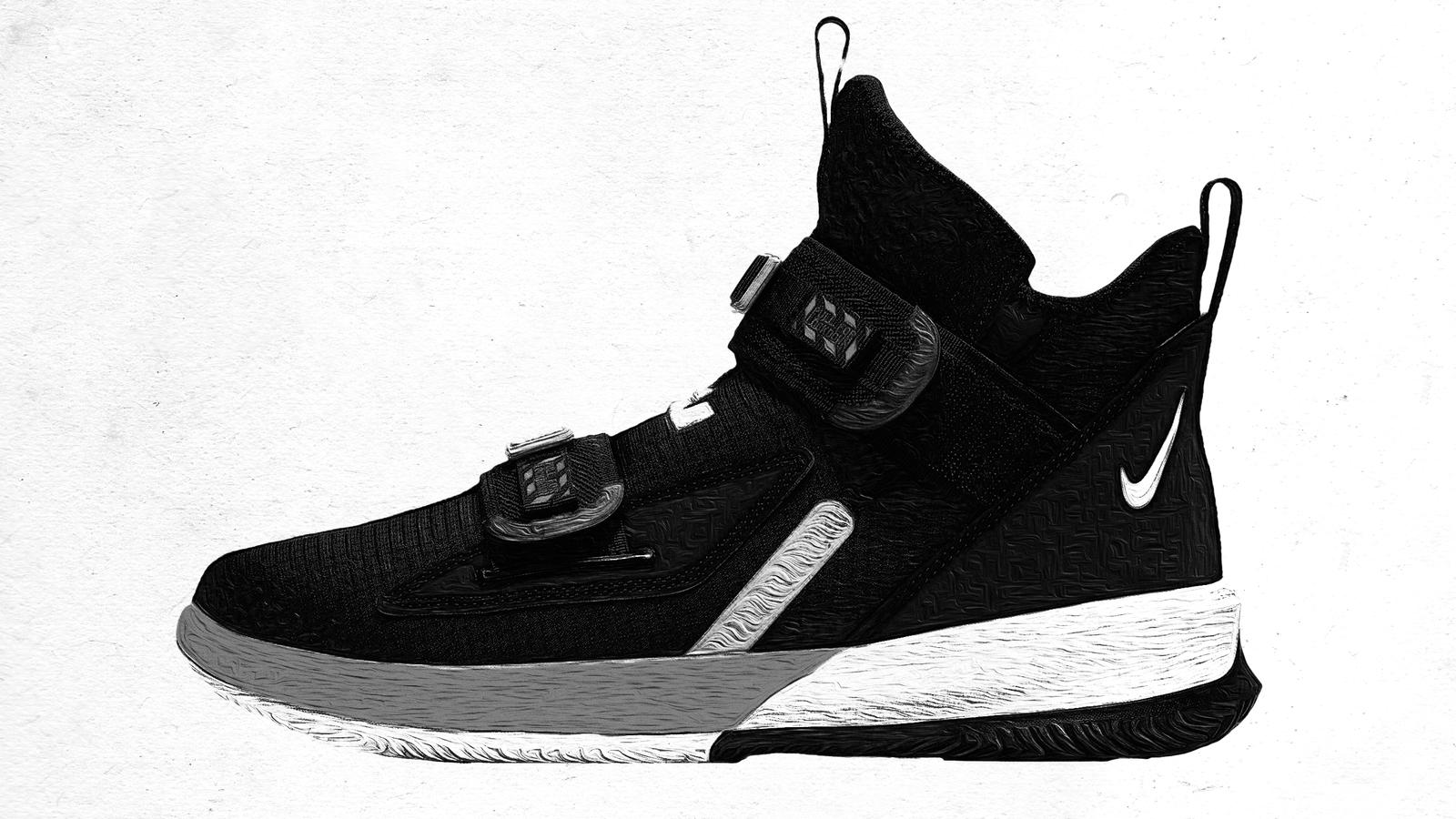 Year: 2019
Notable Colorways: purple/yellow/black
Design Notes: The XIII was inspired by the gusset construction from the LEBRON XVI. The lockdown featured two durable straps with an adjustable slip-lock, allowing players to make more precise adjustments for a secure fit. 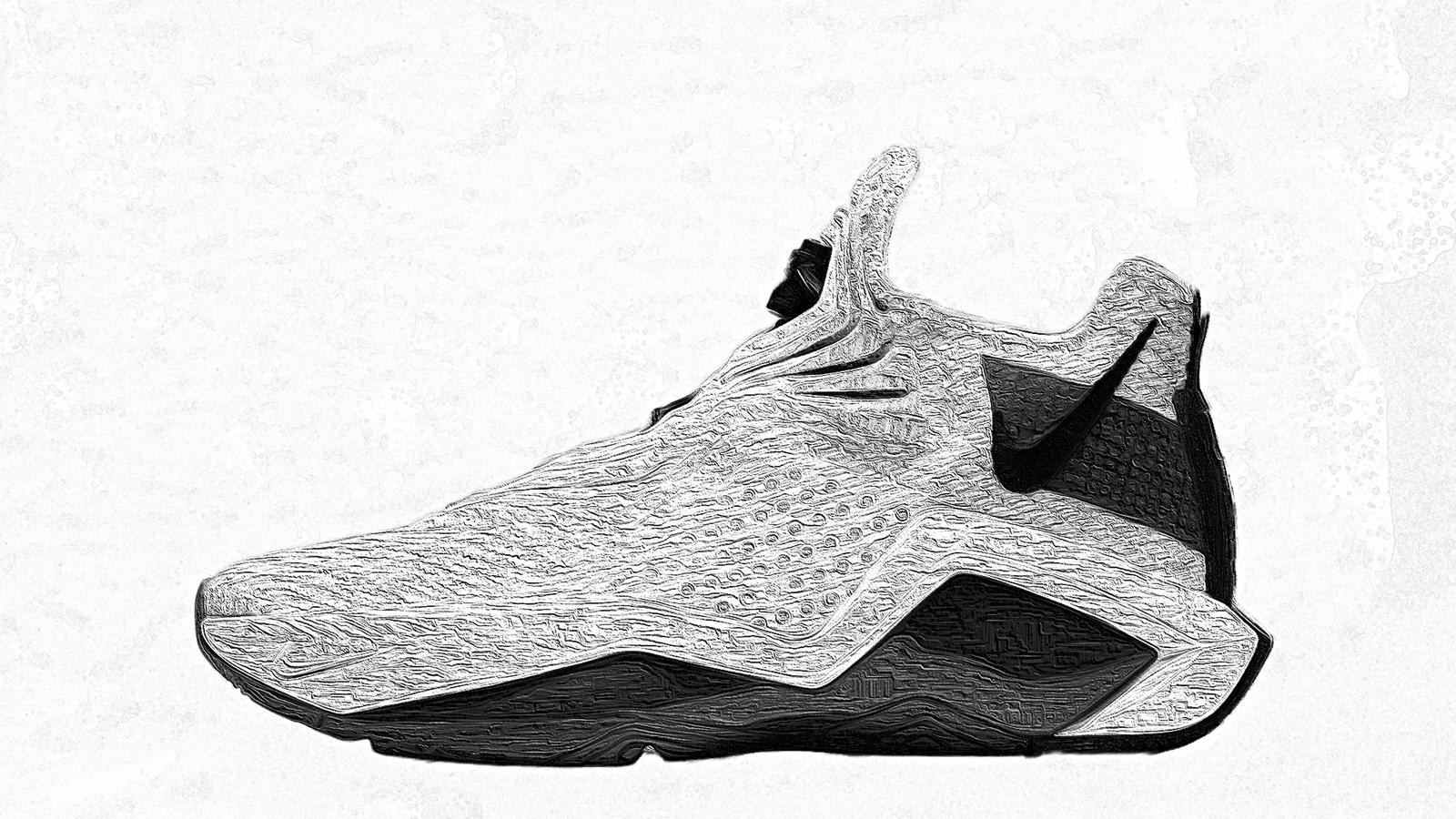 Year: 2020
Design Notes: In the XIV, Petrie and the design team wanted to get faster, which meant reducing more layers, getting the foot closer to the Zoom Air and replacing the straps with a dual lacing and toggle system. The result is a lithe, lightweight design that gives a smooth ride — and builds off the versatile philosophies of containment that the line is known for.