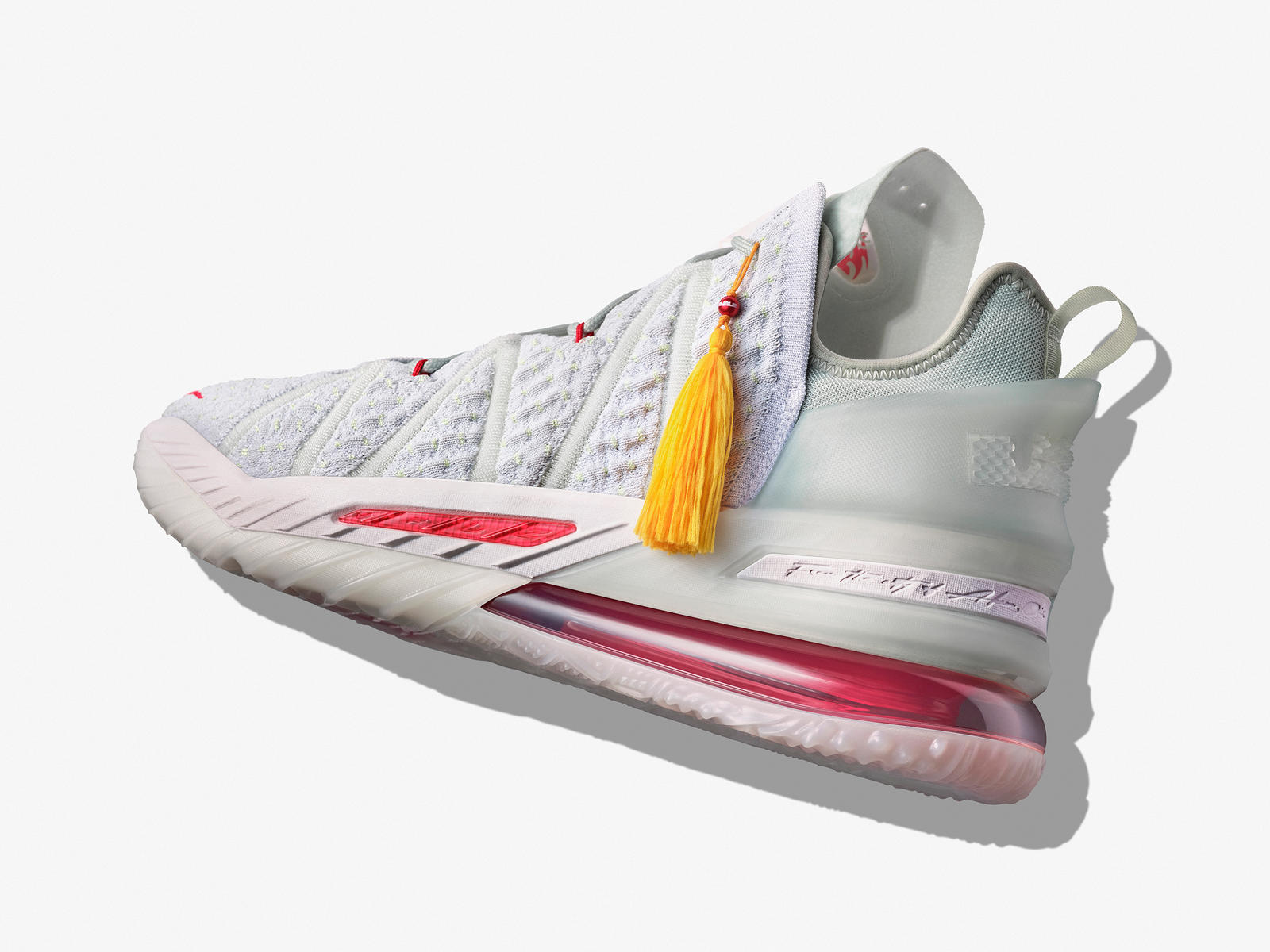 The Empire Jade colorway of the LeBron 18

The LeBron 18 finds LeBron James in a specific time and place in his career — late into his 17th season, he needs the cushioning set-up to support his unique blend of power and speed.

Fittingly, the 18 comes in an inspired configuration: It's effectively split down the middle from forefoot to heel. According to LeBron footwear designer Jason Petrie, the shoe’s cushioning distinction is both technical and symbolic.

“At this point, LeBron has spent half his life with Nike,” says Petrie. “We wanted to make him a shoe that played with this idea of two halves. How could we keep improvising on the Max Air value that LeBron loves, but use the forefoot half to sharpen the low-to-the-ground, micro-shifts that LeBron needs to cut and transition down the floor? We’ve gotten near-surgically detailed on these features so that the sum of the shoe’s parts come together for LeBron, and for every kind of player.”

Here's what you need to know about the shoe:

The 18 comes with a new cushioning arrangement: An Air Max unit in the heel is augmented by a full-length Zoom Air Bag. The two are integrated with one another, the Zoom Air Bag extending into the heel cavity and replacing what was previously foam—the first such cushioning arrangement in Nike Basketball. The shoe is visually divided into two "halves" with details connoting speed in the forefoot and muscle in the heel.

“In the external heel shell that encases the Max Air, we're going for an armor-like interpretation of strength that's more overt than some of his other signature shoes,” adds Petrie.

2. The knit’s a mix of LeBron’s favorites.

The LEBRON line has long been a canvas for innovative knit constructions within Nike Basketball footwear. For the 18, the Knitposite 2.0 upper follows a special recipe. There’s the raised dimensions from the 15's Battleknit, the high-tenacity yarns from the 16 and the TPU yarns that composed the 17's exoskeleton. The result is a new knit combination that’s lightweight and durable, fit to withstand the forces generated by James.

“You’ll also see in the upper how we integrated a cable-inspired rib cage,” says Petrie. “They reach all the way down into the footbed, allowing this macro support-system to work with the knit.”

3. There are more expressions of air.

Also new to the 18 is a translation of Max Air on the upper, replacing the tongue foam with non-pressurized air pockets. It’s a subtle reframing of material use, an experiment in sensation and comfort — and it’s an opportunity to flash pops of color through socks. Whatever the effect, the addition connects to an affinity for Air that’s followed James through his signature shoe history.

“LeBron has always loved experimenting with Max Air cushioning. He loves the way it feels," says Petrie. "With the 18, we played with different expressions of air in novel ways, with the goal to impart this new look."

4. The traction is refined.

A focus on improved ride (and more efficient movement) works its way into the traction through generative design, a computational method used in the Nike Sport Research Lab. The forefoot is divided into quadrants with thin siping, broadening as you move toward the heel for a stricter grid warp, at which point the traction softens. The transition allows each area of the foot to benefit from the appropriate traction properties; no space is wasted.

“There’s this subtle valley in the heel, but it shifts to all business in the forefoot so LeBron can feel tuned to the floor,” says Petrie.

5. The LEBRON 18 releases beginning in September.