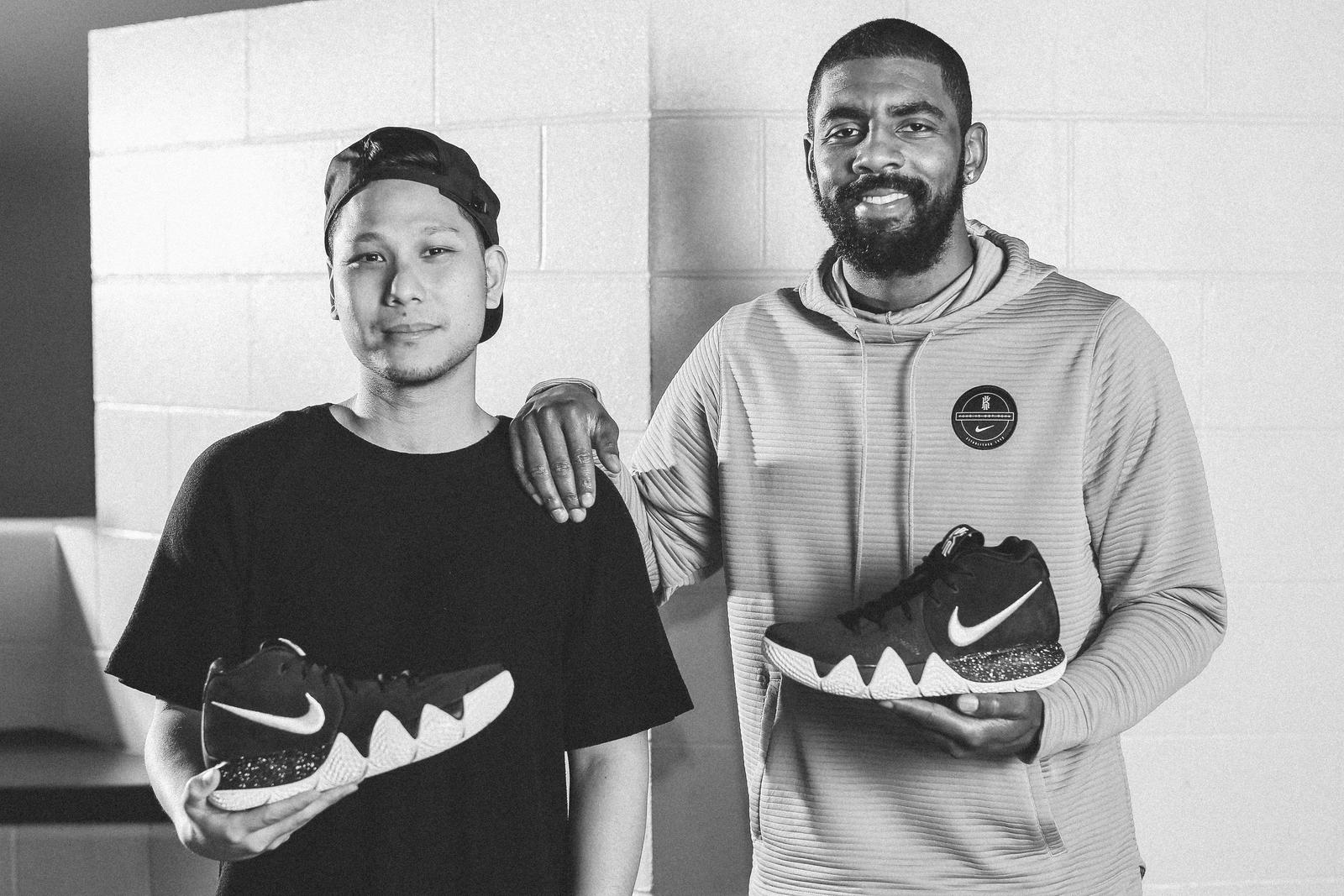 On December 4, Benjamin Nethongkome is seated in row 3, seat 1, behind the Celtics bench at Boston’s TD Bank Garden. It's the first time he has seen his muse, Kyrie Irving, live. “The electricity, the fandom…this is an incredible reminder of how many people love him,” he says.

The designer, who was born in Thailand and moved to Miami at age 10, spends a lot of time watching Irving. In 2016, after nine years of working on a variety of basketball projects, Nethongkome was given the nod to take the helm of Irving’s signature line. Since then, he’s followed every in-game step — even going so far as to pirate game feeds through Reddit when all other options fail.

This night, Nethongkome’s first time at the Garden, is appropriately special. Irving is thrilling everyone in the arena. His game, which Nethongkome describes as “predictable and unpredictable at the same time, like a pin ball,” is on full display. He’s directing the offense one possession, finding the tightest of seams to drive to the basket, and the next roaming the wing patiently in an off-guard position. Masked, in protection of the facial fracture suffered on November 10, Irving scores 19 in the second half. A 27-foot straightaway three late in the fourth brings his overall tally to 32, effectively ices the contest and prompts an exuberant, face guard-removing celebration.

Boston’s crowd becomes unequivocally electric. With its new star leading the way, the franchise stands at 21 wins and four losses at game’s end — a nearly unimaginable position given the season’s calamitous start.

When asked if he wants to meet Kyrie in the locker room, Nethongkome respectfully declines. “I’ll wait until he’s in the new shoe for that,” he says, referring to the KYRIE 4, the shoe he’s designed. “Plus, tomorrow is a big day for me.”

December 5 serves as the de facto coming out party for the Irving’s fourth signature shoe. Though leaked, the silhouette has yet to be discussed publicly. Over a series of conference calls, filmed interviews and tech breakdowns with media, that will change. So too will Nethongkome’s relative anonymity as a footwear designer. 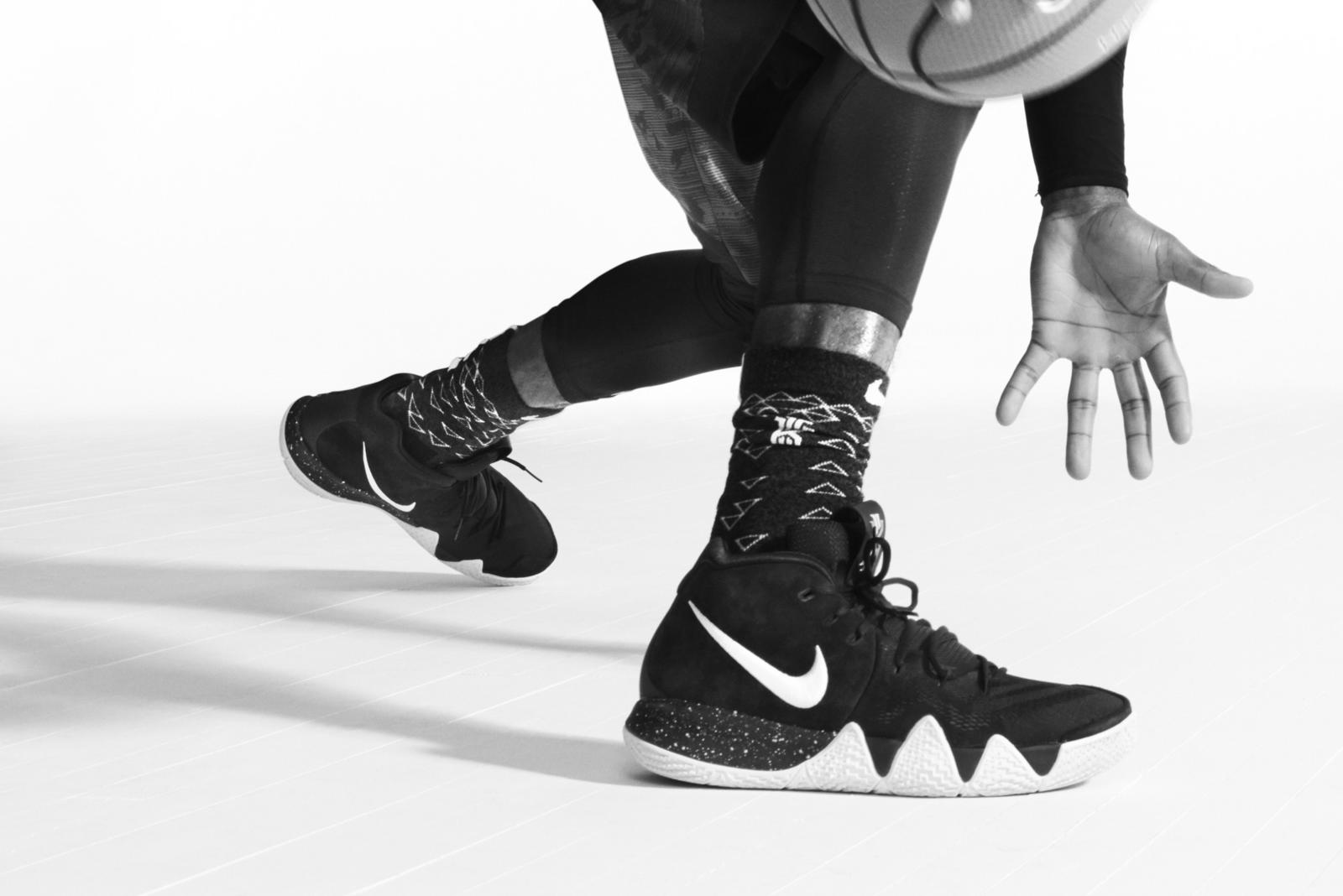 THIS IS THE GUY RIGHT HERE!

Nethongkome and Irving first met on Wednesday, September 7, 2016, during a meeting to firm up release plans for the KYRIE 3. During the session, Nethongkome was announced as the future lead for the line, a major career step and one that wasn’t without chills. “The major difference between my earlier work and this is that I was just another member of the design team and now I am blazing the trail,” he says. “That pressure was major. Even though we have a team of people behind us, that gave me the most butterflies.”

The role also realizes Nethongkome’s dream job. Since the 11th grade at Miami's Design and Architecture Senior High (DASH), when he first started to understand the intricacies of footwear design, Nethongkome has been possessed by the shoe making spirit. He studied industrial design at Detroit’s College for Creative Studies, and then worked his way from Intern to the KYRIE Guy in Beaverton, Oregon.

“By trade, industrial design is about problem solving. If you looked at all the classic Nikes, each silhouette starts as a performance innovation. Shoes become icons, but originate as purposeful things,” Nethongkome explains of why performance, rather than pure style, has driven his career trajectory.

Irving has very unique and specific performance demands. For Nethongkome, these are all good design challenges. The Celtics number 11 bewilders defenders with extreme directional changes. He requires constant support and dynamic traction, even as he banks in the most absurd, contorted foot angles against the court — anything to gain an advantage. “I need to identify a spot and get in and out of it without loosing my balance,” says Irving. “Being able to pivot off my spot and have balance in the shoe, regardless of where my foot hits the court, is essential.”

Solutions for Irving’s style are the basis of the KYRIE line. Each successive model evolves ideas about motion banking, making the sidewall an integral part of the overall traction system and redefining surefootedness on the basketball court. 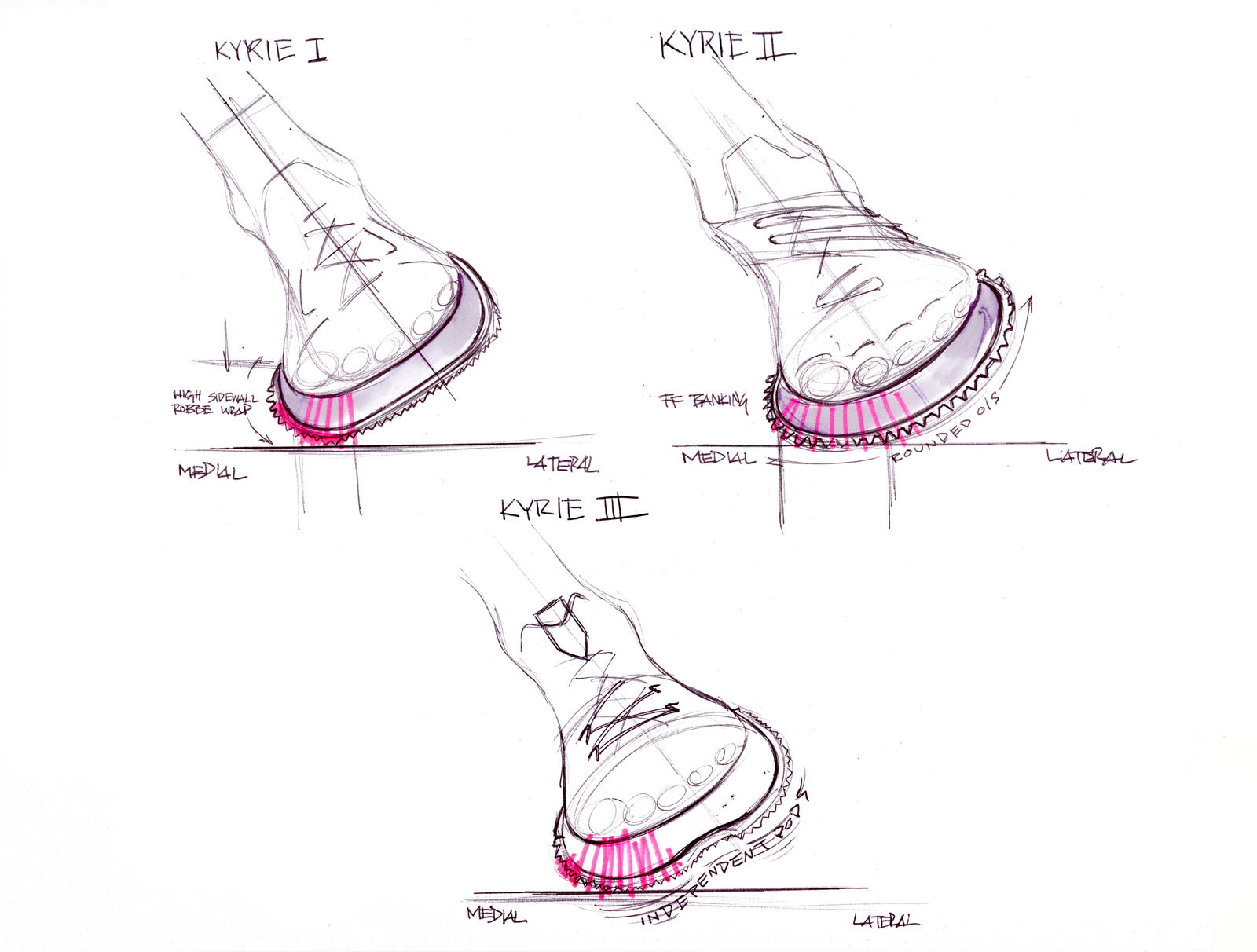 The tooling of the KYRIE line has evolved thinking about how to answer for Irving’s unique movement by incorporating motion-banking solutions. Illustration by Benjamin Nethongkome

“In terms of the technology, Ben is the guy. He really helps bridge the gap between my game and technology,” says Irving.

Nethongkome’s ideas for the KYRIE 4, which are based on Irving’s desire to improve underfoot cushioning (solved with the application of Cushlon midsole Zoom Air heel unit) while simultaneously making him quicker on the corner, are most overtly realized in the outsole’s zig-zag flex grove. Effectively decoupling the sole, this feature enhances traction and response from side to side, forming more seamless transitions. Once again, the outsole wraps up and around the foot, this time forming a fanged sidewall that emphasizes that the shoe was built for speed.

“As we continue to grow a working relationship, we progress what we believe a shoe for this culture should look like and be like,” says Irving. The athlete pauses to define “the culture” too: “When you are part of evolution, when you say it is for the culture it means you are bringing a new flair. Bringing something new that is unmatched. Bringing that freedom to create against how I play, you create a new silhouette — something that can withstand for ages and stands alone.”

Nethongkome agrees and reminds that the KYRIE 4’s “visual expression is lead by the solution.” 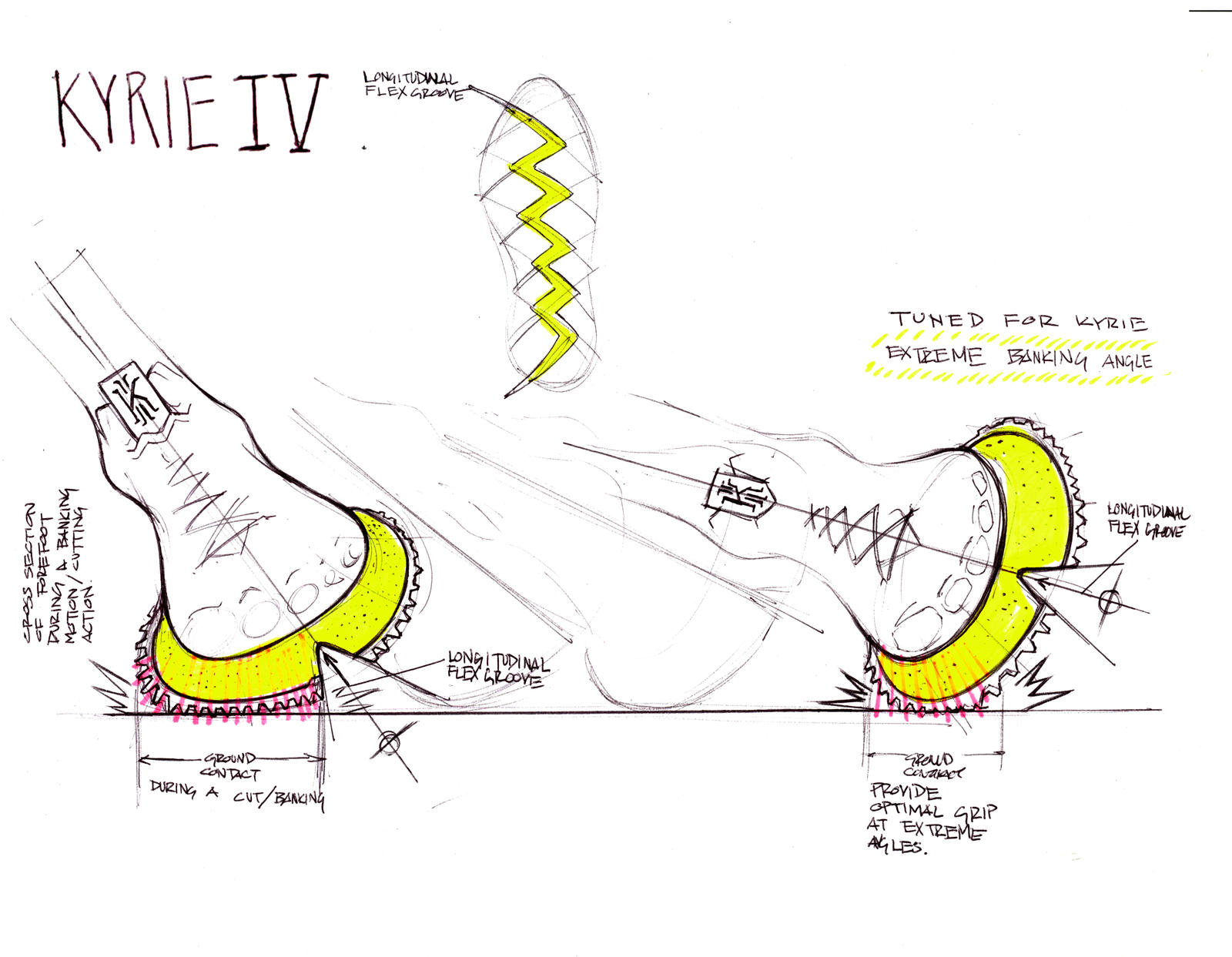 The KYRIE 4's zig-zag flex grove enhances traction and response from side to side.

Secondarily, the material choices and blocking are influenced by Irving’s interest in vintage Nike and Jordan silhouettes  — a passion shared with Nethongkome.

In those vintage basketball shoes, Irving sees “the authenticity of a performance shoe — something that hits all the marks as a basketball shoe — matched with really good looks.” Nethongkome echoes this with an industrial designer’s added caveat: “Those shoes are classic because they are deeply rooted in innovation.”

The KYRIE 4’s blocking follows suit. The forefoot is built of a zonally engineered mesh, an upgrade from previous KYRIE silhouettes and one that provides both containment and a softer feel. The transition to the heel introduces more classic materials — many versions of the KYRIE 4 will carry a suede or leather — which not only feel great but offer opportunity against a new challenge: how people watch the game today.

Fully aware that the classics of the past were feted over a full 48 minutes and memorialized in static posters, while today’s icons are cemented in 15-second mobile video clips, Irving acknowledges that shoes now need to “be both more innovative and more creative.”

He and Nethongkome honor what they call “the speed of eye test,” always trying to ensure that there is an “instant recall.”

“We want specific things that stand out and spark a memory and draw people back. They don’t need to want the shoe right then and there, but they need an initial spark in 30 seconds,” Irving explains. “The blocking is one of the things we discussed, to isolate parts of the shoe and bring them to life. That’s something I want within the shoe and it extends the details of this masterpiece.”

Irving carries around a piece of confetti from the last game of the 2017 NBA Finals as a constant reminder of how it felt to fall short of victory. The Confetti colorway honors Kyrie’s win-or-learn mentality.

The KYRIE 4 Confetti launches at House of Hoops locations in Boston, Cambridge, Harlem and Wayne, New Jersey, as Irving laces up when the Celtics play the Jazz in Boston at 7:30 pm EST. The colorway releases December 16 on SNKRS and at select retailers.

The KYRIE 4 blk/wht is available December 20.