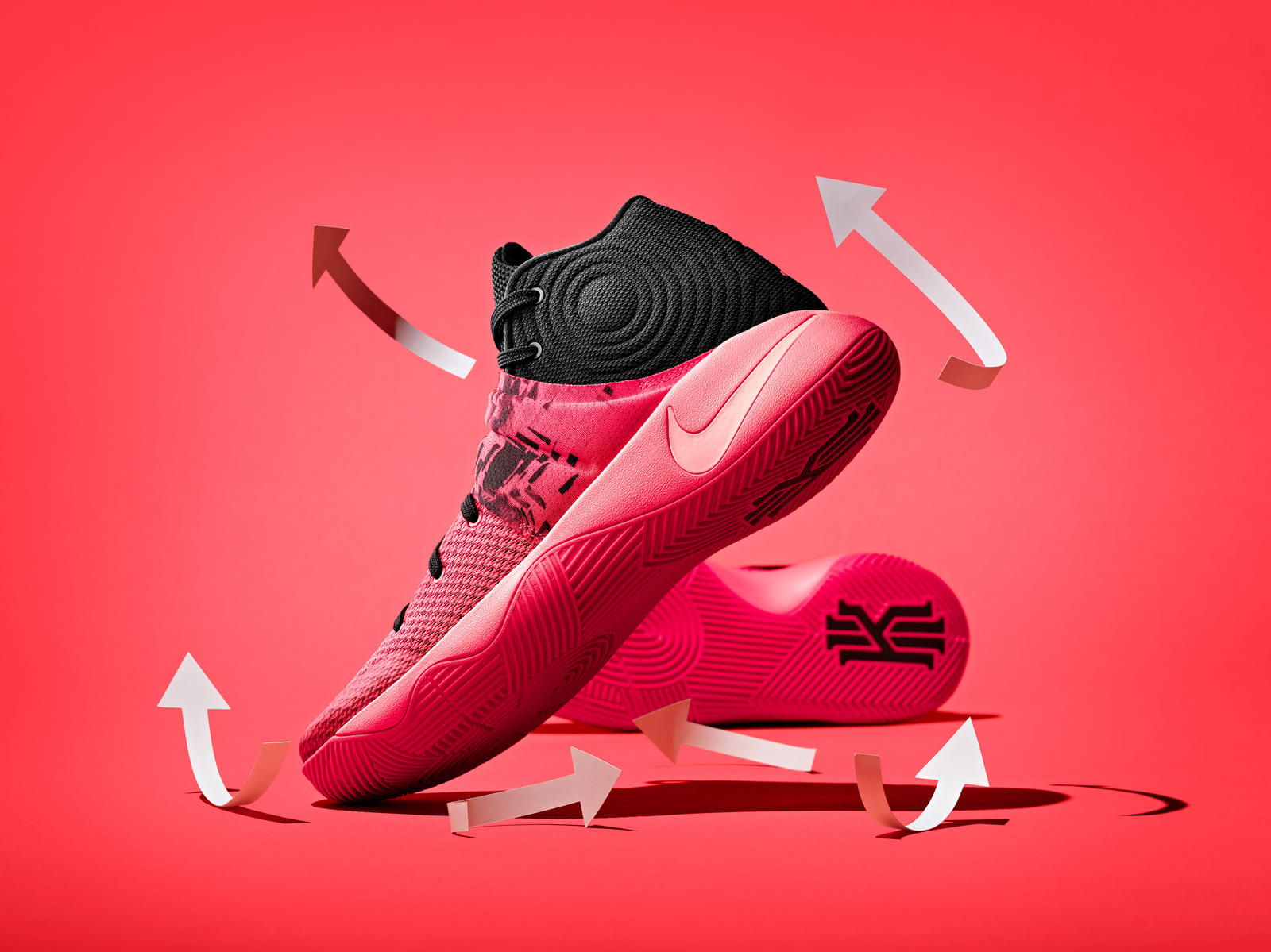 The KYRIE 2 is designed and engineered to the specifications of the All-Star point guard.

Cleveland point guard Kyrie Irving pushes the boundaries of Sir Isaac Newton’s laws of motion in ways that Dr. James Naismith, credited with inventing the game of basketball, never would have imagined. This movement informs the unique architecture of Irving’s second signature shoe, the KYRIE 2, complete with a first-of-its-kind curved midsole and outsole, designed to enhance intense banking and cutting.

Irving has one of the most devastating crossover dribbles the game has ever seen.

“With an average ball speed of 21 miles per hour — nearly twice as fast as an average NBA player’s dribble — Kyrie can complete a crossover in less than one-third of a second,” says Brenkus.

Pushing off the court with 770 pounds of force at a sharp 40-degree angle, Irving can experience four g’s of acceleration during the crossover. (To put this number in perspective, that’s a g-force greater than the average astronaut experiences during a rocket launch). In other words: Irving needs footwear that performs under extreme pressure. 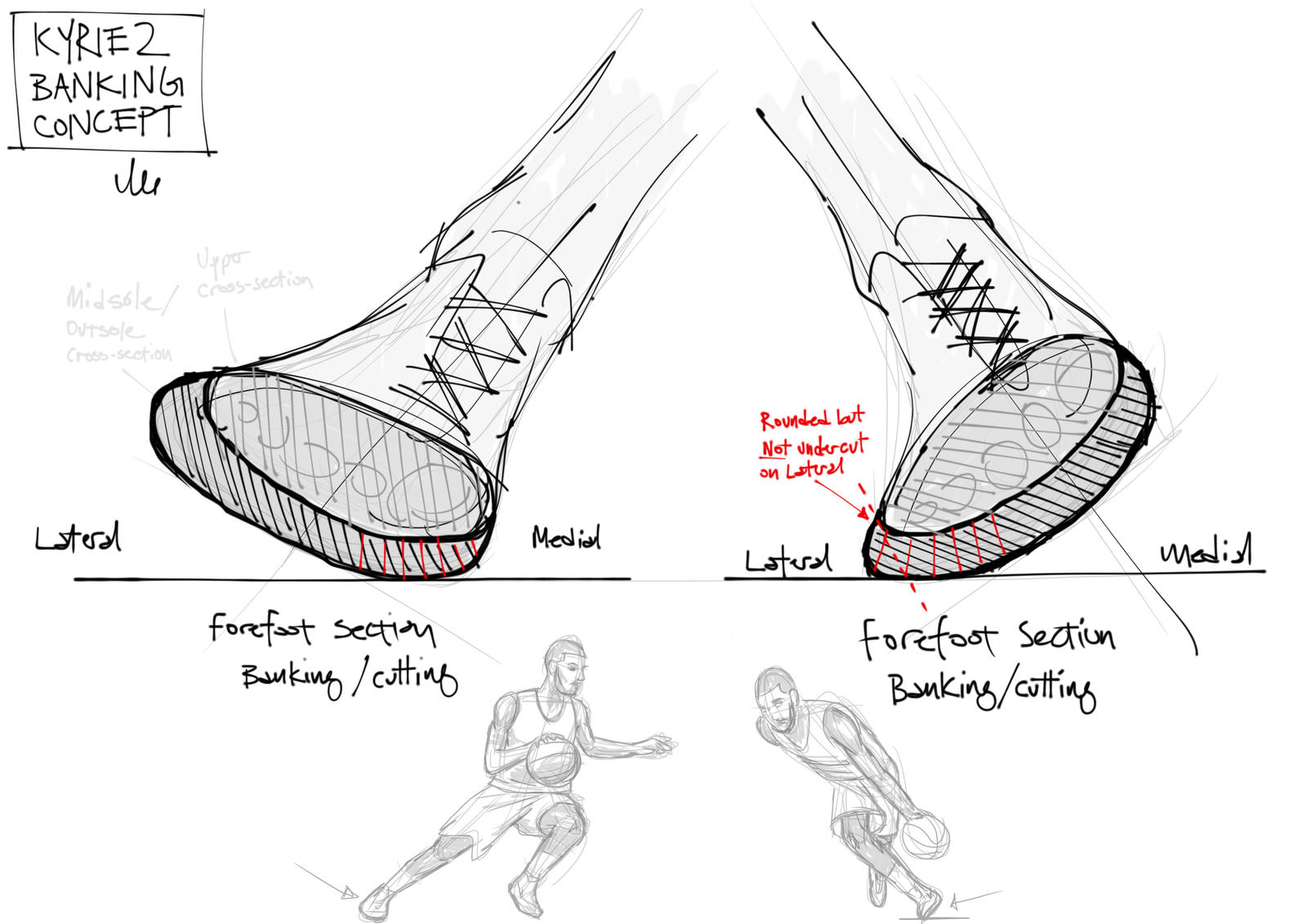 After continuously observing Irving’s ability to position his body in such low angles that the sides of his shoes engaged the floor, Nike introduced a curved bottom surface of the midsole and outsole. The rounded geometry positioned at the medial heel and across the metatarsals heads allow Irving to redistribute his weight and cut on a dime, without slapping his foot to the court and decreasing his power output. 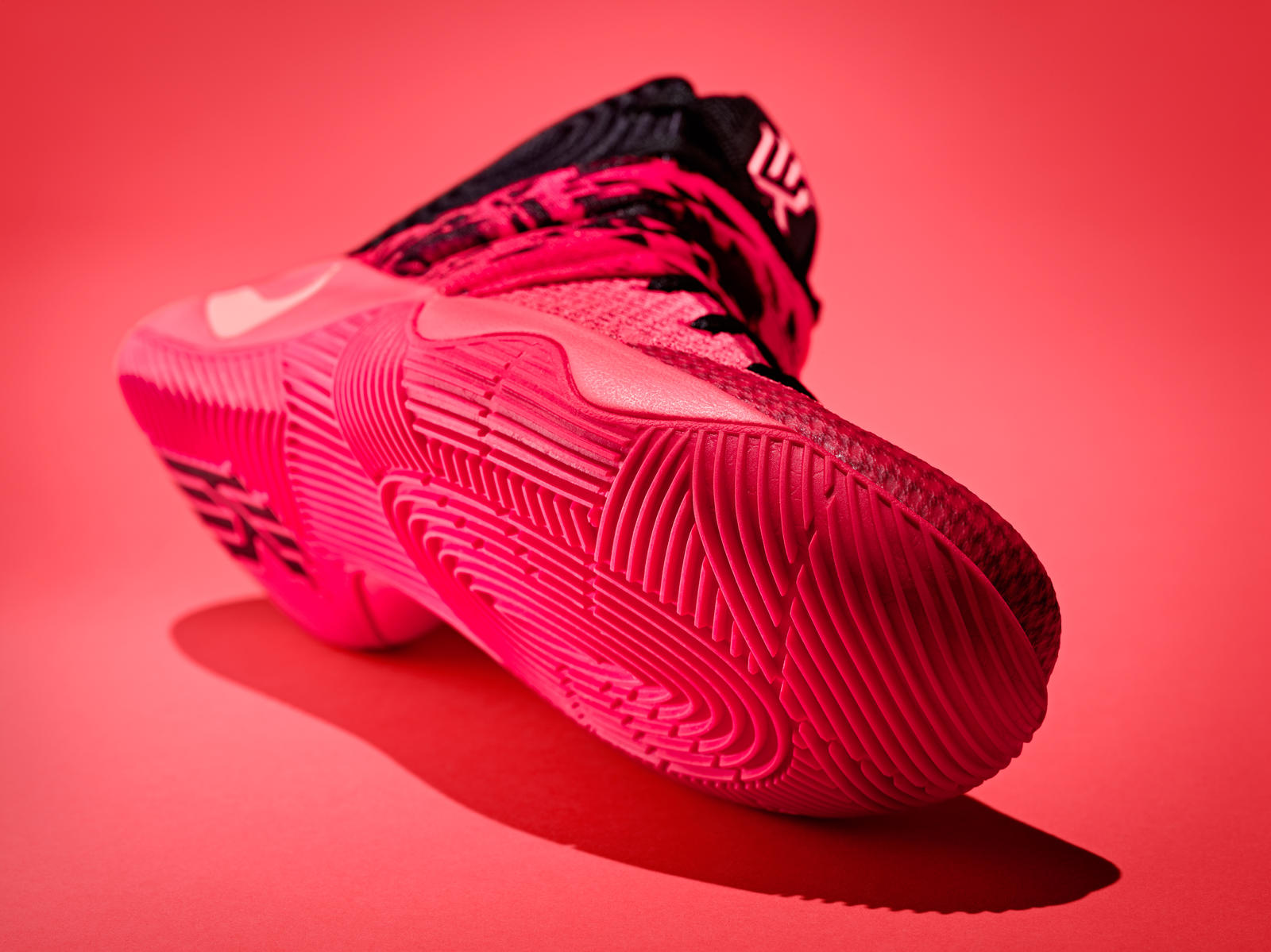 Irving's biomechanics and movement drove the angles and articulation of the midsole and outsole.

As we know from Newton’s third law – for every action there is an equal and opposite reaction – the KYRIE 2 needs to support the tremendous amount of force Irving applies to the floor and then return it, permitting the point guard to fly off his edges with intense speed that penetrates the defense.

“It’s almost as if your body weight is bouncing off a ball,” explains Nike designer Leo Chang of the rounded sides. Taking into account the All-Star’s level of force and acceleration (think Newton’s second law: Force applied to a mass causes a change in velocity), Nike also amped up the traction pattern around the curved periphery, offering extra grip that enables Irving to transition his movement laterally, with unrivaled accuracy.

“You always want to have second, third, fourth, fifth and sixth moves [so] that the defender just gets tired and doesn’t want to guard you anymore,” says Irving of his unrelenting attack strategy.

Irving doesn’t just keep defenders on their toes with his lightning quick acceleration. He also uses his deceleration to his advantage.

“Kyrie can decelerate from 13 miles per hour to virtually zero in 0.2 seconds,” says Brenkus. “From there, he’s able to pick up the dribble and get off a shot in just 0.49 seconds.”

“On a step-back jumper, the point guard can create six feet of separation in only 0.37 seconds and then launch himself off the court so that the ball is released nine feet in the air,” Brenkus adds.

When you have that much momentum and abruptly stop — according to Newton’s first law — your body wants to continue its forward motion, unless acted upon by an external force. That’s where the KYRIE 2’s traction pattern and strapping system (which wraps over the top of the foot, instead of around the ankle) comes into play.

“The strap is designed to suck your heel back into the shoe and keeps it secure, whether you’re accelerating or decelerating,” says Chang. Similar to how a boxer doesn’t want his hand to move inside the glove when it hits his opponent, Irving’s feet should feel snug when they reconnect with the ground.

Zoom Air in the heel is also utilized to transition Irving faster from heel to toe during acceleration while also providing impact protection during deceleration.

Kyrie’s Unrelenting Drive to the Hole

“Starting from a standstill at the three-point line, Kyrie can get to the rim in as little as 1.5 seconds. That’s 15-percent faster than the typical NBA point guard,” says Brenkus.

Irving is a destructive-yet-smooth master of deception, cutting and even spinning during the crossover with such finesse that he’s already made his way into the paint before the opposition can take recourse.

“On a drive from the three-point line, his feet generate more than 1.5 tons of cumulative force,” explains Brenkus. That means defenders should get out of the way, because, as Newton’s second law warns, Irving is coming through.

“He can also shift his forward momentum twice in just four-tenths of a second, which is about as long as it takes to blink your eye,” explains Brenkus. One flick of the eyelid and the man guarding the All-Star point guard already missed him.

The new outsole traction pattern, enveloping the forefoot sidewalls and spanning the entire bottom surface of the KYRIE 2, offers dynamic traction when Irving is attacking at all angles, adds the designer.

Since Irving is applying force to hardwood (a mass too great for a player to move), the floor will provide an equal and opposite reaction – so corroborates Newton’s third law – and propel him forward. Responsive cushioning in the midsole makes for a fast first step, while a large pivot circle on the forefoot of the sneaker allows Irving to pivot, switch directions, pull off those signature spins and effectively put the defender in the blender.

Now that you’ve studied up on physics and thoroughly analyzed Irving’s ankle-breaking moves, you’d no doubt ace a final exam. For Nike, however, the real test is putting Newton’s laws into actual motion. The KYRIE 2 Inferno colorway is available now on nike.com and retail locations globally. 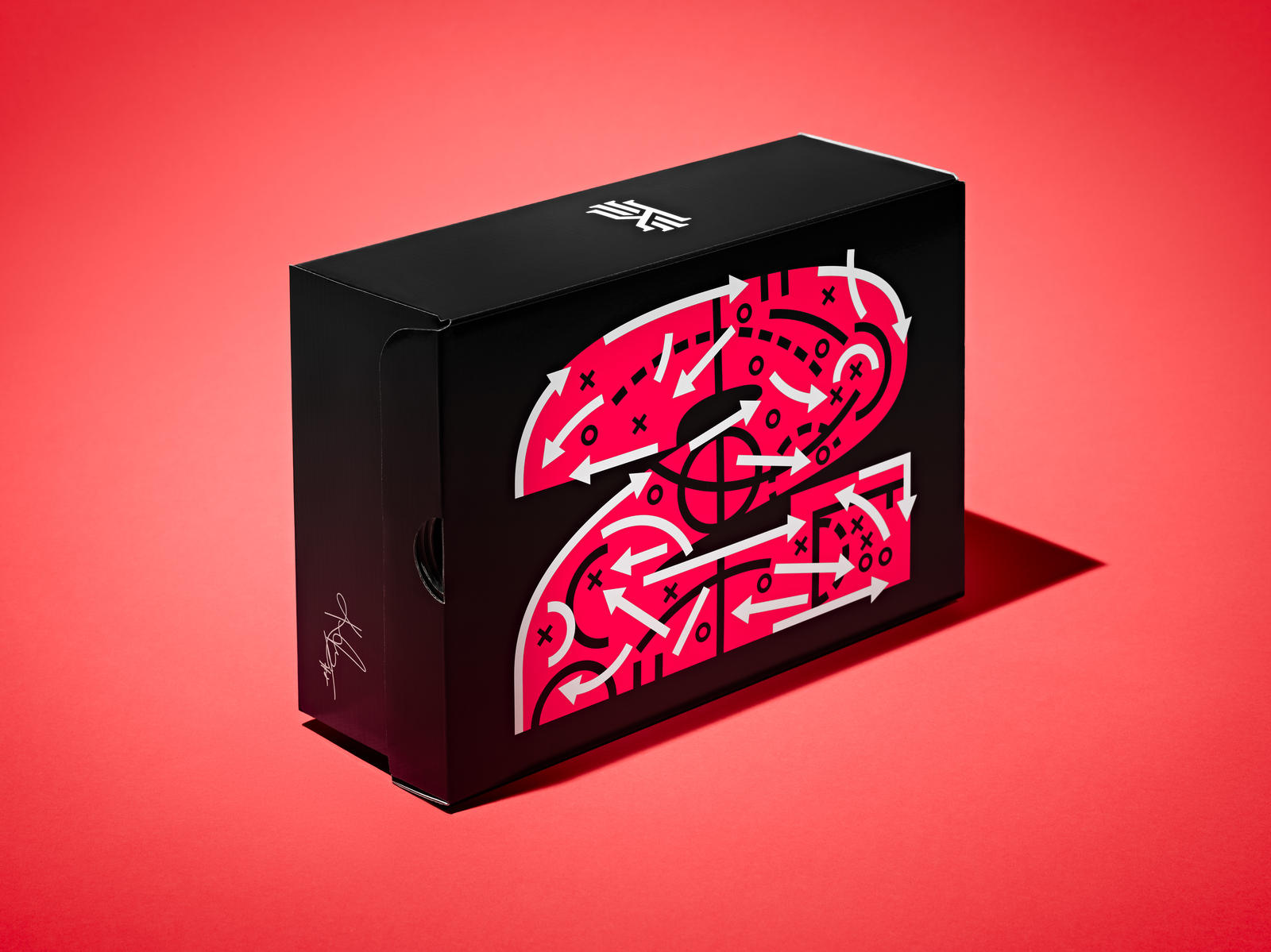