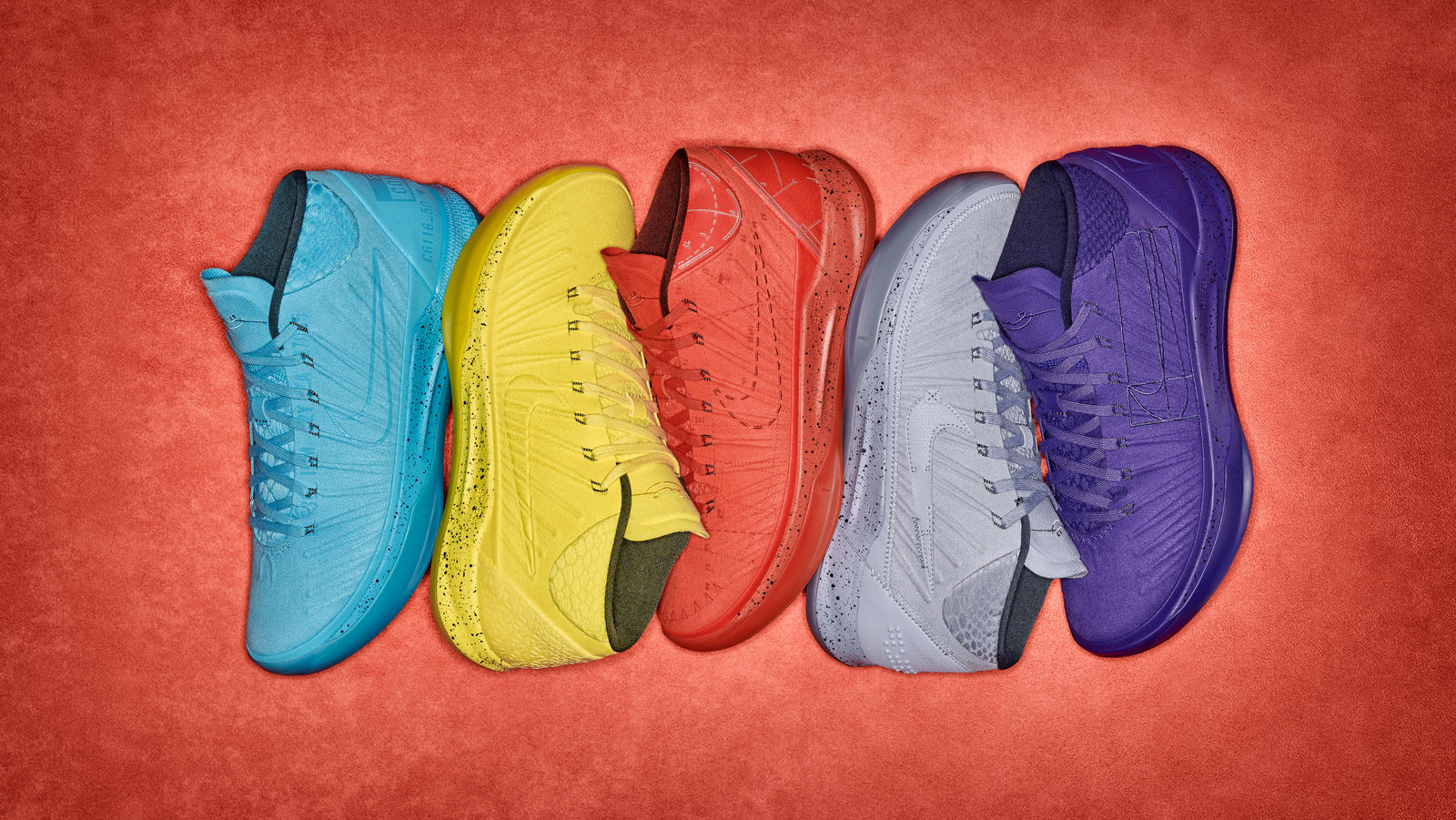 Kobe Bryant’s Mamba Mentality encompasses both the physical and psychological elements of basketball. While his passion for practice and training is well documented, the five-time champion’s curiosity about the external factors that influence human behavior is lesser known. One aspect of that interest is the psychology of color — particularly in understanding the correlations between color, attitude and emotion.

The all-new, mid-top KOBE A.D. shoe applies Bryant’s intrigue of how color personally affects him to a five-shoe collection illuminating the origins and depth of his unyielding quest for improvement.

In true Bryant fashion, each makeup is informed by science but viewed through a unique Mamba lens. This color inspiration combines with the following performance benefits: 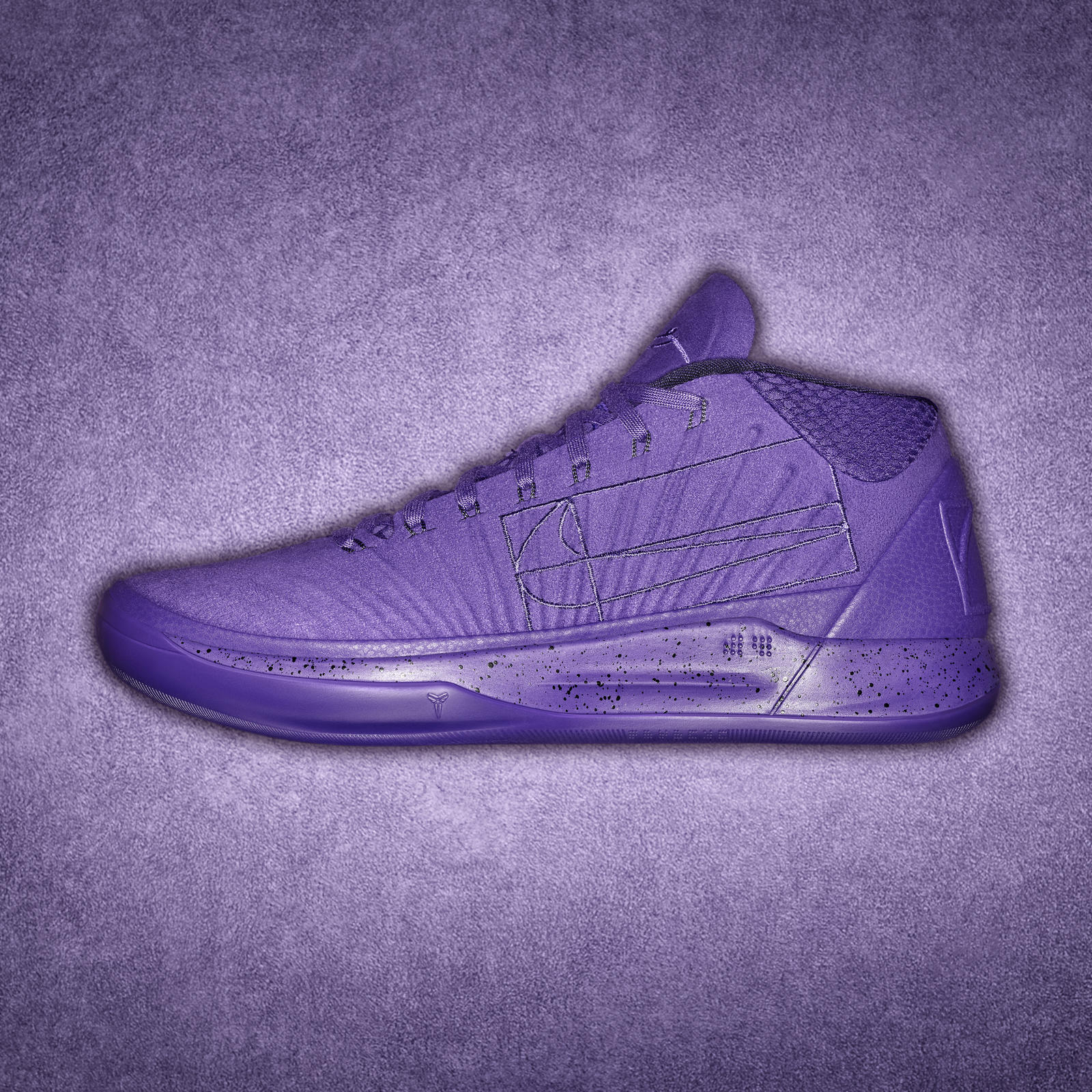 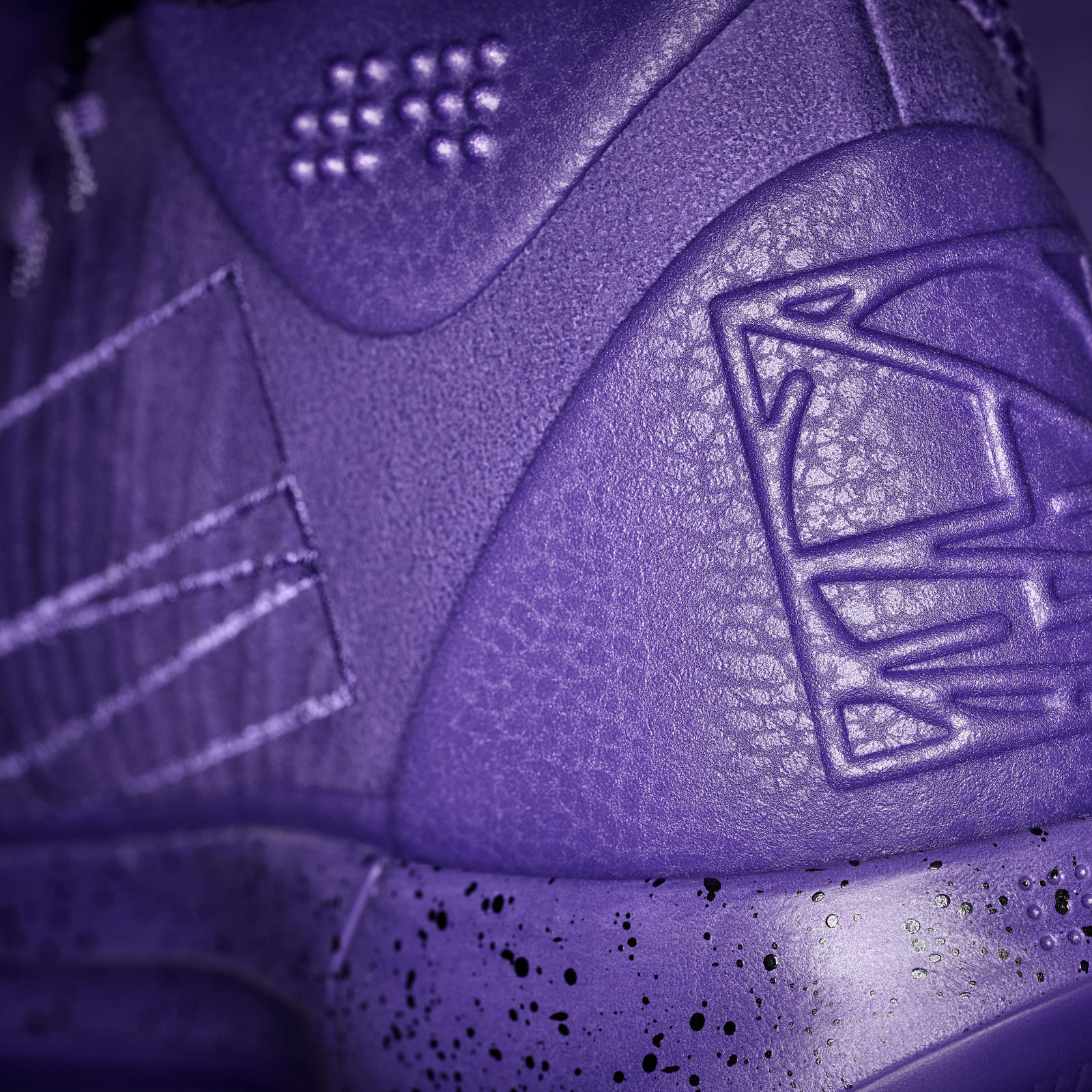 For most, the greatest fear in the world is the fear of the unknown, but Kobe fears virtually nothing and no one, a trait synonymous with the Mamba Mentality. “Fearless” honors the element of Mamba Mentality that inspires the courage to seek out the world’s best competition, knowing that in order to be the best, you must beat the best.

Red is acknowledged as a symbol of passion. 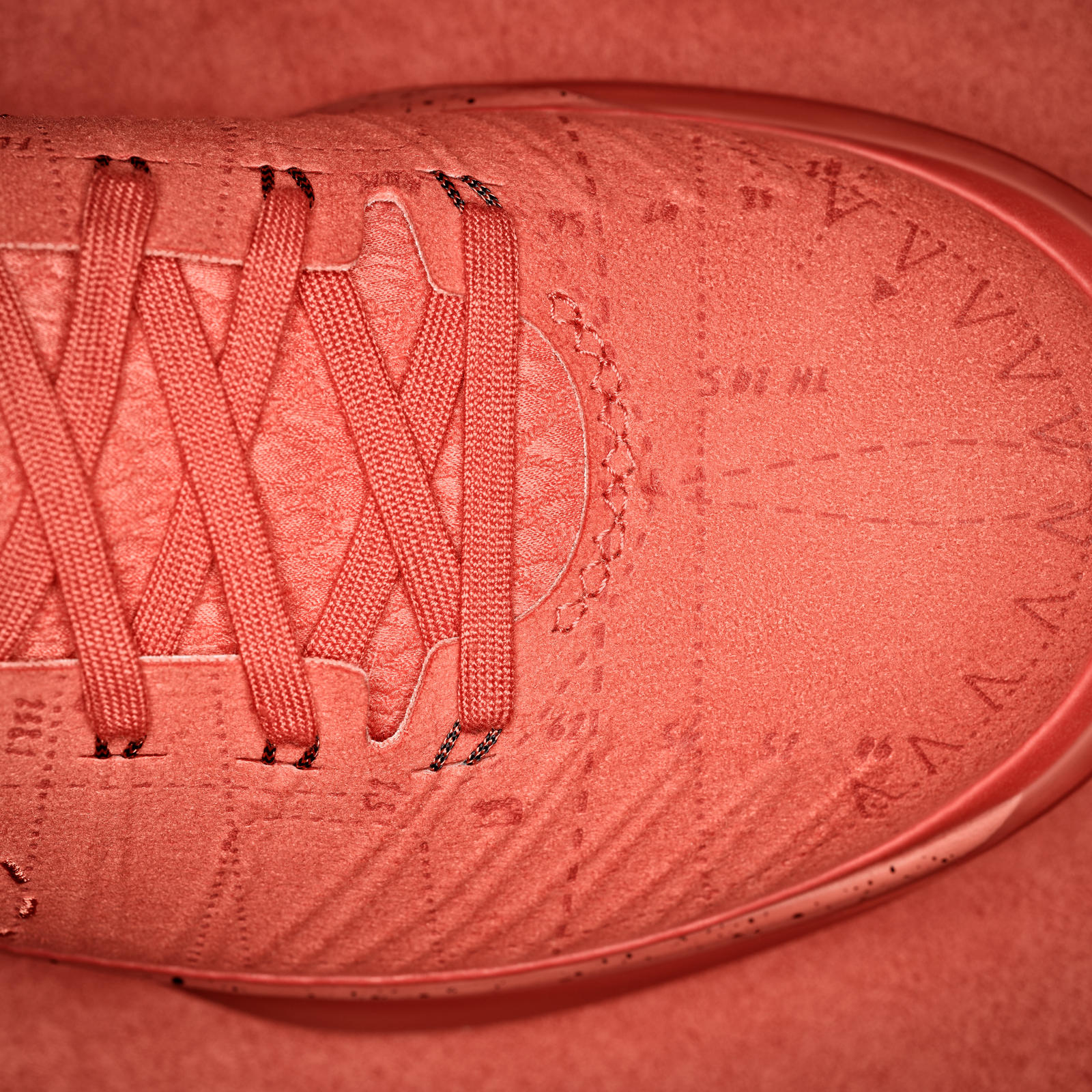 The pattern markings on the shoe represent when passion drives vision. 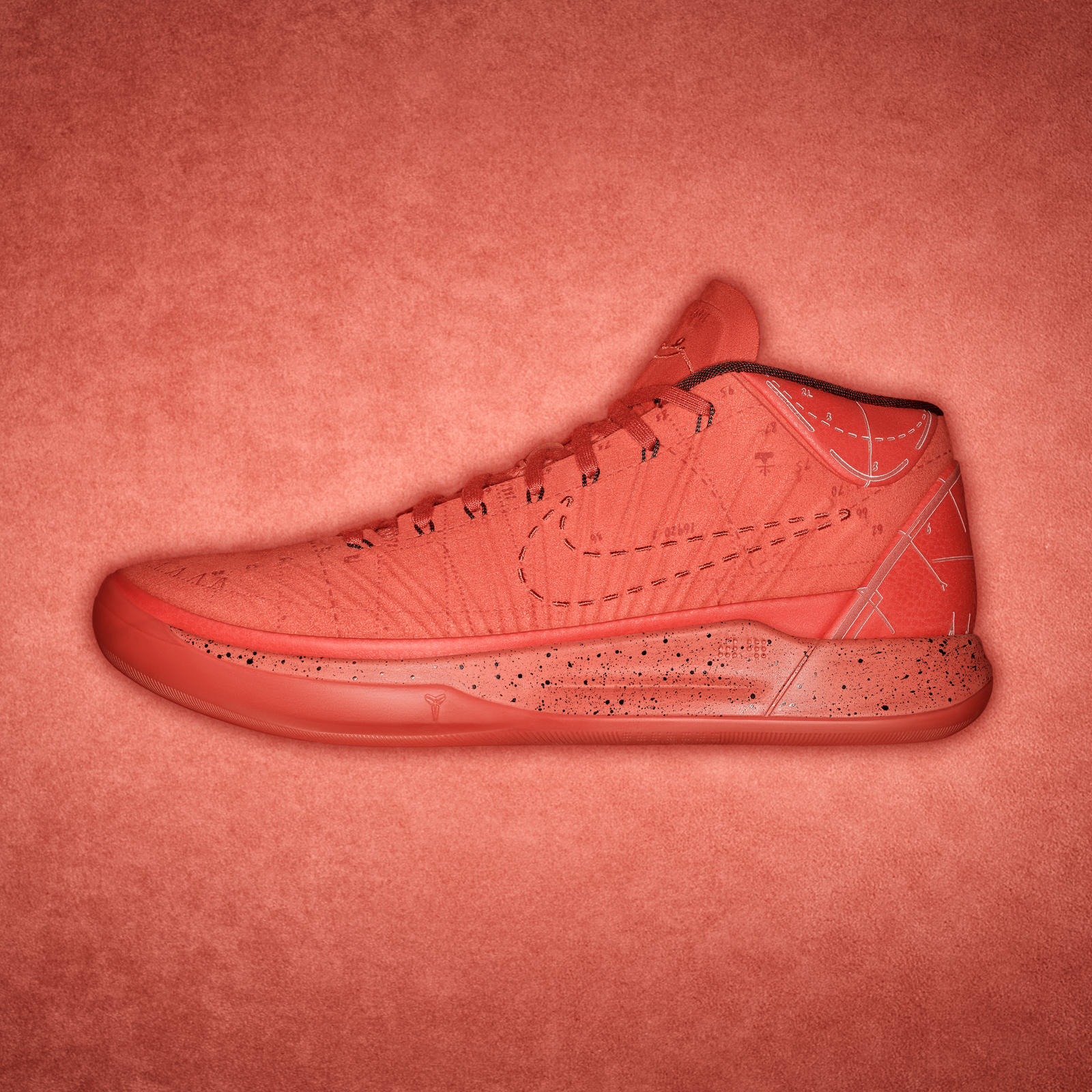 The "blueprint" state of an upper wraps the entire shoe.

Fueling his pursuit of greatness is an innate infatuation with beating his opponent, taking game-winning shots, chasing championships and obsessing over everything that falls between the lines of the court. “Passion” honors the element of the Mamba Mentality that inspires a maniacal love for the game and an instinctual obsession to succeed at all costs.

“Nothing can kill my passion for basketball,” reminds Bryant.

Yellow and positivity go hand in hand, or as some say, “amongst the clouds there is always the sun.” 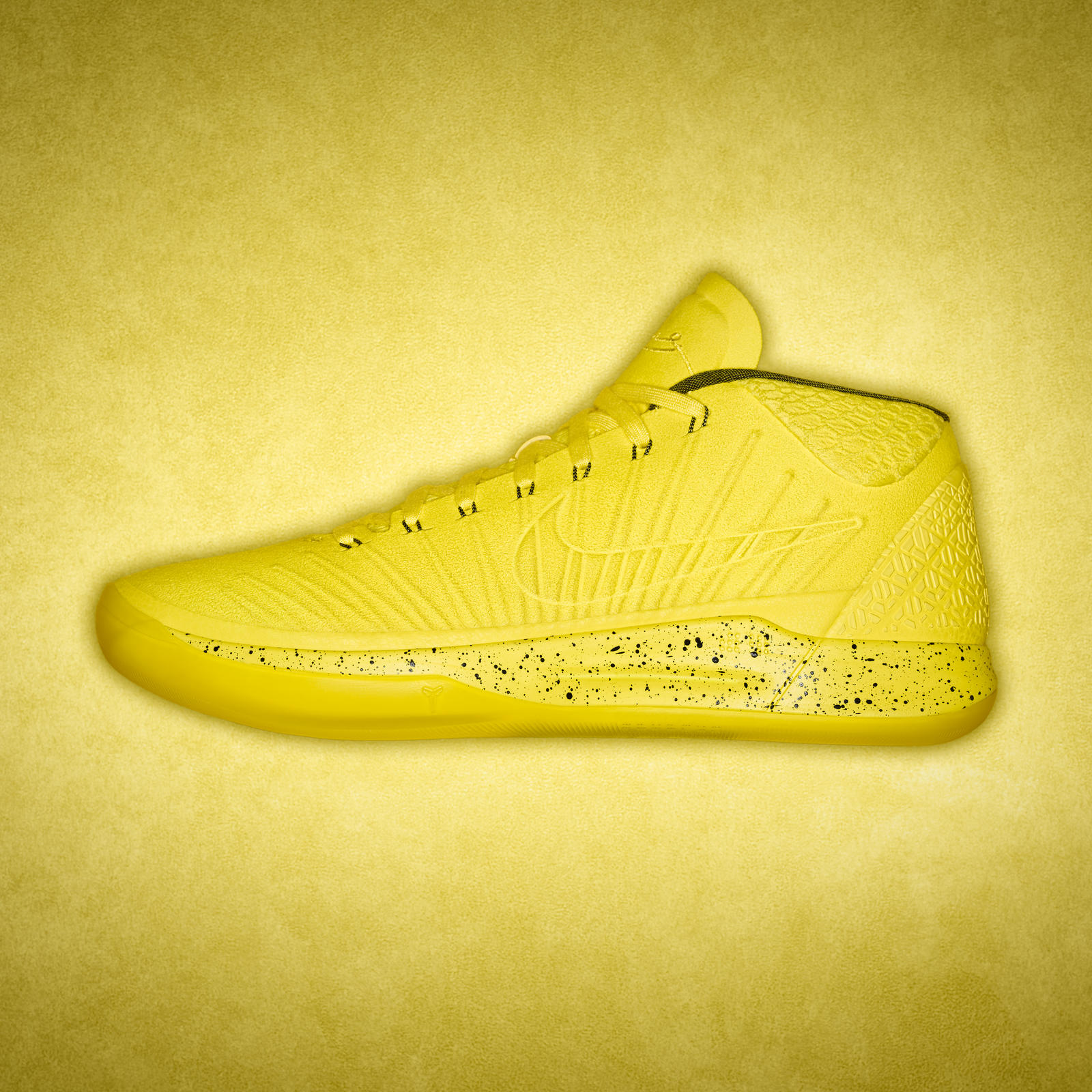 Inspired by moments of Kobe’s internal determination and negative criticism, the Swoosh and heel of the shoe depict a sense of heightened relief. 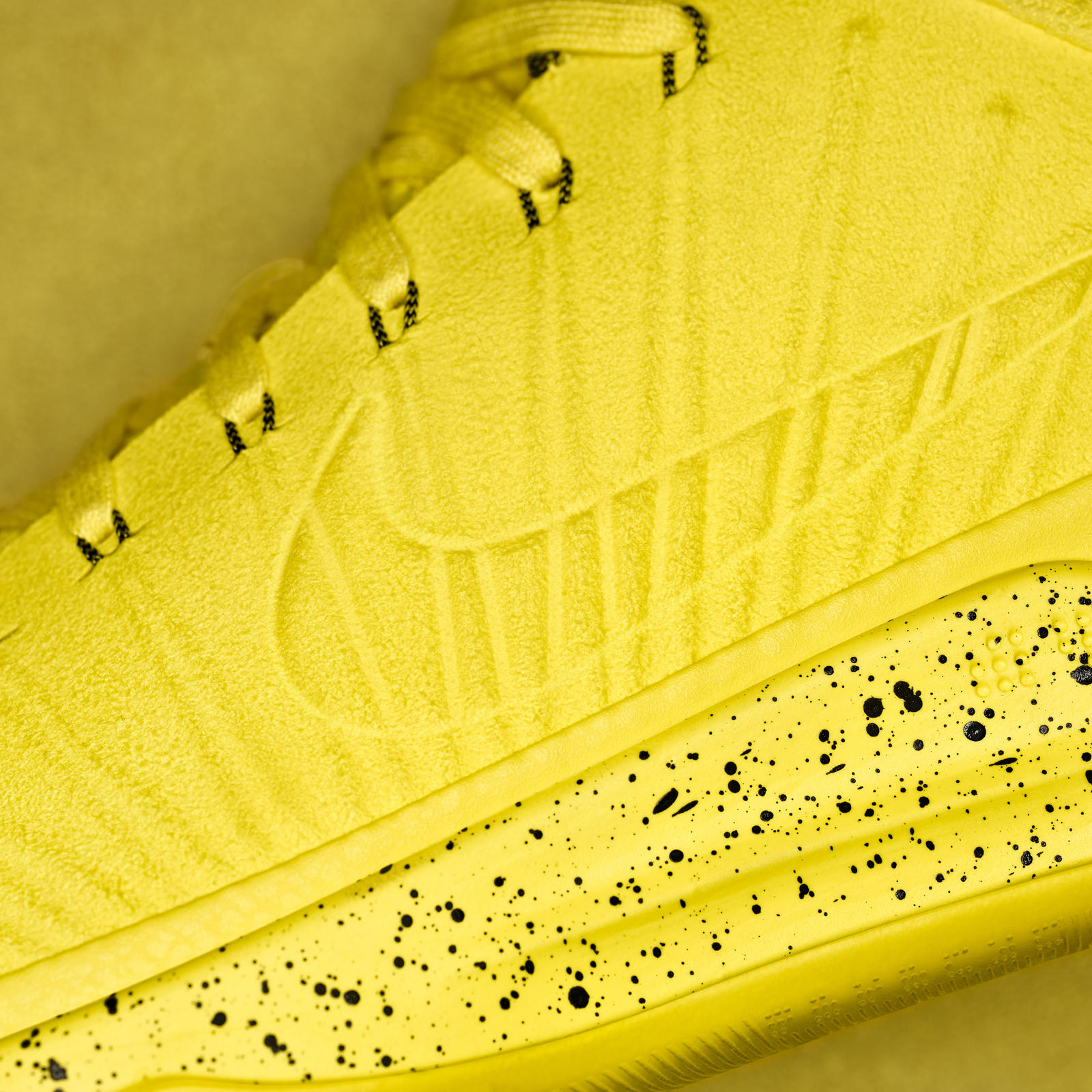 In his relentless pursuit of greatness (which some critics consider unrealistic), supreme belief is critical. When others doubt Bryant, it propels him to believe in himself more, ultimately proving that he should never be doubted again.

“No setback ever kept me from playing my best game of basketball. I kept a positive mindset through thick and thin,” says Bryant. “Everything — the good and bad — was a learning opportunity.”

That approach to the game allows Bryant to persevere when many others doubt him. He believes 100 percent, which is nothing short of pure optimism. 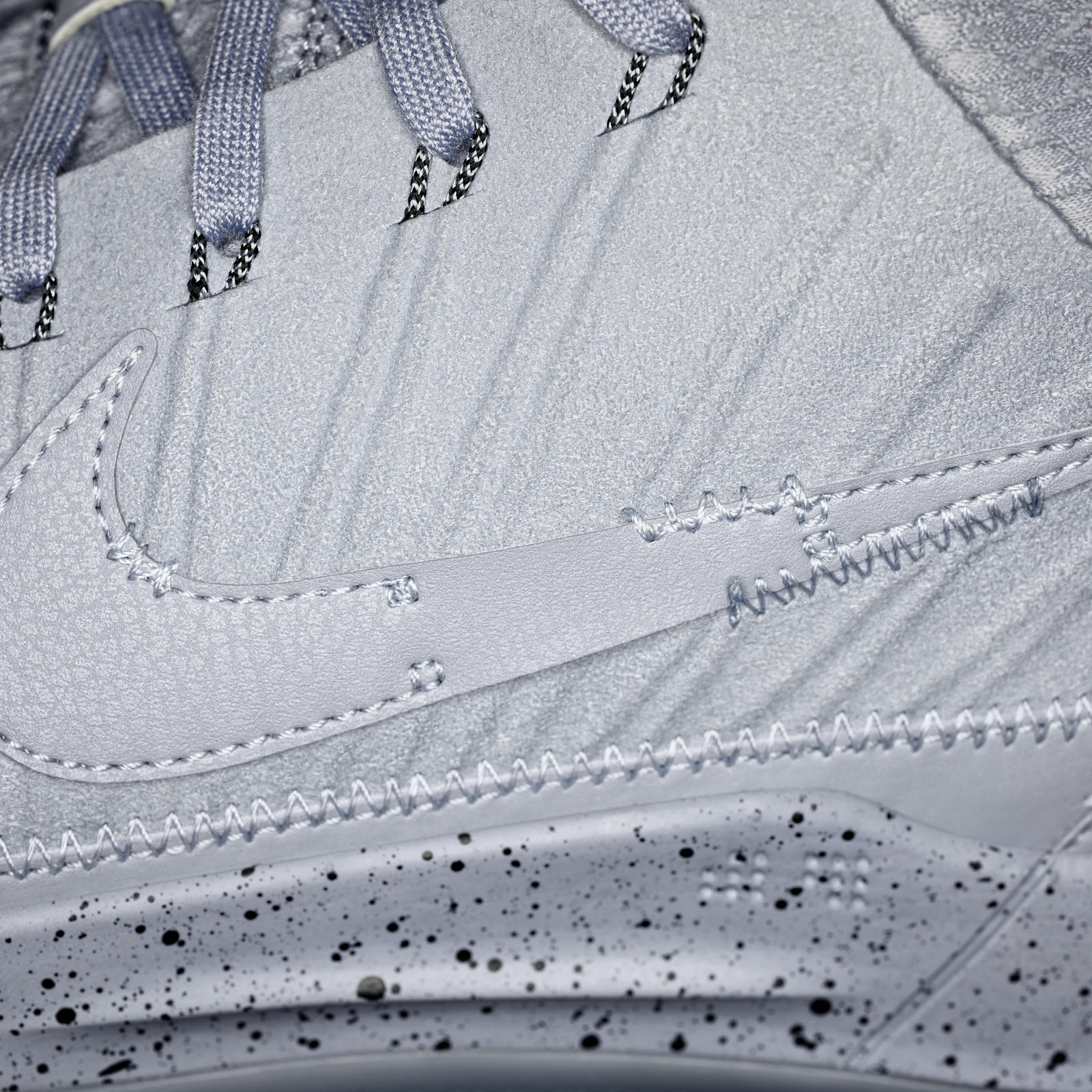 The utilitarian upper is real, raw and natural. 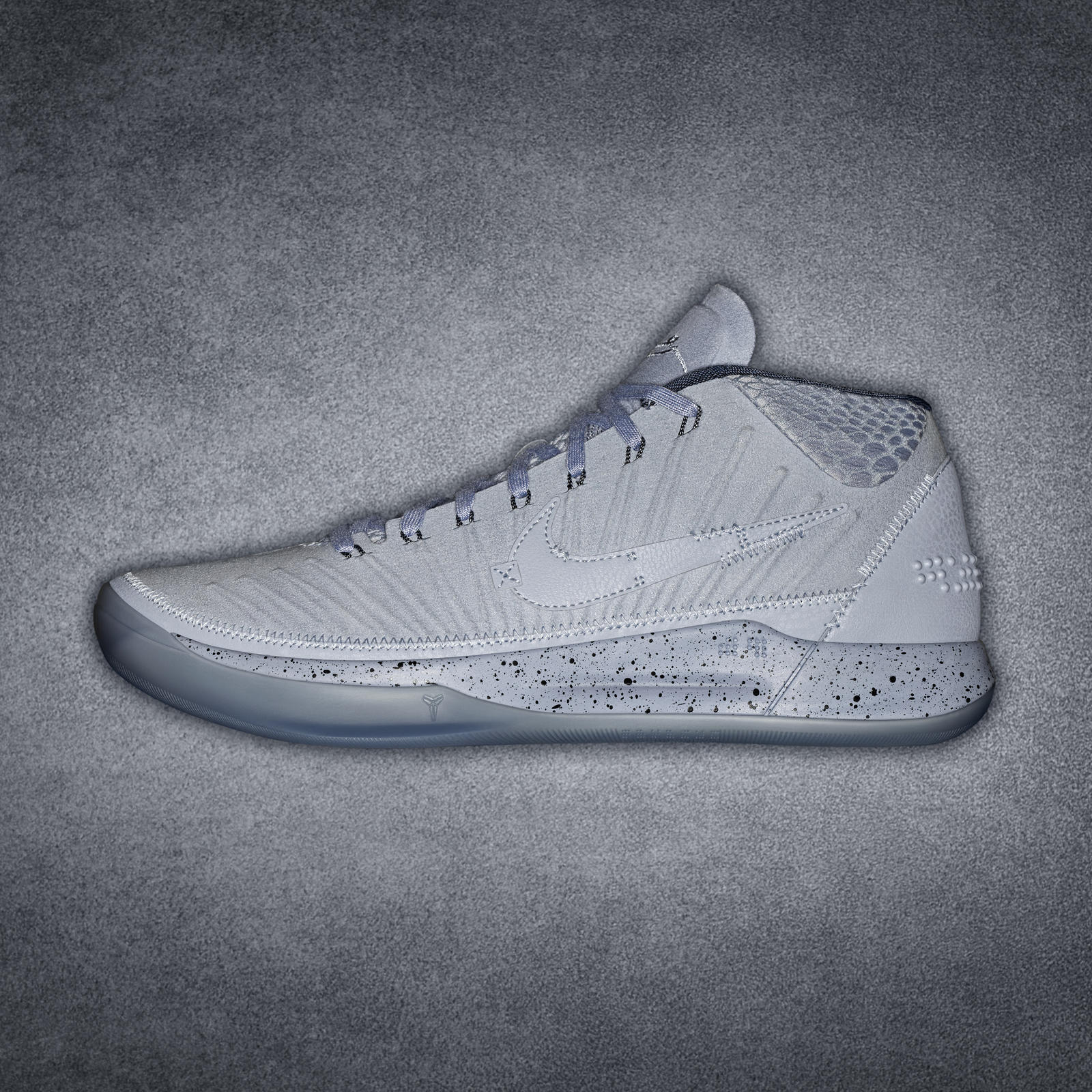 Each element from the Swoosh to the heel feels particular, providing distinct moments of clarity within chaos.

Bryant’s merciless approach to the game means championships are worth more than friendships. He works to remove all emotional connection to any distraction, including office dramas, superstar squabbles and media doubts. His mantra in isolation is clear: “Friends may come and go, but banners hang forever.”

For many, the color blue relays dependability and trust. Bryant equates those traits with honesty. 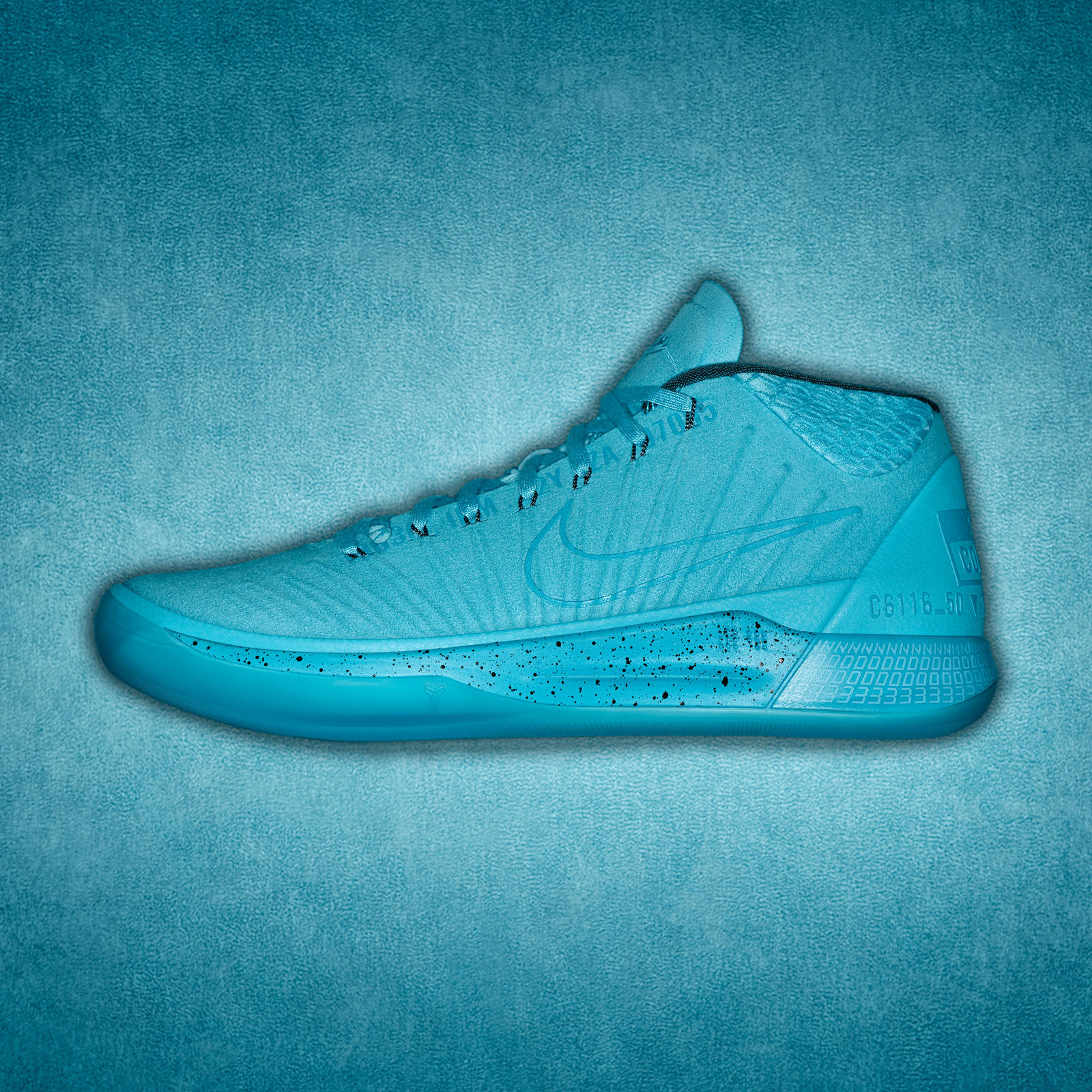 Improving and accepting feedback is at the heart of Nike Basketball design. On this model, consumers wanted more cushioning. 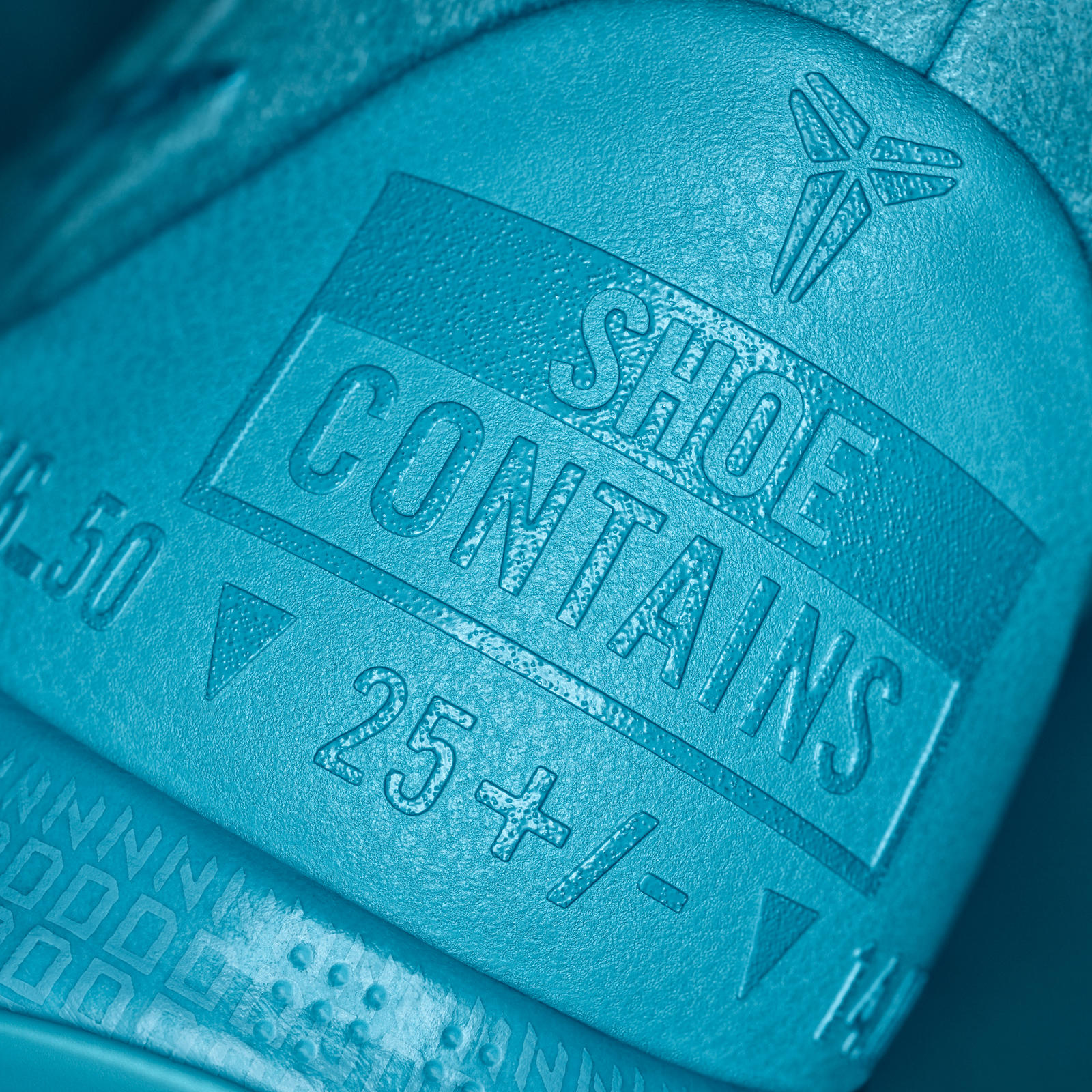 The response is a 14mm Nike Zoom Air bag.

According to Bryant, one crucial fault in people who fail to achieve greatness is an inability to accept candid feedback. Rather than ignore criticism, he embraces honesty. He knows that accepting imperfection allows him to better himself.

“There’s no such thing as perfection in basketball,” says Bryant. “Perfection is minimizing mistakes. Digging deep and being honest with yourself, where you are, where you want to be and how you can get there allows one to process and accept shortcomings in order to improve,” says Bryant.

The five KOBE A.D. colorways connecting to color psychology are available globally starting August 24 as a nod to both of Bryant’s uniform numbers.