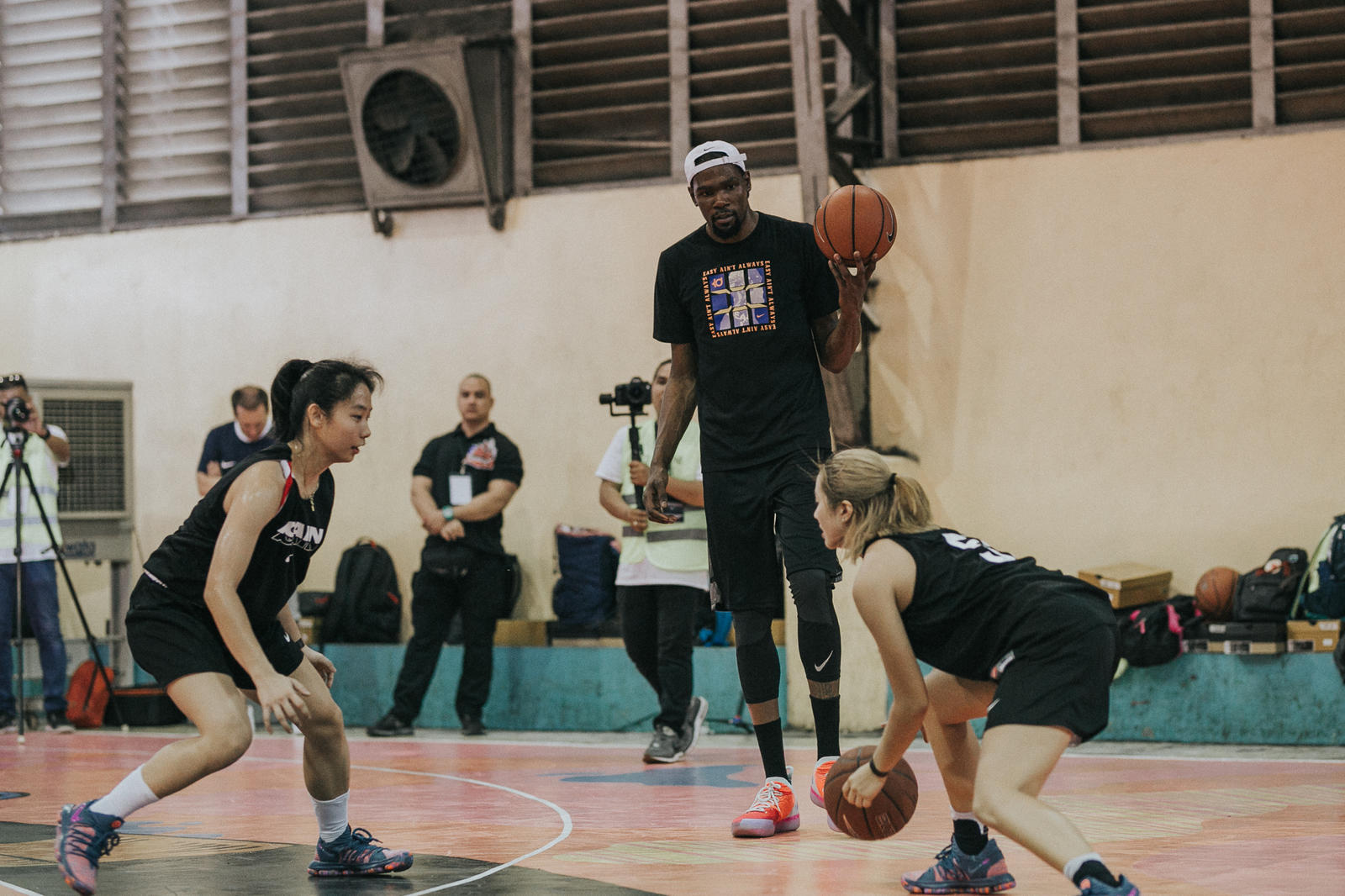 A group of male and female players from the Philippines experienced a "Rise and Grind" skills training camp led by Durant himself, continuing the two-time world champ's tour throughout Asia.

Since heading west to San Francisco in 2016, Kevin Durant has earned his place atop the world’s mantel twice over, winning back-to-back world championships and Finals MVP awards.

Durant’s influence on the global game within the last two years is clear, but the small forward has put big time overseas since 2009, when he was just 21 years old. Over seven trips to Asia, Durant’s had time to ponder his development both personally and internationally, both of which reached a critical high after his recent Finals-winning season.

During his 2018 tour — covering Guangzhou, Manila and Taipei — Durant opened up about his maturation over the last two seasons, and about how he’s adopted an increasingly global mindset to achieve newfound success. 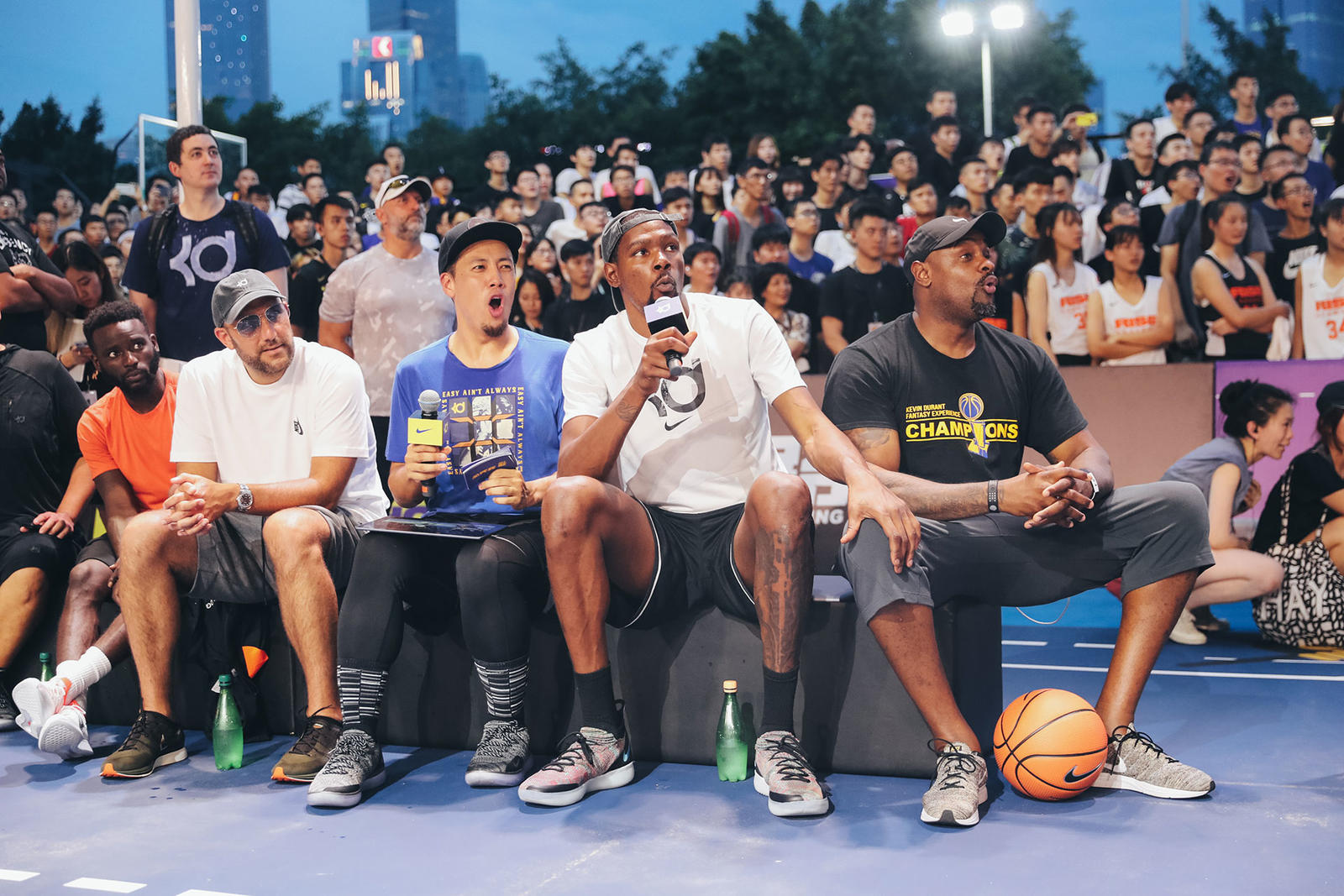 Watching on at one of Guangzhou's most popular one-on-one tournaments, Durant reacts to a play.

Durant brought a sharpened edge to different skillsets in the 2017-2018 season. His on-ball defense, for example, raised eyebrows throughout the year and put him in contention for (even more) postseason awards. That kind of growth required reflection on what new tools he could bring to his squad, without diminishing his prolific ability as a one-man force.

“I feel seasoned, more polished than I was back then,” says Durant. “I learned a lot about myself as a basketball player and what it takes to maximize my talents as a player. I felt like I figured that out about myself over the last two years, which has made me a better teammate overall, as well." 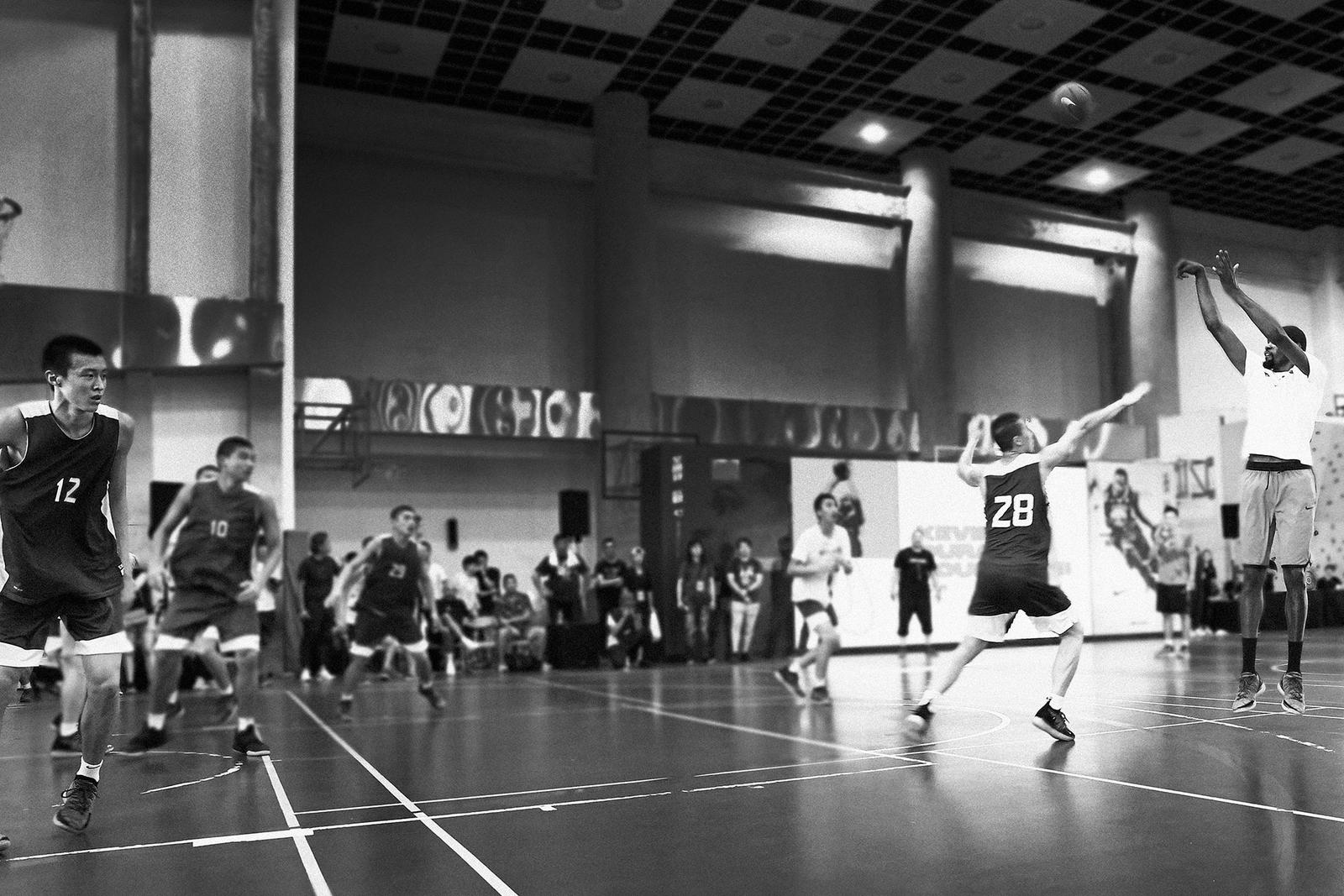 Durant pulls up from deep during a training session with the men's team from Taipei's Song Shang Senior High School.

The Global Awareness: Carry The Torch

Growing up as a young player, Durant remembers watching videos of Michael Jordan travel to Asia, sensing the distinct presence he carried overseas. Basketball is more popular than ever in China, and just as ambassadors like Jordan contributed in sparking a international interest in the sport, Durant sees it as his responsibility to bridge cultures through the game. “I believe it’s part of my duty as a basketball player to help the game evolve overseas, and to try to move the game in the right direction,” he says. 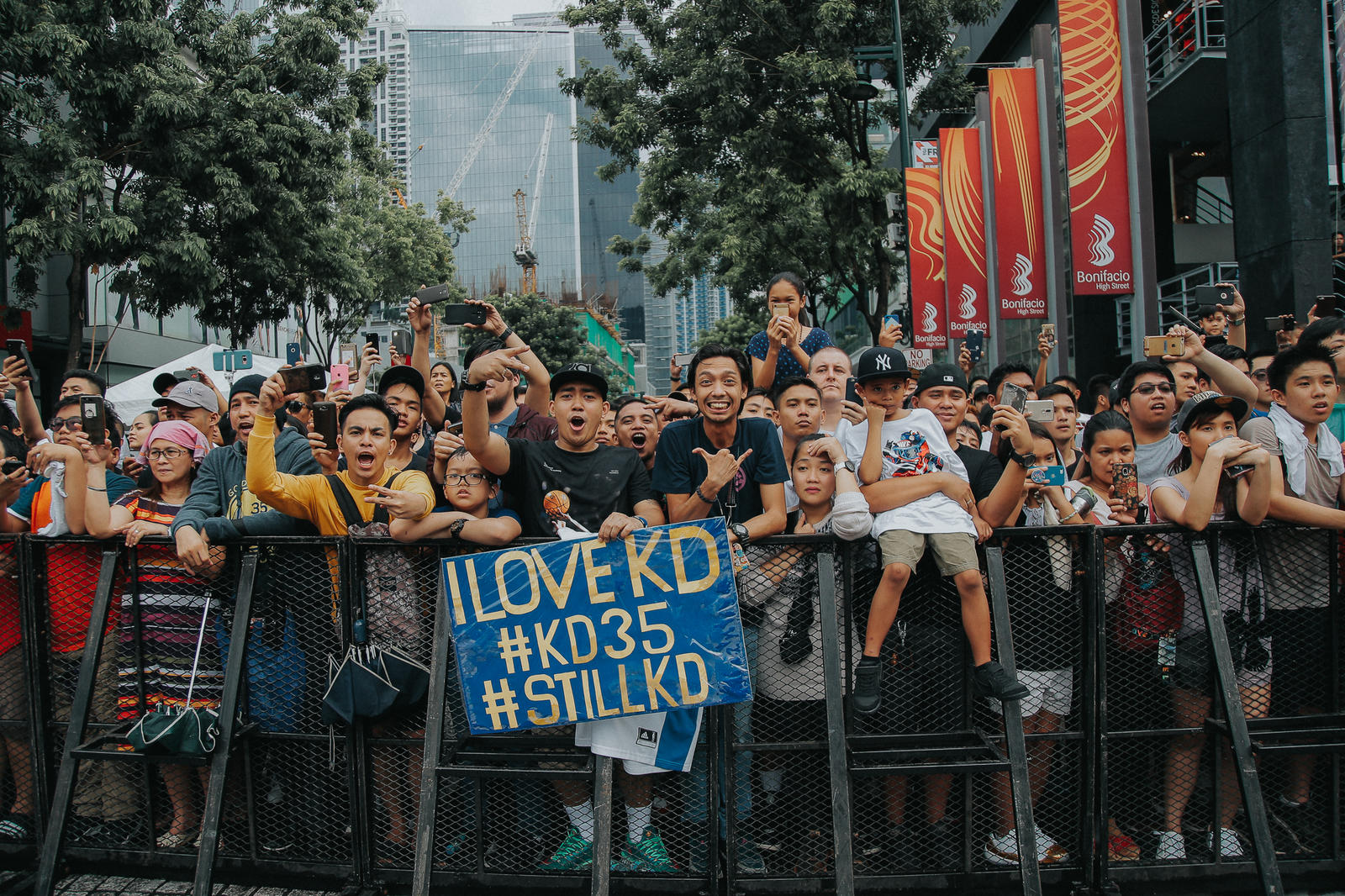 Durant was given a warm Filipino welcome in the streets of the Bonifacio Global City in Manila, greeted by about 1,500 fans who flanked the path with music, dancers and art-decorated jeepneys.

The Competitive Awareness: King of the Hill

A result of basketball’s growing popularity in Asia? The talent level is rising, with more and more young players eyeing the game’s top ranks. Durant recognizes that global exposure to the game has players aiming for Durant’s same accomplishments. When you become king of the hill, you’re instantly handed the task of defending your title. Durant’s not giving up one inch as he prepares for next season – and for the world’s next generation of players.

“You look at the national team here, and the players are continuing to get better, and are even setting goals of making it into the league,” he says. “It’s good to see that the game is growing. It’s taken a life of its own here.” 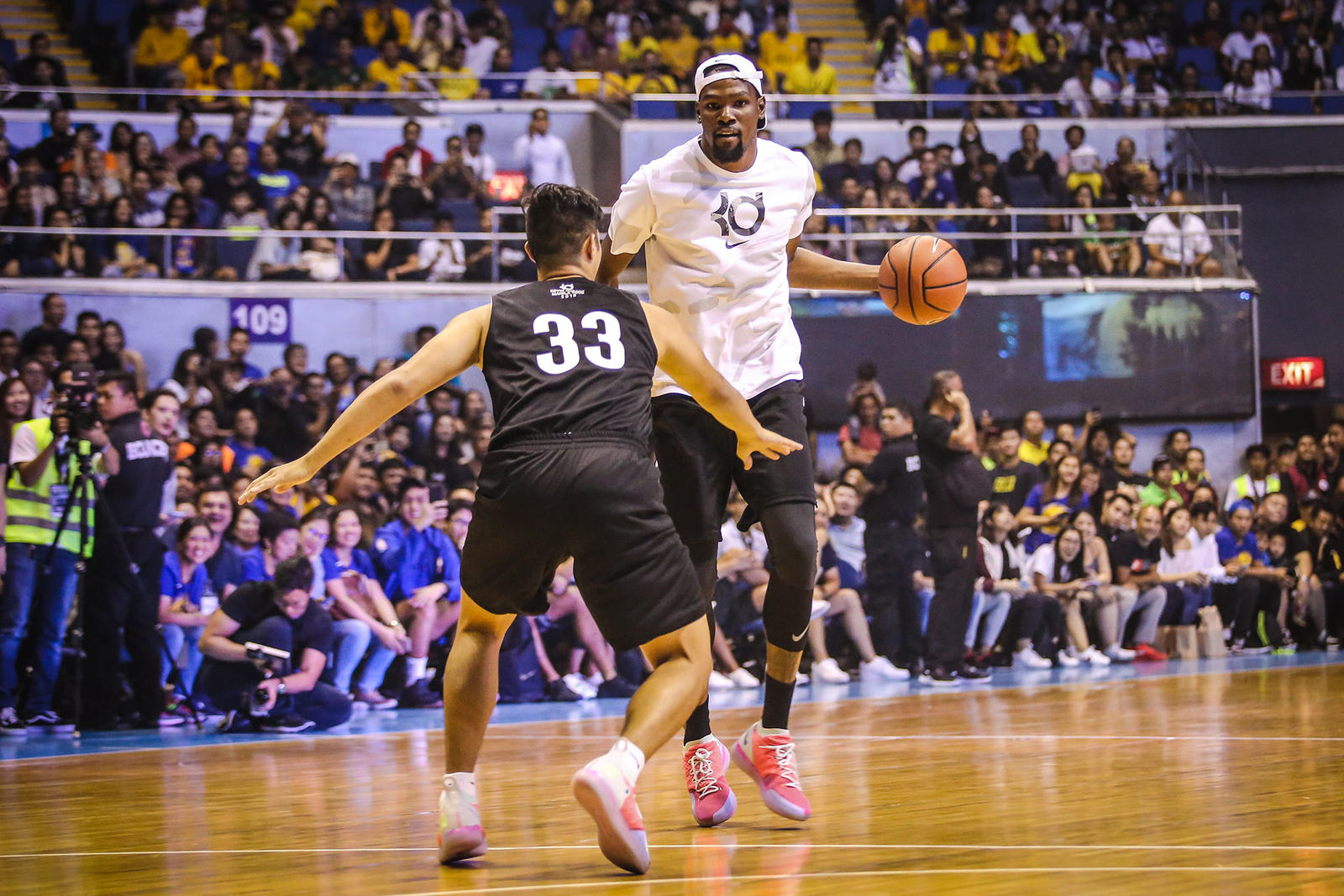 In front of 10,000 people, KD took the court with a team from the Philippines' elite collegiate athletics association, the UAAP, while he dazzled the crowd with his scoring ability.