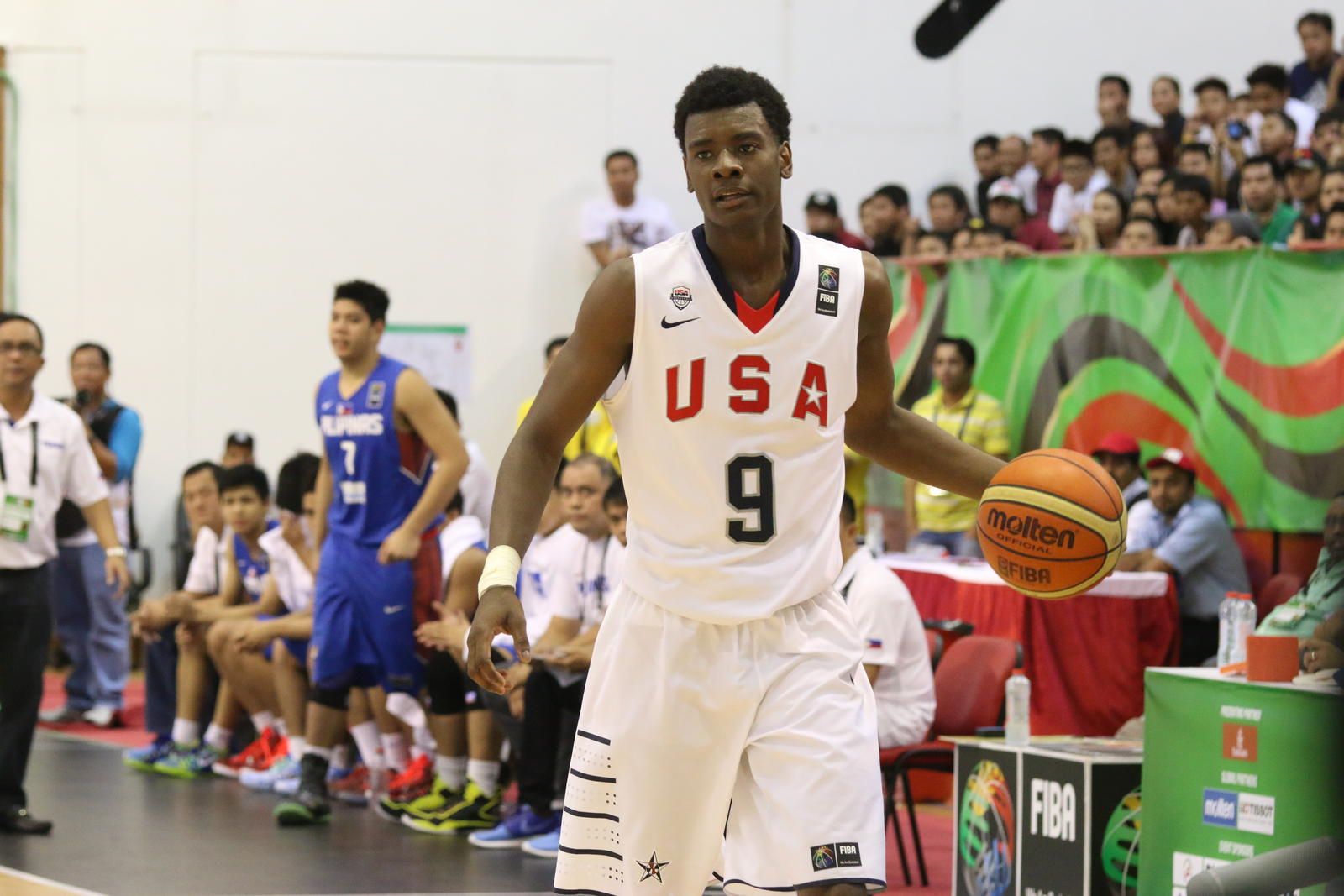 It could be said that Josh Jackson’s journey to Nike Hoop Summit began at the age of five when the current USA Basketball Junior National Select Team forward first recalls dribbling a ball with his parents. The early start can be at least partially attributed to Jackson’s mother, Apple Jones, who was an accomplished player who was considered good enough for professional ranks.

“My mom was a pretty good player and was offered try-outs in the WNBA,” Jackson confirms, “and a lot of other people in my family played — my dad, my uncles and both aunts played.” 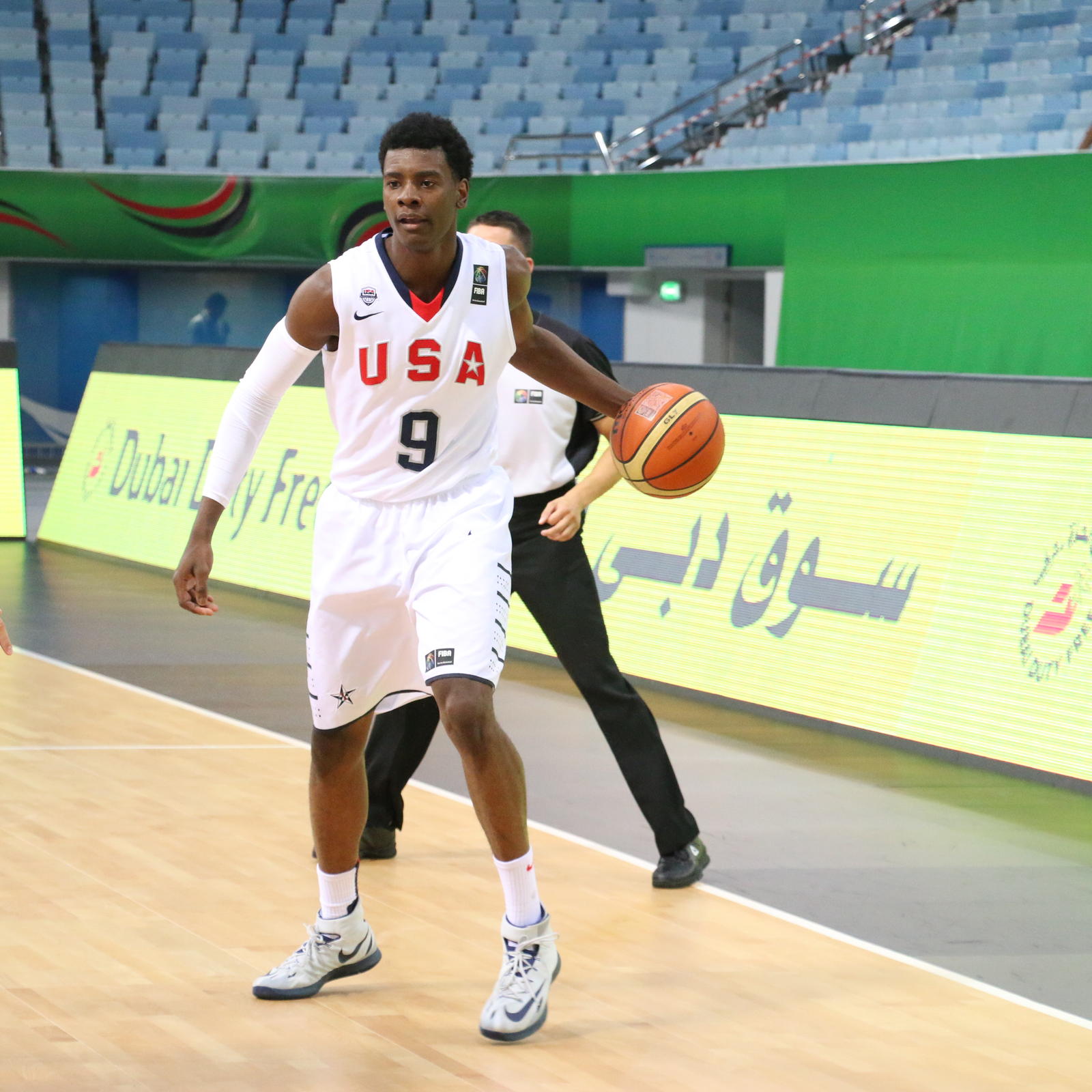 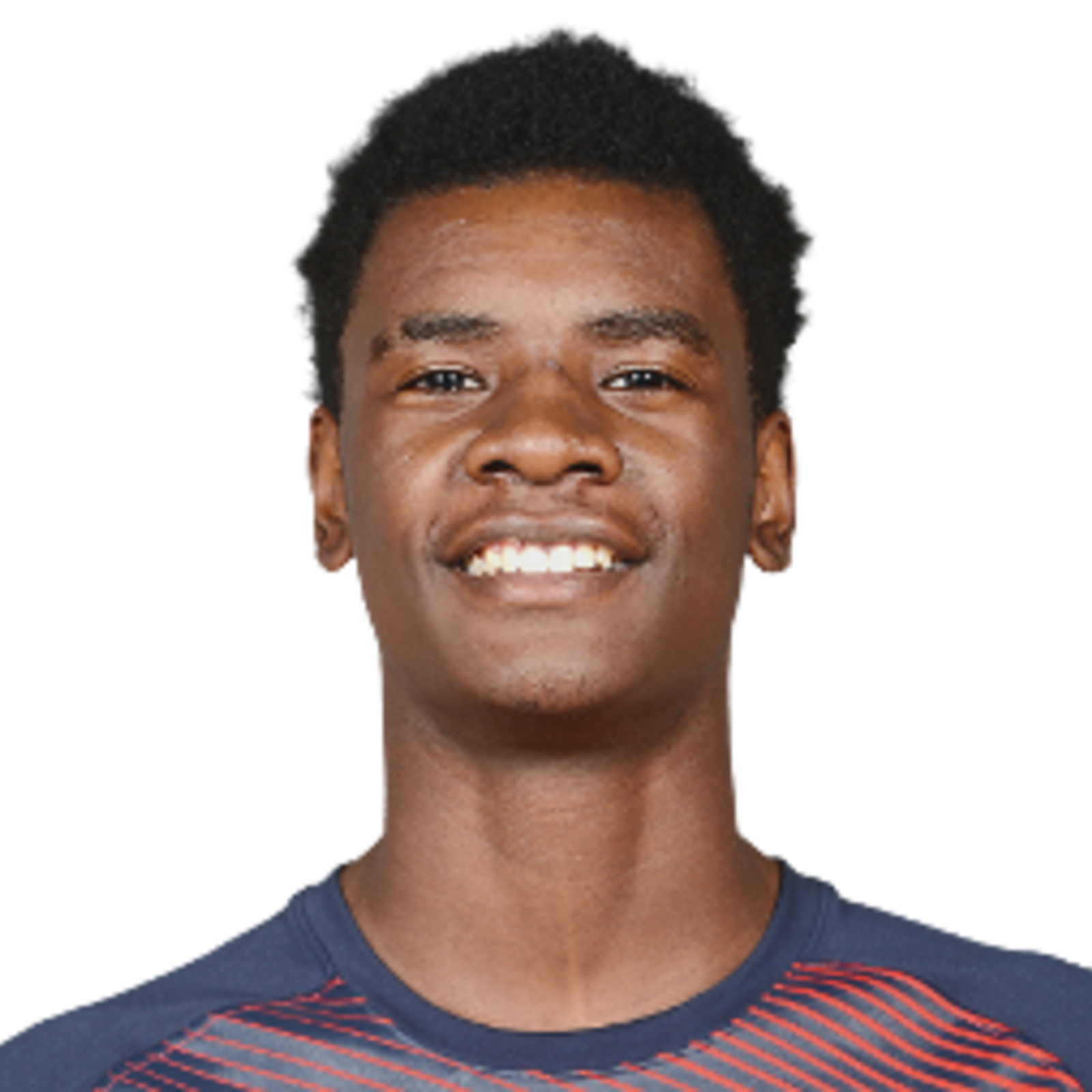 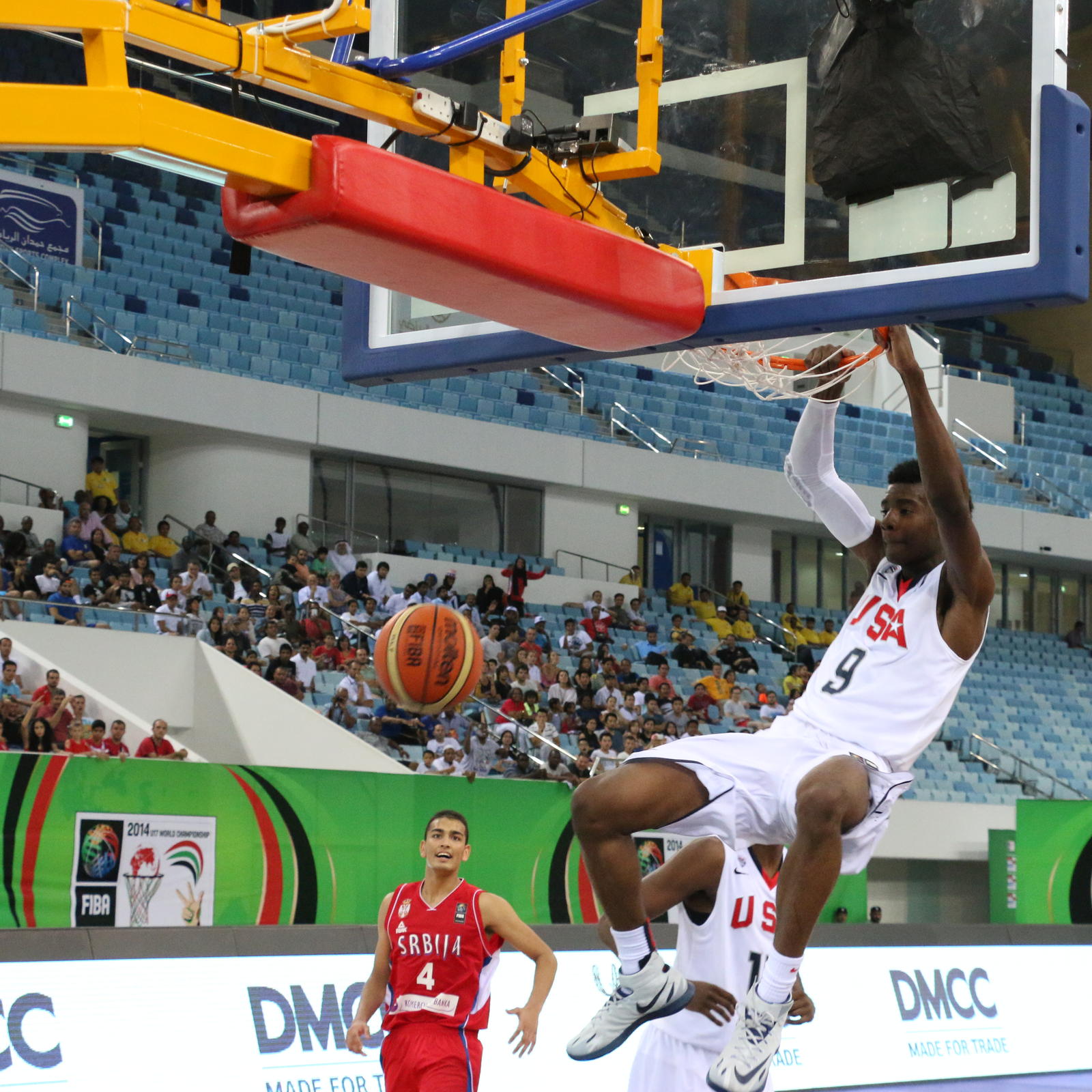 However, despite Jackson’s early introduction to the game and his physical predisposition to the sport — today he stands at 6-foot-7 — his trajectory wasn’t frictionless. As he recalls, “I was always really aggressive but never really had the skills until about the eighth grade. That’s when I started getting a lot better. I think it was just the result of working harder on my game.”

Jackson’s impressive development continued as he began his high school career at Detroit Consortium. “There were a lot of people who helped the team in my freshman year and sophomore year,” he recalls. “My coach my freshman year I looked up to — he was really influential.”

A highlight of those two years came in 2014, when his team took the state championship. “That year was the first time my school ever won a state championship,” recalls Jackson. “Being part of that team, just playing in Detroit… It’s a basketball city, everybody there really likes basketball and our games were packed with fans from everywhere, from all over Detroit — even people not from Detroit came. I enjoy proving people wrong all the time, and we did that when we won the championship.”

The championship win was all the more poignant given that the freshman coach who had influenced Jackson, Coach Al Anderson, had passed away 13 months earlier due to heart failure.

“It was a really tough time,” remembers Jackson. “We had a lot of people in our school who just looked up to the basketball team so much. They kind of depended on us a lot. Basketball was the main sport at our school so we had to win it for our school and for our coach. I still think about Coach Al every day.”

His junior year, following the triumph and carrying with him Coach Al’s influence, Jackson moved to California, where he still attends Justin-Siena High School and plays basketball for Prolific Prep Academy.  Around this same time, Jackson also had his first national team experience, an encounter that once again challenged the young player. Suddenly, he found himself wondering whether he belonged in such esteemed company. 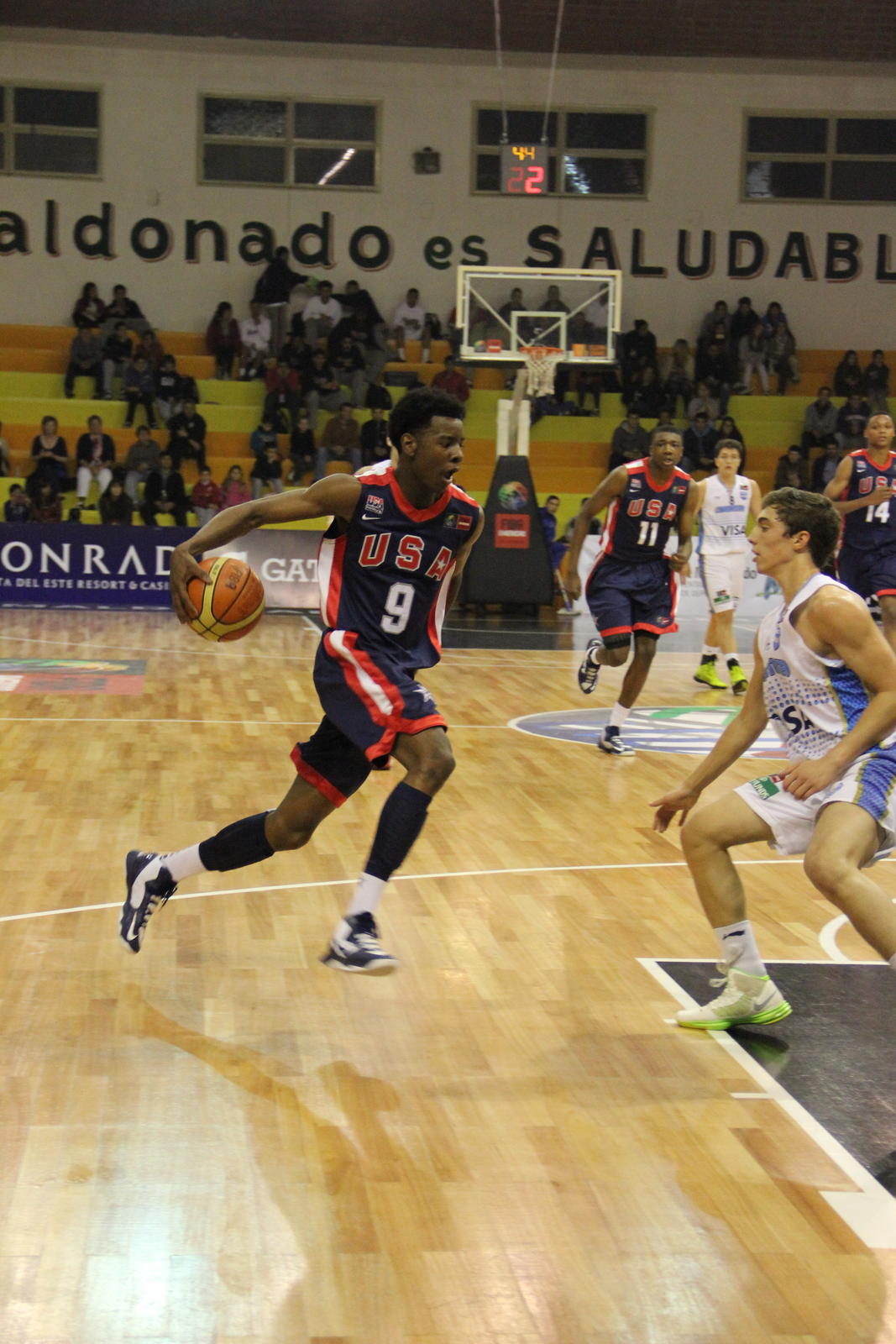 “The first time I played [with the national team] I was 16 years old, for the U16, and I’ll never forget that tryout; it was one of the scariest things ever. I didn’t know what to expect,” Jackson says. “I had never played in that type of setting before, with so many great players around me, so many skilled players on that team. It tested my confidence a lot, but I came through, made the team and we won a gold medal.”

However, the player’s next challenge may prove his most difficult test yet. The Hoop Summit pits the USA Basketball Junior National Select Team, comprised of elite American high school seniors, against the World Select Team. The USA holds a 12-6 advantage over the tournaments previous 18 editions, but the World Team will be chasing its fourth victory in the last five editions of the storied event.

“It’s definitely nice to get the recognition. It’s another way to represent my country,” states Jackson of his selection to the Nike Hoop Summit. “I’m representing everybody in America and that’s a wonderful thing to think about… It’s wild.”

Notably, the globalization of basketball means that by the age of 19 many of the opposing players at Nike Hoop Summit are already familiar with each other. In fact, the 2016 World Team has four players based in North America, including DeAndre Ayton, a 7’0” center from the Bahamas, who is currently playing at Hillcrest Academy in Phoenix, Arizona. “We’ve played each other quite a lot and we’re quite close,” confirms Jackson. “He looks up to me but when we’re standing next to each other, I’m looking up to him!

All of this on-court time leaves Jackson with little free time, but the time he does have is often spent relaxing with family, watching movies and even playing chess. His main preoccupation, however, is where he will attend college next season — a decision he is yet to make, despite great interest from many parties. 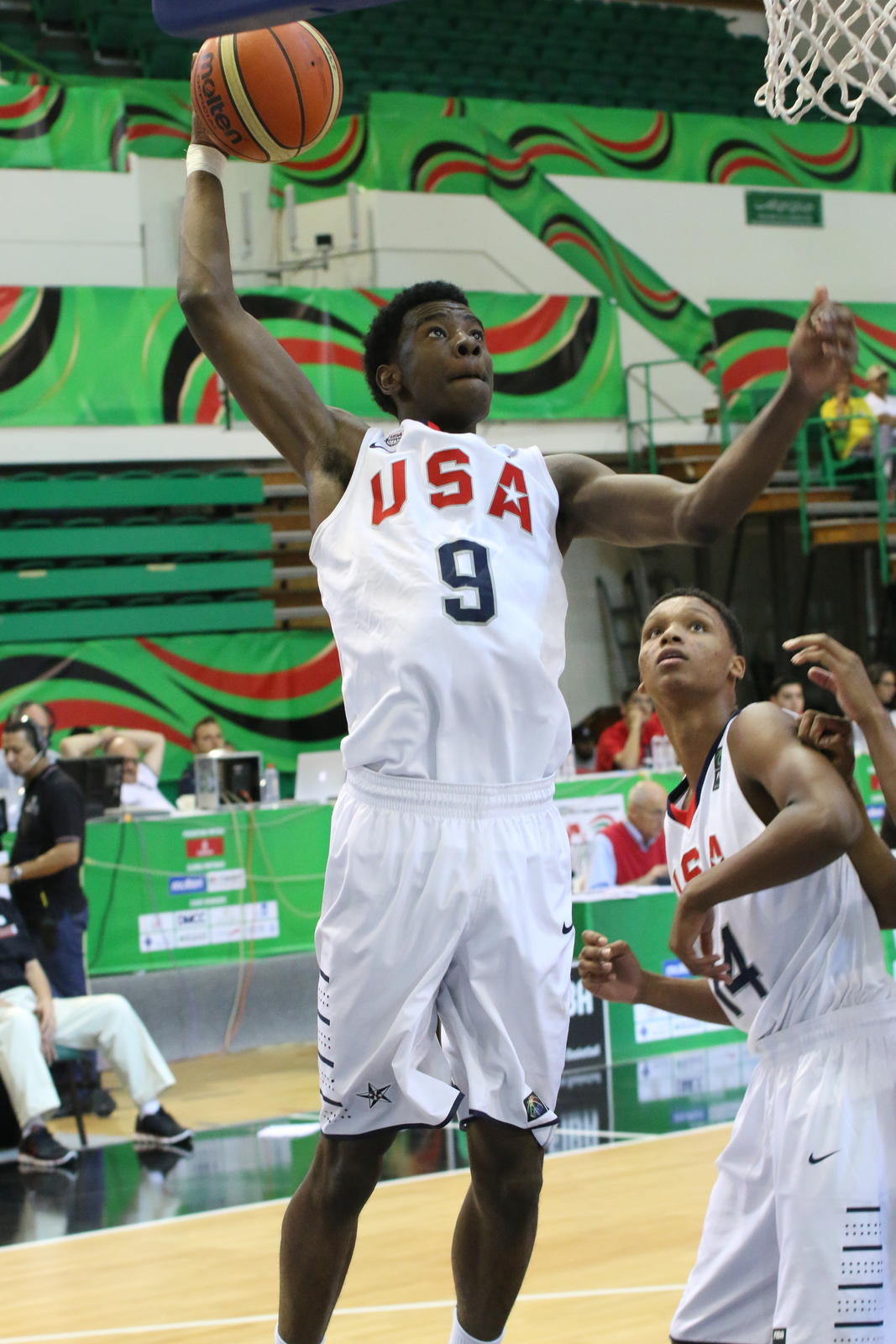 “I try to keep away from it, it kind of wears me down a lot,” says Jackson. “I can’t even count how many times a day someone asks me, ‘Do you know where you’re going? When are you committing?’ It’s every day.”