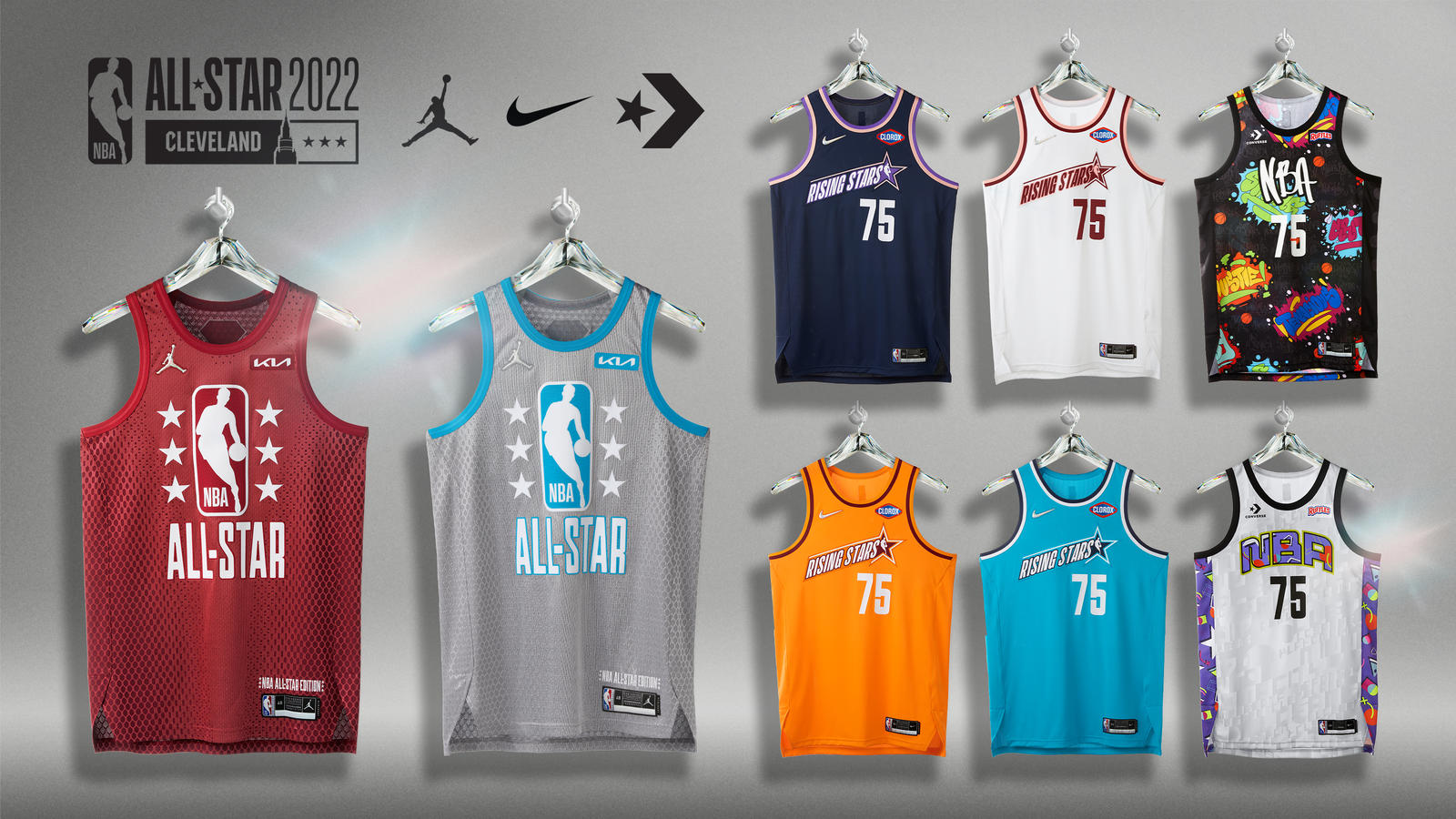 To continue the story around the NBA’s 75th anniversary season, NIKE, Inc. will outfit the marquee matchups during NBA All-Star 2022 with uniforms featuring diamond-inspired color treatments, honoring the league’s anniversary.

• The designs recognize the city of Cleveland as well as the many cultural touchpoints made by the game of basketball.

• In collaboration with young designers from Converse community-partner organizations, the Ruffles NBA All-Star Celebrity Game uniforms show how access to opportunity, including through sport, can empower the creative process.

NIKE, Inc. will deliver the uniforms for NBA All-Star 2022, from the All-Star Game and Clorox Rising Stars to the Ruffles NBA All-Star Celebrity Game. Basketball drives creativity across NIKE, Inc., and all three brands — Jordan Brand, Nike and Converse — connect to a different piece of basketball culture and the sport’s modern influence.

For the fifth consecutive year, Jordan Brand will outfit the league’s stars during the 2022 NBA All-Star Game. Deeply connected to grassroots basketball communities, Jordan Brand designed uniforms that connect the characteristics of the city of Cleveland to cultures all over the world. The uniform’s typography is inspired by the architecture of the city’s bridges and gives homage to classic All-Star uniforms of the late ’80s and early ’90s. The colors are drawn from the silver, prismatic shine of a diamond against the blue and red of the NBA logo in celebration of the league’s 75th anniversary season. The blue also speaks to the prominence of Lake Erie, and the red is a variation on the fiery strength and resilience of Cleveland.

Designed by Nike, the Clorox Rising Stars uniforms follow a similar city-inspired direction. They feature unique colors inspired by the refraction of a diamond now showcased in four colorways to reflect the event’s updated four-team format.

The Converse uniforms for the Ruffles NBA All-Star Celebrity Game are rooted in the brand’s effort to offer greater access to young creatives. Created by designers — some as young as 13 — from Converse’s local Boston- and Los Angeles–based Social and Community Impact partners, the uniforms are inspired by stylistic cultural differences between the East and the West. The East uniforms nod to the resilience of the cities in the region and local street art. The West uniforms incorporate ’90s pop culture, including popular movies, television and music during that time.

The knit material is new to the NIKE, Inc. NBA All-Star uniforms. New yarn combinations use proven moisture-management yarns, along with a new Trilobal “Iridescent Shine” yarn that creates a color-shift effect depending on how light hits the uniform. Dri-FIT ADV zoned-performance engineered material allows greater breathability for the athlete in high-sweat areas.

The Jordan Brand uniforms for NBA All-Star 2022 are available for purchase on Nike.com, NBAStore.com and select retailers on January 27. 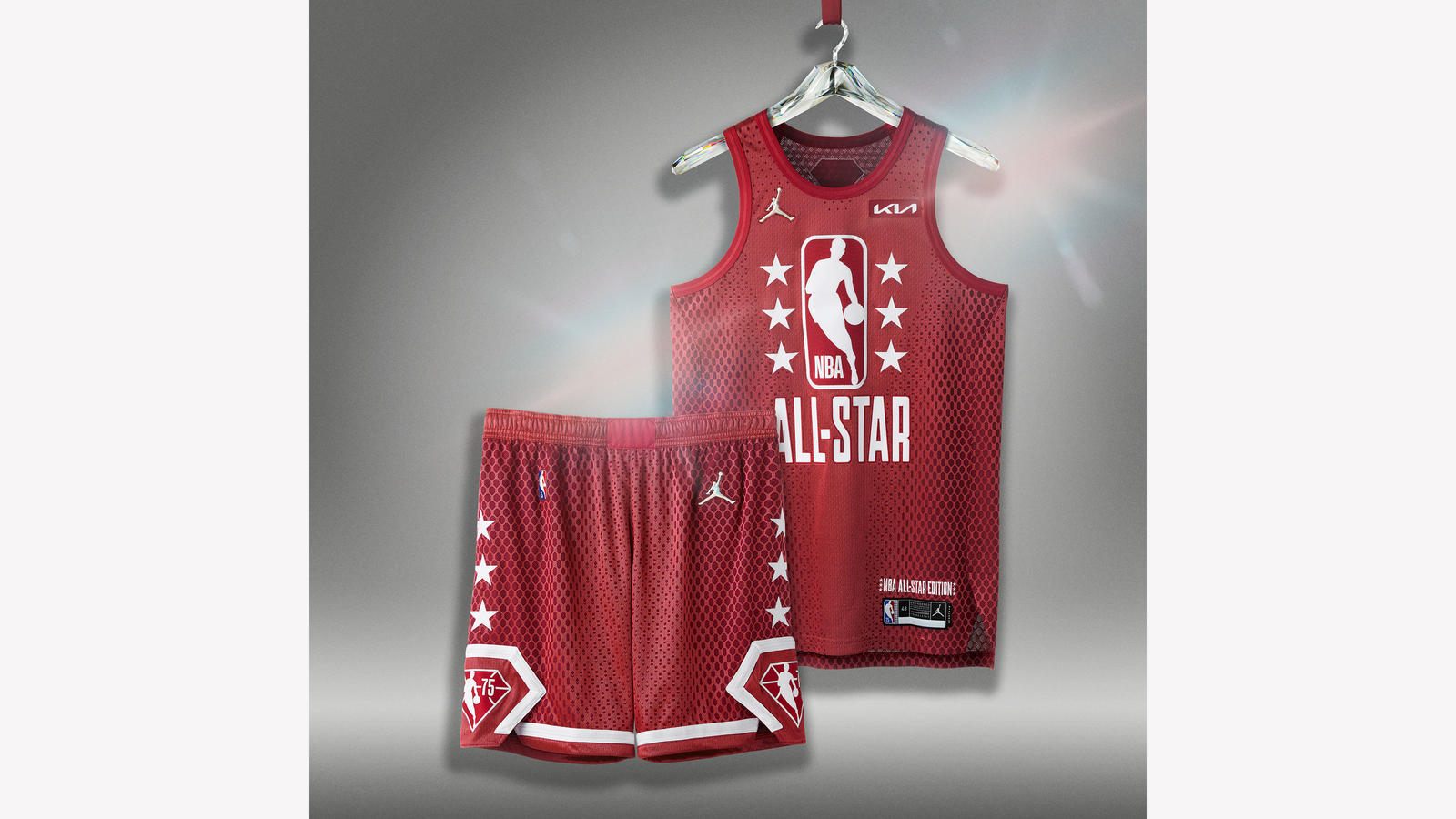 The main color inspiration for the uniforms stems from the reflective and silver shine of a diamond intertwined with the blue and red of the NBA logo through a prismatic lens. 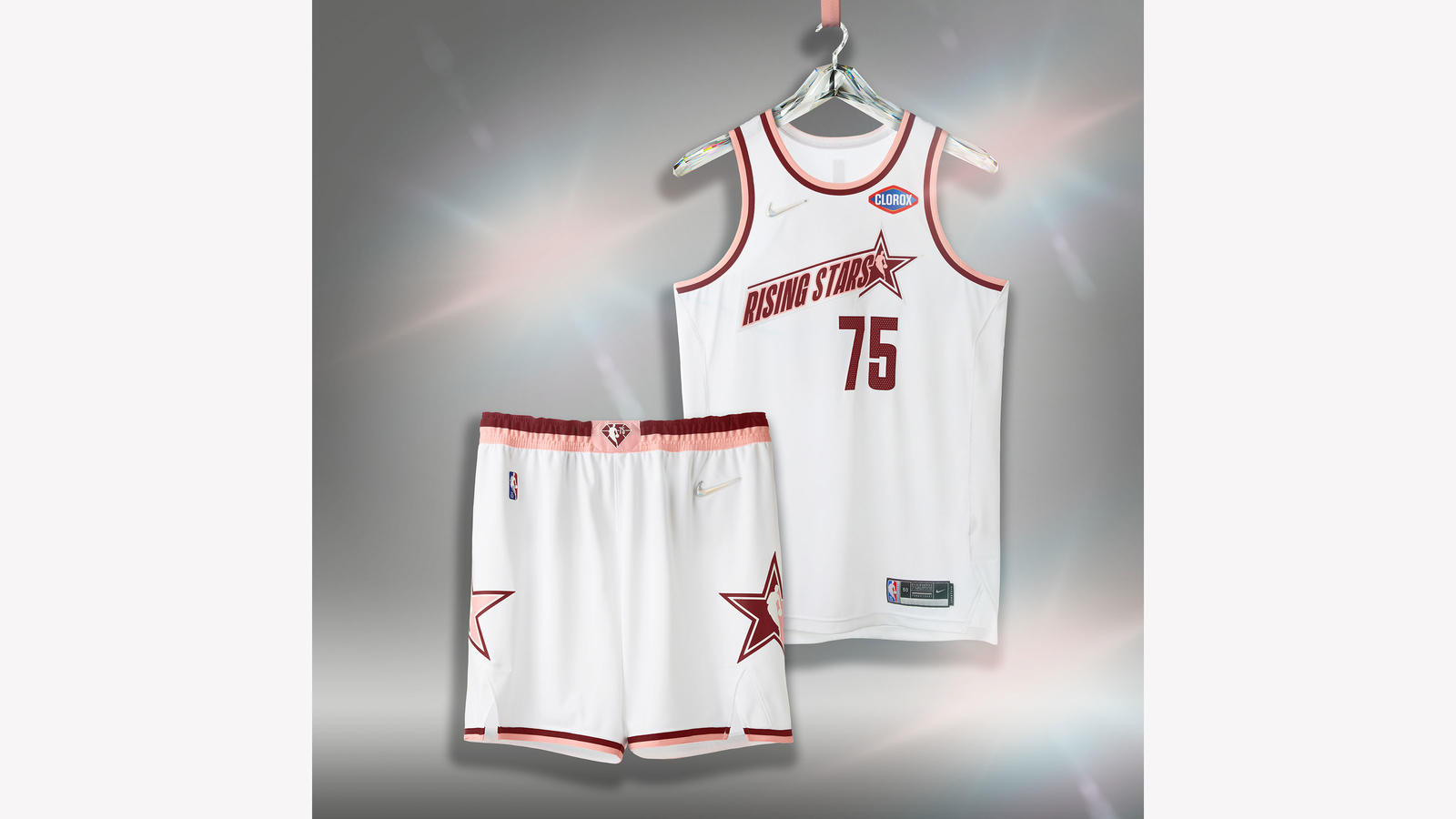 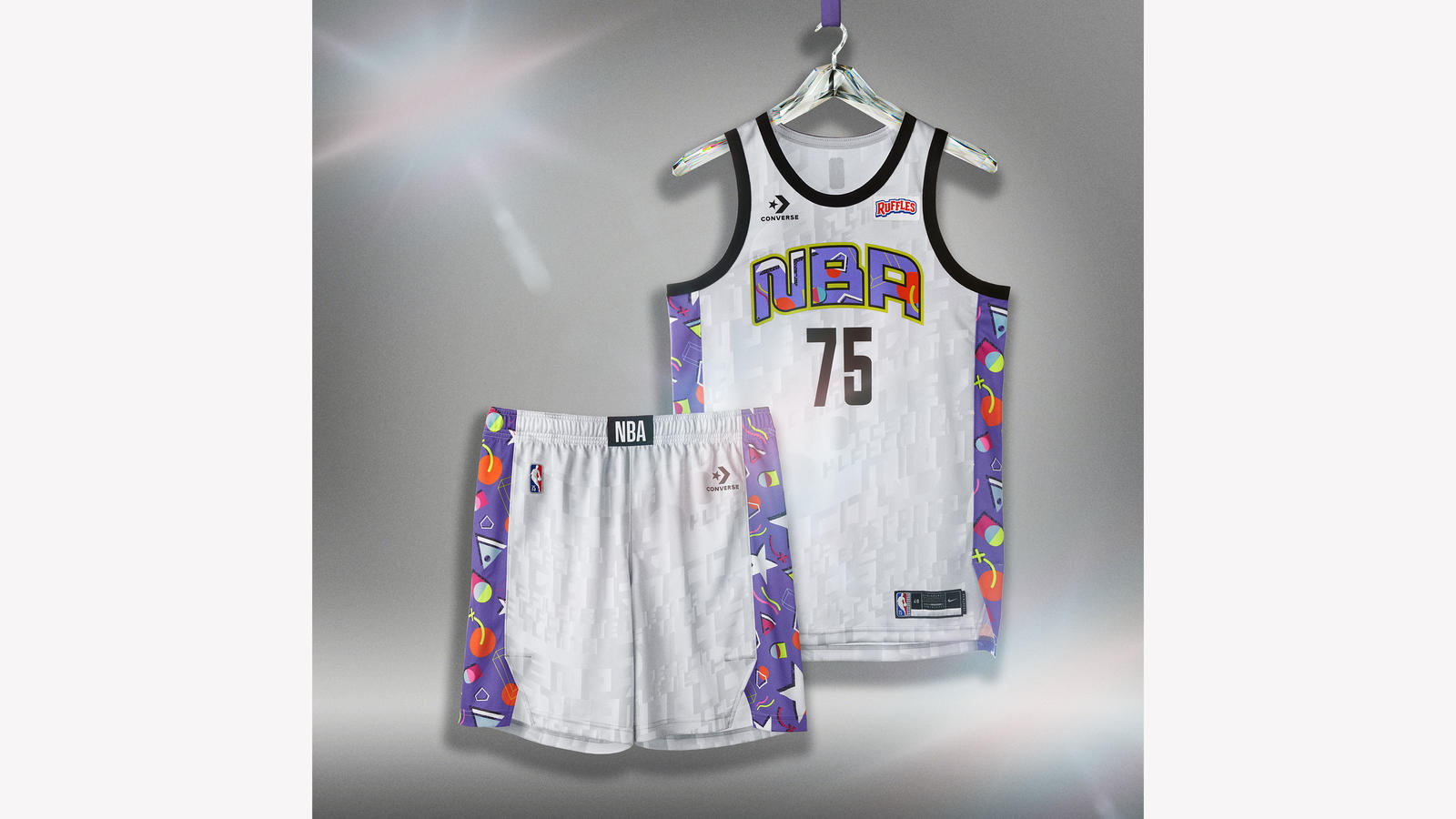 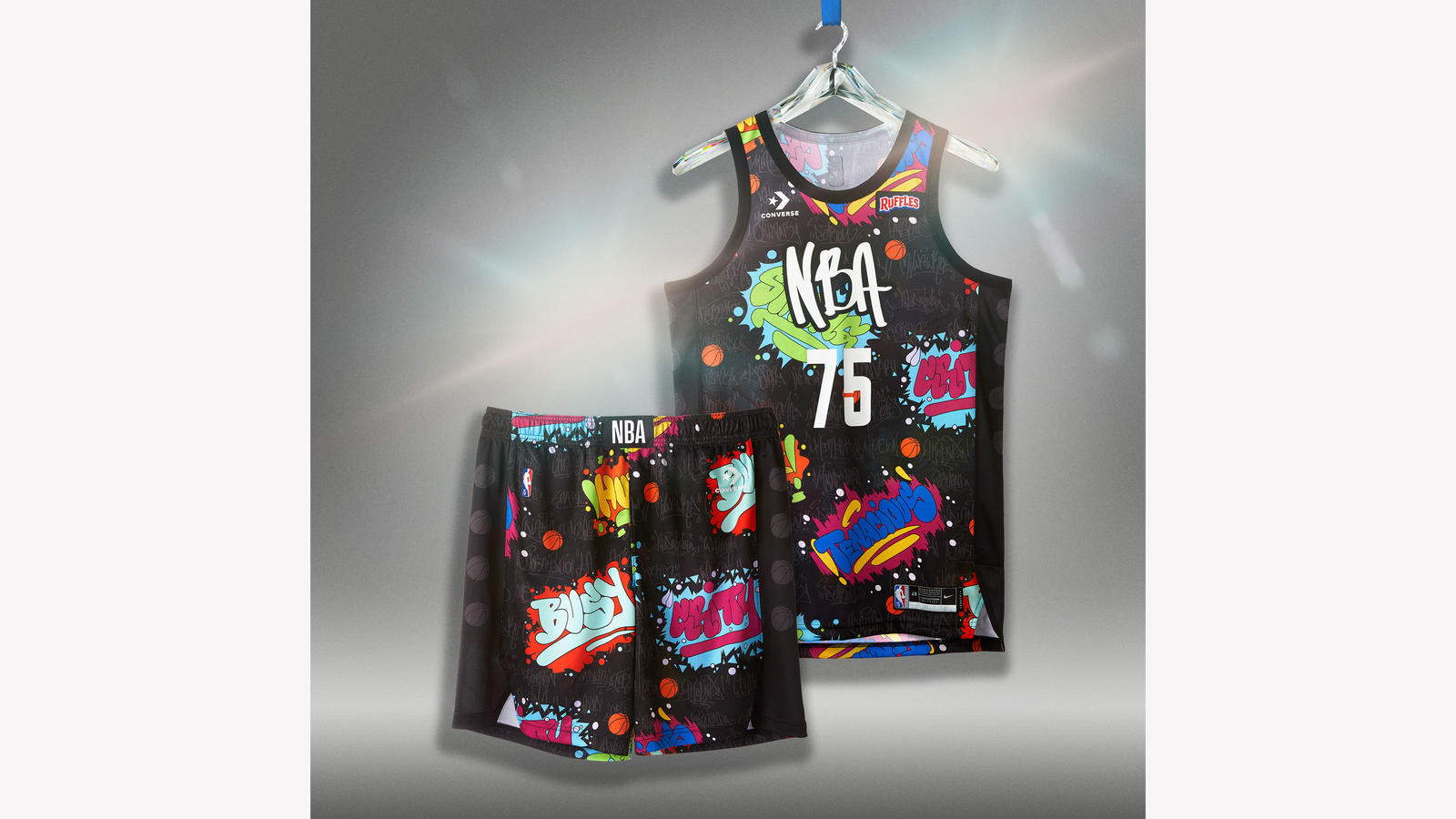 Eighteen-year-old Abel Teclemariam designed the Converse East Ruffles Celebrity Game uniform and is a member of Boston-Based The Possible Zone, which advances economic equity by ensuring young people develop the entrepreneurial spirit, skills and networks to launch successful careers. The uniform is black and adorned with words that describe the thriving East Coast in a street-art design over the names of the region’s cities tagged in light grey.