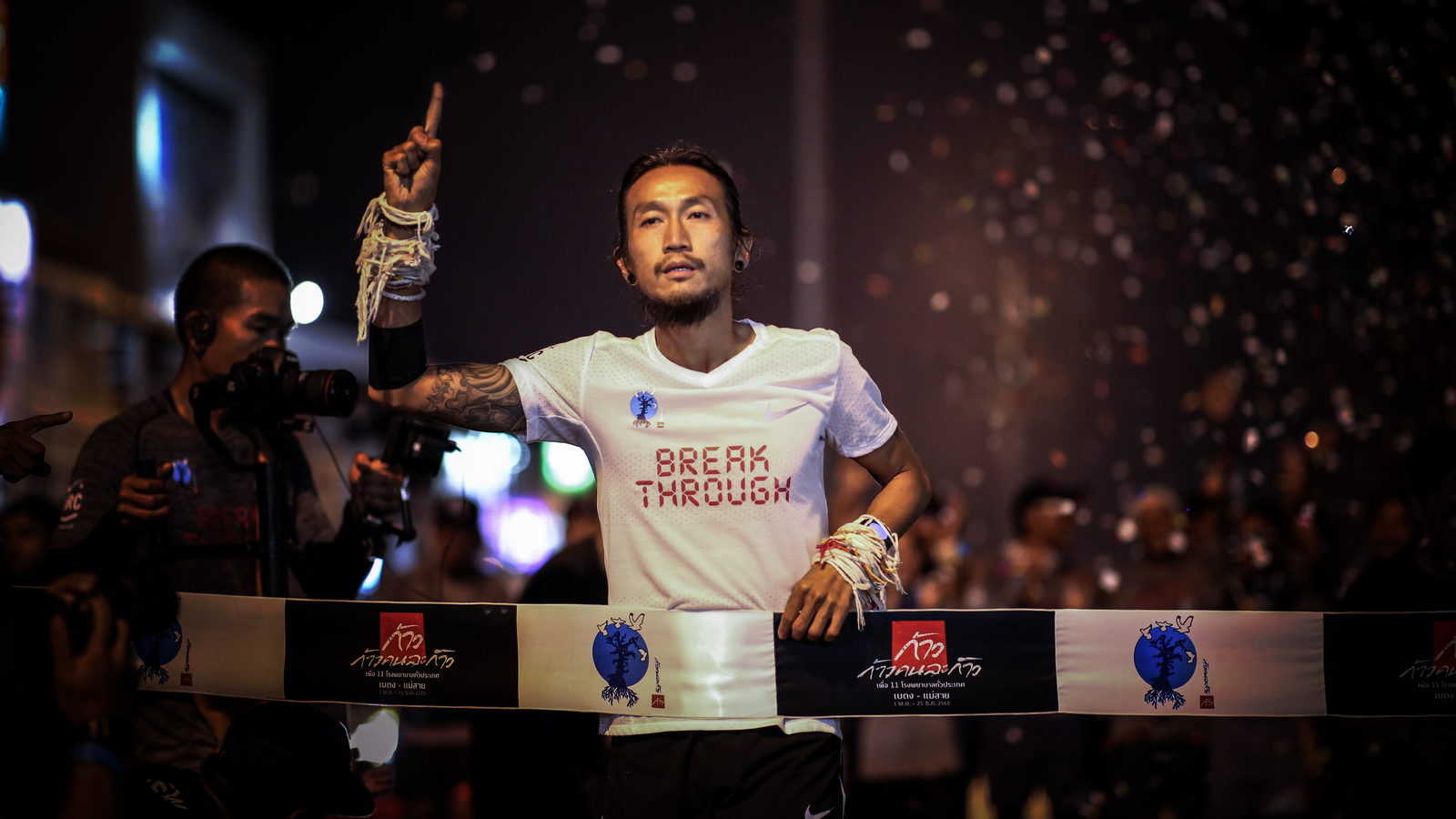 On November 1, Artiwara “Toon” Kongmalai, the frontman of successful Thai rock band Bodyslam, set out for a very long run — a 55-day, 2,191-kilometer (roughly 1,361 miles) jaunt from Thailand’s Betong district in the southern Yala province to the Mae Sai district in the north Chiang Rai province — to be exact.

Since that day, he’s been running up to five times a day, spending between 12 and 18 hours on the road. He’d typically run four days in a row, then take one rest day to let his body recover before heading back out there for another round of pavement pounding. Today, December 25, he crossed the finish line in Dan Tha Khee Lhek, in Mae Sai district, Chiang Rai province, hitting his 2191-kilometer goal. A select number of Nike members were invited to run with Toon as he crossed the line, while 118 Nike members had the chance to run the last 10 kilometers of the run out of Bangkok at Siam Square 1 with the local Nike Run Club to symbolically finish strong with and celebrate Toon’s accomplishments.

Toon wasn’t running for himself. He was running to inspire the citizens of Thailand to raise more than the equivalent of 20 million USD for 11 local hospitals. But he didn’t meet his goal. He far exceeded it by bringing in approximately 1.1 billion THB (about 33 million USD).

Much of that is thanks to generous supporters who donated to the cause. On top of that, Toon auctioned off four pairs of Nike Zoom VaporFly 4% shoes he wore throughout the 55-day journey. He gave each shoe a name and a specific memory from his long run. (The first pair was called Southernmost, as that’s where he started, which represented the beginning of his audacious goal. Bidding for Southernmost brought in 1,450,000 TBH (about 44,340 dollars USD).) Total bidding for the four shoes amounted to 4,401,566 THB (134,606 USD).

“After 55 days on the road, I feel light-hearted and energized knowing and seeing how everyone has moved with this cause,” he says. “I set out with two goals at heart – to seal the importance of a healthy, active lifestyle among us as we move, as we run… And my heart soars when I see us as one nation, helping one another where any amount, just a small contribution from the sincerity of one’s heart can make a difference.”

HOW IT ALL BEGAN

Perhaps even more astonishing than his race course map and ambitious fundraising goal is the fact that Toon isn’t widely known as a runner. As the frontman of successful Thai rock band Bodyslam, Toon is first recognized as one of Thailand’s biggest rock stars. But his love for running is uncompromising, and that’s why he has made a commitment to end the year with this extraordinary mission.

To assist him in achieving his goal by helping maximize his performance and minimize his risk of injury during his journey, Nike invited Toon to its World Headquarters in Beaverton, Oregon. To discover and enhance what best aided him as a runner, experts, including the team behind Breaking2 from the Nike Sports Research Lab (NSRL) and apparel and footwear specialists, conducted analyses on Toon to gain insights into his pace, heart rate, fluid and calorie requirements and recovery modalities, as well as what shoes and apparel could best support him throughout his runs. 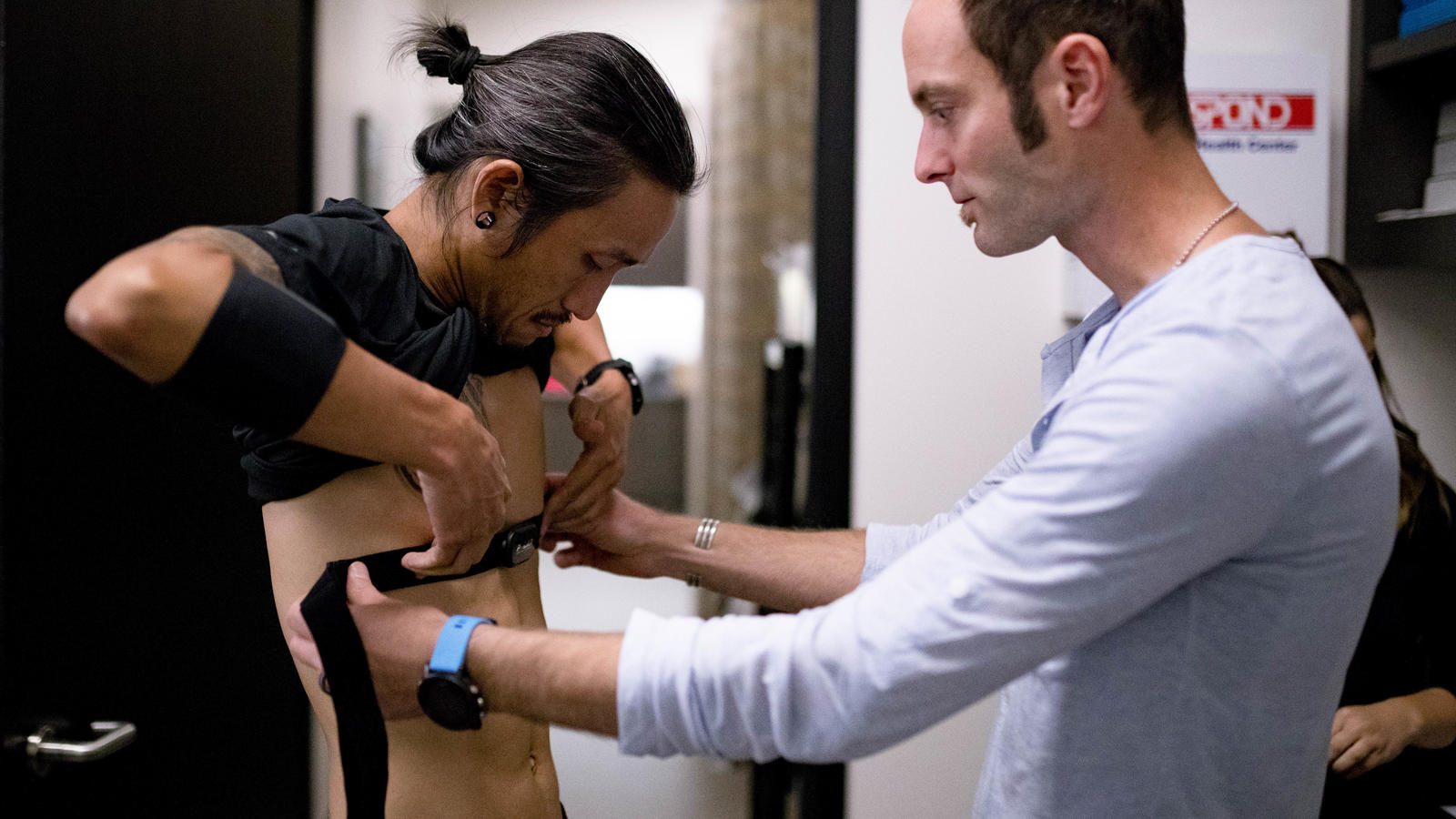 They gathered information on Toon's endurance, hydration, nutrition and recovery. 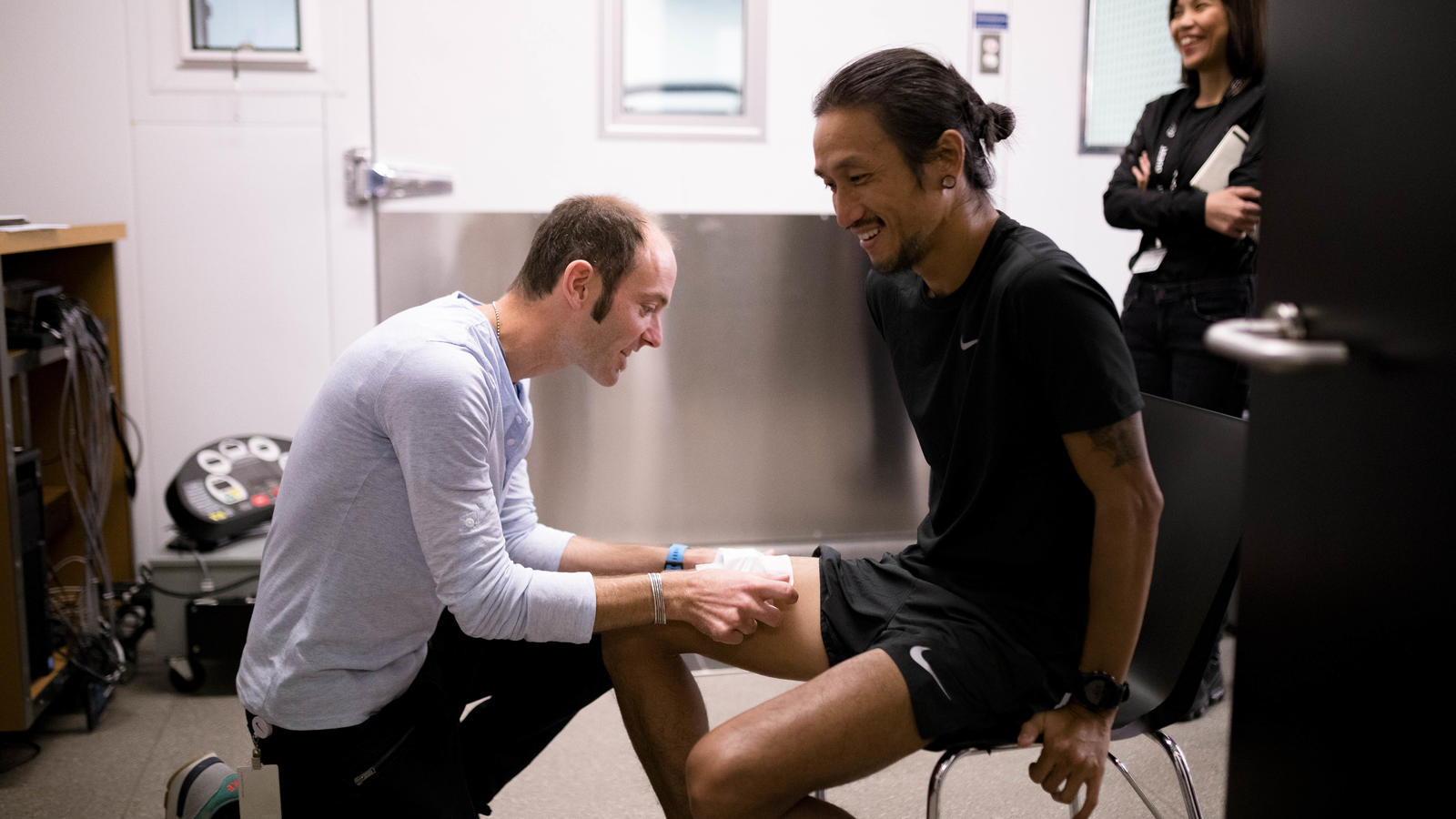 Nike NSRL scientists learned as much as they could about Toon to help him plan for his epic journey. 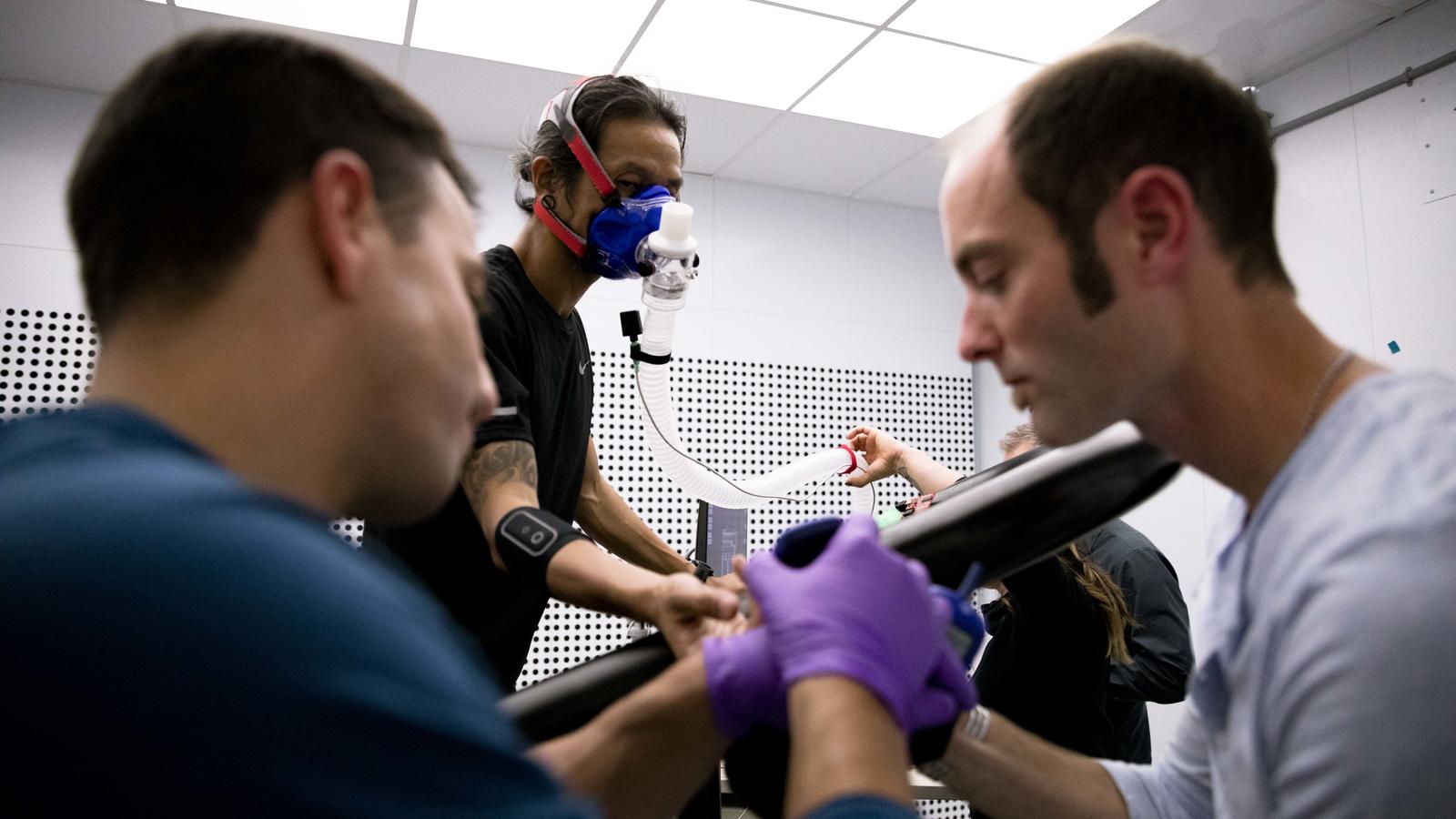 Toon will cover a US-distance equivalent to that of running from Bellingham, Washington to San Diego, California.

Here's what they learned: 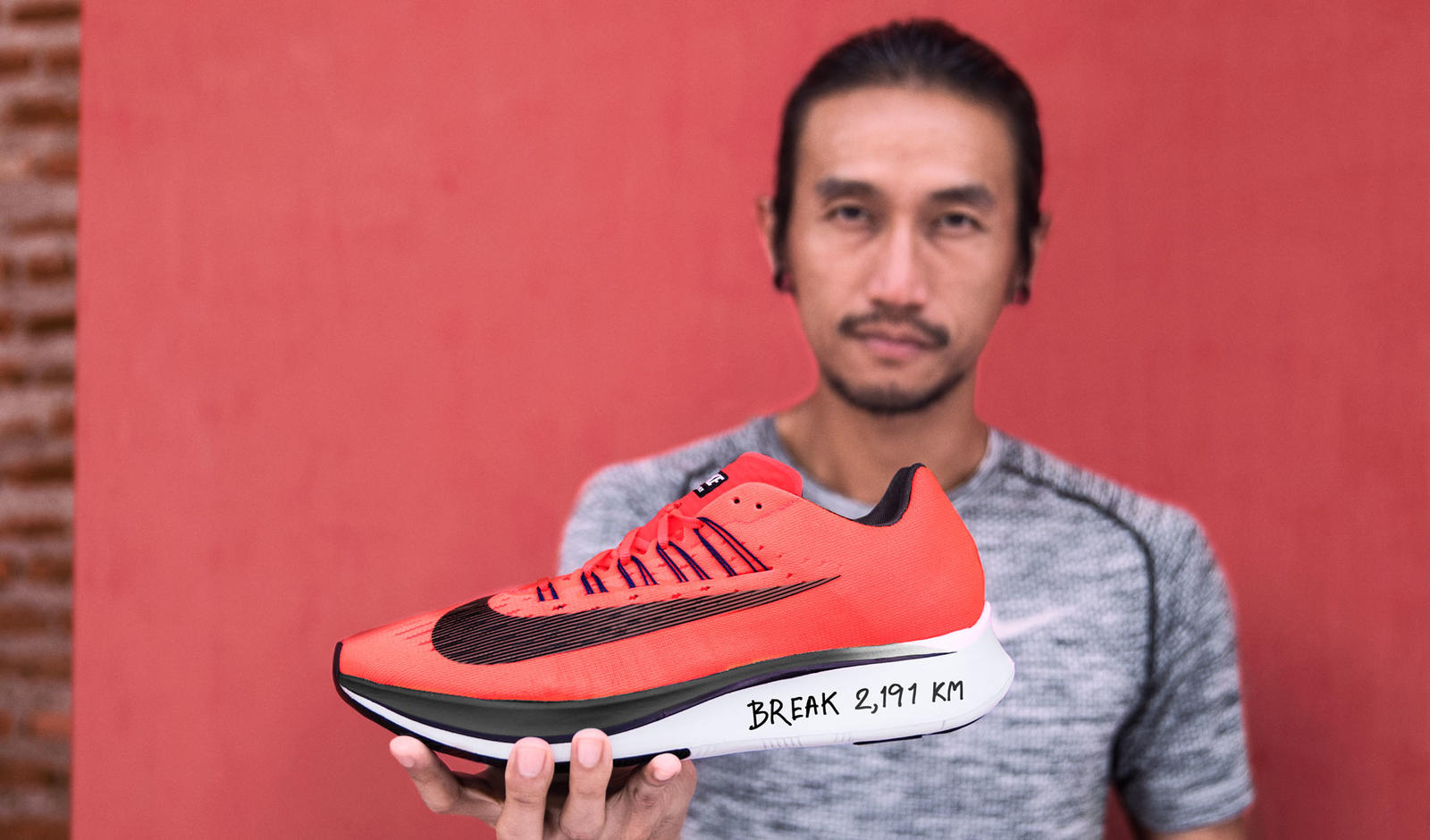 Toon holds one of his shoes, a Nike Zoom Fly, with his goal to break 2,191 KM written on the midsole.

“Nike’s commitment to enabling me inspires me to push my limits even further,” says Toon.

And before Toon left, the group surprised him with a pair of Nike Air Max 1 (Toon says he’s a huge fan of this silhouette), signed by Tinker Hatfield.

“We are thrilled to be supporting Toon with his mission to show the nation just what running can do — both for a person and for a community,” says Pannee (Mee) Santiwiwatkul, Nike Thailand Marketing Manager. “Through his inspiring action, he demonstrates how sport can truly be a force for change in the world.”