“Teaching kids tips — how to shoot, how to dribble — to be honest, that is my favorite part of the game,” says Cristiano Ronaldo onstage at Beijing’s Guomo Nike store, where minutes later he was joined by the Brilliant 7, the MVP’s of the local Nike League.

That passion was evident the previous night, July 23, when the four-time Ballon D’or winner guided young players through a series of passing and shooting drills. The evening was part of the Nike League finals, the culmination of a season’s play between 216 teams across elementary, junior and senior high school levels. The evening ended with the superstar handing out trophies to the victors in front of the 6,000 fans who came to watch the fun — not bad for a program that only launched in the second weekend of April.

Teaching kids tips — how to shoot, how to dribble — to be honest, that is my favorite part of the game.

The Nike League was founded to increase participation in youth football across Beijing, and is a response to a China-wide desire to increase opportunity for youth in sport. The teams, each formed by a respective school football committee, represent all 16 districts of the city and accounts for nearly 3,000 players. Players from Beijing Guoan of the Chinese Super League (CSL) lend support in training, while scouts from the league often attend matches. The program welcomes players of all ages and skills, and its fluidity gives chance for growth both in individual technique and within the national ranks of Chinese football — two members of the league are currently enrolled in the Chinese Football Associations U14 national rep system.

“Here you can feel the real fans. I appreciate the love the fans give to me and it gives me motivation to work hard for the future and to maintain my level,” Ronaldo said during his address to players and fans. “To be here, to be an example to young players means a lot." It’s a testament not just to his support and passion for grassroots football, but of the strength of support during the player’s tour of China. 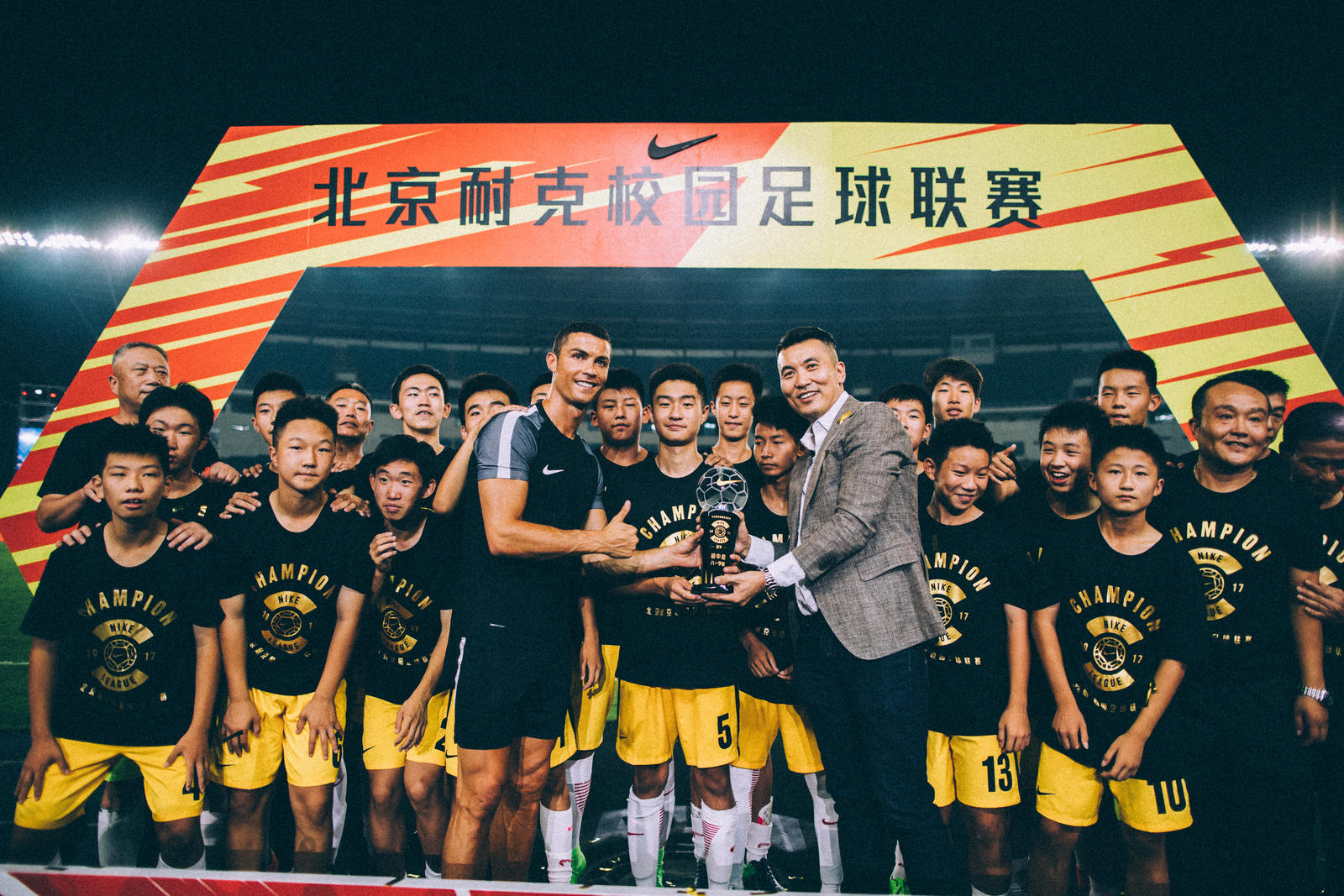 Beyond Beijing, Ronaldo’s unyielding work ethic connects to efforts made around China to bring football to school programing. The athlete was on hand to honor Lv Shao Wu, who brought football to students in the rural, mountainous area of Long Xi County in the southeast of Gan Su Province, as well as to inspire young players during a store appearance in Shanghai.

Ronaldo’s influence extends beyond grassroots level too. Take, for example, fellow number 7, Wu Lei (25). The all-time leading scorer at Shanghai SPIG, managed by Portuguese legend André Villas-Boas, Wu made his first professional appearance at age 14 and 287 days. This distinguishes him as the youngest pro player in CSL history, as well as positions his tenure among the nation’s new generation of footballers.

With Ronaldo in the crowd on July 22, Wu added to his scoring tally with a brace against league rival Guangzhou Evergrande. While the league’s global stature has grown due to increasing transfer of international stars, Wu’s homegrown talents are proof of potential in the national game.

With grassroots efforts ranging from informal schoolyard kick abouts to the more structured Nike League, the process of discovering the next Wu Lei is in place. And as more local talent stands shoulder-to-shoulder with the world’s best, the prospects for Chinese football (and hopes for next summer) escalate.