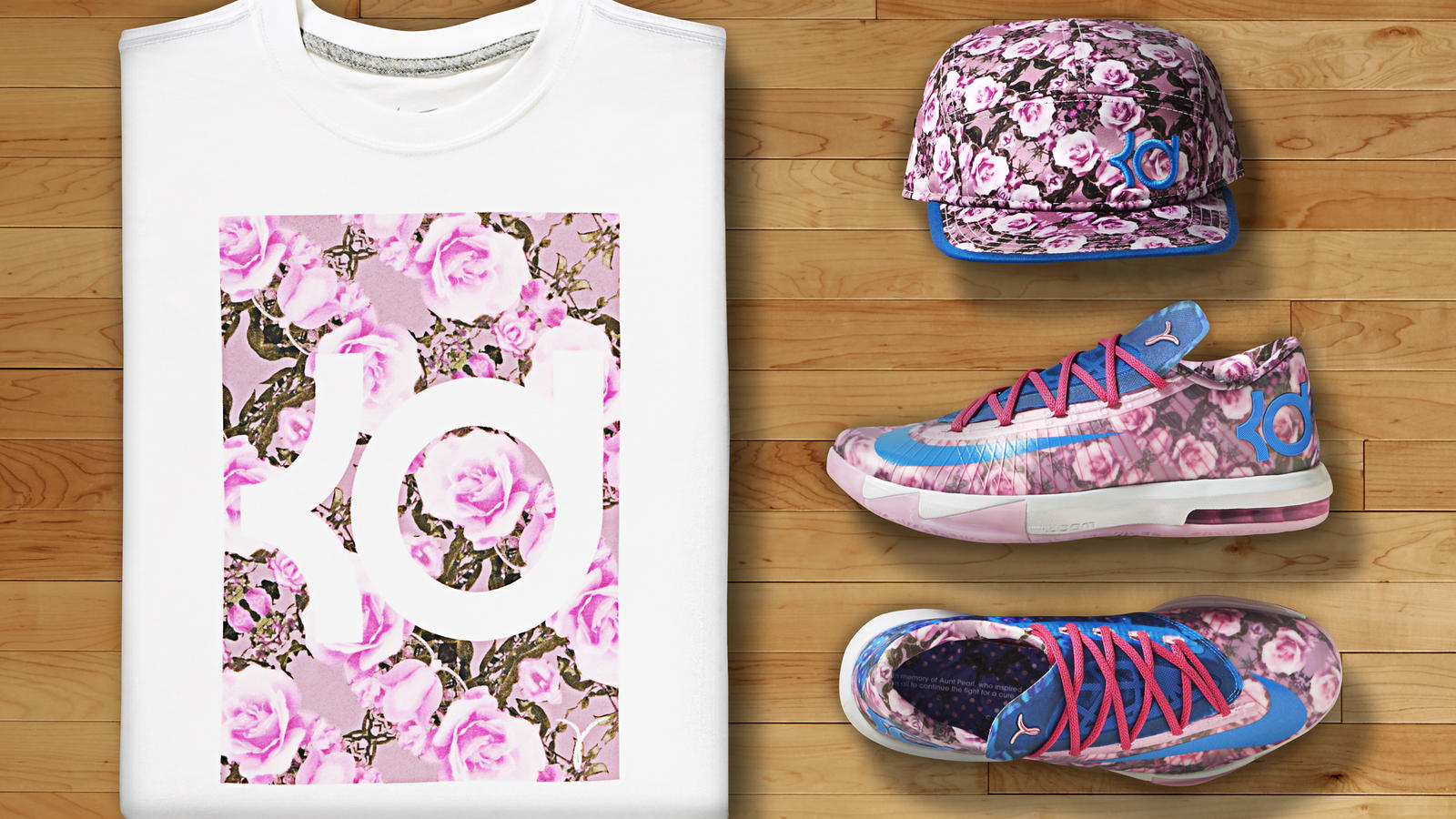 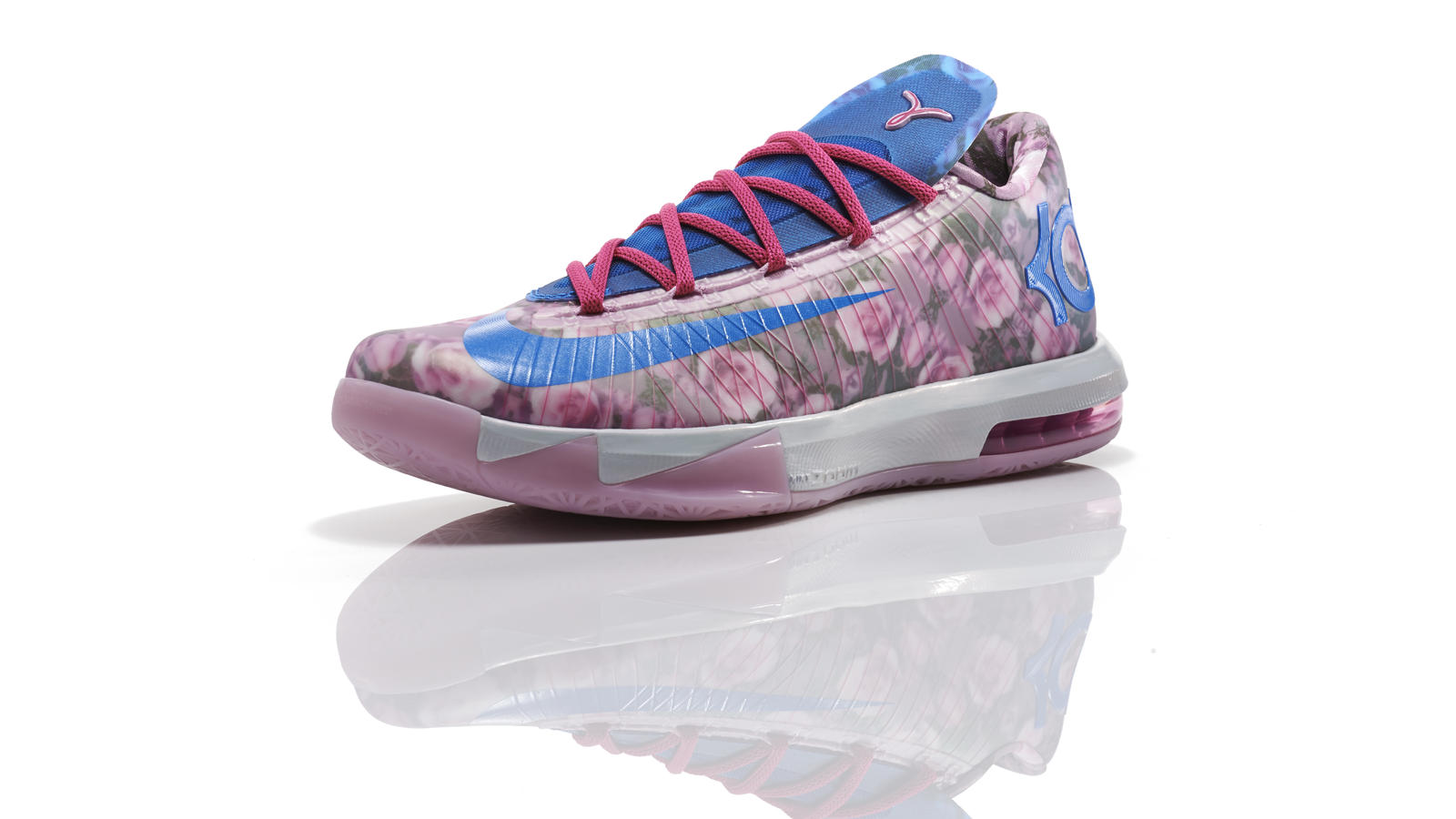 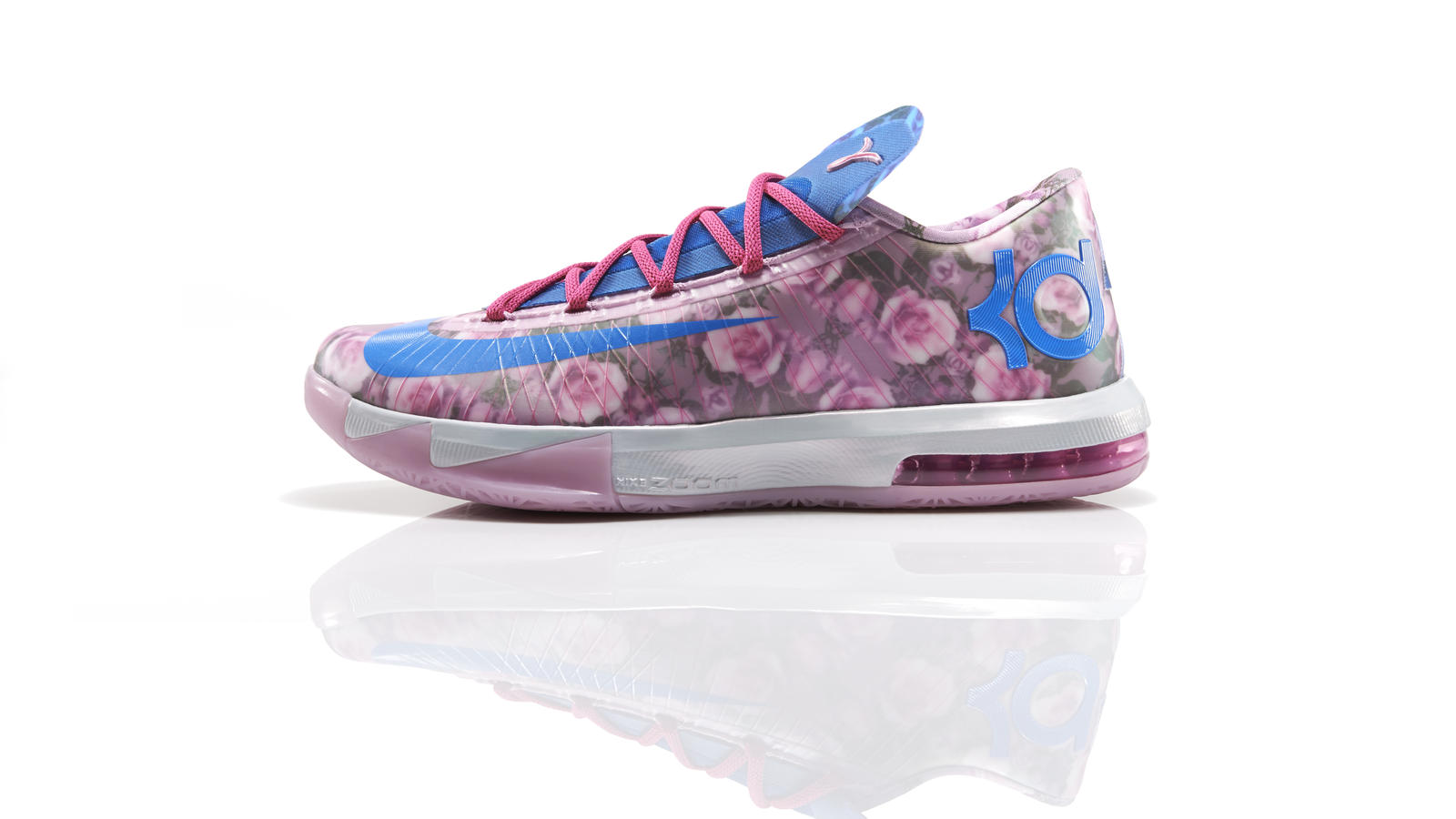 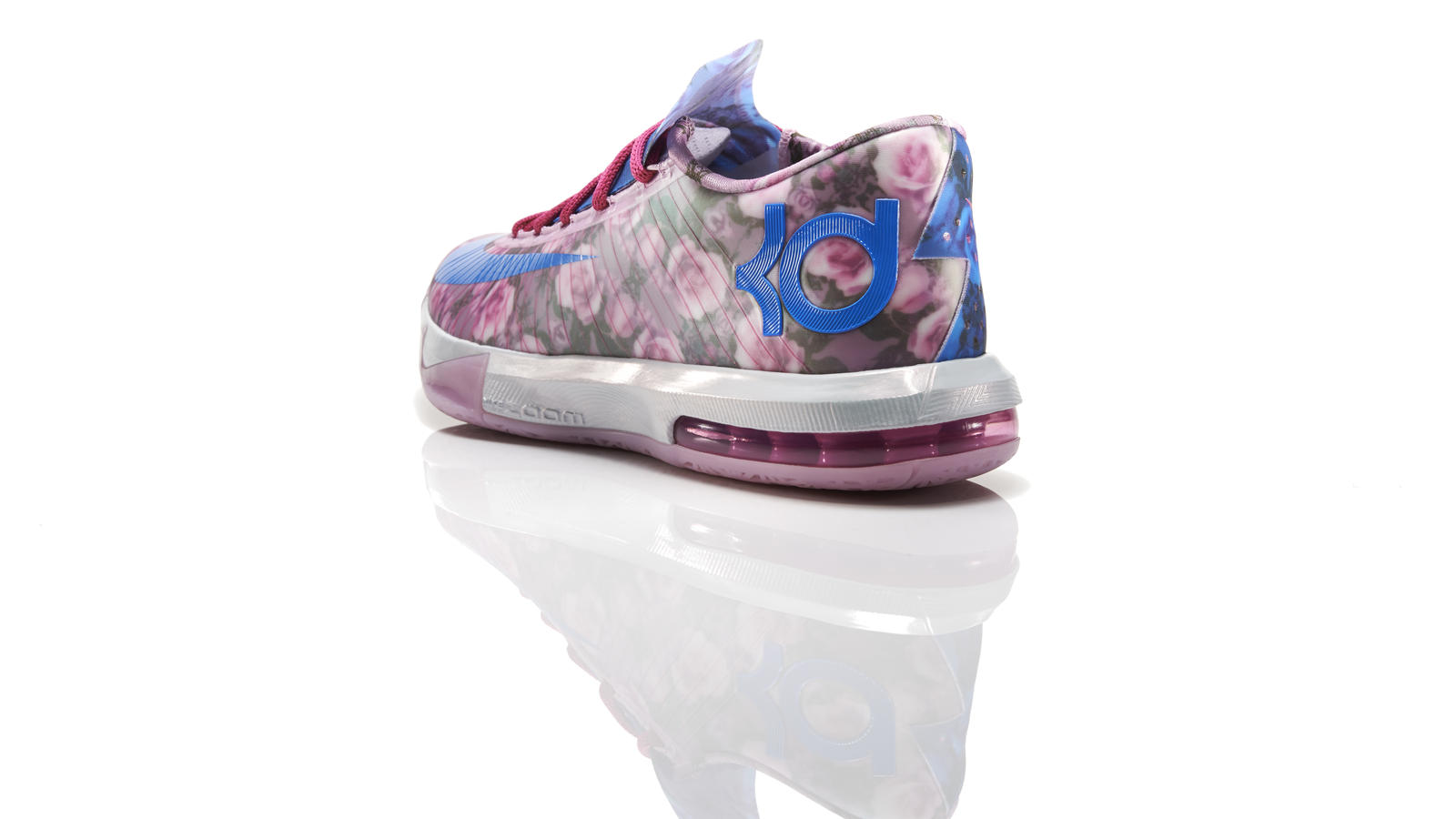 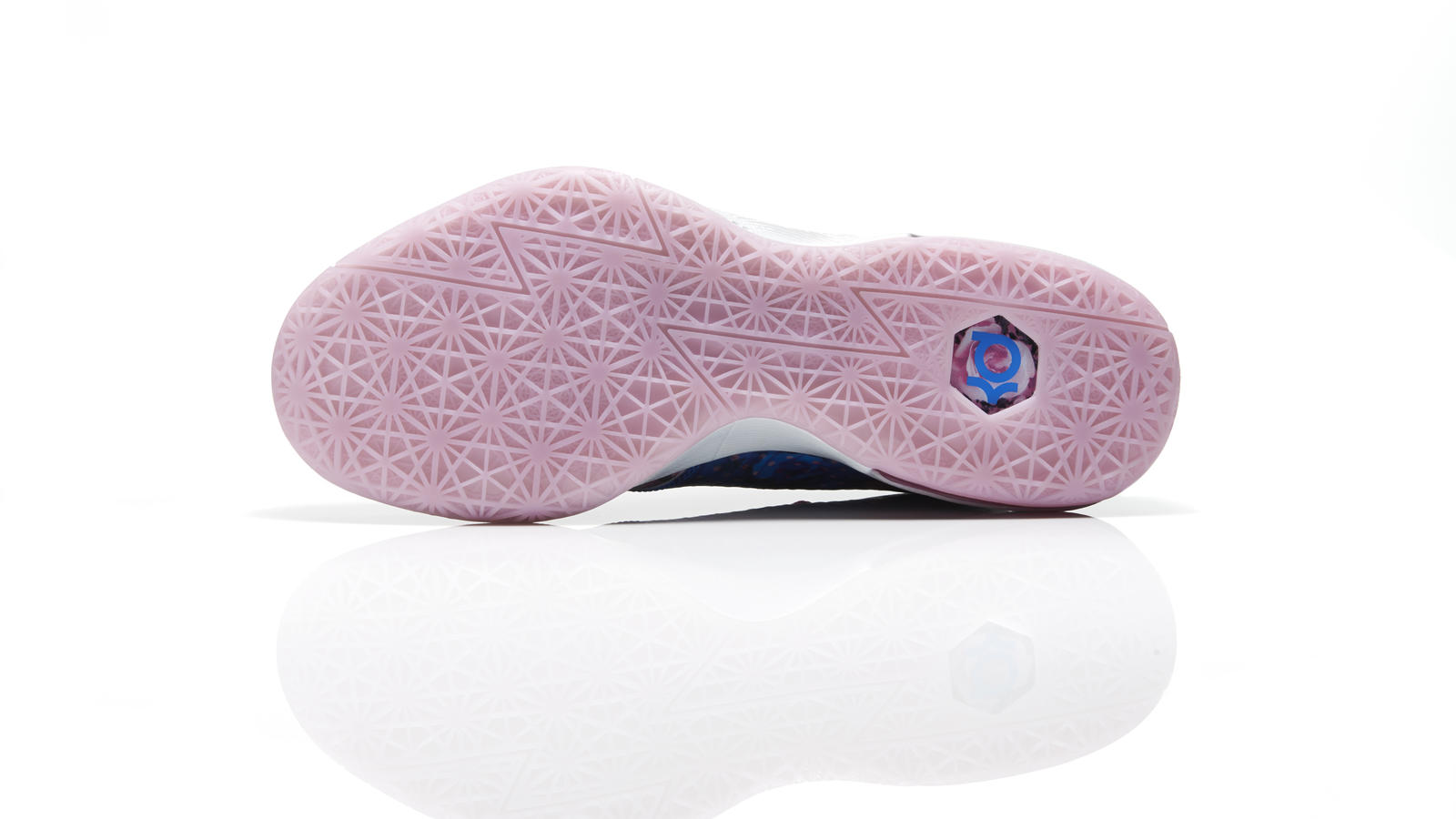 Kevin Durant was inseparable with his late Aunt Pearl who passed away from lung cancer in 2000.  His bond with her began at a young age and he loved spending time with his aunt watching movies, joking and laughing at his grandma’s house in Capitol Heights, Maryland, just outside of Washington, D.C.

Aunt Pearl had a unique ability to reach the sometimes shy Durant as a kid.  Her memory lives on as KD keeps her spirit alive.

“I made a promise to myself to always honor my Aunt Pearl for the example she set, and the encouragement she gave me to follow my dreams,” said Durant.

The KD VI Aunt Pearl pays tribute to KD’s aunt with a pink floral pattern on the upper and highlights of blue with subtle pearls.  The floral motif on the shoe is similar to the pattern on a robe that Aunt Pearl often wore.

Adorned with a Kay Yow Cancer Fund logo on the tongue, the special edition shoe raises awareness in the battle against women’s cancers.  Proceeds from the shoe will go to the Kay Yow Cancer Fund that was founded in 2007 and an organization in which Nike is a founding partner.

Founded by former North Carolina State University head women's basketball Coach Kay Yow, the Kay Yow Cancer Fund is committed to finding an answer in the fight against women's cancers through supporting research programs and related projects.  One recent project includes a $100,000 grant awarded to the Tulane Cancer Center, in support of Women’s Lung Cancer research. Coach Yow believed strongly that coaches and athletes share not only a community, but should also share in a cause much larger than any game.

The KD VI Aunt Pearl shoe is available on Feb. 27 at Nike.com and select retail locations globally. There is also a matching t-shirt and hat that will be available in Feb.

ABOUT THE KAY YOW CANCER FUND: