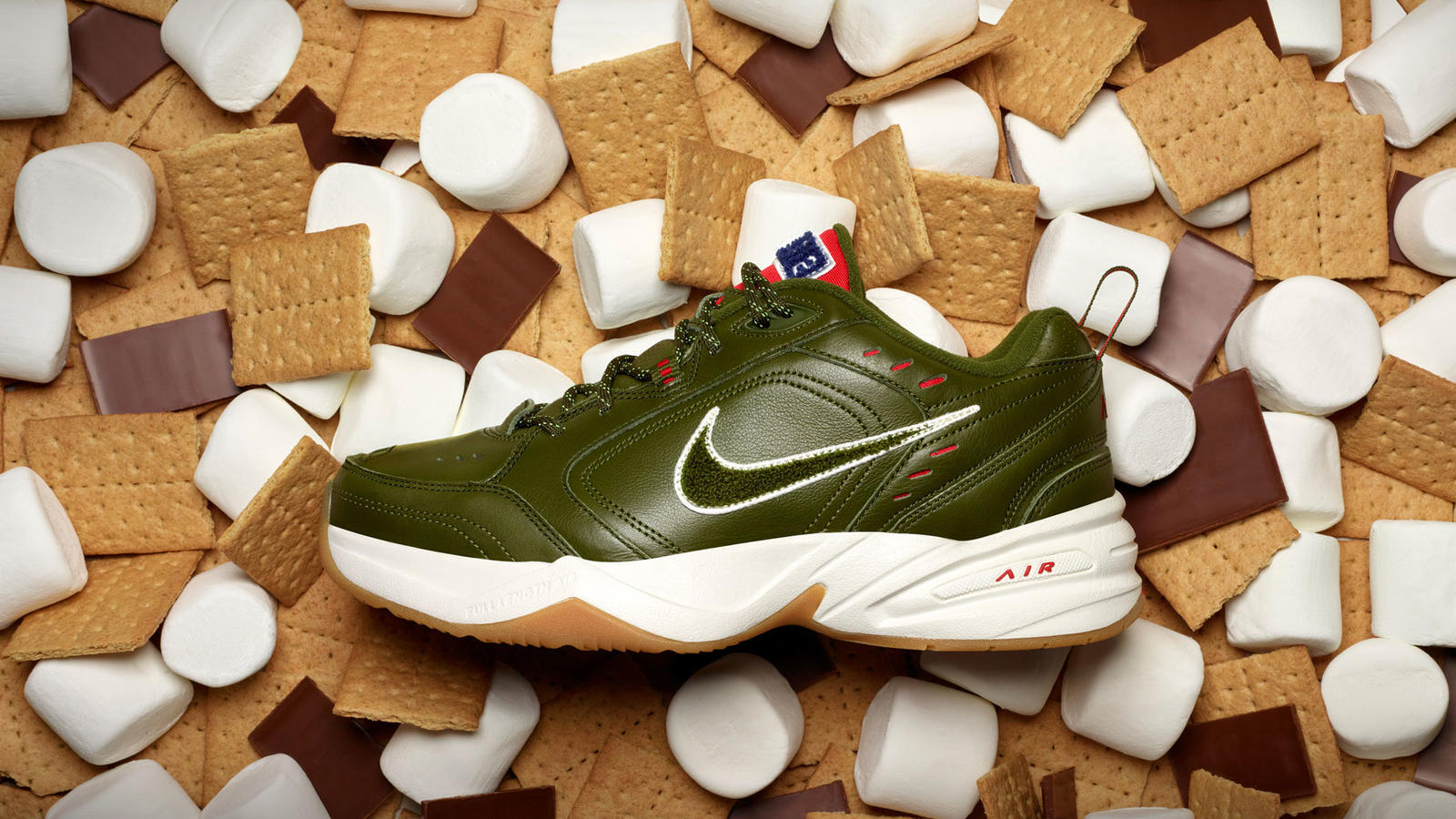 If Father’s Day were a shoe, it would be the Nike Air Monarch. The wide, comfortable cross-trainer that has remained a mainstay in the Nike line for almost two decades and four editions has also carved out its fashionable niche in the “dad-shoe” demographic.

To honor the shoe’s origins, Nike is releasing limited pairs of a special-edition Nike Air Monarch IV Weekend Campout, featuring design elements that celebrate activities between fathers and their children, such as camping.

The green leather upper and reflective rope laces were inspired by vintage army canvas tents, while the twill merit badge-like logos speak to the allure of the great outdoors.

Within the last five years, the shoe’s devotees have been primarily fathers. But the Nike Air Monarch has evolved (if ever subtly), and its inspirations have cut across different ideas, places and figures. Read on for an abbreviated, four-part history of the Nike Air Monarch’s rise to fame.

The idea for the original Nike Air Monarch began during a pivotal point in Nike Men’s Training history. The turf training surge in the ’90s had slowed down, and Nike faced competition from brands that had a grasp on the no-frills older male consumer. It wasn’t Nike’s top-performing market, but it was a valuably stable market, and early leaders on the Monarch knew that the brand needed an impressionable shoe to spur growth in the training sector again.

To show this strategy at work, the team found inspiration from – of all places – fast food.

“We talked at length about how everyone buys fries and fountain drinks at fast food restaurants, because those items are seen as essential parts of the meal,” says Dave Schechter, VP of Nike Max Air footwear and a former Monarch merchandising team member. “We realized we needed our version of a fries-and-soda type of shoe to act as that all-day, everyday shoe in our line.”

The goal was set: create the most comfortable white-leather training shoe available on the market. Designers completed their early sketches of a width-variable shoe that went big on comfort (the initial moodboards included an image of a foot dipping into a bucket of whipped cream). To learn more about the practical details the target buyer would want, the designers scouted a theme park to watch the American male on summer vacation. Interviews with men at the park revealed the desired features of the shoe, like a suitably-cushioned collar and tongue.

The Second Act: A Midwestern Basement

The decision to update the Nike Air Monarch I came in 2003 after sales continued to climb month over month. To draw up some inspiration for the next iteration, a designer secured a small conference room on campus and redecorated it with wood paneling, a leather recliner and a neon beer sign – all to remember the setting that the ideal consumer might return to. The sight brought to mind the archetypal father in American popular culture, one who wants to relax after a long day at work. Rather than overhaul the design, the team changed only a few basic elements for the Nike Air Monarch II, including updating some internal construction, adding traction patterns and a pivot point in the outsole for rotation and adding textures in areas that wrinkled.

Additionally, social media channels parodically raised the shoe’s profile in fashion as early as 2013, but it would be people who would nudge the shoe toward a different cultural status. One person played an especially important role: Seattle Seahawks coach Pete Carroll, who was first seen wearing the shoe while roaming the sidelines at USC.

“Hands down, my favorite quality about the Monarchs is their style. They look good,” says Carroll. “And they’re utility footwear – you can go everywhere with them and they travel well.” 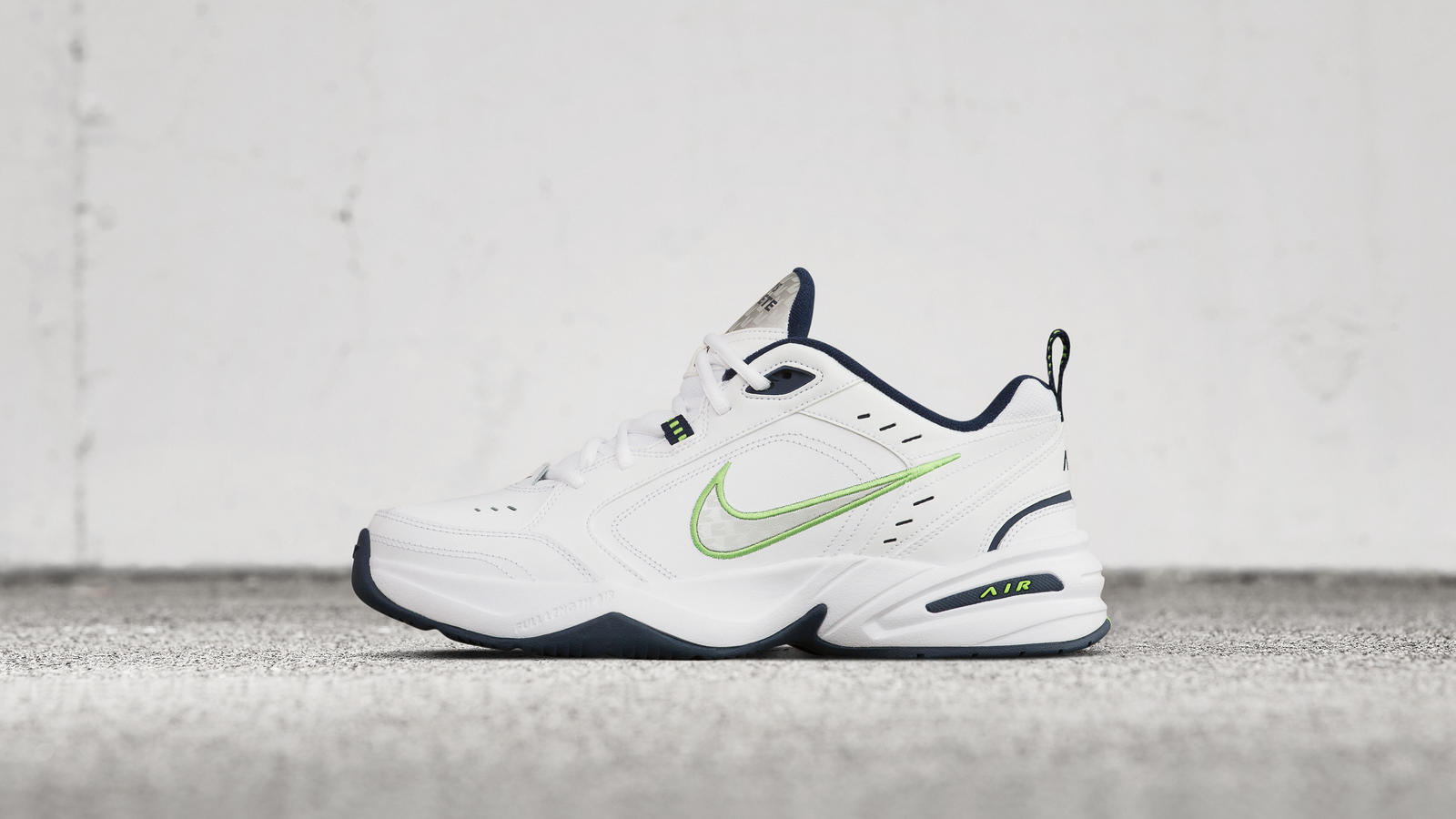 Nike gave Carroll a personalized white/green colorway for a Seahawks regular-season game. (“In the moment, I’d like to think I felt like MJ when he got his very first Jordans,” Carroll jokingly said.) He praised the comfort of the Nike Air Monarch IV, and from then on, the shoe steadily flashed into the public eye as the sports world's most stylish (as well as street style icons) brought it into their wardrobes. Quickly, the Nike Air Monarch solidified an unironic new role: fashion statement.

“I’m not surprised one bit that the Monarchs are a fashion statement,” says Carroll. “I always thought there was great potential for the Monarchs, especially considering their comfort and style."

The Nike Air Monarch IV Weekend Campout releases June 11 on SNKRS in North America, June 14 on SNKRS in Japan and will be available mid-July on nike.com in Europe.