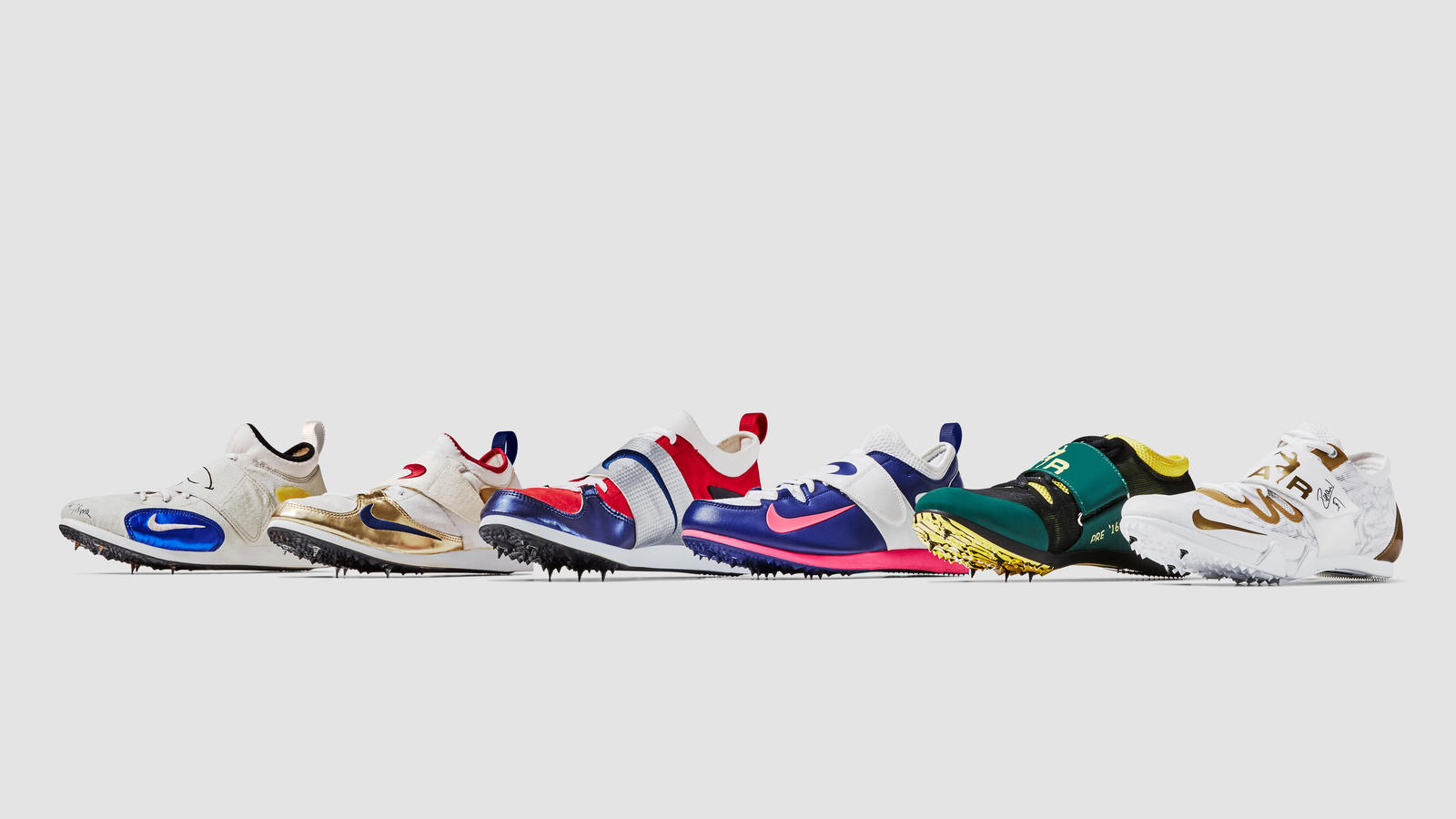 Celebrated Nike designers Tinker and Tobie Hatfield possess irrefutable gumption. Their penchant for conceptualizing and manifesting crazy notions — a shoe that laces itself, a sneaker inspired by a t-shirt — is world renowned. That this radical mentality dates back to their early days is lesser known: The brothers were university-level pole vaulters, one celebrated for his speed (Tinker) and one for his technique (Tobie) — both for their daring. ​ 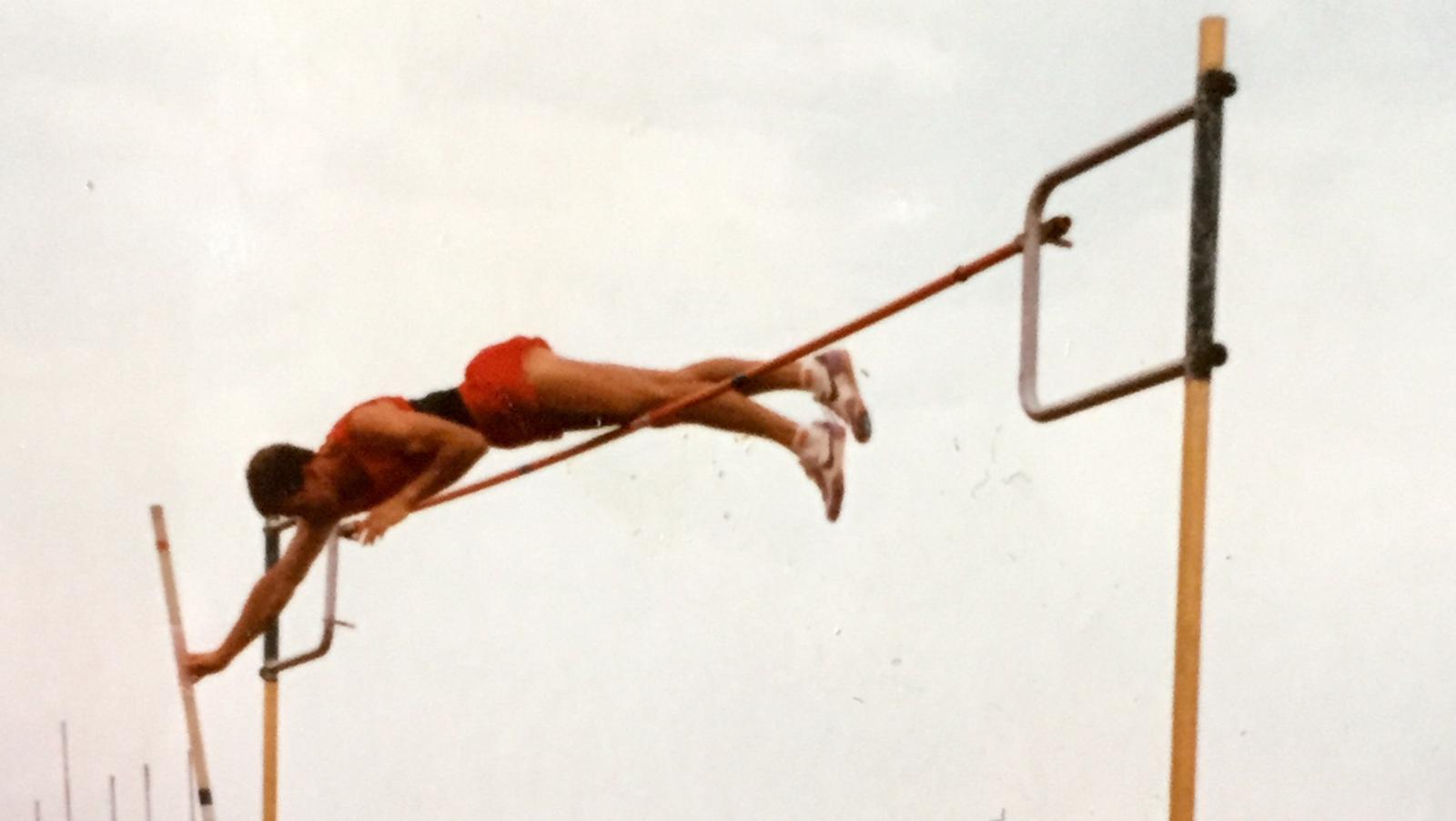 After all, “[pole vaulting] is like running off the edge of a cliff with a parachute,” Tinker says. “If you slow down, you might not make it far enough out to hit the water. If you slow down on the pole vault, you are for sure going to get hurt.  There is a moment of truth somewhere along the line. It freaks people out.” 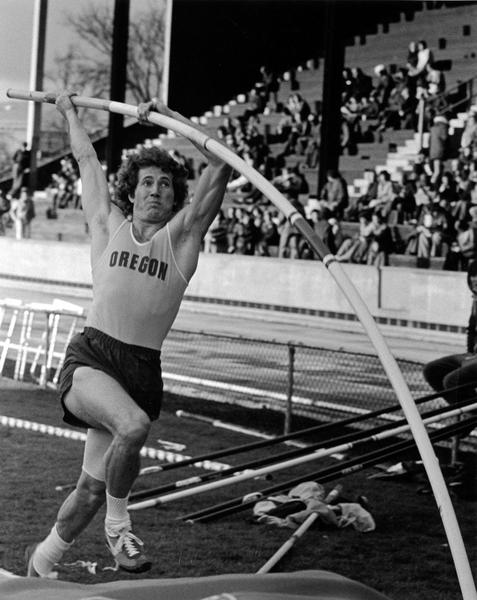 Tinker Hatfield during a meet at Hayward Field (1975).

The dynamics of launching oneself off a pole upwards into the air, however, remain the same: “The faster you go, the higher you can pole, the further you’re either going to go long or high,” Tinker confirms. It's basic physics with a complex vehicle that has ranked pole vaulting as one of the most difficult tasks in sports, up there with hitting a big league curveball and driving through Monaco’s tight chicane.

Success in the vault, then, comes down to an athlete’s ability to transfer speed, power and agility into the pole. But, as Tobie adds, “What really separates vaulters is their fearlessness.”

Despite their differing vaulting styles, Tinker and Tobie share a personal best of 5.30 meters (or 17.39 feet), a number that carried Tinker to the 1976 national trials.

In Tinker and Tobie's vaulting days — the late ’70s and early ’80s — jumpers wore sprint or distance spikes and short running shorts with mismatched tank tops. At the University of Oregon, these tops were hand-dyed by none other than Barbara Bowerman, coach (and Nike co-founder) Bill Bowerman’s wife. Poles were heavy and unwieldy, “horrible big things,” Tinker recalls, and early pits were formed by three-walled fold-up boxes packed with foam-filled gunny sacks. By the turn of the millennium, equipment and apparel had evolved. Poles became lightweight, crafted from flexible fiberglass, and apparel aerodynamic, but footwear stagnated at generic jumping-spike designs (one spike was expected to serve the long jump, triple jump and pole vault) until 2001, when the female world-record holder at the time asked Nike for a new shoe. The request incited the Hatfields’ passion for the pole vault and their belief in the need for an event-specific spike, a road that eventually led to the Nike Pole Vault (PV) Lite. 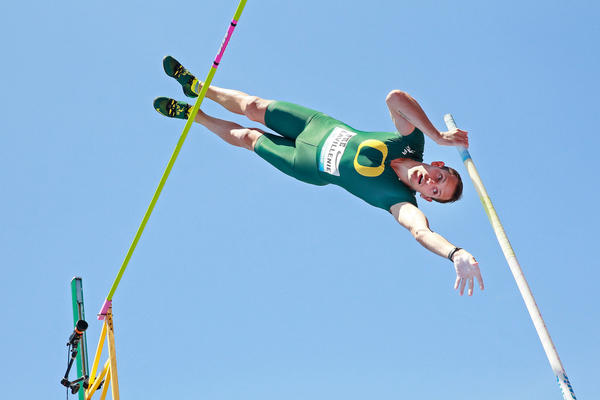 The brothers knew that the shoe needed to be stable to counteract the front-loaded pull of the pole. So they crafted a new plate, flatter than the more concave foundation of a long-jump spike, which services the toe-off required for horizontal air. To attend to a pole vaulter’s upright (as opposed to forward-leaning) jumping position, the Hatfields also added a bit more heel. Finally, they addressed lockdown: pole vaulters necessitate a tight fit for stability, but their competitions can last three of four hours, so traditionally they had to untie and retie their spikes between jumps. To circumvent this frustration, the designers attached a thin, stretchy Dynamic Fit strap over customary laces to allow athletes to cinch and un-cinch the upper with one swift movement. Wearing the PV Lite, their muse promptly jumped to the indoor world record.

Next, upon athlete request, the Hatfields graded the shoe for a male jumper, who wore it when he won gold in Athens in 2004. From there, an external heel counter was added for a bit more structure that allowed the spike to serve pole vaulters of all ages and abilities. The result, the Nike Zoom PV II is the world’s first (and still only) commercial pole-vault spike, and the PV series remains the Hatfields' only collaborative Nike design to date.

This past year, in true “there is no finish line” form, the brothers continued to evolve the shoe, this time informed by insights from current world-record holder and gold medalist Renaud Lavillenie. Working from Lavillenie’s feedback, they added carbon fiber to the inside of the plate for more stiffness and tweaked elements of the upper, using the latest Nike technologies to make the spike even lighter and further enhance its performance. Lavillenie debuted the Nike Zoom PV III at the 2015 Prefontaine Classic; at the 2016 Prefontaine Classic, he wore a special yellow andngreen colorway that celebrated the meet’s host, the University of Oregon. Come August, he will unveil another exclusive version as he jumps for gold (and another world record). 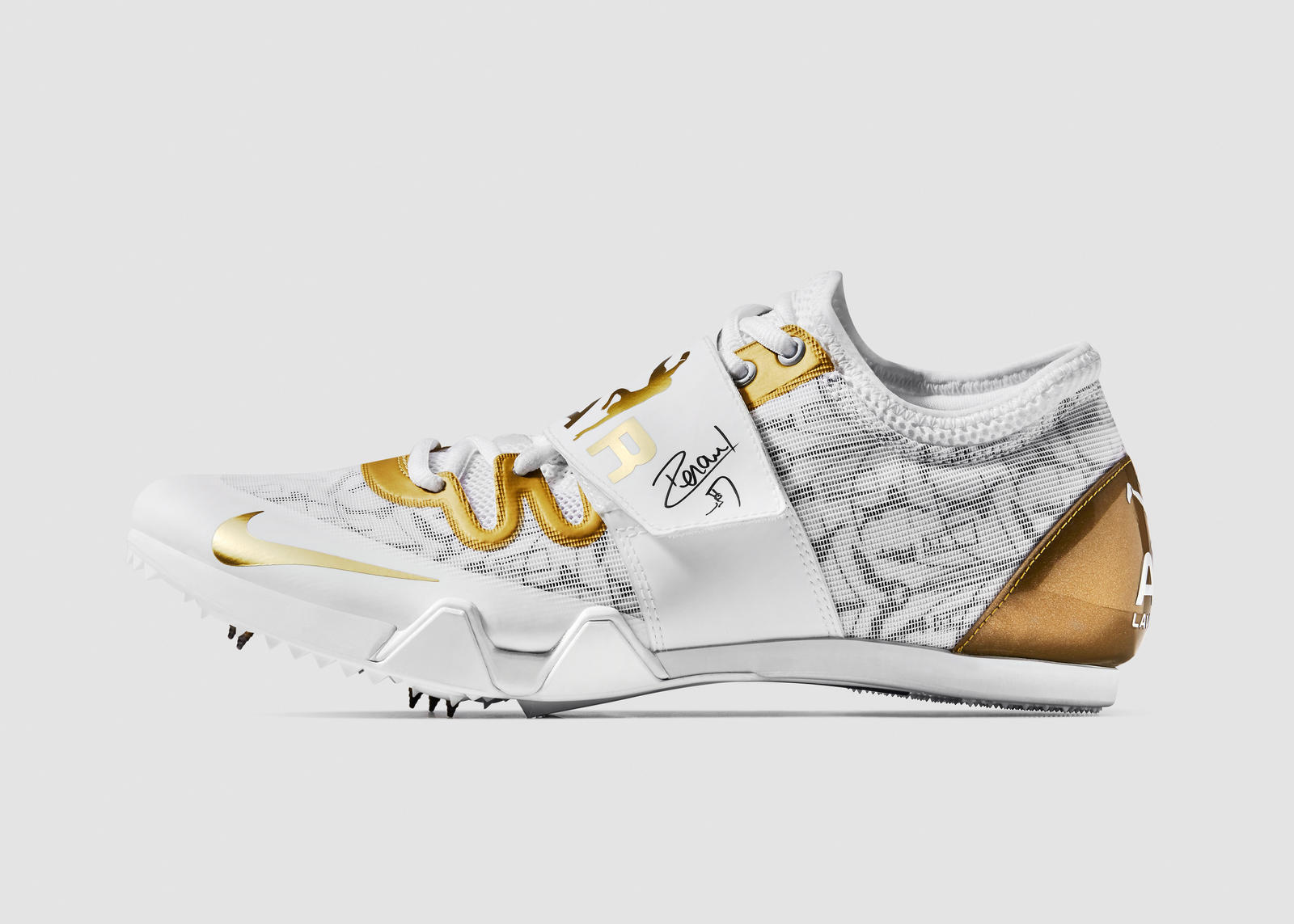 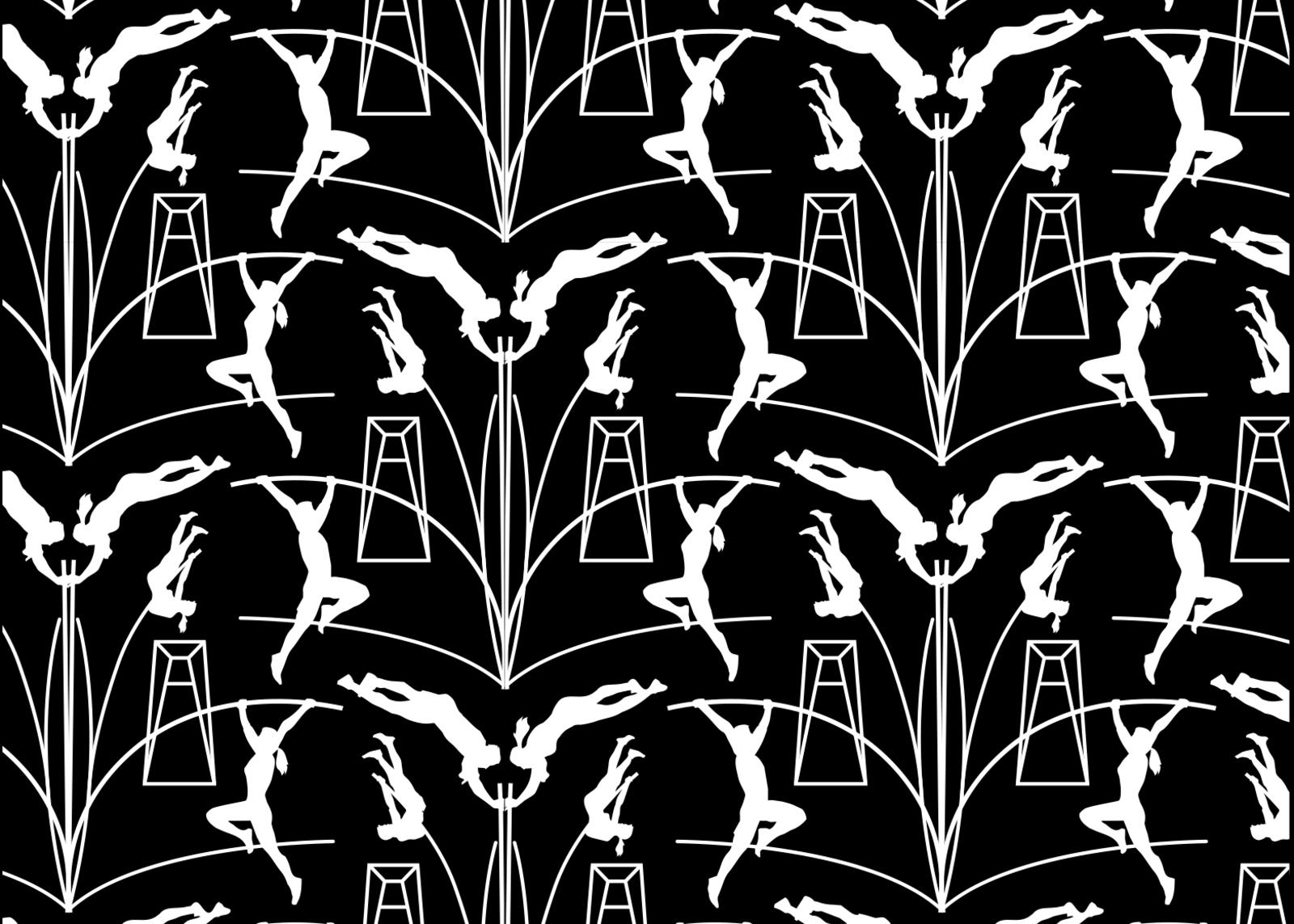