Innovation invariably requires risk-taking and ample out-of-the-box creativity. It’s about finding the magic in experimentation and inspiring designers to dream big and think differently. It’s about embracing “What if…” and rediscovering wonder.

After all, it is only by manifesting the previously unimaginable that true innovation takes place. Nike designers engage in this fantastic thinking daily. For The Nature of Motion, a Nike exhibition at Milano Design Week 2016, however, they applied it to the concept of natural motion. Starting with Flyknit uppers, they created a collection of aptly named Experiments in Natural Motion, inventions that rethink materials and take inspiration from places as diverse as cat whiskers and champagne packaging. 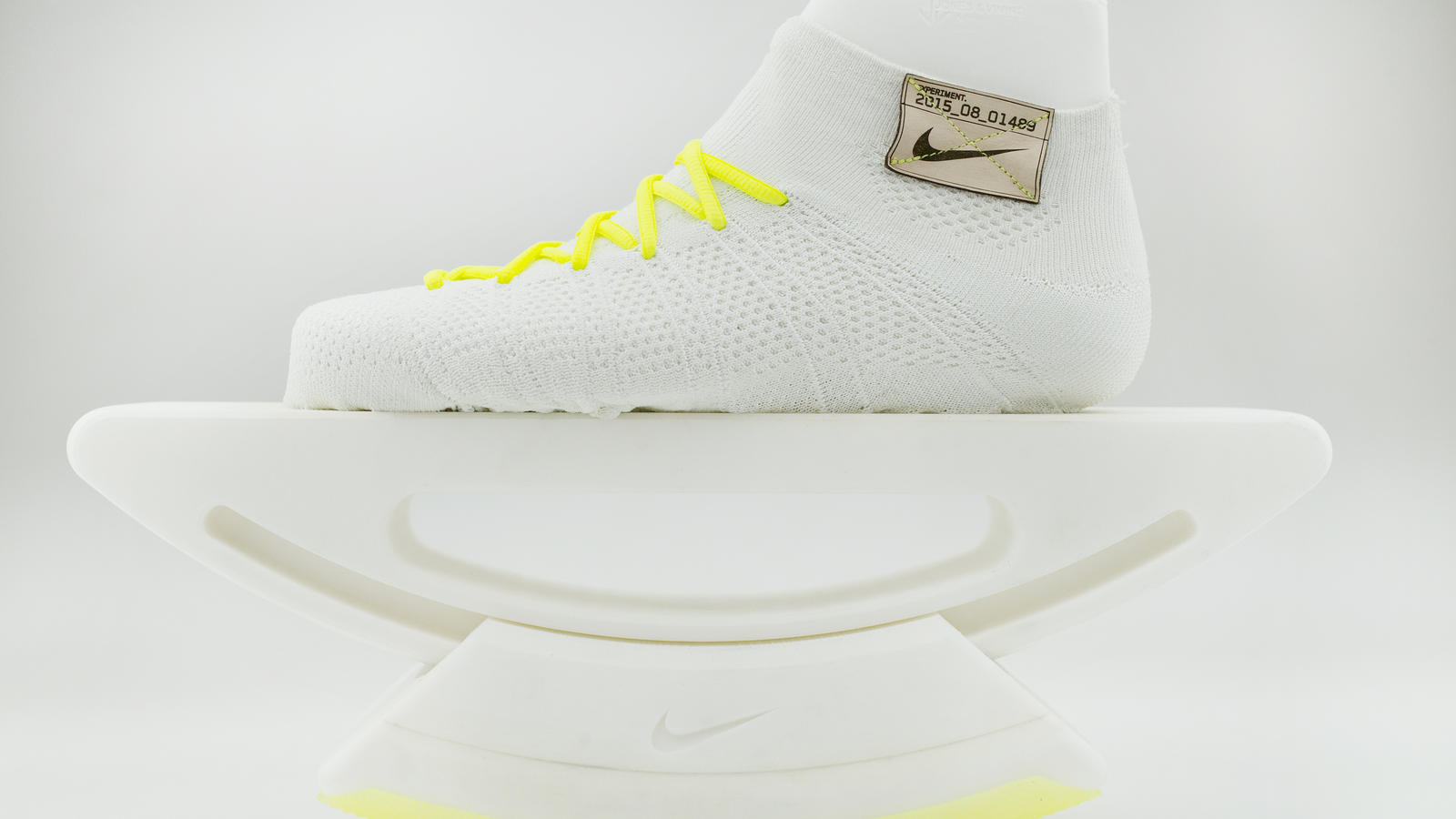 This gliding convex outsole is designed to propel athletes forward the second they plant a foot. In essence, it does the walking for them. 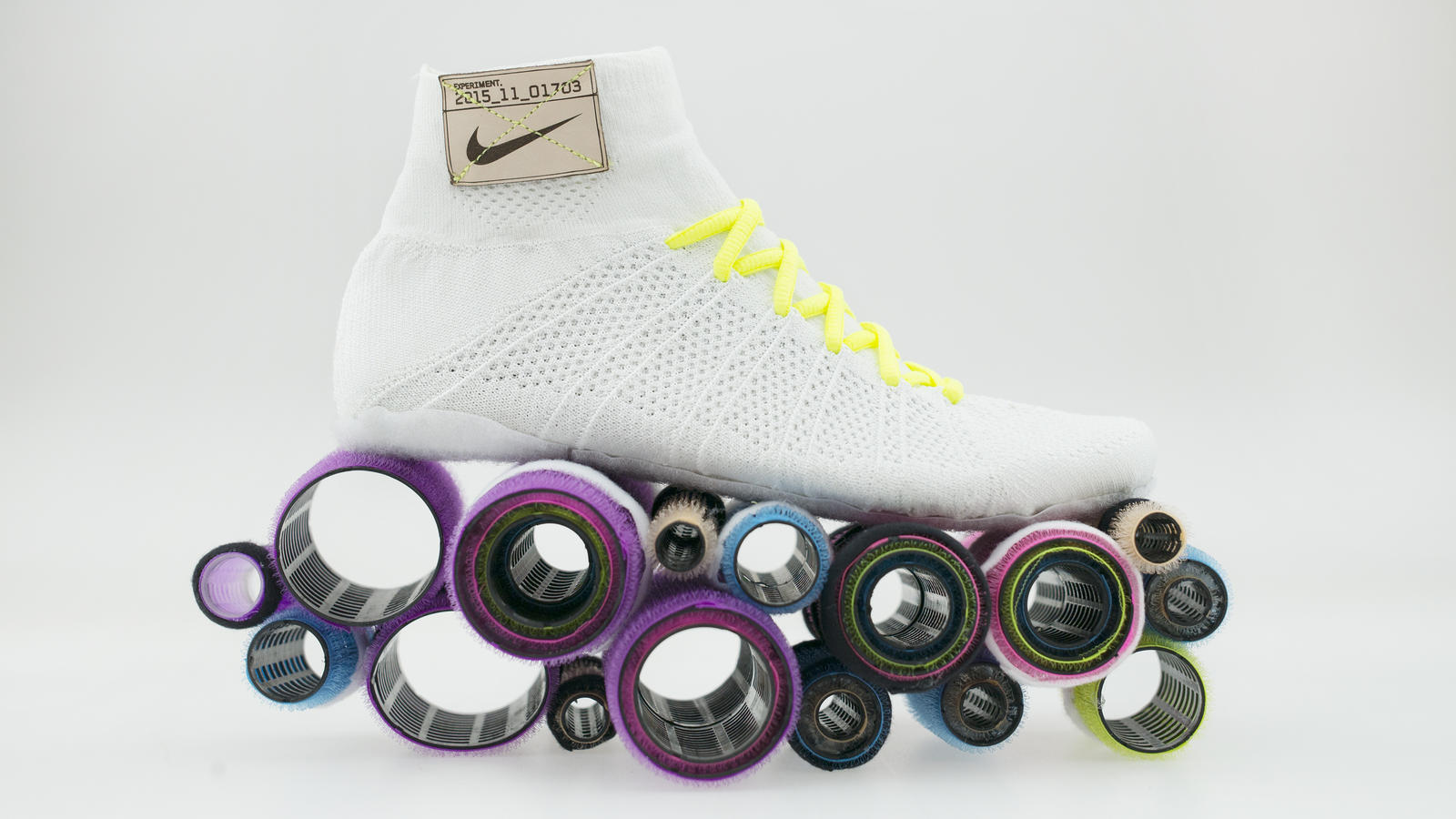 Taking inspiration from voluminous ’80s hair, this vibrant experiment in sectional cushioning turns a variety of Velcro hair rollers into a modular and, therefore, fully customizable tooling system that can be adjusted to the wearer’s preferred shoe density, height and weight. 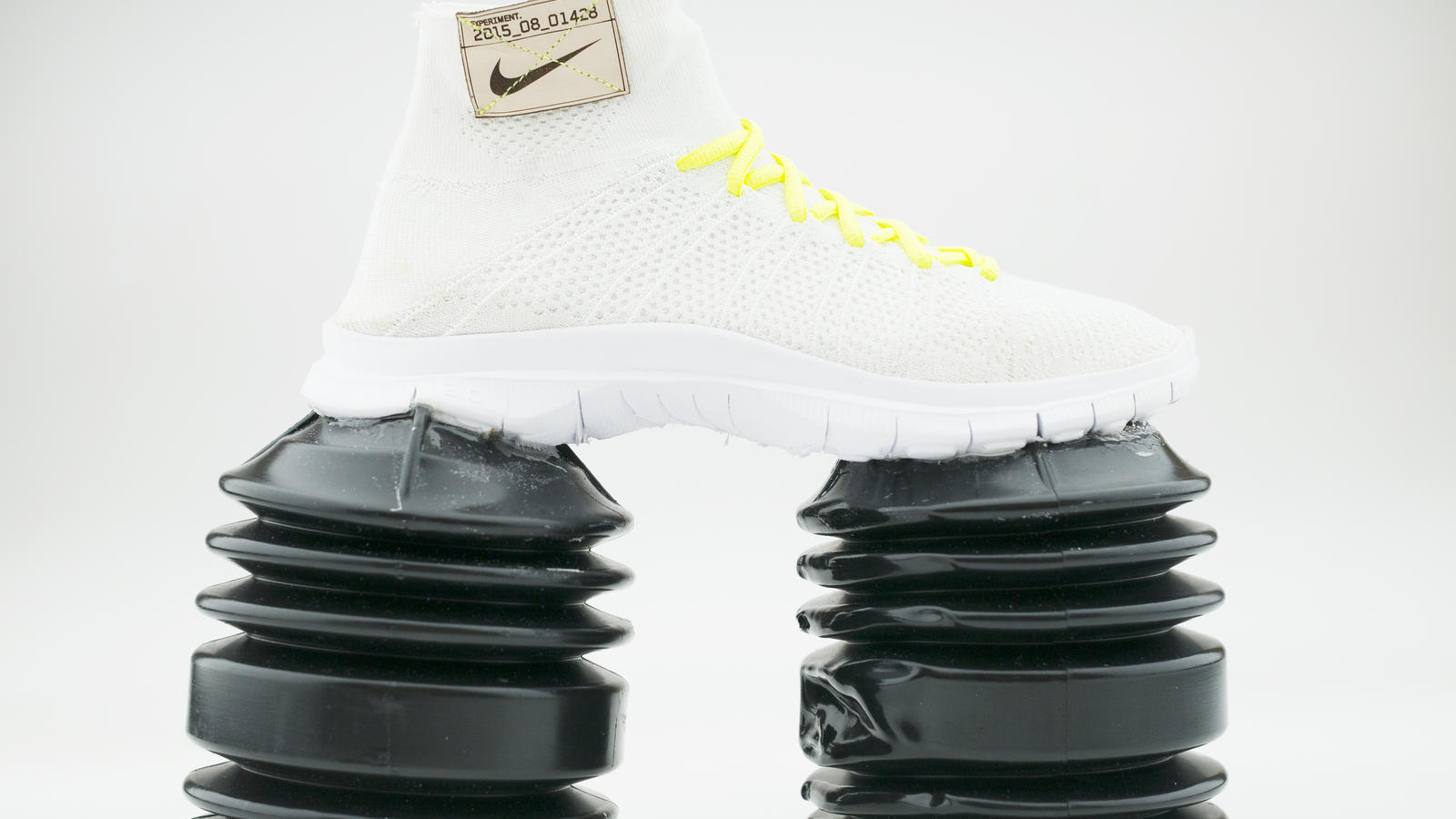 Intended to decelerate an athlete’s gate, this design employs plungers to pad foot impact and provide a touch of pace-reducing suction. 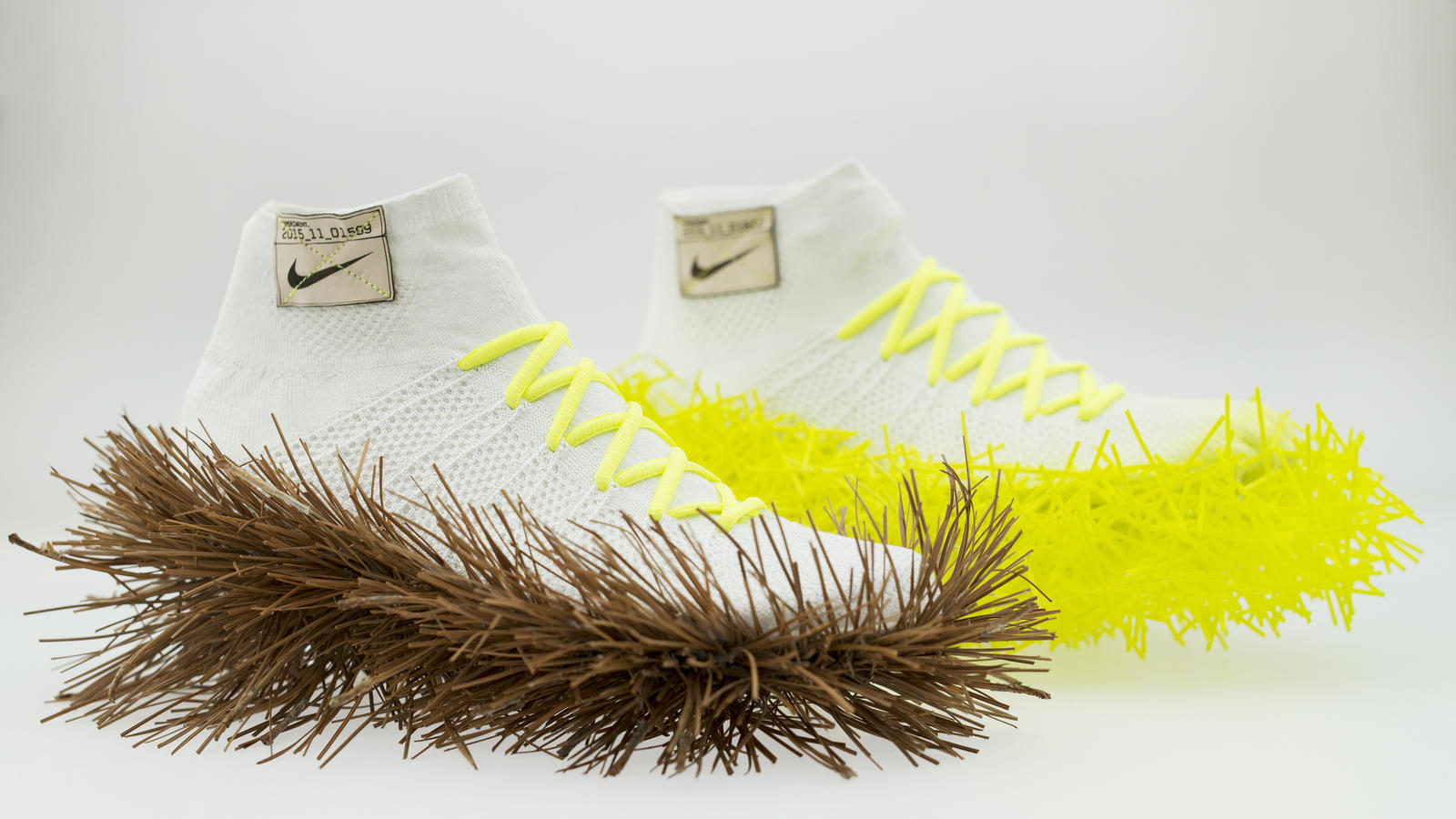 Taking inspiration from a directive delivered by Nike’s very first employee, Jeff Johnson, this design attempts to recreate the soft, resilient underfoot sensation of running on pine needles, both natural and synthetic. 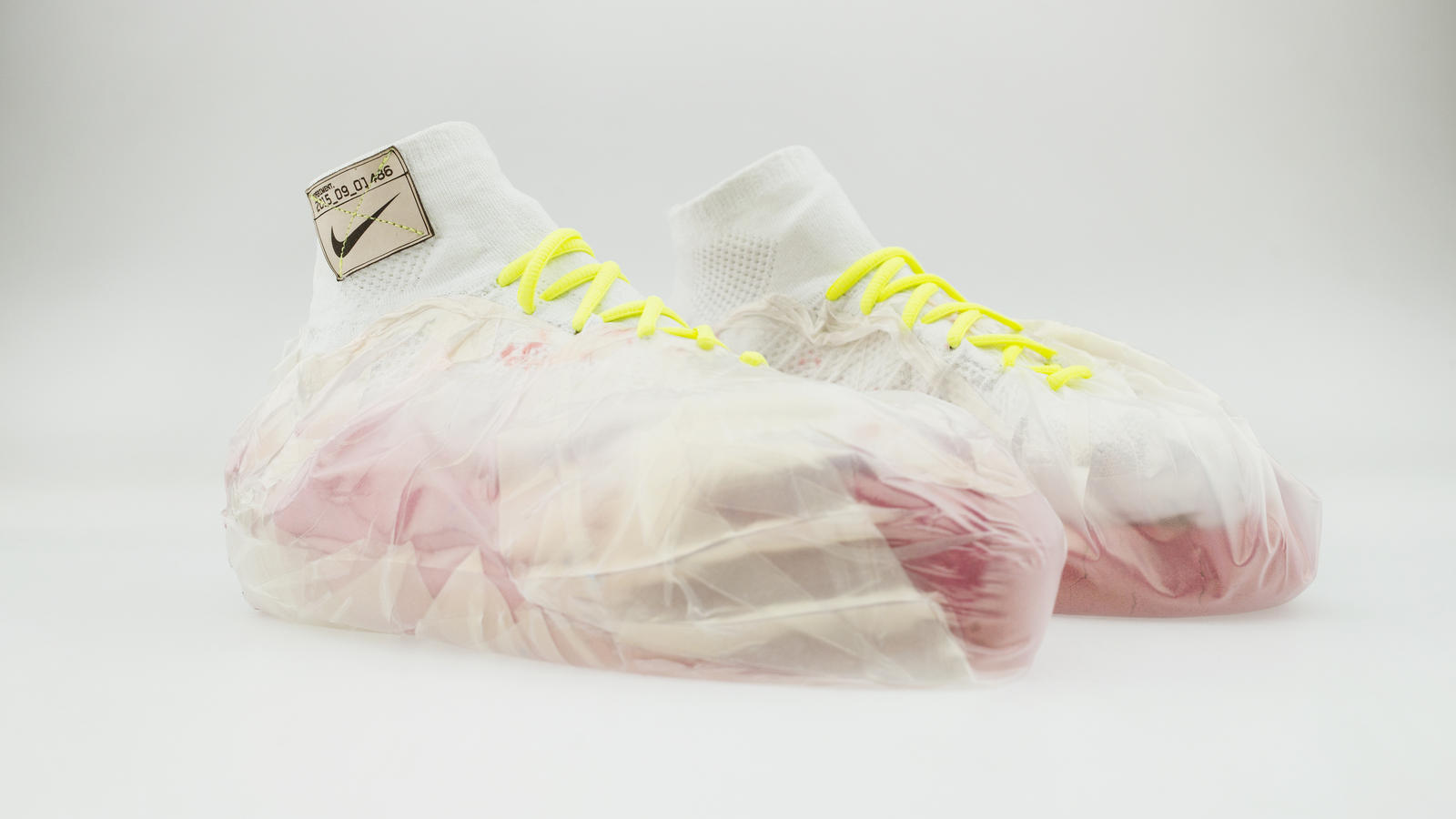 This sculptural design rethinks impact protection by filling plastic bags with kinetic sand, which mimics the cohesive physical properties of wet sand, to configure an adaptable cushioning system that cradles the athlete’s foot. 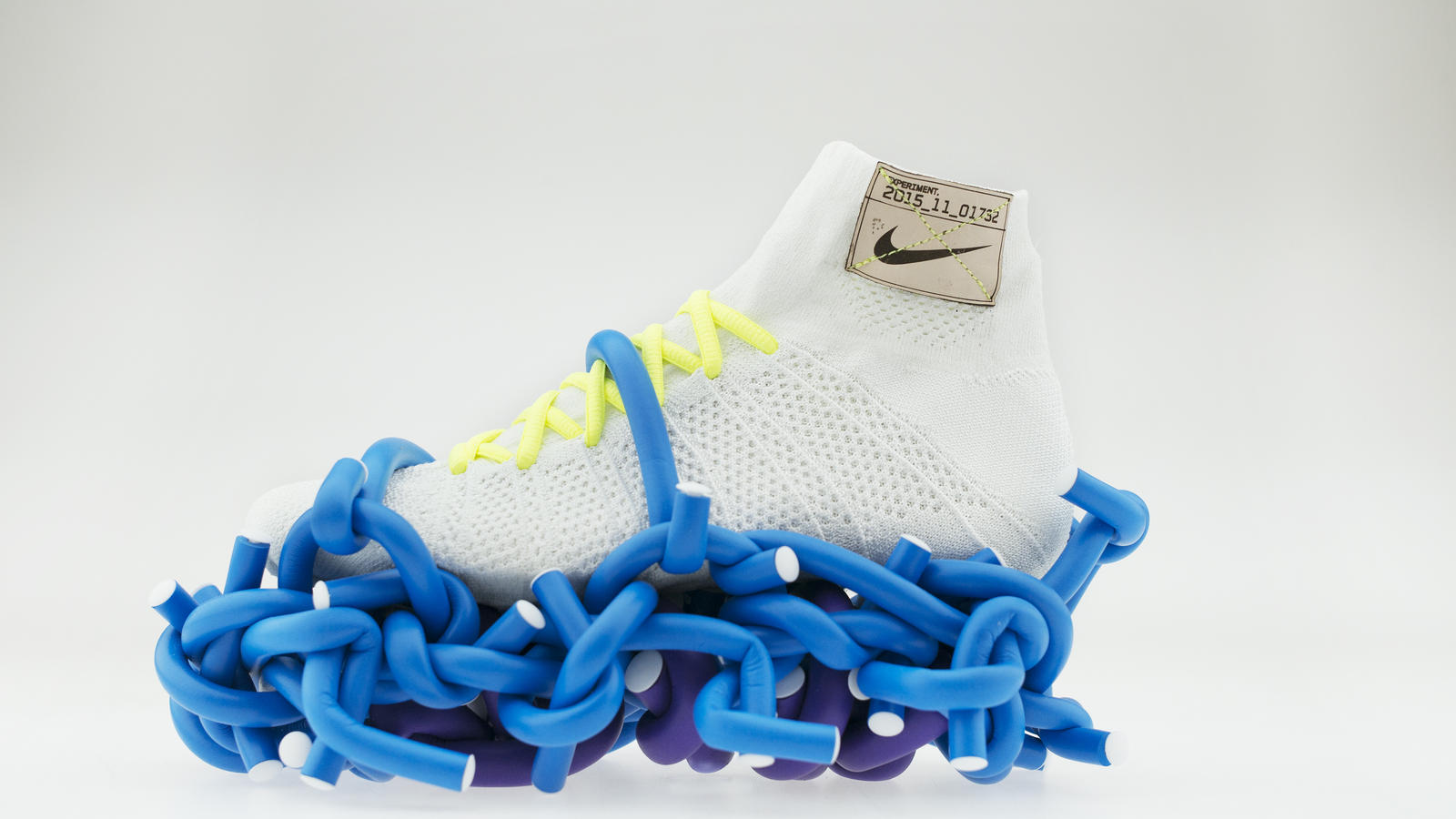 Repurposing bendable spiral hair rollers to build a footwear outsole, this entwined design investigates the bespoke possibilities of a sectional, fully customizable cushioning system that can be adjusted to the wearer’s preferred shoe density, height and weight. 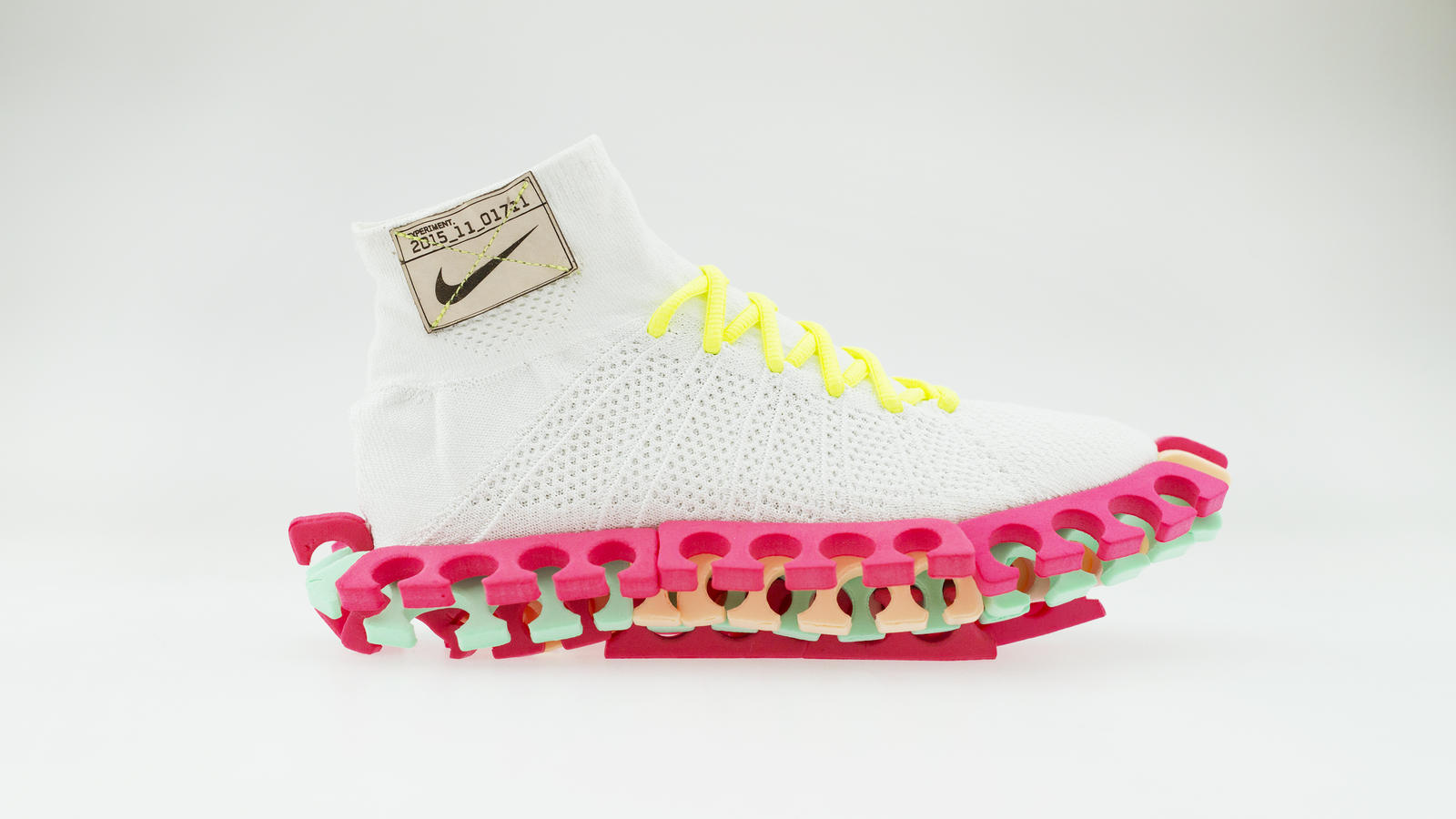 Foam toe separators traditionally used during pedicures move underfoot in this colorful design, forming a segmented cushioning system that compresses and expands upon impact, and can by fully customized to the wearer’s preferred shoe density, height and weight. 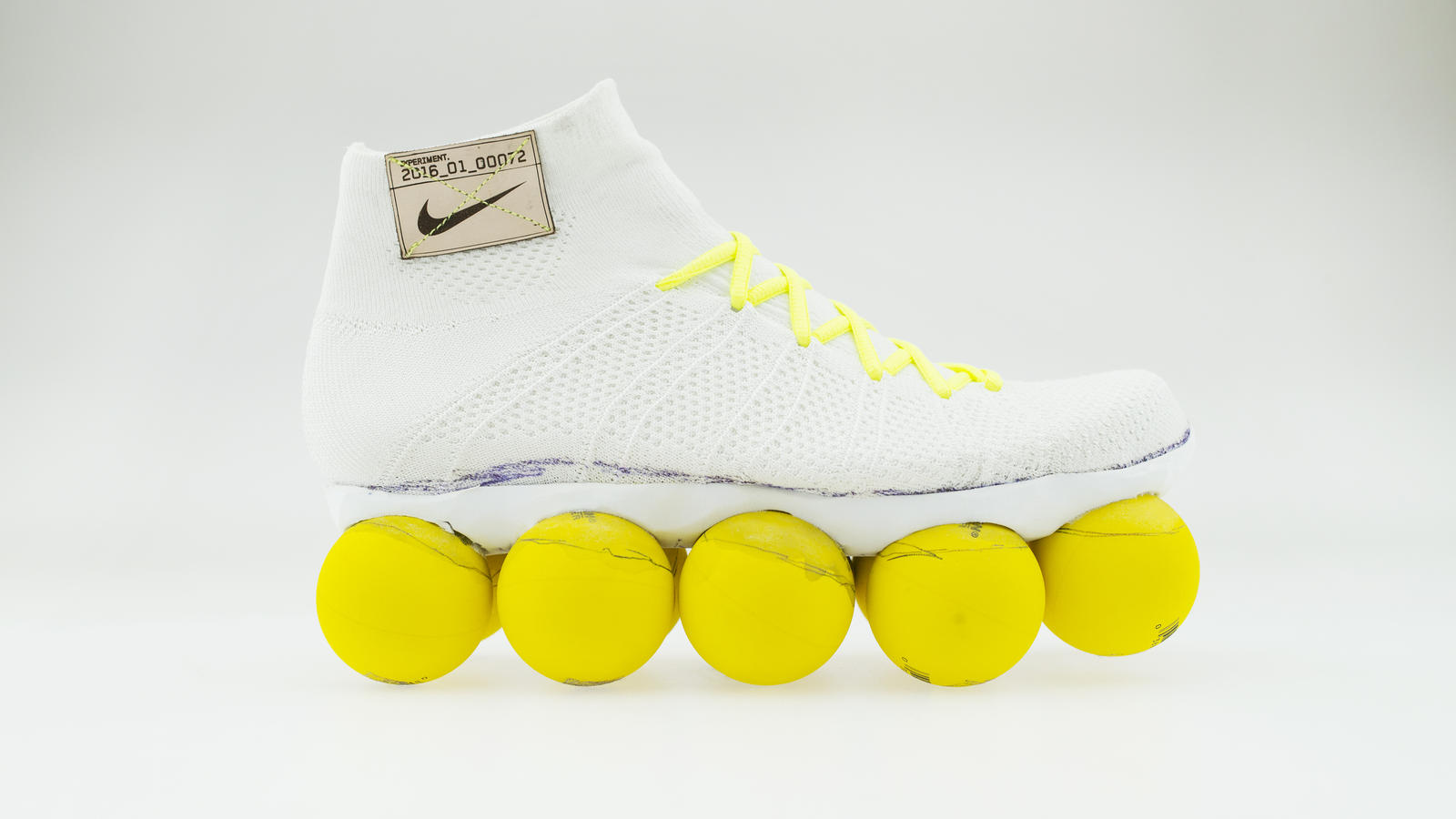 Turning everyday objects into a tooling system with evident energy return, this bold experiment brings the dream of walking on bouncy balls to life. 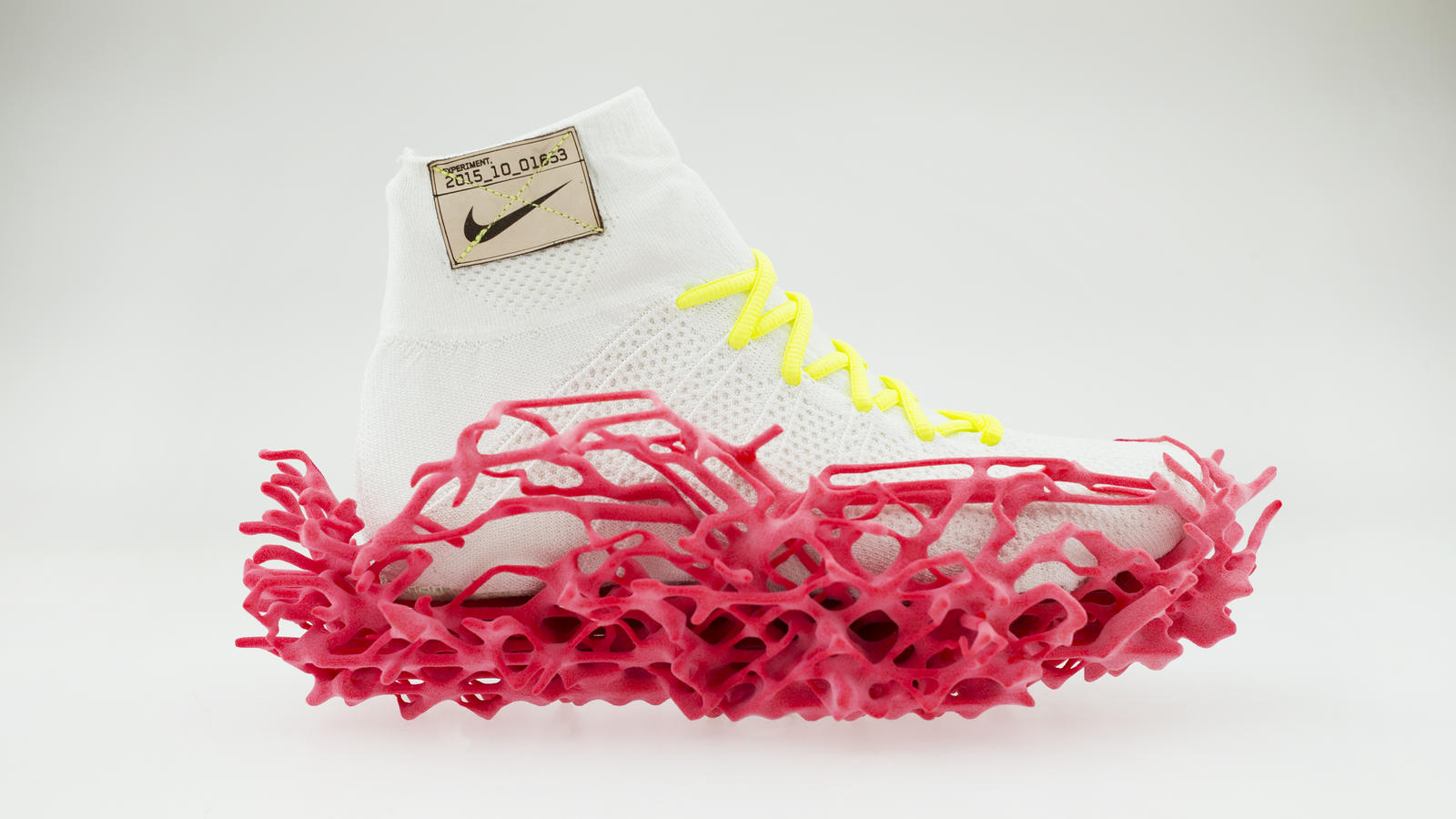 This monolithic design takes inspiration from an architectural space frame, transforming the traditionally rigid structure into an adaptive, pliable 3D-printed outsole. Based on a pressure map of the foot, it flexes and expands upon impact. 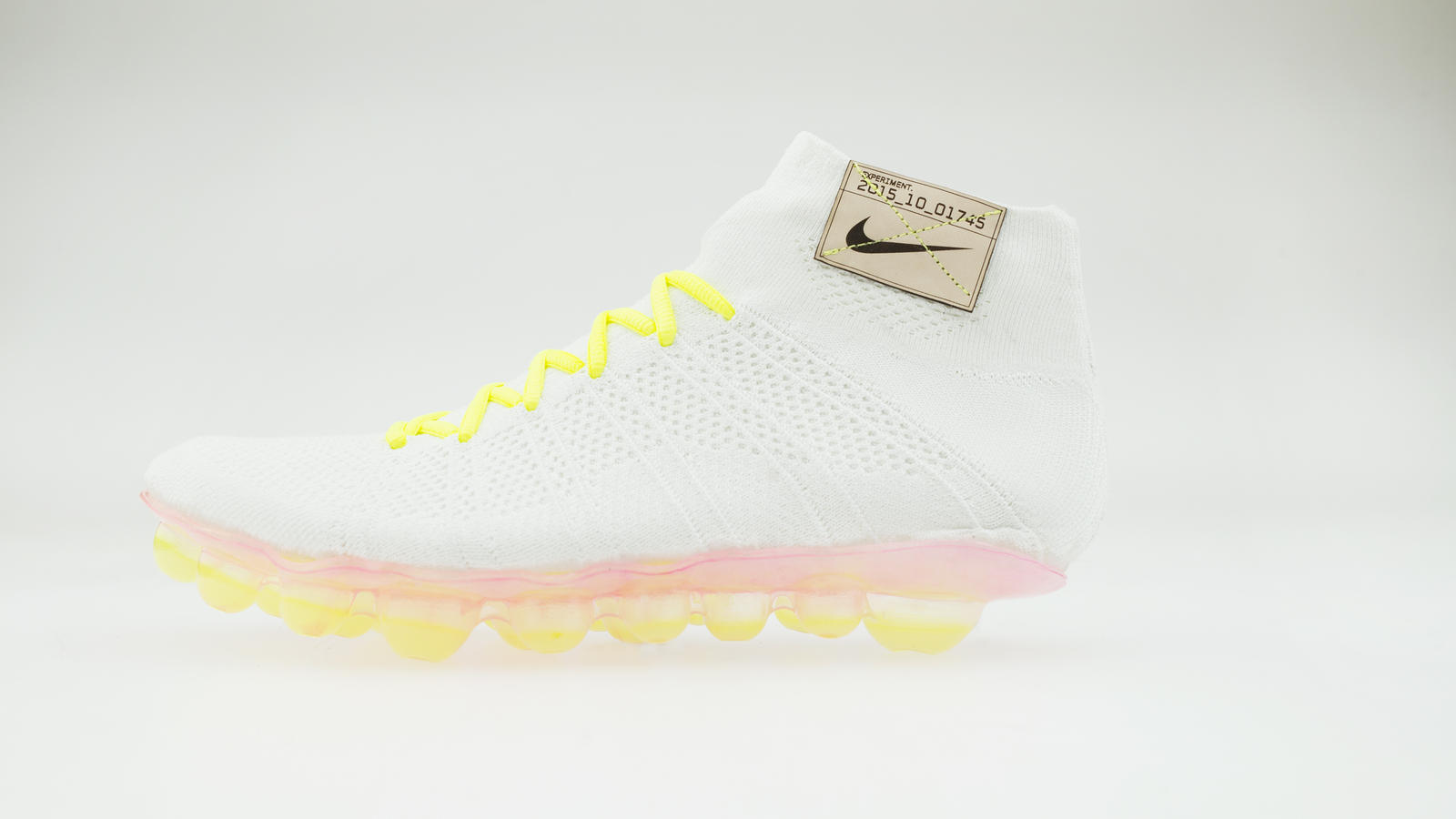 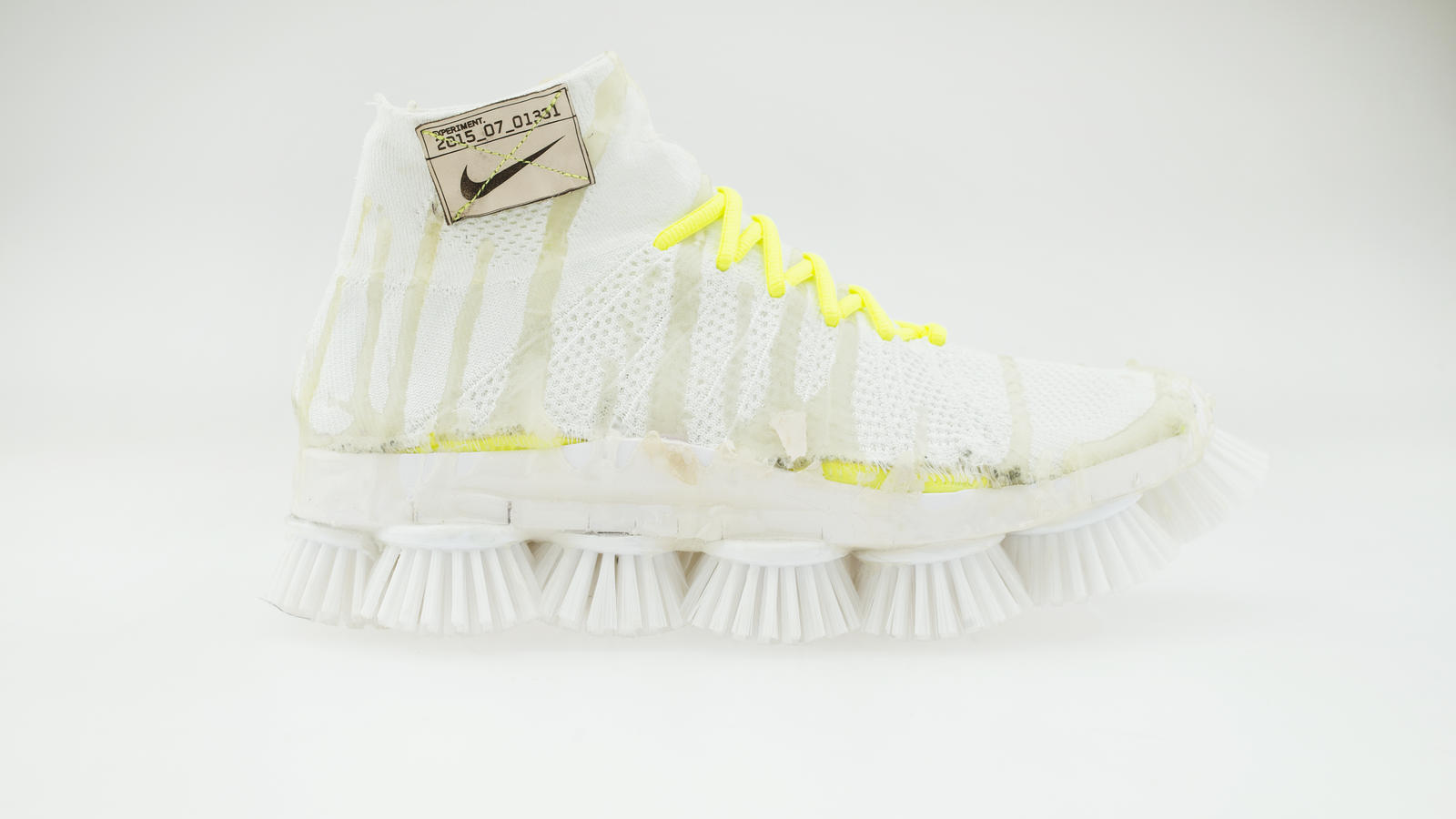 Converting standard kitchen brushes into a tooling system, this provocative experiment investigates directional cushioning, asking its wearer: Can you guide your foot strike with the bristles? 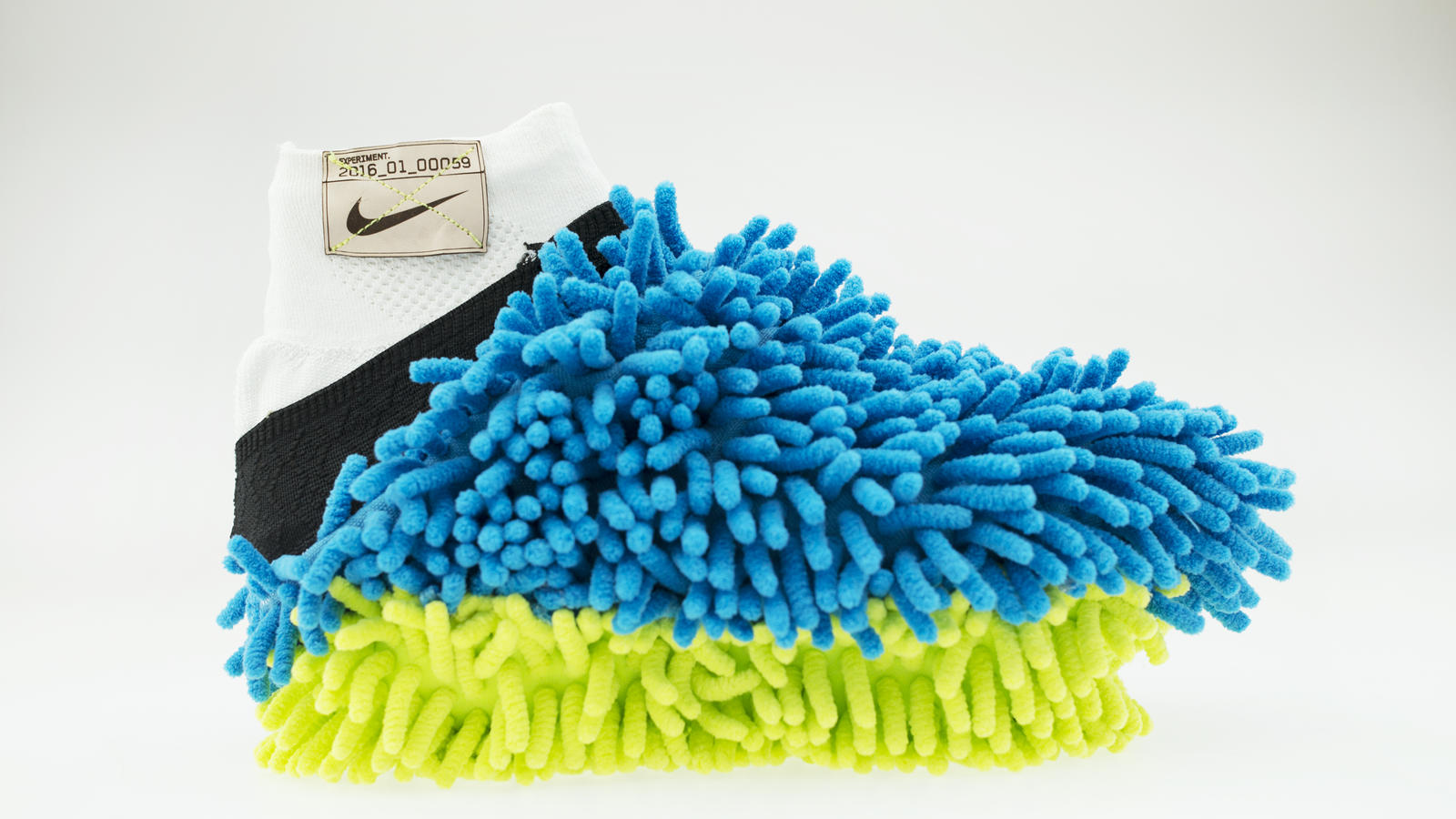 This cheeky design places a mop underfoot to form a flamboyant cushioning system that also sends a subliminal message to the competition: I’m going to wipe the floor with you! 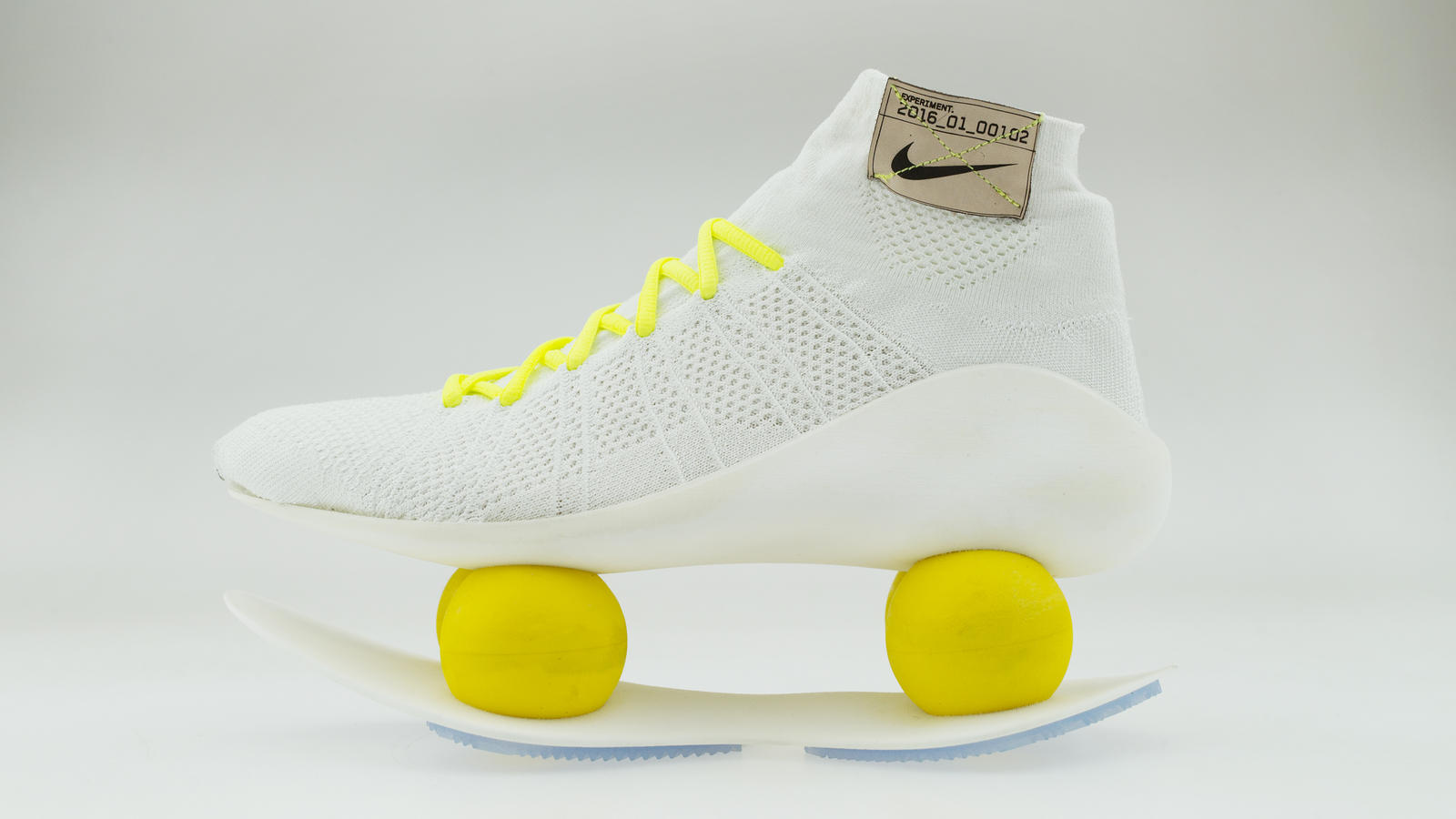 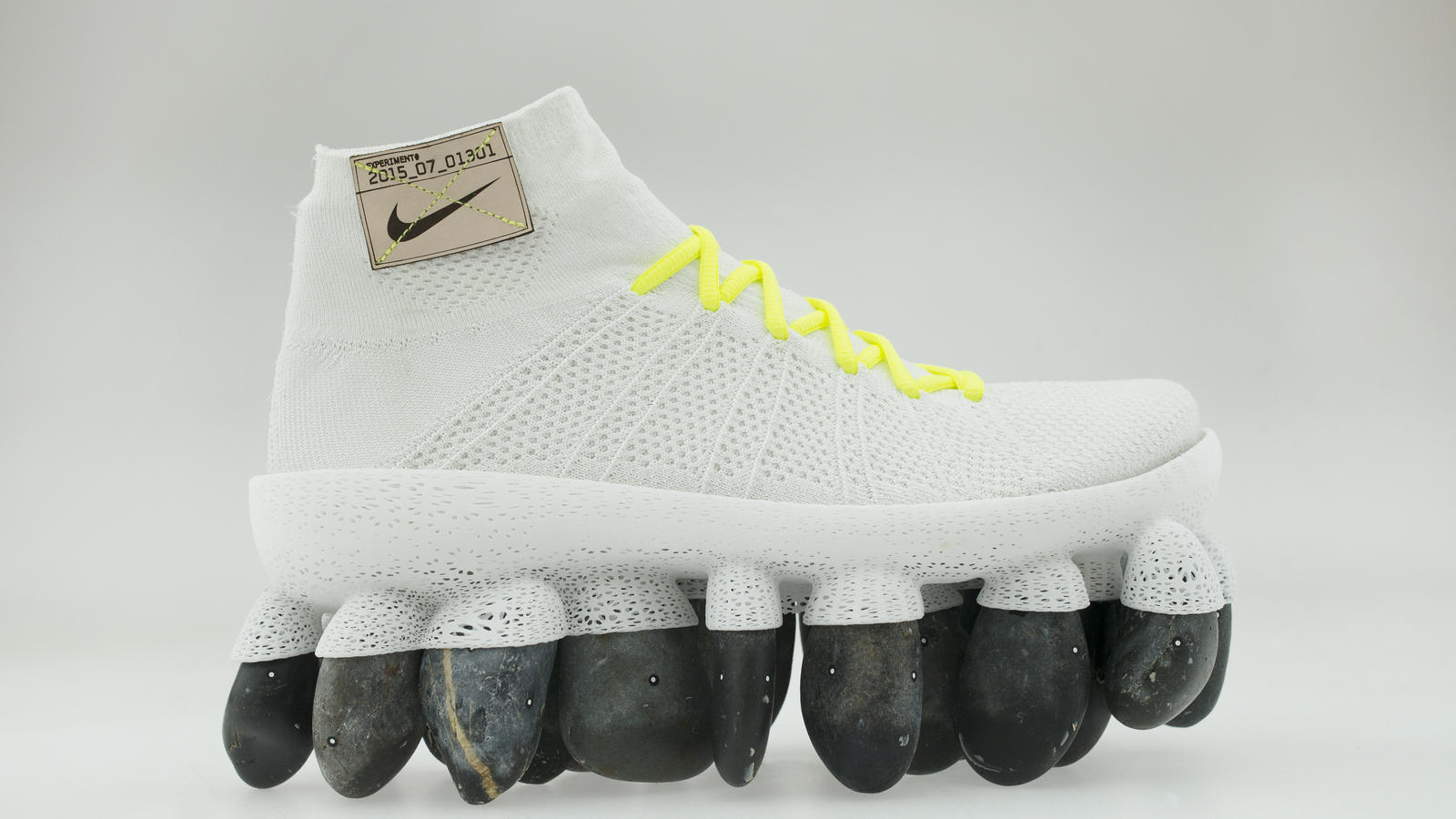 This organic experiment draws from cobblestone reflexology paths often found in Taiwanese gardens, upon which locals walk to improve their health and wellbeing. In an attempt to mimic the underfoot sensation promoted by these paths, the design incorporates an assemblage of rocks gathered at Nike World Headquarters, near Beaverton, Oregon. 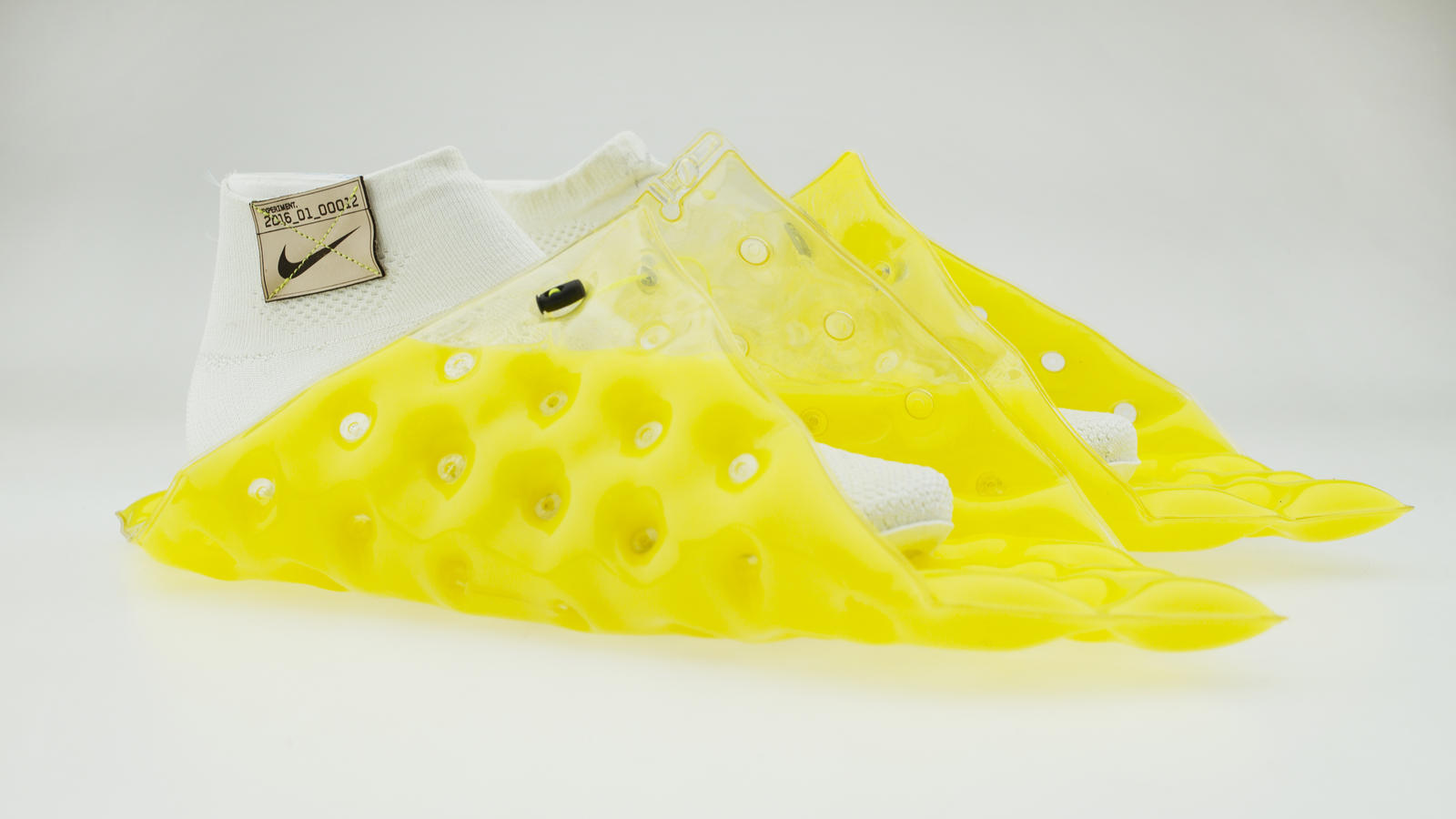 Positioning liquid underfoot to create a fluid cushioning system, this conceptual design infuses TPU Airbags with brightly colored water, injected into the bag with a syringe. 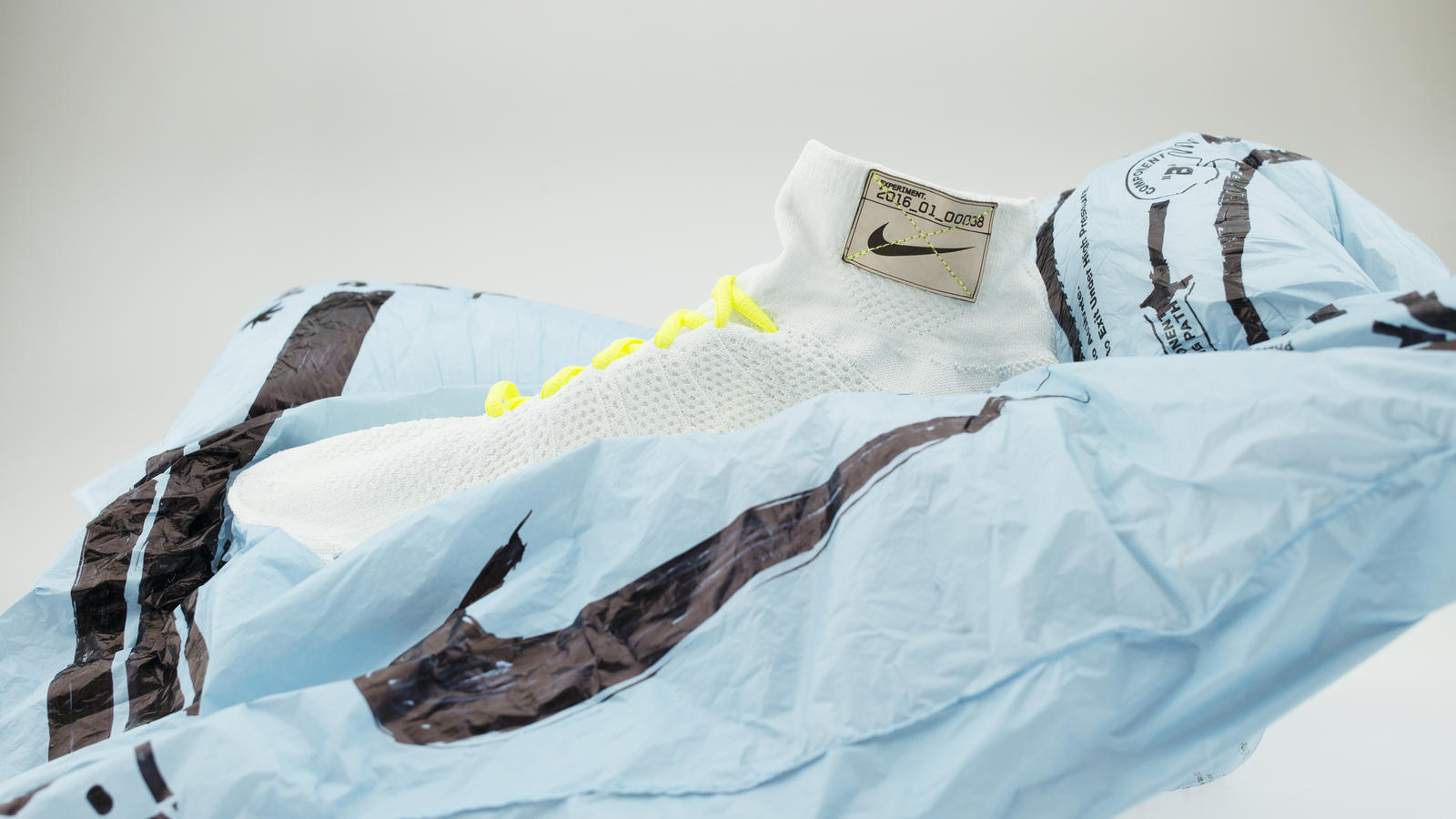 Taking a champagne-packing bag as its starting point, this outsized cushioning system relies upon an internal chemical catalyst that, when shaken, produces foam. Eventually growing around the athlete’s foot, it forms a tailored tooling system. 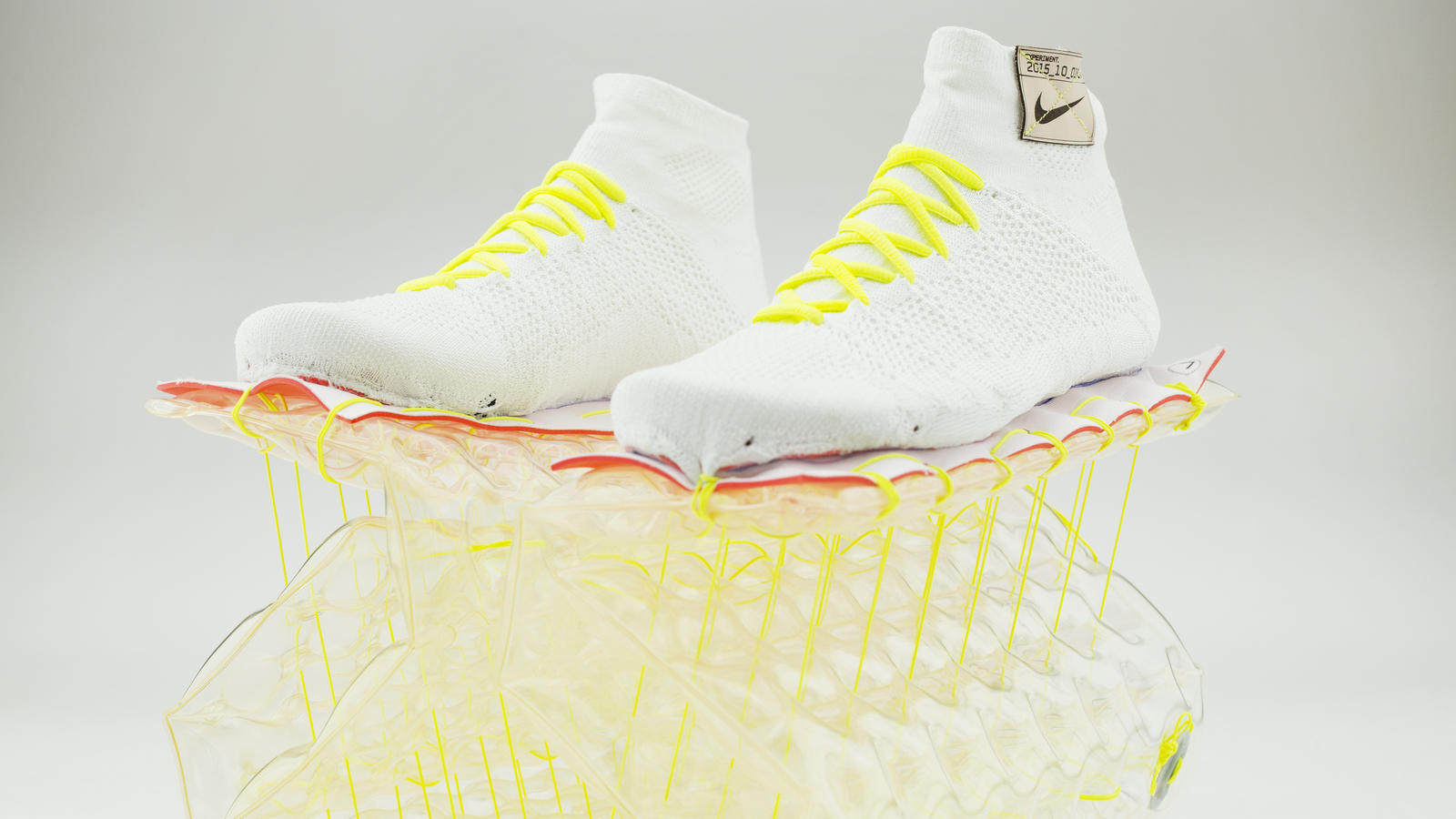 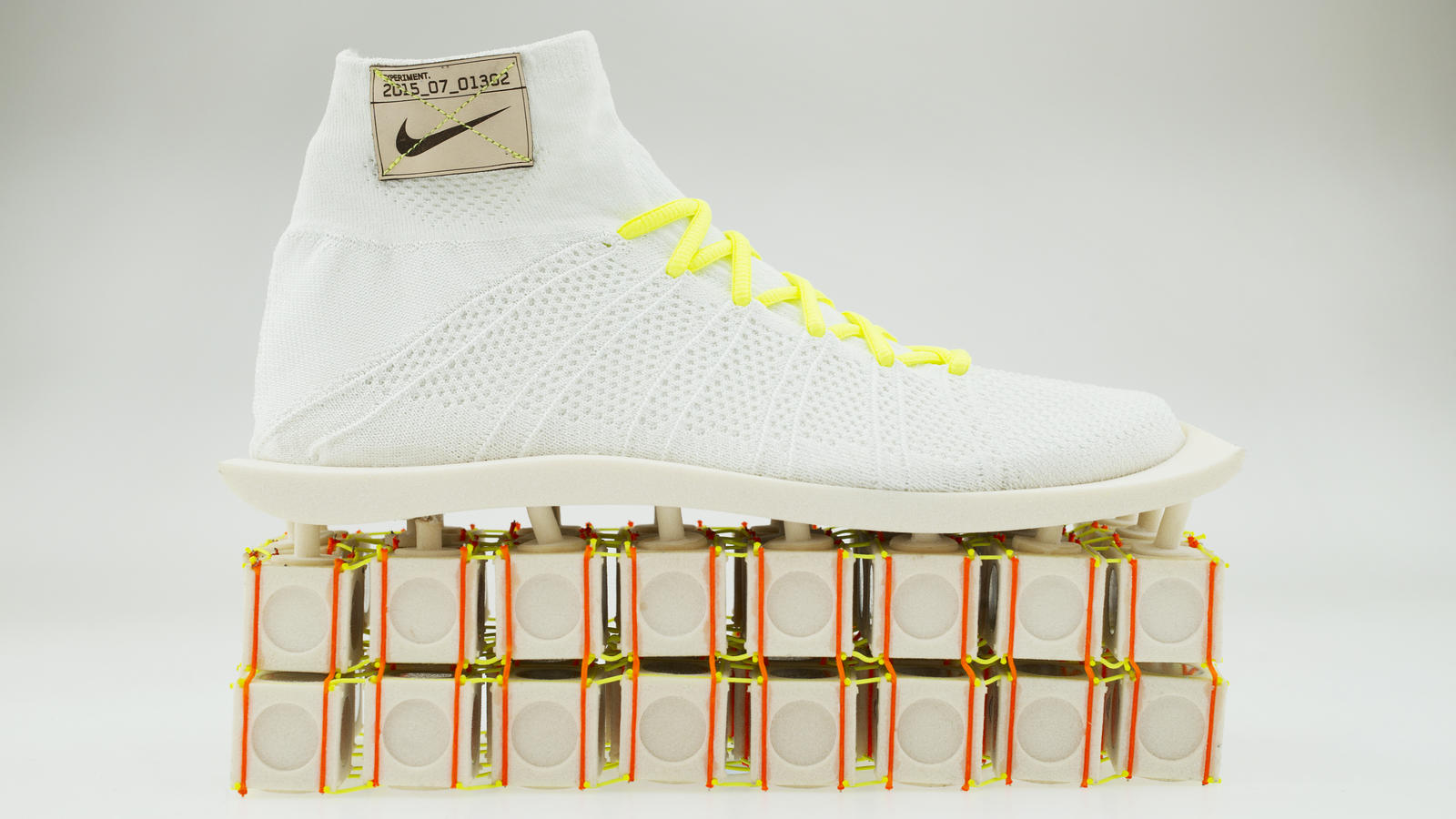 Inspired by a floating magnet table, this graphic experiment leverages the modular mobility of magnets, which are affixed by colorful brio cables. 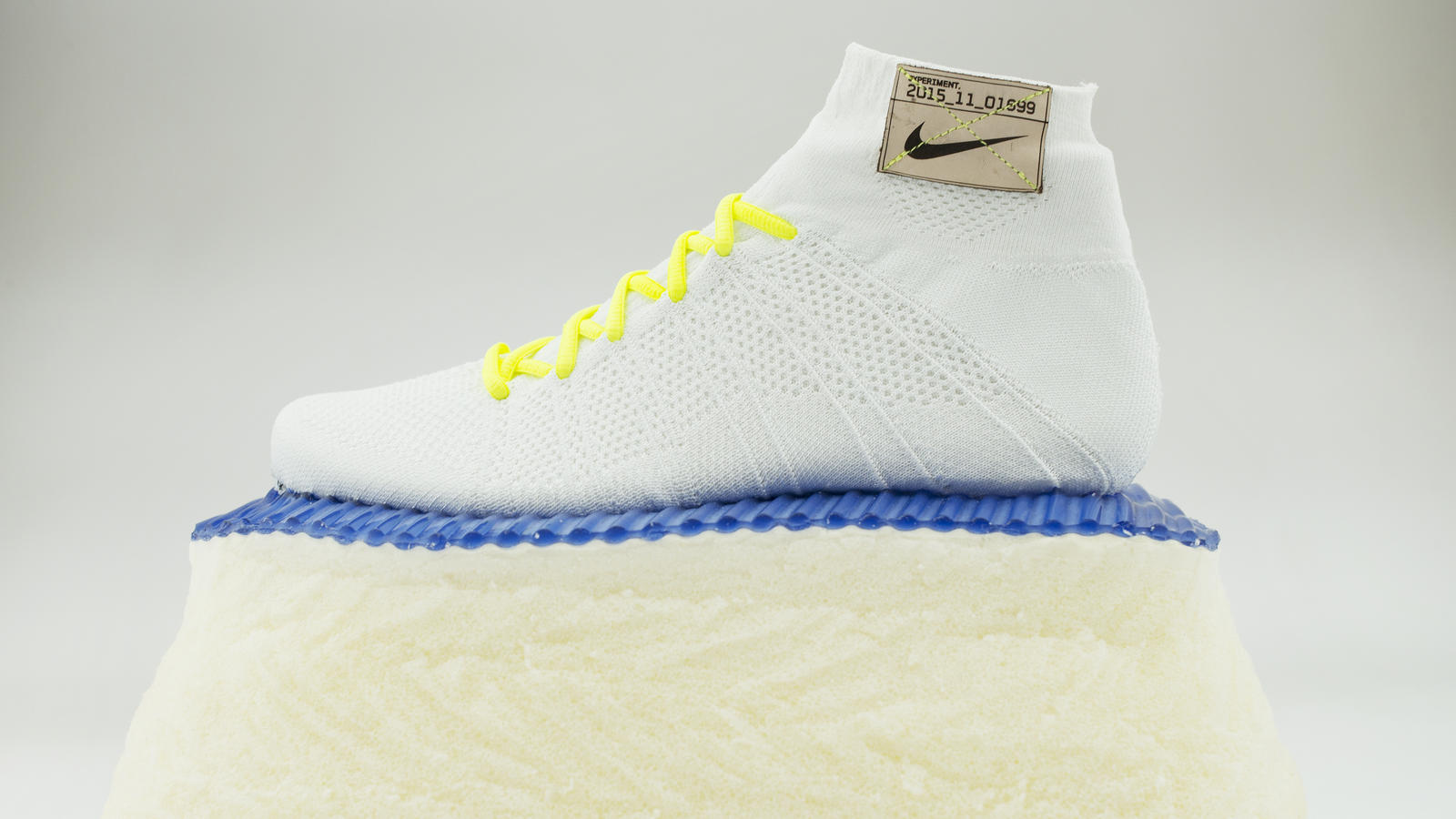 Advancing the notion of relief in performance footwear, this stratified design layers a midsole made of blue cooling gel over an outsole shaped from a memory foam pillow. Together, the tiers slow down compression to maximize malleable cushioning. 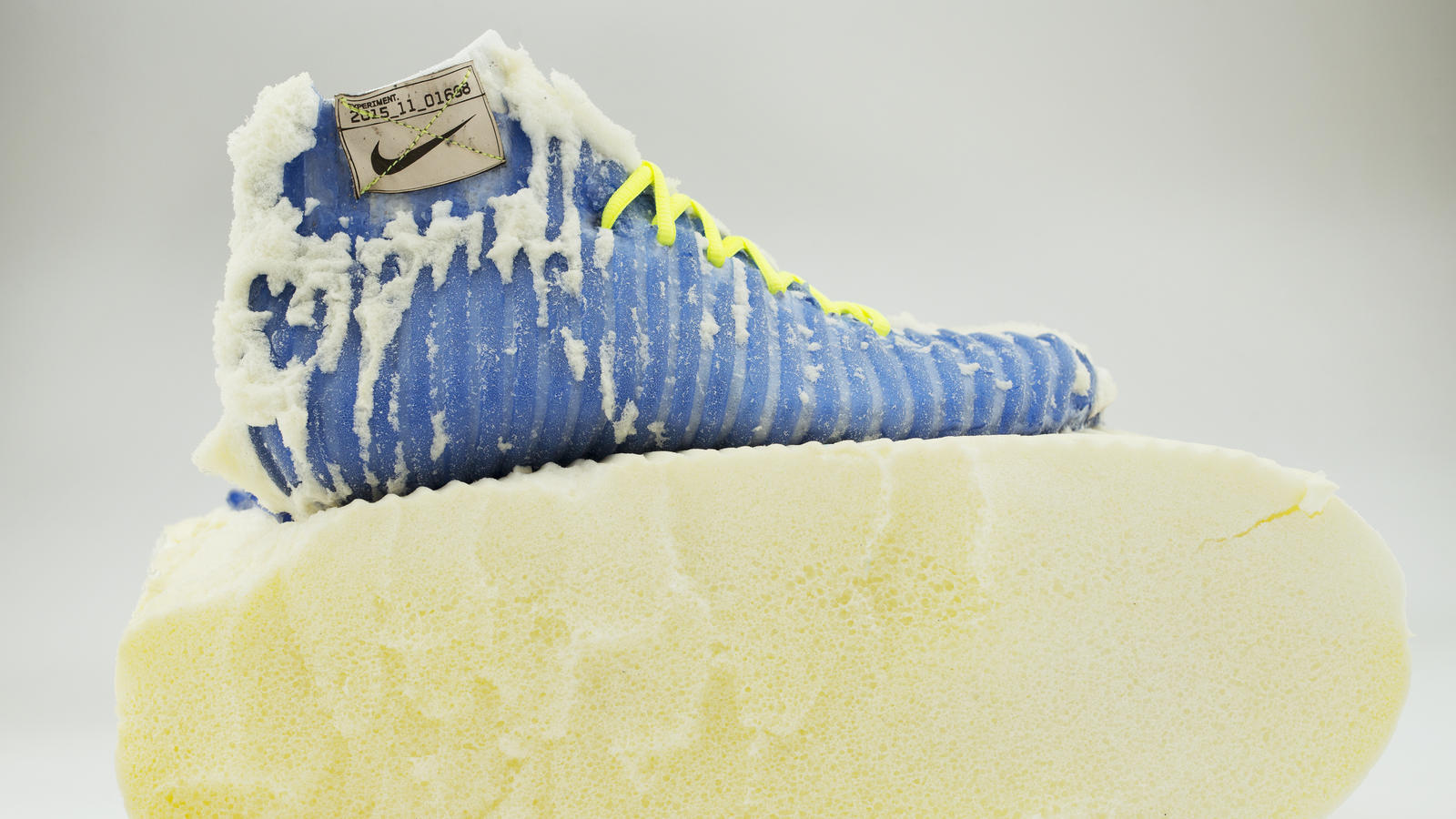 Advancing the notion of relief in performance footwear, this stratified design layers a midsole made of blue cooling gel over an outsole shaped from a memory foam pillow. Together, the tiers slowdown compression to maximize malleable cushioning. 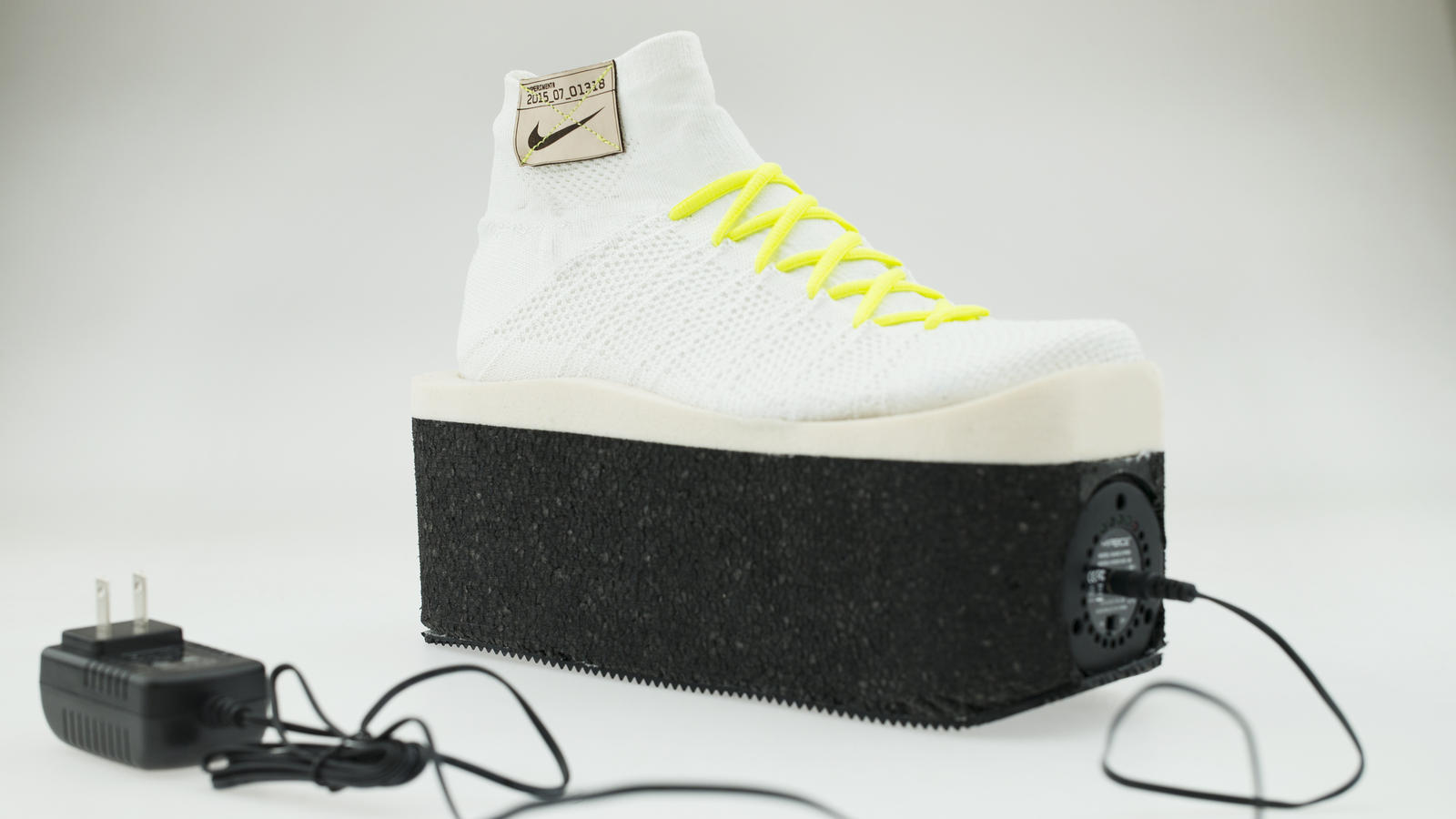 This platform design debuts a vibrating tooling system that evolves the concept of helping athletes recover while they run. 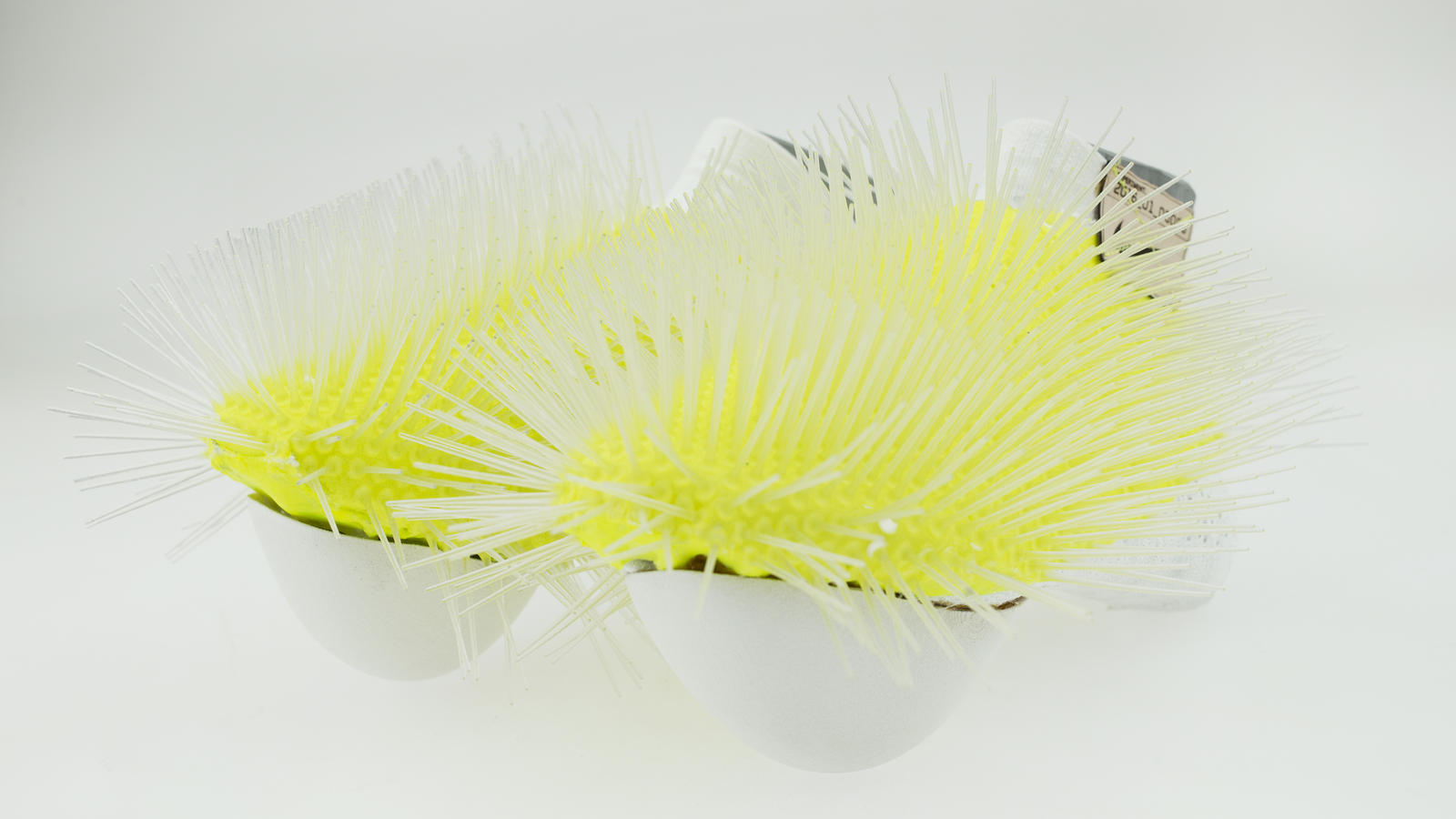 Drawing insight from the sensory navigation provided by a cat’s whiskers, this thorny experiment uses a 3D printer to embed synthetic “whiskers” into a flat Flyknit upper. Once the upper is constructed, the top-of-foot whiskers act as “sensors,” augmenting an athlete’s senses during a dusk run, while the underfoot whiskers encourage the athlete to run on his or her toes, playing with the concept of design-influenced form. 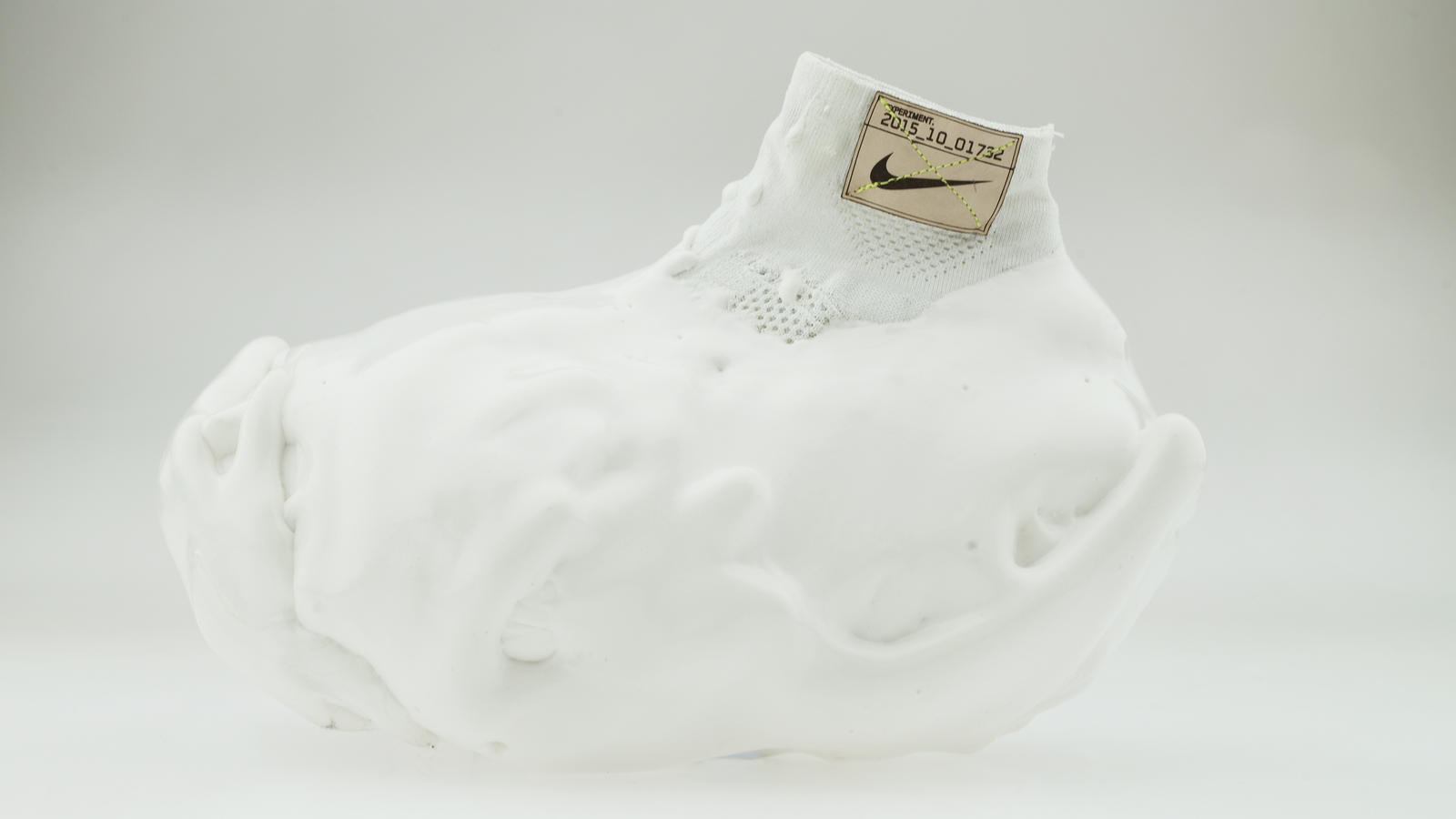 Driven by the idea of “limitless” cushioning and completely eliminating the sensation of surface impact, this amorphous design features multiple dipped layers of PU foam so that, regardless of the athletic action, it never hits a fully compressed state. 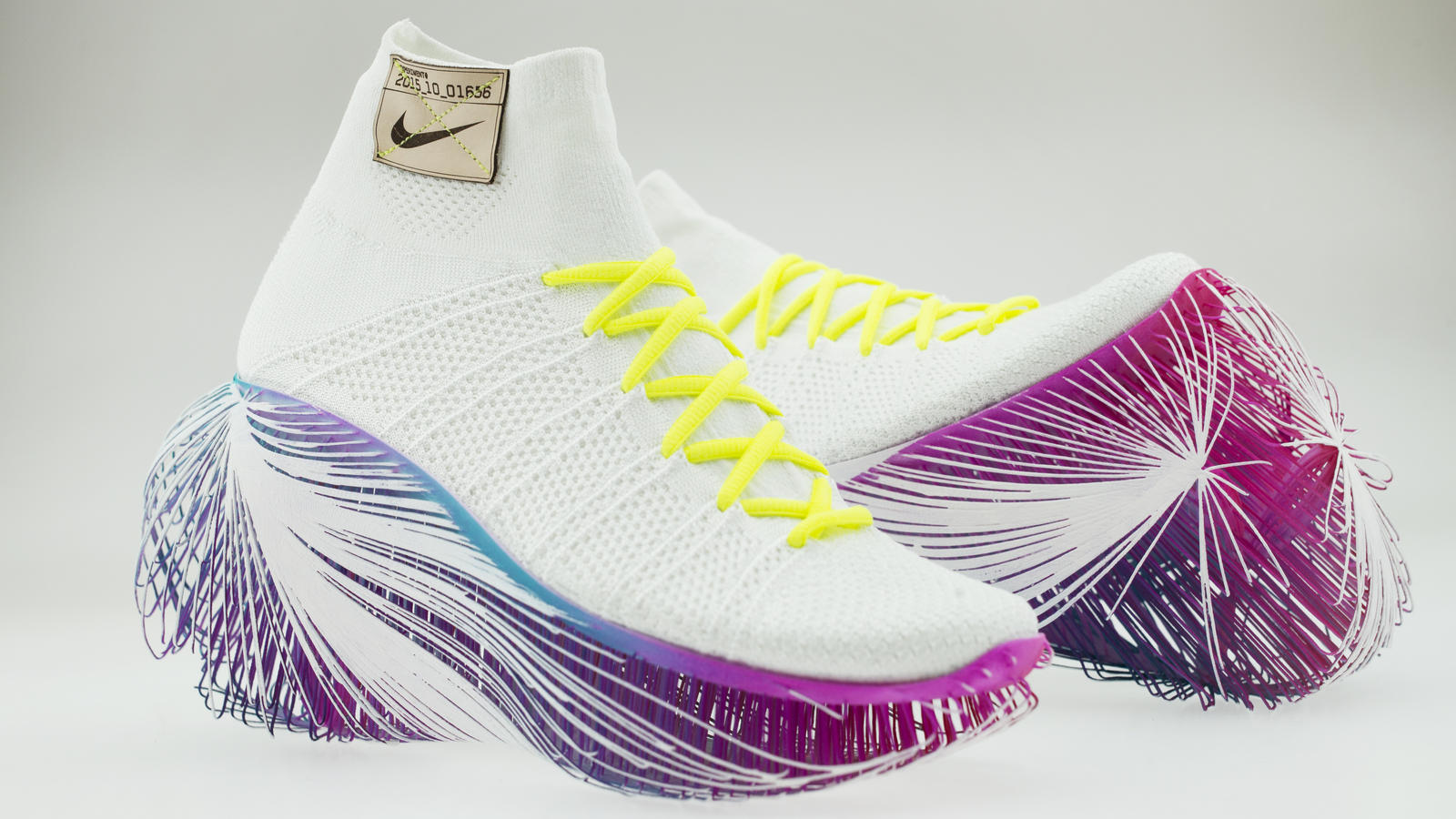 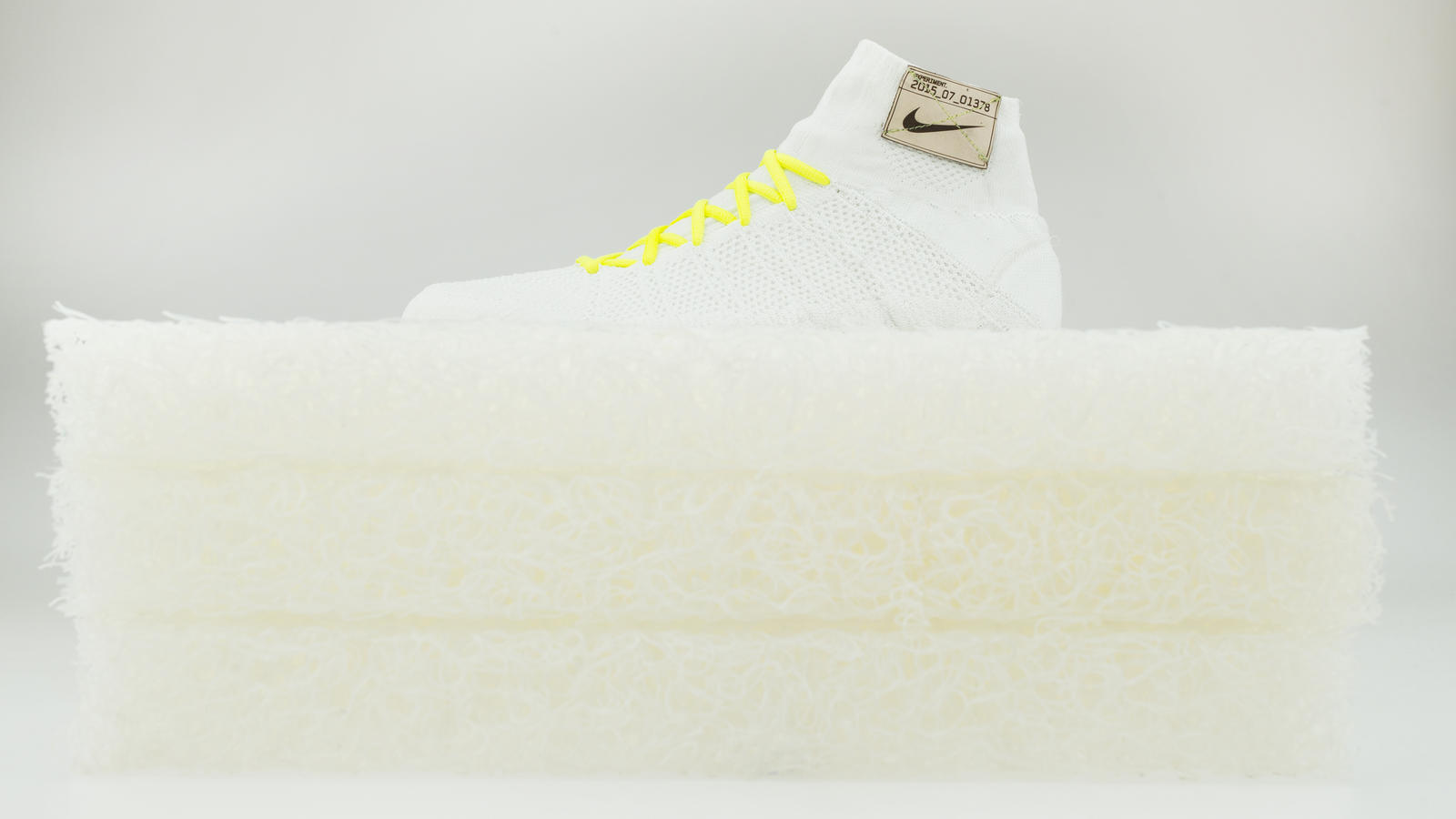 Disrupting perceptions of compression, this pre-loaded spring cushioning system — made from electro-spun polymer “noodles” — appears avant-garde on the shelf, but once an athlete steps down, it compresses to a normal height, creating springy response. 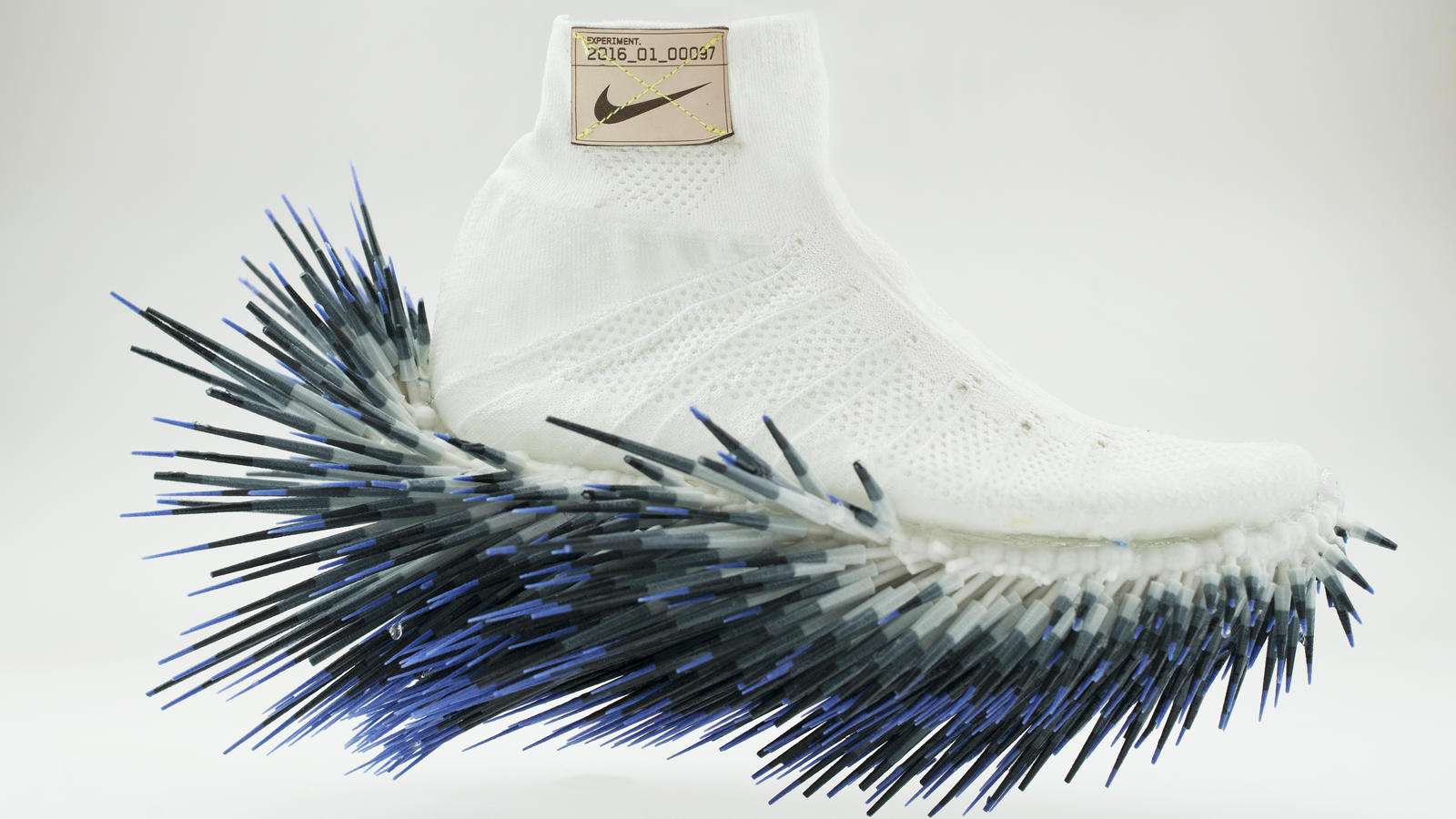 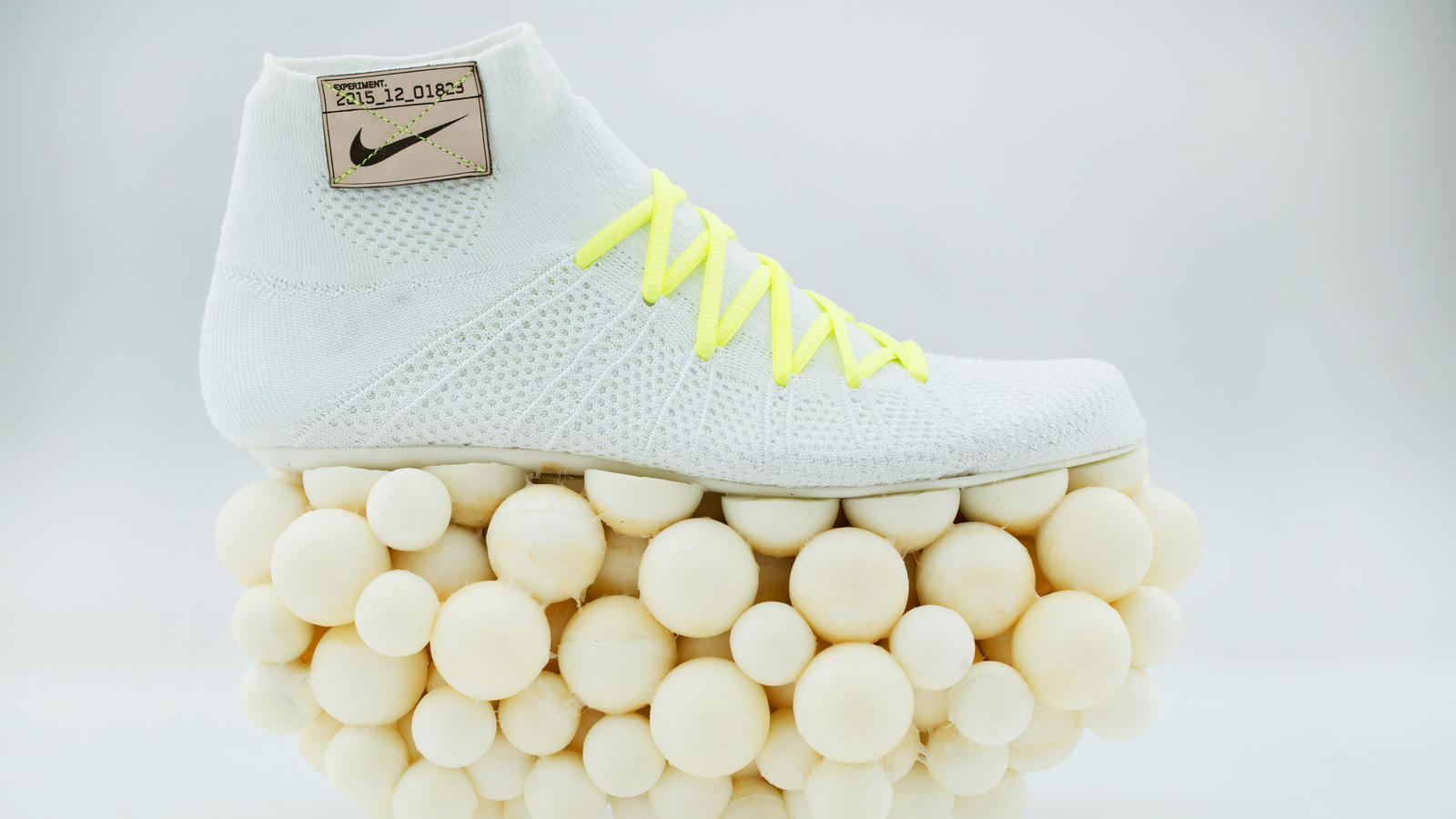 This composite design places two sizes of PU foam spheres underfoot. While each independently compresses to counteract impact, the group collectively reacts to form a cushioning system that amplifies energy return and encourages the wearer to embrace instability.