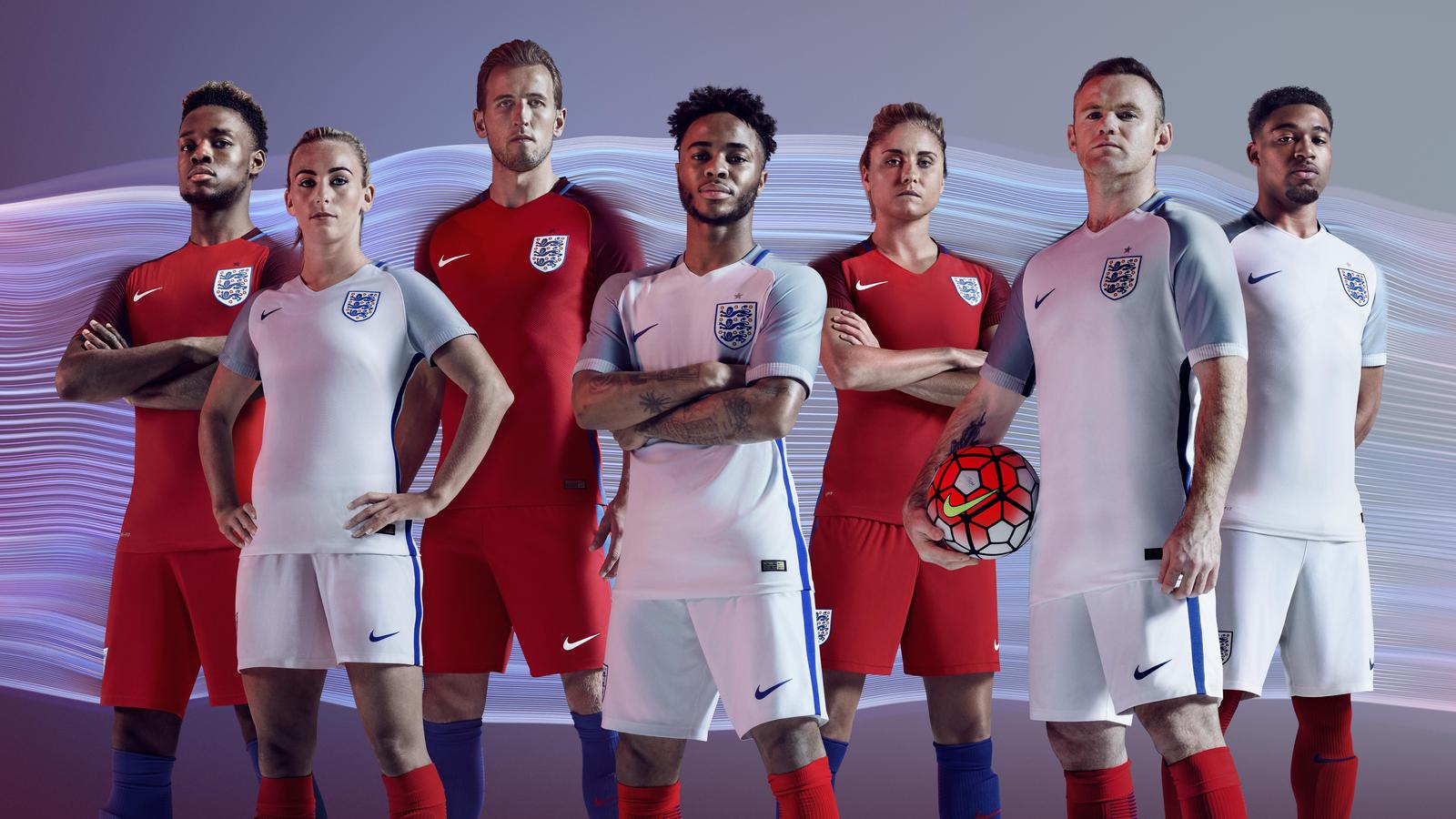 England unveils new 2016 home and away Nike Vapor kits with AeroSwift technology ahead of the European Championships, as athletes from the men’s, women’s and development squads come together to present a united front. The predominantly white and red themes of the respective kits blend symbols of England’s storied football history with cutting-edge Nike AeroSwift technology enables on-pitch focus by reducing distractions for England athletes such as Harry Kane and Raheem Sterling.

“It’s always an honor to put on an England shirt and this one makes you really feel fast,” says Sterling. “It feels light and fits nicely.”

The new home kit features a classic white English body with contrasting light blue shoulders and sleeves produced by cross-dyeing white with the blue used elsewhere in the kit. On the chest, engineered knit zones create a geometric pattern that enhances fit, with smaller mesh shapes at the bottom of the graphic. 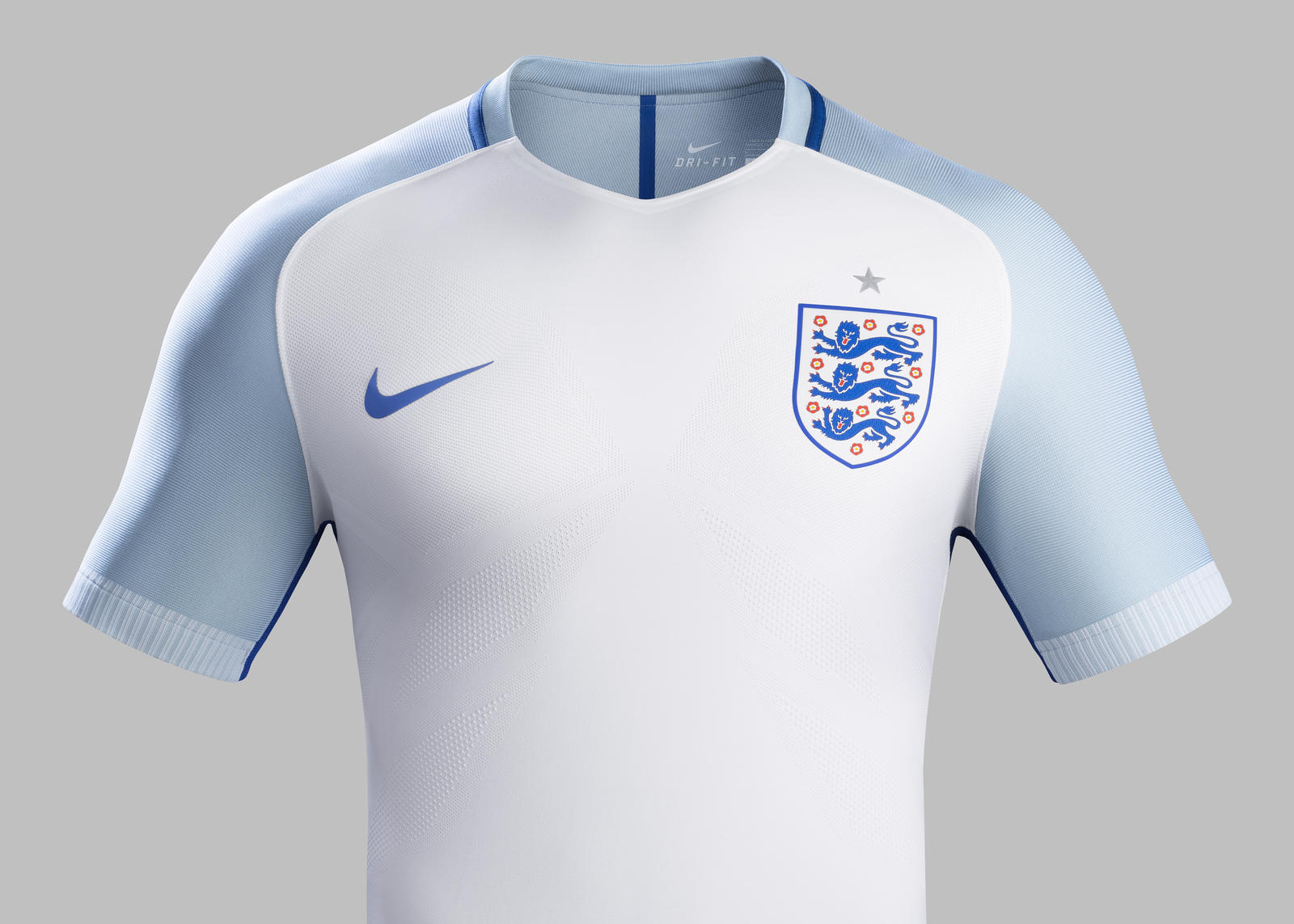 Odes to national pride appear on both the interior and exterior of the shirt. The high-density federation crest in flat and seamless silicon mesh sits on the chest, and “England” is knit into the back collar. “Three” and “Lions” adorn the inside cuffs while the reverse of the crest reveals a rose graphic, referencing the symbol that was embroidered onto early England caps in the 19th century. 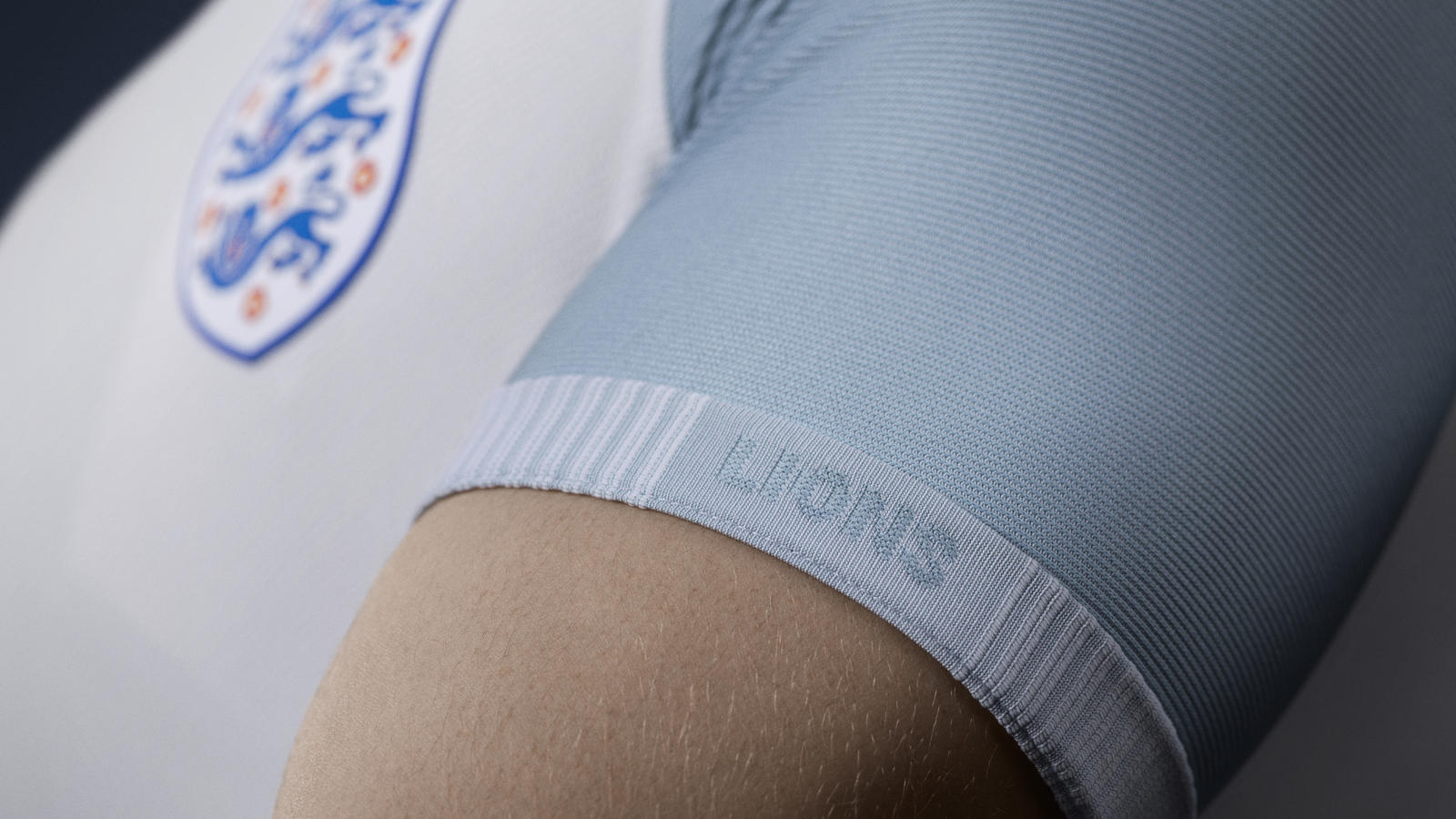 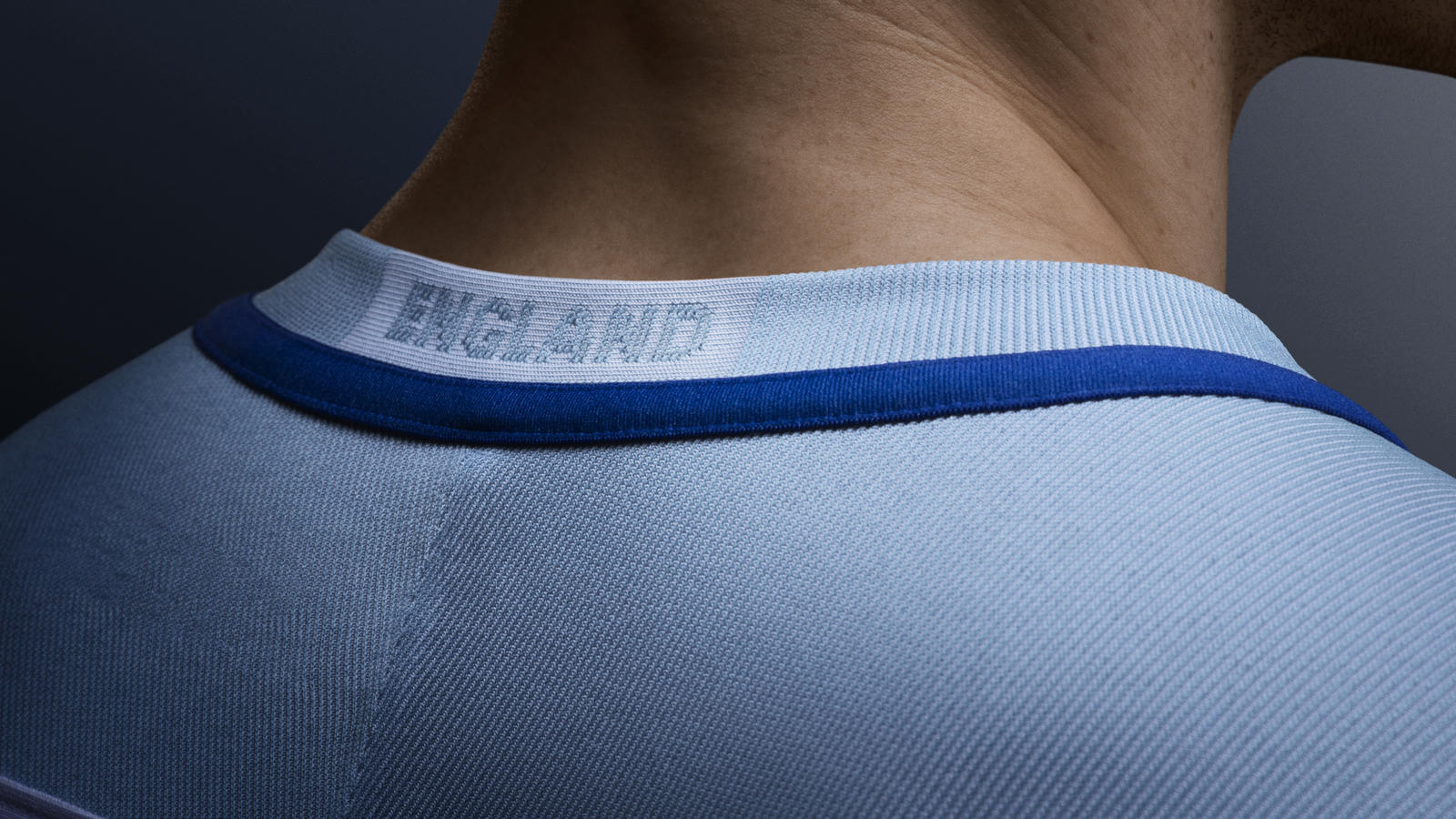 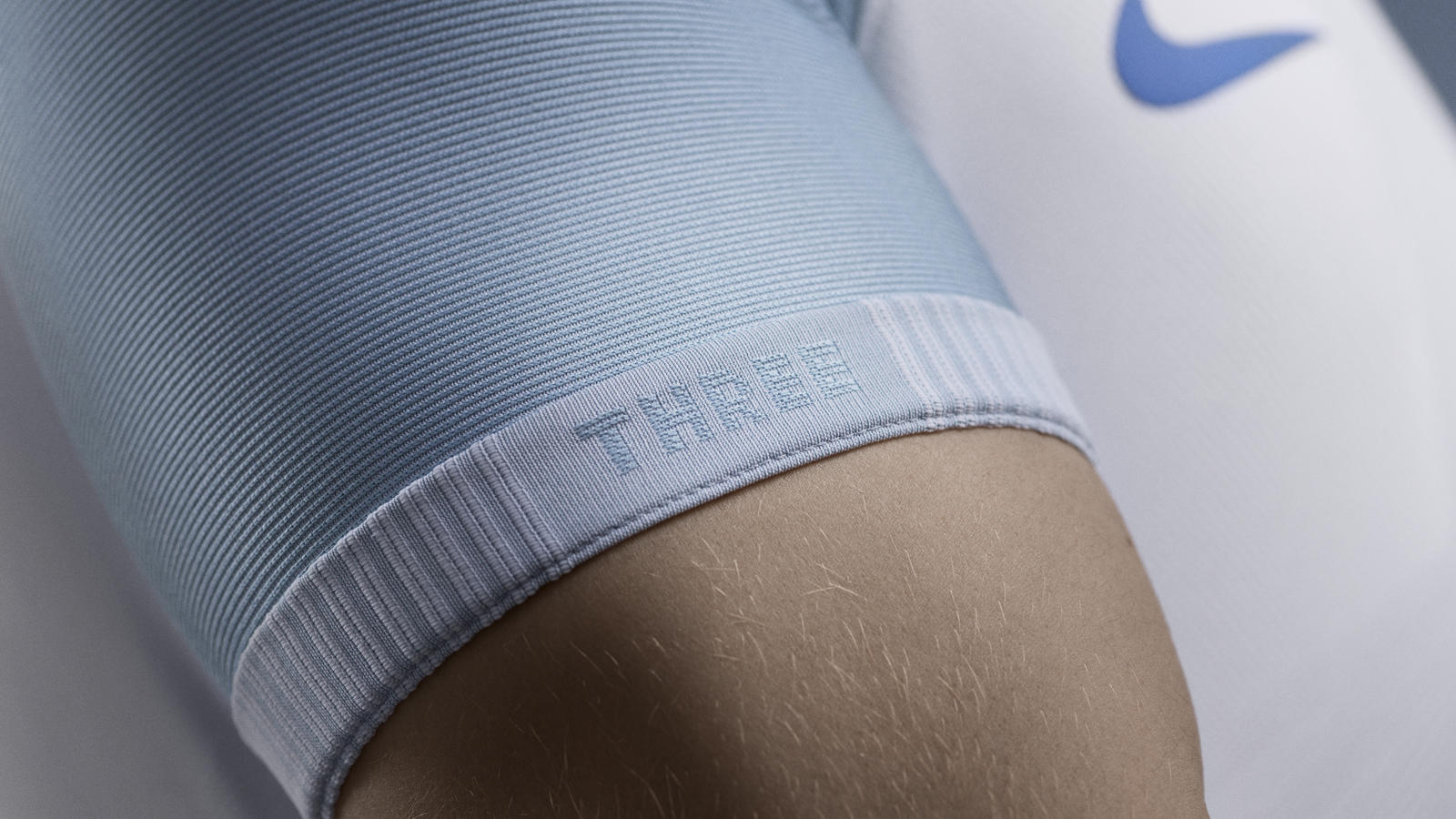 The sides of the kit have a blue stripe that runs the length of the shirt and matching shorts. Expanding when the player is in motion, it maximizes ventilation and reveals a subtle tone of underlying red. Bright red socks, featuring a linear blue graphic on the calf, celebrate the look of the English team that famously triumphed over Brasil at Maracanã Stadium in 1984. They bring a vibrant spark of contrast to the head-to-toe look and highlight the most dynamic part of the footballer’s body, the lower legs, to accentuate speed.

“For both kits, we set out with the goal of bringing together the colors that are synonymous with English football: white, red and blue," explains Martin Lotti, Nike Creative Director. "Flashes of contrast are used to illustrate innovative details, such as the cross-dyed knitted sleeves and the ventilation-enhancing stripe on the sides of the shirts and shorts.”

Honouring the 50th anniversary of England’s 1966 victory at Wembley, the team’s new away kit integrates the very same performance innovations and design details as the home kit, but in the team’s world champion-winning red.

“England has had great moments in red over the years – one in particular," says Lotti, "and our design team has risen to the challenge of integrating references to England’s footballing history with a futuristic system of performance apparel in both the home and away kits.” 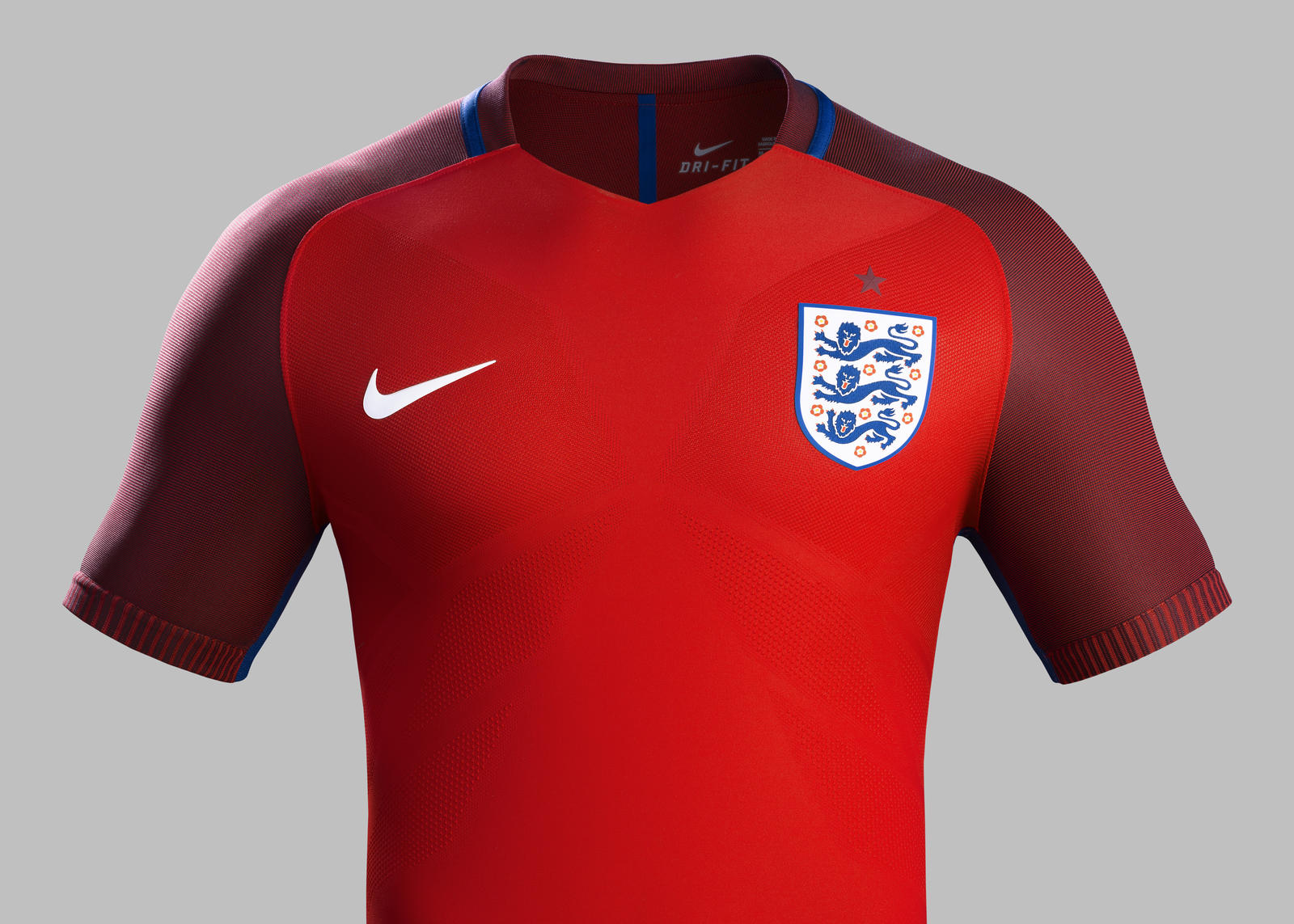 The shirt’s red body is offset by a textured purple effect across the shoulders and sleeves, achieved by cross-dyeing red with the blue used elsewhere in the kit. The new away socks are blue with a red linear graphic on the calf.

2016 England home and away kits will be available beginning March 24 at Nike.com and select retailers.

The most technologically advanced kits to date, Nike Vapor kits with AeroSwift technology are 10% lighter, with 50% more stretch than the kits they replace. They employ a new, textured high-performance yarn that wicks sweat from the skin 20% faster than Nike’s most recent football kits, while also drying 25% faster. Additionally, both the shirt and shorts are constructed using a new knitting process that integrates single and double knit to enhance breathability, stretch and fit.