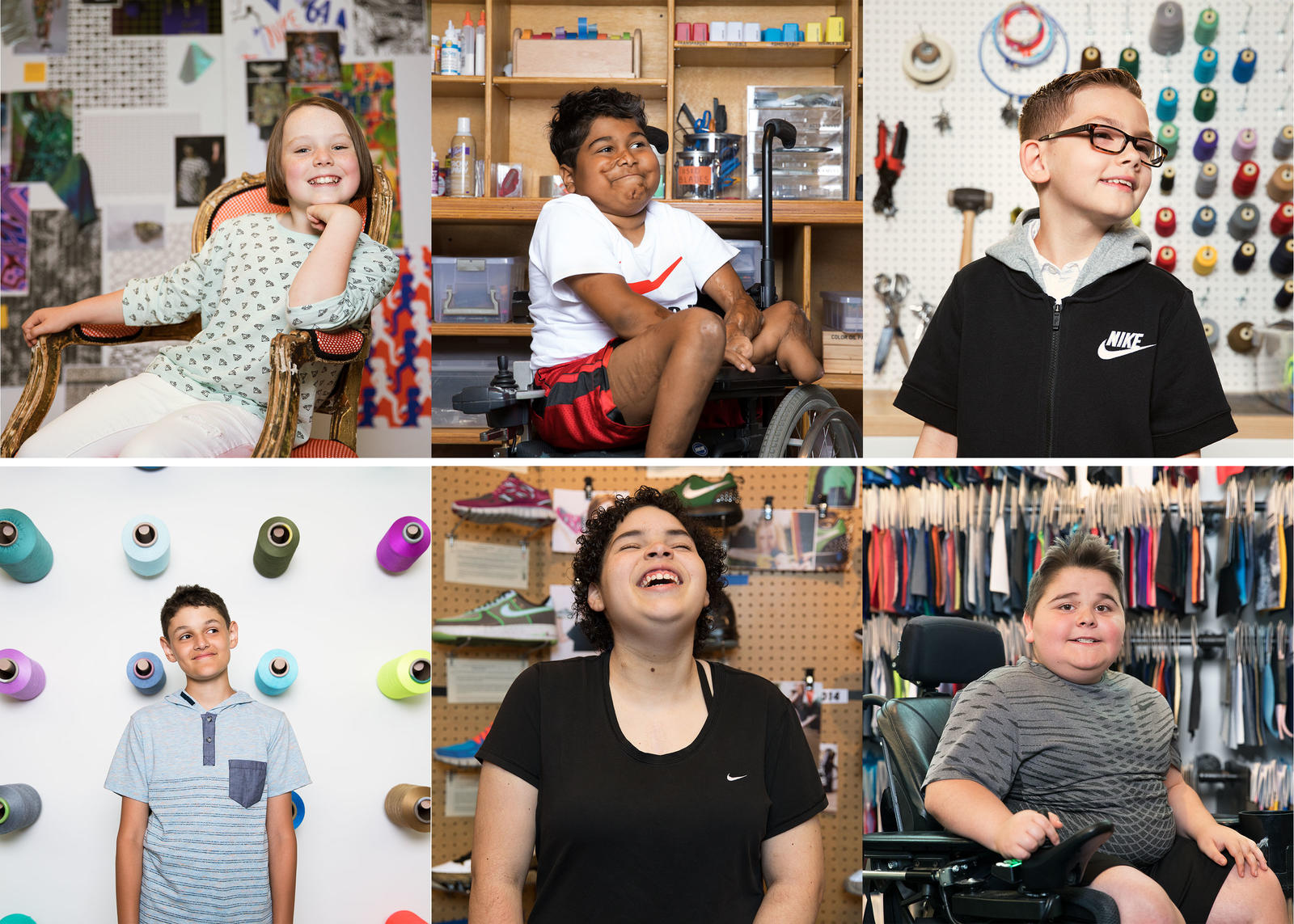 Chloe Swientek, 10 years old, stands in the middle of a white studio backdrop in Beaverton, Oregon. The cystic fibrosis patient is instructed by Nike designers and staff from Portland’s OHSU Doernbecher Children’s Hospital to reach out both hands and to close her eyes. Around the corner, a Nike designer walks out, holding a special pair of shoes: a purple and blue Nike Air Force 1, designed by Chloe herself as part of the Doernbecher Freestyle program. The designer gently sets the shoes in Chloe’s hands. This photo shoot is the first time Chloe and the five other young Doernbecher patients will get to see shoes that they designed. She squeezes her eyes shut, freckles dotted across her face. She can barely keep back a giant smile.

15 years ago, former Nike creative director Michael Doherty followed through on a vision from his son, Connor: what if Doernbecher patients could design their own Nike shoes, working alongside Nike designers and developer teams, and then donate the proceeds to the hospital?

The evolution of that idea – what is now Doernbecher Freestyle, wherein each year, six hospital patients design a Nike silhouette and apparel – has raised nearly $20 million for Doernbecher, contributing to new treatments and better care for kids by advancing medical research and supporting the work of pediatric specialists. It's also earned a devoted following in the sneaker community.

The biggest impact of Freestyle, though, can’t be measured in dollar signs or by a stethoscope: it brings back hope for the kids, and instills a sense of creative control when agency over their own lives can feel lost.

“In some ways, I think a program like Freestyle can be more powerful to the healing process than medicine itself,” says Dana Braner, M.D., chair and professor of pediatrics, and physician-in-chief at OHSU Doernbecher. “Nike’s ability to rally excitement and support for our kids and their families creates a sense of hope and community that can be more important to a young child than any number of doctors or nurses. Doernbecher Freestyle is a result of a ton of good forces coming together at the right time and place for these kids.”

“In some ways, I think a program like Freestyle can be more powerful to the healing process than medicine itself. Nike’s ability to rally excitement and support for our kids and their families creates a sense of hope and community that can be more important to a young child than any number of doctors or nurses. Doernbecher Freestyle is a result of a ton of good forces coming together at the right time and place for these kids.”

Doernbecher enables kids to drive the shoe design process from beginning to end. The entire shoe is an open canvas. Back at the shoe unveiling, 11-year-old Donovon Dinneen, who, at the age of 2, underwent a quadruple amputation due to a rare meningococcal infection, smiles as he talks about his shoe’s sockliner, which included golden dragons inspired by anime. No detail is inconsequential.

Those details run the creative spectrum. Sometimes, the details are inspired by hobbies, sports teams, animals – even chicken, as is the case for 12-year-old Joey Bates and his SB Dunk Pro Low. They might be inspired by the perfect day. For 12-year-old Payton Fentress, that's playing baseball.

Other times, important figures in the kids' lives are the inspiration. Nine-year-old Aiden Barber’s camo Air Max 270 was designed with his cousin Michael in mind, who served overseas in the military and whom Aiden considers a personal hero.

At its core, Freestyle is a form of care for the whole patient; for kids, this care includes the imagination, a creative empowerment that can wear down after months of medical appointments, procedures and treatments.

The experience has a lasting impact on the kids, as some aspire to emulate the adults in Freestyle who guided them, wanting to land jobs one day as Nike designers, doctors, nurses or Child Life specialists.

“I can help kids who feel like they are the only ones who have gone through this,” says 16-year-old Kirsten Brown, who is recovering from a stroke and a heart transplant. “I can be a source of hope for them.”

Once hope enters in, a narrative of setbacks can be rewritten, and a child can view his or her condition as a strength instead of a weakness.

Chloe’s mother Erin remembers picking her up from school one afternoon in 2017. Chloe was in another cycle of medical treatments, and her mother asked her how she was holding up. She was taken aback by her daughter’s answer: “I’m so happy with my life right now,” Chloe told her. “I’m proud to have cystic fibrosis, and that’s because of Doernbecher.”

“One thing is always true: no one wants to be in a children’s hospital,” says Braner. "If we can help these kids through an adverse time and make it the best possible experience for them, then we’re doing what we’re supposed to be doing. That’s our job. Nike is right there every step of the way helping us do that. And it’s not just Freestyle. Nike does a tremendous amount for the hospital outside of Freestyle, asking us, ‘How can we do more? How can we do a better job for the kids that you serve?' That’s the kind of partner that you hold onto and you never let go.” 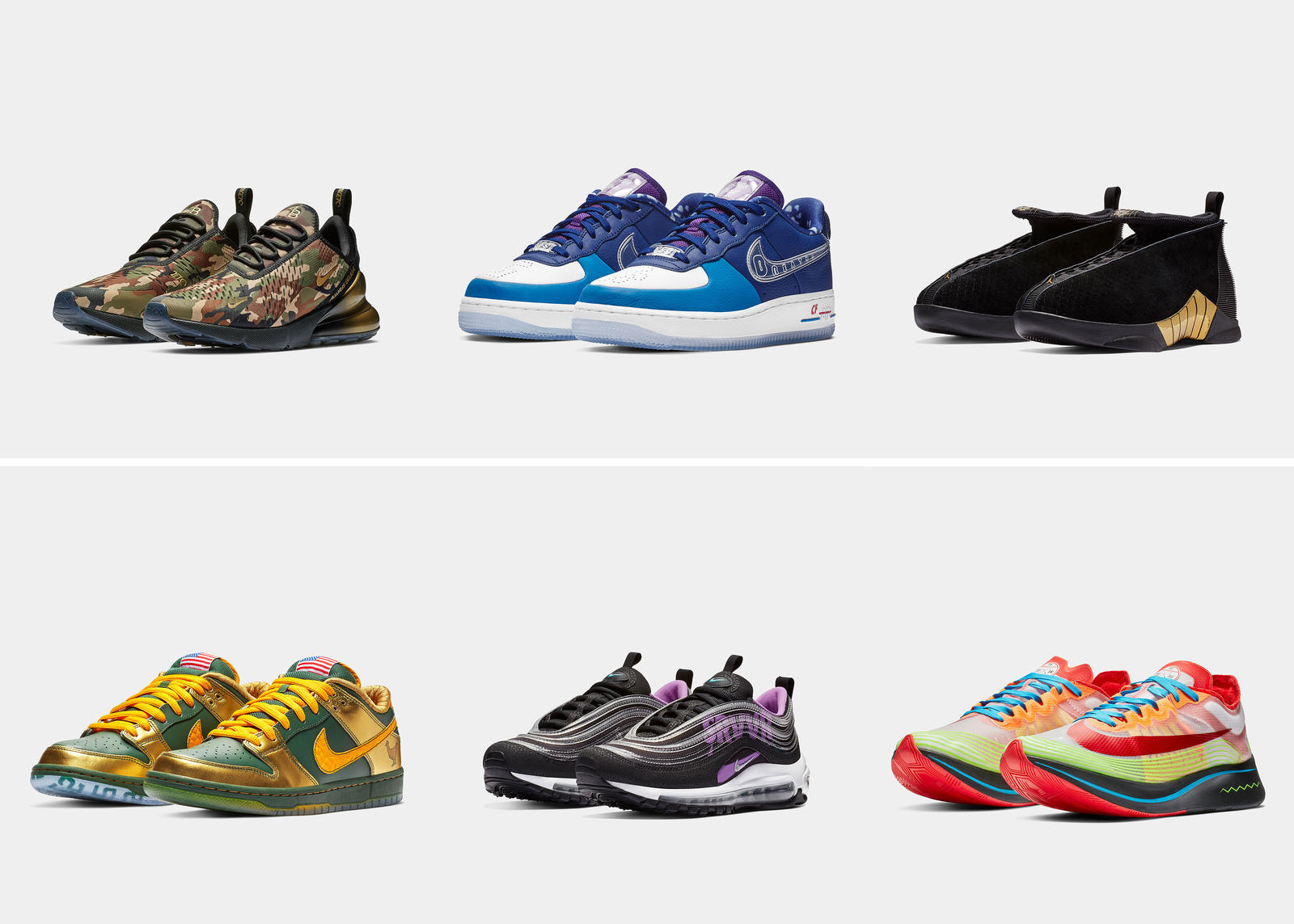 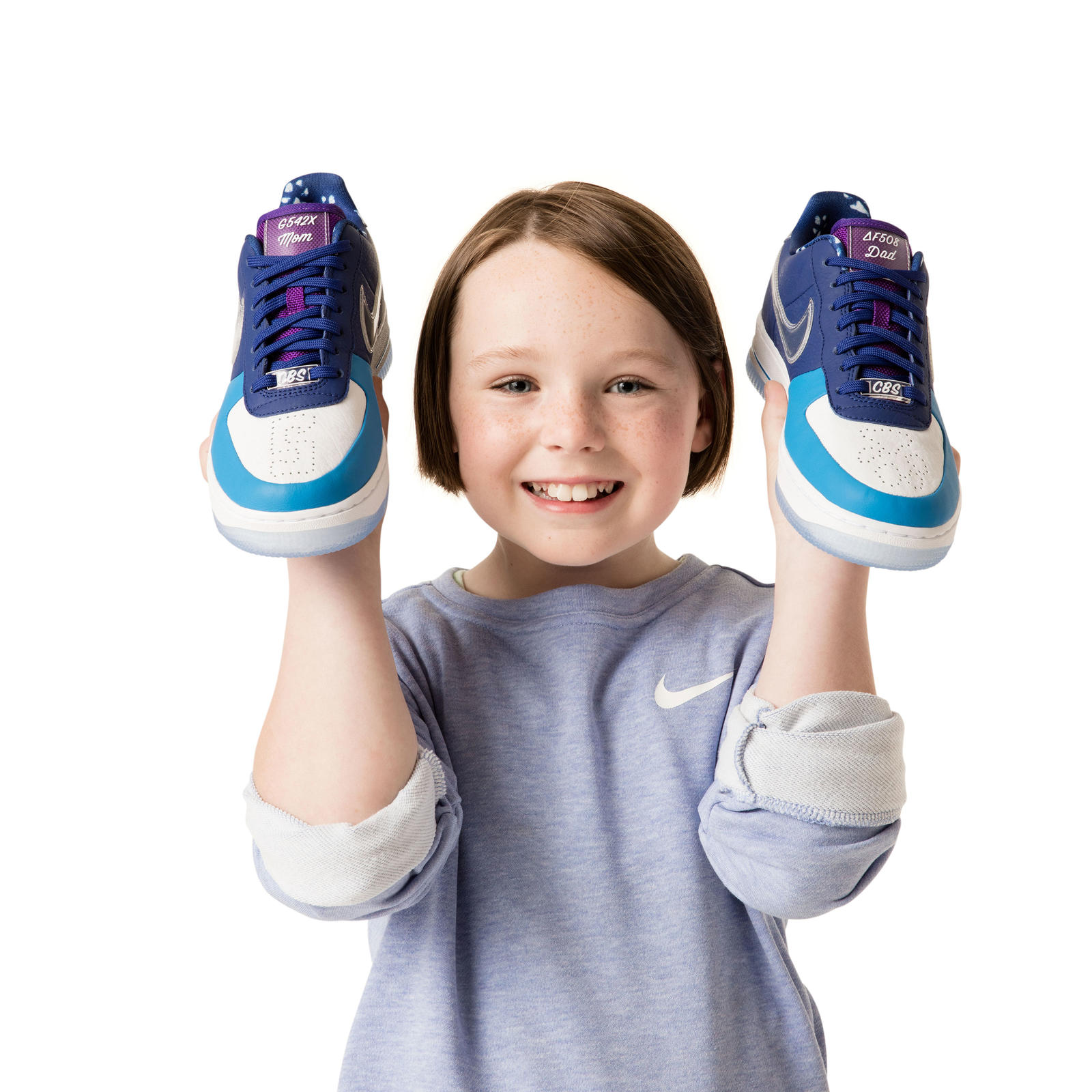 Chloe's determined to not let her cystic fibrosis keep her down. Her Nike Air Force 1 Low features "Cure" on the right cupsole and "CF" on the left. 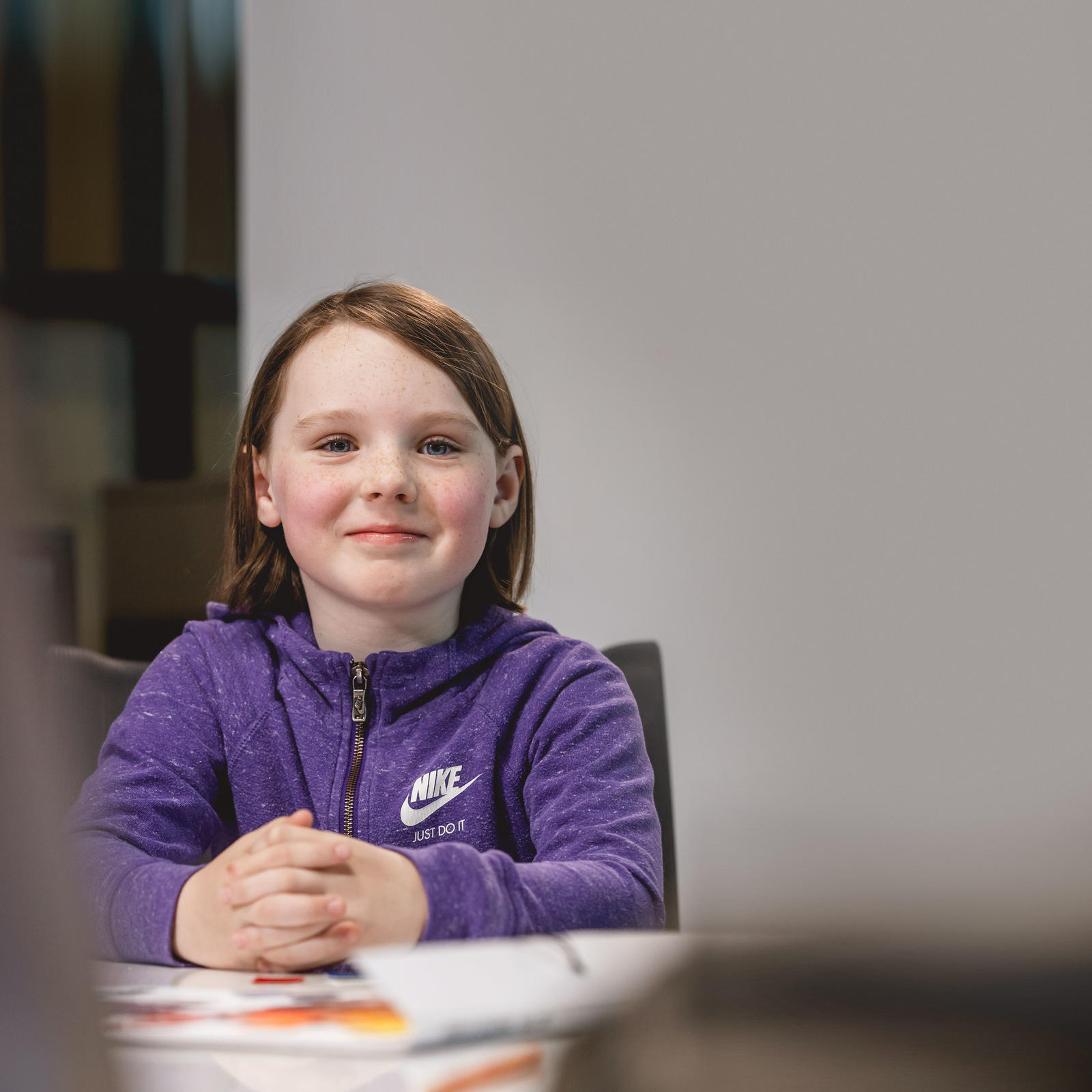 "Seeing all the prototypes was really fun," says Chloe about the design process. "We did a few versions before we landed on the perfect one." 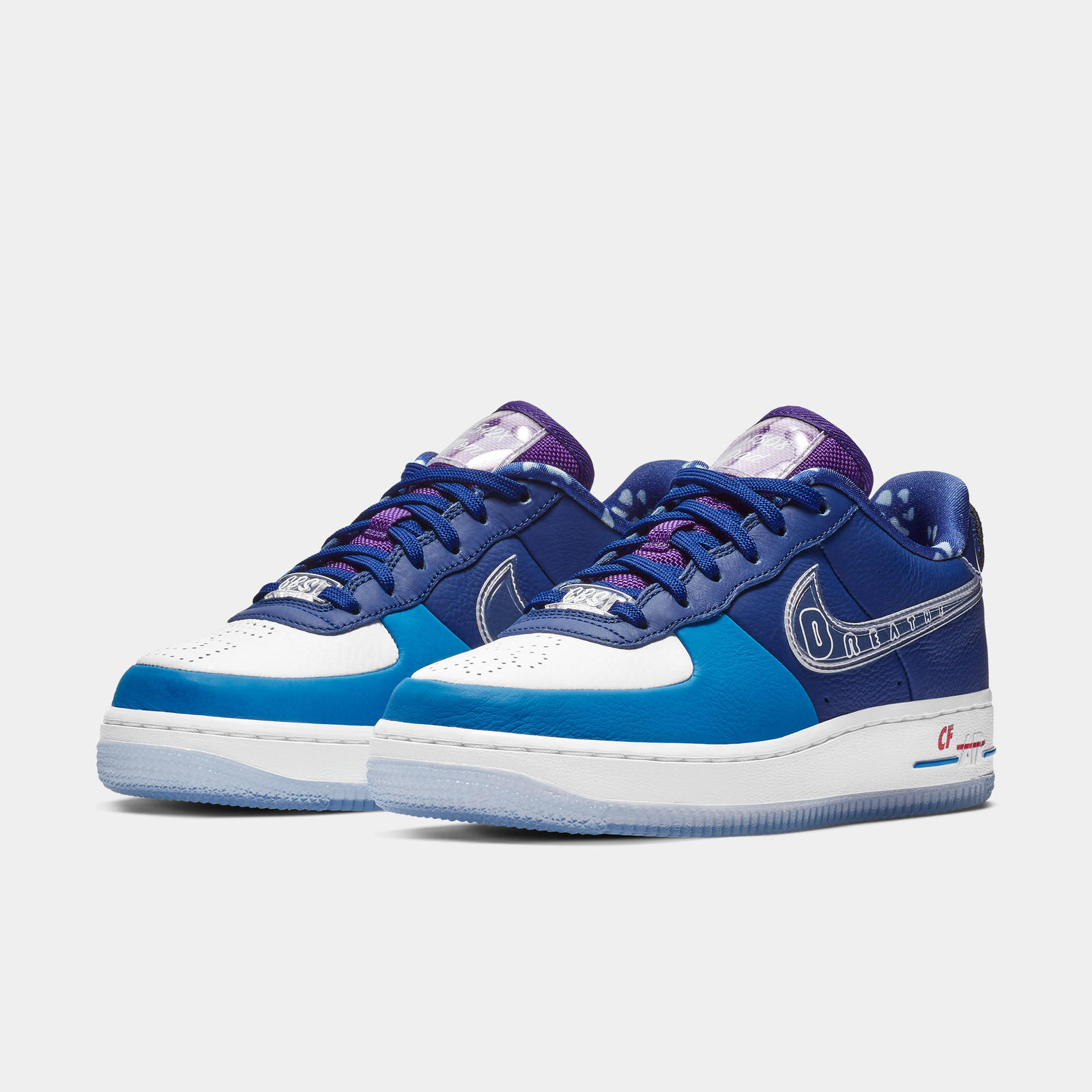 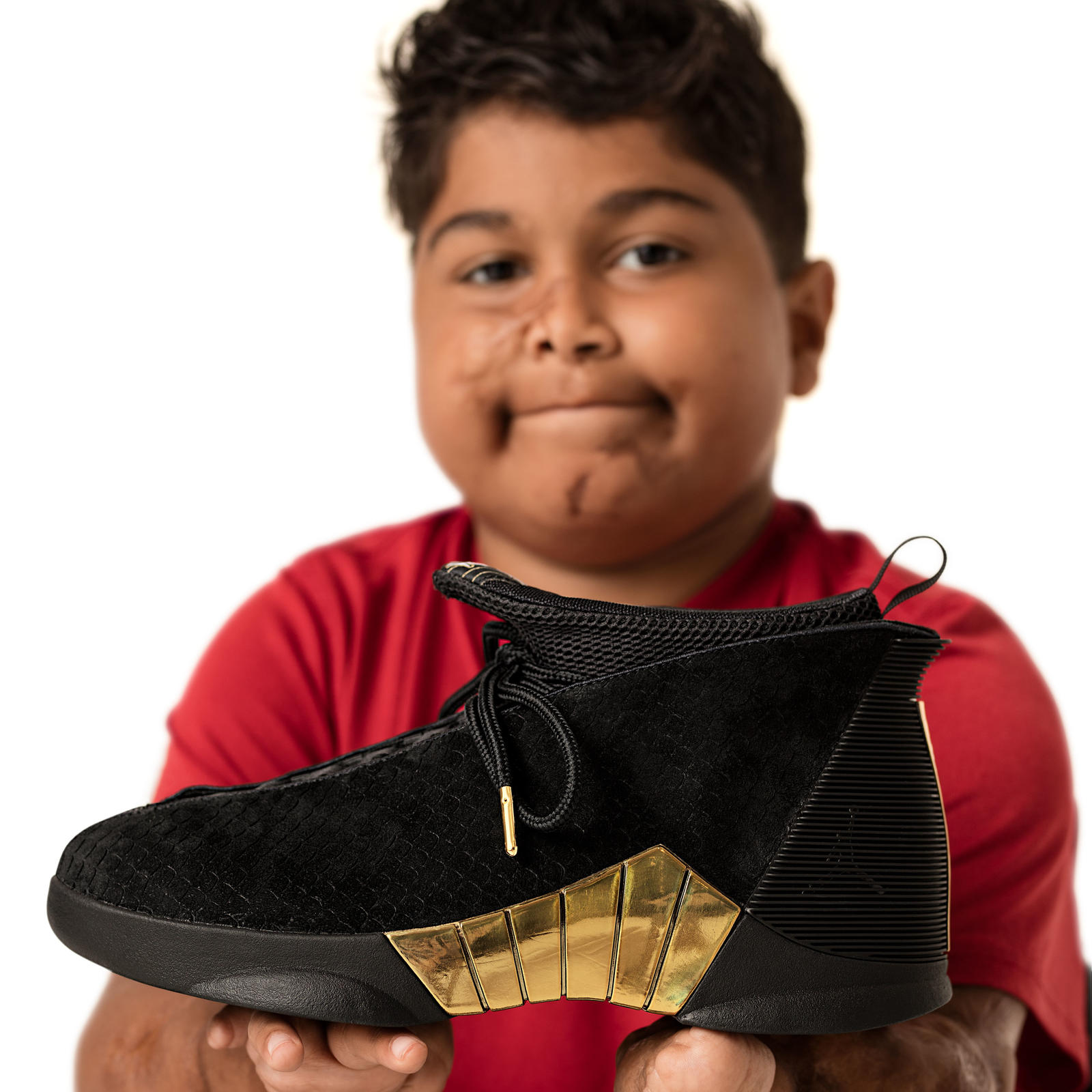 The upper of Donovon's Air Jordan XV is made of black suede and embossed with a dragon-scale pattern, inspired by anime. 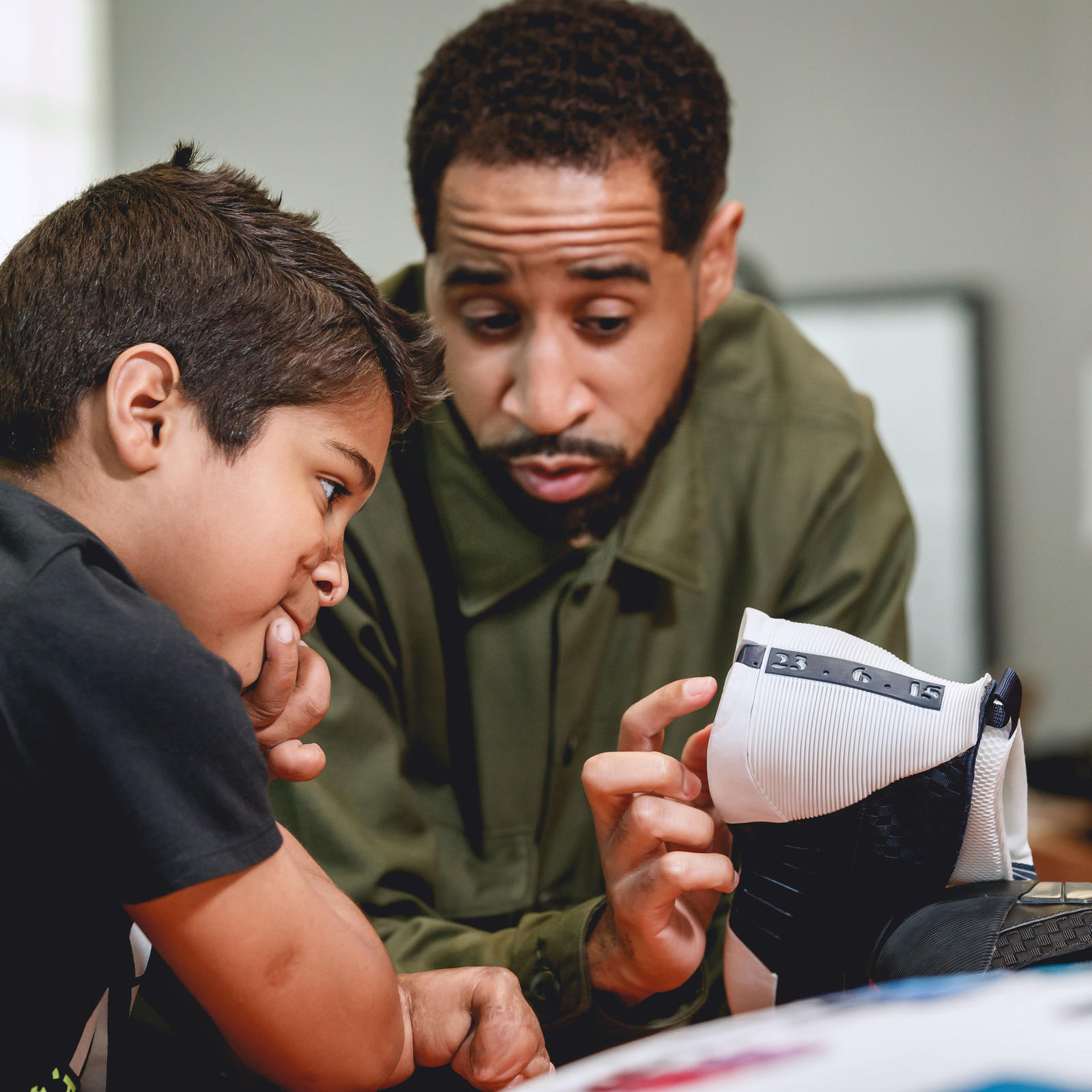 Donovon worked with Nike designers to find creative ways to put details about his family on the shoe. "I enjoyed all of the creating," he says. "My team had really good ideas." 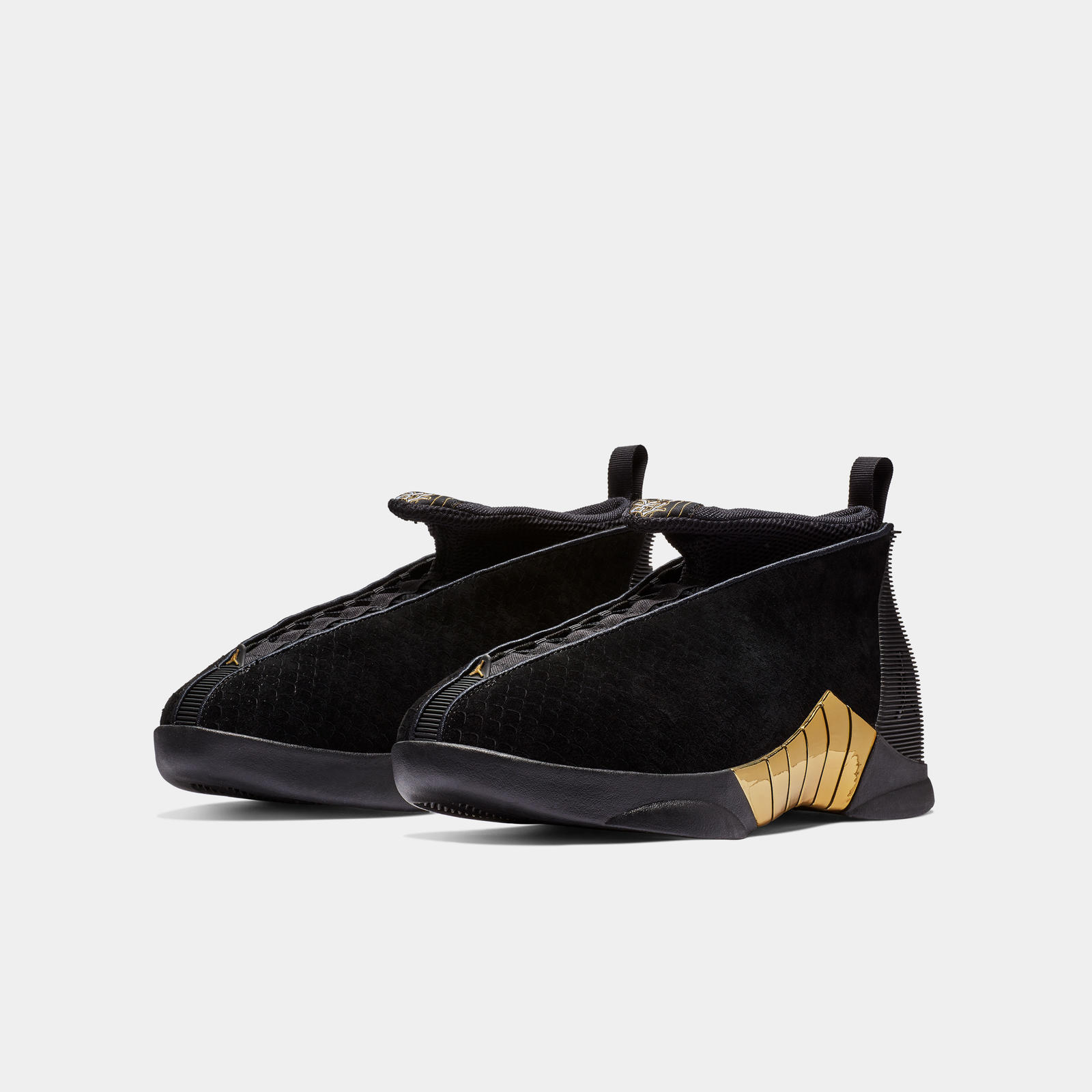 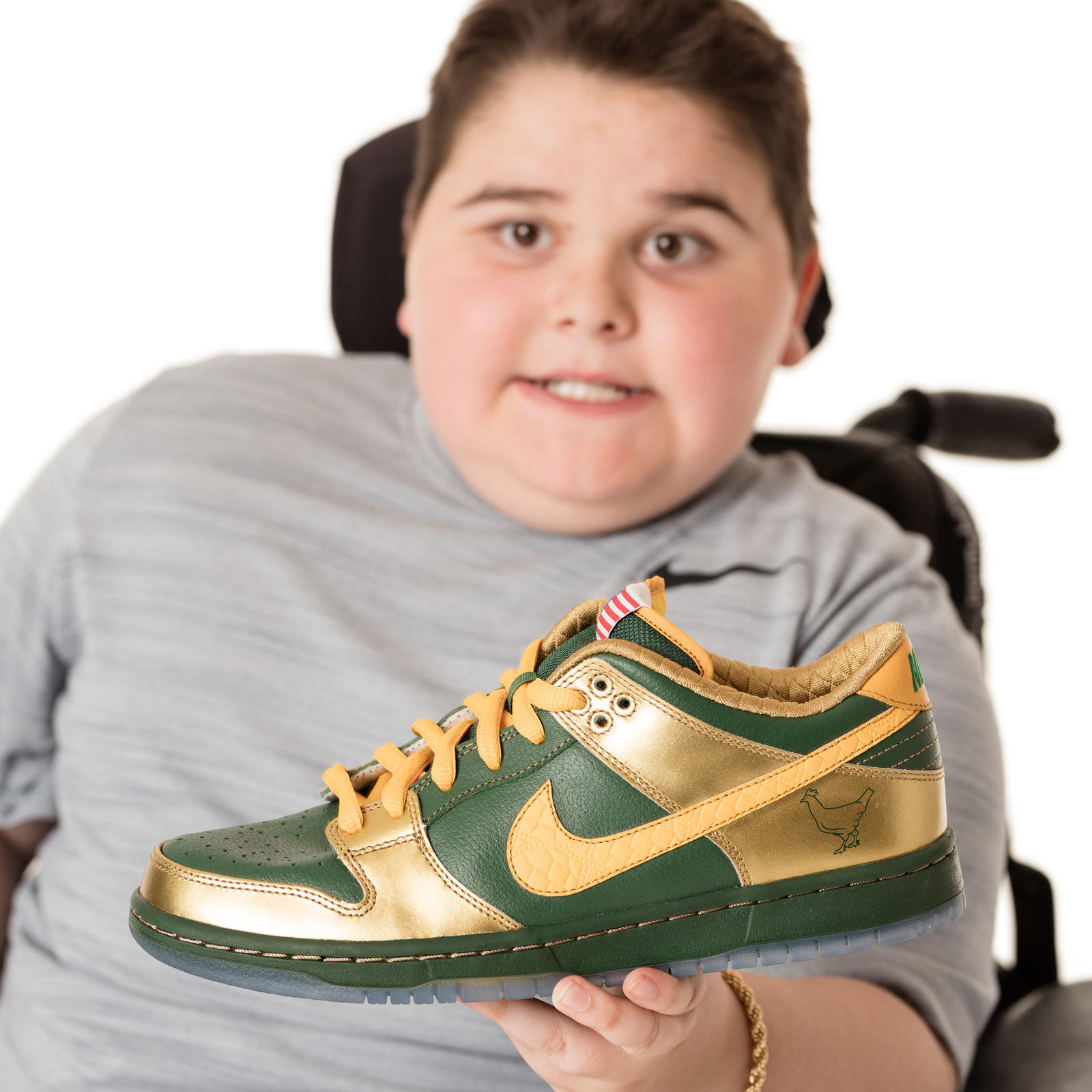 Joey favorite animal is the chicken, if you can't tell. But there's another detail that's inspired by Joey's prized possession: a turtle figurine from Hawaii. The Swoosh is embossed with a faux turtle-shell pattern. 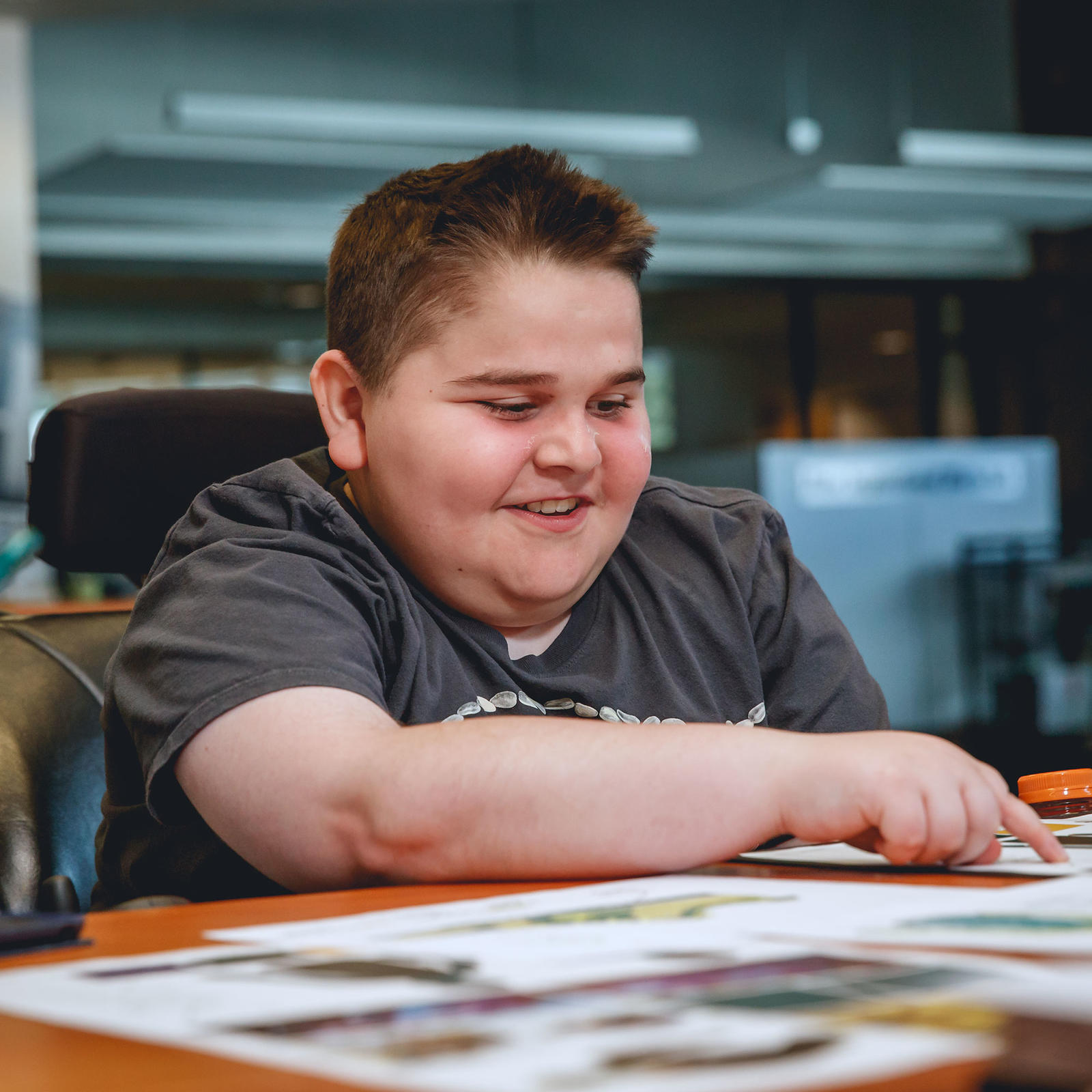 During the design brainstorming, Joey immediately knew the color scheme he wanted: green and gold, for his favorite professional football team. 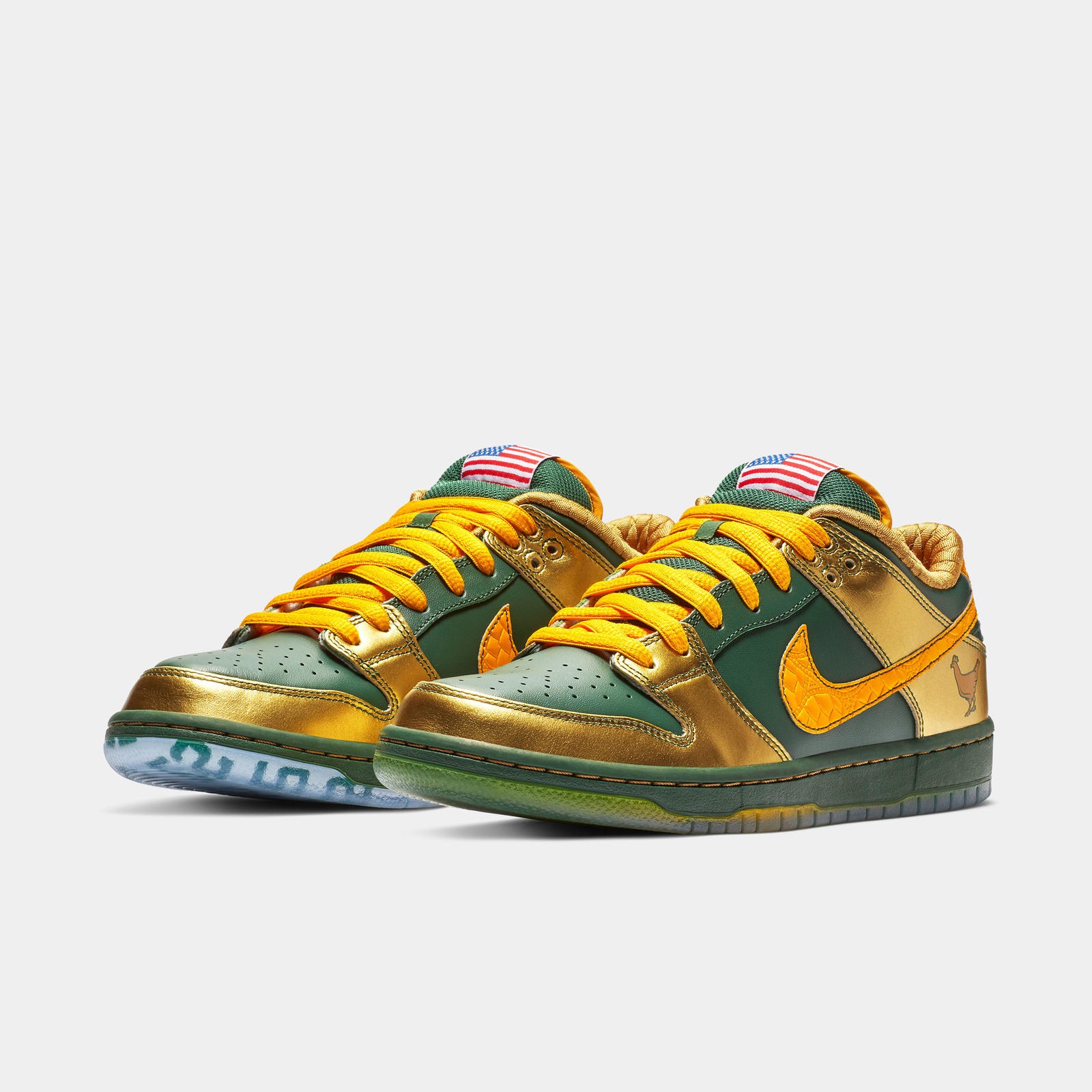 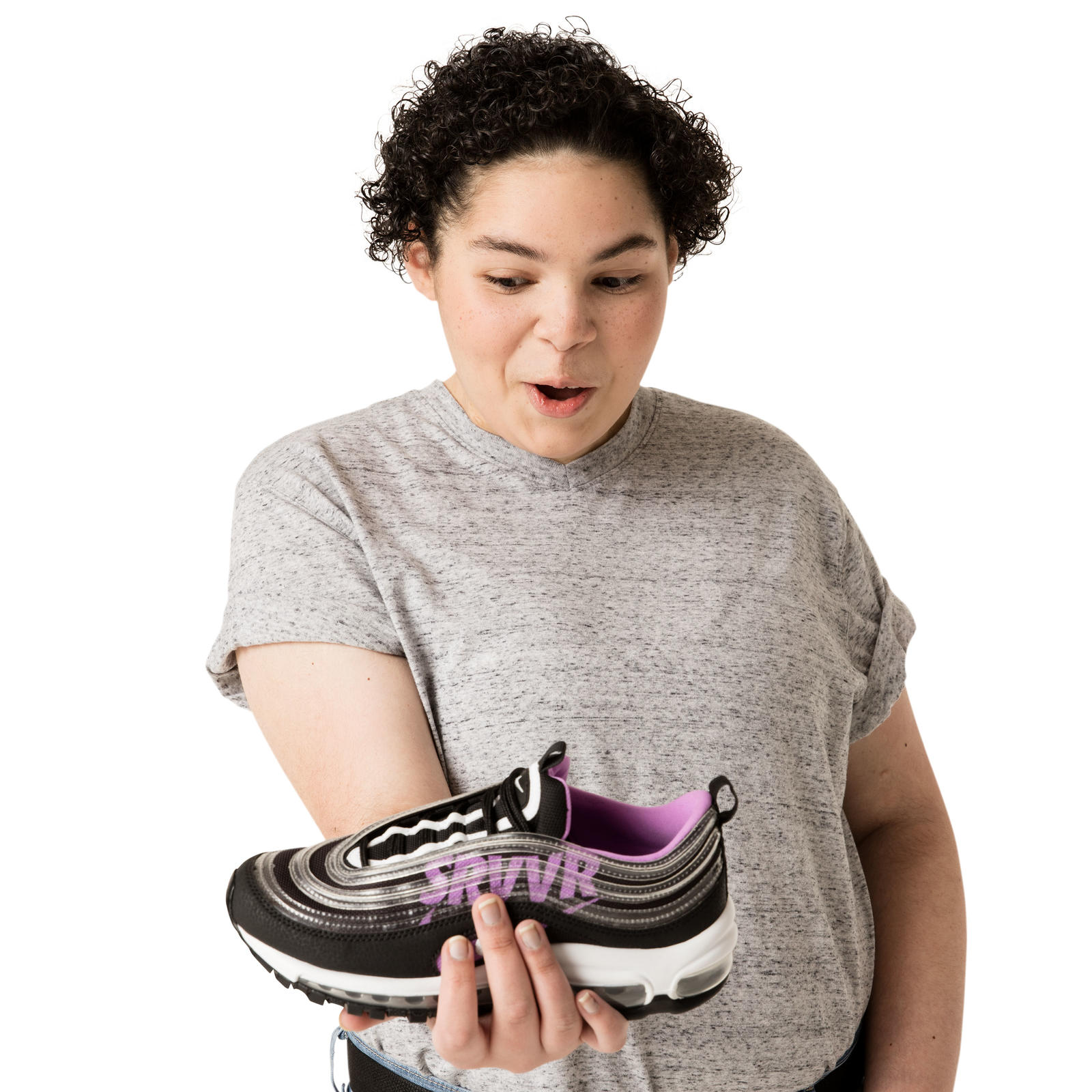 The date of Kirsten's heart transplant (5-18-16) appears on her shoe, as does a big, bold SRVVR graphic on the lateral side. 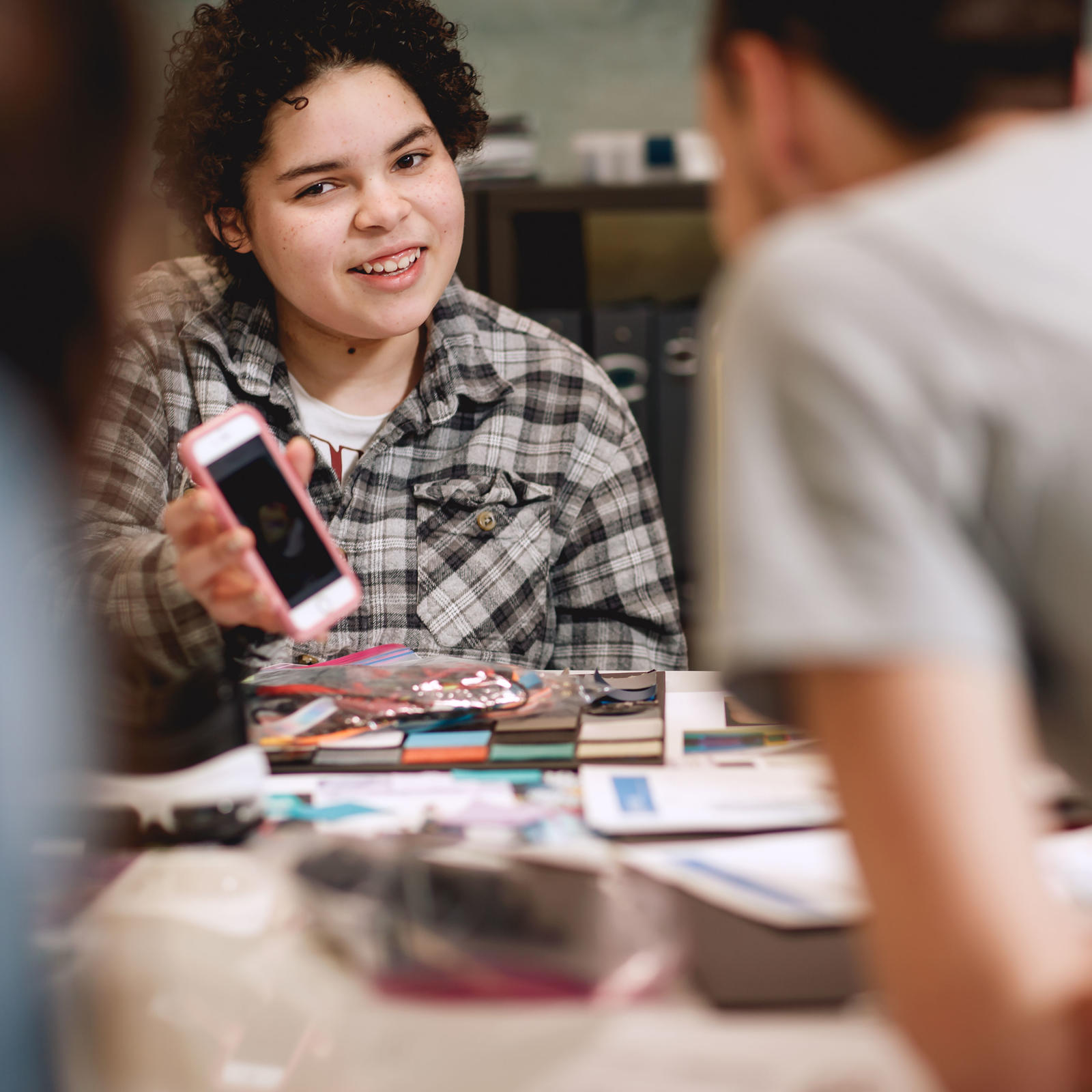 "My favorite part about designing a shoe was seeing all of the ideas I had with my team," says Kirsten. "It was really tough to narrow it all down." 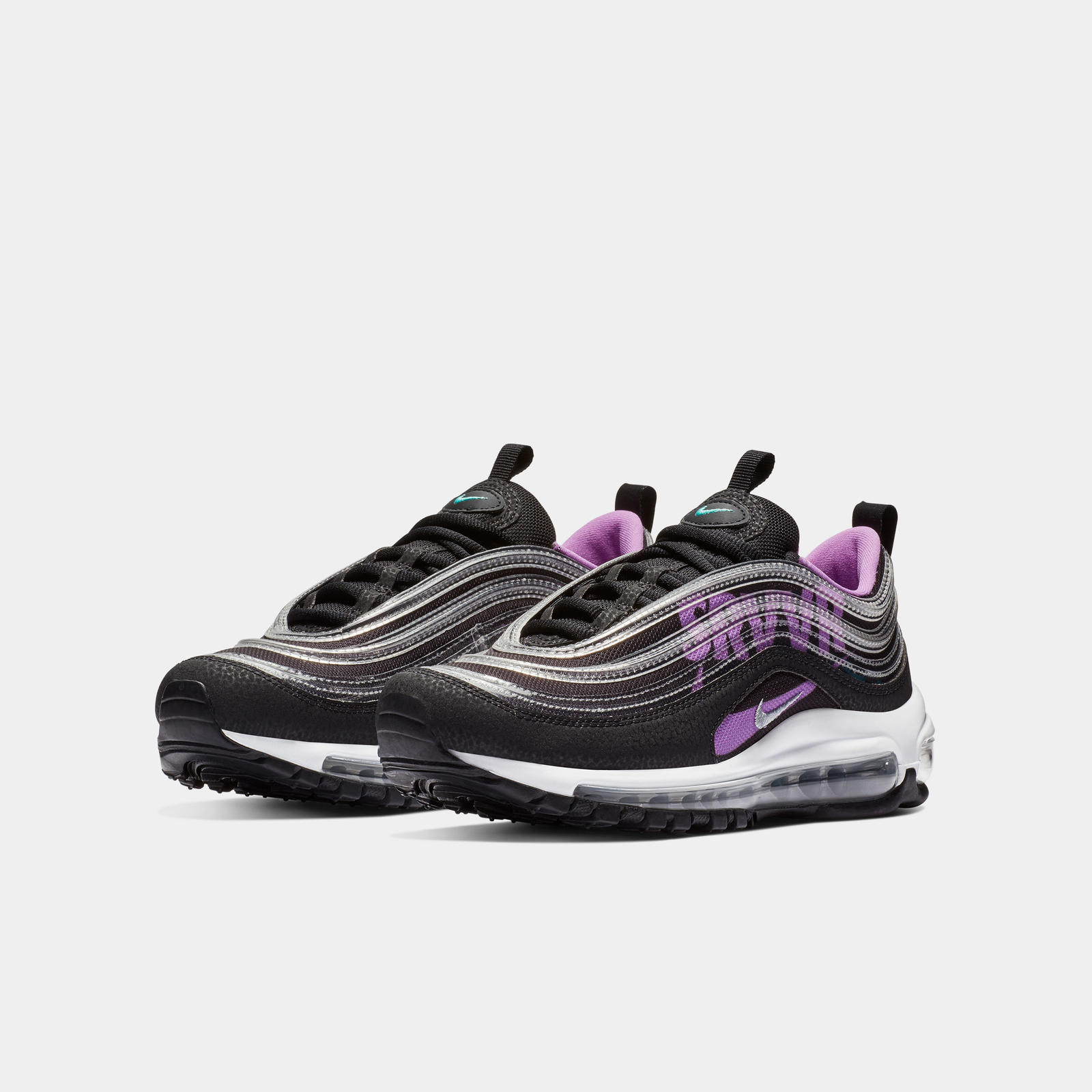 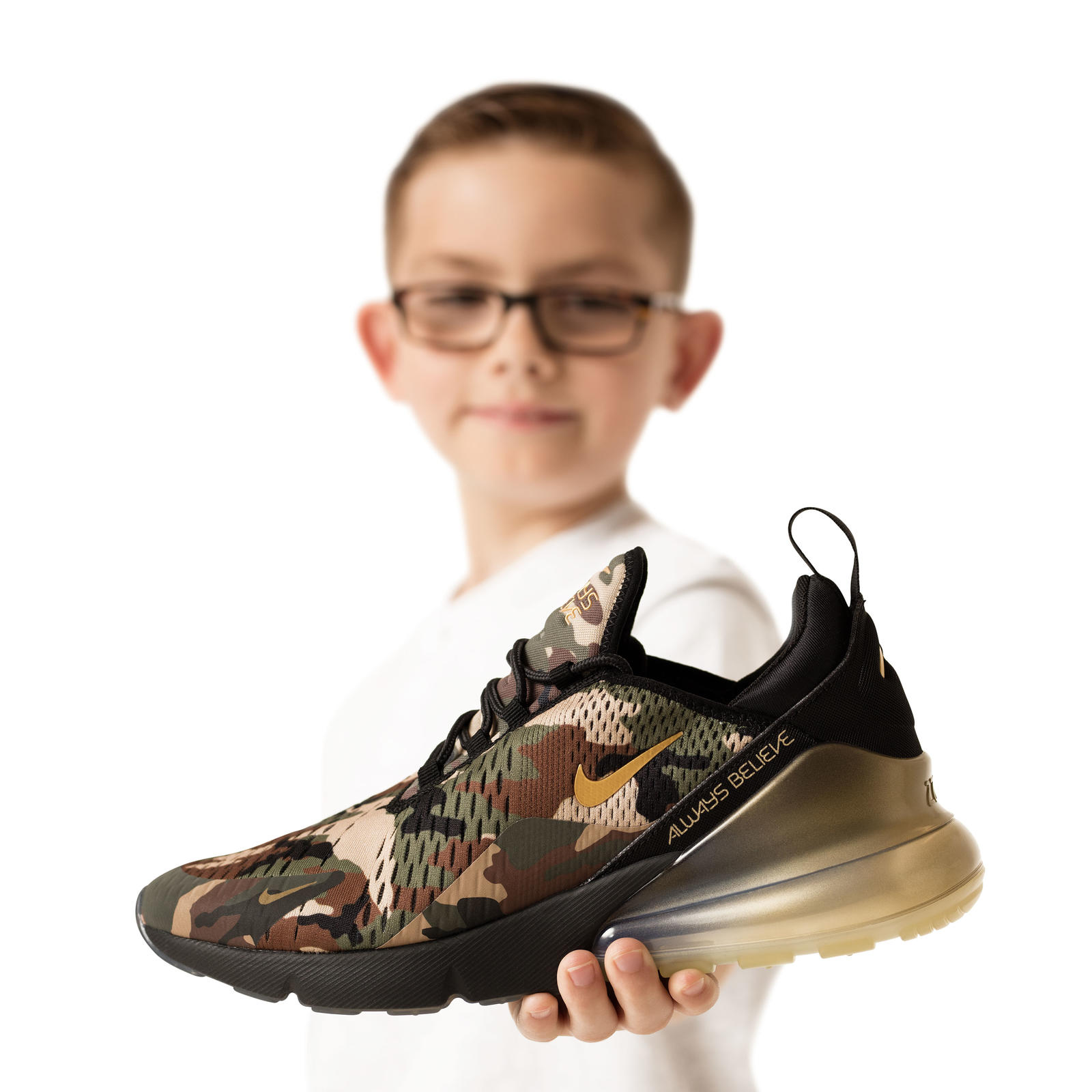 The camo print on Aiden's NIke Air Max 270 is a shoutout to his cousin, Michael, who serves in the military. 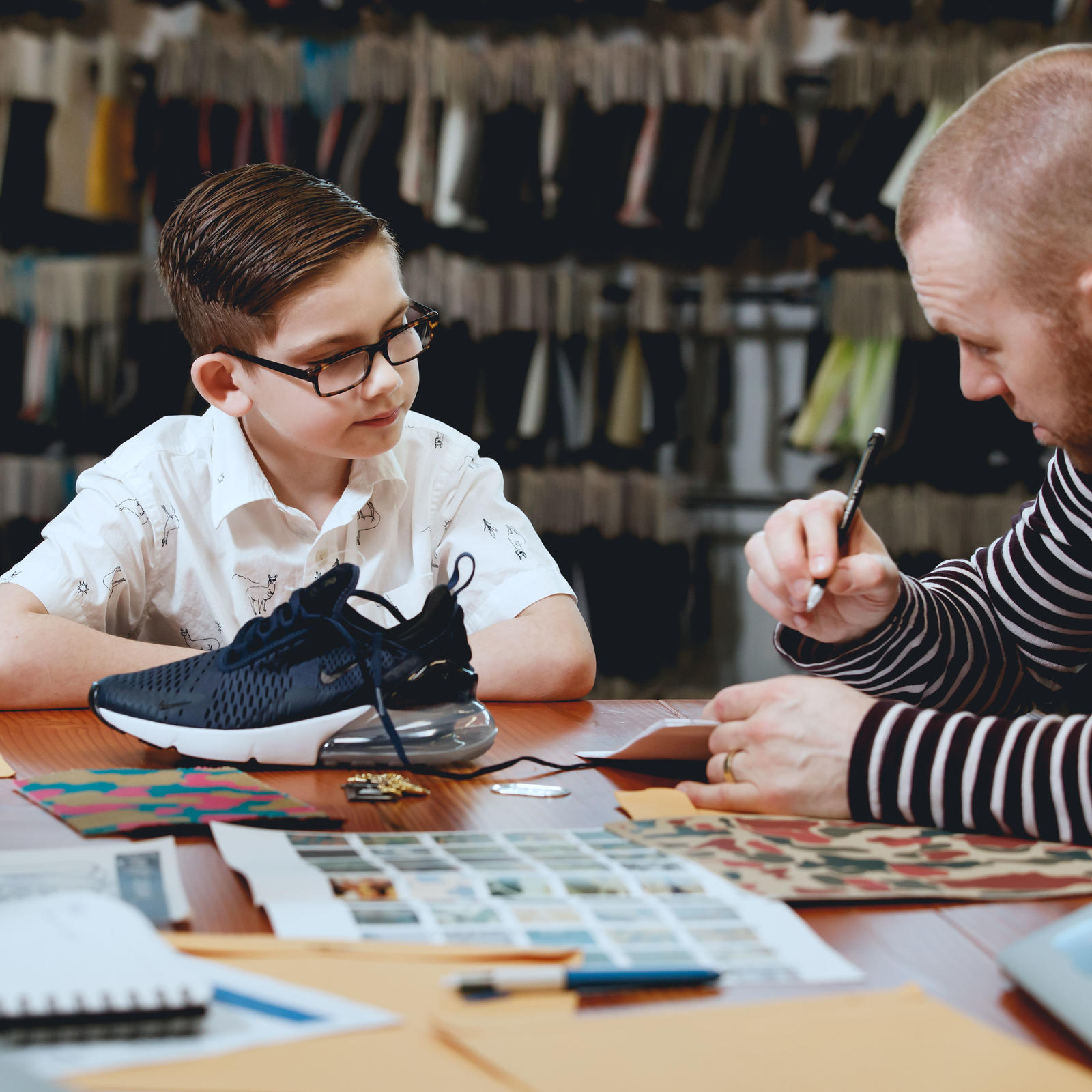 "It kind of felt like being the boss!" says Aiden about the shoe-design process. "I told my team, 'Are you ready for this?'" 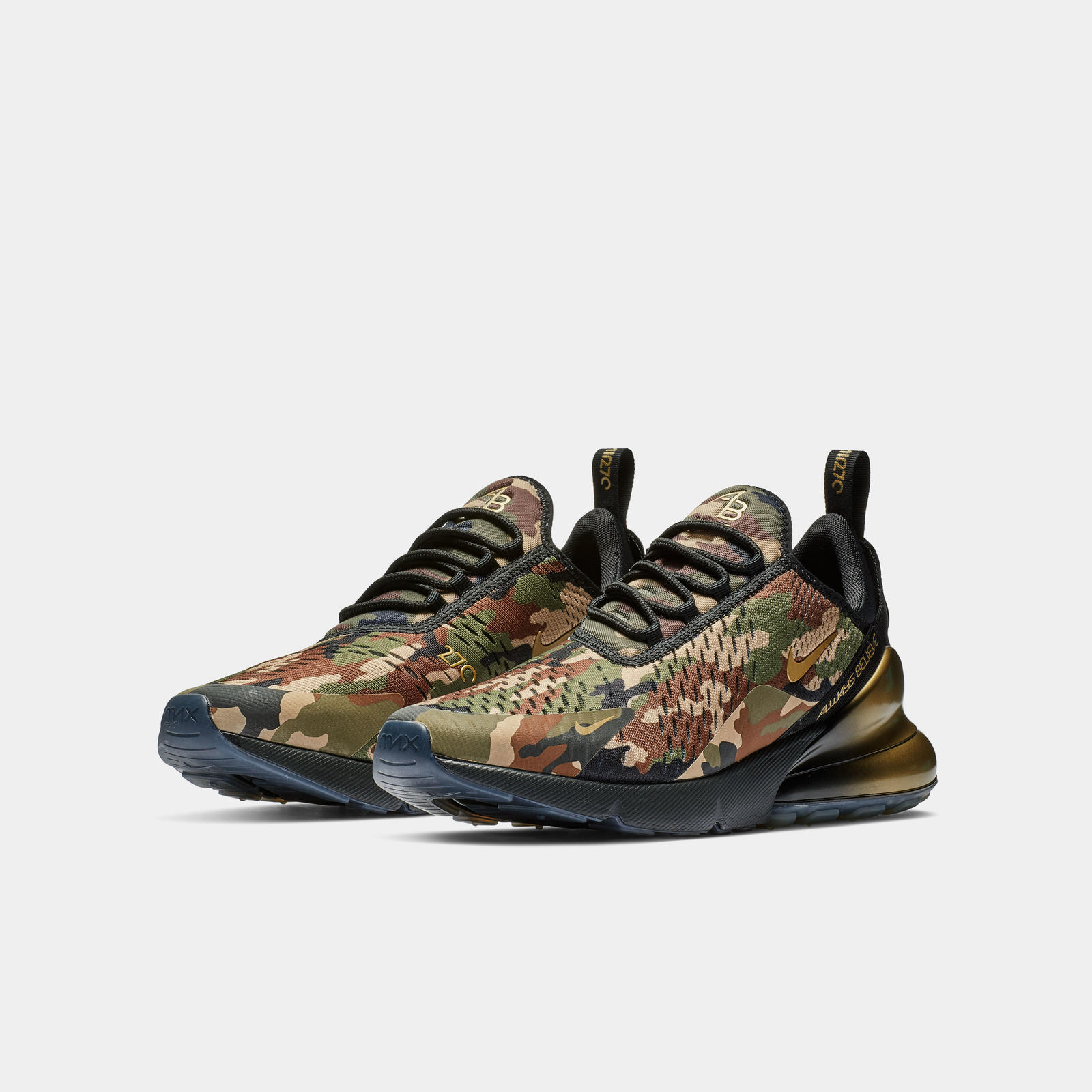 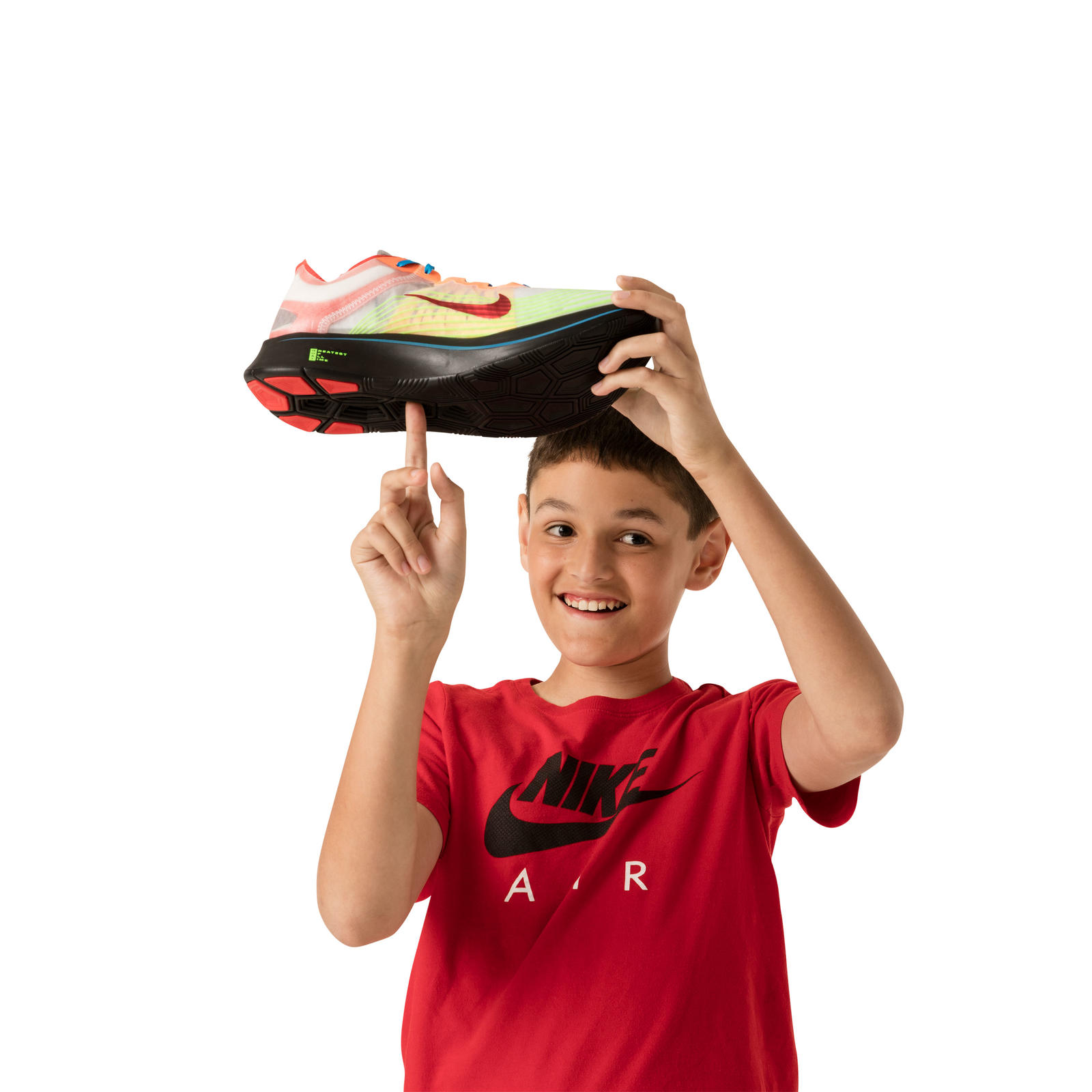 If a running silhouette could dream of homeruns and strikeouts, it might look like Payton's shoe, which has a baseball-stitch graphic on the sockliner and on the back. 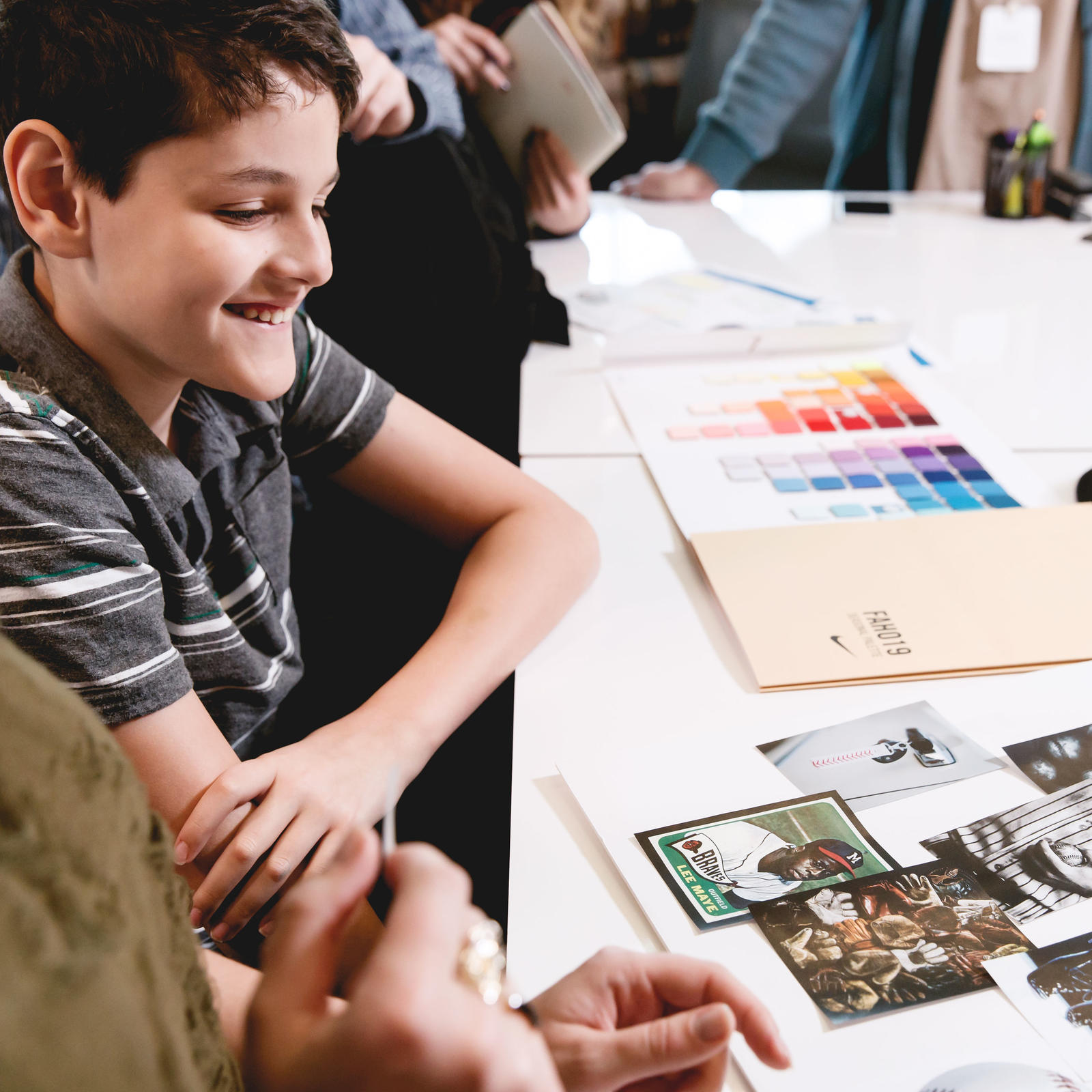 Payton says that seeing his ideas all come together in the shoe was one of his favorite parts of the design process. "I can't pick just one favorite thing!" He says. "That's too hard!" 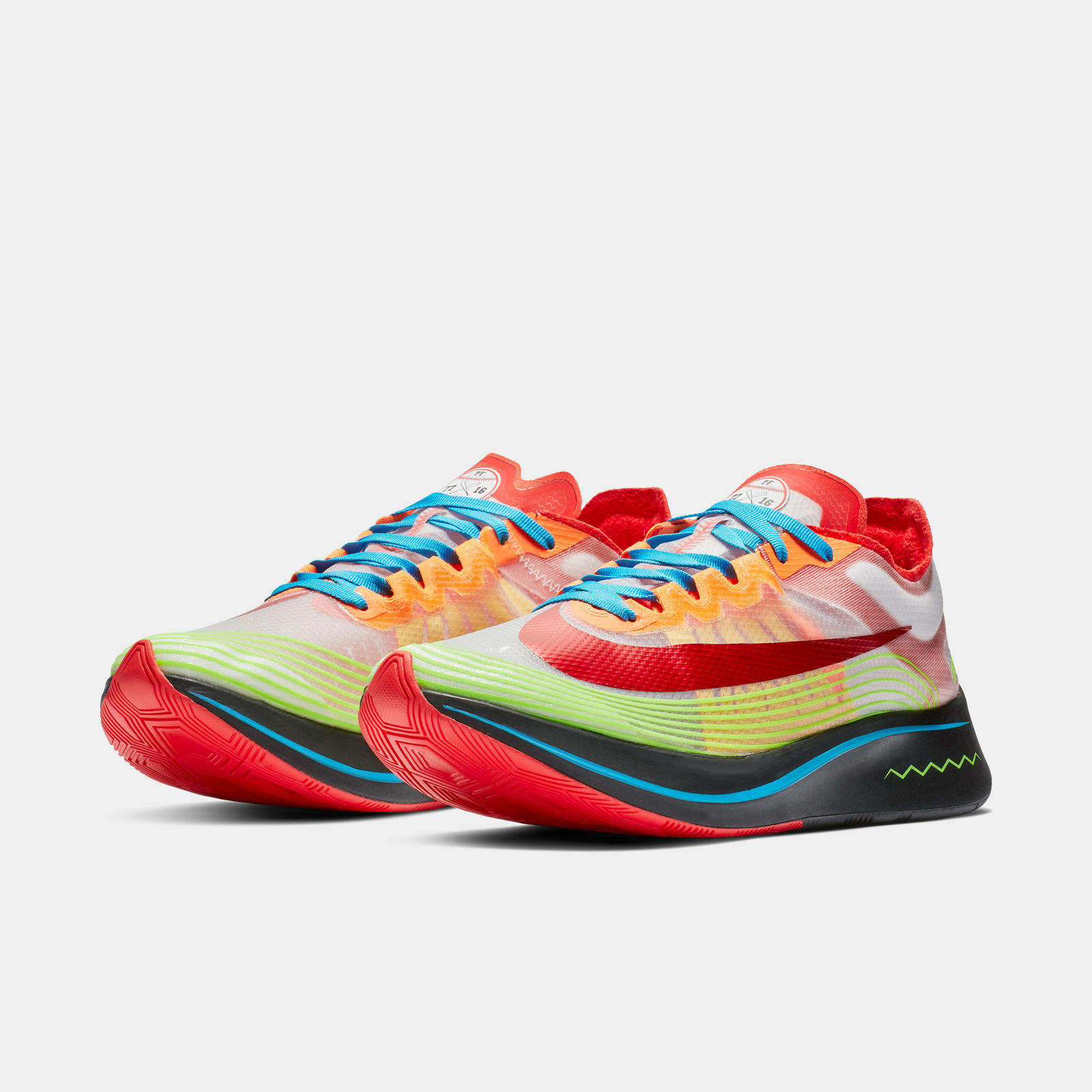