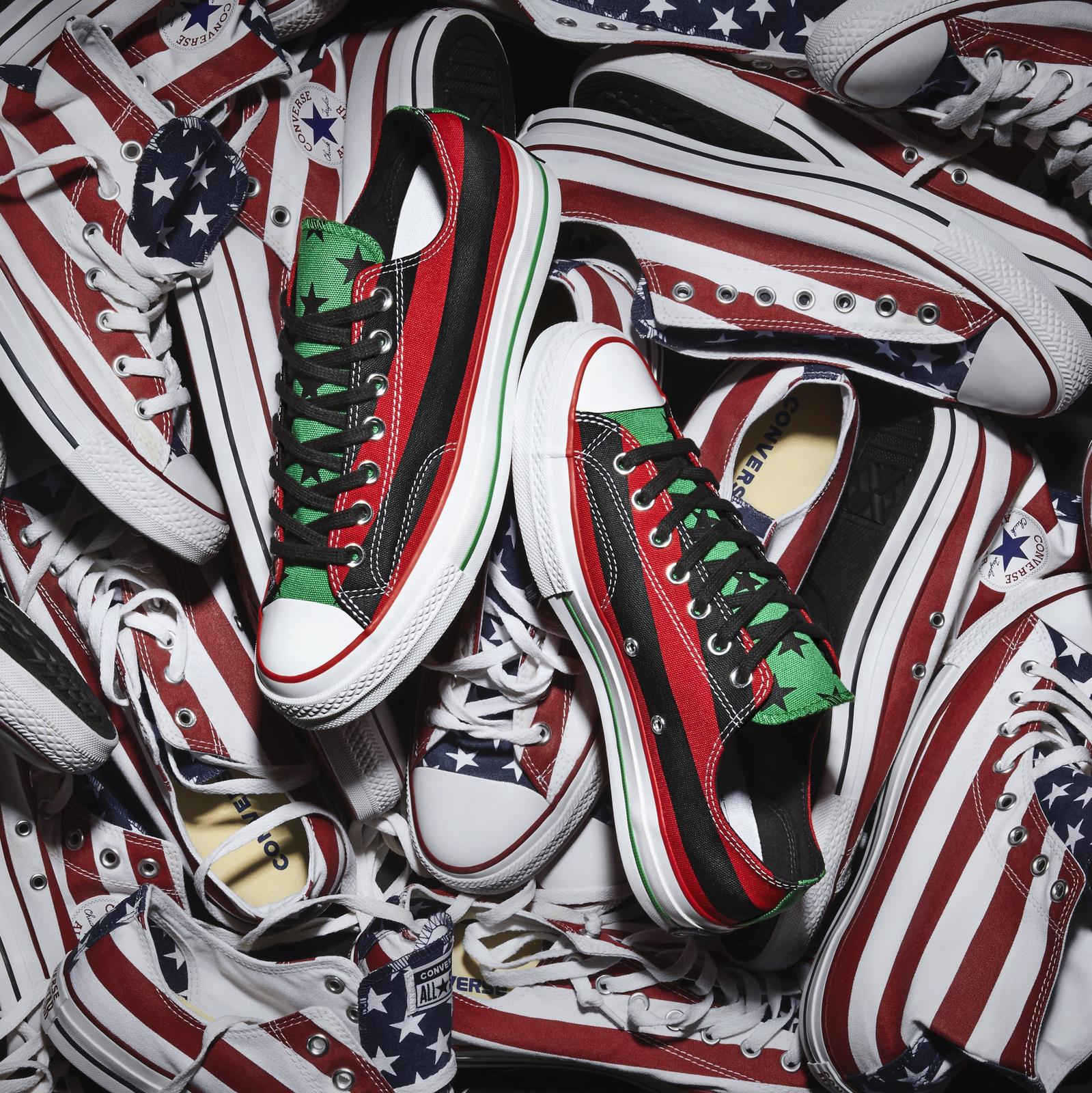 If the Converse Chuck Taylor All Star is a classic and iconic expression of American culture, how does its meaning transform when it reflects the Black experience and identity?

It’s through this provocation that Tremaine Emory questioned the intention of his Converse x Denim Tears collection. With his collaboration, Emory and Converse worked together to translate the African-American flag to the canvas of the Chuck 70 for the first time.

“Tremaine Emory exemplifies the power of using your voice to create positive social change,” says Brandis Russell, Vice President of Global Footwear at Converse. “We hope that the application of the African-American flag to our iconic Chuck will encourage dialogue on the Black American experience today and help ignite the change we want to see for a more equitable future.”

The African-American flag, a constant symbol in Emory’s work and an artistic evolution of Marcus Garvey’s red, black and green Pan-African flag, created an opportunity to present a powerful stimulus for young Black men and women. Growing up in Jamaica, Queens, Emory regularly visited Liberty Rock, and in doing so, ingrained the potency of the symbolism.

“One of the best things you can do is help things be seen, and in modern times that may have been lost for whatever reason. I love to take iconography, manipulate it and also reshow it to people who haven't seen it,” explains Emory of his process.

The Converse x Denim Tears Chuck 70 considers historical uses of the Pan-African colors and flag, from its origins through contemporary art reworkings, to address the depth of its meanings.

“My favorite All Star is the red, white and blue one,” he says. “Applying the red, black and green puts the Black gaze on that version, making something just as cool — but allowing more people to see themselves in it. It’s about creating a metaphor for Black people having a part in this country that they built.”

For the last four months, Converse and Emory have worked together to assure a purposeful launch. The result is the creation of an extended platform that aims to increase civic education, engagement and participation among young Black creatives leading into the U.S. election this November and beyond.

The launch reflects Converse and Emory's shared progressive ethos. A multidisciplinary storyteller, Emory is a noted advocate against injustices in the Black community. Since the launch in 2019, Denim Tears has employed art, spoken word and product design as conduits and embraces a belief that change is sparked through conversation.

“It's about helping people realize what they can do,” says Emory. “I want to help inspire people to self-educate, and to keep it going after this election.”

1. Converse and Denim Tears enlisted For Freedoms, an artist collective that models and aims to increase civic joy, discourse and direct action, as the campaign’s creative partner. Converse will release a short film in late October that features Tremaine Emory and Hank Willis Thomas, artist and founder of For Freedoms, that aims to express the positive impact of civic engagement. Converse will also release a graphic voting series created by For Freedoms both digitally and physically.

2. Converse, Denim Tears and For Freedoms have partnered with the Whitaker Group, a Black-owned experiential retailer by James Whitner, to distribute the new graphic series in five states — Florida, Georgia, North Carolina, Ohio and Texas — which is focused on education, awareness and encouraging the Black community to show up to the polls.

3. Converse provided an additional monetary contribution to voting initiatives, in support of Emory’s goals of raising awareness in civic engagement. This work will further the efforts of Converse’s ongoing Vote campaign, which has seen more than 20,000 people register to vote or check their registration status at www.converse.com/c/vote. Tyler, the Creator, Alexis Sablone and Sage Elsesser have all participated in this effort.

4. DenimTears.com will donate all proceeds of the Converse footwear collaboration from sales beginning October 22, to further the missions of For Freedoms and Black Voters Matter.

Make a voting plan, find your polling location and check your ballot at www.converse.com/c/vote.

The Converse x Denim Tears Chuck Taylor All Star will be available October 22 exclusively at denimtears.com and globally October 29 at converse.com and select retailers.