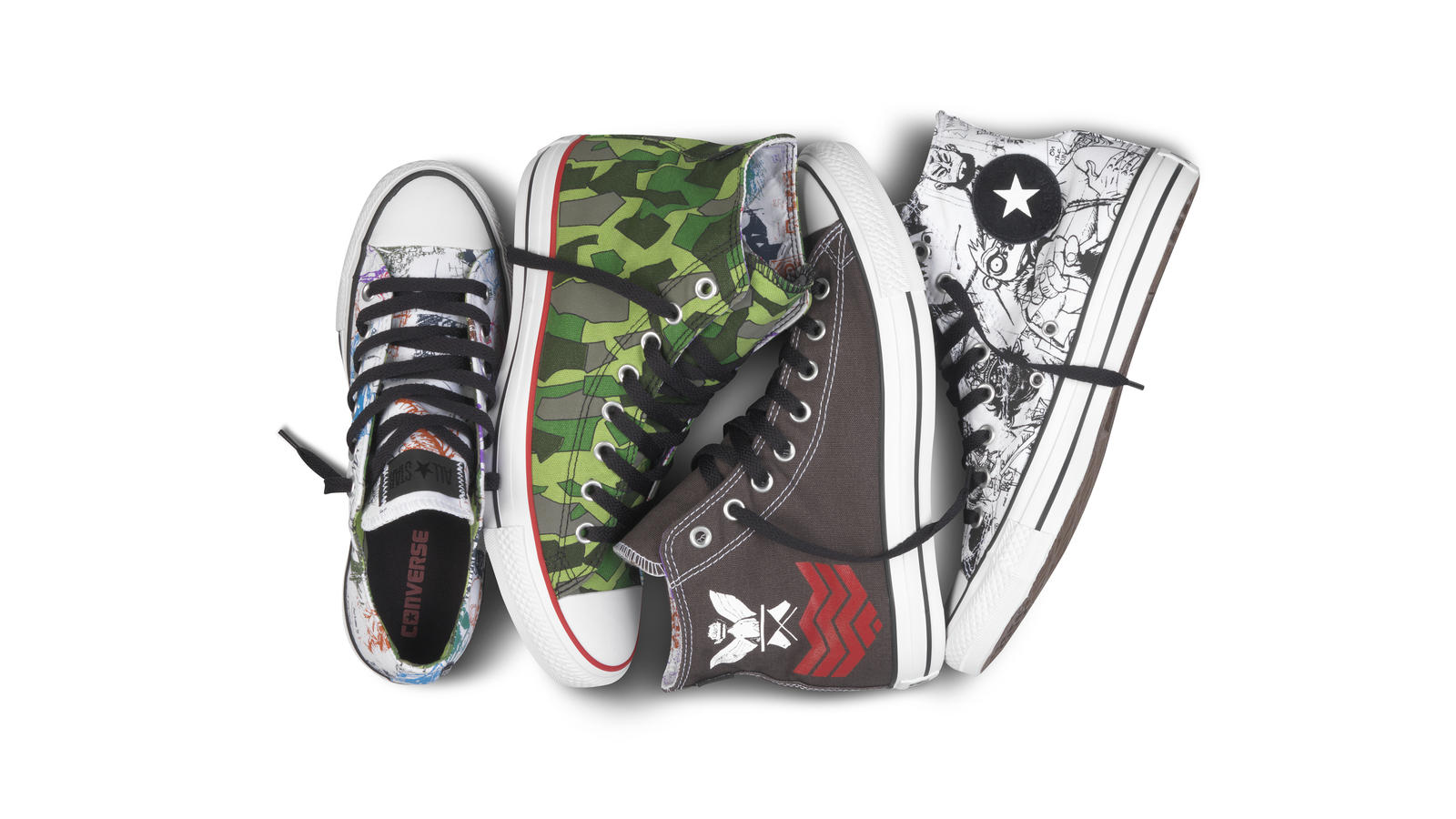 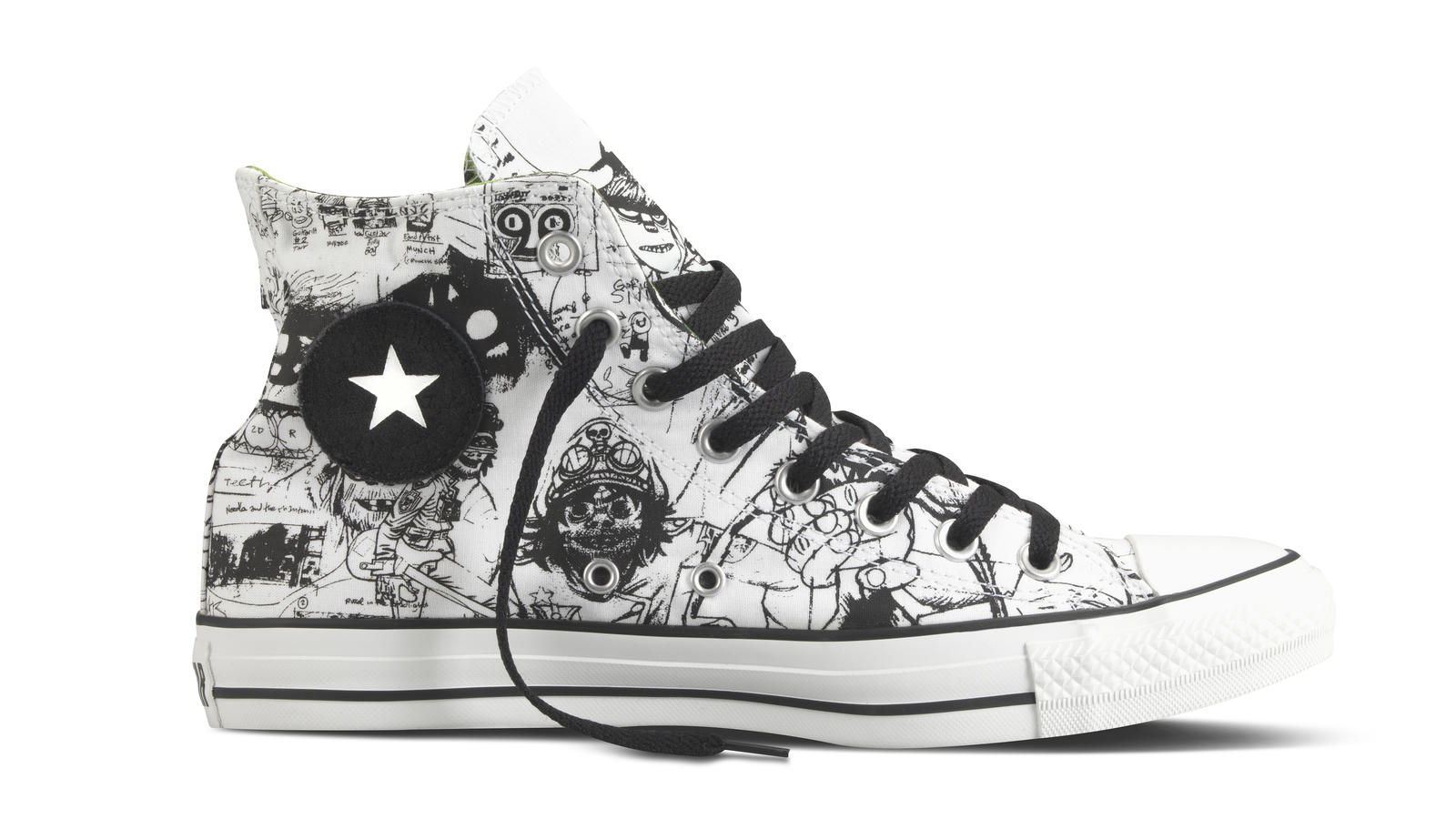 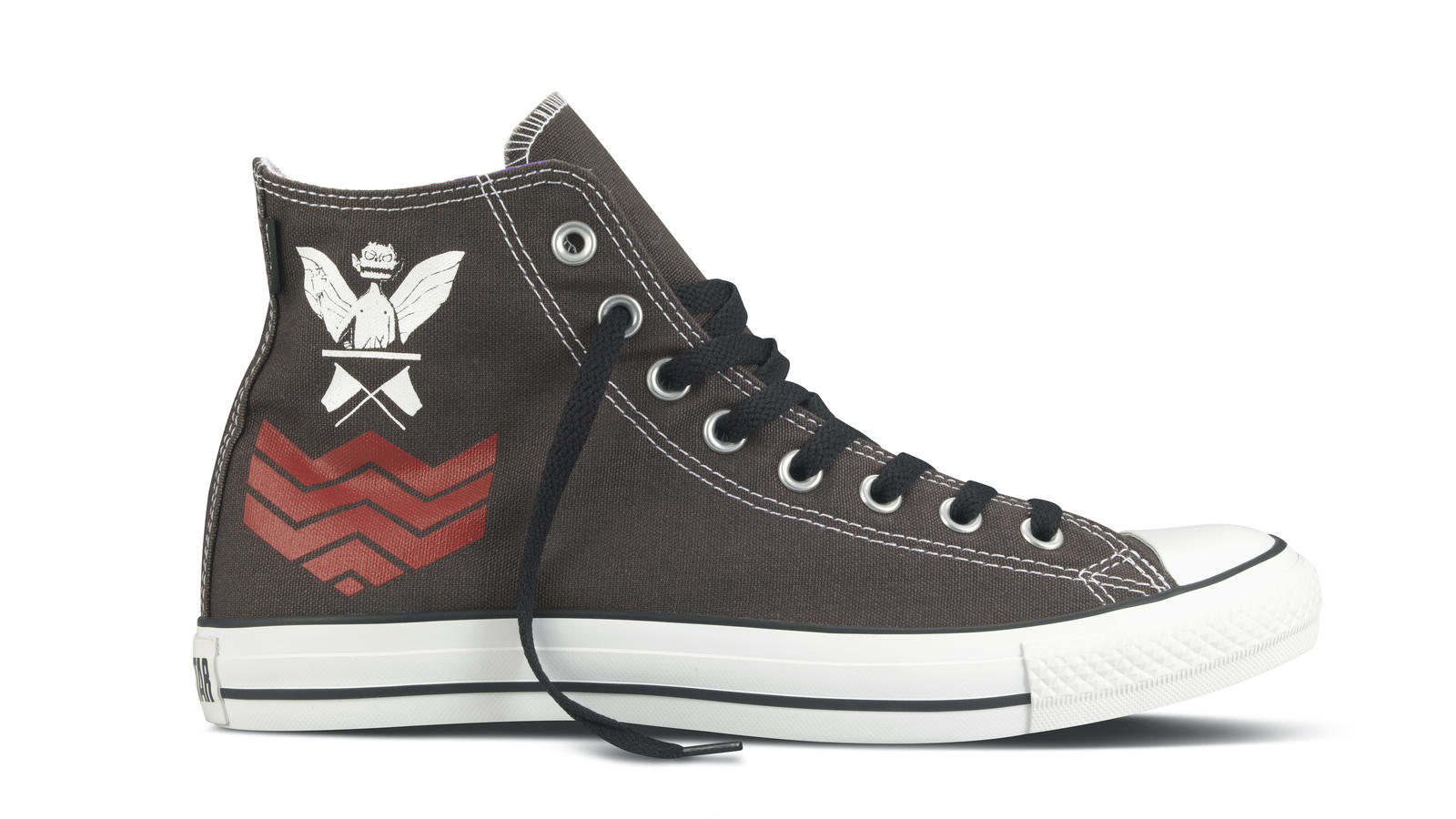 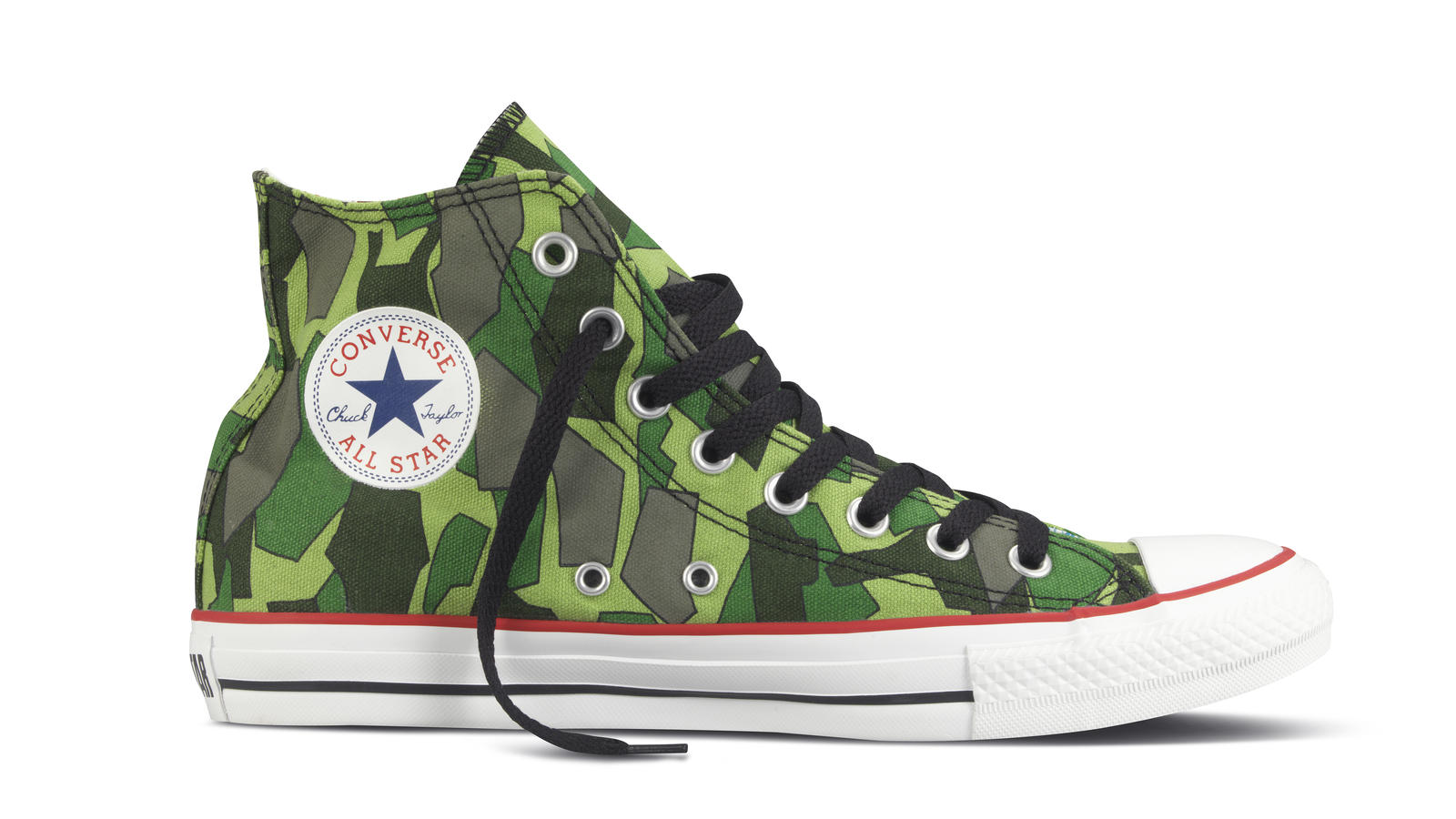 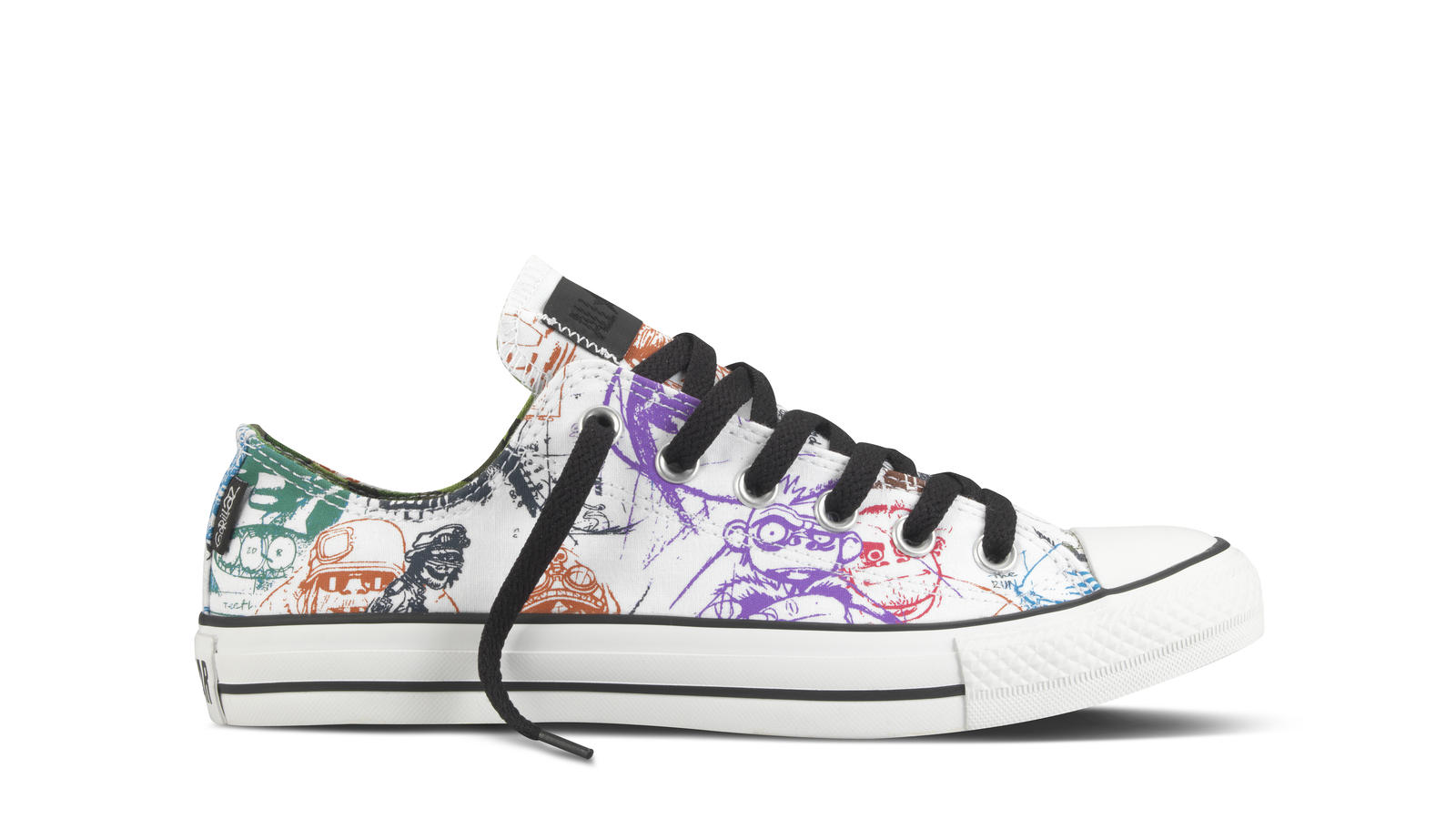 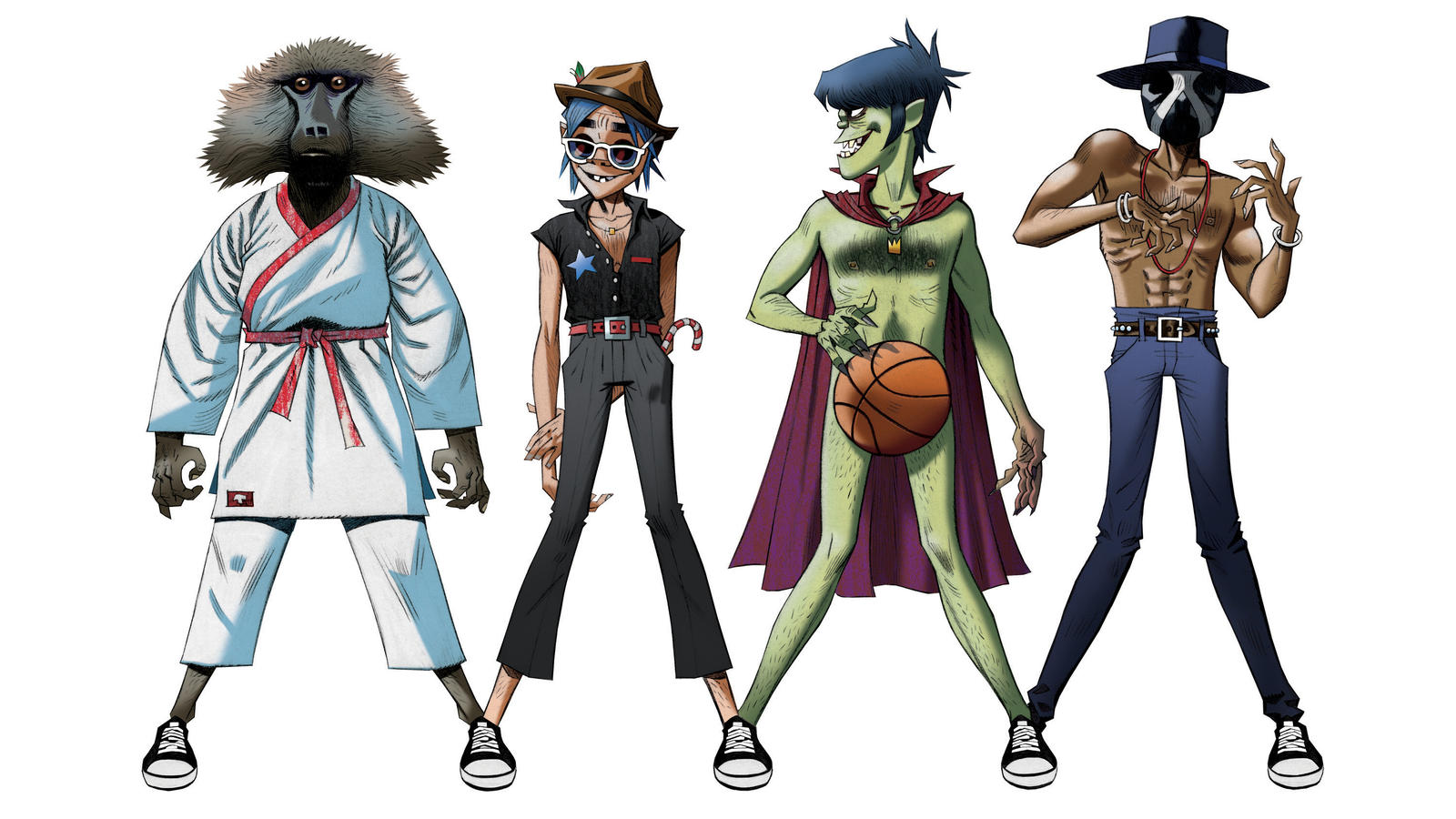 NORTH ANDOVER, Mass. (February 9, 2012) – Today, CONVERSE Inc. unveiled four distinct design concepts for the newest footwear collaboration with the world-famous virtual band, Gorillaz.  Launching in February 2012, the styles from the Spring 2012 collection combine the iconic Chuck Taylor All Star silhouette with the band’s legendary graphic images. Award-winning designer and Gorillaz co-creator Jamie Hewlett has designed exclusive prints incorporating elements from their ground breaking artwork. Each design melds their diverse backgrounds and unique influences to create a revolutionary collection. The partnership with Gorillaz will also include a Converse “Three Artists. One Song” original track titled “DoYaThing” featuring Gorillaz, James Murphy and Andre 3000 of OutKast. The free track will be available for download at www.converse.com on February 23, 2011. Gorillaz are widely recognized for not only creating a new genre of music but redefining the concept of a band. With a unique sound that brought together alternative rock, hip hop, electronic and pop music, the band implemented fresh ideas from their limitless fictional universe and have sold over 15 million records worldwide to date.  In 2006, the band won a GRAMMY® Award for “Best Pop Collaboration with Vocals”, for “Feel Good Inc” with De La Soul. Last November, they released the long-awaited “Singles Collection: 2001-2011,” a celebration of a decade together. To celebrate the collection and impending release of “DoYaThing”, Gorillaz Sound System will return to play their second date at the legendary 100 Club in London on Wednesday, February 15, 2011.  Fully endorsed by Gorillaz, Gorillaz Sound System is a unique audio-visual experience, featuring music, live percussion and special projections. Please visit www.converse.co.uk or www.gorillaz.com for more details and ticket info.

The Converse & Gorillaz collection will be available at Journeys and globally at premium retail stores and online at www.converse.com beginning February 23, 2012.

Gorillaz Collection Long time fans of the brand, the Gorillaz collection gives the classic Chuck Taylor All Star silhouette an edge with four different looks inspired by the band. The military inspired camouflage print, taken from the cover of their self-titled debut, is the signature design for the collection. The military theme is also featured on a black/brown canvas hi-top shoe featuring an image of their famous Pazuzu character. The lining of both designs have an exclusive print featuring a collage of images from their album artwork made specifically for this collaboration. The collection also includes a Chuck Taylor All Star hi-top and oxford shoe with a black and white version of the print on the outsole and the Gorillaz camouflage print in the lining. All shoes from the collection contain a Gorillaz heel tab and hangtag with additional details on the product. Suggested retail price: $60 In continuation with Converse’s dedication to the global music community, the design partnership with Gorillaz will include Converse’s latest installation of their signature “Three Artists. One Song” collaboration featuring Gorillaz, James Murphy and Andre 3000.  “Three Artists. One Song” was created as an opportunity for three distinct artists to come together from different backgrounds to create an original new song.  “Three Artists. One Song” has recently seen pop duo MATT & KIM, rapper and producer Soulja Boy and singer-songwriter and multi-instrumentalist ANDREW W.K, among others, come together to create an original song made available for fans for free. Gorillaz will serve as the latest artist to anchor “Three Artists. One Song” and will debut their track on February 23.  Additional details on the track will be announced at a later date. About Converse Converse Inc., based in N. Andover, Massachusetts, is a wholly owned subsidiary of NIKE, Inc. Established in 1908, the Converse brand has built a reputation as “America’s Original Sports Company”™ and has been associated with a rich heritage of legendary shoes such as the Chuck Taylor® All Star® shoe, the Jack Purcell® shoe and the One Star® shoe. Today, Converse offers a diverse portfolio including premium lifestyle men's and women's footwear and apparel. Converse product is sold globally by retailers in over 160 countries and through 58 company-owned retail locations in the U.S. For more information, visit Converse on the web at www.converse.com.