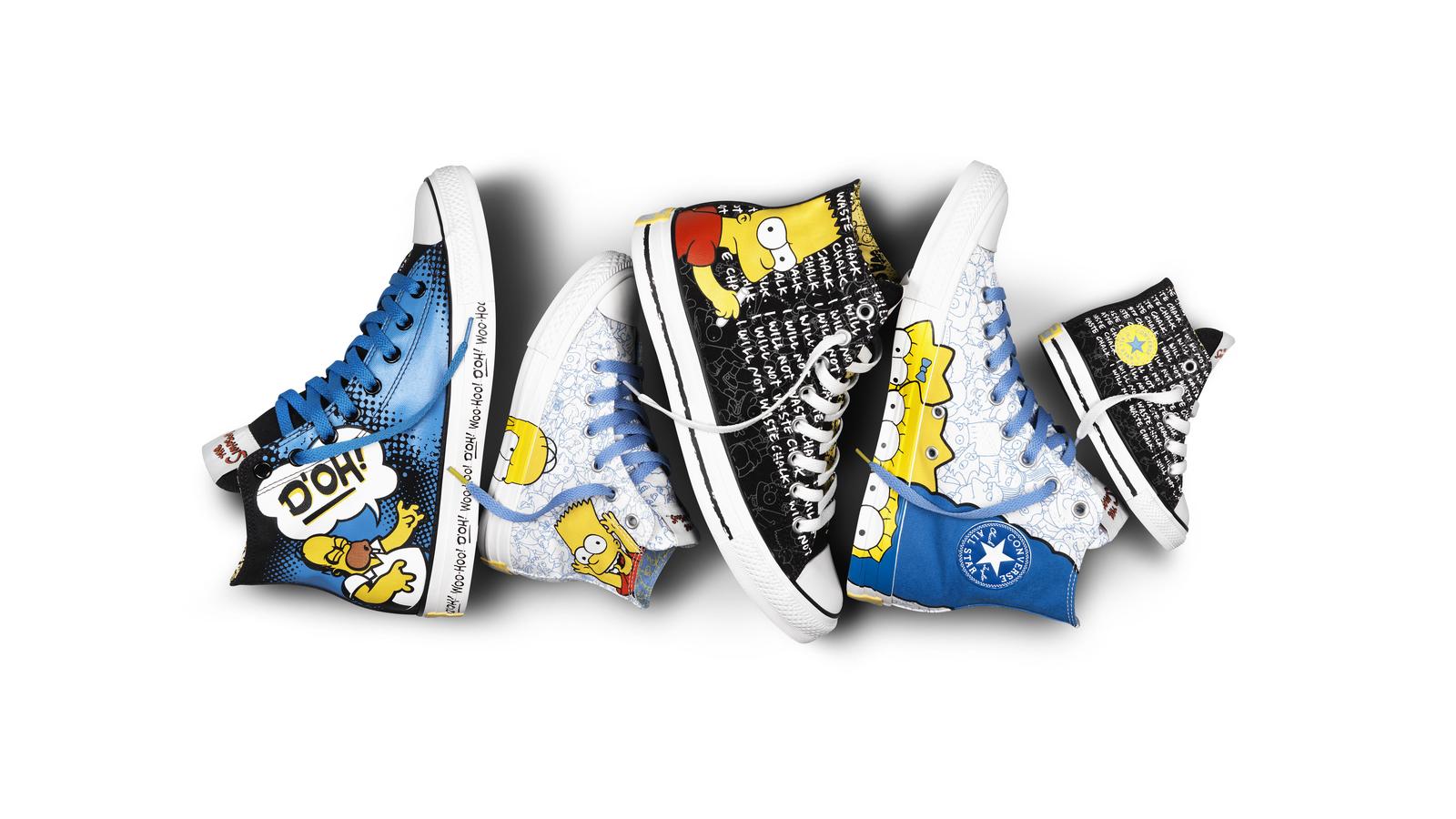 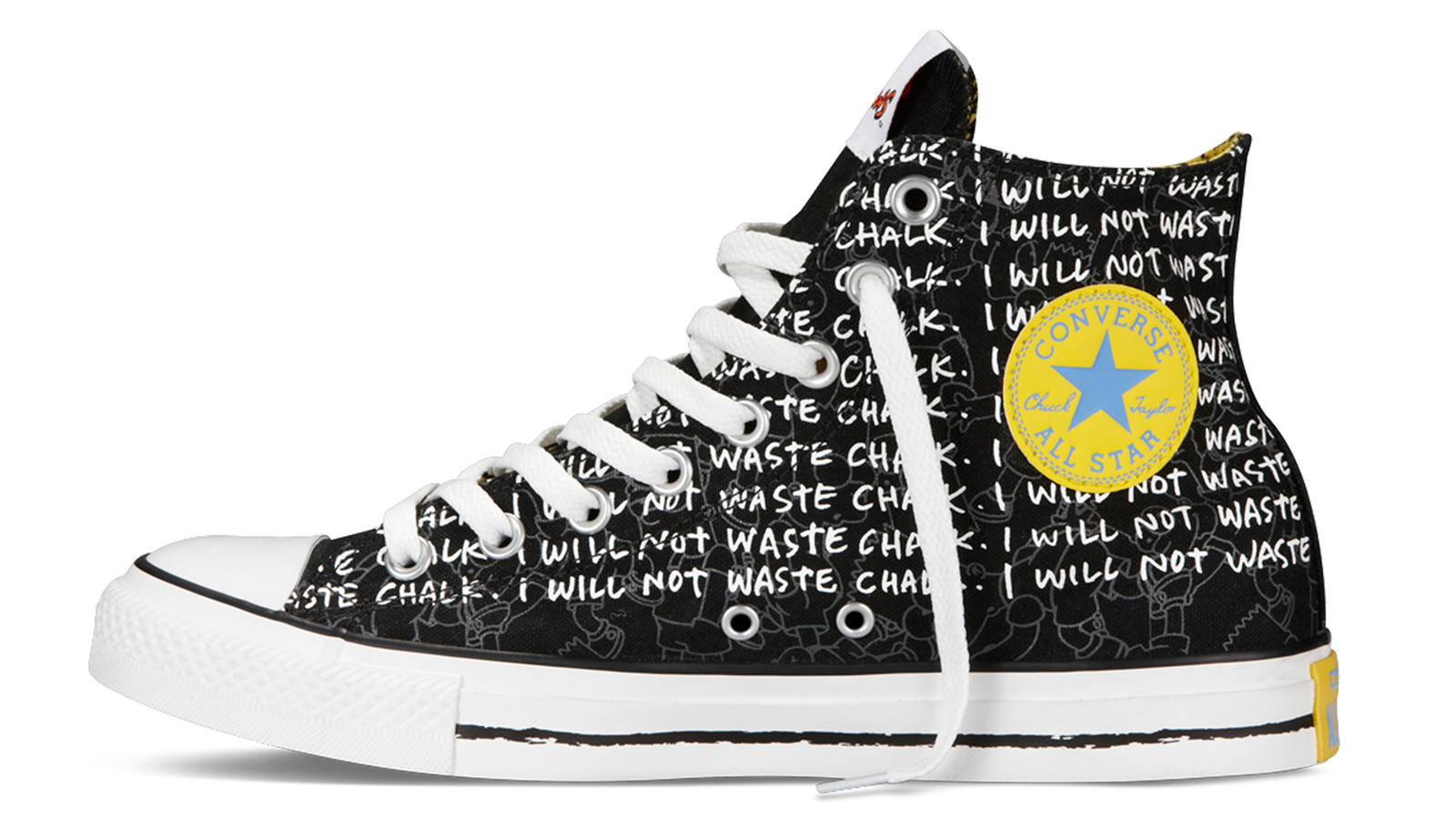 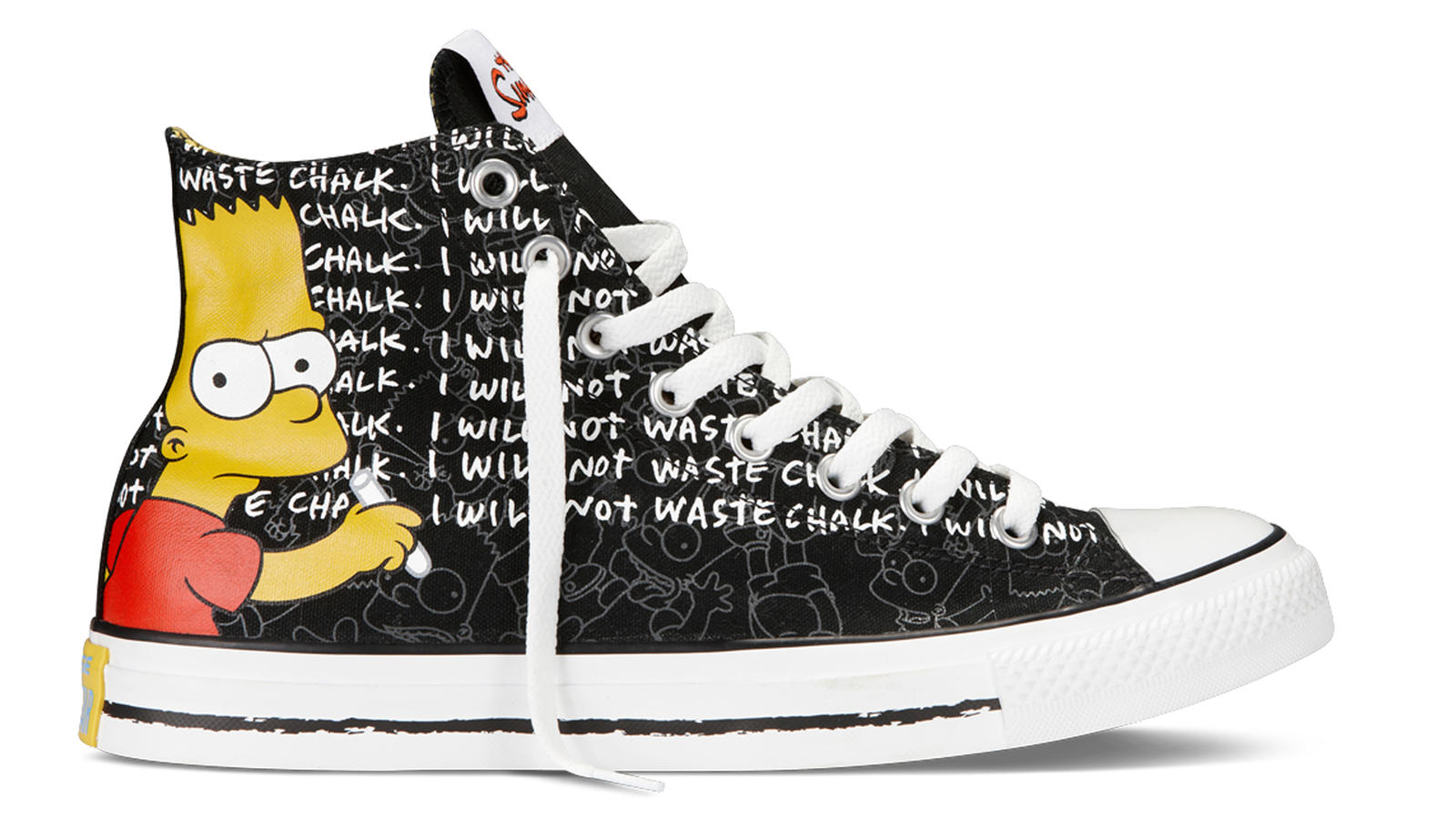 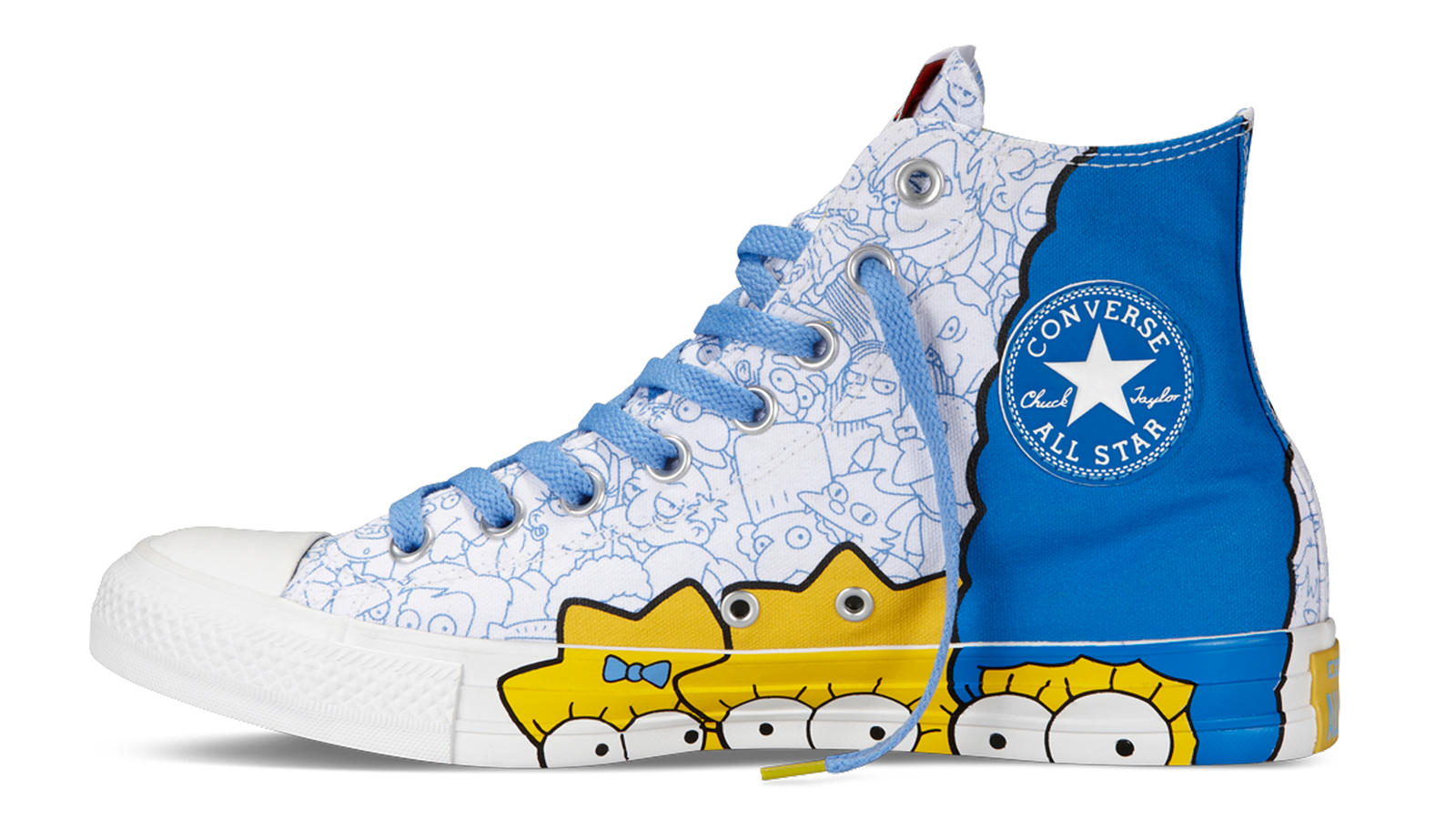 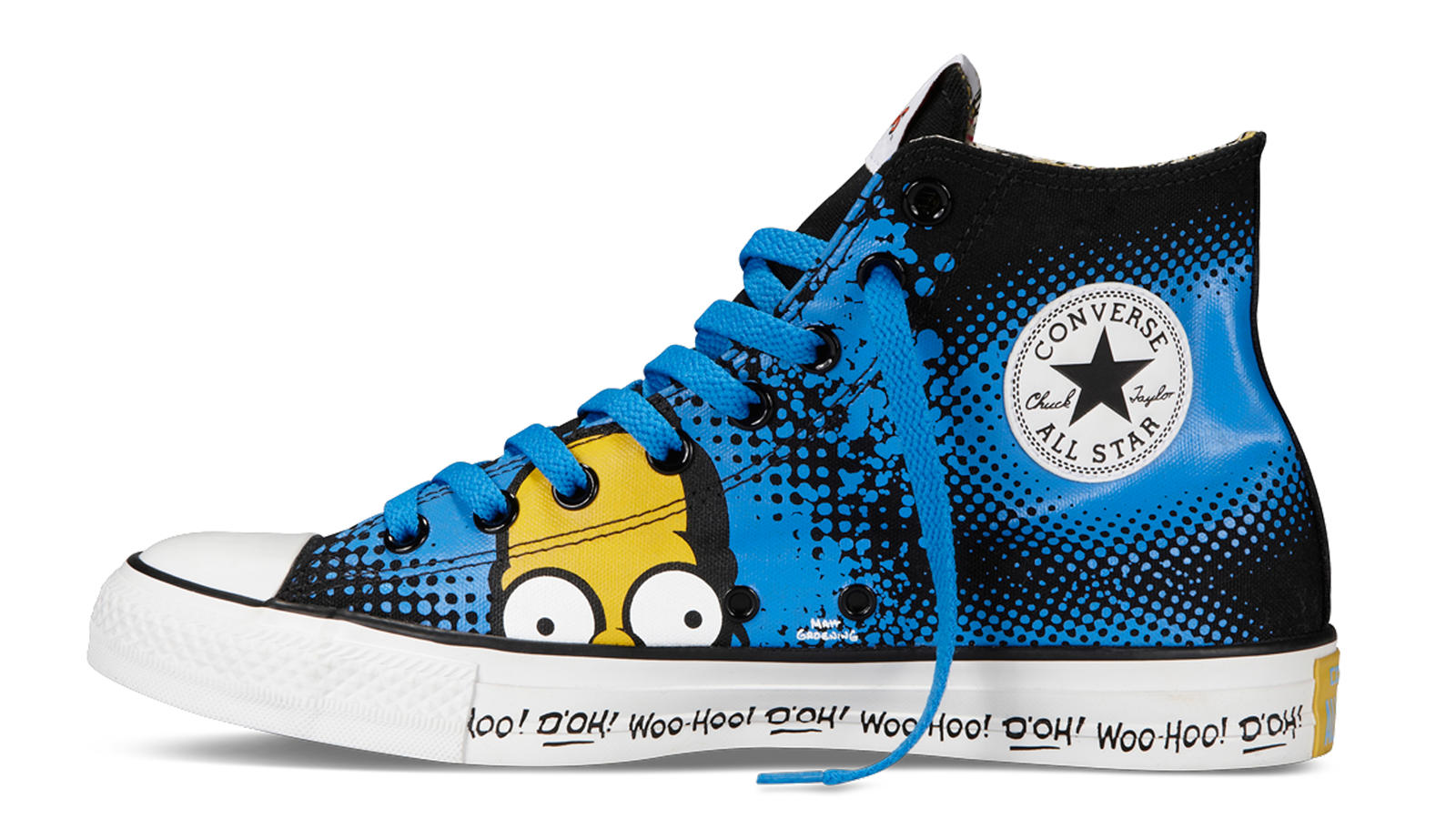 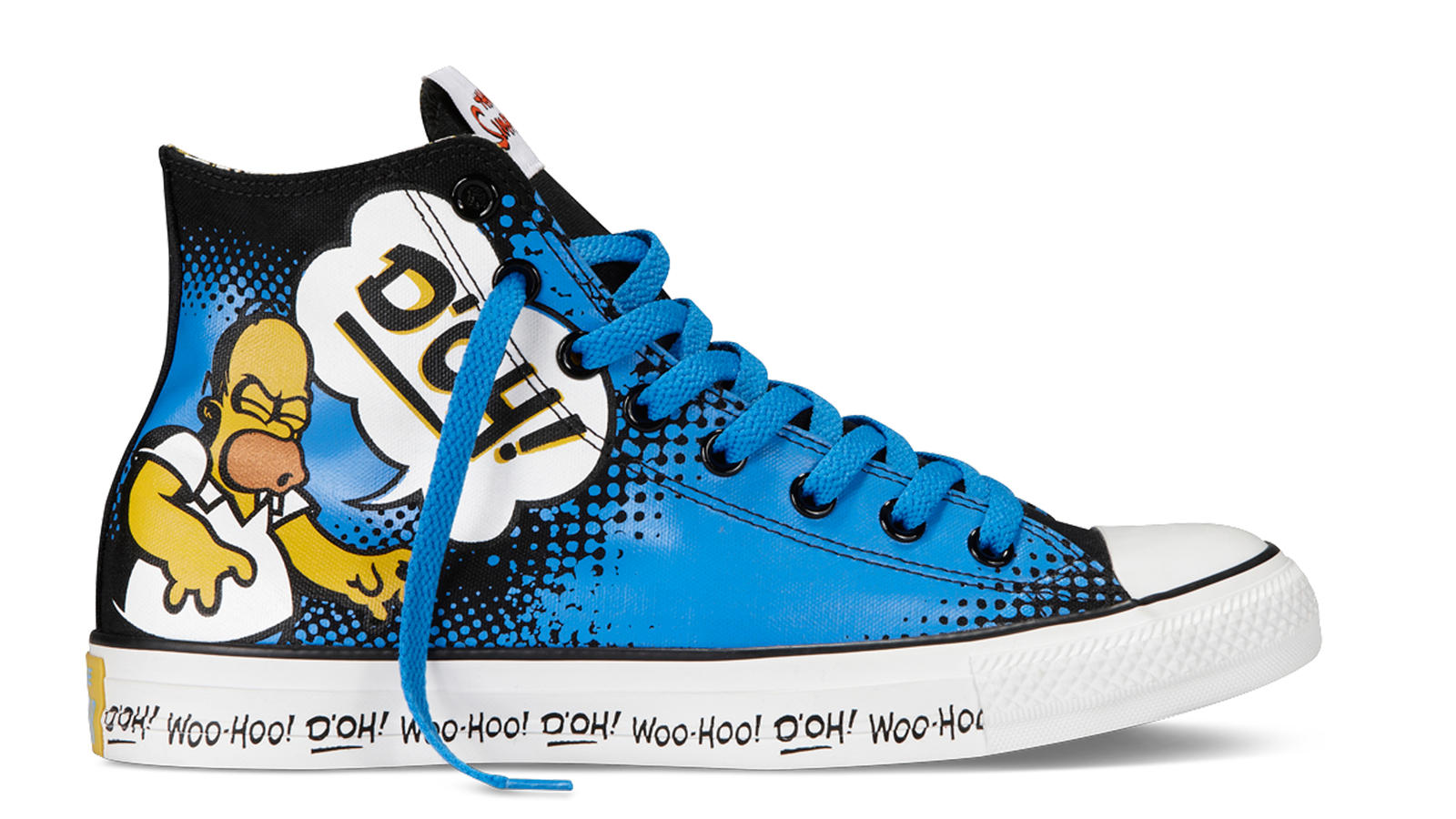 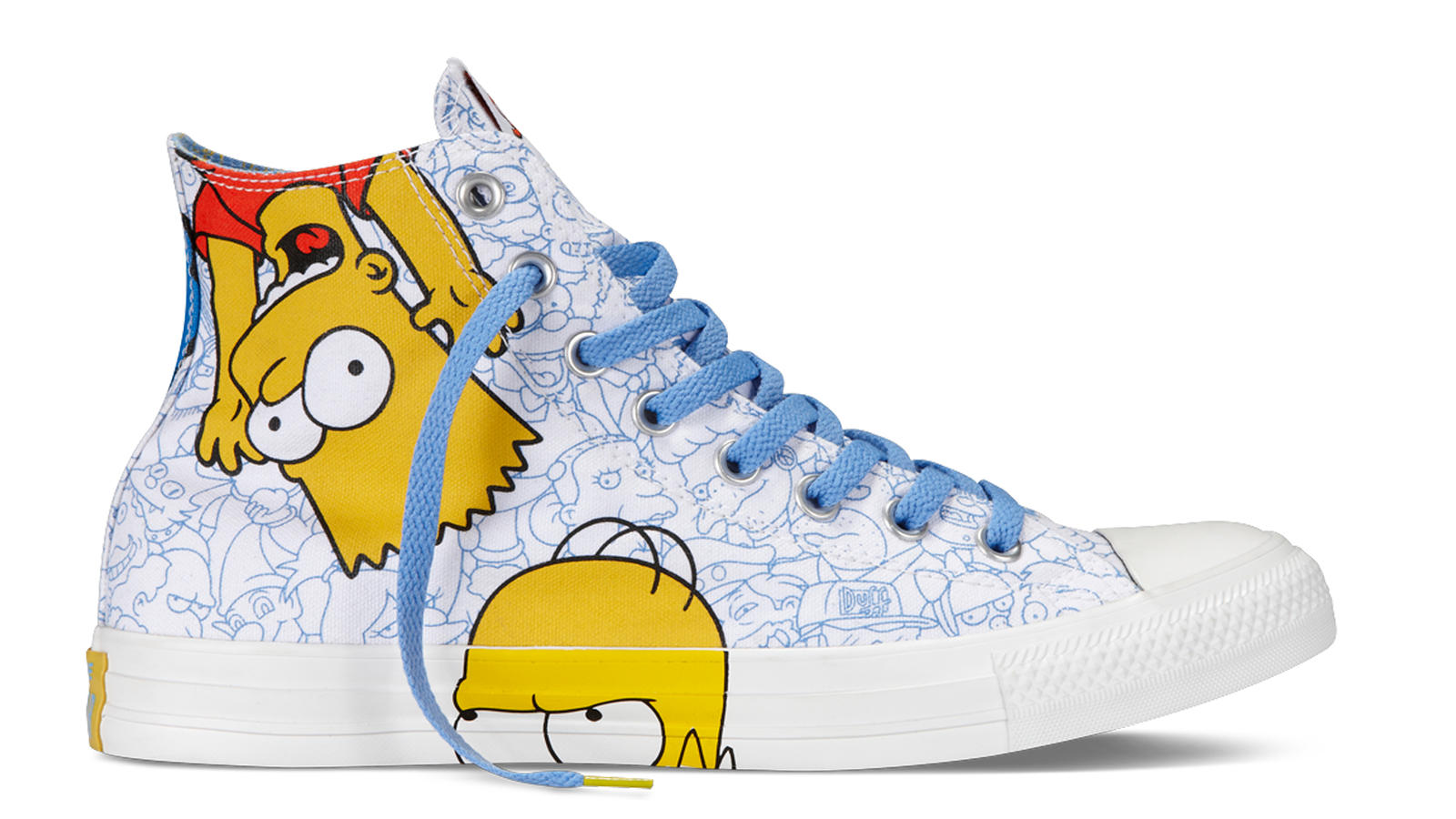 Converse announces a new collaboration with the longest running scripted show in television history, The Simpsons. The Simpsons Chuck Taylor All Star collection will feature custom graphics specially chosen for the collection in styles available for the entire family.

Currently in production on its record-annihilating 25th season, The Simpsons has remained one of the most groundbreaking and innovative entertainment franchises, recognizable throughout the world.  The show’s characters Homer, Marge, Bart, Lisa and Maggie will be featured on the iconic Converse Chuck Taylor All Star in graphics reflective of the show’s wit and humor.

The Simpsons Chuck Taylor All Star collection features colorful screen printed graphics on styles available for fans of all ages.  Available for men, the Homer sneaker includes a blue and black background, accented with Homer exclaiming “D’oh!” on one side of the shoe, and “Woo Hoo!” on the other. Available in children and adult sizes, the Bart sneaker features Bart writing, “I will not waste chalk,” on a black background resembling the notorious Springfield Elementary School chalkboard, accented with a bright yellow inside lining.  The Family sneaker showcases all members of The Simpsons household depicted in their iconic likeness the world has grown to love.

The Simpsons Chuck Taylor All Star collection will be available at Journeys (Journeys.com) and Converse retail stores (Converse.com) beginning June 15, 2013 for $37 - $65.

Converse Inc., based in N. Andover, Massachusetts, is a wholly owned subsidiary of NIKE, Inc. Established in 1908, the Converse brand has built a reputation as “America’s Original Sports Company”™ and has been associated with a rich heritage of legendary shoes such as the Chuck Taylor® All Star® shoe, the Jack Purcell® shoe and the One Star® shoe. Today, Converse offers a diverse portfolio including lifestyle men's, women's and children’s footwear, apparel and accessories. Converse product is sold globally by retailers in over 160 countries and through 78 company-owned retail locations in the U.S. For more information, visit Media.Converse.com.

The longest running scripted show in television history, THE SIMPSONS exploded into a cultural phenomenon in 1990 and has remained one of the most groundbreaking and innovative entertainment franchises, recognizable throughout the world. Currently in production on its record-annihilating 25th season, THE SIMPSONS celebrated their historic 500th episode in February 2012.   The series has won 27 Emmy Awards, been the subject of a hit feature film, and was named the “Best Show of the 20th Century” by Time Magazine. THE SIMPSONS is a Gracie Films Production in association with 20th Century Fox Television. James L. Brooks, Matt Groening, and Al Jean are the Executive Producers. The Gracie Films Worldwide Brand Division develops and produces the licensed content for the series. Film Roman is the animation house.