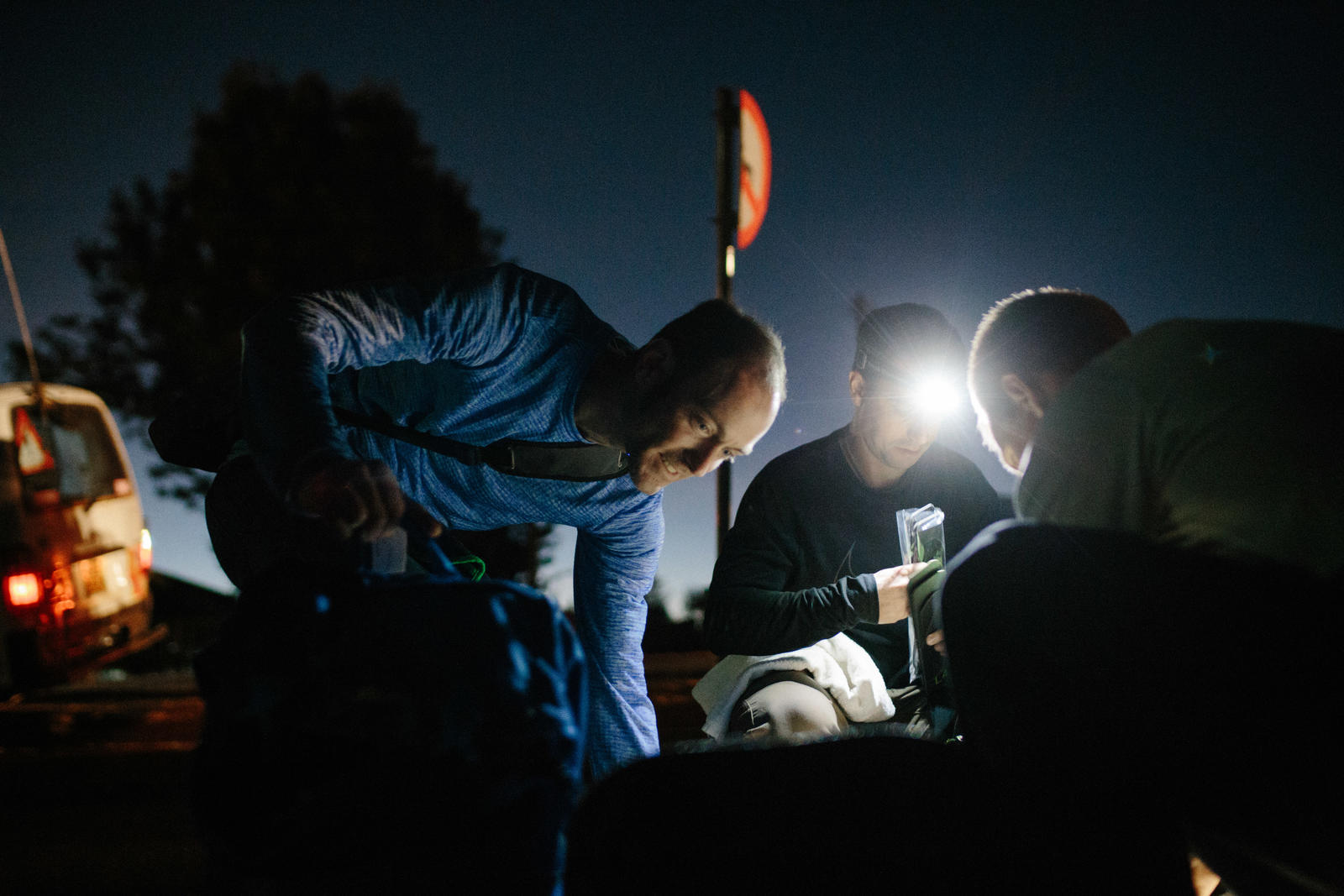 Just before sunrise on a Tuesday morning in Eldoret, Kenya, Eliud Kipchoge is prepped for his track session and examined for levels of "stored energy." 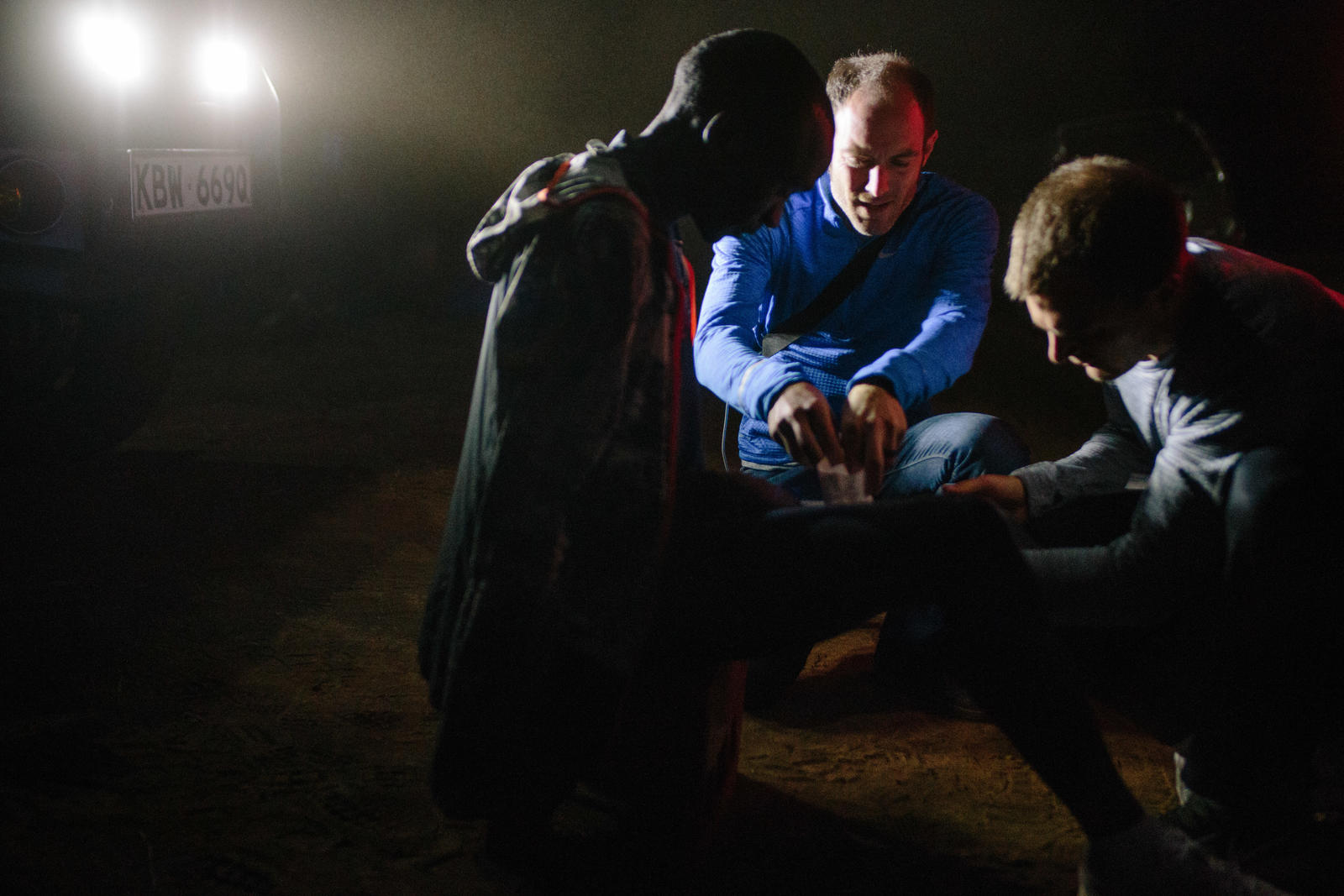 At 6 am on Thursday morning in Eldoret, Kenya, Eliud is equipped with on-body oxygen sensors prior to his 40 km long run.

To make it happen, Nike assembled a diverse team of world-class innovators who are bringing this bold vision to life. Together, they offer an unrivaled combination of expertise. They are engineers and designers; biomechanists and nutritionists; physiologists and materials developers — all working together to help Eliud Kipchoge, Lelisa Desisa and Zersenay Tadese get the most out of every stride.

In their effort, team members have have established a series of touch points over to coming months, from in-person meetings to regular phone/skype sessions. Attending respective athlete training camps — in Kenya, Ethiopia and Spain — allows for assessment opportunity to optimize the routines for all three runners. There, the team considers (among many things) hydration, nutrition, training load and taper times. Additionally, away from the athletes, members of the group continue to obsesses the race environment as a key element of the performance equation. The collected data points and combined insights from all touchpoints are integral to the overall effort of breaking two hours.

Bodecker has been with Nike for 35 years and is the chief visionary behind Breaking2. Since his start as a footwear wear-test coordinator, Bodecker has led Nike’s first Global Football business; started its Action Sports business; and served as its first Head of Global Design. Bodecker is currently the Vice President of Special Projects.

As VP of Footwear Innovation for Nike, Tony Bignell leads a team of product innovators to create performance footwear for athletes everywhere. Tony’s work is guided by the ethos of Nike Innovation: make athletes better, protect them and inform them. Tony and his team focus on gaining inspiration and insights from world-class athletes, and using this data to create innovative products that deliver maximum performance for everyday athletes.

Matthew Nurse leads the Nike Explore Team at the Nike Sport Research Lab (NSRL)— a multi-disciplinary team of researchers, scientists, and innovators focusing on biomechanics, human physiology, sensory perception and data science. Working with the broader teams in Footwear and Apparel Innovation, the NSRL helps bring disruptive products, platforms, and capabilities to market. Nurse earned his Ph.D. in Biomechanics & Medical Science, and has worked on more than a dozen patented product and digital concepts.

Wilkins, along with his colleague Brett Kirby, leads the day-to-day science behind Breaking2—from conducting athlete endurance tests to crunching lab data and identifying the optimal race strategy. As the Director of Nike Explore Team Generation Research in the Nike Sport Research Lab, Dr. Wilkins leads a group of scientists who are making the discoveries that will drive the next generation of Nike products. A physiologist, Dr. Wilkins has led scientific research strategy for a number of Nike’s products and projects, including Olympics and World Cup soccer apparel, the Nike+ FuelBand and the 2016 NTC and NRC apps.

Kirby explores new ways to help Nike listen to the body of the athlete. At Nike, his team helps discover insights that become the foundation for innovative new products and services. As a Lead Physiologist in the Nike Sports Research Lab, Kirby conducts pioneering research that unlocks better performance for every athlete.

Jones is Professor of Applied Physiology and Associate Dean for Research and Impact at the University of Exeter. The author of more than 230 research articles, Jones is a renowned expert in bioenergetics, muscle oxygen uptake and efficiency, exercise testing and human performance. A former international athlete himself, Jones has advised several of the UK's leading endurance runners, and has a special interest in training and nutritional interventions to enhance distance running performance.

Dr. Skiba is director of the Sports Medicine program at Advocate Lutheran General Hospital in Chicago. A medical doctor, Skiba conducts research on oxygen kinetics and the mathematics of athlete training and power production. He has also coached a number of world champion endurance athletes. Practicing what he preaches, Dr. Skiba has completed numerous triathlons, including Ironman USA.

Robby, President of winningAlgorithms, an artificial intelligence company based in Portsmouth, NH, uses predictive analytics to maximize athletes’ performance. Ketchell has worked at the forefront of sports and data science for the past decade. Ketchell's main focus has been on how environmental factors impact human performance from aerodynamics, physiology, and physics. He developed a software program called AvantCourse from his year's of experience working at the Tour de France as the Director of Science and Technology for a professional cycling team where he was known as the team's secret weapon.

Growing up as a sneakerhead in China, Geng never imagined that he would work on the forefront of performance footwear. Since joining Nike in 2013, he has done just that—creating cutting-edge shoe concepts for elite athletes. As a Senior Researcher in the Nike Sport Research Lab, Geng leads a team of scientists as they apply their vast knowledge to creating innovative, functional running footwear.

Hutchinson leads a team of innovators focused on listening to the voice of the athlete and creating the concepts and performance solutions, in this case, to make athletes faster over the course of the marathon.  The team is focused on the ideation through creation, manufacturing, sustainability, and methods of make. She is the Program Director leading the Breaking2 footwear across the Nike Explore Team. One of the original developers behind Nike Free technology, Hutchinson pioneered the concept of creating footwear that facilitates natural movement.

Stefan Guest leads a design team that is tasked with creating the next generation of Nike running product. The team focuses on making athletes faster through rapid iteration of bold performance solutions. A believer in “group genius”, Guest focuses on helping world-class designers collaborate. By maximizing both the function and the aesthetic of a running shoe, his team helps athletes achieve peak performance.

A lifetime runner and NCAA All-American, Schoolmeester has helped transform Nike Running. In 2012, he was part of the team that launched Nike Flyknit—a transformative technology in running—across North America. Before joining Breaking2, Schoolmeester was responsible for the innovation strategy in running footwear, including the release of the Nike LunarEpic Flyknit.

Steve Jackson has been involved with Nike Apparel since he joined the company in October of 2004 as an Apparel Merchandising Manager in Nike Pacific. Over the years, he has also held positions as a Senior Apparel Merchandising Manager and Business Director within Global Football Apparel. Always listening to the voice of the athlete, he has a passionate, energetic, and collaborative approach to apparel Innovation. Steve is currently the Innovation Project Director for the Nike Explore Team Apparel managing ‘Systems of Performance’ innovation projects for numerous key sport moments.

Jorge joined Nike in 2003, having previously worked as a space suit engineer at NASA. He specializes in thermophysiology, exercise physiology, human performance, sports aerodynamics and new technologies. Currently, Jorge is the Innovation Senior Researcher and leads the foundational efforts in sports apparel-related innovation.