These are the pacing and fueling techniques that will help to guide Lelisa Desisa, Eliud Kipchoge and Zersenay Tadese to the first-ever sub-two-hour marathon finish. 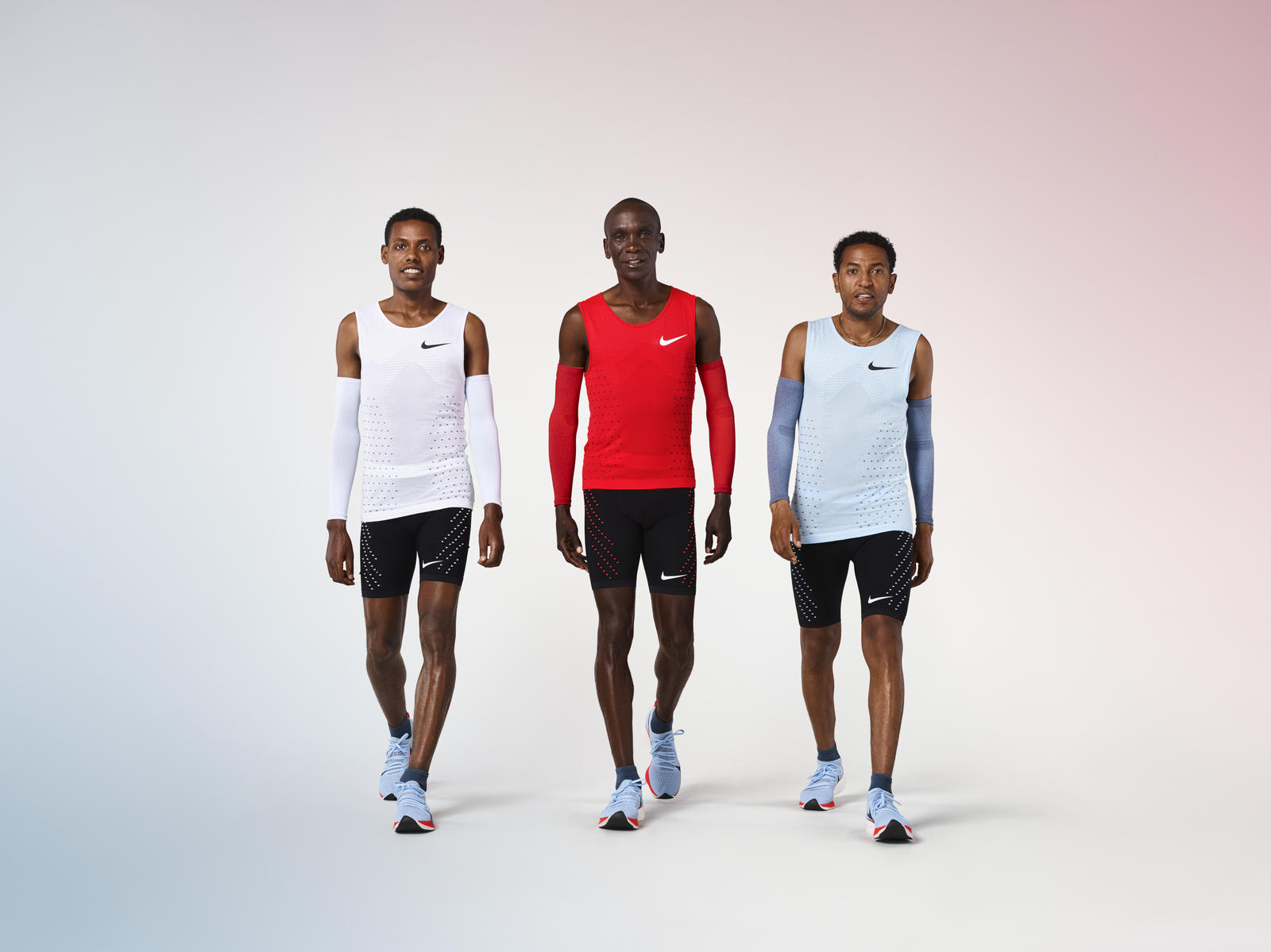 An electric car informs key information
In this attempt, pace is everything. To help Kipchoge, Desisa and Tadese remain aware of the pace they need to maintain to hit their 1:59:59 target, an electric car (that won’t blast the athletes with exhaust) will drive about six meters ahead of the pack, showing the race pace, the amount of time that has passed and the projected marathon finish time. “This is typical of most road races, but the Breaking2 lead car will update this info every 200 meters whereas other races typically update these stats every kilometer or 5K,” says Dr. Brett Kirby, researcher and lead physiologist of the Nike Sport Research Lab.

Pacers will help the runners keep record time
To break the two-hour barrier, the athletes can’t afford to go a second slower than they need to. That’s why a team of 30 pacers (made up of some of the world’s best distance runners, including Bernard Lagat) will aid the runners to a sub-two-hour race finish by running to help them maintain a steady race pace and by creating a wind divergence. Athletes were invited to join the pacer crew based on their running capabilities and temperament. “We needed calm, steady pace runners who can run the same speed repeatedly,” says Dr. Brad Wilkins, a physiologist and the director of Nike Explore Team Generation Research in the Nike Sport Research Lab who works with Kirby on all things Breaking2 science. 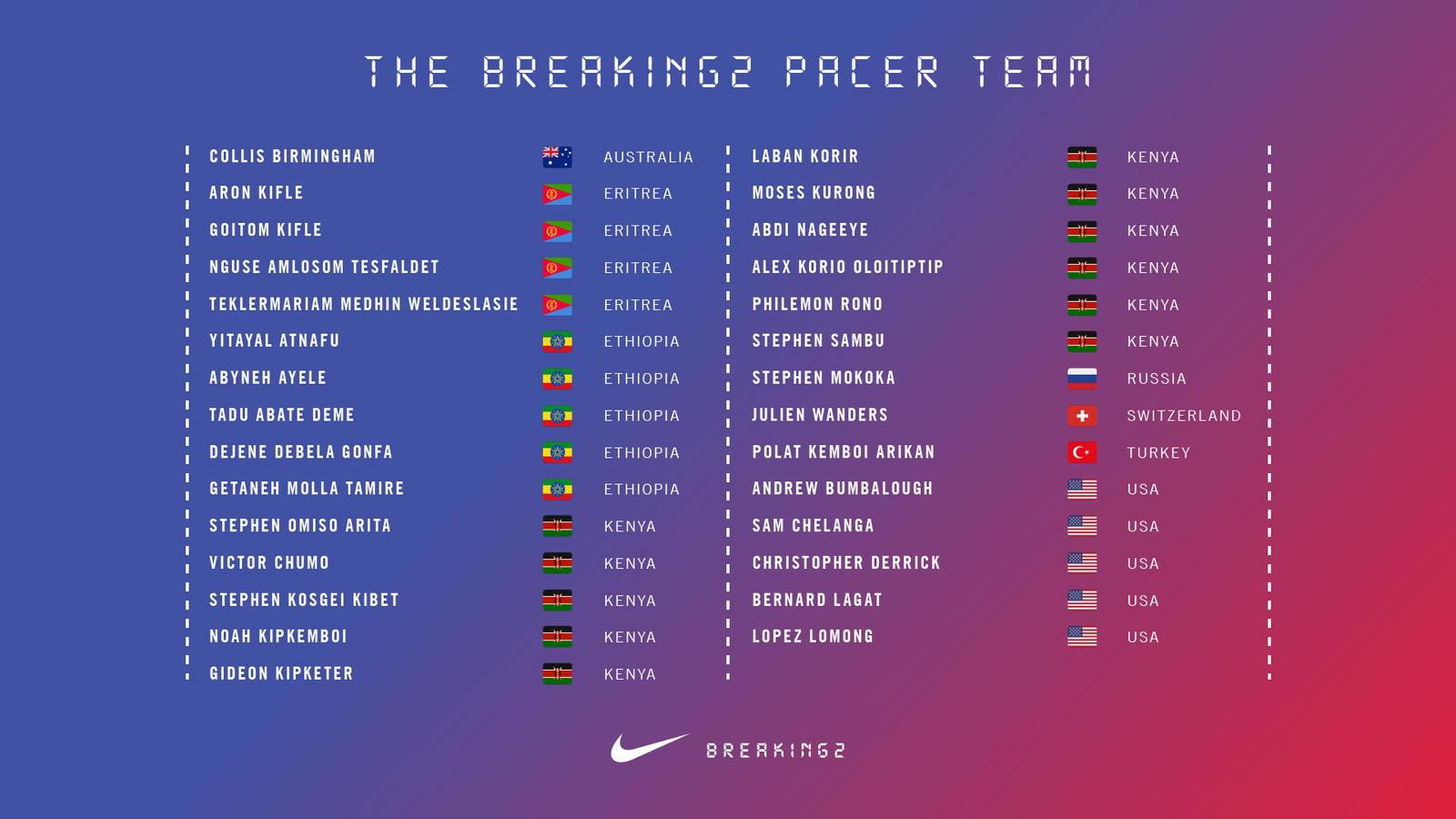 The three athletes (represented by the black dots) and six pacers (the red and blue dots) will line up together at the start and quickly fall into formation.

“We landed on the pacer formation based on wind tunnel experiments performed in fall 2016 by Nike Sports Research Lab at the University of New Hampshire wind tunnel and our collaboration with Winning Algorithms,” explains Kirby. “Coupled with computational fluid dynamics (for example, aerodynamics modeling), we chose the best formation of pacers to block the wind.”

Each pacer will cover two laps (having them run any longer than that may create pacer variation or elicit fatigue, which could make them less steady and more prone to tripping) and then make an exchange (at about 4.8 kilometers). Only three pacers will be entering or exiting the exchange zone at one time. The formation is complicated. “It’s a choreographed change-in that has to happen without us losing a second of speed,” says Kirby.

A pacer exchange will happen every lap. Once the runners cross the exchange start line, the three runners who will have just finished their second lap (represented by the red dots) will exit. The three pacers who will have just run their first lap (blue dots) will move forward to begin their second lap, and the three fresh pacers (green dots) settle in in a straight line in the middle to begin their first lap.

Individualized hydration will energize each athlete
Kipchoge, Desisa and Tadese have a personalized race-day hydration strategy that will help them offset fluid losses from sweating and maintain ideal cardiovascular performance needed to keep their record-breaking pace.

At each lap (every 2.4 kilometers) a moped handoff will deliver their specific bottles (if an athlete drops back, a table attendant will pass the fluid off to him) that contain a customized carbohydrate fluid mixture. There are 17 fluid bottles containing between 60 to 100ml for each athlete. Twelve to 14 of each of their bottles will contain a standardized drink. Three to five of each athlete’s batch will have a specialized mixture. “The total fluid volume in each of the special bottles is different from the others and they will have either a higher concentration of sugar or a different type of sugar or a sugar and caffeine combination,” explains Kirby.

Watch the live stream to see the action as it unfolds.