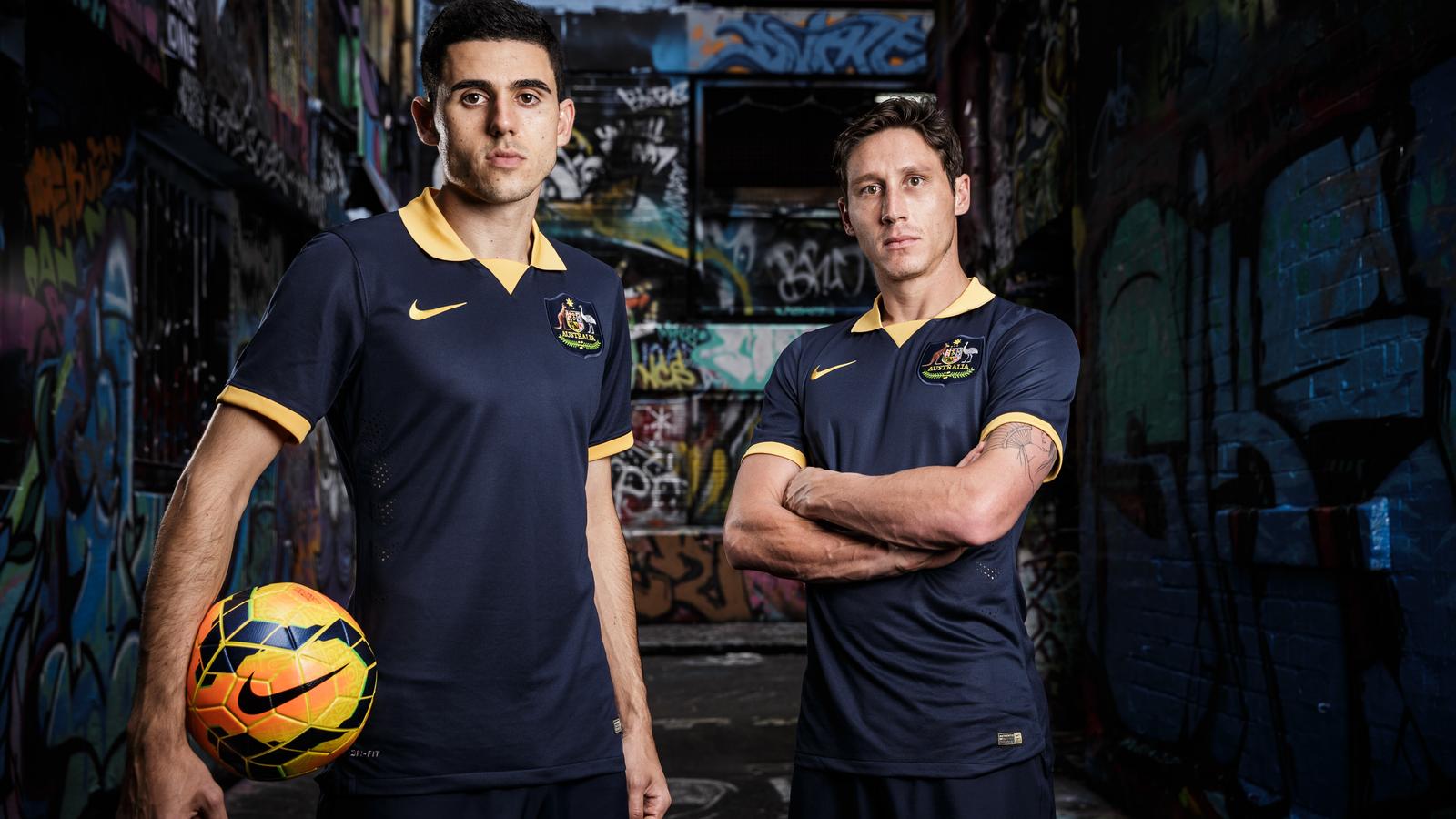 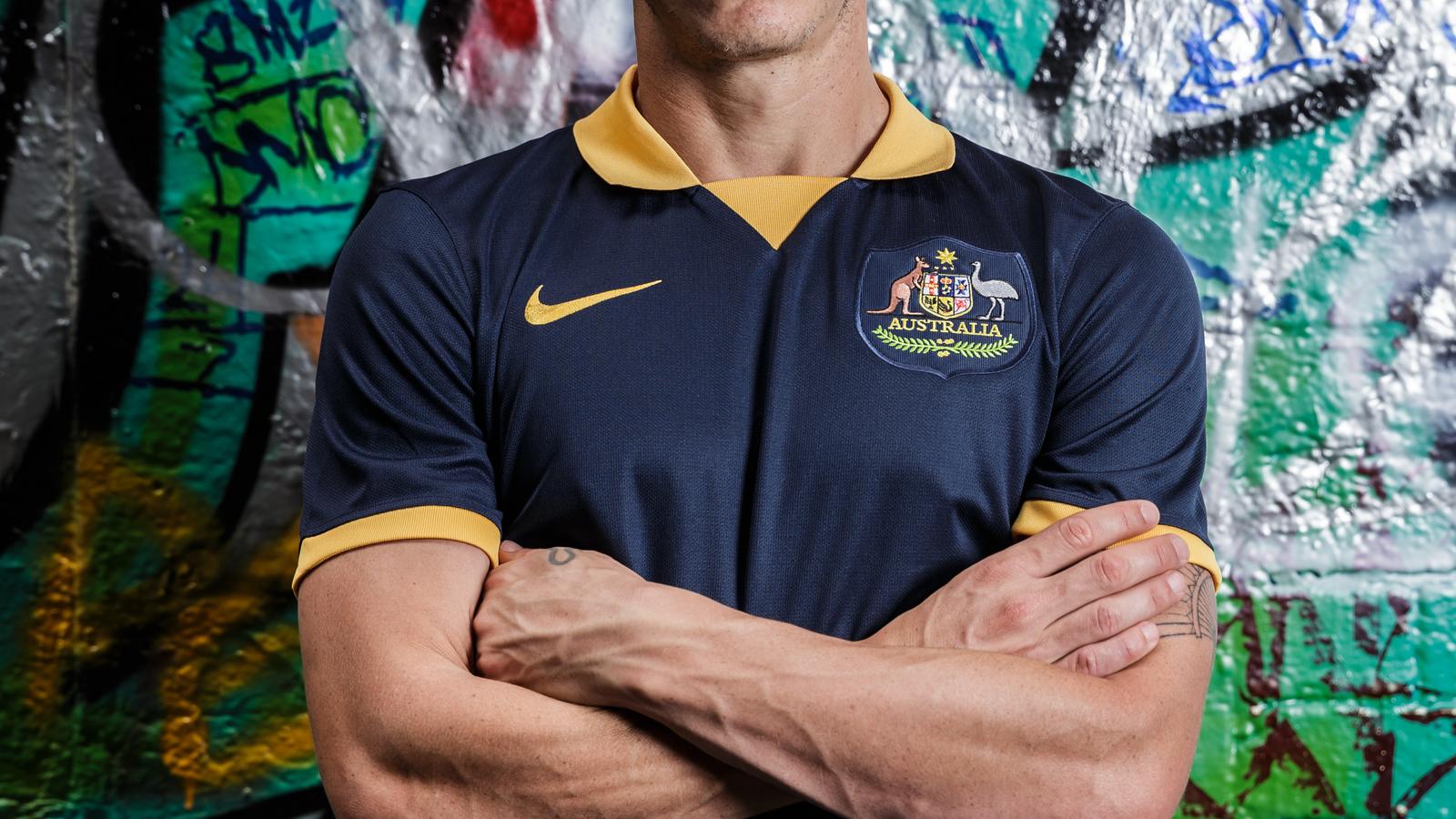 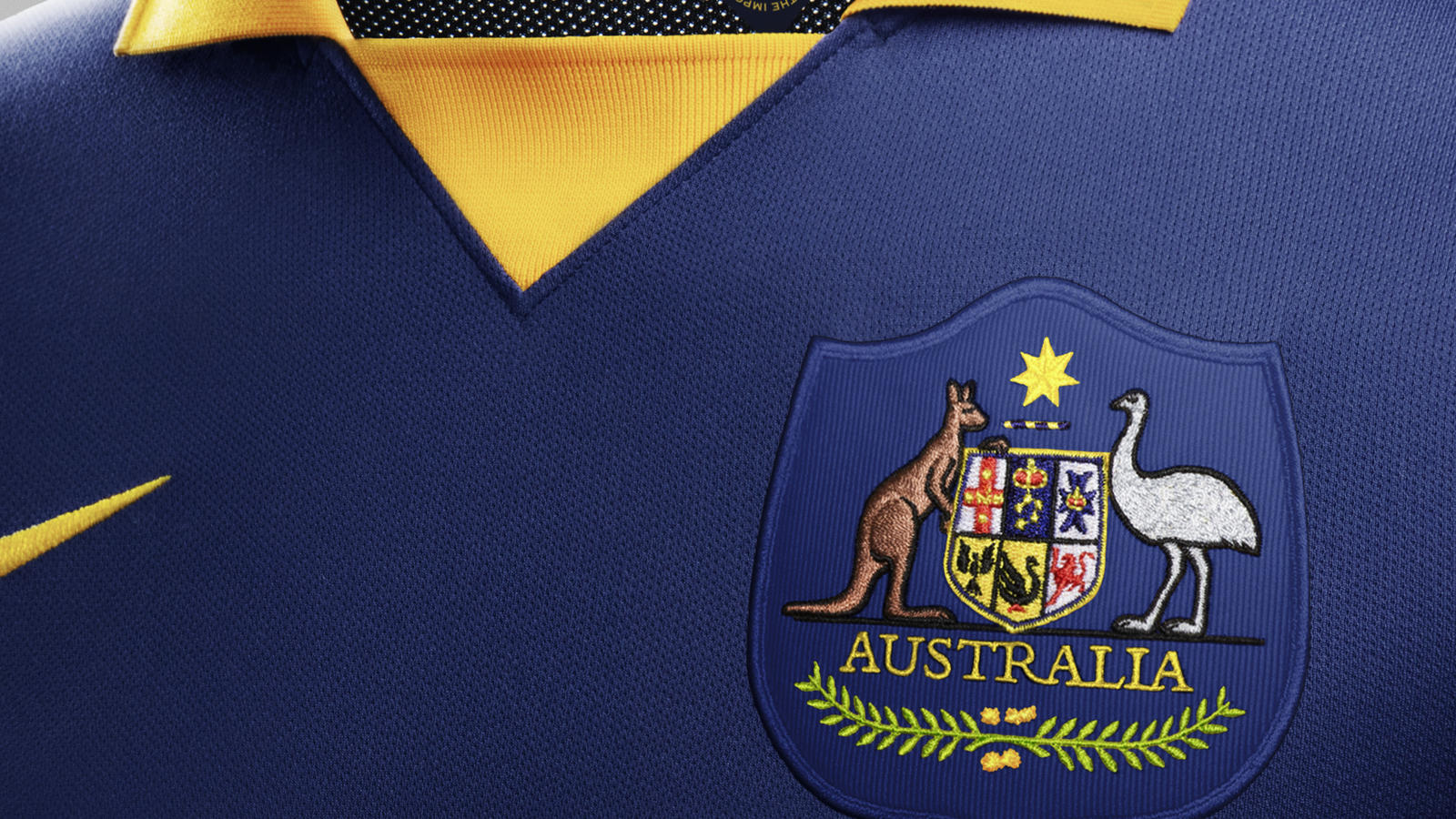 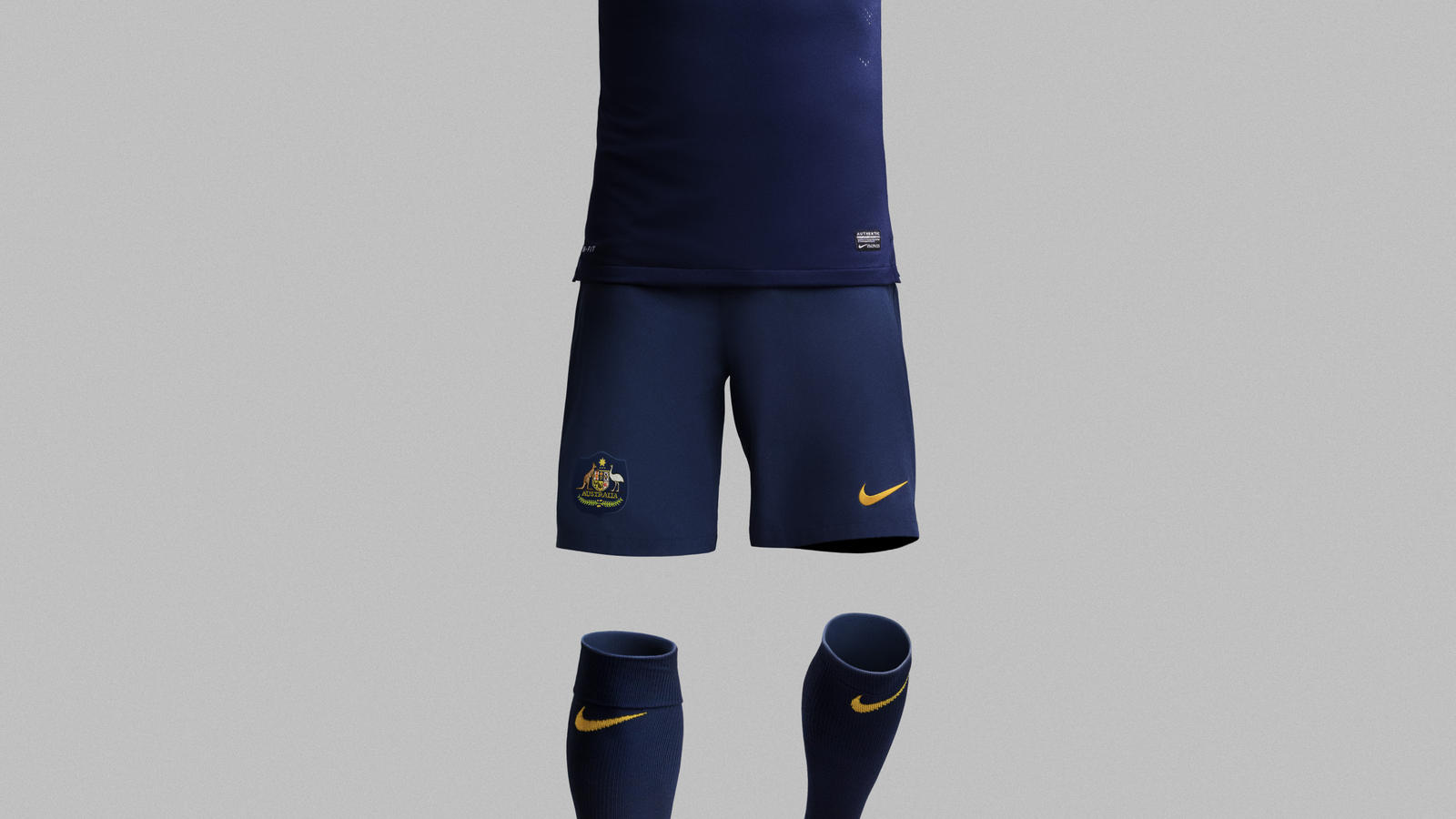 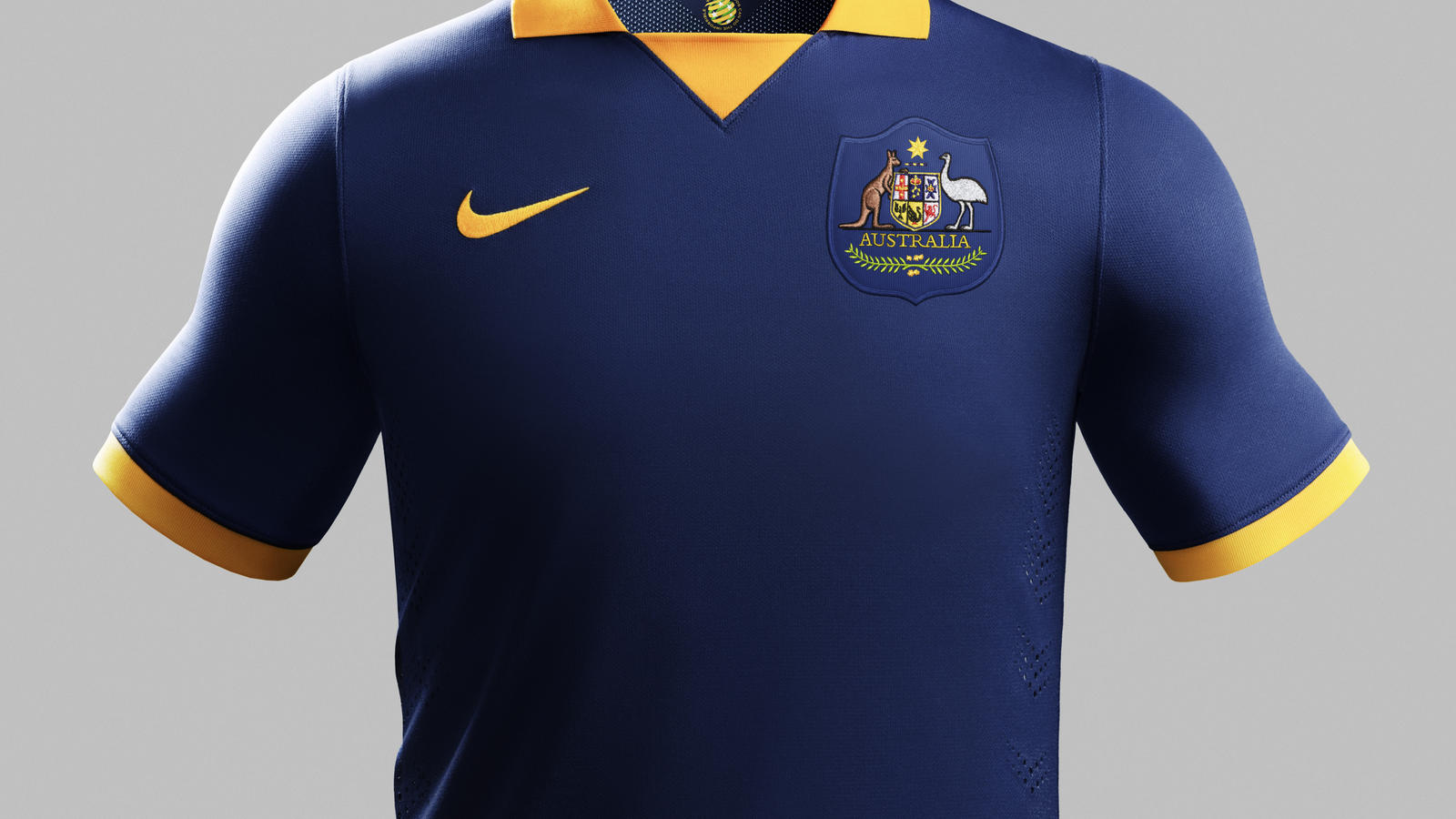 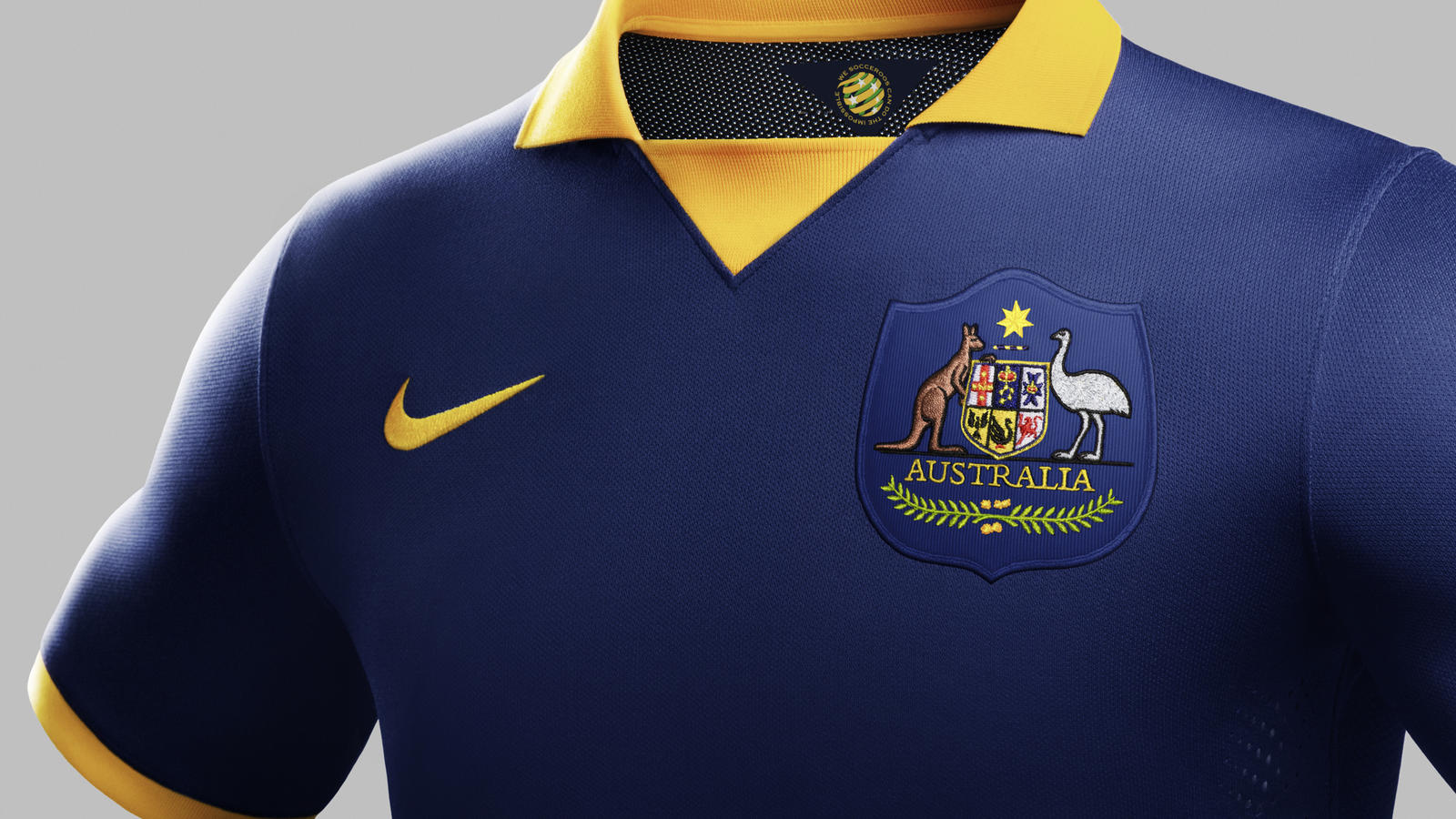 Australia and Nike unveiled the Socceroos' away kit for 2014, augmented with the best in performance innovation as well as design details that reflect the national team's proud football history.

“We are now used to seeing Australia at the highest levels of international competition as this will be their third consecutive appearance on football's greatest stage, and so we wanted to create an inspirational kit that looks back and pays homage to the first time they qualified for the world tournament. This new kit reflects the fighting spirit and pioneering can-do attitude of the 1974 national team,” said Martin Lotti, Nike Football Global Creative Director.

The new dark obsidian blue away jersey was inspired by the design worn by Australia when they qualified for their first-ever finals in West Germany 40 years ago.

The jersey boasts a stylish and modern yellow johnny collar, another reference to the iconic 1974 national team.

The design team placed the Australian coat of arms on the chest of the jersey within a new shield, replicating the shape of the crest worn on the jerseys at the 1974 tournament, and fulfills the players’ stated desire to “feel the history of our country.”

Inside the back of the neck, a woven pennant tab features the Football Federation Australia (FFA) logo surrounded by the famous and inspiring quote, “We Socceroos can do the impossible,” from Peter Wilson, the captain of the 1974 Australian national team squad.

“The team’s comfort and performance on pitch was clearly front of mind when designing the kit. The reference to the 1974 squad in the kit design is a reminder of the history and heritage of the Socceroos, which will give us added motivation in Brasil.”

The new away socks and shorts are also in obsidian blue. Simple and iconic, the shorts have a slimmer fit that is more tailored to the body with a cut specifically designed to aid movement and comfort. The center back of the shorts features Nike’s signature laser vents to aid in cooling and allow for moisture management.

FFA Chief Executive Officer David Gallop applauded the design and its recognition of the past deeds of the 1974 Socceroo heroes.

“The away design complements our home strip and allows the Socceroos to take on the world’s best in Brasil in a strip that shows respect to the past but also reflects the future in what is an exciting time for the Socceroos,” Gallop said.

The kit aids performance by helping to regulate player body temperature over the course of match. By using a combination of Nike Dri-FIT technology, “burnout” mesh and laser-cut ventilation holes, designers are able to localize cooling where players need it most.

Nike Dri-FIT technology pulls moisture away from the skin to the outside of the garment where it evaporates more quickly. Laser-cut ventilation holes and engineered mesh in key areas where heat is generated allow for increased breathability and airflow across the skin.

In addition to keeping players cool, the kit is made with a new dual-knit fabrication that incorporates cotton and recycled polyester for the best in moisture-wicking properties, while adding a softer feel and more flattering shape.

In line with Nike’s commitment to superior performance with lower environmental impact, the shirt, short - and for the first time in an Australian national team kit, the socks - all feature fabric made from recycled plastic bottles (100 percent recycled polyester in the shorts, 96 percent recycled polyester in the shirt and 78 percent in the socks). Each kit is made using an average of 18 recycled plastic bottles. Since 2010, Nike has diverted almost 2 billion bottles from landfills, enough to cover more than 2,800 full-sized football pitches.

While looking at every element of the modern football kit, Nike designers even paid special attention to the kit’s socks. Combining athlete insight and research with new materials and fabrications, the Nike Elite Match Fit sock for 2014 features a sleeker fit specific to football. Strategically cushioned zones provide comfort and protection at the big toe and ankle bones where the majority of impact occurs, while arch support locks down the foot to help prevent slipping. Material was also eliminated to enhance touch and decrease bulk, and flex grooves were added to the ankle and the top of the foot to prevent bunching.

Players have a variety of Nike Pro baselayer styles to choose from. These are designed for the varying temperatures and conditions athletes will encounter in Brasil, which are expected to range from high heat during mid-day matches to much colder temperatures in the southern locations during evening games.

“When we asked players to talk about the kind of protection they need during a match, they showed us scars and abrasions on their upper-back hip area from sliding,” recalled Lotti. “Several players showed us these same injuries so we set out to add more protection, while balancing the need for lightweight and breathability.”

The result is the Nike Pro Combat Ultralight Slider Short. Featuring increased and adjusted abrasion protection zones to match the athlete’s sliding pattern, the short is also 20 percent lighter than previous versions and made with 87 percent recycled polyester. Weight was eliminated through the addition of mesh for increased breathability, which also provides cooling where the athlete generates heat.

The new Australia kit will be available on nike.com from April 3.