Antonio Brown has played in seven NFL seasons (all with the Pittsburgh Steelers) and is widely regarded as one of the best wide receivers in the game. Considering he’s always been somewhat of an underdog — his nickname in high school was Boney Tony because he was so thin, and he wasn't selected until the sixth round of the draft — it’s a reputation the 28-year-old has worked incredibly hard to earn.

Still, he never lets himself get too comfortable. “I know there are people out there who want to bring me down,” says Brown. “And that’s just extra motivation for me to train smarter and harder so that I can give myself an edge.” 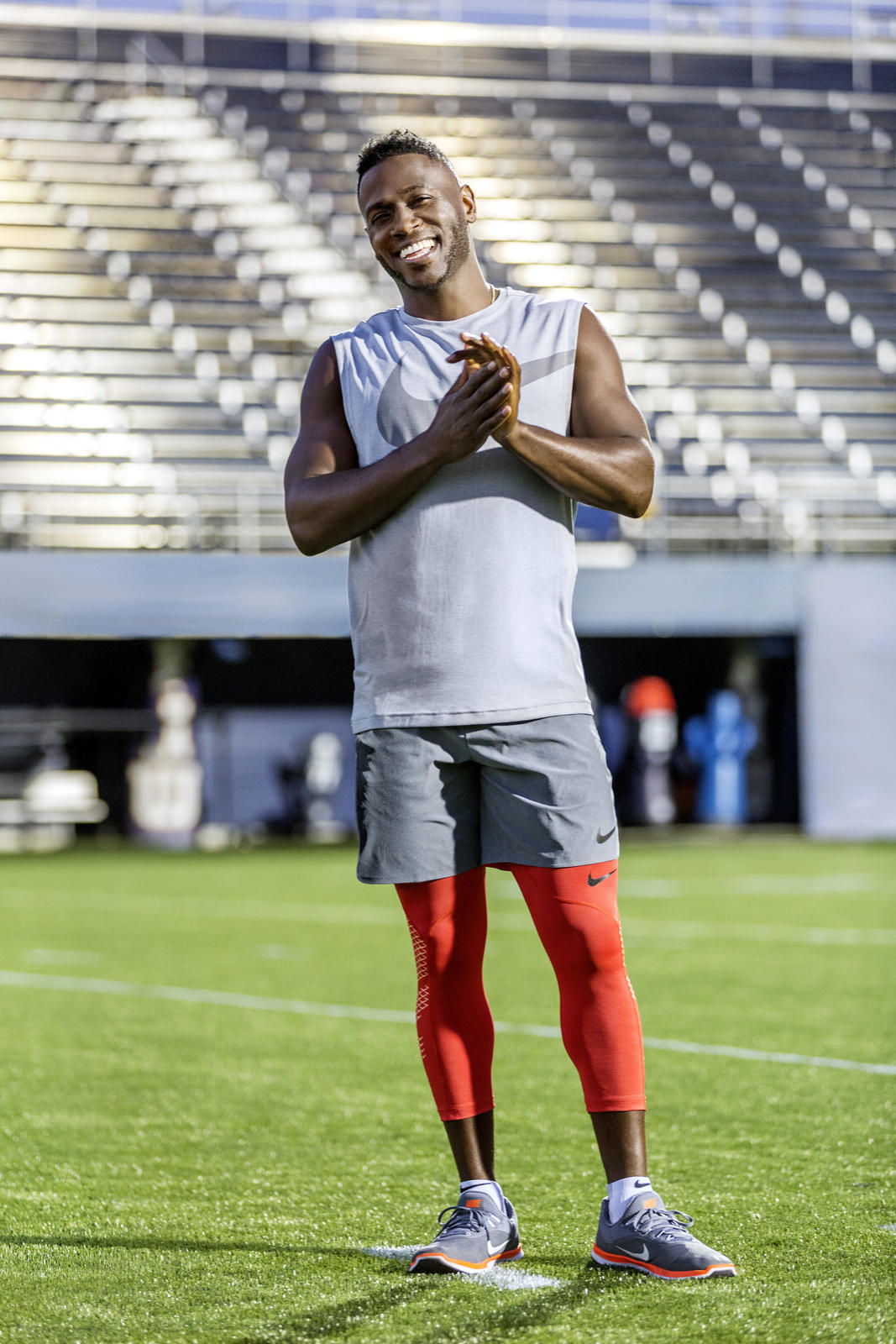 Brown credits fun and creativity during training sessions for staying at the top of his game.

As the key player in most passing plays, Brown needs to be able to catch a football from any angle. This obviously requires sharp hand-eye coordination. “Part of my training for that is getting my body in different positions and trying to catch the ball,” he says. That typically involves practicing over-the-shoulder catches, single-leg catches, turning catches and so on.

But completing a catch also demands complete core control. And sometimes using just one hand. That’s why Brown’s trainer, Cara Troutman-Enseki, focuses on strengthening his core in a destabilizing position, which is how she came up with the idea of having him hold a forearm side-plank while catching passes with his top hand.

“We use a football to make it sport specific,” says Troutman-Enseki, director of exertion rehabilitation for the UPMC sports medicine concussion program (she met Brown in January of 2016 when he came to her after getting a concussion and has been training him up to five times a week ever since). She has him do three sets of 15 reps per side once a week. “This allows us to work on destabilizing his core for up to five minutes,” she says.

Though nothing but his top arm moves while he’s executing it, the drill strengthens his whole body. “It works his entire core — the transverse and rectus abdominis, external and internal obliques and erector spinae — as well as the traps, delts, rotator cuffs, rhomboids, pecs, serratus anterior, glutes, quads and adductors,” says Troutman-Enseki. 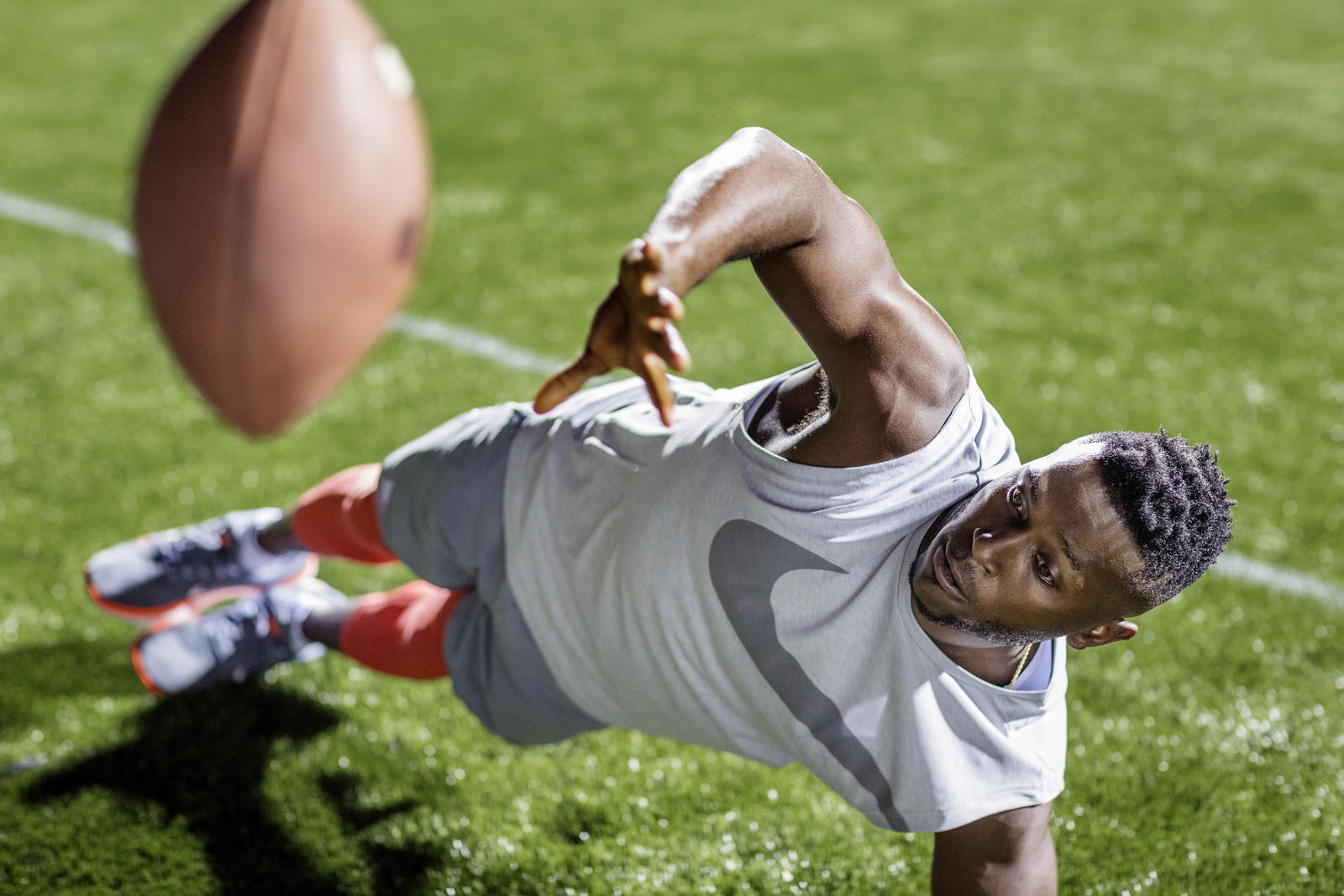 This single exercise works every major (and most minor) muscle Brown relies on to catch passes during games.

Because Brown is inherently competitive, he decided to take the side-plank catching exercise up a level and see how many passes he could catch and toss back in 60 seconds. The first time he tried it he caught 42. “It was exciting,” he says. His current record is even more exciting: 53.

Though Brown thrives on fun (he has said, “if it isn’t fun, it isn’t worth doing”), his side-plank catching challenge is so much more than a training game. Prior to the start of off-season training, Troutman-Enseki did a video running analysis and a functional movement assessment on Brown and found, among a few other movement inefficiencies, he had weak abdominal muscles. “The core is the athlete’s powerhouse,” she says. “It supports the upper and lower extremities as well as the cervical spine. Without good core strength, an athlete is not at the top of their game.”

Aside from getting his body in top shape, knowing he can catch 53 footballs in 60 seconds while holding a side plank gives him an important mental advantage on the field. “Proving to myself that my body can secure catches in a really difficult way time and time again gives me the confidence to know that I can catch the ball freely,” explains Brown. “It has made me an all-around better player.”

Still, he often reminds himself: “Never feel like you’ve arrived.” That mentality is what motivates him to outthink his opponents. It’s why he’s able to accomplish something as extraordinary as catching and throwing 53 football passes in 60 seconds while holding a forearm side plank. And it’s what will enable him to outperform himself and his opponents season after season.

You don’t have to be a pro football player to do — or benefit from — the side plank football challenge, says Troutman-Enseki. Excellent core strength is paramount for anyone who wants to be and feel better at sport. “If you’re a total beginner, just hold a side plank with both knees on the floor,” says Troutman-Enseki. “Progress it from there: lift your knees and straighten your legs, then raise your top arm, and then have someone toss a tennis ball to you, and work your way up to a football.” Share your progress or go at the challenge on social media using the hashtag #ABchallenge. For other core-strengthening workouts, visit NIKE+ TRAINING CLUB.