In the mid ‘90s Nike Running needed a recharge. The category’s early success had waned and its game changing Air Max franchise had not yet reached full potential. To change that the category leaders went all-in on young designer Sergio Lozano, who against all odds proved to be worth the risk. 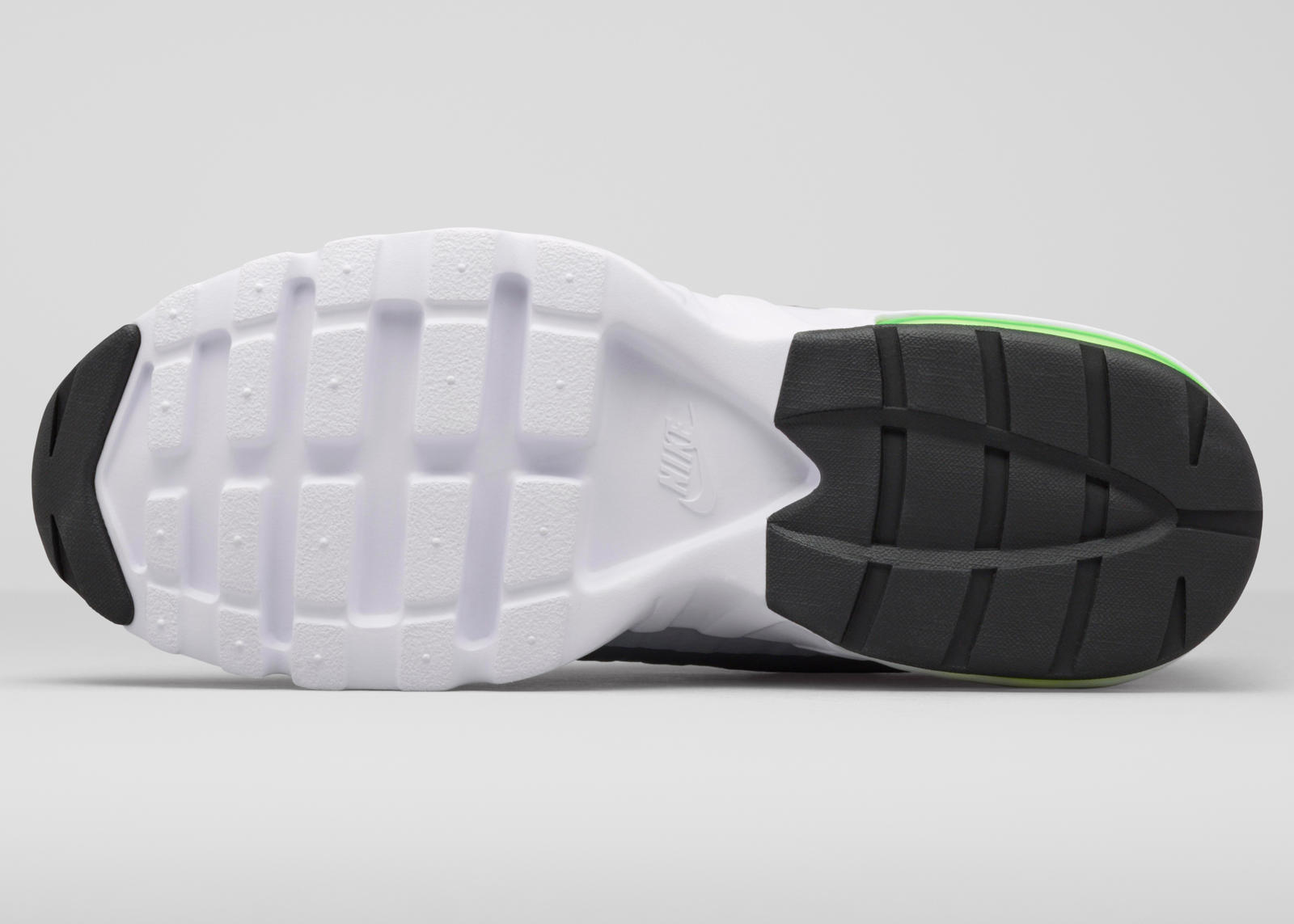 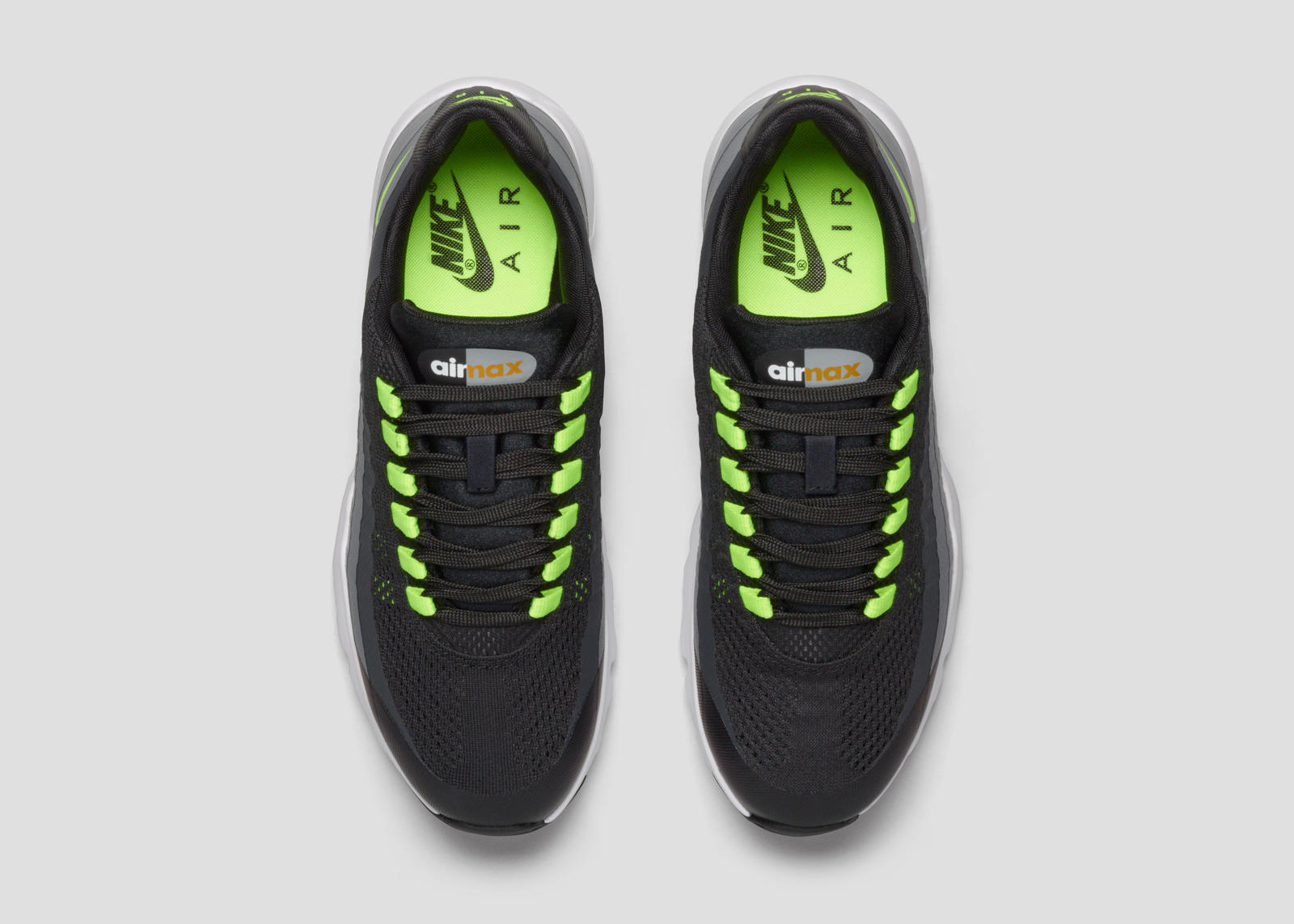 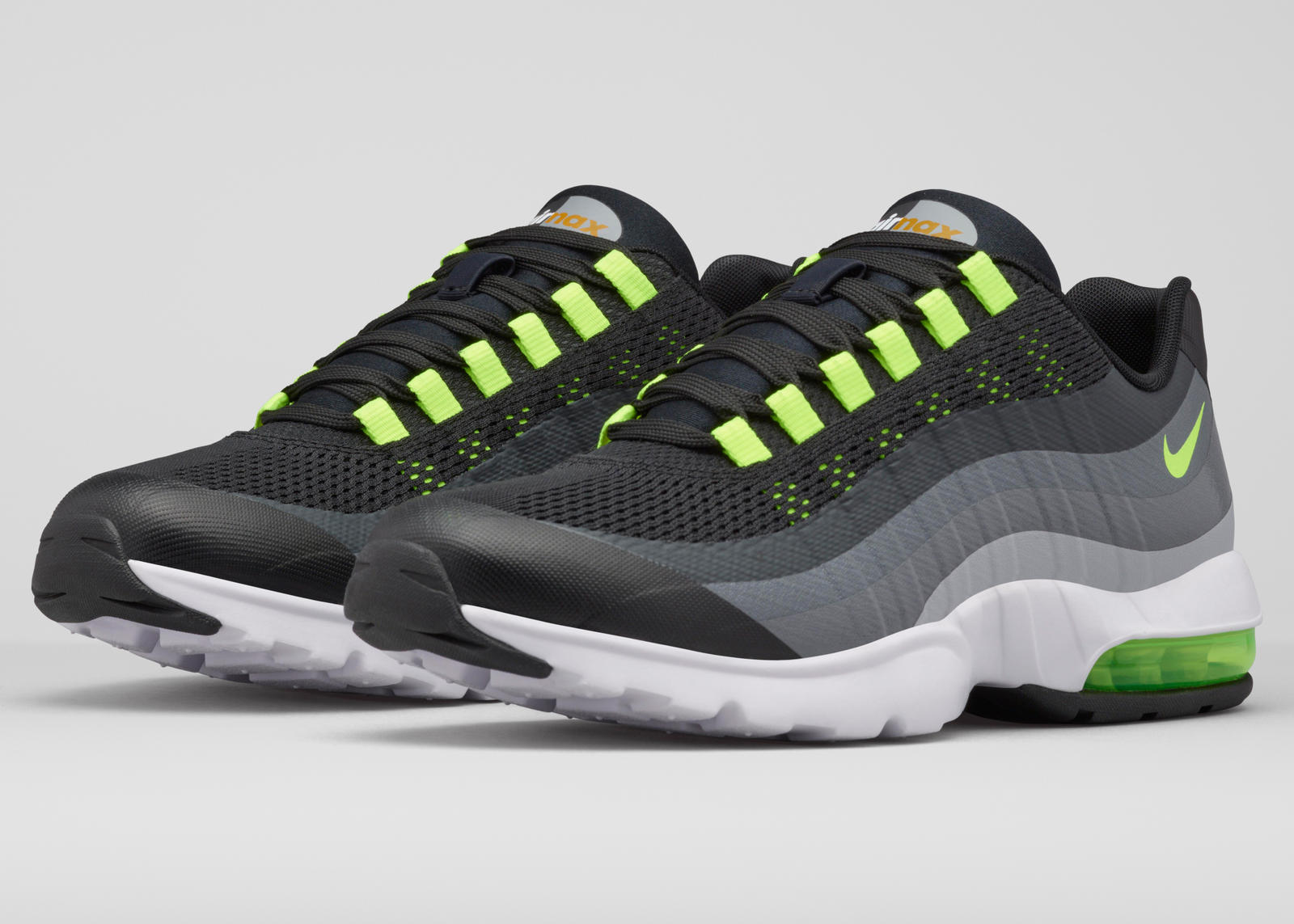 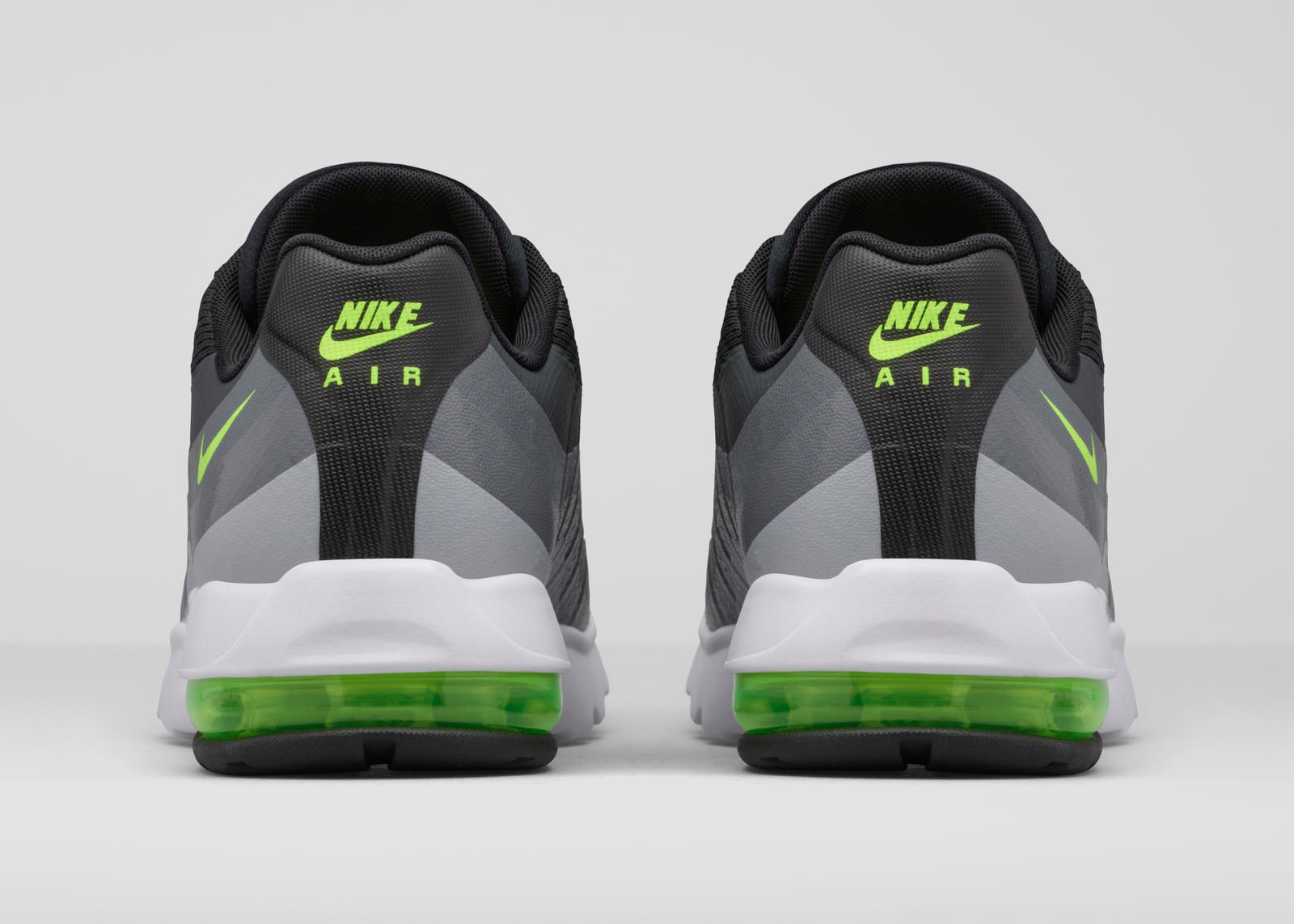 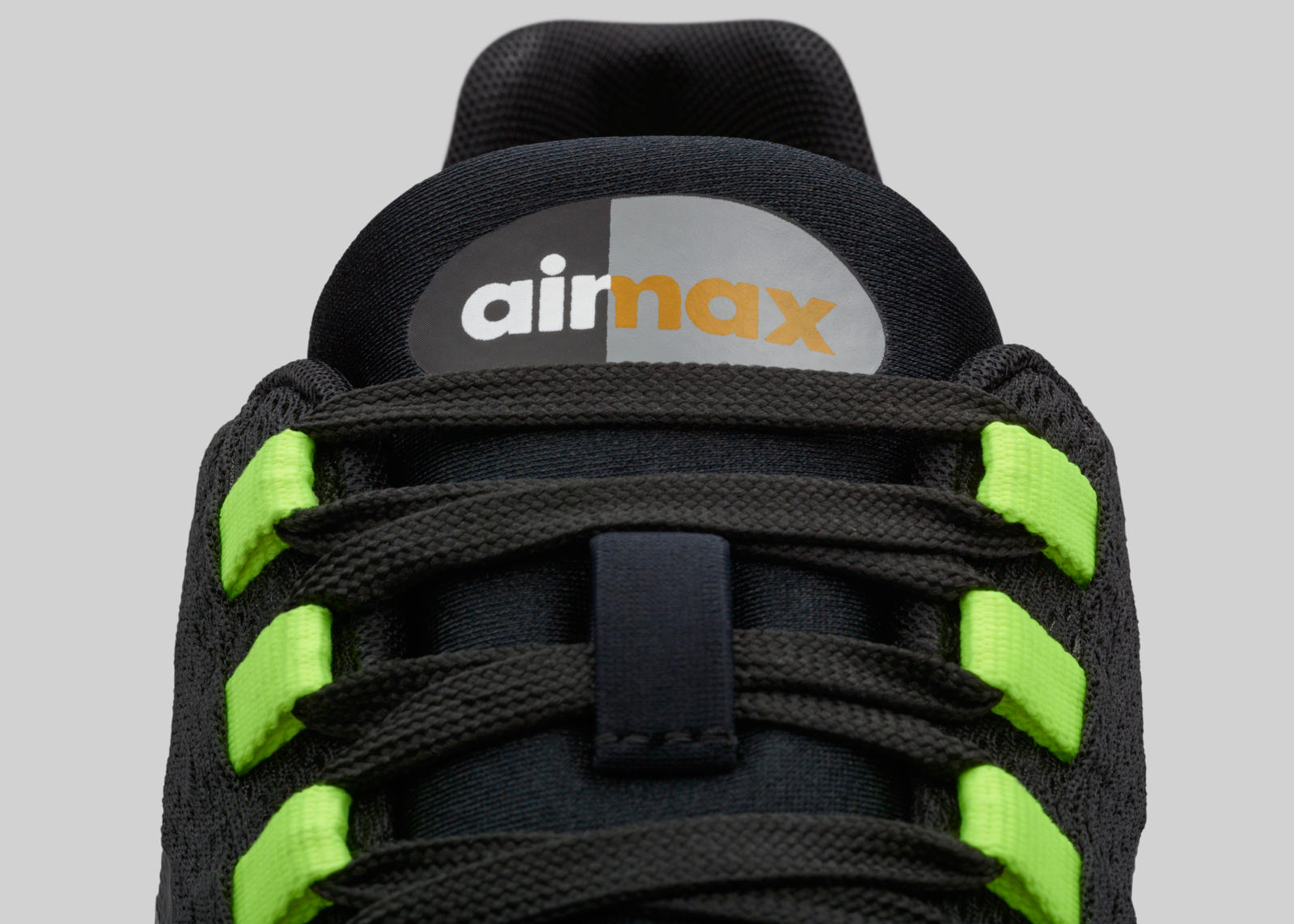 His creation, the Air Max 95, epitomizes the word different. No Nike running shoe before it featured a similar construction, color choice and, here’s the kicker, forefoot visible air. In his fourth year at the company, Lozano changed the very DNA of Nike running and ignited the imaginations of a new generation of designers.

To mark the twentieth anniversary of the Air Max 95, Nike celebrates with the release of two new models: The Air Max 95 Ultra Jacquard and the Women’s Air Max 95 Ultra. Both come from the hands of designers with strong connections to the original shoe and follow in the footsteps of Lozano by pioneering new methods of make. 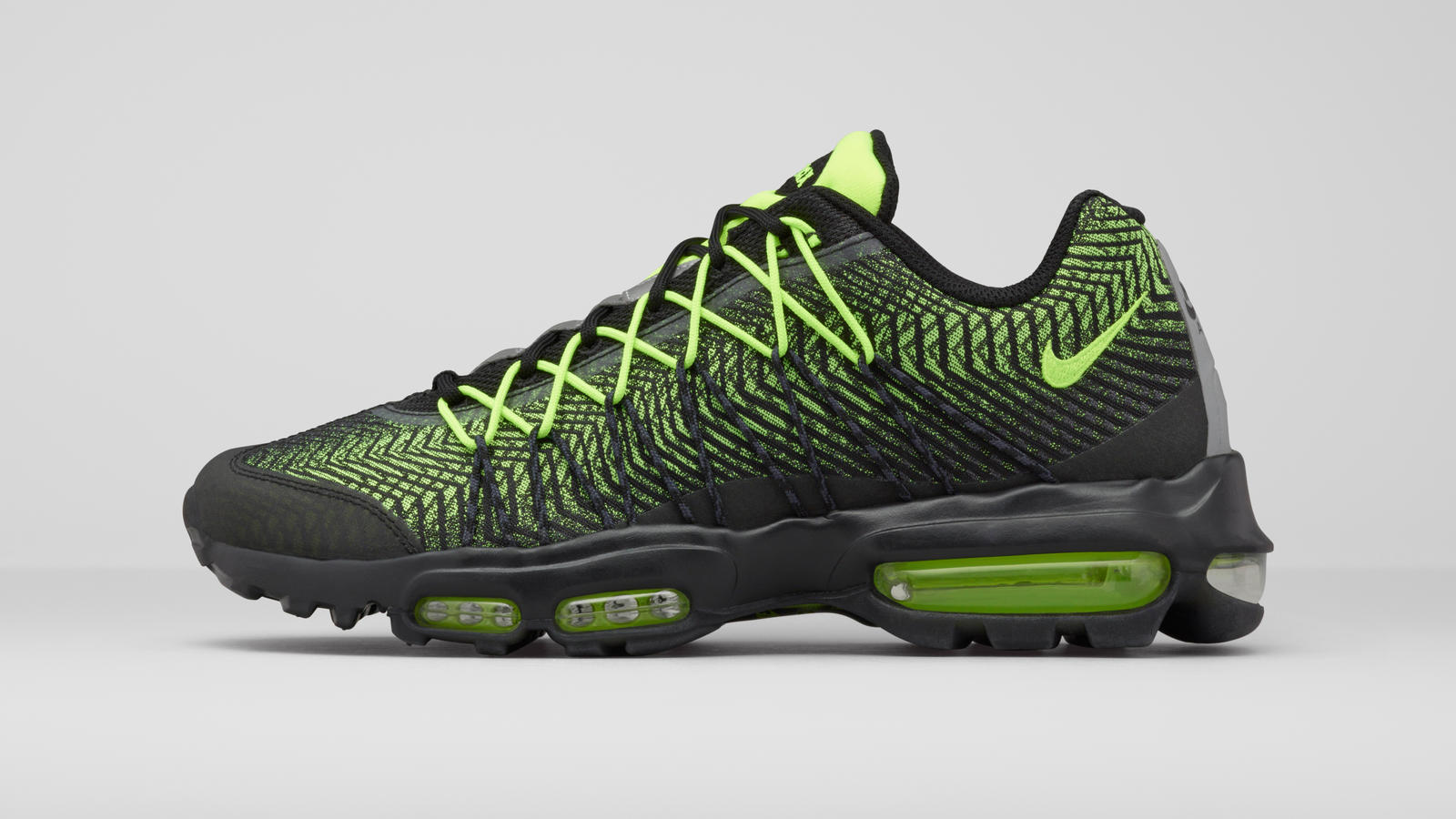 If you ask Nike designer Ben Yun what brought him to Nike the answer will be quick and without thought. Already a footwear designer, the Air Max 95’s design represented freedom of thought and expression. “I learned how to create shoes from a pattern engineer, a very old-school type of shoemaking. The way Sergio broke all the traditional rules amazed and inspired me,” Yun remembers. He looked at Nike as a place where designers were allowed to create without walls, a place where anything was possible. A year later Yun found himself in Oregon.

Hardly his first Air Max 95 project, Yun found himself tasked to recreate the shoe that brought him to Nike, something very different than anything he had done with the silhouette previously. “Most of my other Air Max 95 models involved applying new innovations and keeping with the iconic design of the original, like the Air Max 95 Engineered Mesh. The Air max 95 Ultra Jacquard is the one that really pushes the envelope.” 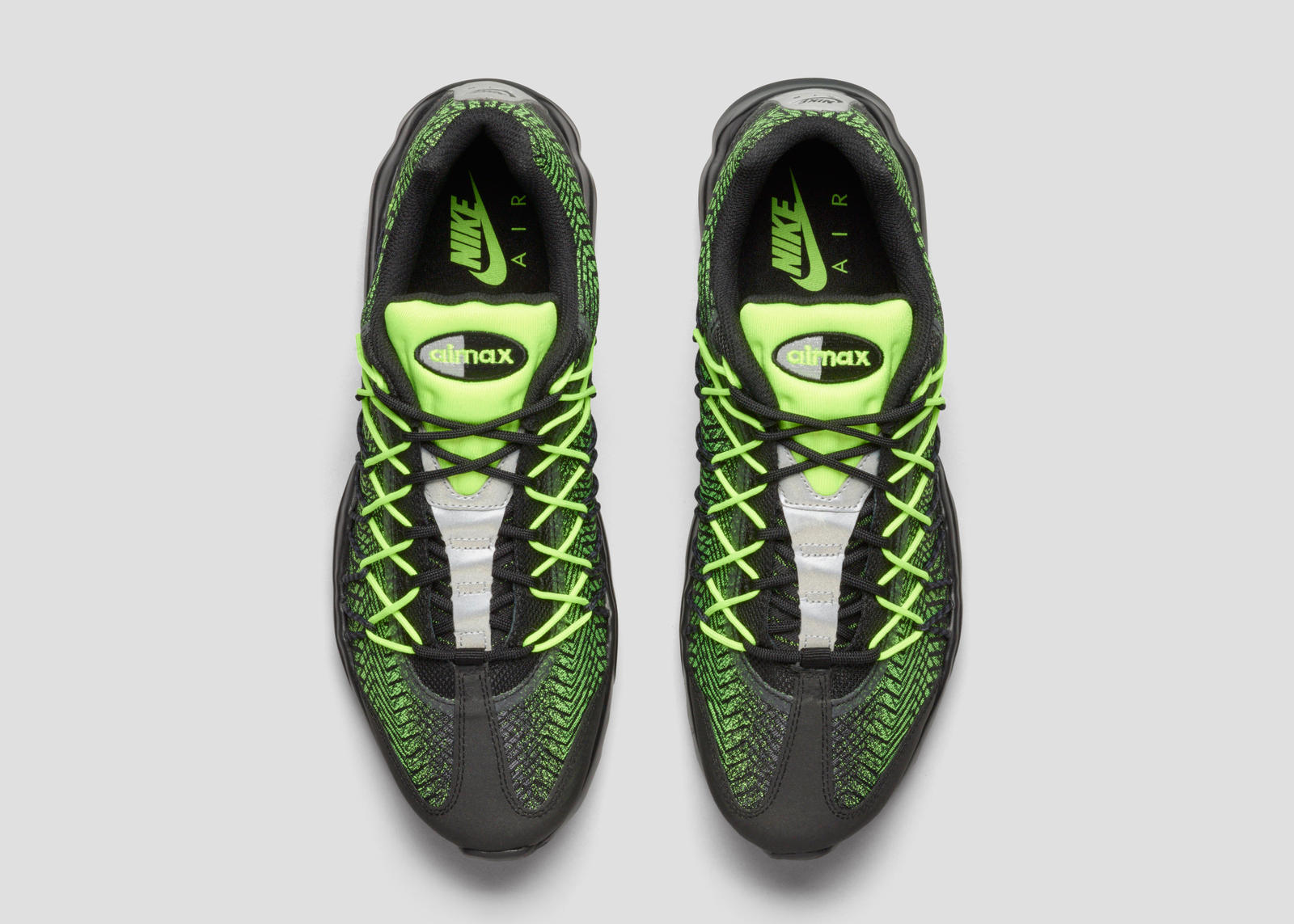 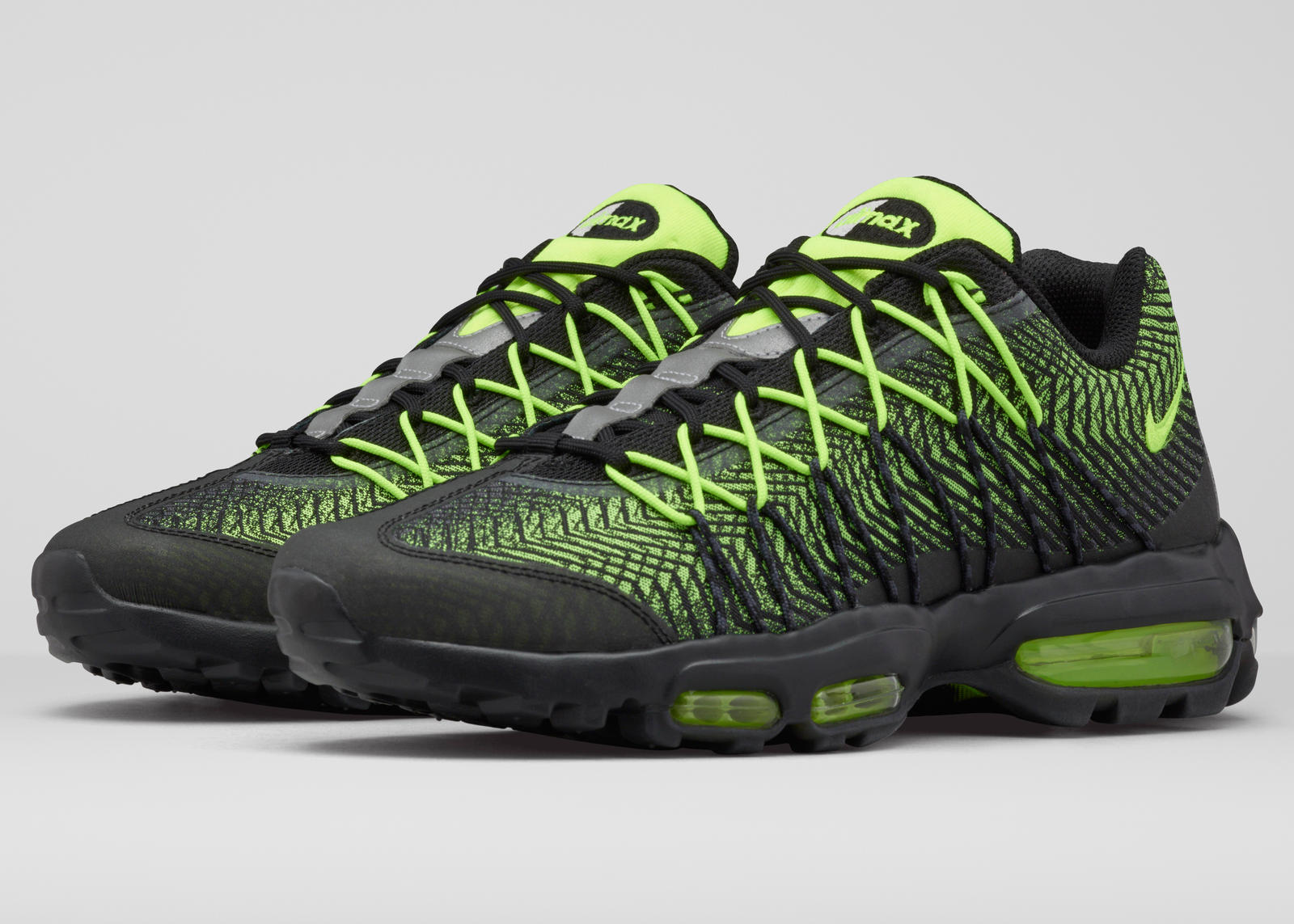 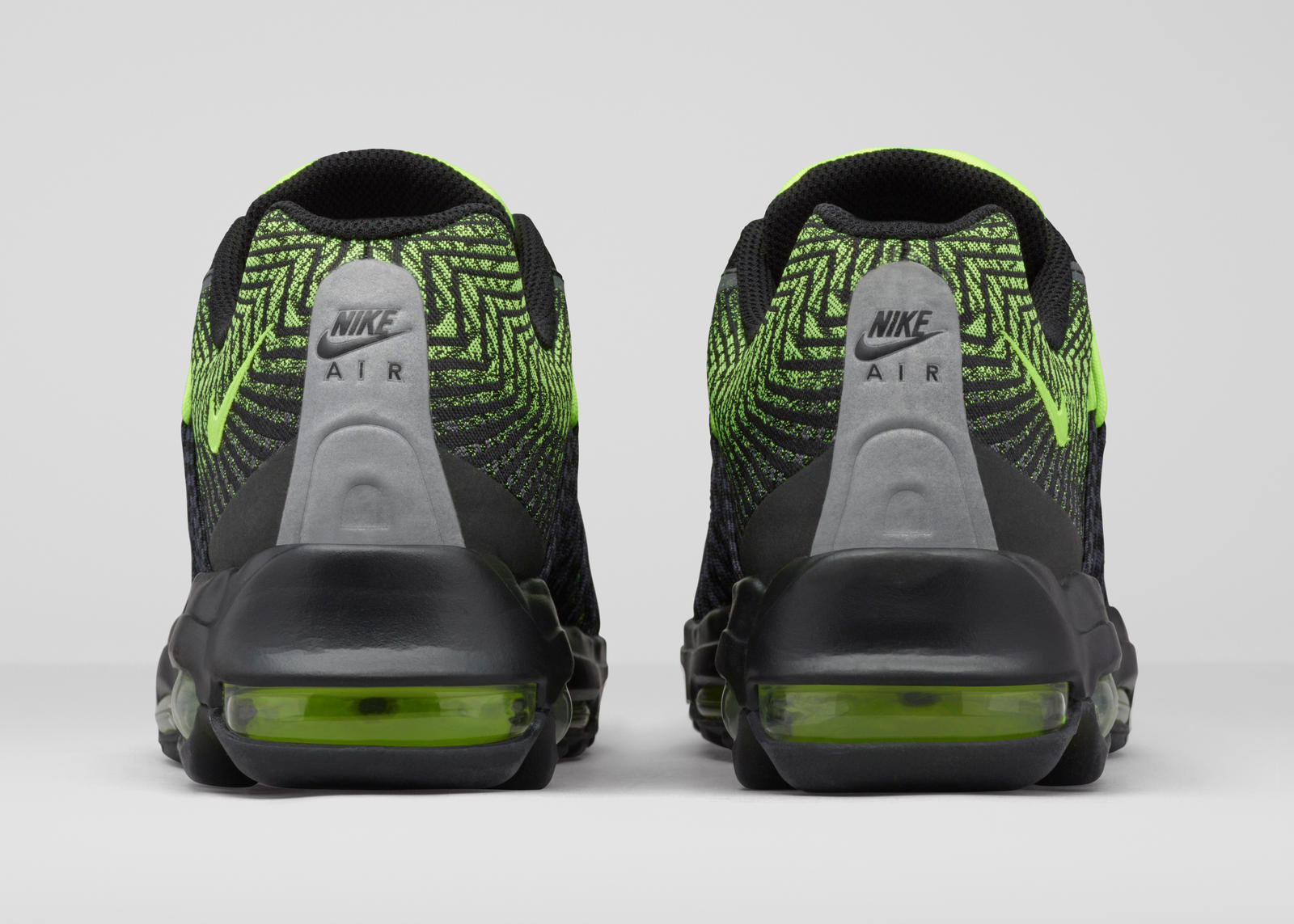 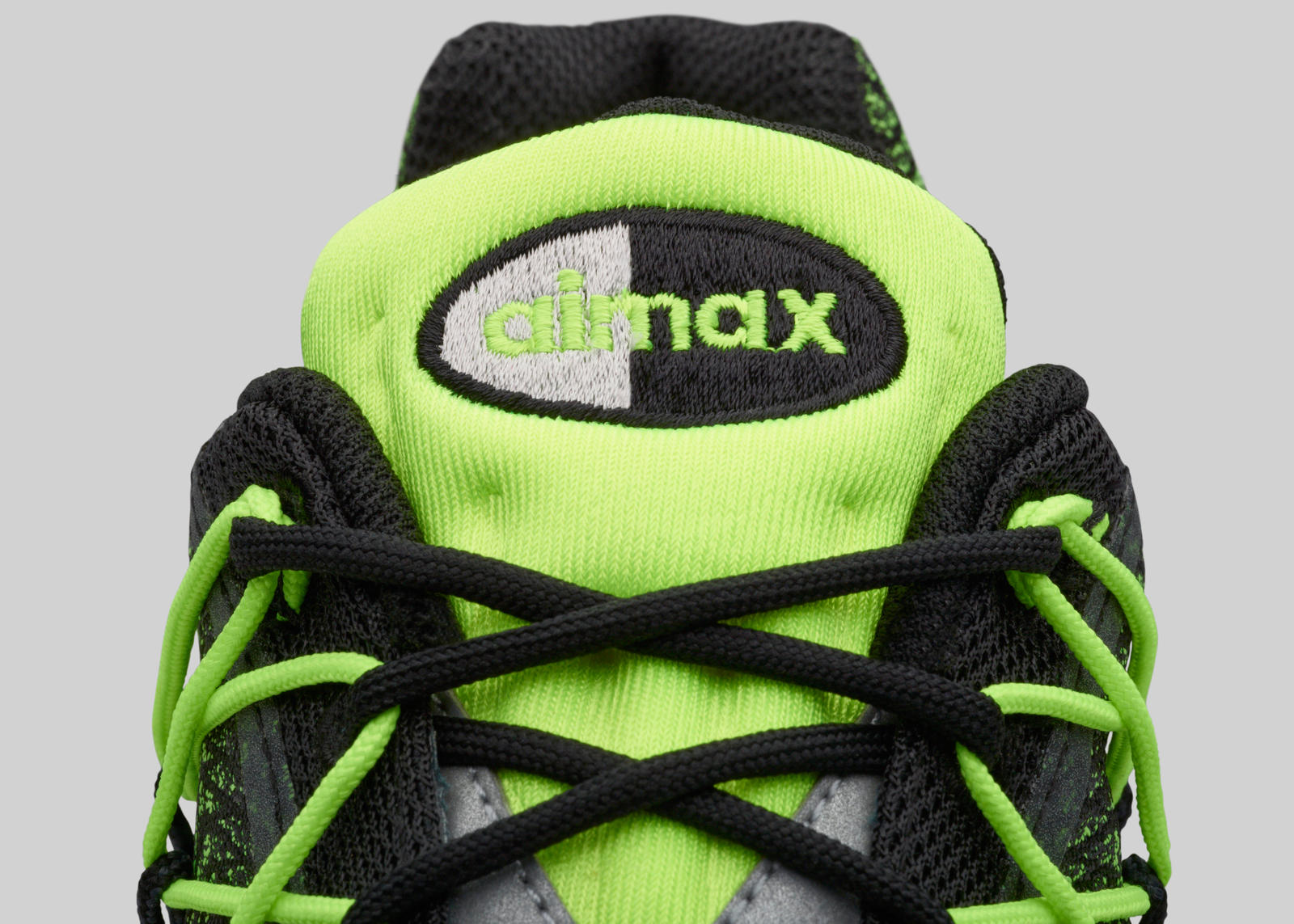 From upper to outsole the Ultra Jacquard is an exercise in refinement.

Deviating from Lozano’s vision on the upper, Yun utilized the age-old Jacquard weaving process on the one-piece upper to deliver the updated anatomy story in a single layer of fabric. Lastly, second generation Nike Flywire was applied as an update to the originals nylon webbing eyestays. “Human fascia is soft tissue. The second-gen Nike Fywire is dynamic and moves with the foot as it secures it inside the shoe. You could say they are the perfect match.”

The end result is a strikingly different yet familiar version of the Air Max 95 updated to fit the needs of an active lifestyle.

As the creator of the Nike Roshe One, Air Max Thea, and Air Max Ultra tooling, Nike designer Dylan Raasch knows more than a little bit about minimalist design. For the women’s specific Air Max 95 to celebrate the original model’s 20th anniversary, Raasch’s aim was to serve up a lower profile with a sleeker last. That meant drastically changing one of the main characteristics the Air Max 95: forefoot visible air. “It was important that we made it look close to the original, even though we had to remove the forefoot Air-Sole unit,” Raasch says, explaining the painstaking process of keeping his new creation as true to the original as possible.

Initially the plan was to keep the iconic dual Air-Soles. However, since the Air Max 95 Air-Soles only come in one size the forefoot had to be compromised in pursuit of the refreshed design direction. The exclusion eliminates excess material. A less is more philosophy also applies to the upper, “Using no-sew films we were able to get the six upper panels down to one layer without sacrificing the iconic gradation,” says Raasch.

Further differentiation from the original comes from twisting the shoe’s color scheme. Here, the iconic gradation is reversed, beginning with black on the uppermost portion of the shoe and transitions to lighter shades moving downward. A clean white outsole finishes the look. Ironically this color scheme was one of the few ideas put forward by Sergio Lozano, the designer of the original Air Max 95, as he navigated the push back toward the use of a black outsole. 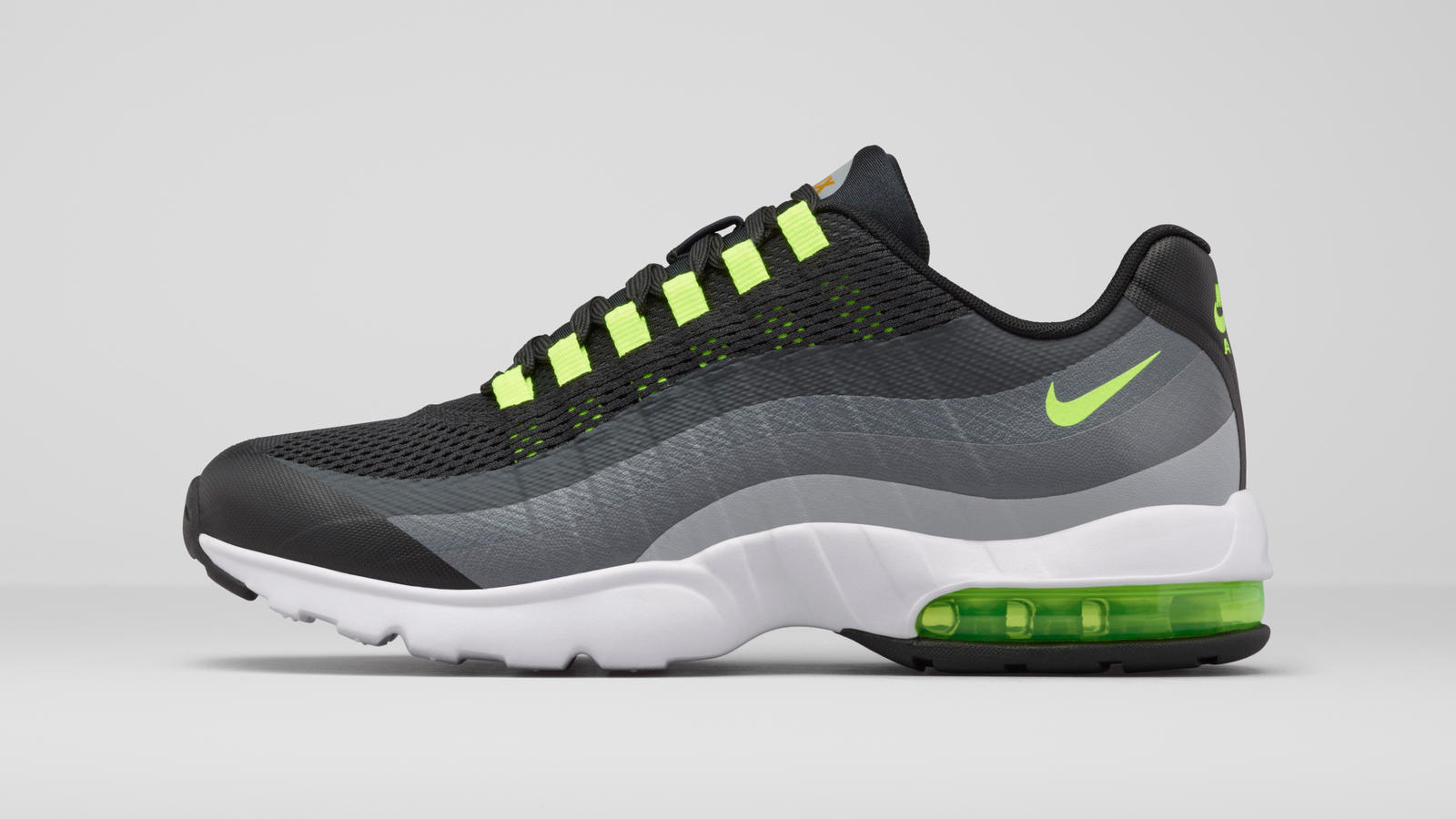 Although the Women’s Air Max 95 Ultra looks similar to its forefather it is definitely cut from a different cloth, updated with innovations conceived to make everyday life a little more enjoyable.