Anatomy Of Air: The Air Max 95

Two decades have passed since the Air Max 95 debuted. The performance running paradigm shifter, with its distinctive pop of neon yellow, radiated a rare confidence, as if aware of its soon-to-come acclaim. Looking nothing like the products merchandised around it, the shoe demanded immediate attention. 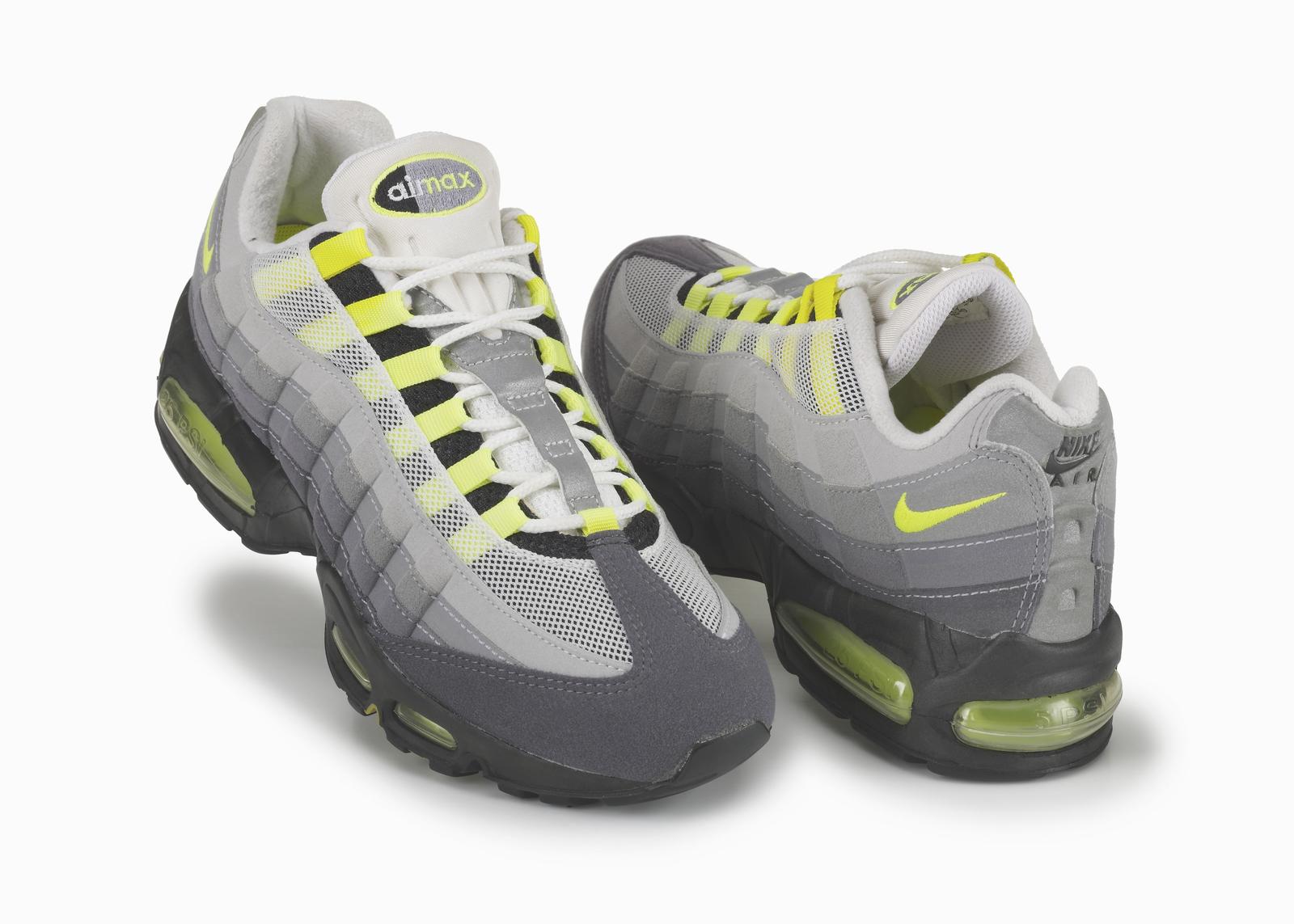 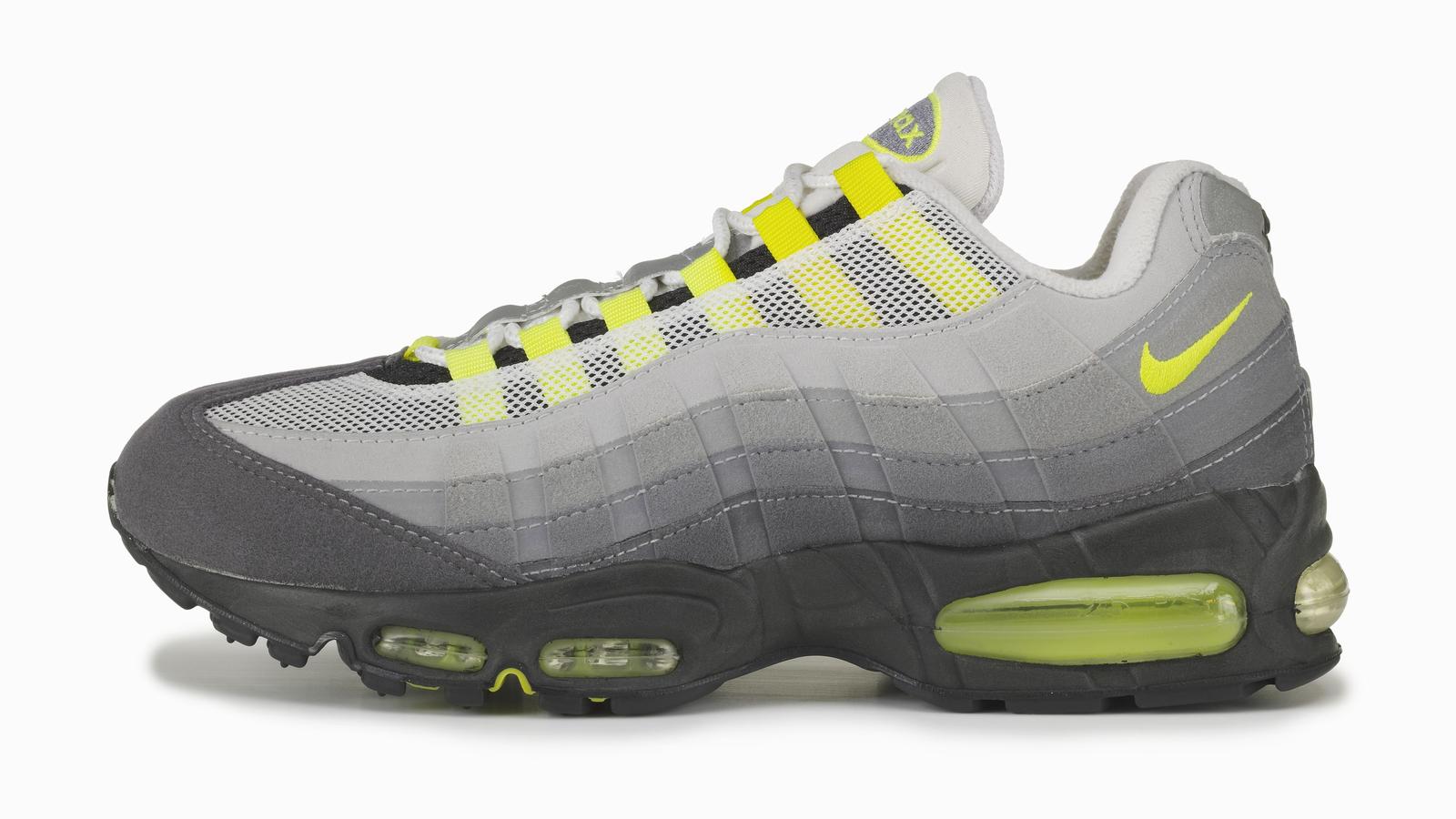 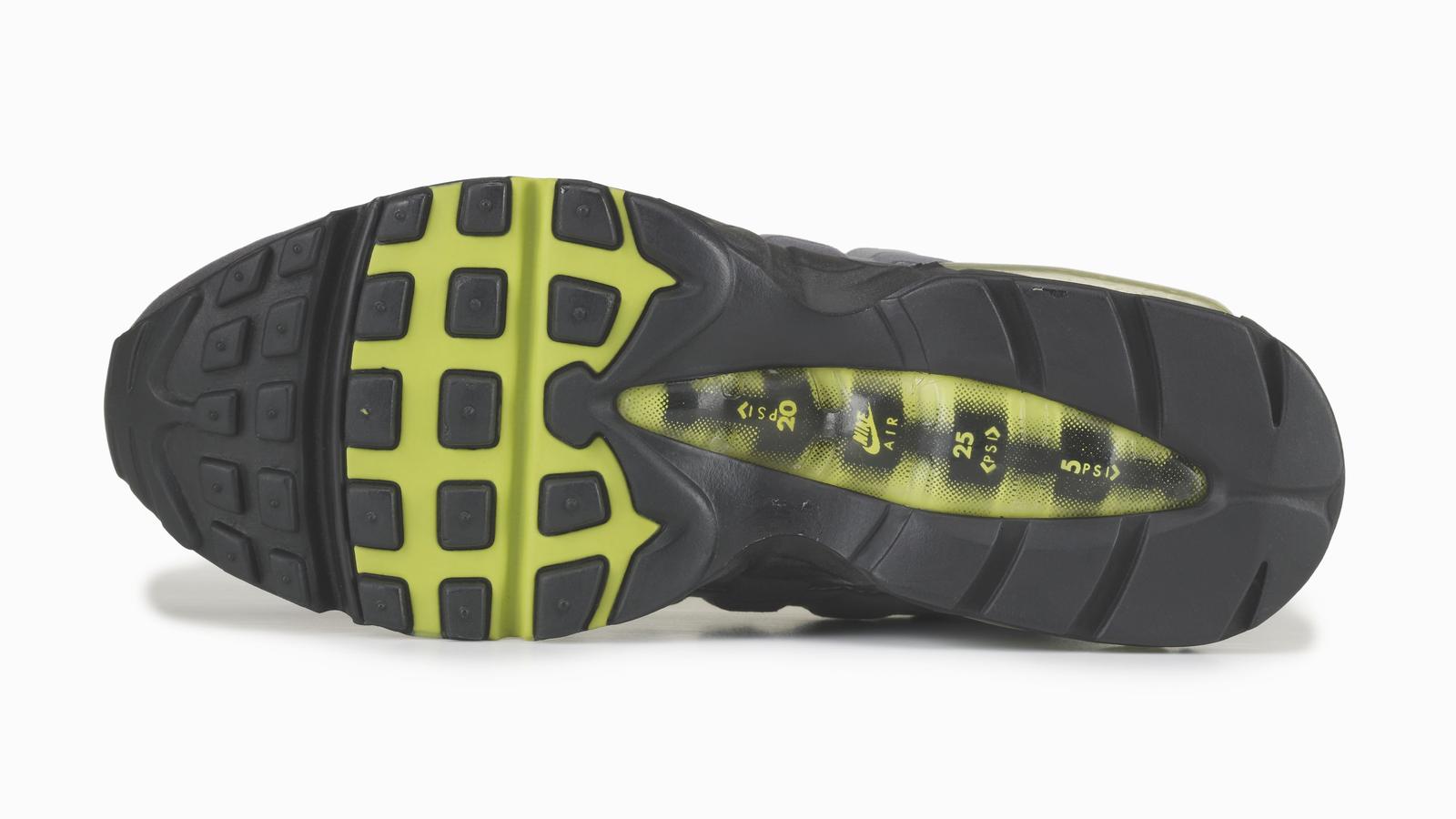 The source of that assurance was Nike footwear designer Sergio Lozano. From the day he was recruited to work on the Air Max project, strong faith in himself and his team carried the Air Max 95 through countless reviews and into production. It was not easy.

Similar to the Air Max 1, Lozano’s design met its share of resistance. “The first concept review for the Air Max 95 wasn’t a success across the board, some people thought it was good and others didn’t like it at all,” Lozano recollects while discussing the obstacles he faced while designing the Nike Air Max 95.  But thanks to a supportive team, he followed through on his vision and created a sneaker with a legacy worth the Air Max family name. “There were some great champions who stood behind the idea and without them the shoe wouldn’t have been made,” Lozano humbly states.

“The first concept review for the Air Max 95 wasn’t a success across the board, some people thought it was good and others didn’t like it at all.” – Sergio Lozano

By ‘90s Nike Running’s cool had ceded to the rise of Nike Basketball. With hoops coming into its stride, imagining a generation-defining vision of sport style, the running team knew it had to keep up.  The Air Max 95 project was positioned as a way to re-capture the energy that surrounded the category during the late ‘70s and early ‘80s. It had to be bold, provocative, and unlike anything ever produced in the space. “The running team wanted to mix things up a bit, they wanted to take a risk. I guess I was that risk,” Lozano recalls.

Prior to 1994, Lozano had yet to work on running product. Up until this point, his main focuses were tennis, training and ACG. The sudden change was no surprise. The Nike design community was much smaller back then and working on a wide array of categories was standard operating procedure.

Only four years into his career with Nike, a young Lozano was enlisted to lead the newest Air Max project but in actuality his conceptual journey had already begun. One rainy afternoon, well before he was ever recruited for the Air Max project, Lozano found inspiration while taking in the Beaverton scenery. “I was looking across the lake out into the trees and I began picturing the process of rain eroding the earth and thought it would be interesting if the perfect product was unearthed by erosion,” Lozano remembers. He drew a quick sketch, featuring striations similar to those found on the walls of the Grand Canyon, and stashed it in his idea drawer. 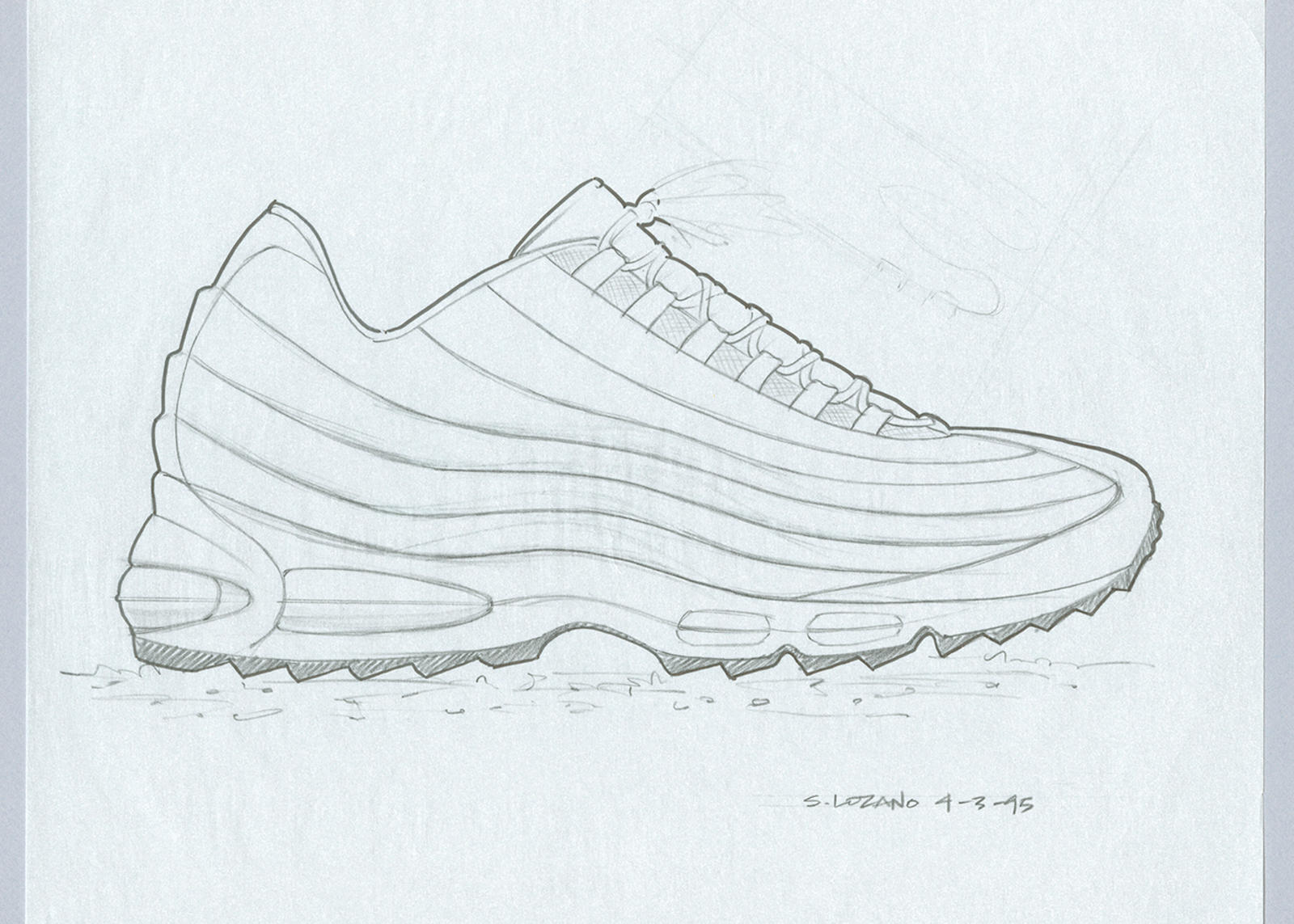 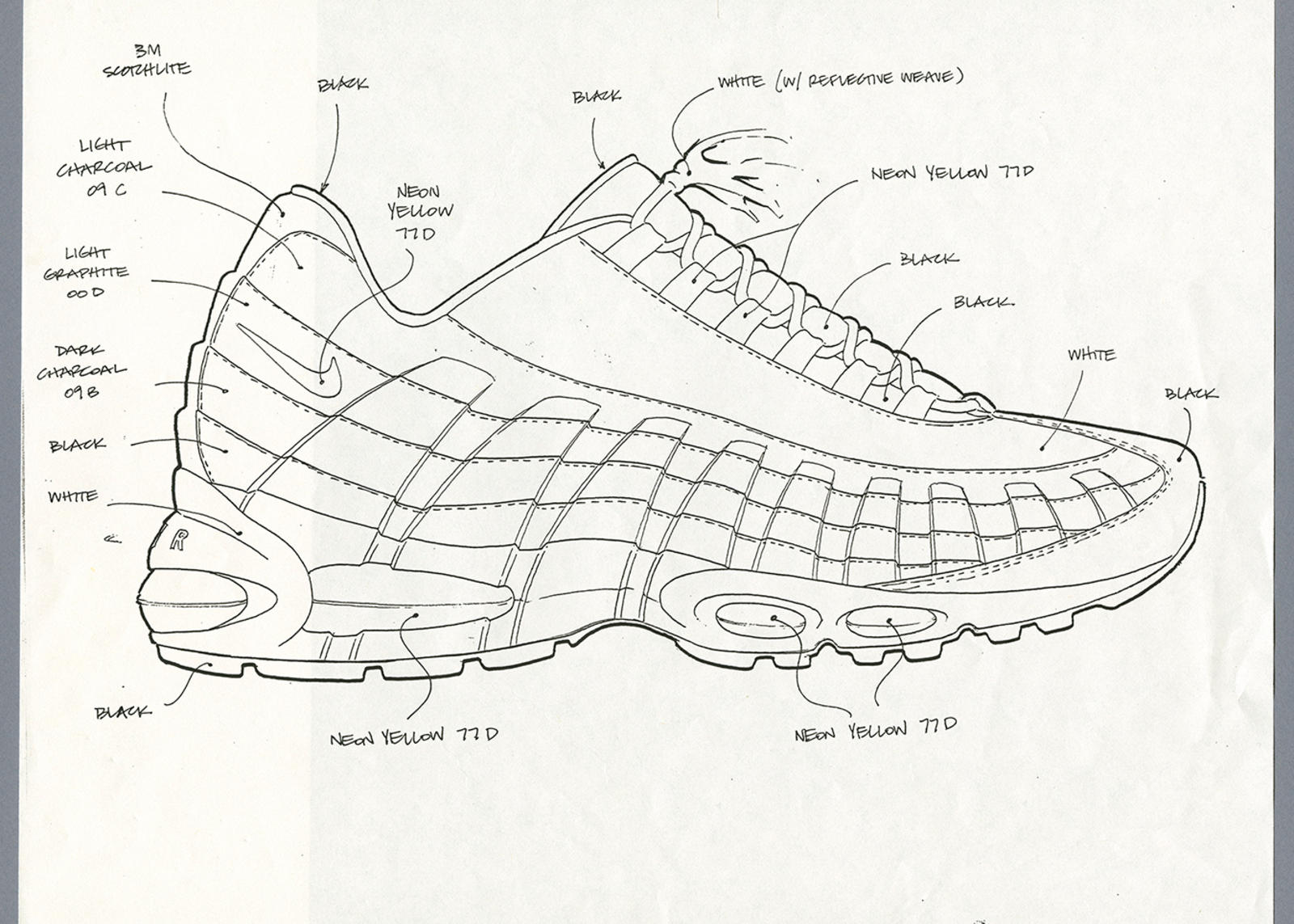 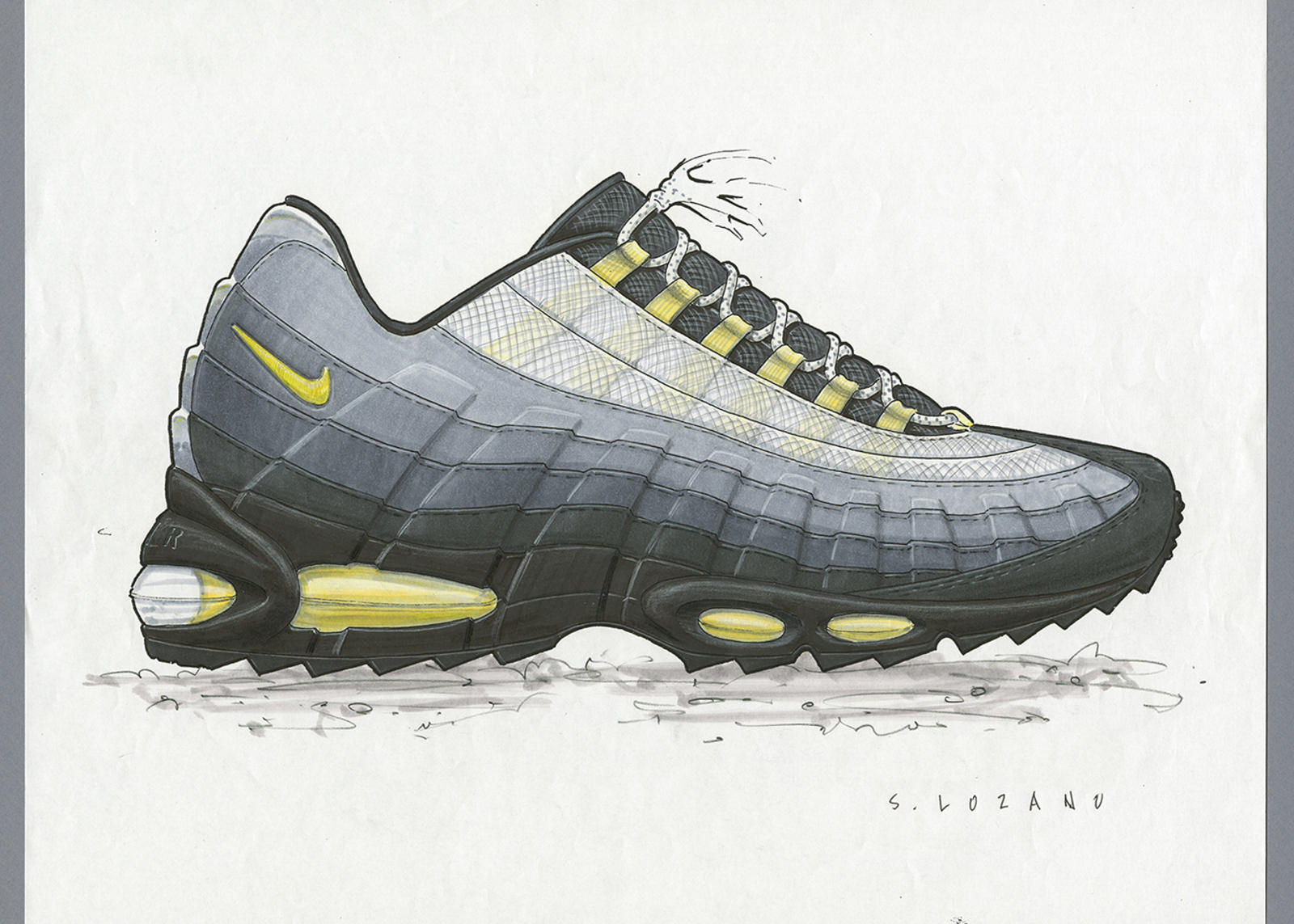 For the next few months the sketch remained undisturbed until the initial Air Max brainstorm sessions left Lozano feeling unsatisfied.  To reinvigorate the Air Max family, he would need to push it somewhere truly unique. Soon his proverbial light bulb would illuminate, and his rainy day sketch was brought into the spotlight. With the sketch acting as the blueprint, Lozano and team set out to introduce forefoot visible air — focusing the ultimate in air-powered cushioning for the runner wanting increased protection.

Despite his initial progress, one question still loomed in the back of Lozano’s mind, “I remembered something Tinker Hatfield used to always bring up while working on other projects, he would say, ‘Okay, so that’s a great design, but what’s your story?’” He found his answer in a few anatomy books housed in the Nike design library. Lozano was attracted to the correlation between the construction of the human body and the essentials of product design. The rest was simple, “all I had to do was pick the links that made the most sense.” With human ribs, vertebrae, muscles, and skin as his chief points of inspiration the first Air Max 95 prototype was created.

Nothing Of Value Is Ever Easy

The Air Max 95’s greatest strength, its individuality, was also its greatest hurdle. As the design went into the review phase, Lozano and his team quickly realized they weren’t out of the woods yet. The aesthetic was so different it caused some to query its potential. “There were lovers and haters. But you know you’re on to something when you get that kind of emotional reaction,” Lozano explains. At first, the progressive design didn’t include a Swoosh at all. Pairing that choice with two other Nike firsts, visible air in the forefoot and a black outsole, was a recipe for concern.  But Lozano and team didn’t abandon the project and eventually won over the opposition.

When asked about the Air Max 95s barely-there swoosh Lozano’s vigor re-surfaced, “We figured Nike was pretty recognizable as a brand and that the design could stand on it’s own. Why did we need it? We already had visible air and we were debuting forefoot visible air on top of that.” There also was a matter of where to put it. The shoes design doesn’t allow it to be placed the traditional spot, across the upper of the shoe, without disrupting its defining characteristics. In the end the Swoosh was placed on the back quarter of the upper, “we applied the Swoosh to act as punctuation,” Lozano states.

“There were lovers and haters. But you know you’re on to something when you get that kind of emotional reaction.” - Sergio Lozano

With the design finalized, it was time to decide on the launch colorway.  Originally, Lozano set out to make the colors as functional as the shoe itself, “in Oregon, people run when it rains, they run on trails, and after the first five miles their shoes look beat and I wanted to disguise that a bit.” His ever-present confidence struck once more when he decided to incorporate gray as one of the prominent colors. “I was told that gray didn’t sell and took that as a challenge. “ Black and dark gray were used at the base of the shoe where dirt was most likely to accumulate, and transitioned to lighter shades further up the shoe’s profile. The Air Max 95’s signature shade of neon yellow was chosen as a nod to Nike’s heritage defining racing kit, which continues to feature an array of highly visible colors on track spikes and cross-country flats. 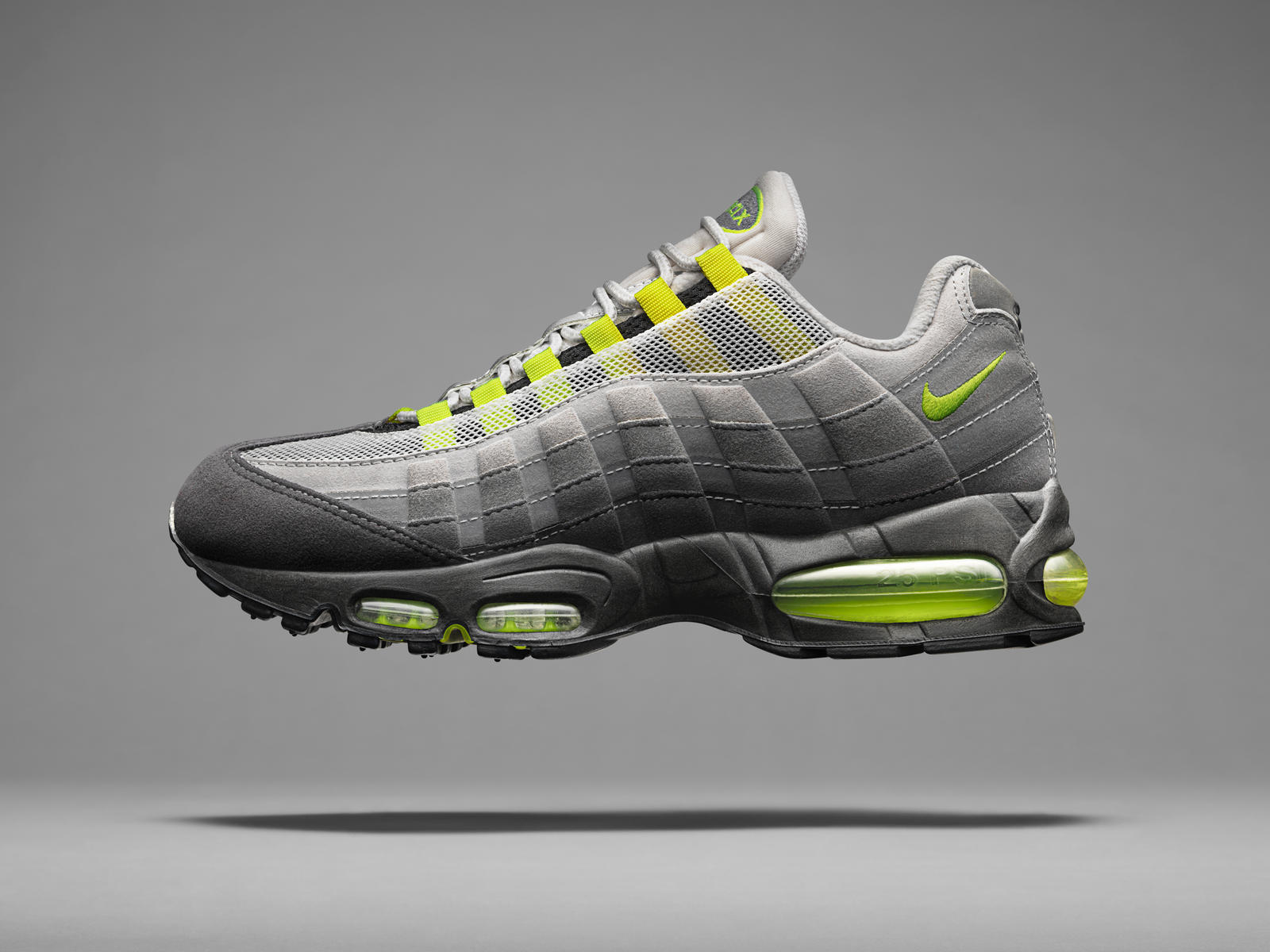 With no shortage of perseverance, Lozano and his team battled through review after review until the shoe was put into production. His confidence paid off as the shoe soon became synonymous with budding music movements from London to New York, and beyond, whose collective and characteristic brash sounds paralleled the shoes unapologetic aesthetic. Youth culture rallied behind the Air Max 95 and the Air Max franchise blossomed into a style staple. The running category’s gamble paid off and it re-claimed its spot as a footwear powerhouse as well as captured the minds of young designers around the world. Now at the mature age of twenty, Sergio Lozano’s concept still influences contemporary design.