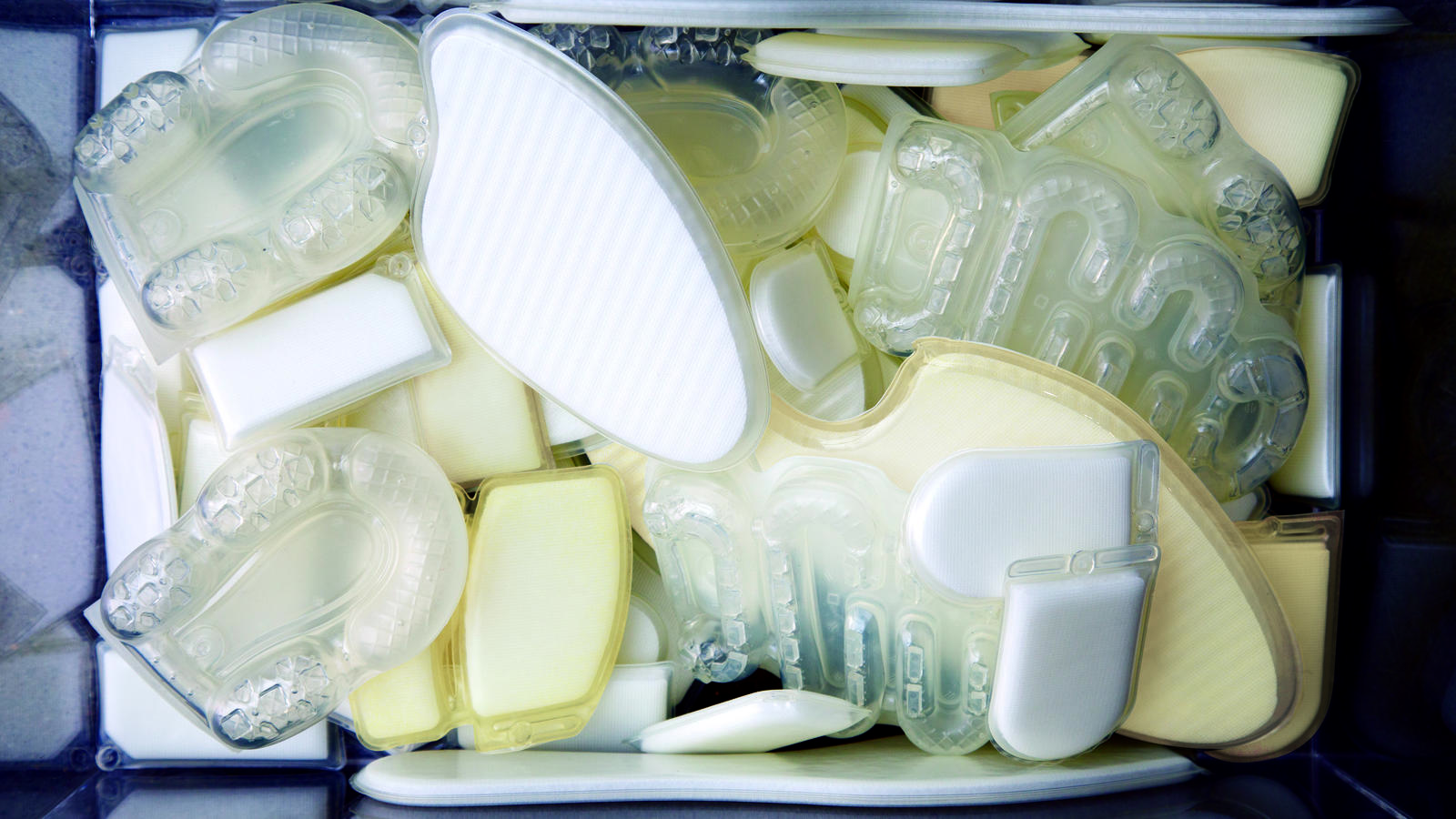 For their first nine years, Air units were celebrated for performance viability and tuned for optimal volume for a particular activity. Still, Nike’s most dynamic tool remained hidden in plain sight. That changed in ’87, when Air went visible, nailing the emotive tenor of the time.

What had once been conceived as a simple technical component became a critical element of design language — visible Air was an object of desire, with a beauty all its own.

Here are three more examples of design and manufacturing ingenuity that have helped to continually reinvent Air, ensuring its long-term vitality.

Reinventions of Air Max require striking a deft balance between stability and experience. Creating the softest sensation, provided by the latest Air Max 720, is achieved by pushing the limits of material and architecture. In this case, the Air-Sole doesn’t just offer a big bounce, it cradles the foot for support. Wearers can’t wobble, otherwise the intention of comfort stumbles. 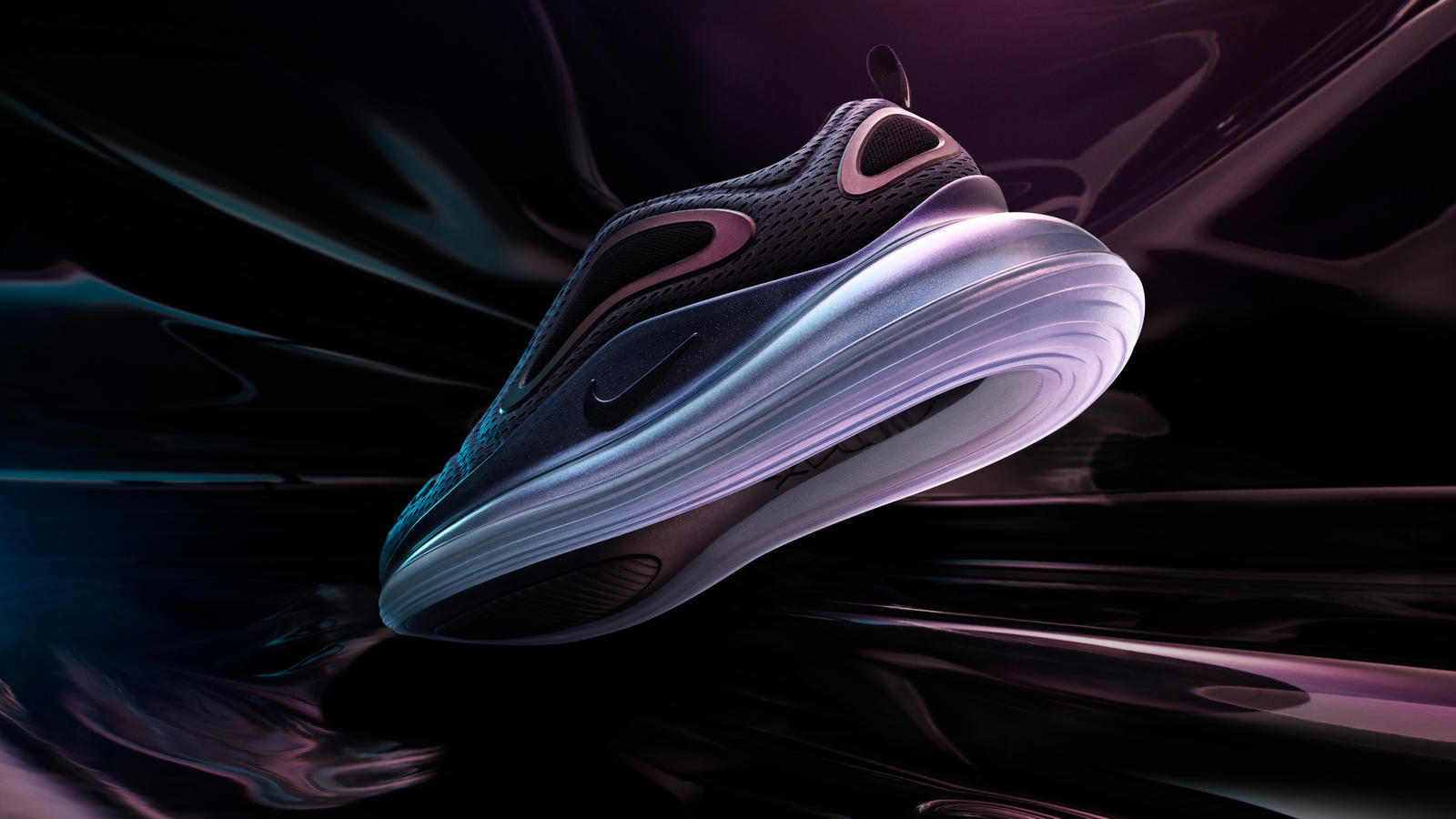 The 720 measures 38mm at its tallest point, equating to the biggest Air heel volume displacement ever.

Part of the equation is solved by going big — made possible by an inventive split-seam construction that allows an Air-Sole’s walls to form a large geometry without losing structural integrity.

Creating huge Air-Soles was originally made possible by a single technology: Blow molding.

With blow molding, Air units were able to take on new forms and designs, including various heights within the same bag for tapering or contouring. Designers could create different chambers or pods with different pressures that provided superior zonal cushioning. Blow molding also allowed designers to create the tallest Air-Soles (with longer-lasting impact protection), minimize midsole foam and make the most visible Air units to date.

Before molding, Nike designers modified an Air-Sole’s height by increasing the air pressure within the bag’s side walls — not much opportunity to maximize.

Blow molding changed everything. It opened a toolbox for Nike’s designers and engineers to dream up newer cushioning systems, and was an ideal showcase for Nike Air. Blow molding also offered a leap forward in manufacturing speed, efficiency and cost: the weld pattern and shape of the Air unit could be formed in a single step.

1991: Nike veteran designer Bruce Kilgore — one of the guys who originally put Air in a hoops shoe — uses blow-molding technology to create the first Nike Air 180 unit, which is visible through the heel of the shoe and up the sides.
1993: Nike further perfects the art of blow molding in the Air Max 93, allowing Nike designers to create an Air-Sole unit that literally expands beyond the barriers of the midsole. The new technology yields 35 percent more soft, effective Air cushioning, total heel visibility — and a dramatic new look.
2006: Nike achieves the first 360-degree Nike Air midsole, completely eliminating the traditional midsole. (The project’s origins were rooted in something called “bubble air,” which involved vacuforming a polyurethane sheet into the shape of a midsole and an outsole together, laying another sheet on top, joining those sheets and then inflating it.) The Nike Air 360 demonstrates how Nike Air ideas morph and cross-pollinate.

How blow molding works
First, TPU pellets are fed into a heated barrel. A rotating screw shears the pellets until they liquefy. Once the material is viscous, it’s forced into a mold (much like squeezing toothpaste into a tube) that is the shape of the final desired part. The plastic cools and is ejected from the machine as a finished component.

When Nike eliminated SF6, the business pivoted from blow molding to thermoforming with microlayer sheets. The same designs that were created through blow molding have been replicated with thermoforming, providing a seamless transition for Nike’s consumers, and still under the Max Air moniker.

This is an outer swept pinch (OSP). It’s a ridge of TPU that’s durable and reliable enough to connect an Air bag to the bite line of a shoe’s upper. When Nike invented the OSP, it made the 2016 Nike Air VaporMax Flyknit possible — the first foam-, rubber- and glue-free Air unit. Before that, all Nike Air shoes required elements such as foam or TPU rands to connect the Air unit to the upper, which added weight and diminished the soft, bouncy, flexible sensation of Air.