Each year, Nike introduces new technologies, silhouettes, materials and methods of construction all in the name of making athletes better. 2014 was no exception. 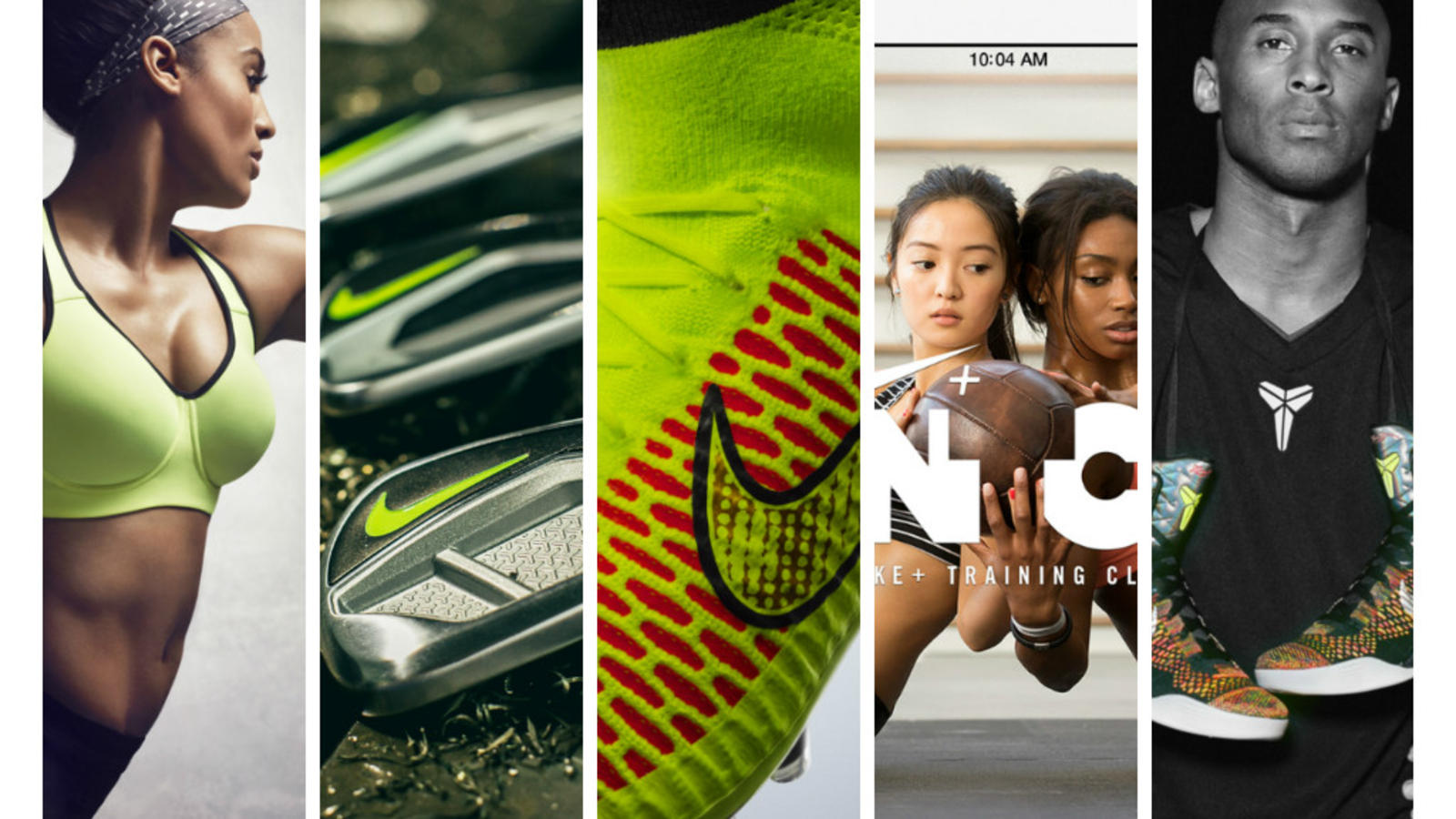 Vapor made its mark on iron to give metal extra muscle. Nike Flyknit transcended tracks to make history on pitches, fields and courts as a new breed of basketball shoes and football boots took shape. Underwear was given the same scrutiny as outerwear. The smartphone became a personal trainer and evolving connection to a community of millions on the same quest.

Where these technologies lead is limitless — and what they allow athletes to achieve is even more exciting. On the eve of a year filled with personal bests waiting to happen, a look at key Nike product innovations that made a difference in 2014.

Nike Flyknit debuted in running footwear in 2012 but its potential is massive. The groundbreaking shoemaking technology showed its versatility this year, lending cleats a completely new form. Given the rigors of both games of football, Nike Flyknit didn’t seem an obvious choice for sports that dictate contact with the ball and opponents. But who ever said innovation was predictable? Flyknit performed brilliantly on the global stage in Brasil last summer and currently is demanding notice in the first-ever College Football Playoff.

Introduced last spring, the Nike Magista and new Mercurial Superfly proved that a football boot didn’t need to stop at the ankle. The mid-cut silhouettes allow the foot, ankle and lower leg to work together as a single unit, increasing awareness of the body’s movements and interaction with the ground and ball. The 3-D knit Flyknit uppers brought the player’s foot closer to the ball for quicker plays and enhanced ball feel. German striker Mario Götze’s tournament-winning goal wearing the Magista was a testament to the benefits of increased sensation and reaction. 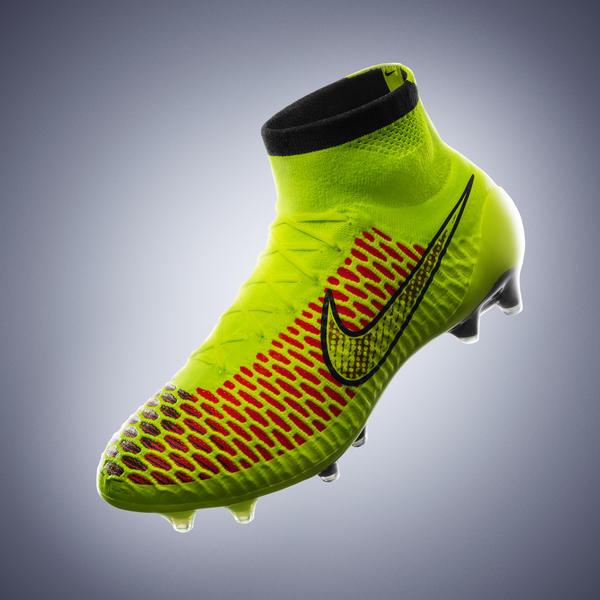 The Magista redefined how football boots look and perform. 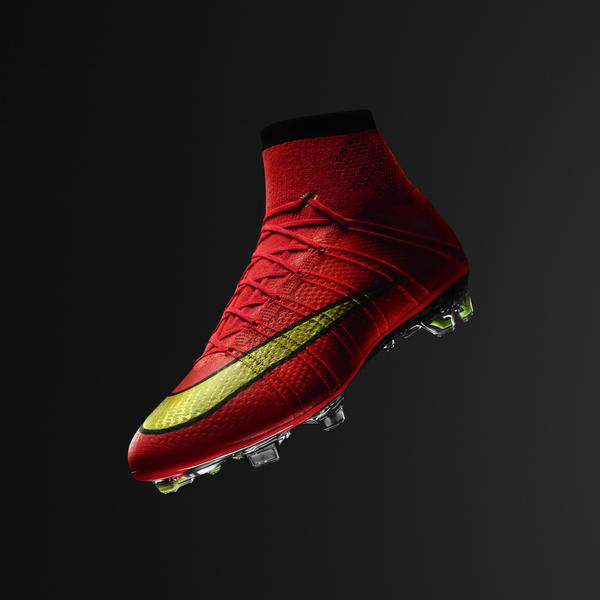 The Mercurial Superfly represents a leap forward for on-pitch speed. 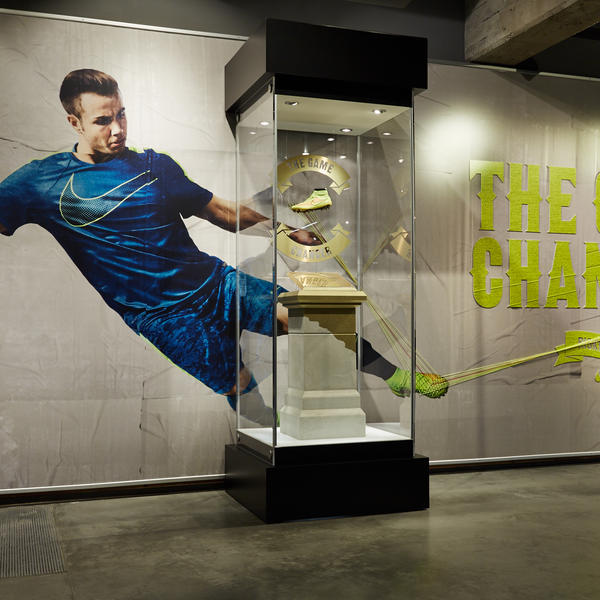 In American football, the newly released Nike Vapor Untouchable cleat created a new standard of sustainable stealth. The Nike Vapor Untouchable features a lightweight Flyknit upper made from a recycled polyester yarn that uses the equivalent of five plastic bottles per pair. It combines the mobility of a low-cut cleat with the support of a mid-cut version, and like its soccer brethren, provides increases sensation of movement for split-second acceleration. 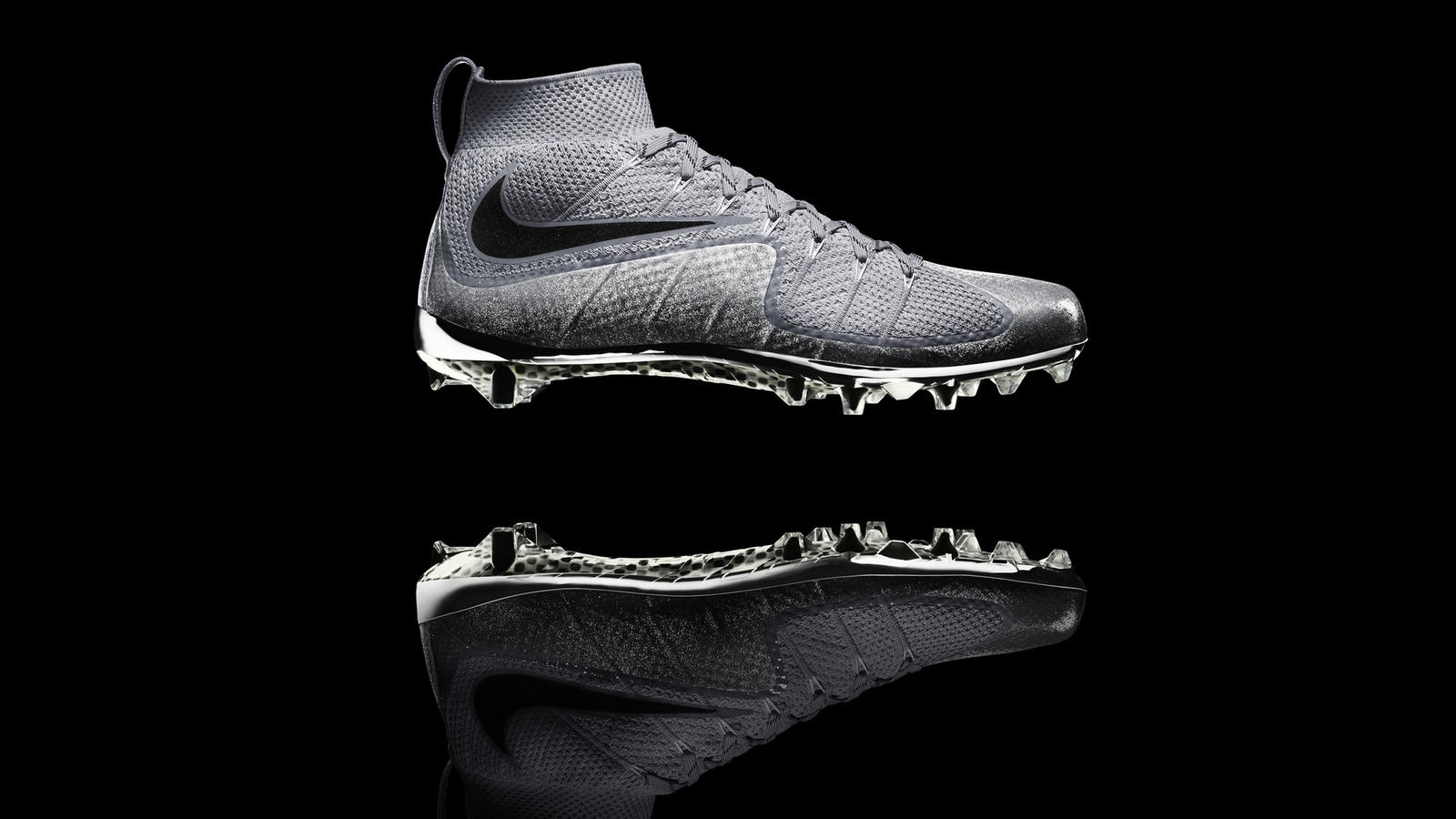 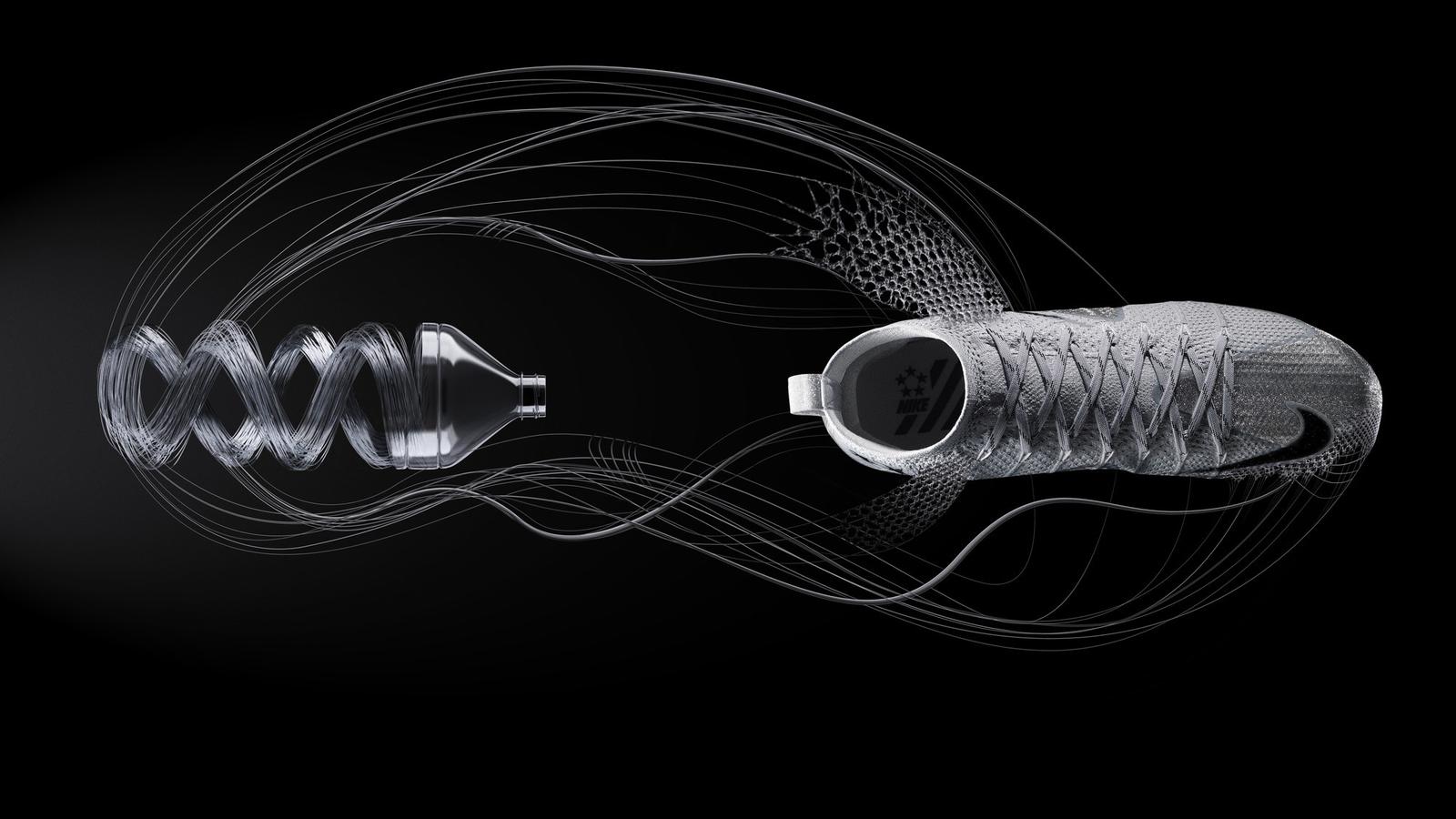 The Nike Vapor Untouchable is also the first Flyknit cleat made with recycled polyester yarn – each pair is knit with the equivalent of five recycled plastic bottles. 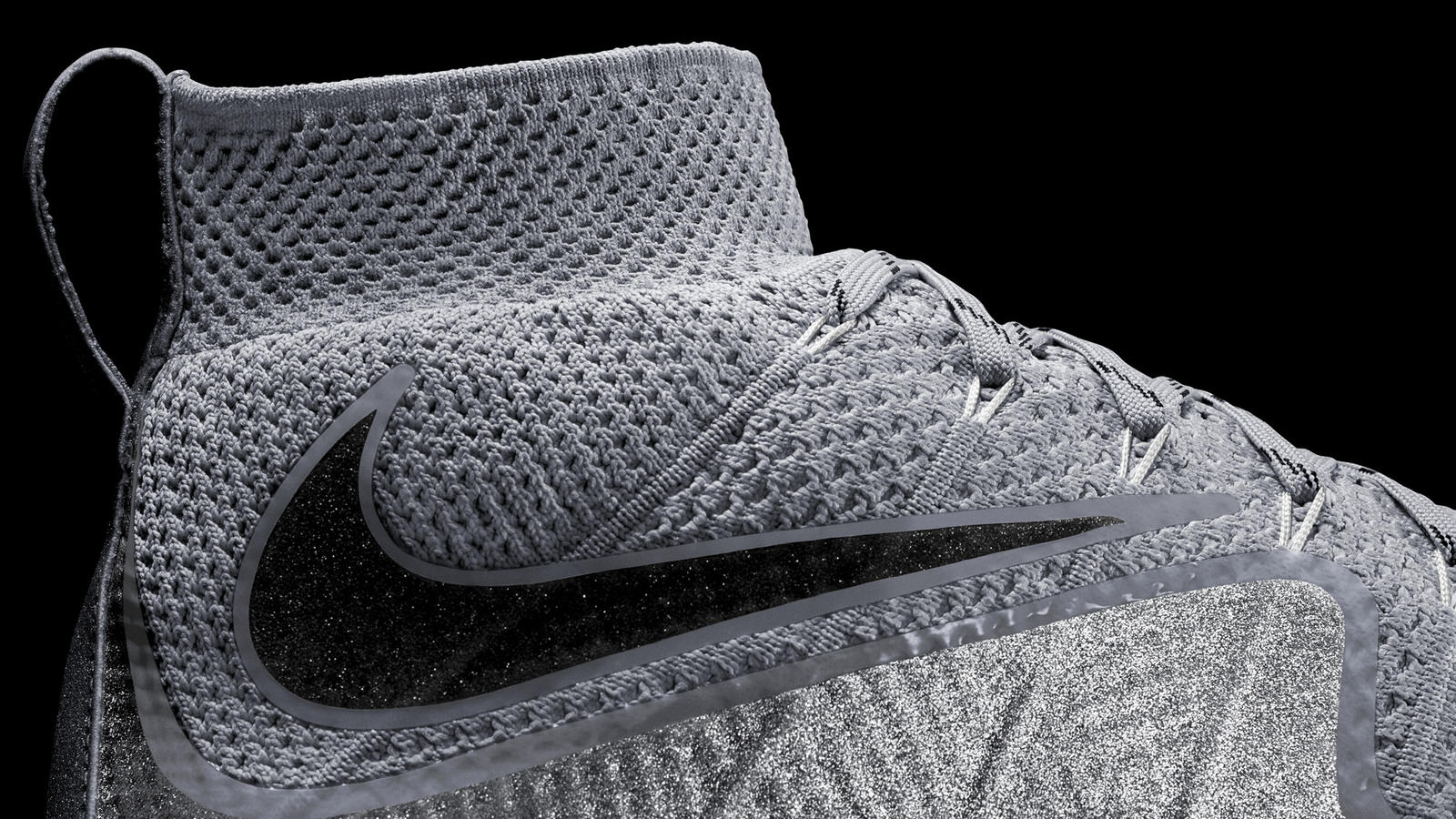 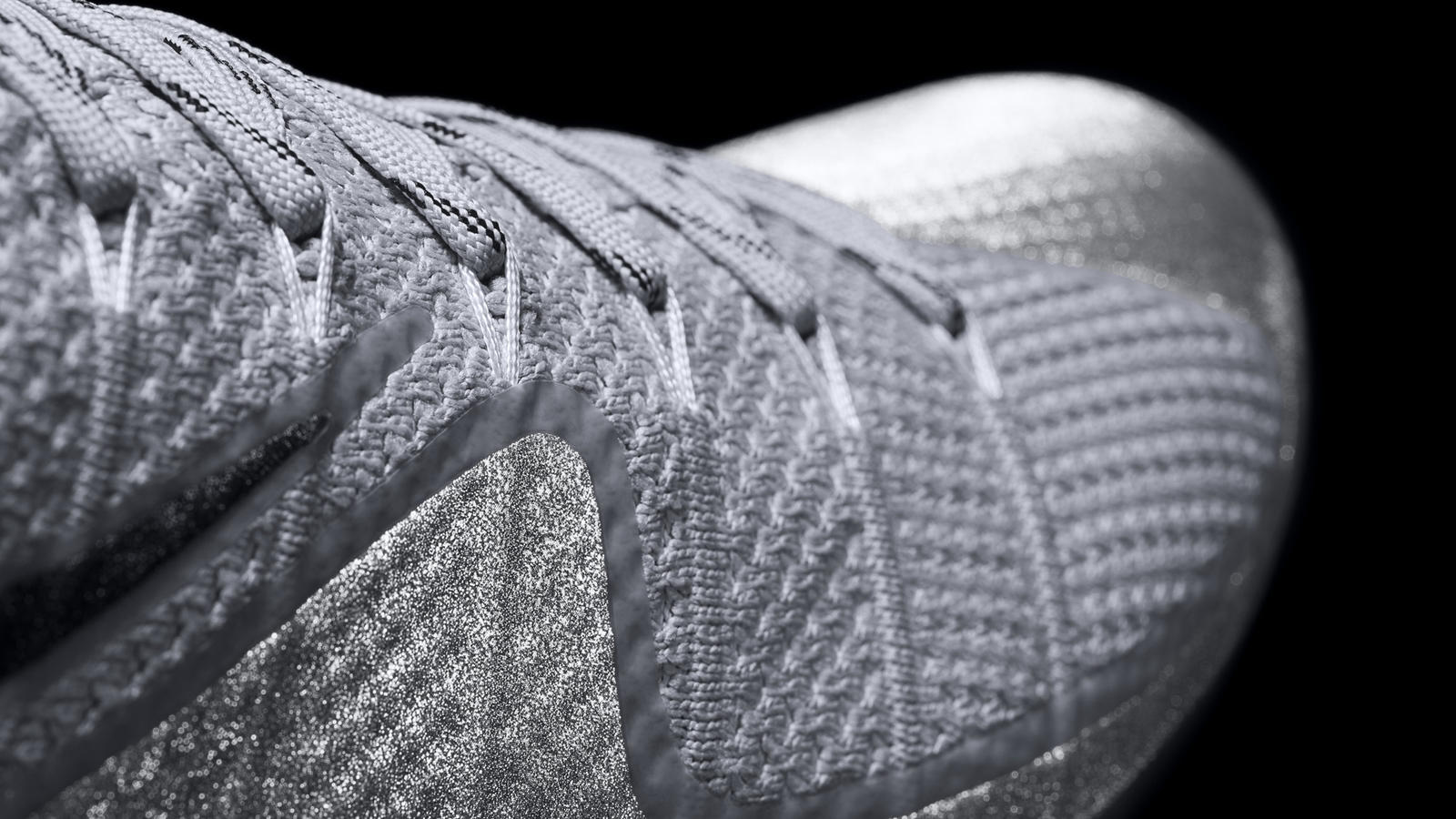 Without a great bra, a woman's workout is completely compromised. The Nike Pro Bra collection aims to make sure that is never the case, regardless of an athlete’s shape or support needs. The new collection spans more than 20 sizes and introduced the custom-calculated Nike Pro 360 Fit System to address diverse body types, sports and workouts. Using the system, an athlete enters both rib cage circumference and cup size to determine the right bra in the best size. 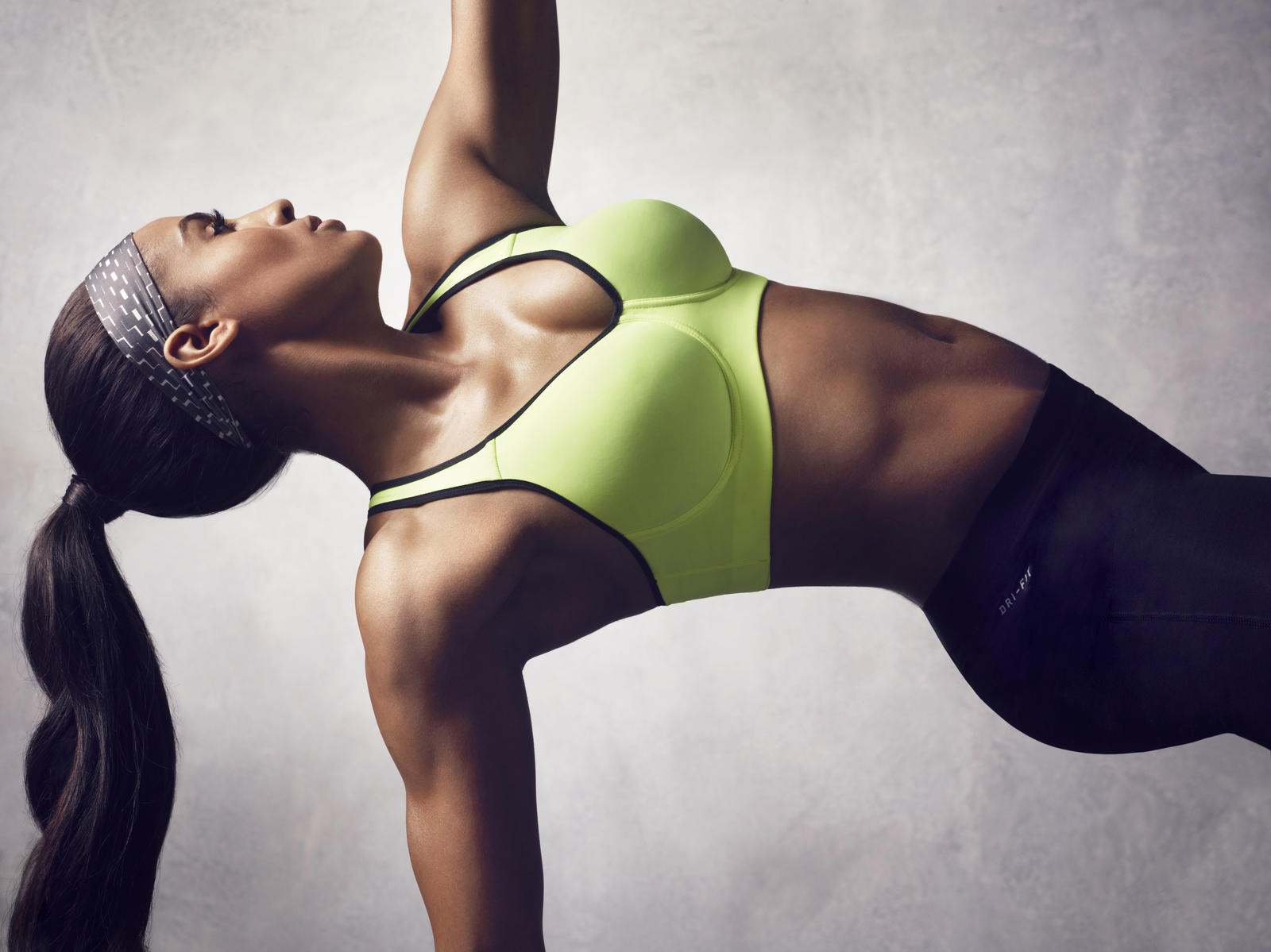 Nike worked with experts at Loughborough's famed sports research facilities in the U.K. to study the biomechanics of female athletes in motion, uncovering new insights regarding displacement and breast movement and pinpointing exact areas for support.

The most innovative garment in the collection of five Nike Pro Bra styles is the partially encapsulated Pro Rival Bra. It boasts separate, fully-molded cups, matte fabric and racerback design. The bra comes in 25 sizes, ranging from 30B to 38E, to provide personalized fit. It is the nexus of lingerie and sports innovation, the product of thousands of hours testing and scrutinizing fit, wear, care and modulus — the degree of stretch — to maintain a consistent, compression fit.

Golfers know. The nature of their game makes them hyper-perceptive, which means a player like Tiger Woods or Rory McIlroy won't hesitate to reject a new club unless it feels right. But there's always better. For footballers, baseball and tennis players, Vapor has long represented top technology, and now the benefits are on the course too. Nike Golf used Woods’s insights to create the Vapor Iron collection, with a Volt-colored Swoosh on metal hinting at its performance potential.

By testing adjusted weighting time and time again, Nike created the Modern Muscle innovation — a muscle-back design that shifts center-of-gravity to the club face for all-new striking purity and efficiency. Vapor Iron has the precision of a blade with the power of a distance iron. When McIlroy took the trophy in July with a prototype iron in his bag, it was clear that this modernized take on a classic was, in itself, a modern classic. 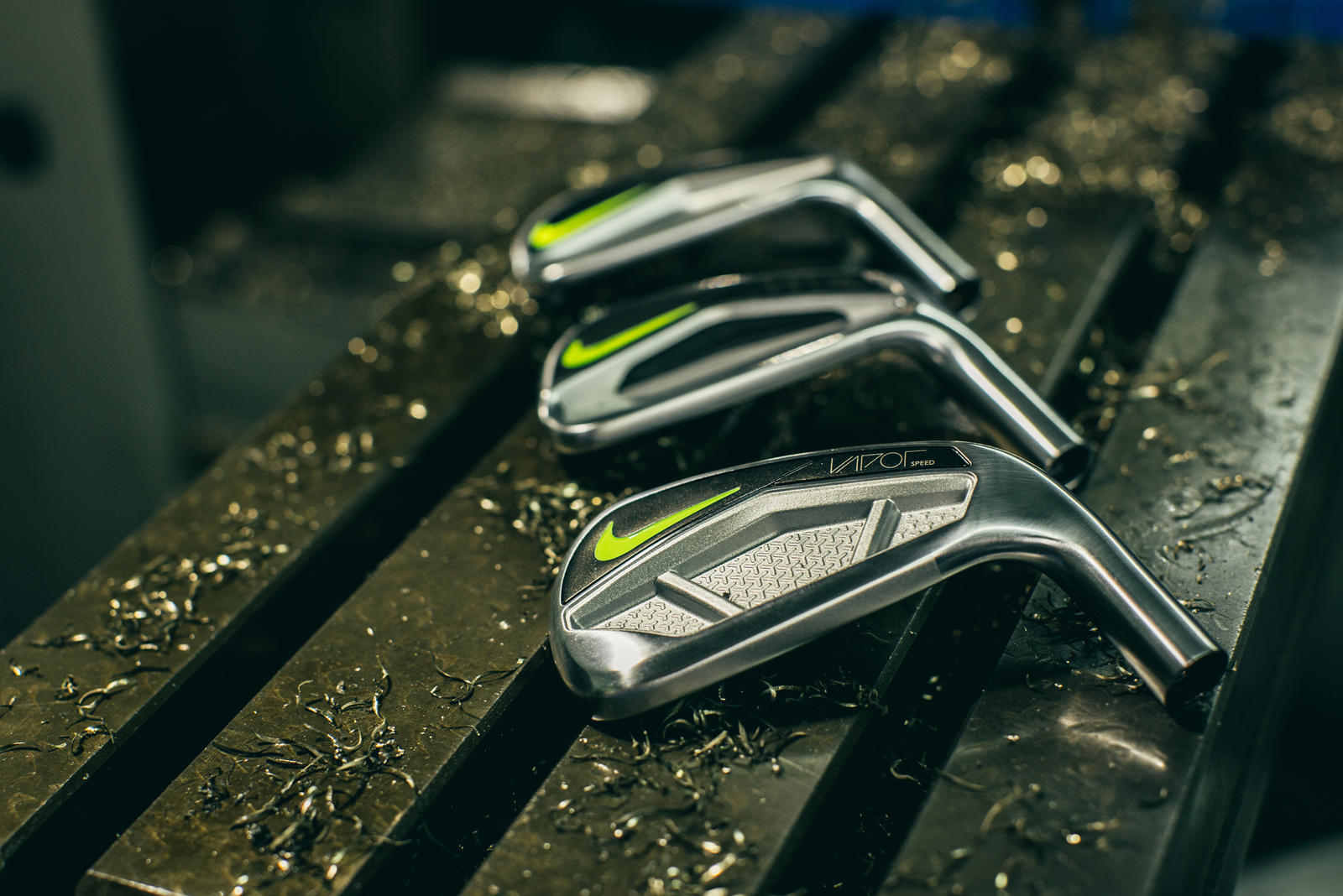 This was higher learning. After rewriting the rules on the low-top back in 2008 with Kobe Bryant’s fourth signature shoe, the Black Mamba wanted to shake things up again. Designer Eric Avar worked closely with Bryant to make the KOBE 9 Elite the first shoe to bring revolutionary Nike Flyknit technology — with its form-fitting knitted precision and comfort — to a basketball shoe. After changing running shoe performance, construction and manufacturing in 2012, Flyknit was ready to conquer other sports. 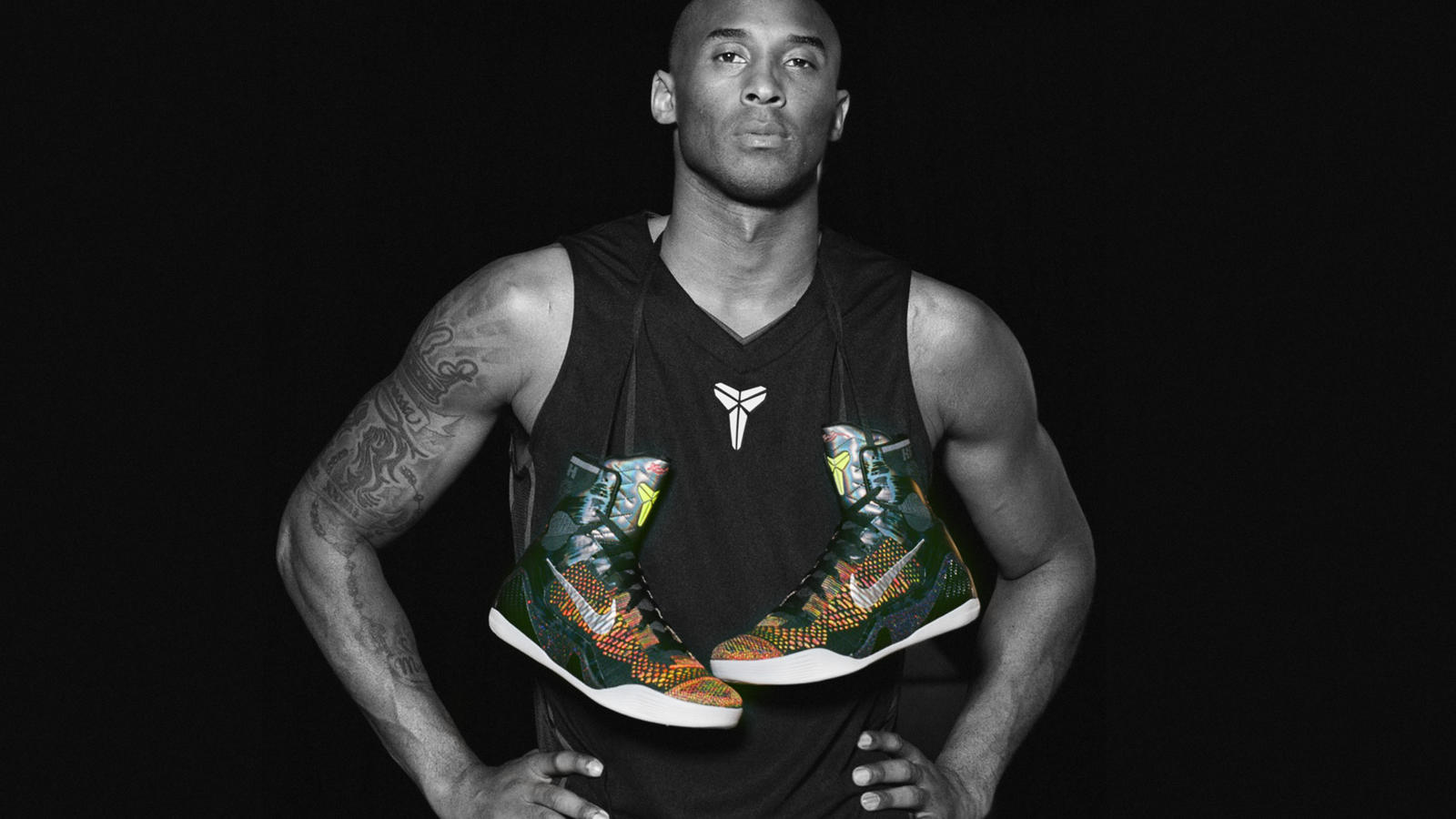 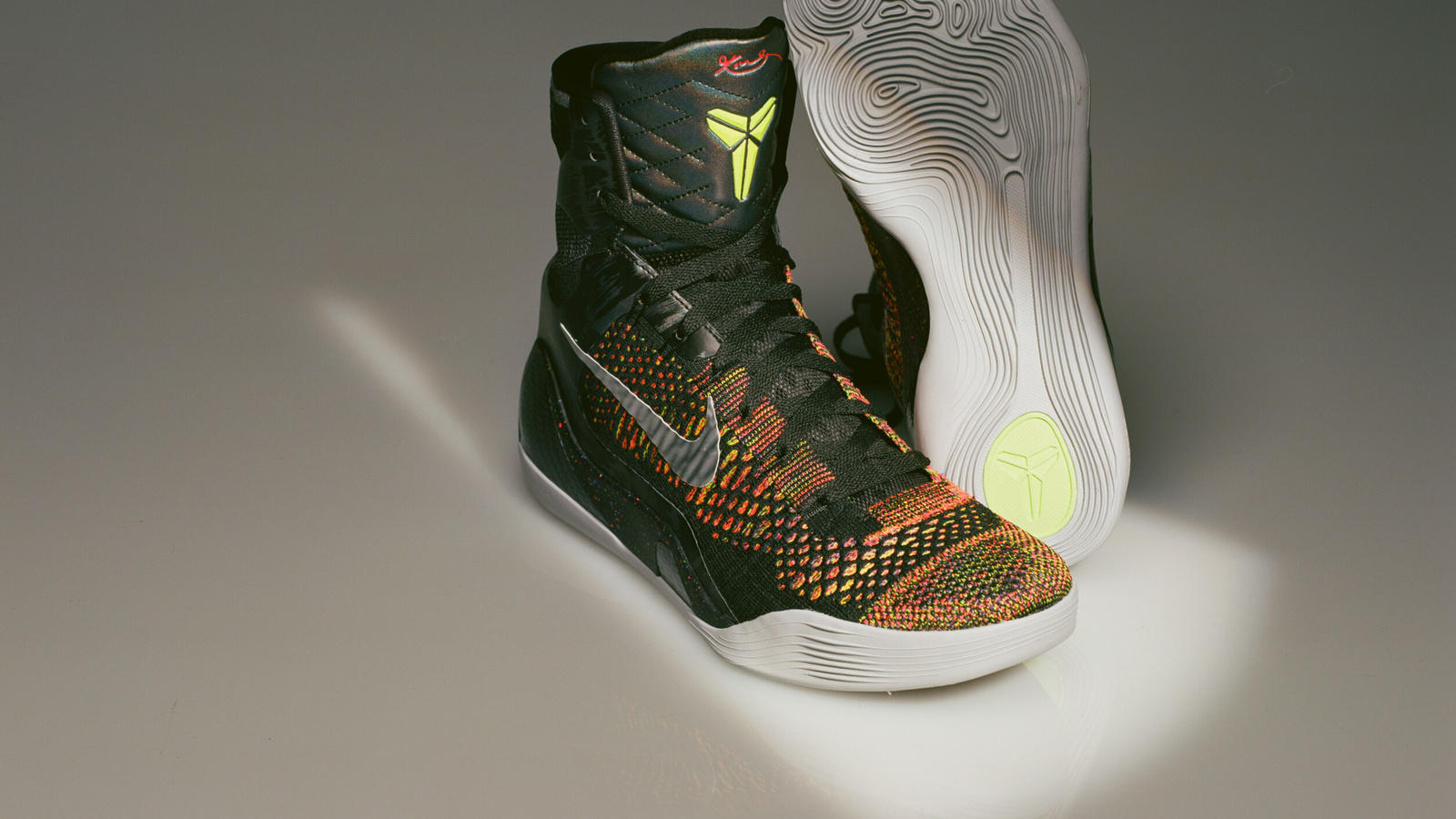 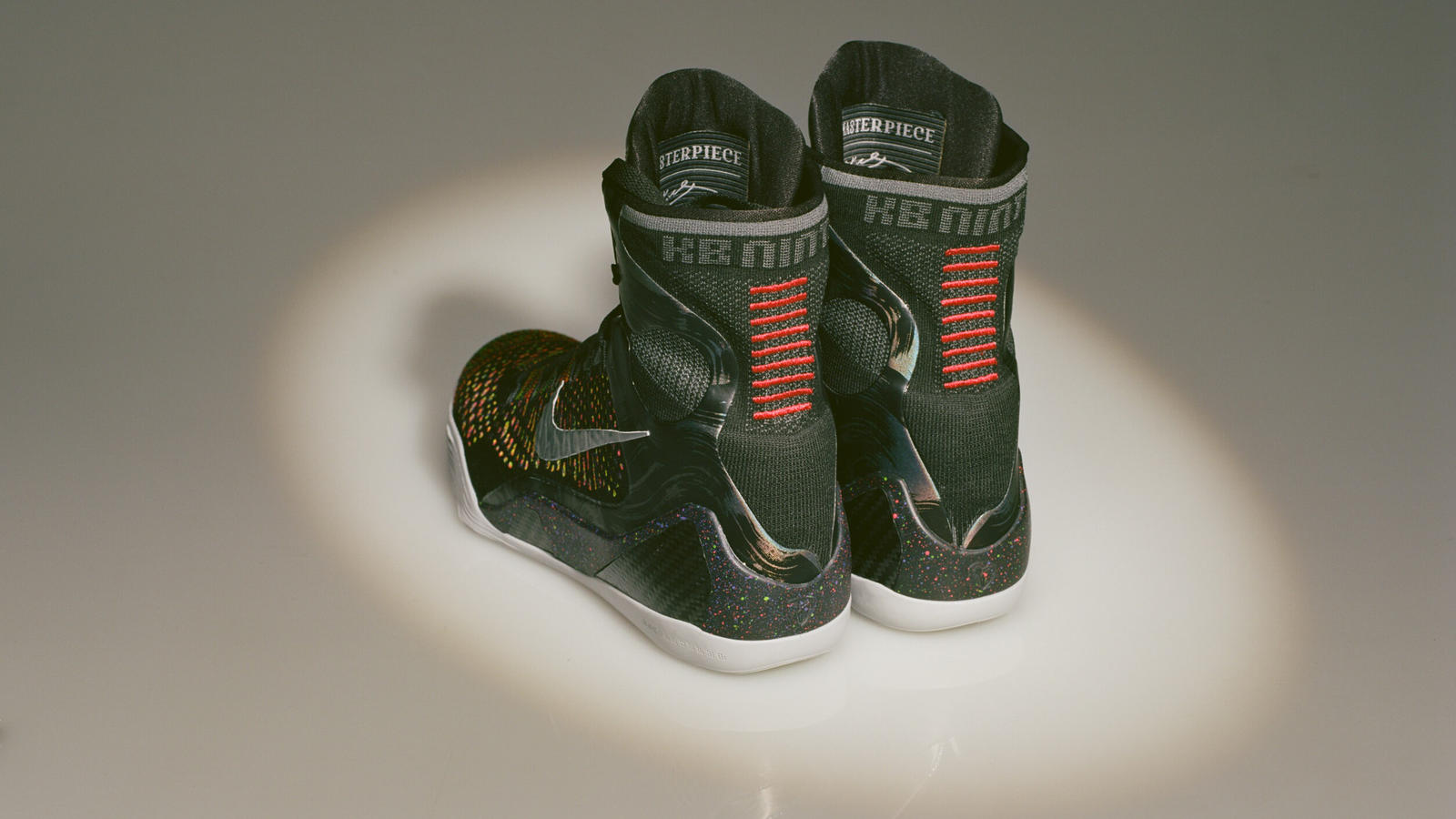 Bryant’s desire for form-fitting lockdown and lightweight strength harmonized with the precision knitting of Flyknit, weaving a supportive and striking visual chaos in the ultra-high cut upper. The KOBE 9 functions similarly to a spider web, flexing and tensing to respond to the player’s needs with every movement. Manny Pacquiao’s boxing boots informed the unmistakable, towering silhouette, with its dynamic connection to the athlete's body, while Lunarlon cushioning replaced Zoom Air to make these a masterpiece that wrote its own symphony of support, protection and comfort.

Nike connects with a digital community of more than 65 million women around the world — a powerful network of athletes committed to tapping their true potential. The Nike+ Training Club App helps them stick to their mission, delivering customizable workouts, multi-week programs and ample motivation from expert trainers, active celebrities and elite athletes. 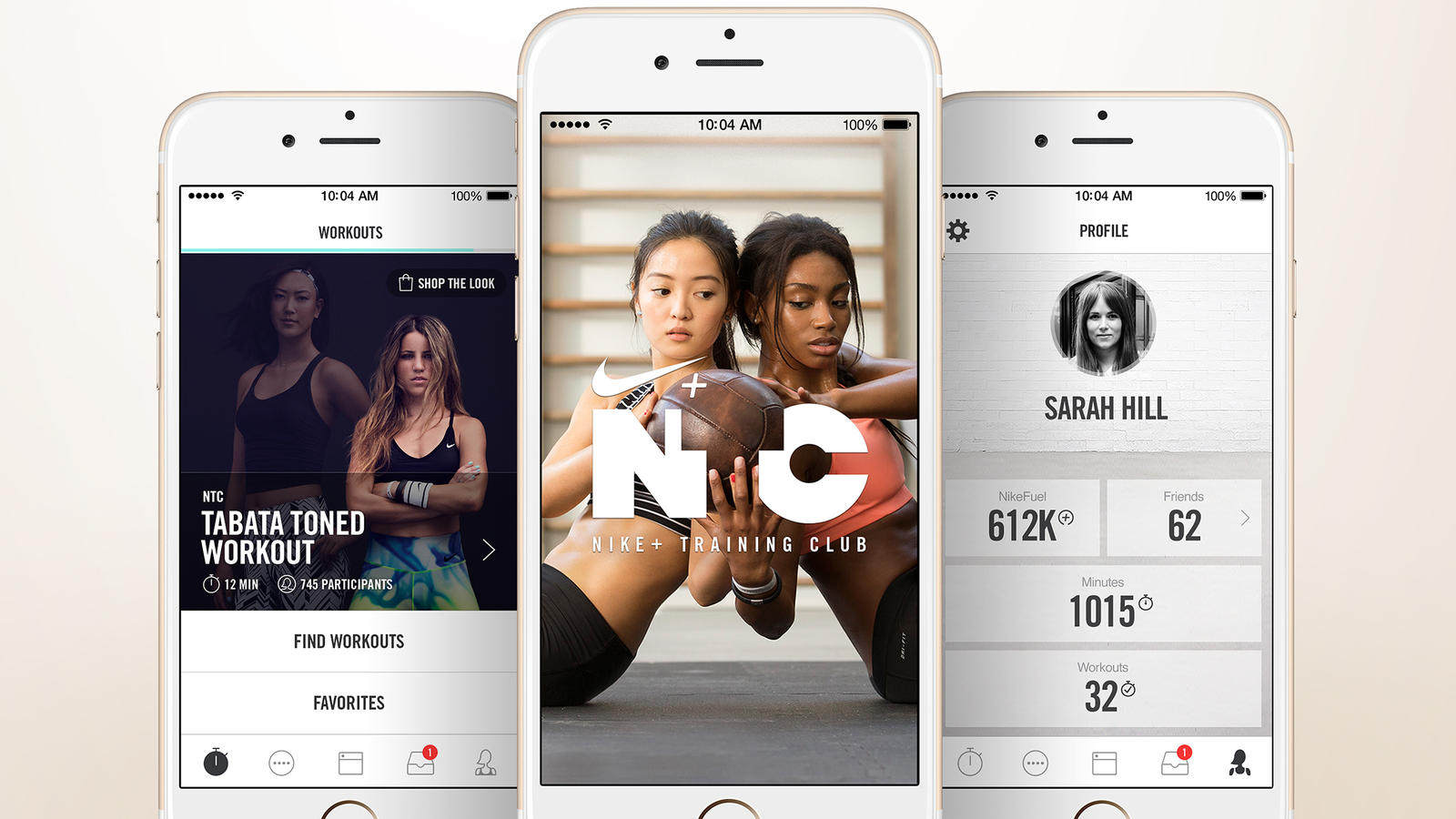 The appetite for the N+TC app is exploding: It has been downloaded 16 million times in 94 percent of the world’s countries and is available in 16 languages. Nike continues to improve the experience in ways that matter most, releasing two major updates in 2014 with another update on the way Jan. 5, 2015.

Users are able to choose and customize workouts to suit their goals of being more lean, toned or strong. The app downloads only the selected sessions, making the program smaller and quicker. Dual-screen functionality was recently introduced, allowing athletes to connect their N+TC app programming to a larger screen with Apple TV, Google Chromecast or an HDMI cable. 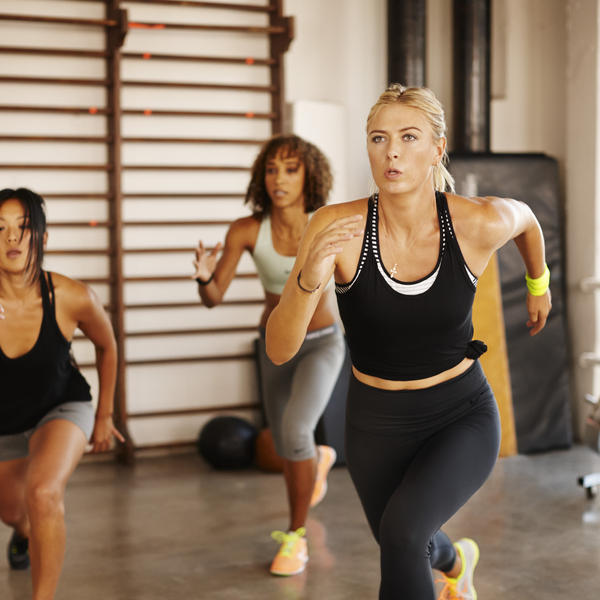 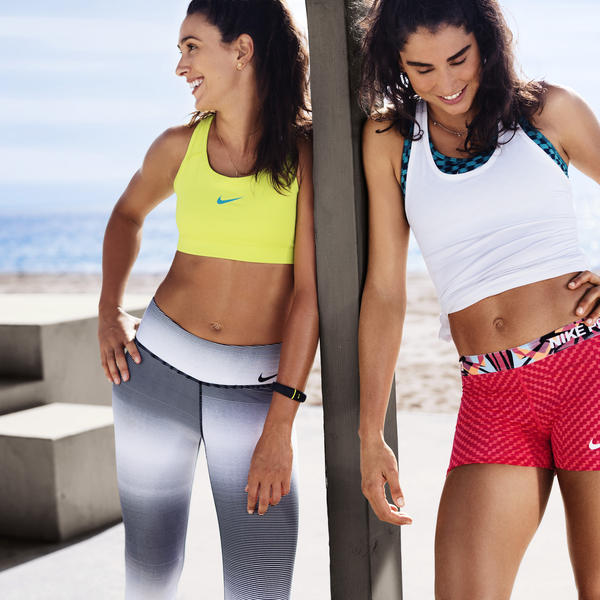 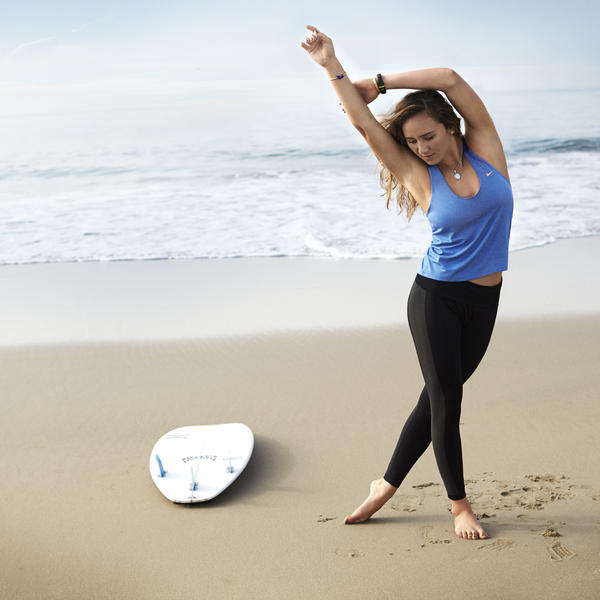