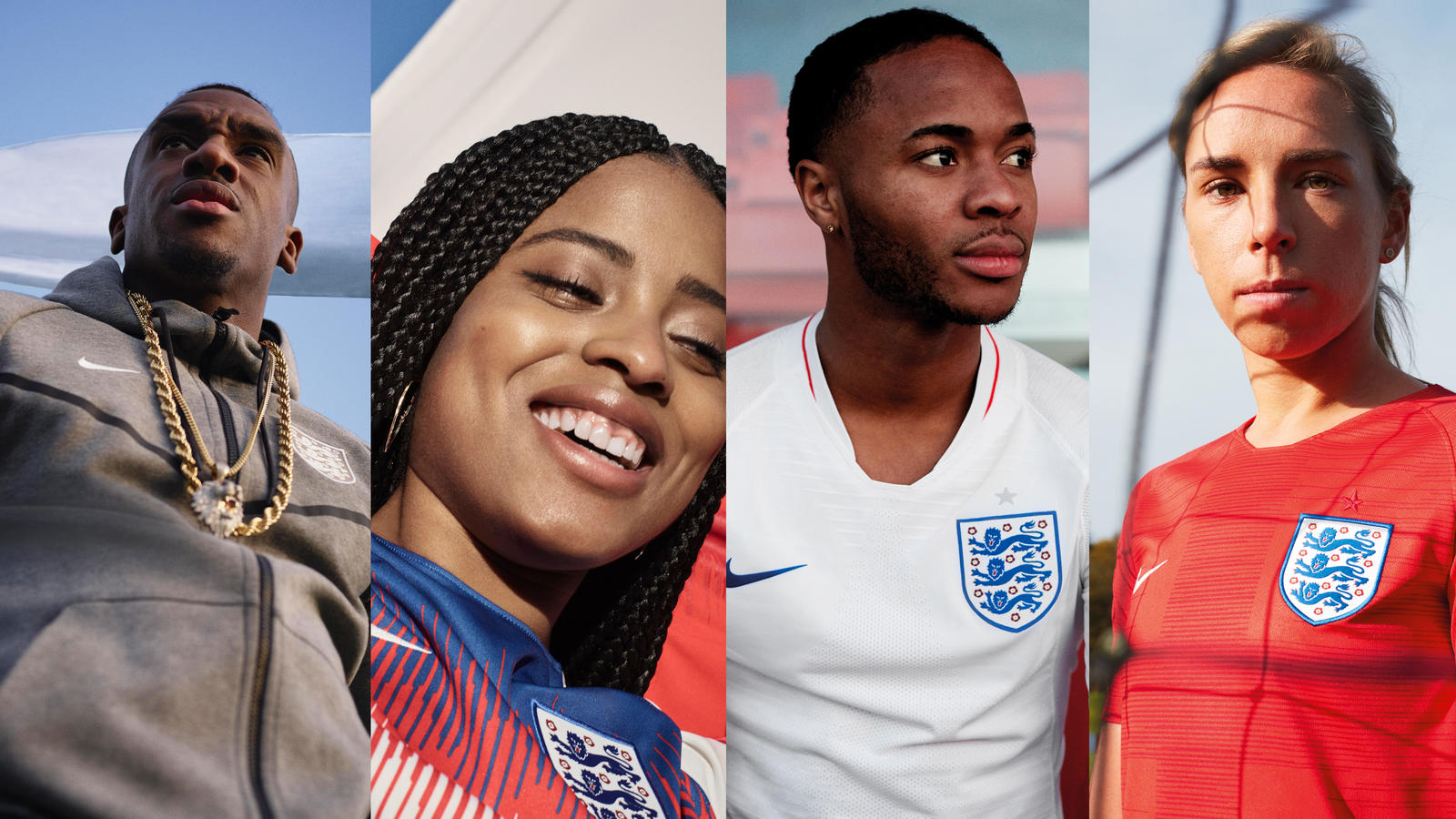 England lays claim to several representative symbols. Two of the most famous are longstanding: the rose and the St. George’s Cross. A third, the Three Lions crest that adorns the chest of the English Football Association kit, has antecedents dating back to the twelfth century.

As design elements, each of these iconic emblems plays a prominent role in the England Football Association’s 2018 collection. They root the kit in history, and when married to Nike’s latest game-changing kit innovation, fast-forward tradition into an emboldened present.

This emboldened present is best illustrated by a handful of promising results that became an extraordinary sequence of achievements during the summer of 2017.

Then, a number of the 28 St. George’s Park-based England squads that Nike outfits captured the nation’s imagination. Triumphs in June at the U-20 Toulon Tournament and the U-20 World Cup sparked a period of five months during which England claimed the U-19 European Championship, reached the semi-finals in the U-21 European Championship, reached the semi-finals of the Women’s Euros and finally — in dramatic style — came from two goals down to win the U-17 World Cup final 5-2.

As England’s senior men’s squad prepares to compete on the greatest global stage, a generation of athletes looks to continue the upward trend.

Gareth Southgate leads a youthful squad, many of who will be appearing on the world stage for the first time. Harry Kane, Dele Alli, Raheem Sterling – going to his second global tournament at the age of 23 – and Marcus Rashford brim with promise in attack. Manchester City duo Kyle Walker and John Stones look to transfer stunning domestic form to the international game and young goalkeepers Jack Butland (24) and Jordan Pickford (23) challenge 75-cap Joe Hart for the number 1 shirt.

The collection these athletes and their teammates will wear in Russia is based on England’s archetypal color palette of white, red and blue. 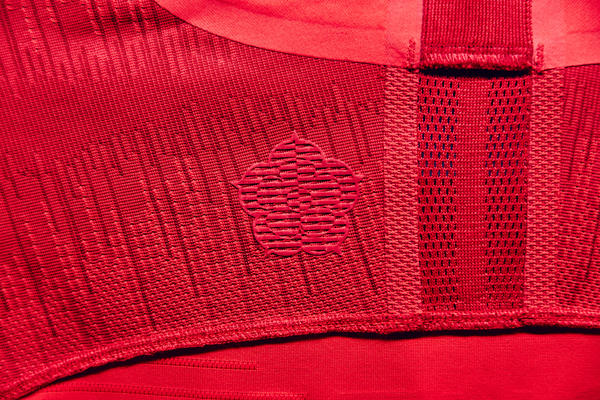 The jerseys feature a rosette at the inner neck, referencing the rose that adorns caps received by senior players each time they represent England

As well as focusing on colors synonymous with England, the St. George’s Cross – which is sure to be seen flying from cars and terraces come tournament time – exists on the back neck of both shirts. The jerseys also feature a rosette (a reference to the rose that adorns the caps received by senior players each time they represent England) on the inside of the shirt.

The custom typeface used for player names draws from Johnston and Gil Sans, both quintessentially English fonts (the former with overground transport and the latter for association with London’s underground). The player numbers (which are backed by anti-cling nodes because athletes mentioned that previous number applications had caused the shirt to stick to their backs during extreme heat) have been moved from the center of the shirt to a more breathable zone below the crest.

For a nation with such standing within the global game, the need to produce an identifiably English collection was at the heart of Nike designers’ mission. “Our goal was to create a range of products that even without an England crest or Nike Swoosh, would still instantly look like an England collection. That classic identity, with a modern edge added, is imperative to the whole collection,” says Pete Hoppins, Nike Football Apparel Senior Design Director. 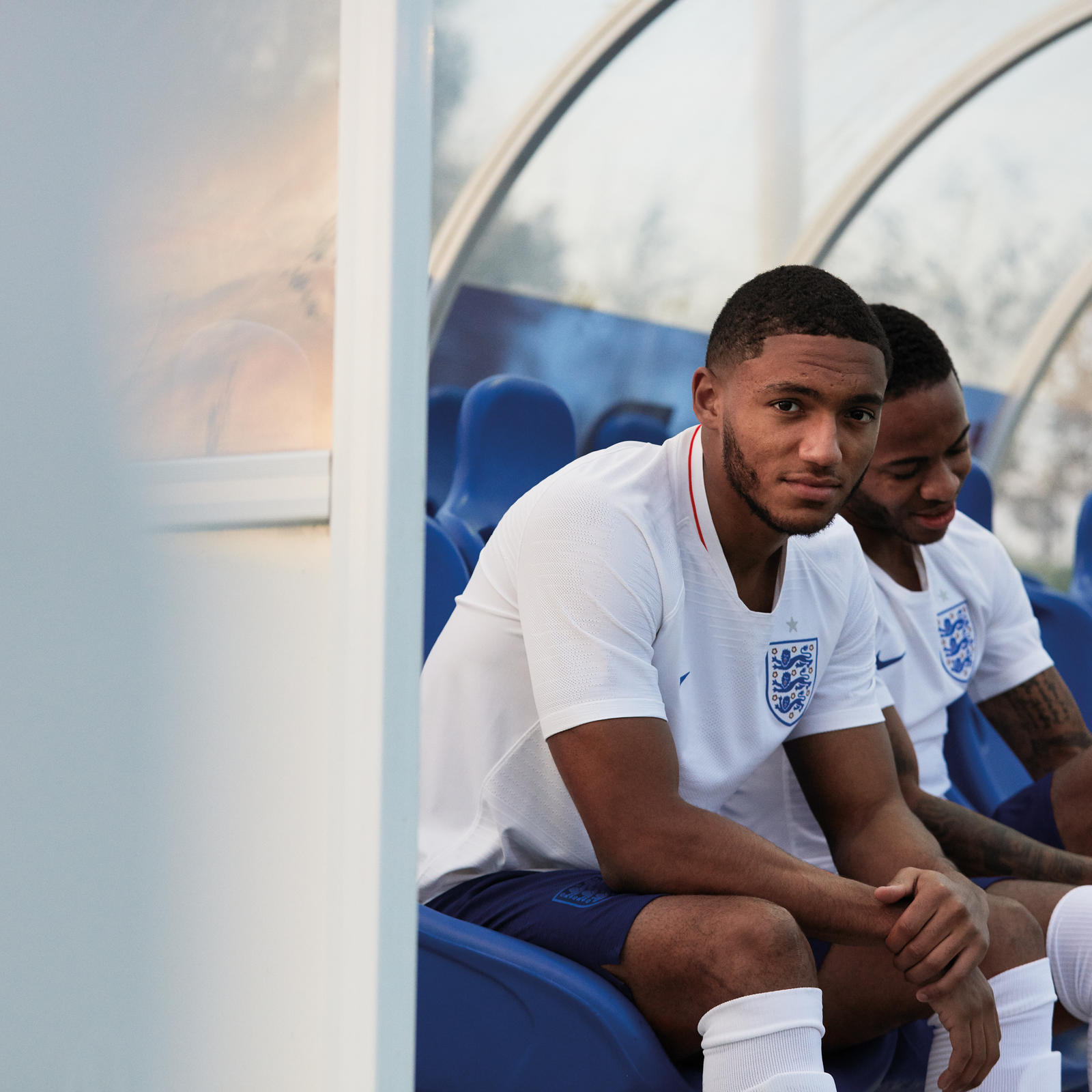 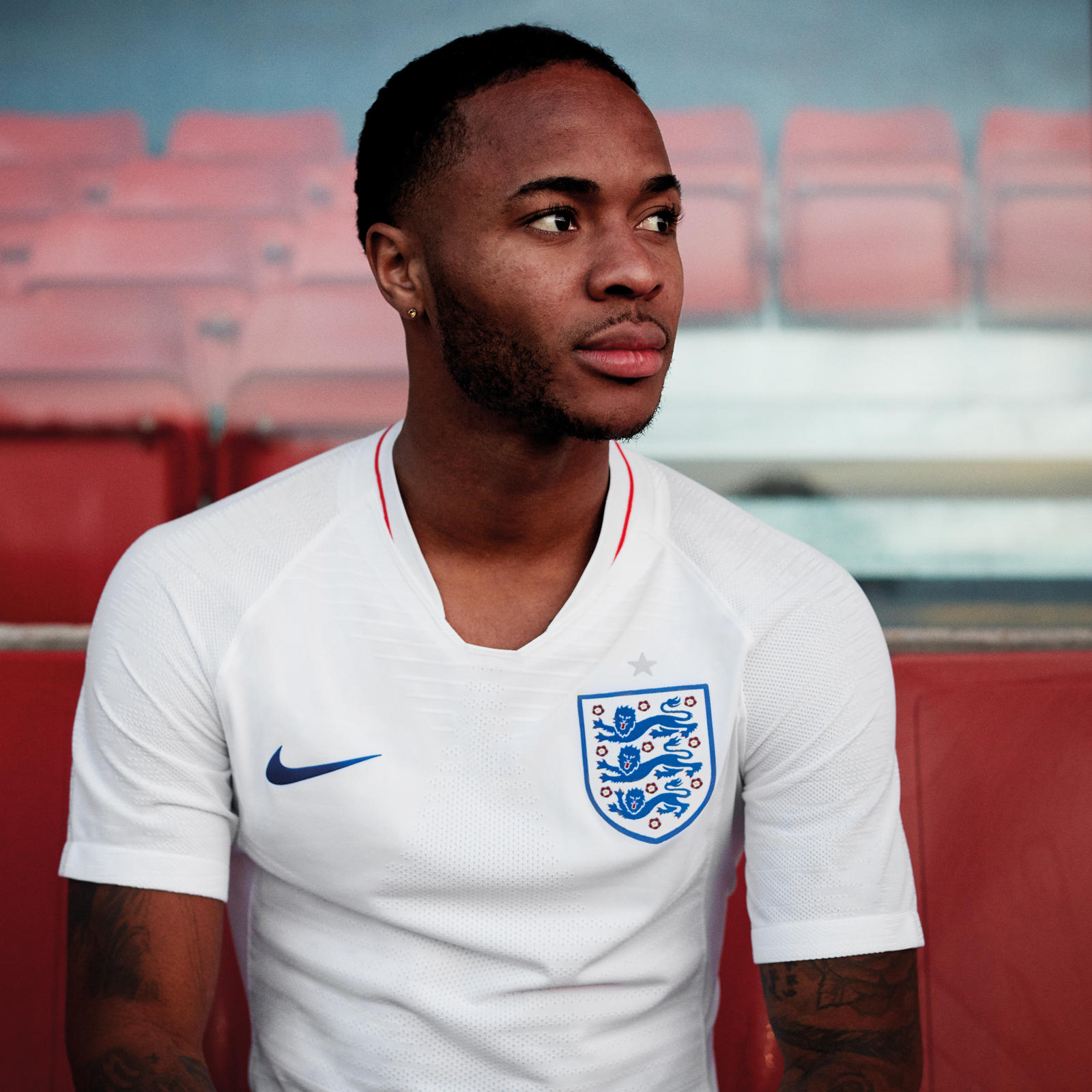 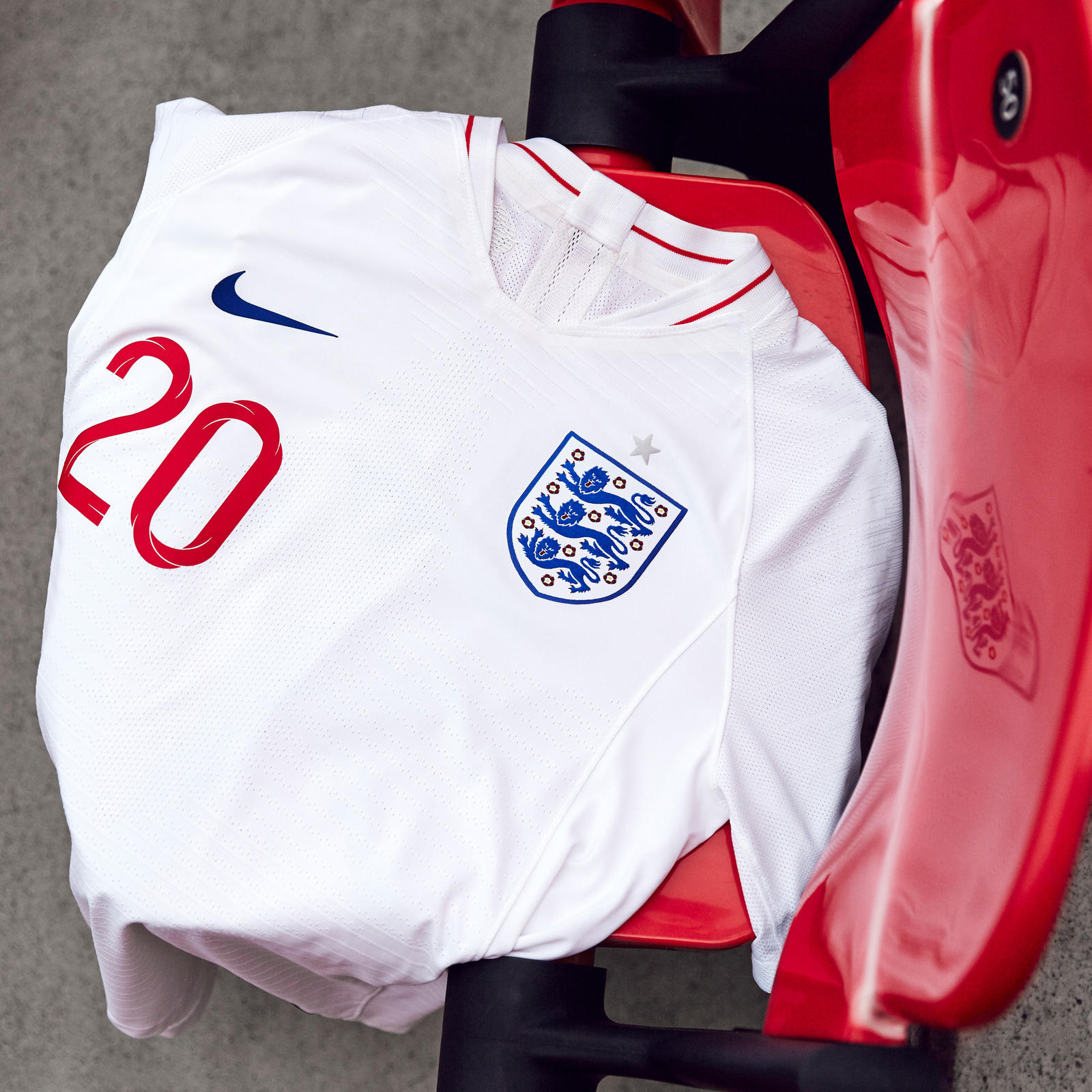 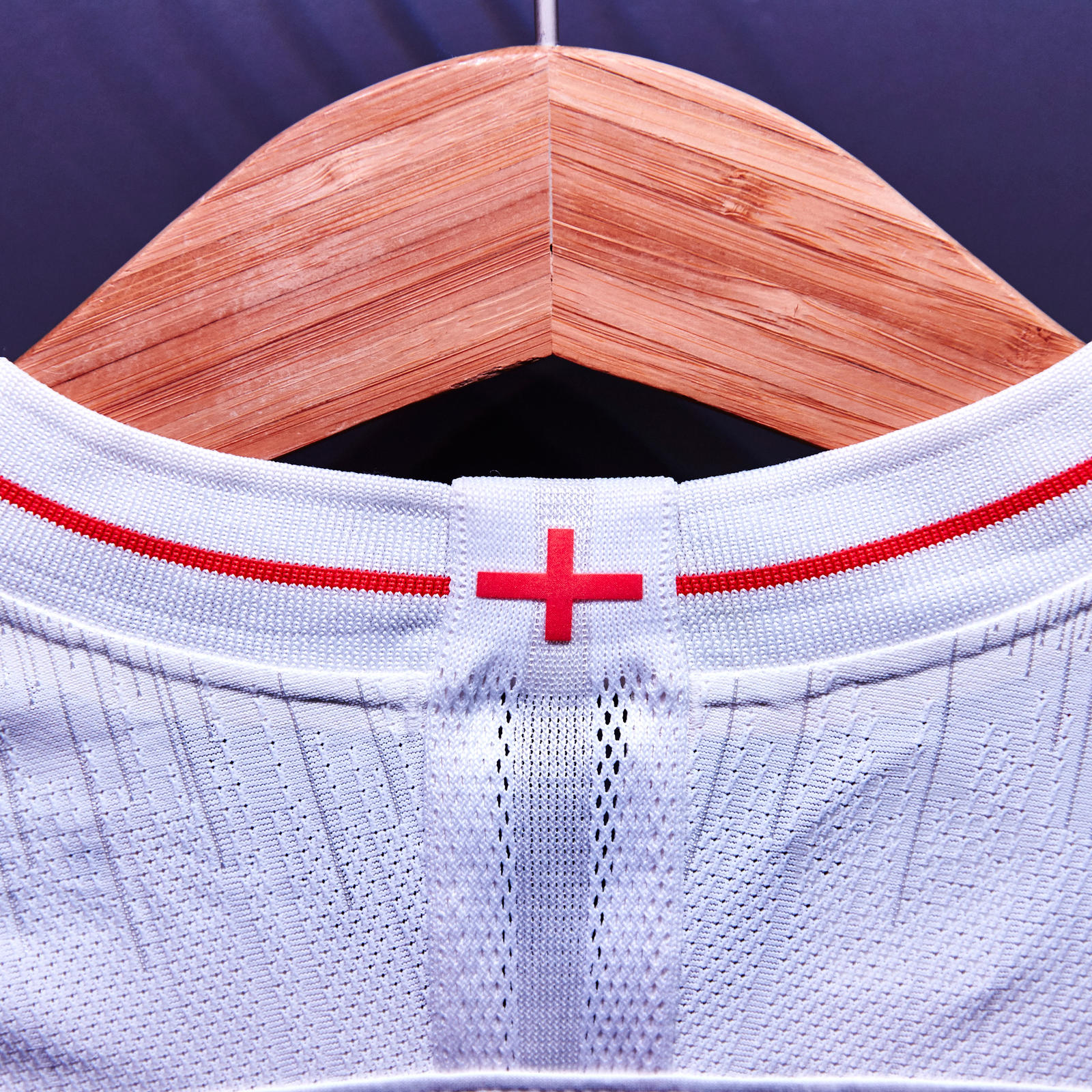 The St. George’s Cross features on the back neck

This classic look, white shirt with blue shorts, is accented by red trimming. The modern rib collar is backed by a small St. George’s Cross and a blue Swoosh on the chest that complements the famous Three Lions crest in its traditional colors. A star heralding English football’s greatest triumph sits above the crest in silver, completing the streamlined look. 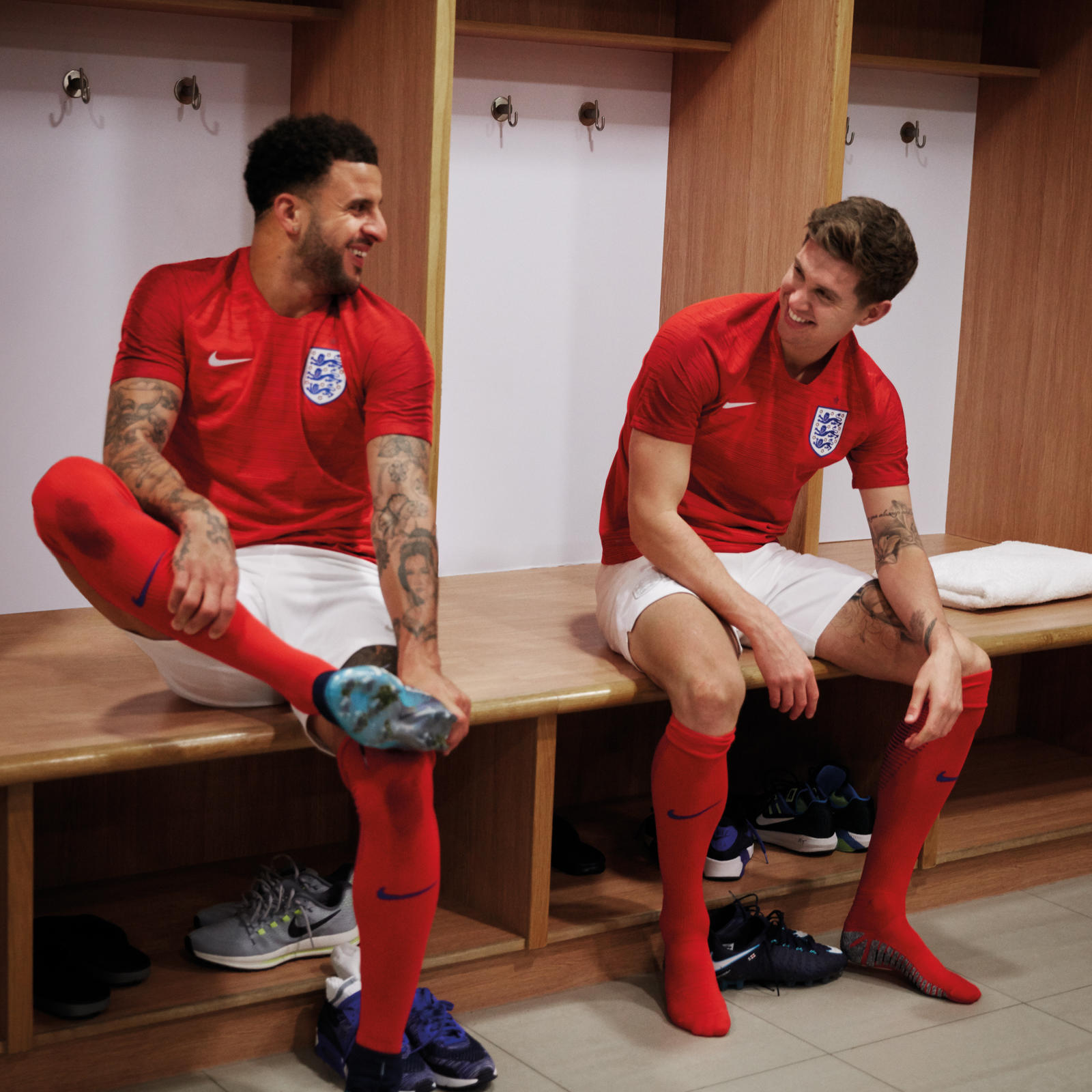 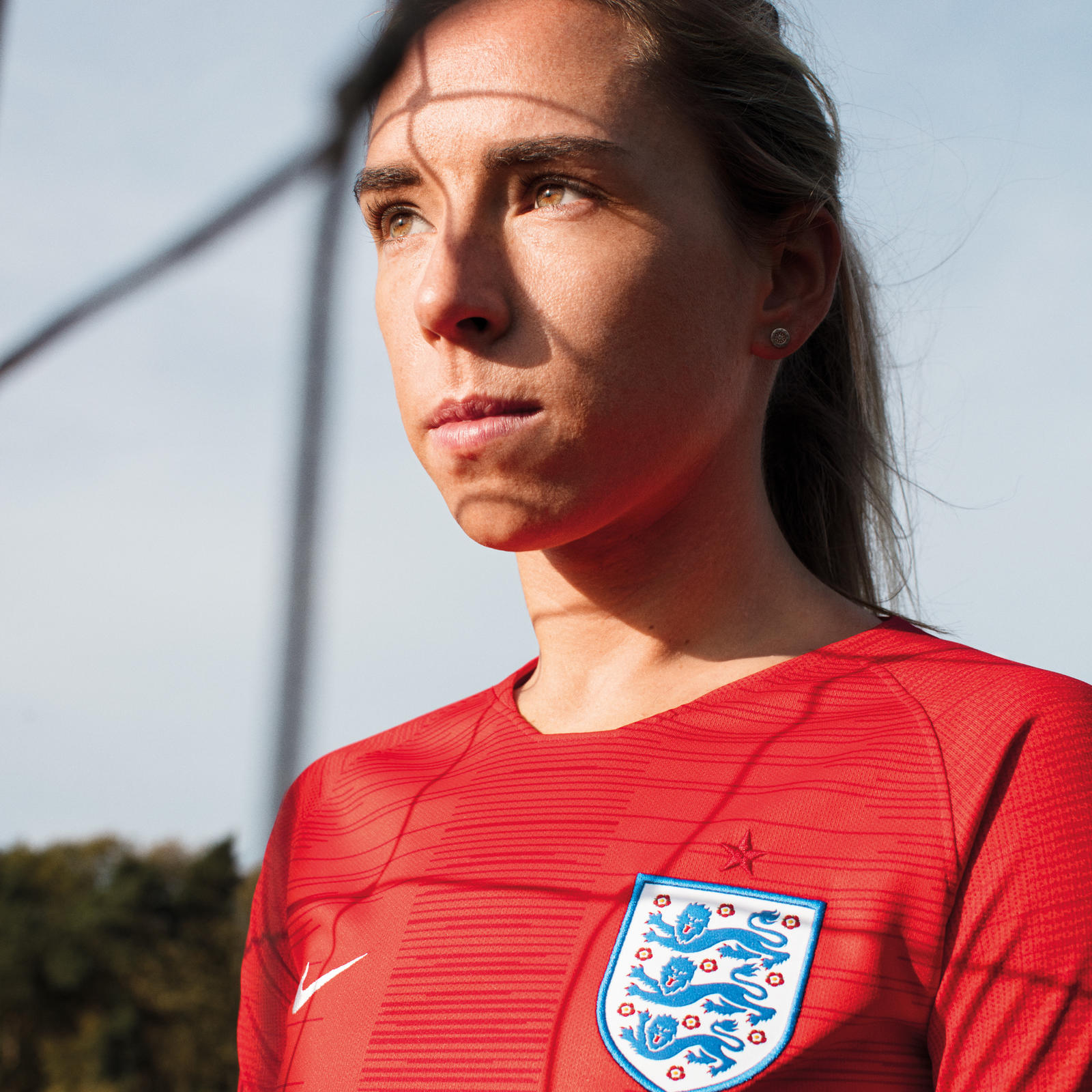 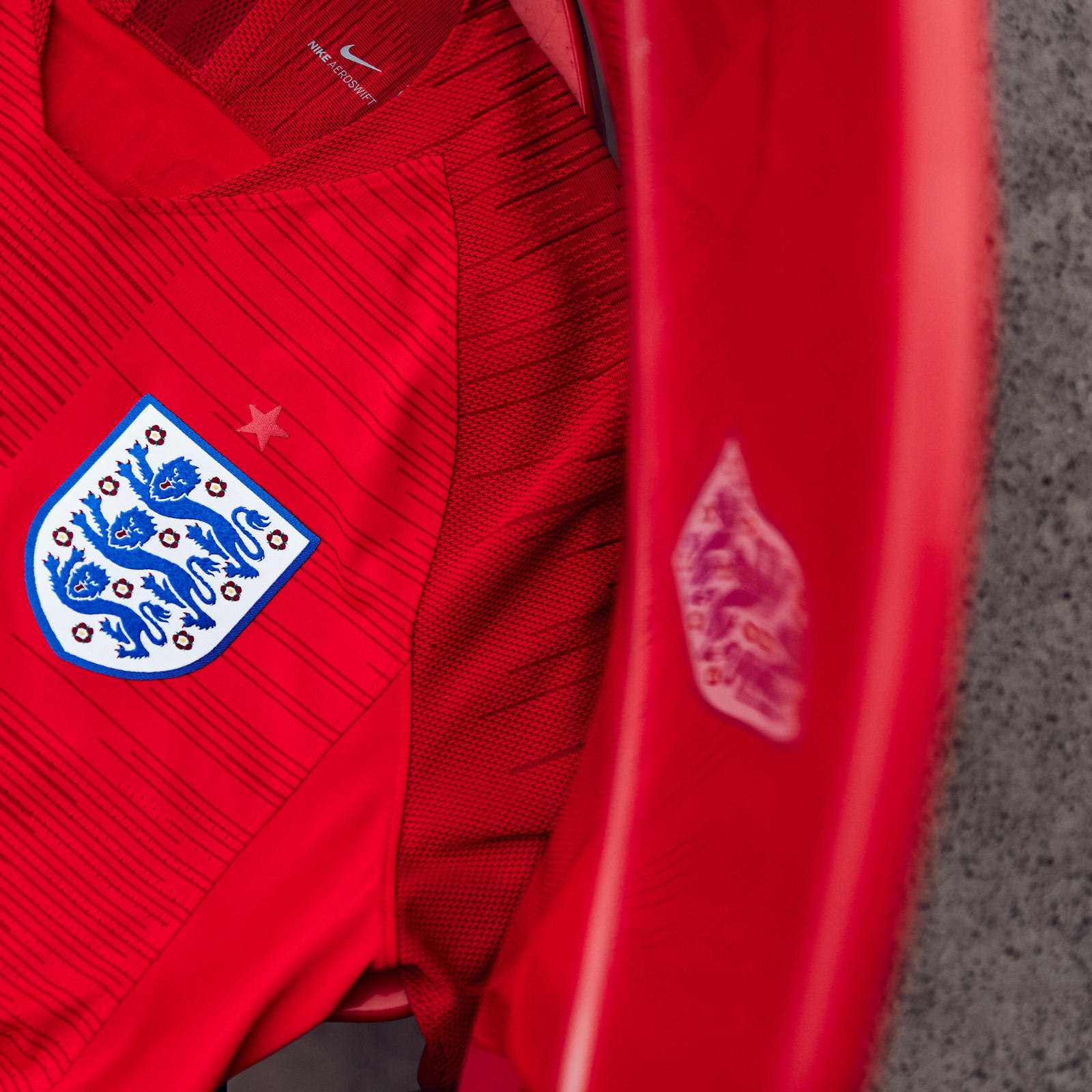 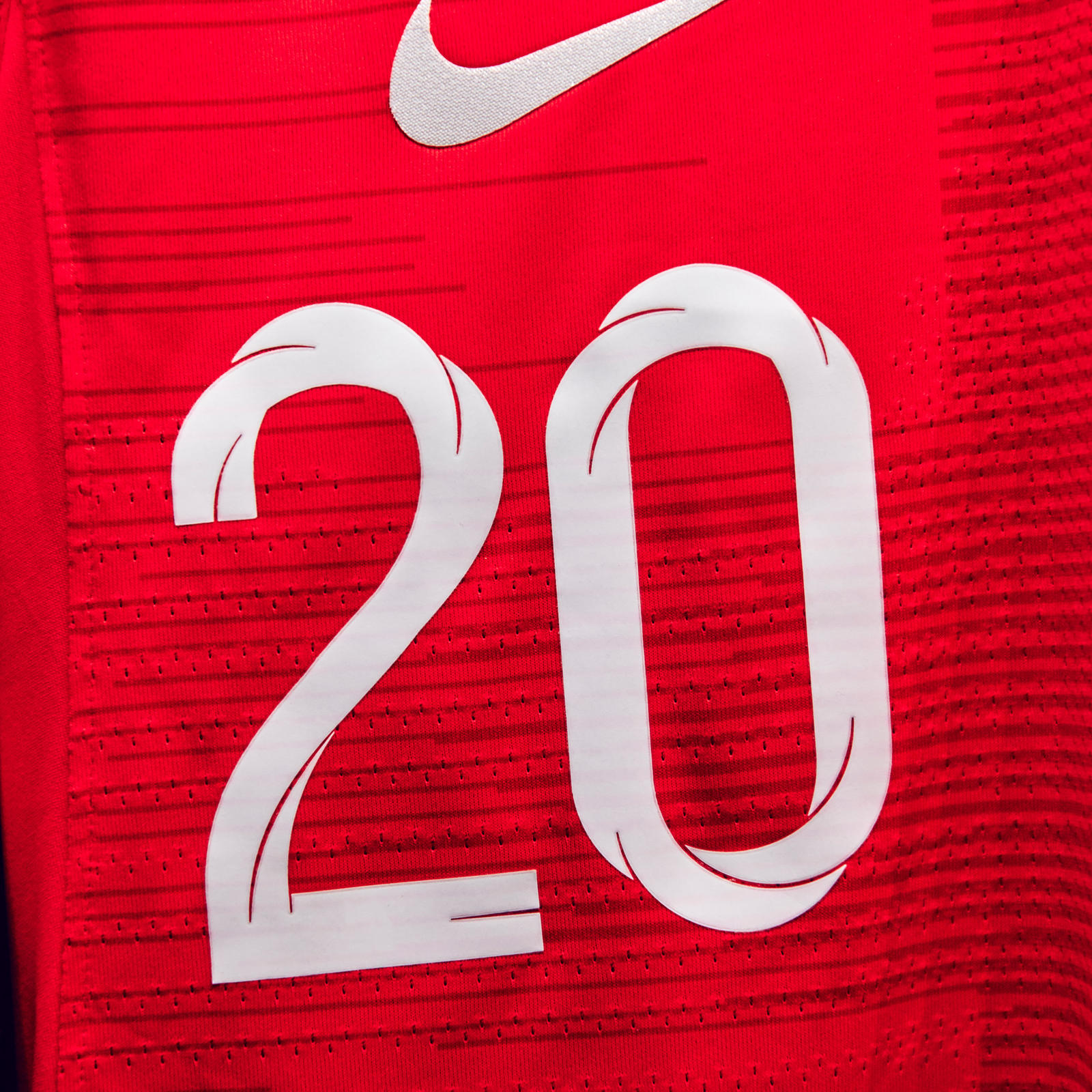 A two-tone red (a color that was immortalized in 1966) grounds the kit. The body of the shirt is dominated by a tonal graphic that depicts a modern St. George’s Cross. The two-tone stripes evoke speed to reflect the youthful wave of talent that is taking over English football and culture. White shorts with a pure white Swoosh and England crest and red socks finish the look. 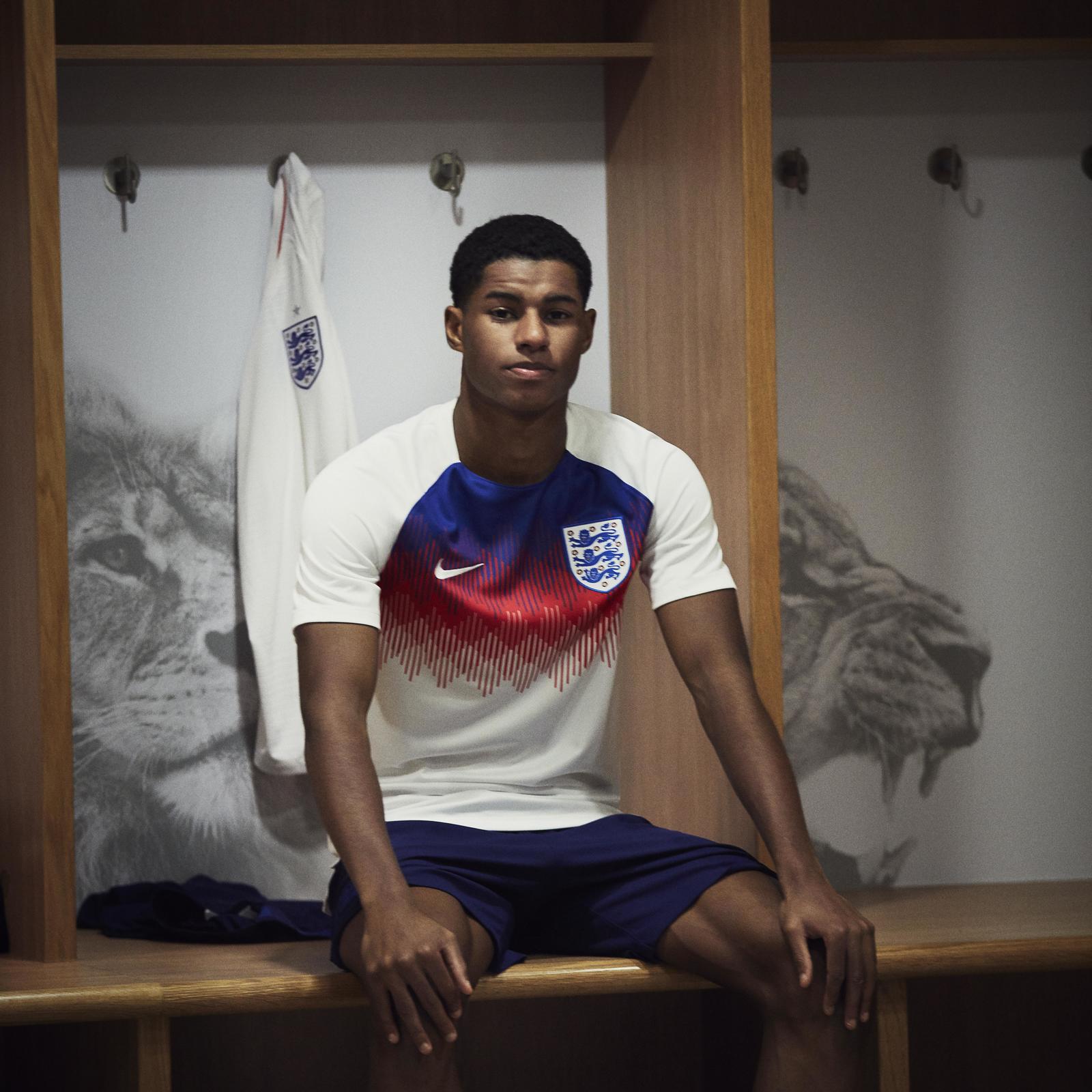 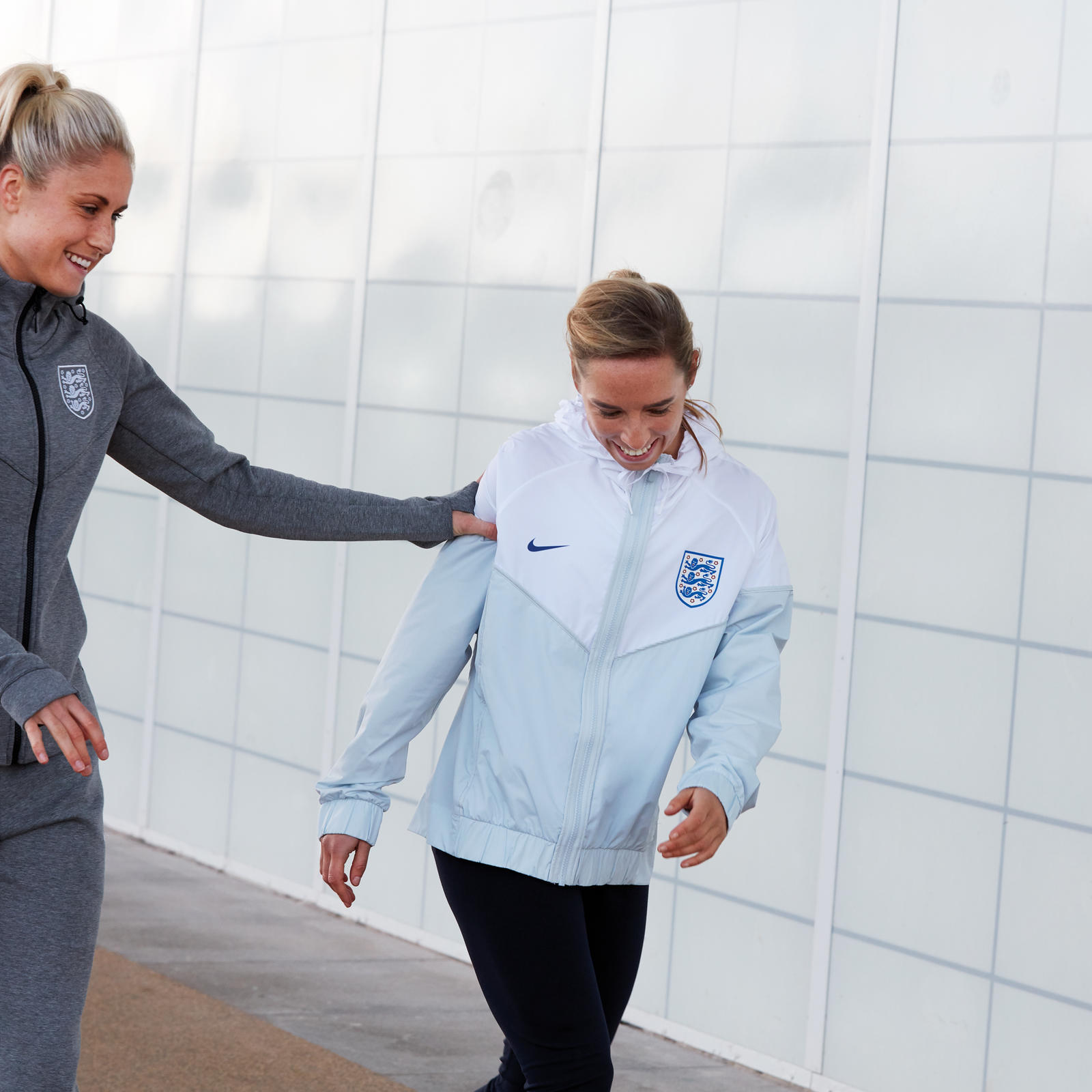 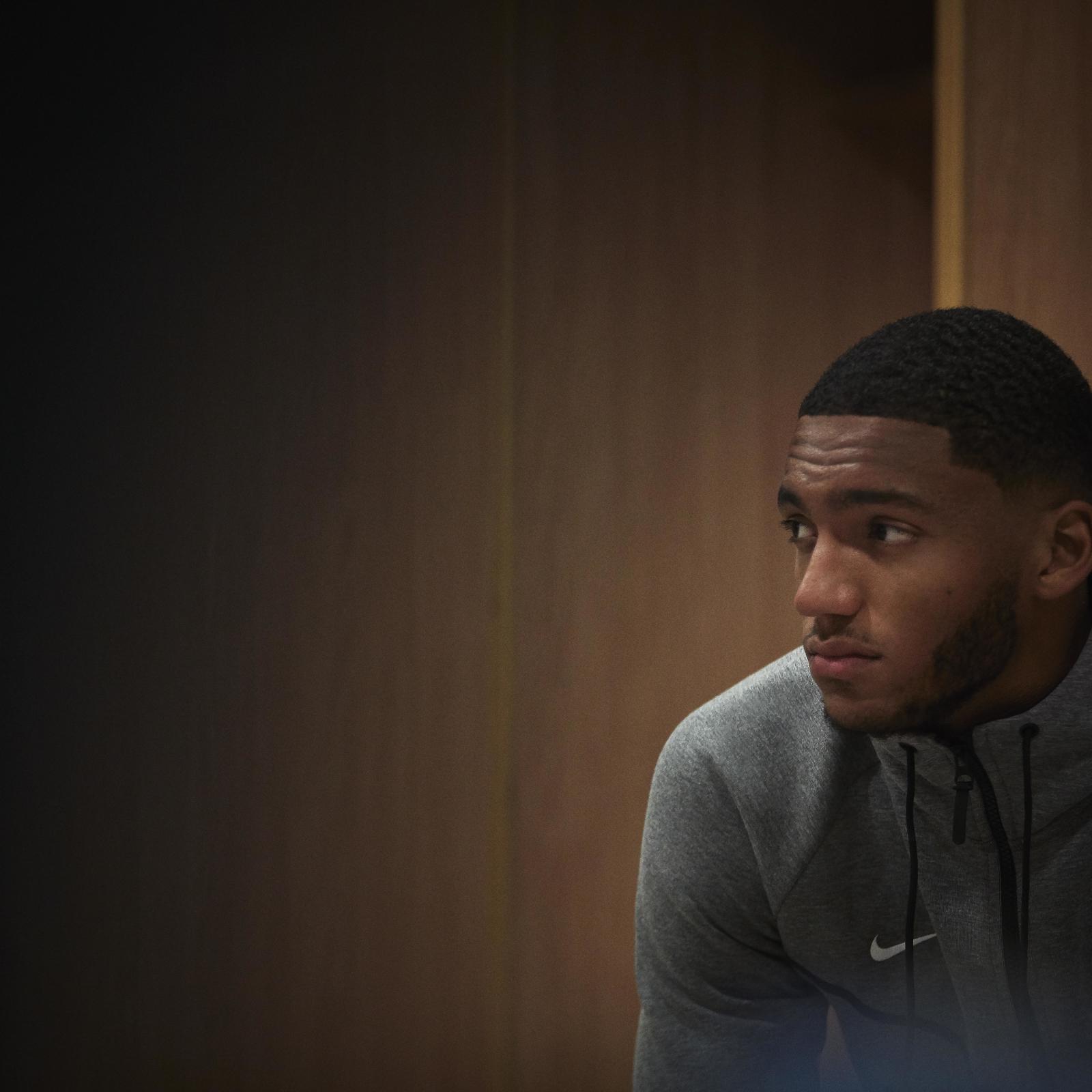 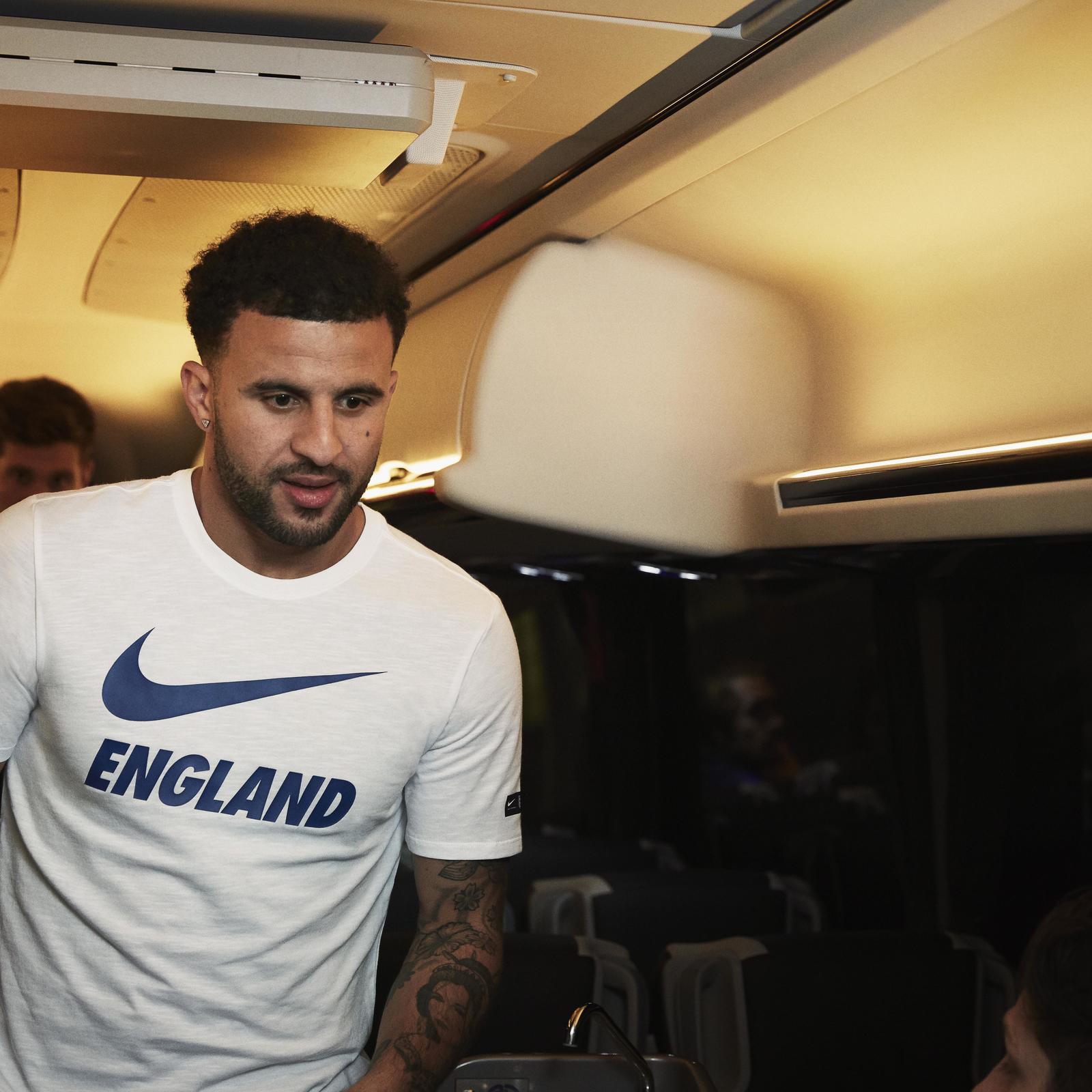 The senior men’s England squad will spend up to seven weeks on duty this summer, from the pre-tournament training camp through to their time in Russia. Each athlete will receive product for every point on their journey, from tailored Nike Sportswear Tech Fleece tracksuits to distinctive black and deep-blue training gear to a pure white Anthem Jacket to be worn as they walk out ready to compete for international duty in Russia. The pre-match top is a highlight, with odes to the FA’s 1982 look.