What the Doernbecher Freestyle Program Means to the Sneaker Community

It started out as an idea from Connor Doherty, the son of Nike Creative Director and OHSU Doernbecher Foundation board member Michael Doherty. His suggestion — enabling the hospital’s young patients to engage their imaginations by designing their very own Nike sneakers — formalized in 2003 as the OHSU Doernbecher Freestyle program. Fourteen years and 85 patient-designers later, his idea has raised $17 million for the hospital, brightened the lives of countless kids and caught the attention of sneaker lovers and collectors across the country.

Though the silhouettes change, the collection always features six shoes, and each year the launch is as highly anticipated as that of many other limited-edition Nike shoes. For example, since first including Jordan in 2007, the Doernbecher program has reworked Jordan shoes 1 through 10 and the 13. Several have been worn in league games, Cole Johanson’s AJ III has been retroed and all of them are still highly sought after. 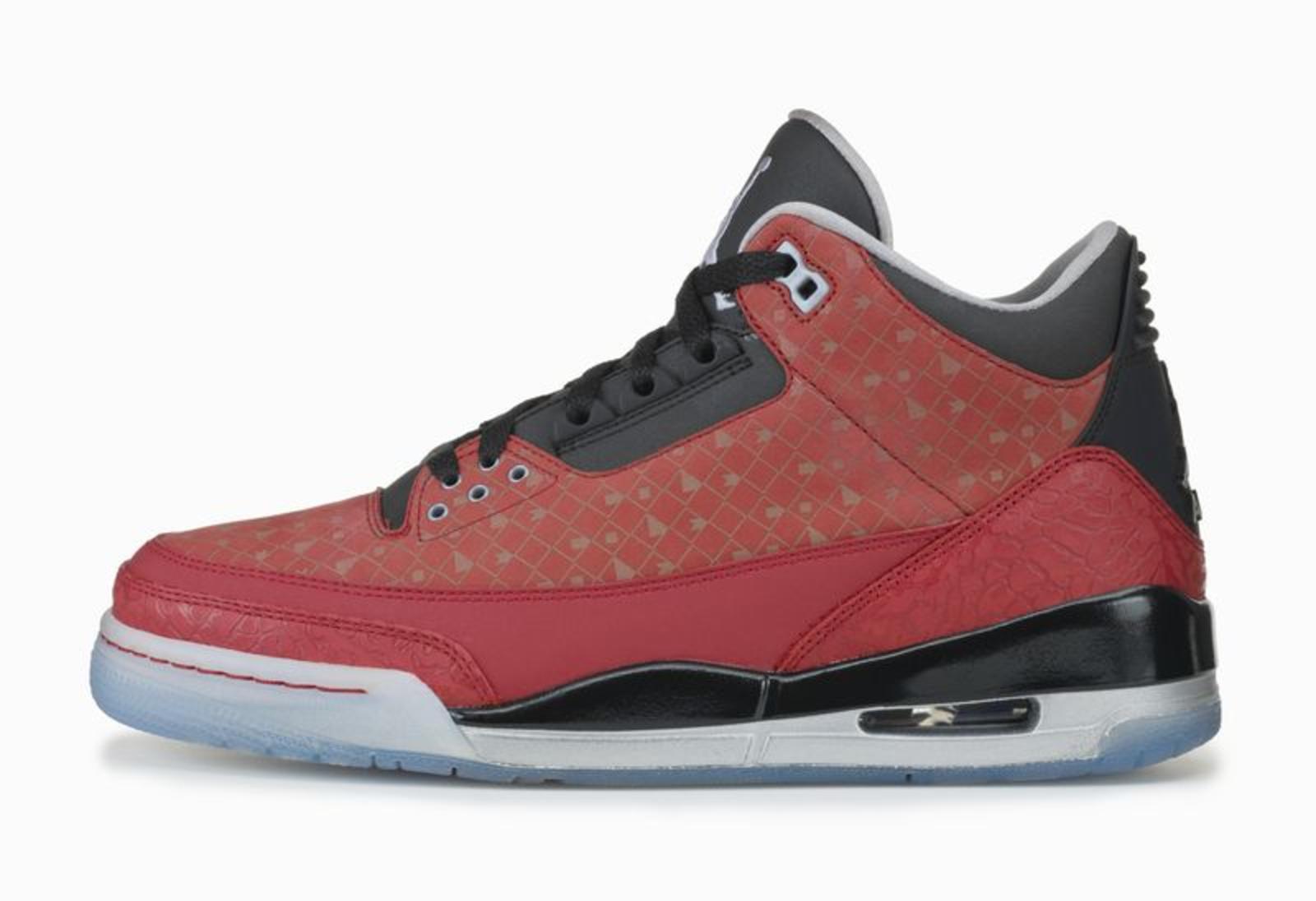 “The Doernbecher III [the Nike Air Jordan III Retro DB] is amazing. It is probably one of the best all-red sneakers around,” says famed collector DJ Clark Kent. “I got multiples both times it released.”

More than anything though, the Doernbecher Freestyle program has put “Doernbecher” into the vocabulary of sneaker aficionados worldwide. It’s something to look forward to every October, as important to any sneakerhead as the start of the basketball season. Most of them won’t get any closer to the hospital than through a pair of shoes in their collection, but they can hold one patient-designer's story in their hands and read it whenever they wish.

“For sneakerheads, there’s always going to be the initial buzz about what specific silhouettes are getting special colorways that year, but it’s the cause and awareness that counts,” says Joe La Puma, Complex’s VP of Content and host of its Sneaker Shopping. “It usually has an instant-classic special make-up every year, and the fact that kids from the hospital design these rare sneakers adds actual substance to the hype.”

Many collectors agree with La Puma, and some go so far as to say the cause trumps all. “This might sound strange, but from a sneaker perspective I don’t even care what the designs look like,” says Kent, who owns 38 Doernbecher shoes. “These kids are given a chance to be creative, and the money goes back to finding a cure [specifically expanding pediatric research and supporting clinical care], and for that alone I support it.”

In addition to including Jordan Brand sneakers, the program has continued to expand, adding apparel in 2013 and broadening to include a high-performance University of Oregon football uniform in 2017. Each year, the collection is revealed via a live auction, which serves to both introduce the patient-designers and raise additional funding by selling unique versions of that year’s shoes. Last year’s auction raised a record-setting $1.2 million. A single pair — a Nike Air Jordan VII designed by Damien Phillips and signed by Michael Jordan himself — went for $46,000. 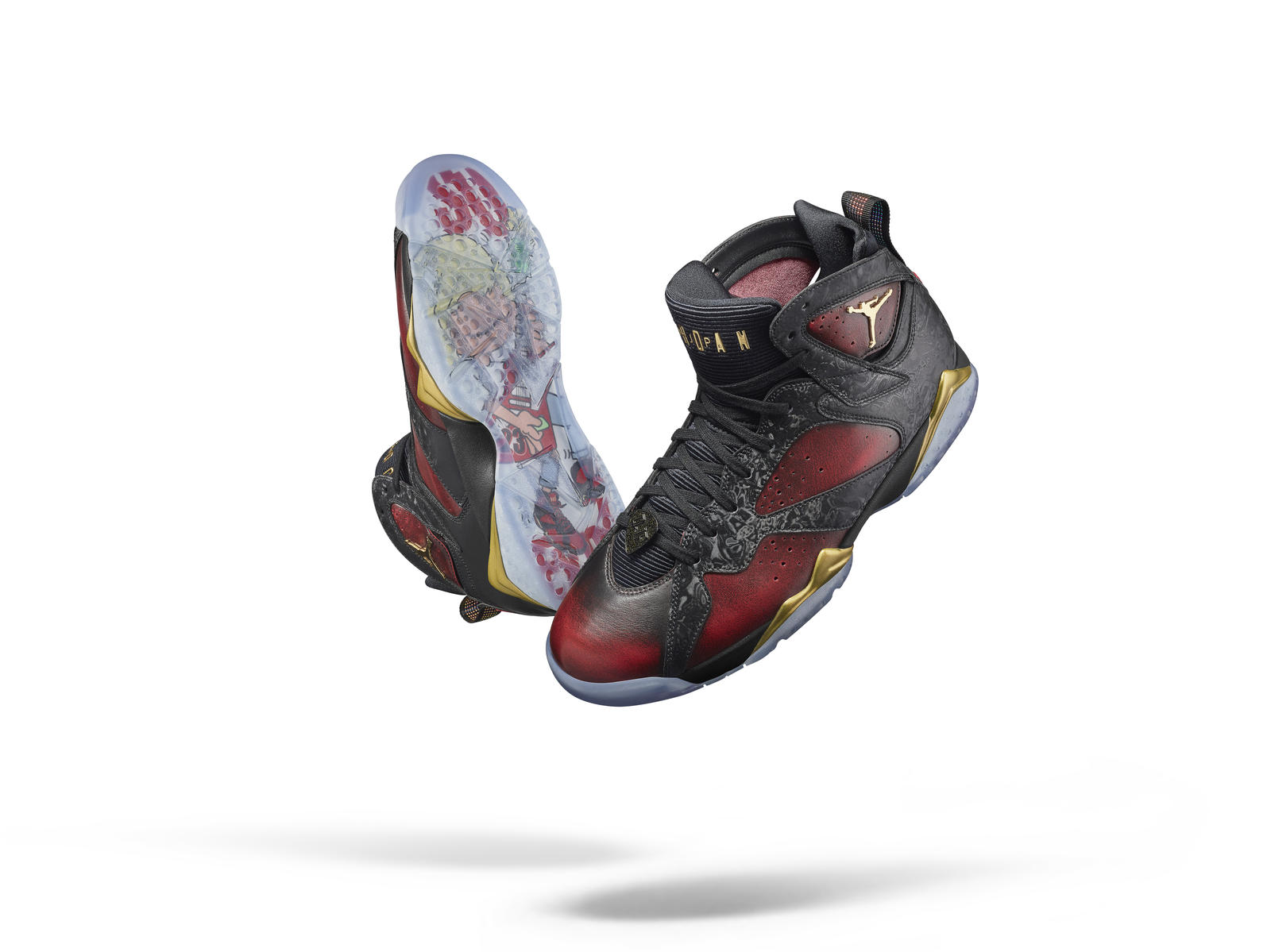 Although Jordan silhouettes tend to get the most attention from sneaker media and connoisseurs alike, the Doernbecher program has spanned categories from SB (where it all started) to basketball. Models worked on have ranged from the Nike Zoom Air Angus SB (in all-over green elephant) to the Foamposite One (in a glossy red over black, complete with a removable flight tag) — each managing to hit both a sneaker culture zeitgeist and fall naturally into the program. Runners have been well represented, thanks to two versions of the Nike Air Max Zero that were included last year. This year will see the addition of the Nike VaporMax and the Nike Air More Uptempo.

And all of this — from inviting patients in February to debuting the shoes in October — takes just eight months. Though that may seem like a slow process to outsiders (or even the patient-designers themselves), this happens relatively quickly in sneaker design terms.

While they don’t stay on retail shelves for long, Doernbecher shoes from since the program’s inception remain available on the secondary market. This keeps the shoes—and the stories — alive. Isaac Arzate’s Nike Air Jordan V Retro from 2012 in particular resonates. Arzate passed away before the shoe was fully designed and the finished product, a gleaming Jordan V that featured Isaac’s poem revealed under black light as well as his baseball and basketball numbers embroidered on the outer heels, was dedicated to his memory. Every time a pair of those Vs are worn or sold his story spreads. 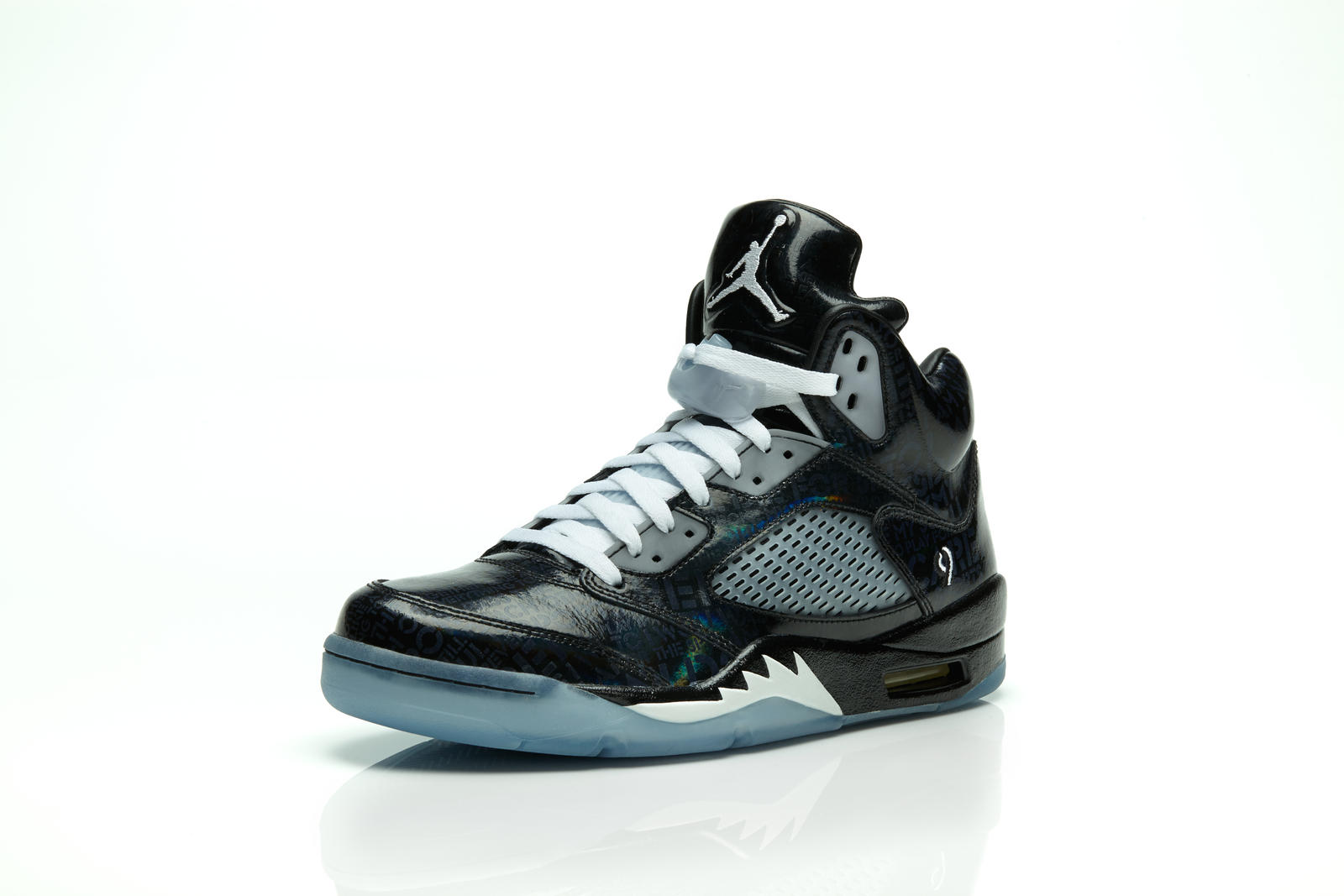 The Doernbecher Freestyle program has been going on long enough where those who first bought them as kids — as well as most of the patient-designers themselves — are grown now. And many of the nation’s biggest sneaker fiends likely can’t remember a sneaker world that didn’t have Doernbecher in it. 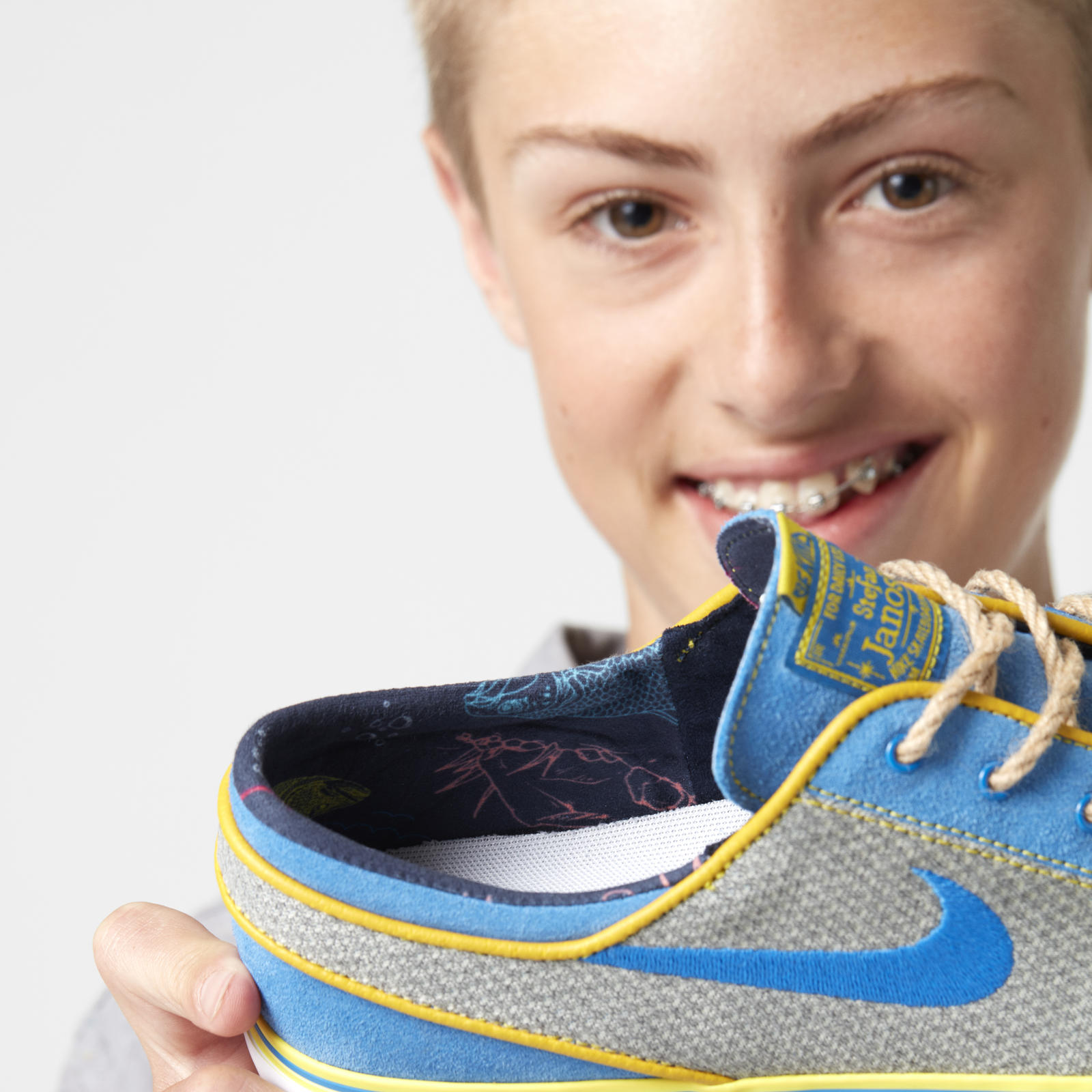 Because he thinks every fisherman needs a good fishing shoe, Hibbard designed his shoe with nautical details. A school of trophy fish swims against a deep blue background. 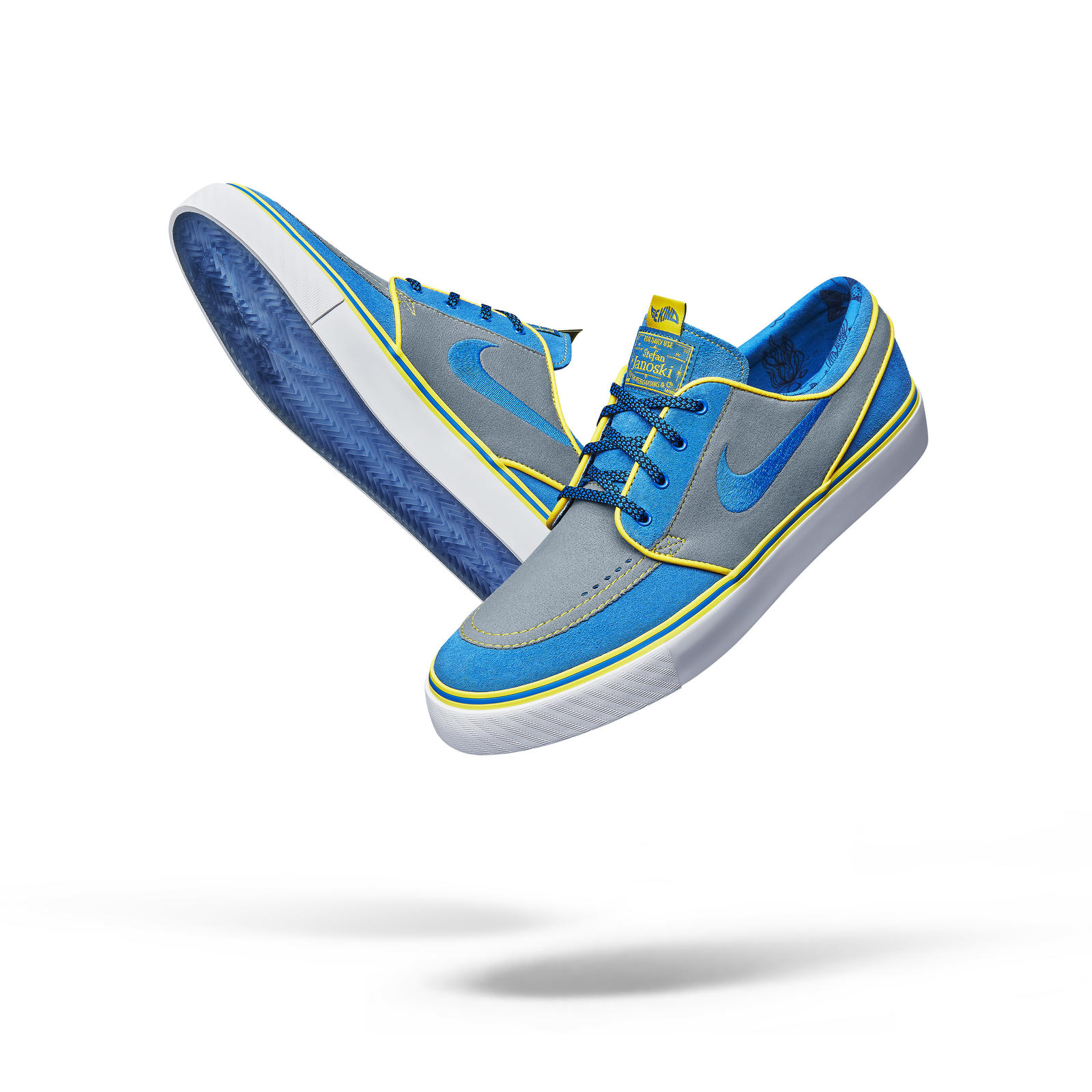 The clear sole is intended to make the pattern appear as though it's underwater. He included his mantra, "Be Kind," on the tab. 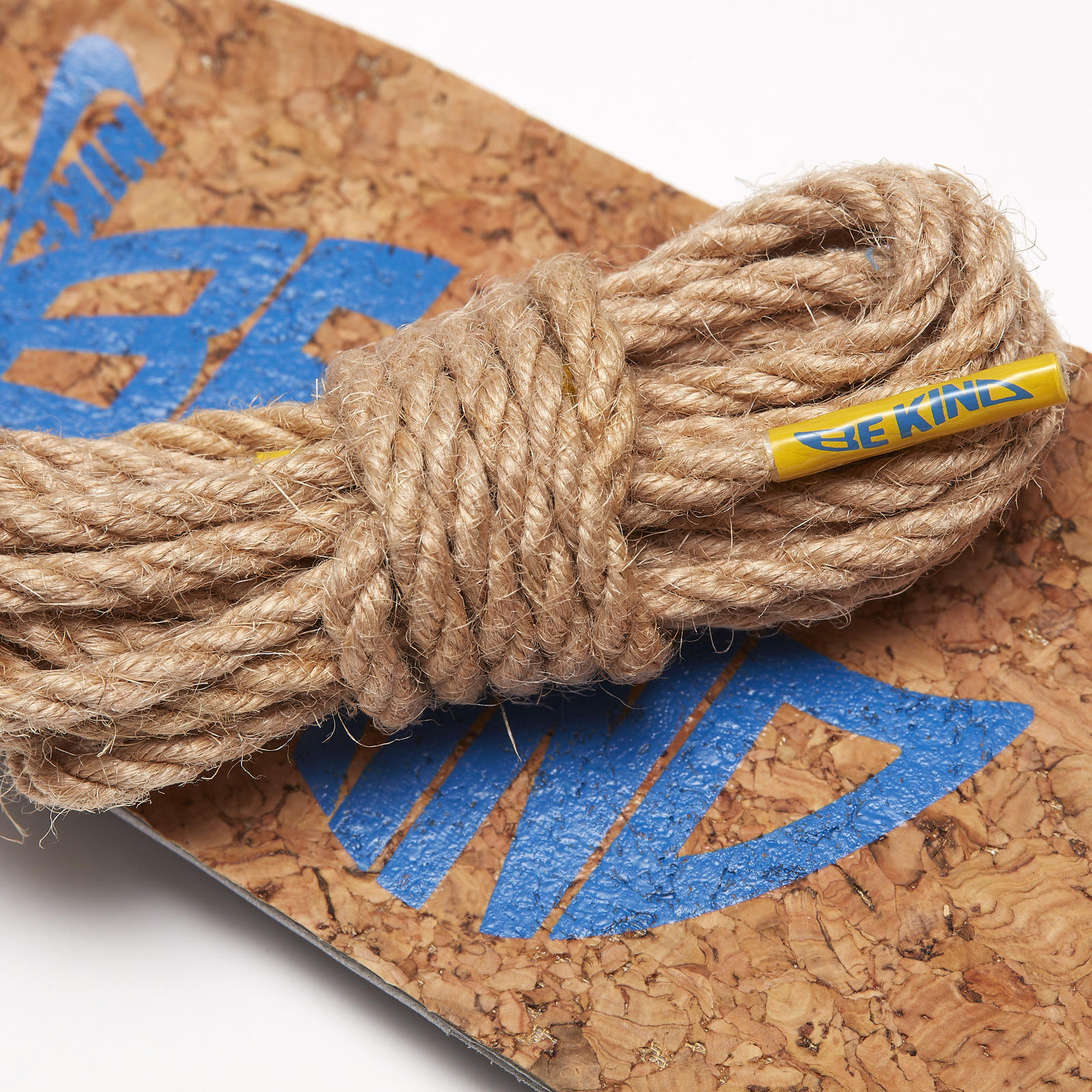 The laces emulate the ropes used to tie boats to the dock and the sockliner represents a cork bobber. (Consumers will have lace and sockliner options.) 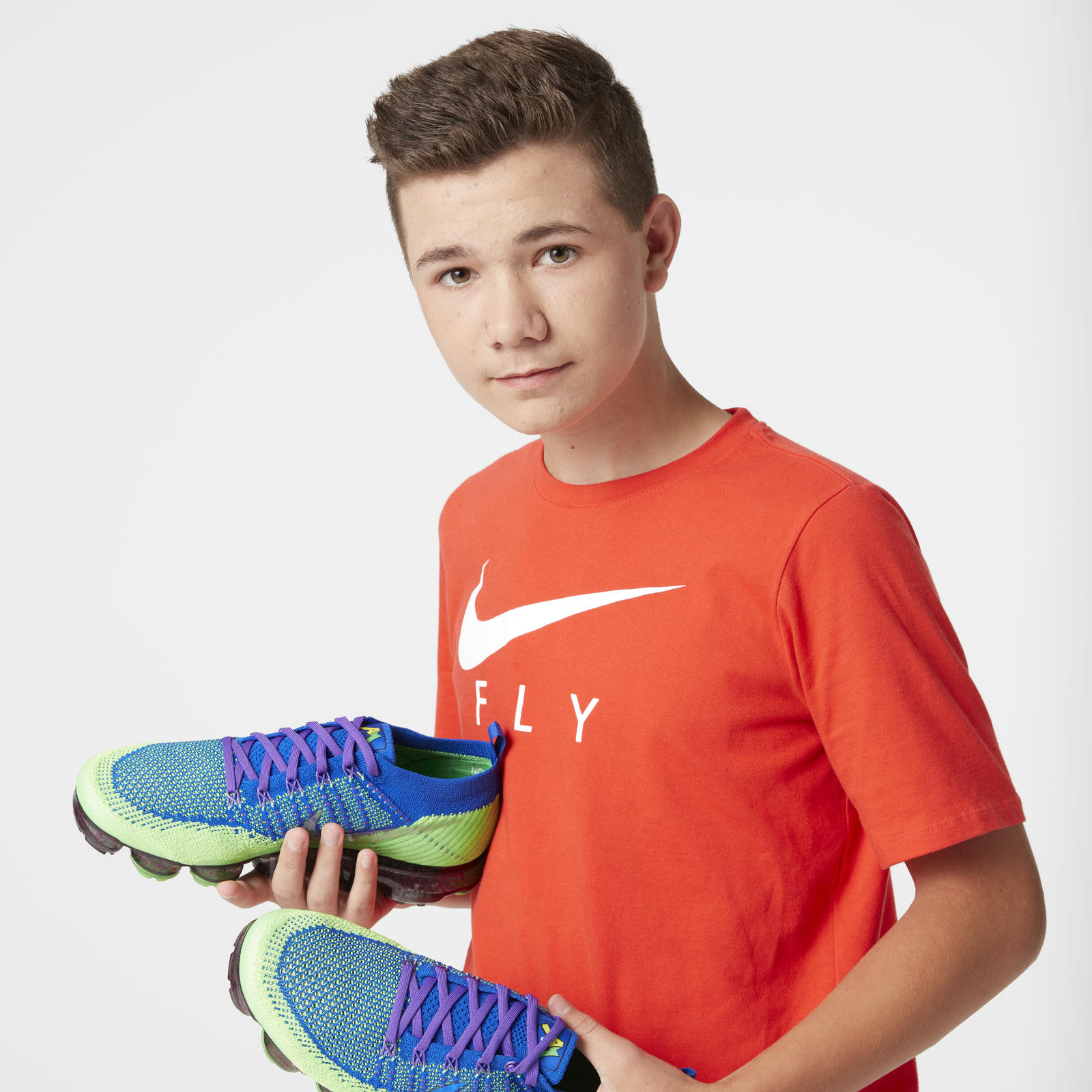 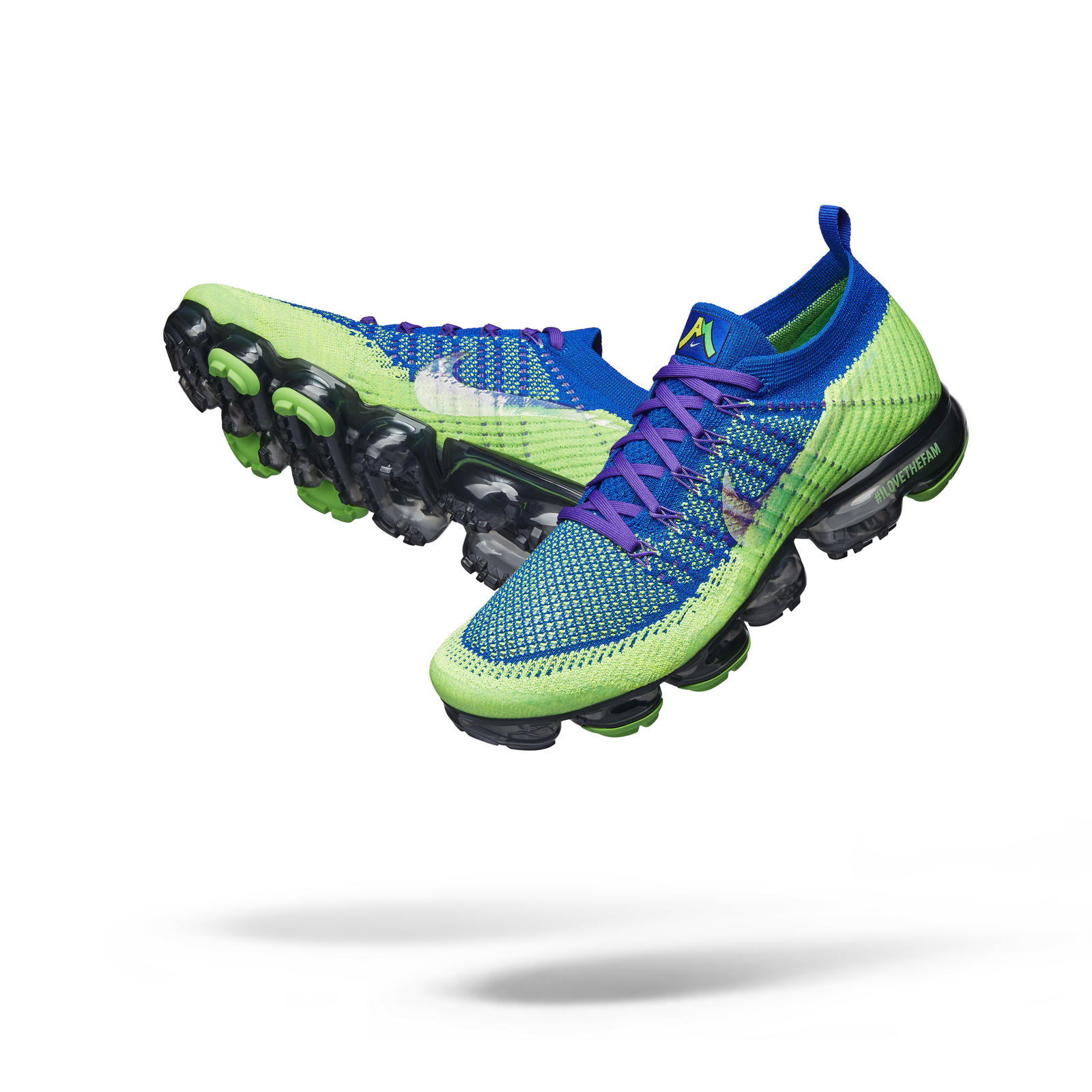 The green also represents his love for his favorite college and professional football teams.“He definitely has a talent for graphic design!” his designers recall. 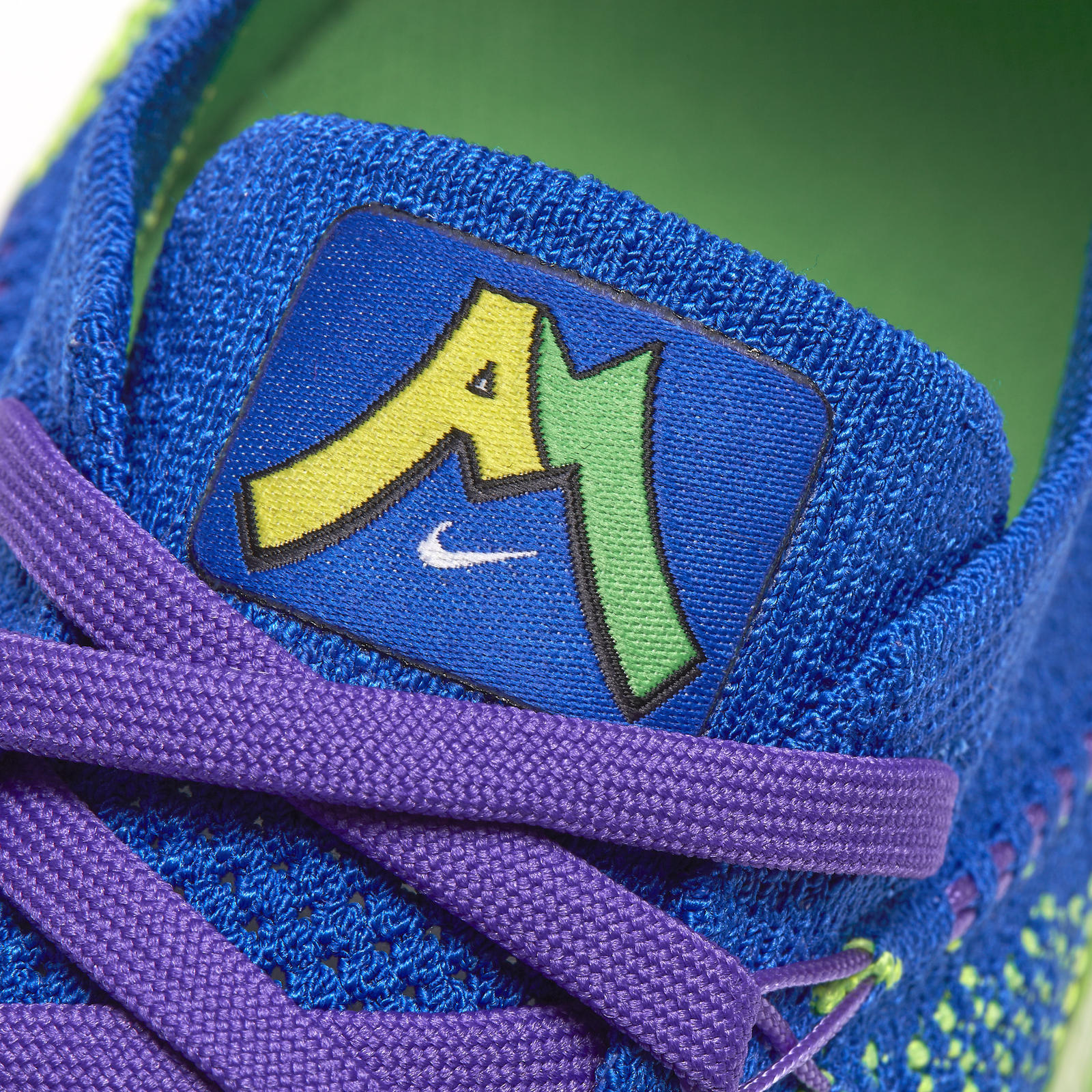 His initials can be found in a custom logo on the tongue of each shoe, a logo that his Nike design team said he brought to his very first meeting and one that went straight from his sketch to his shoe. 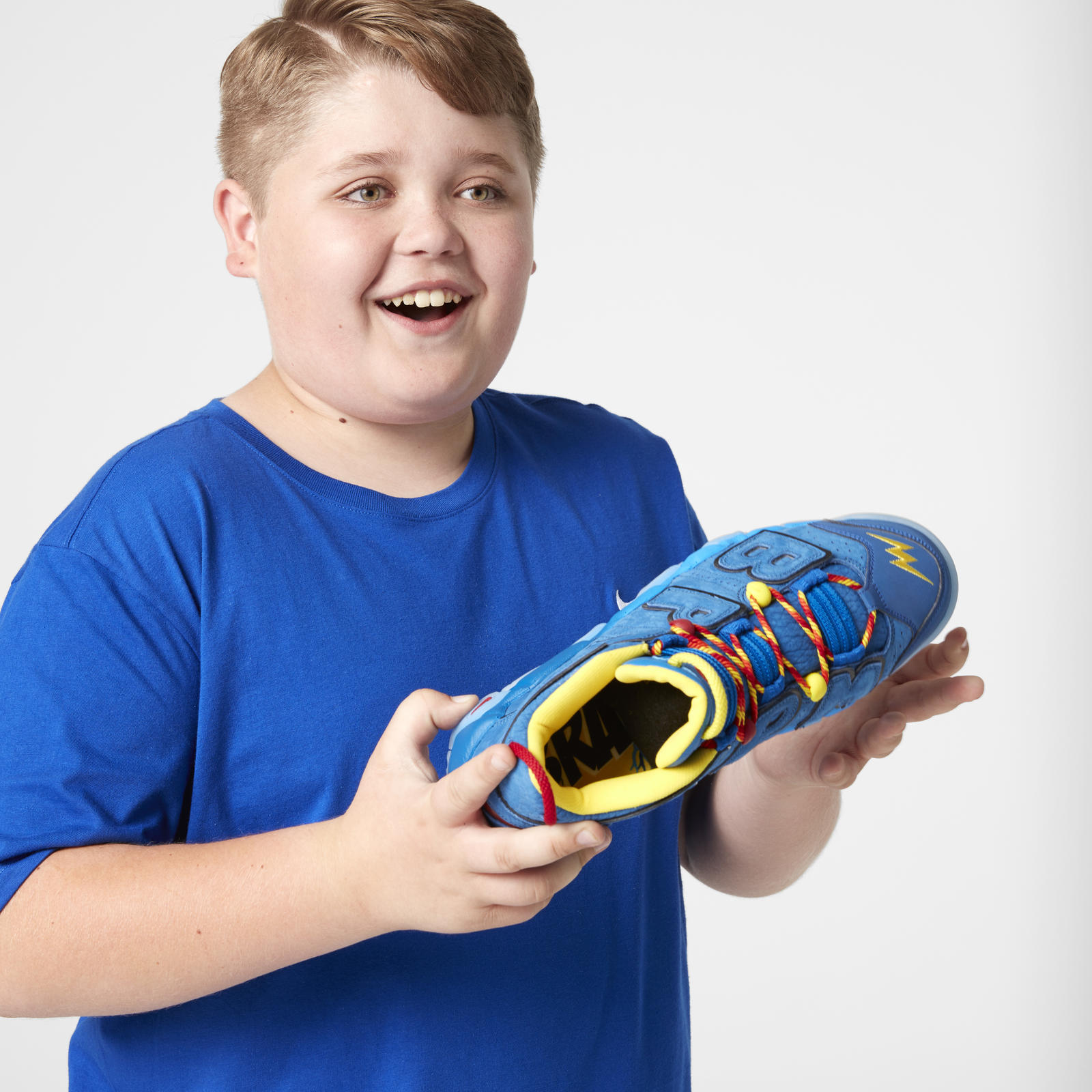 Miller's rare brain condition is a villain he battles every day. To help him in the fight, the aspiring comic book artist created Generator Man, an alter ego who shoots healing energy out of his hands. 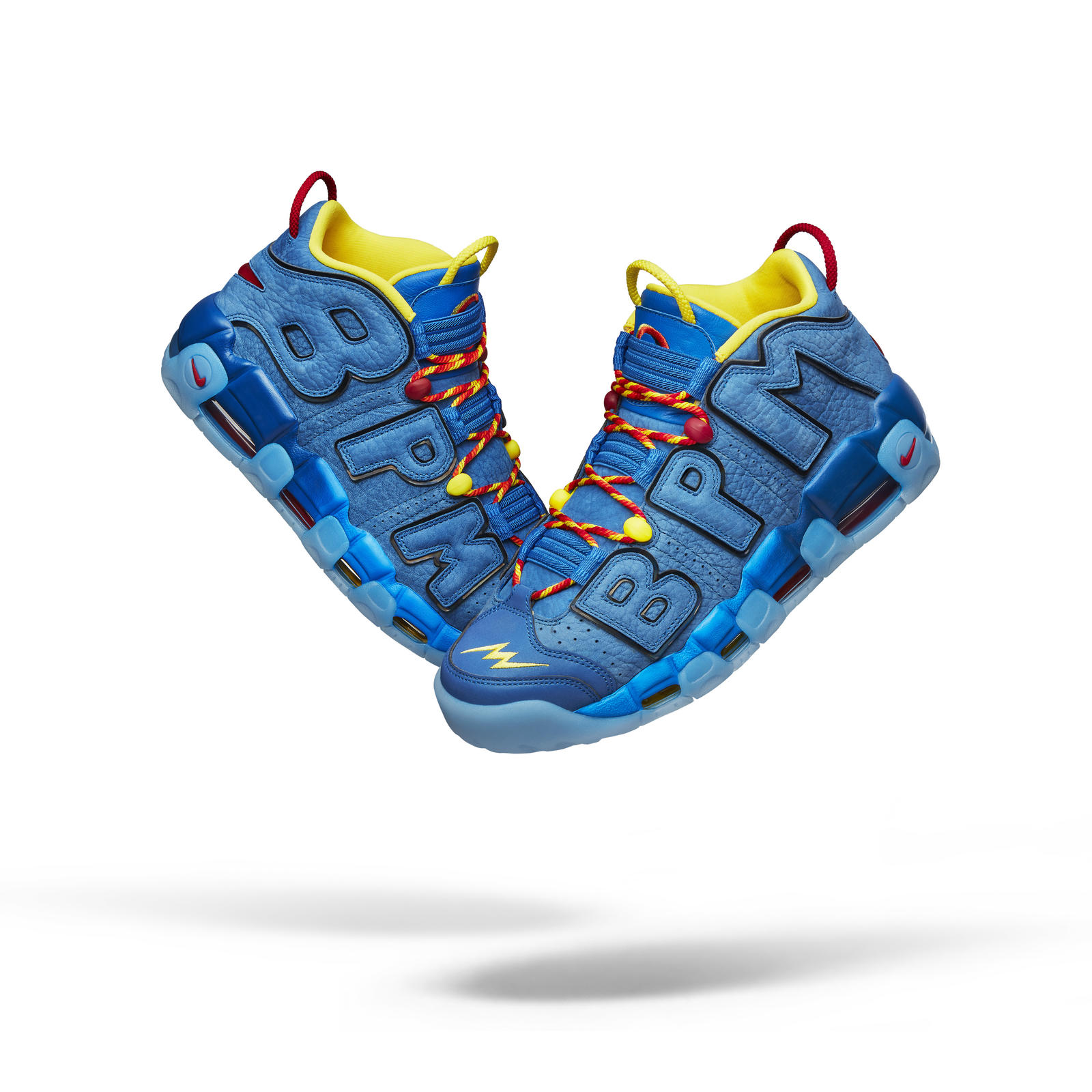 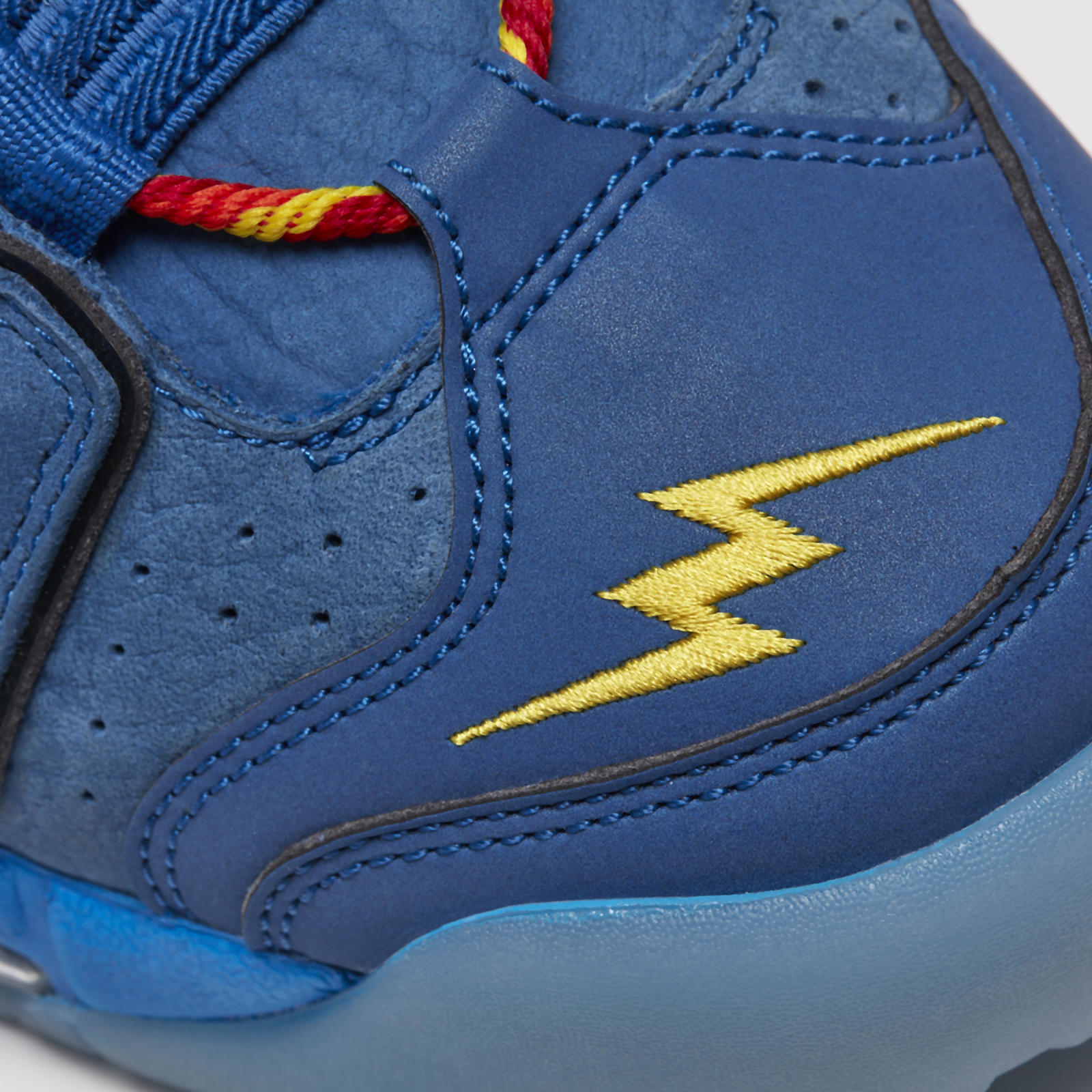 Each forefoot has a lightning bolt, while a glow-in-the-dark outsole reveals the words “Be Strong.” 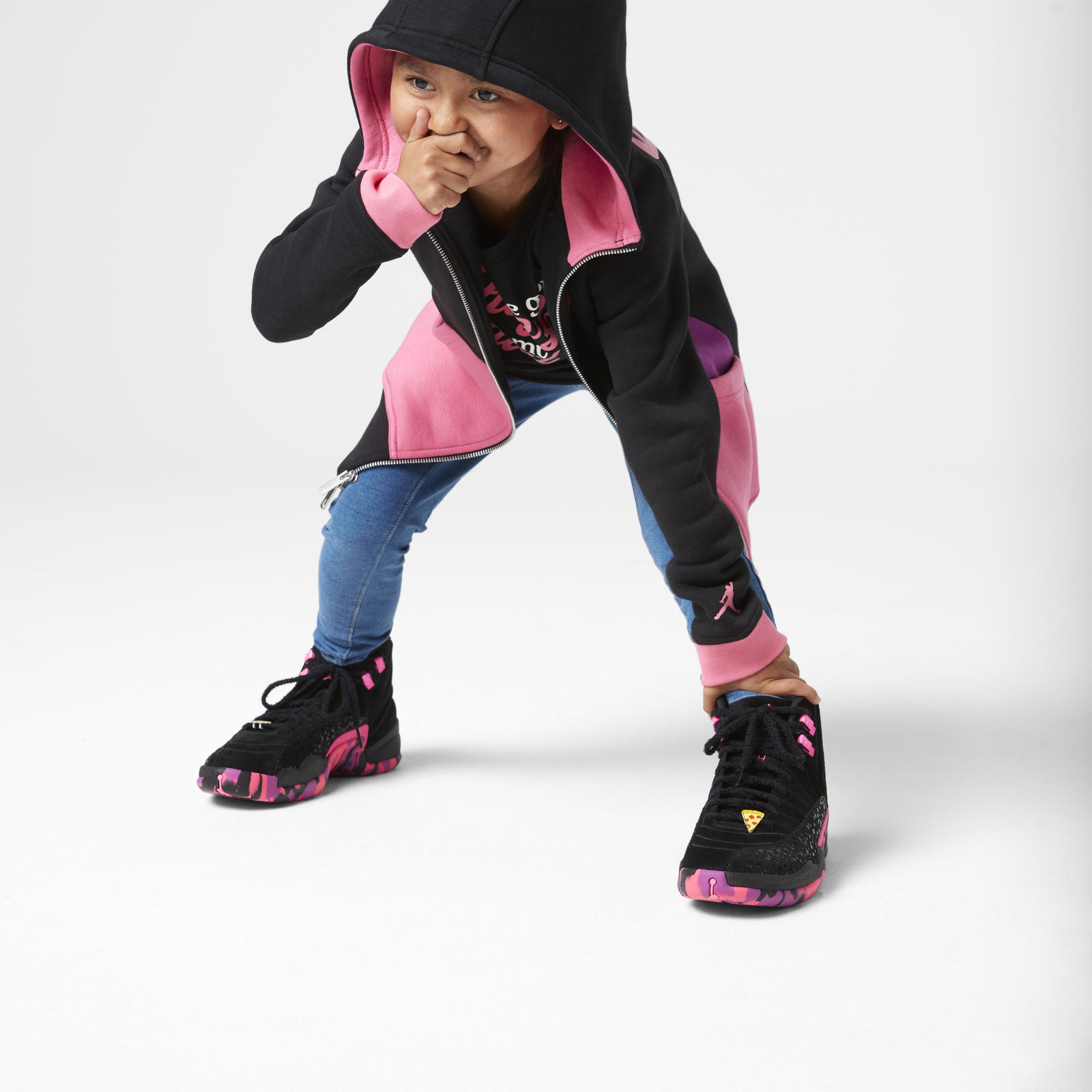 Her twin sister’s name, Savannah, is on the heel tab of the left shoe (Navarro was born without kidneys and her sister kept her alive in the womb until she could begin dialysis). “She’s the best sister ever!” she says. 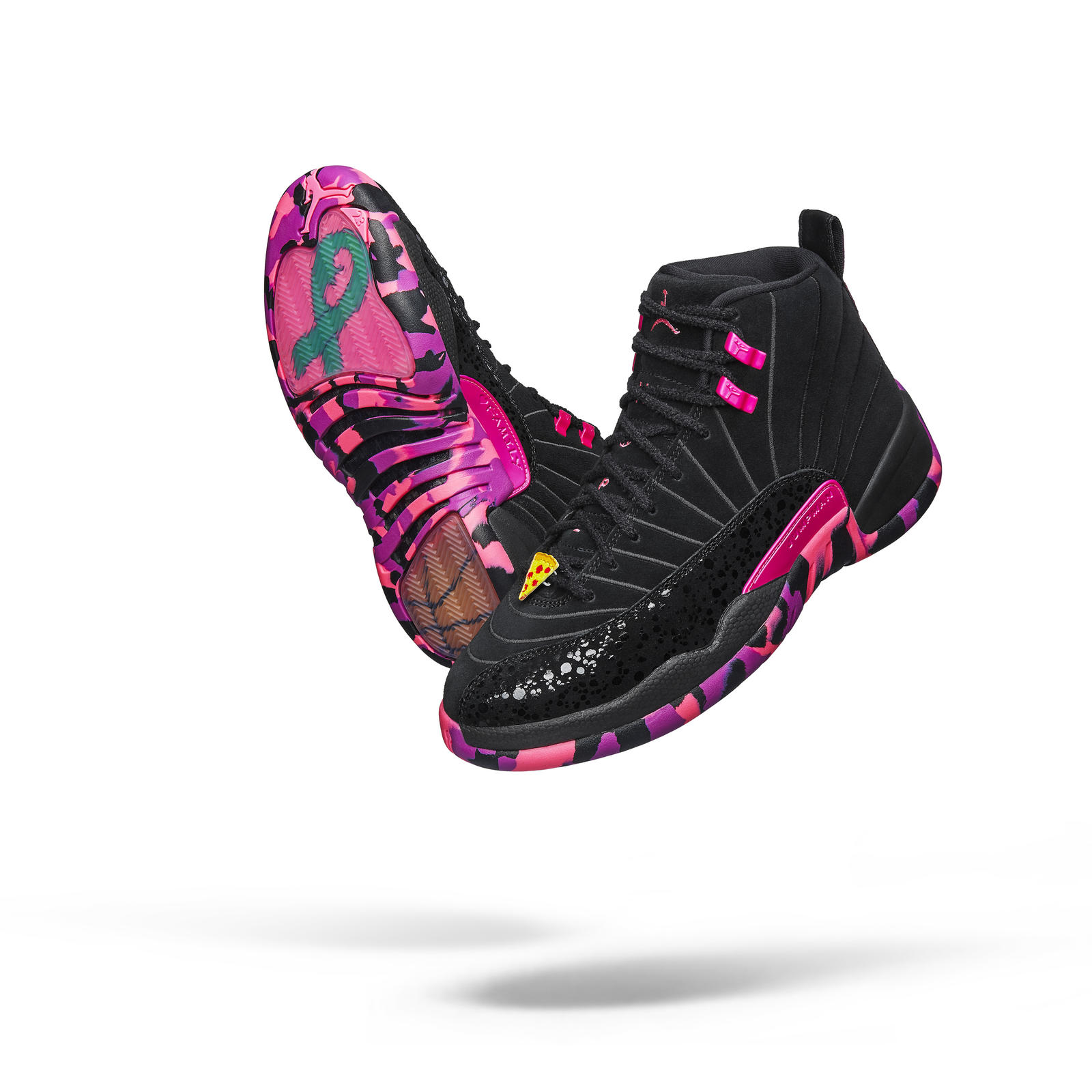 The outsole showcases things she loves, including her stuffed dog, Max, and her favorite sports. The black fuzzy material is intended to be a gift from Navarro to everyone who wears her shoe. “I always have a warm, fuzzy feeling in my soul, and I want everyone to feel the same way.” 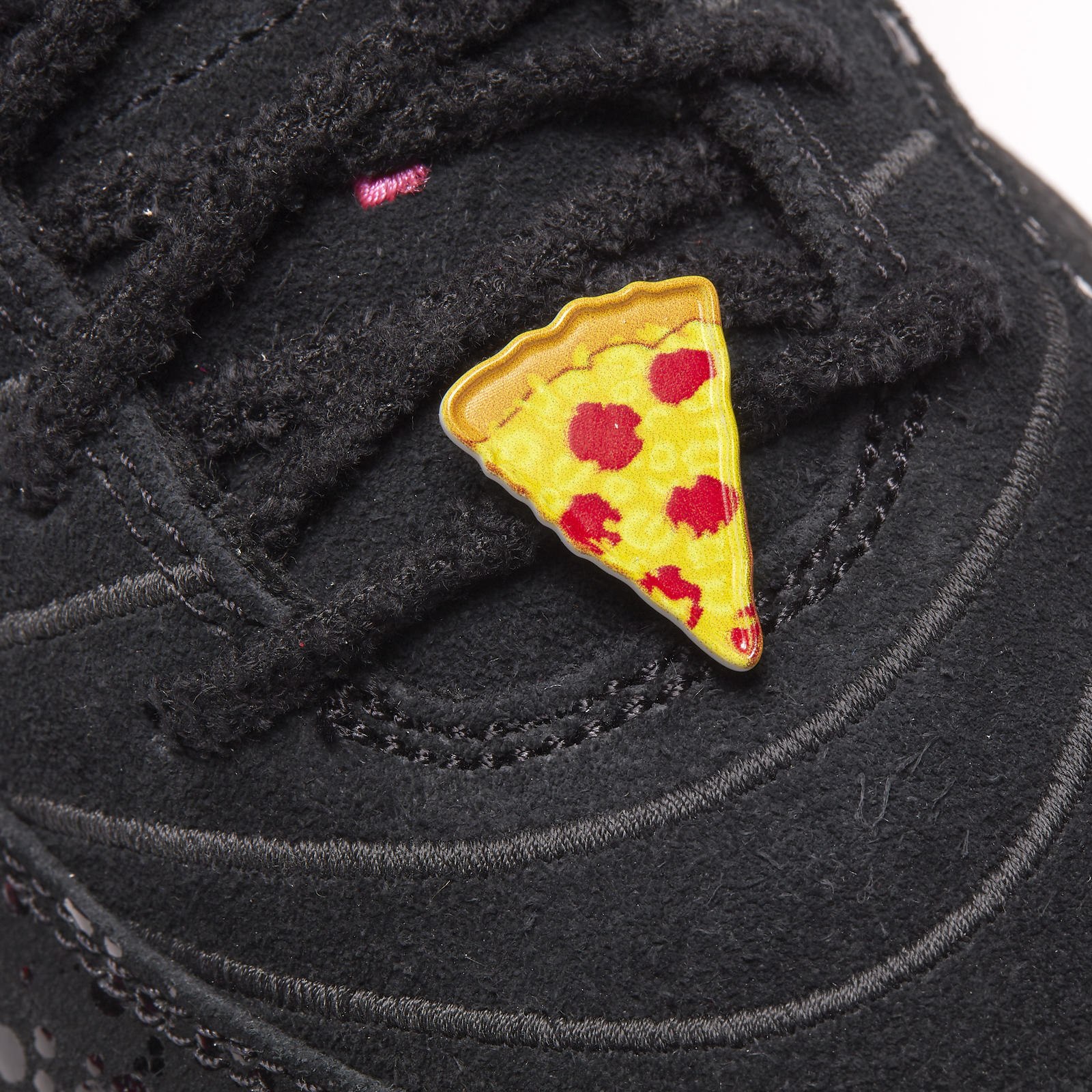 She finished her look with a pizza slice because, well, she really likes pizza. 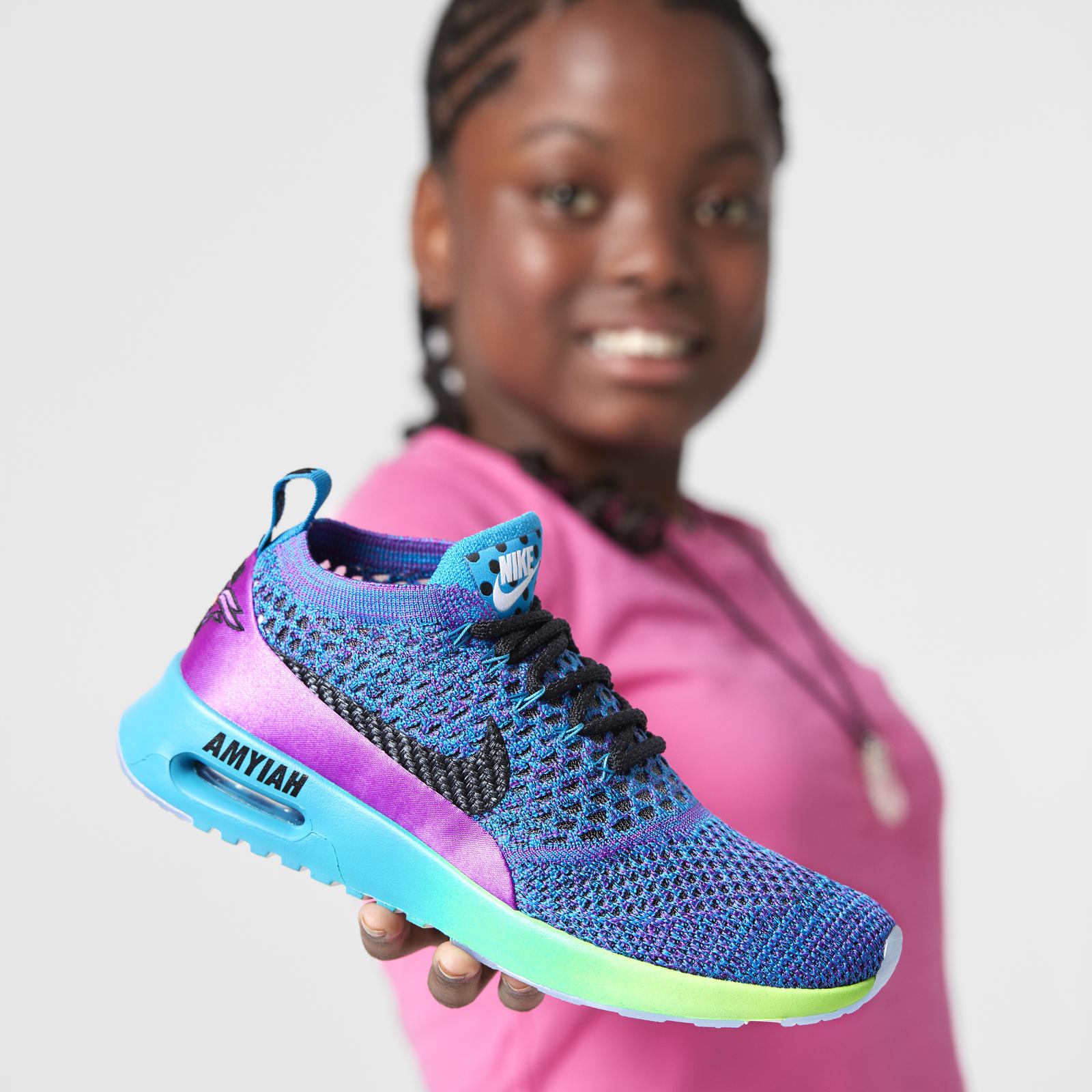 Robinson's colorful design includes a state map of Oklahoma (where she's from) on the insole of one shoe and a map of Oregon on the other to symbolize the importance of staying true to her roots. 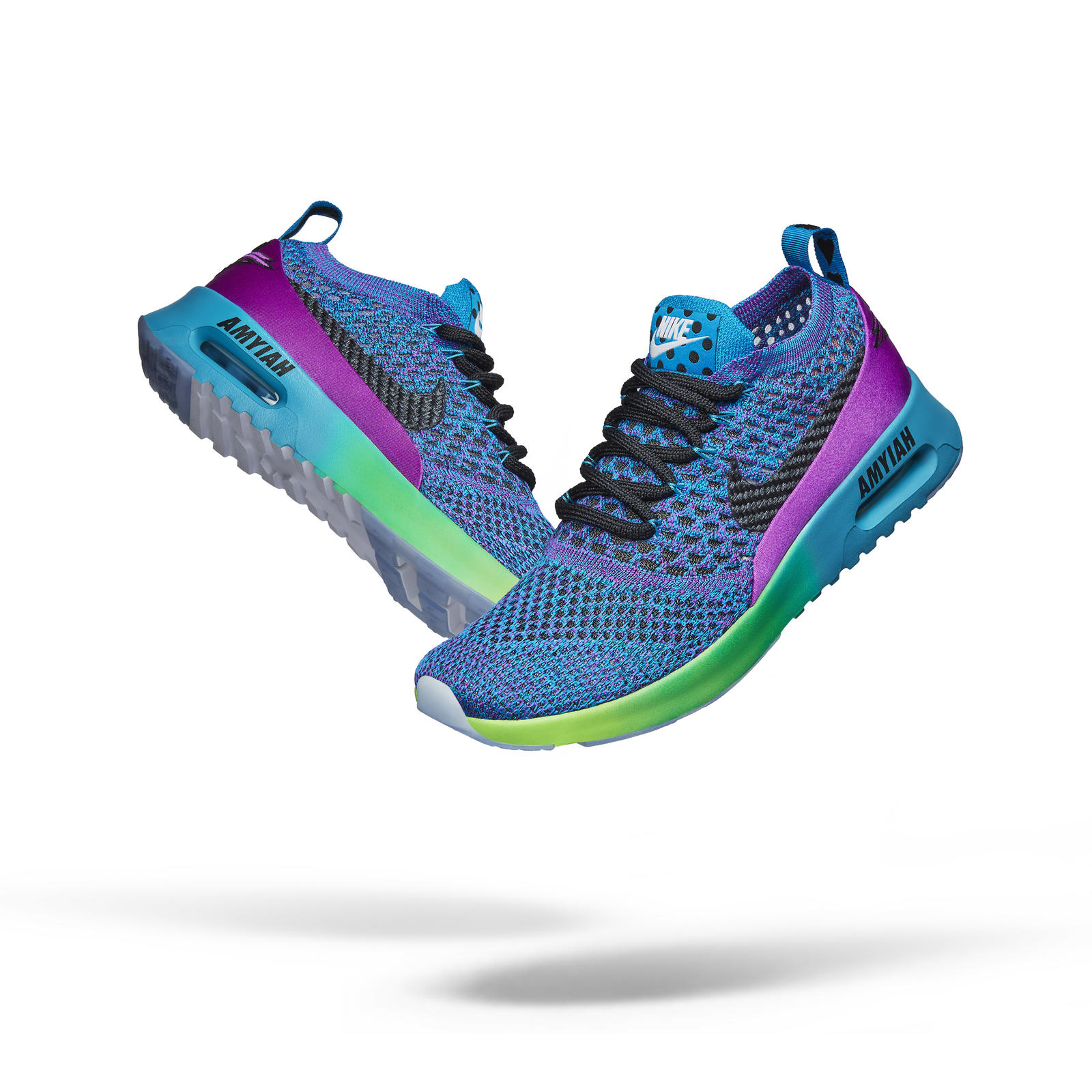 The outsole reads “Stay True to Yourself." 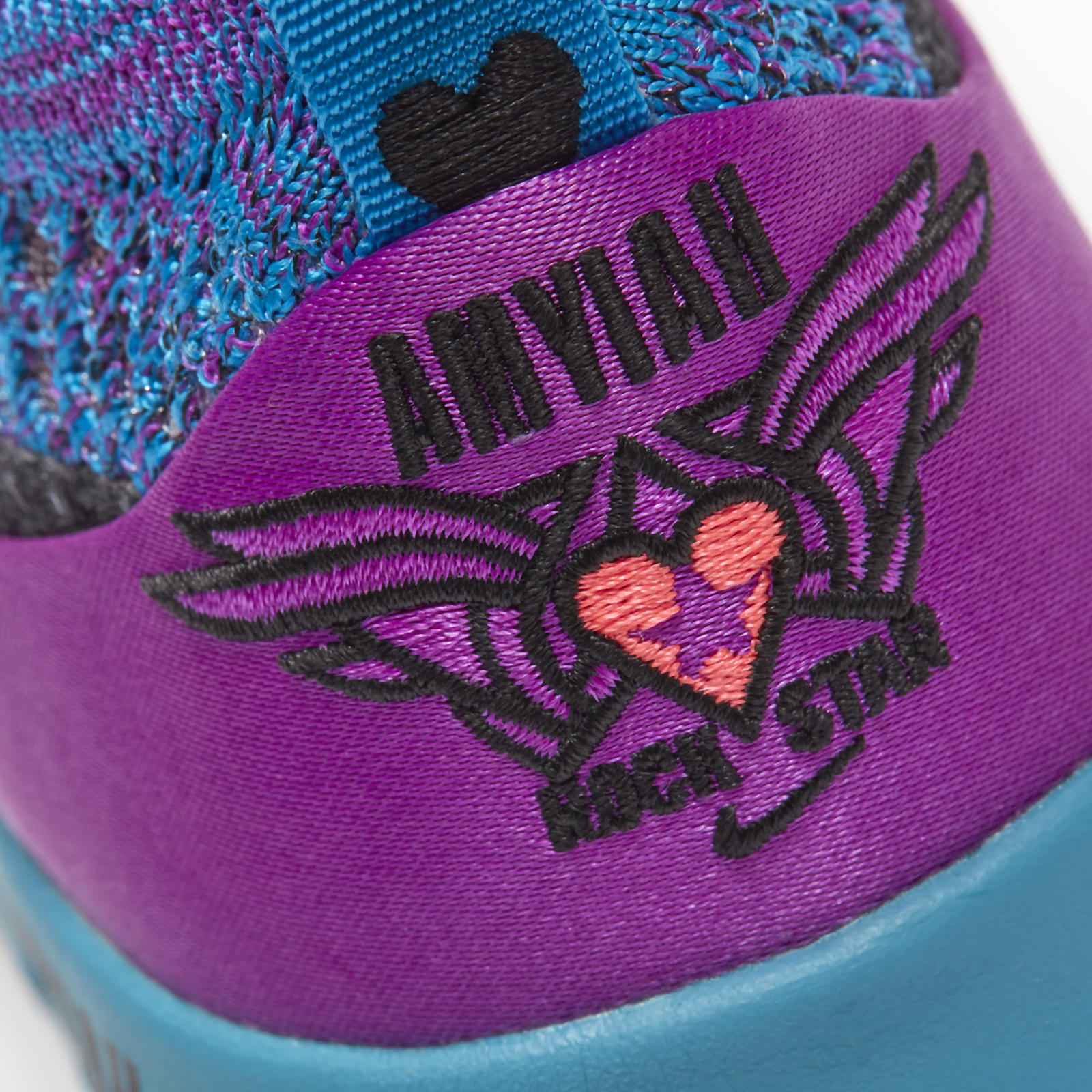 The heels feature a heart with angel wings (for her mom, whom she considers her guardian angel) flying over the words “Rock Star.” 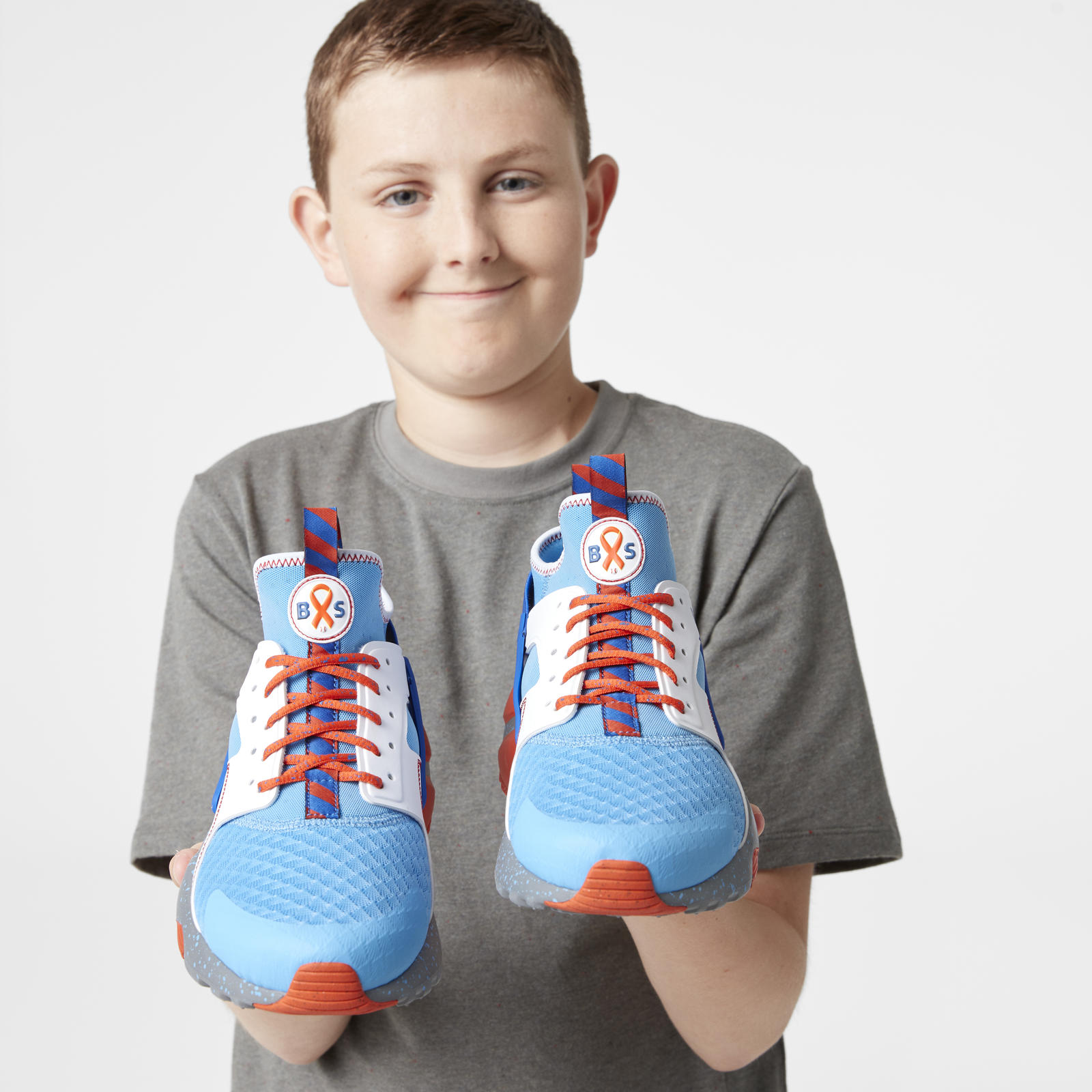 The prominent display of orange is a nod to Sparkman's favorite baseball and football teams. 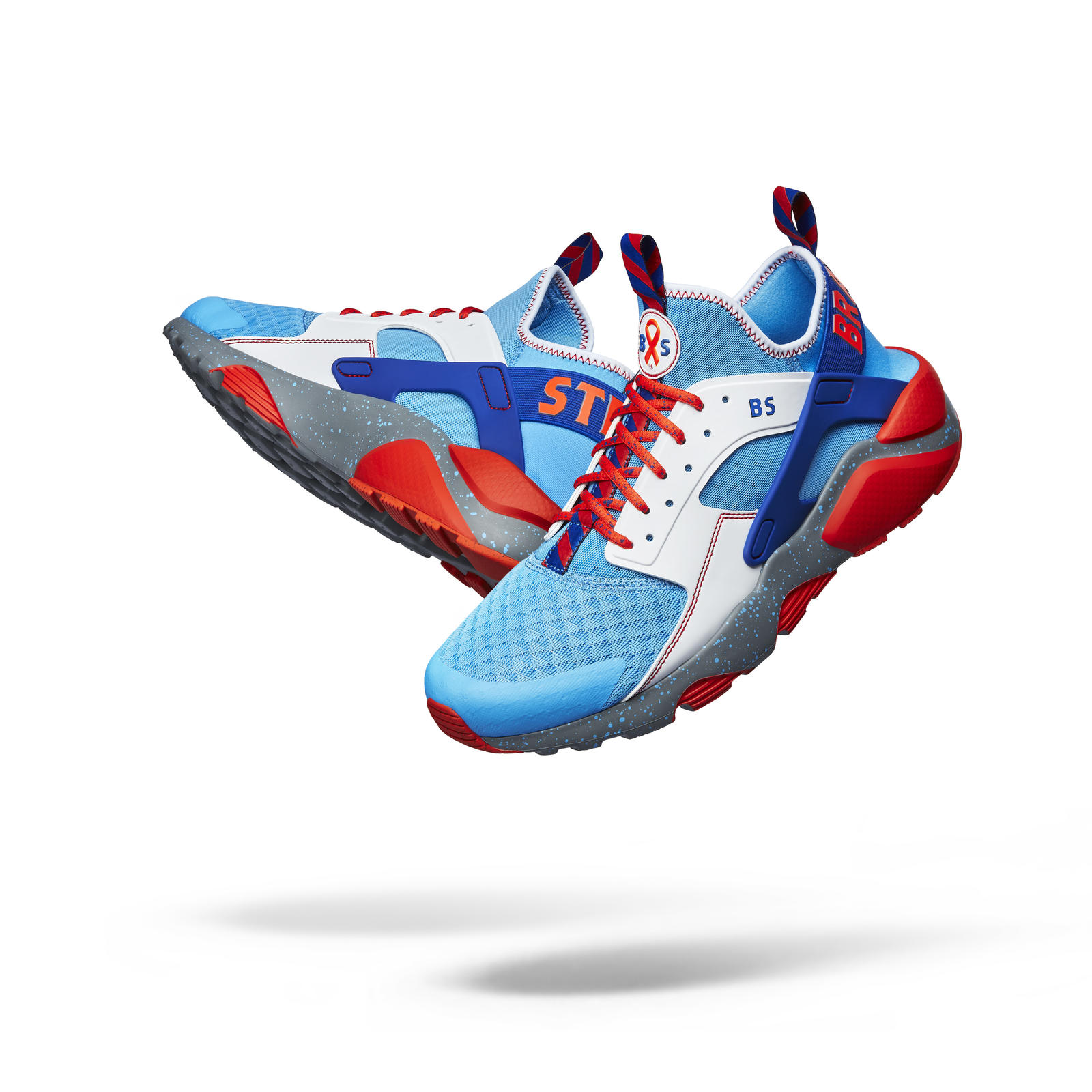 He's an avid baseball player who hopes to play professionally one day. His shoe is a tribute to the game and features red baseball stitching. 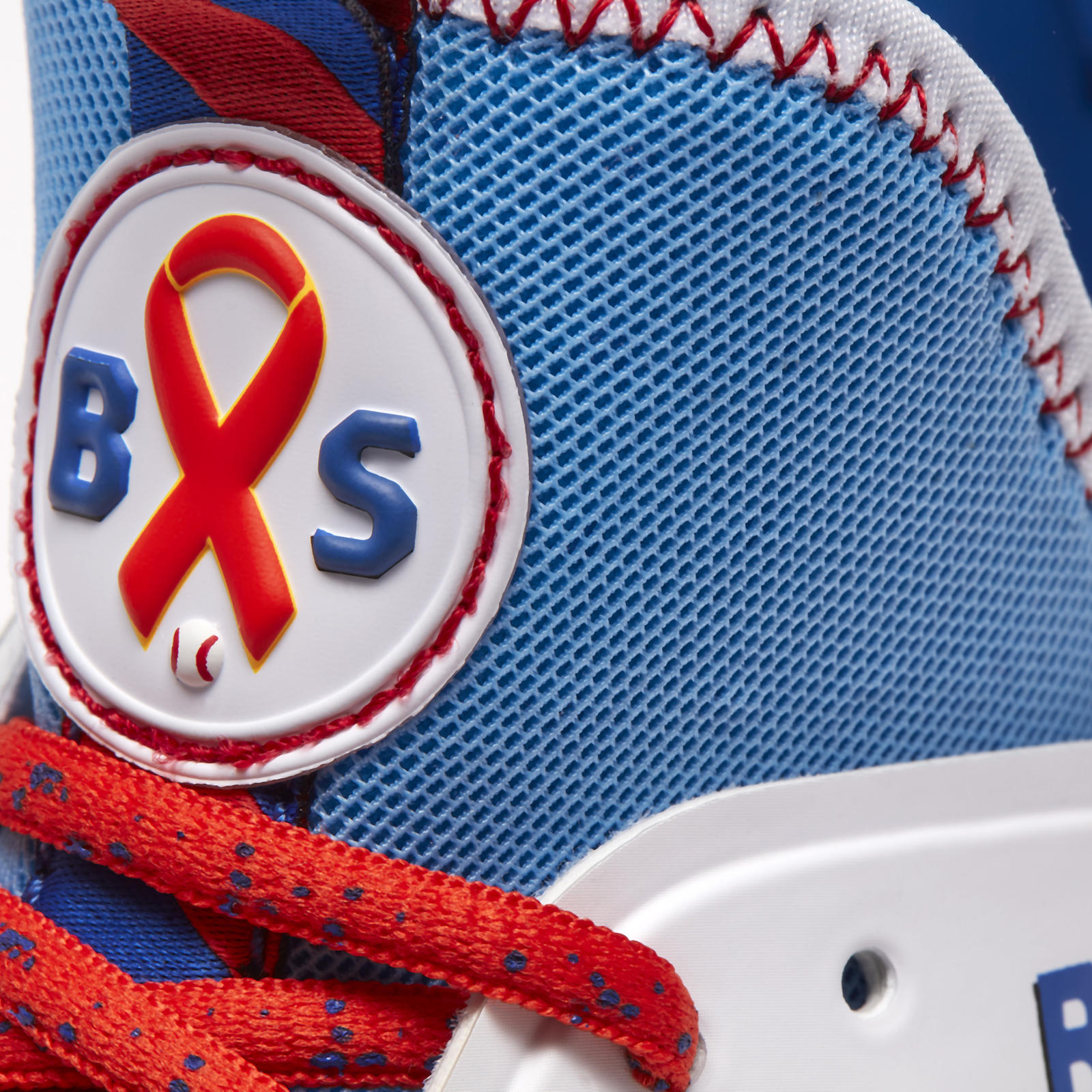 His logo, initials and the words “Brayden Strong," which describe his playing style, also appear on the shoes.

The 2017 Doernbecher Freestyle Collection will be available beginning November 18 with 100 percent of the proceeds from the sales of the collection going to benefit OHSU Doernbecher. Adult and youth sizes will launch in SNKRS, and the full apparel collection will launch on nike.com and at select Nike retail and partner stores. Learn more about this year's patient-designers here.